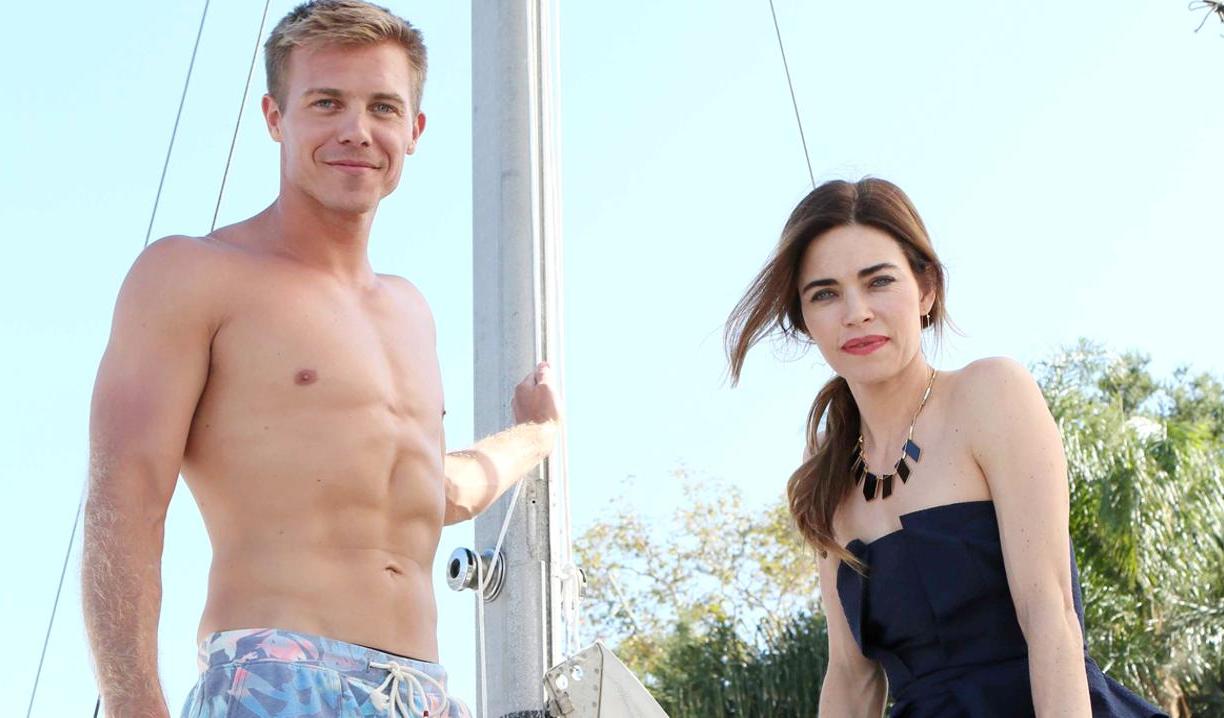 The overall look and feel of “Y&R” has improved under Mal Young (including the restored Chancellor mansion), and some of the stories have definitely been more engaging – I’m actually enjoying tuning in. The tide is very slowly turning on social media back to discussing the storylines and characters as opposed to just bashing the show as a whole. What continues to bother viewers, however, is the storylines still being dragged out too long, lack of story for certain characters, and main players who are behaving unlike themselves to enable Pratt’s plot-driven writing style. Someone needs to do a history lesson on Adam and Jack and adjust accordingly. On the plus side, though Victor’s web spreads ever wider, his machinations seem to spark interest, and the latest twist with Bethany was no exception. In the couples department, Philly is keeping debate lively, while Tricky got even hotter. Thoughts:

Chloe with the flow.
Chloe’s return hasn’t really had me doing cartwheels, which is disappointing. The big build up associated with her being Victor’s accomplice to frame Adam has just kind of fizzled out, and few are interested in a Kevin/Chloe do-over, or a Chilly reunion, which was one-sided to begin with (he slept with Sharon on their wedding day). Chloe was at her most interesting flirting with Detective Chavez, and in the Chance and Ronan days, so maybe that’s the way to go if she’s staying on canvas.

Romantic interlude.
The last blog mentioned a possible twist in the Luca and Victor storyline, which proved to be Luca getting to Travis first with some pre-emptive warnings and a lie about Victoria designed to keep him from returning to Genoa City and, presumably, exposing him. This put the pressure on Victor, Nick, and Phyllis as Summer’s wedding day nears, and they enlisted Victoria’s help in getting Travis onside. They played some good beats here, with Vikki telling Billy about Travis’ invitation and them commiserating about not being able to let someone you love go, and Phyllis being the one to convince Victoria to go to Travis. ‘Tricky’ has genuinely captured viewers’ hearts, as there was quite a lot of anticipation for their reunion on the boat. I don’t think anyone was prepared, however, for the heat this pair would bring on the Blue-Eyed Beauty. Next level! And if Victoria goes home alone again…talk about leaving us wanting more!

The Newman web.
The out-of-the-blue twist of Victor being in cahoots with Bethany at least served a couple of purposes – to get Adam (and Chloe) free of the frame-up mess, and to add a new element into the Philly affair, which continues to stay hidden based on the questionable concept of Jill being able to intimidate Phyllis. Yes, it was another week of Slack Jack lecturing Phyllis for being who she is, and being insulted by Victor and doing nothing about it. Ashley and Jill both acknowledged that Jack had changed, but tried to put a positive slant on it. Fans disagreed:

@malyoung @YRInsider @CBSDaytime .. Can Jack get his man parts back sometime here in the near future.. Please and Thank you!! #YR

I see Jack continues to be a wet blanket. A really wet, boring, moralizing blanket. #YR

Ashley deserves more to do than put in her two cents about other peoples’ marriages. It would also be nice if Jill had another focus besides meddling, which doesn’t seem to be quelling Billy and Phyllis’ feelings for one another anyway. As for Cane getting involved, it will be interesting to see if he actually tries to help Jill, or warns Billy about what she’s up to. Either way, I still can’t understand why he wants any part of it. I know, broken record.

Victor’s plan also led to Dylan being reinstated by Paul, who was scolded by Kevin for being negligent. So Paul, who seems on the verge of his head popping off all the time now, listened to Kevin but not Dylan? Anyway, his gun and badge were returned and they marveled together over all the planted evidence in Bethany’s room.

As for Adam ‘snapping’ in prison, hallucinating and attacking a guard…mess. He was fine last week when both Chloe and Connor visited, not to mention he’s supposed to have the most mental fortitude and cunning of any man in Genoa City, many of whom have withstood jail time just fine, including Adam himself. He was also completely lucid 10 minutes after the attack. Plot-driven drivel.

Sharon’s place.
Everything that happens in this house now feels like filler to distract from the elephant in the room – Sharon and Mariah are hiding a secret of epic proportions that’s been dragged on beyond all reason. So, the little drama with Kevin, the flowers, and Sharon telling him to open his eyes, and Mariah patching up Shylan after their spat…thanks, but no thanks. Also, Mariah’s awkward encounter with Kevin at Crimson Lights? Give Mariah a new storyline.

Friday notes.
Nick took on Victor and clearly wasn’t buying his innocent act. With Adam not getting out of jail now, there’s little doubt Nick and Chelsea will commiserate about Victor… I was expecting follow-up on Neil’s parentage this week, but nothing…

Anticipated twists in Neil's past...

Daniel returns to a parallel...