Deconstructing Y&R: Nothing is as it seems in Genoa City…duplicity can be fun 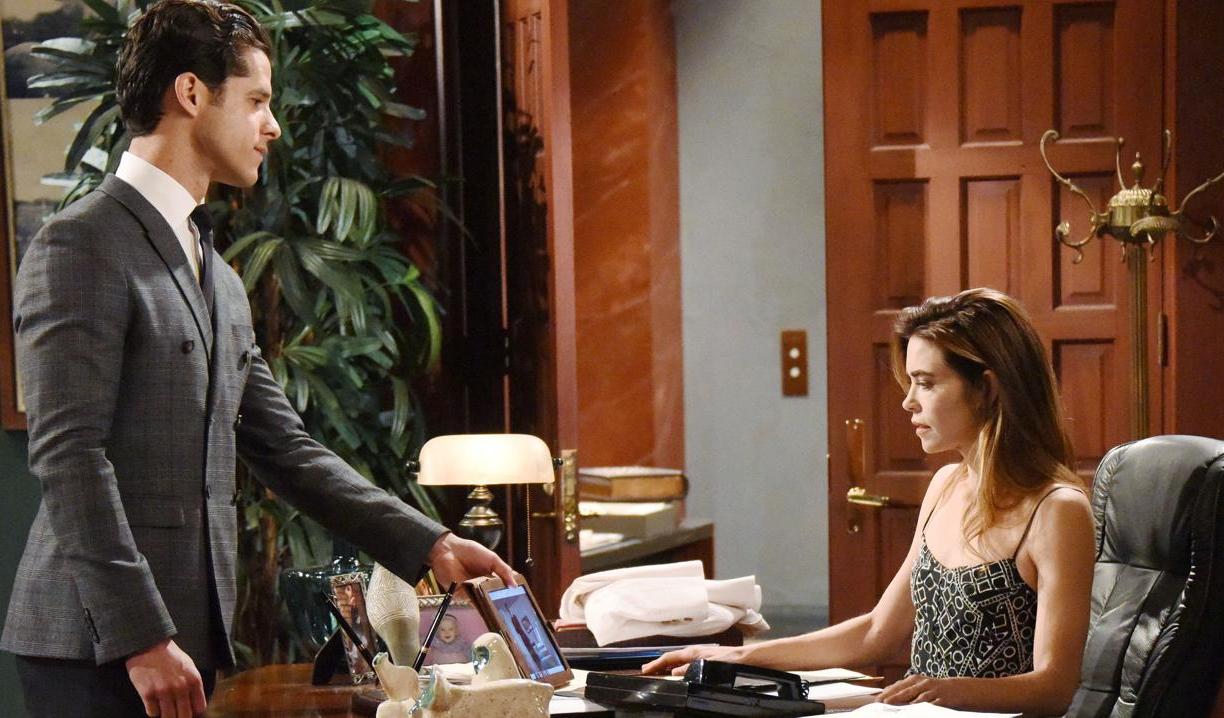 Deception is definitely the name of the game in Genoa City lately, and it’s certainly making things interesting. We have Victor working Meredith, Ian trying to scam Adam and Michael, someone setting up Adam, Hilary lying to Devon and the press, Luca possibly deceiving any number of people, Travis misrepresenting himself on the heels of Victoria doing the same, Sharon and Mariah keeping a huge secret, Billy pretending to have a girlfriend, Phyllis and Billy going behind Jack’s back, and Nick and Phyllis plotting to fool Summer’s new love. That’s just off the top of my head. Whew! Thoughts:

Philly and Phick.
As mentioned in the last Deconstructing Y&R, it’s not a bad thing that the reveal of Phyllis and Billy’s affair is playing out slowly. It’s been kind of fun to see Phyllis do a slow burn whenever Billy appeared with Bethany, and when Bethany let loose with her little zingers. Hehe. Of course things took a more serious turn at week’s end after Phyllis paid Bethany to ‘shut up and go away’, hehe, and Billy told Phyllis they needed to tell Jack they were in love so they could be together. Phyllis’ tortured reaction was spot on, but I’m with Billy – this stuff cannot be denied – the chemistry between them is off the charts! Phyllis also had to deal with Luca this week, which put her back in Nick’s orbit. Hallelujah! Someone over there is paying attention to what viewers want as they not only acknowledged – finally – that Nick and Phyllis had been married, but also mentioned Daniel’s existence. Let’s hope it’s not years before it happens again! Viewers loved seeing Phyllis with her claws out in the scenes with Luca, and were also happy to see Phyllis and Nick interact:

LOVE this Nick & Phyllis scene. Finally it is remembered they have a daughter! YES! #YR #History @YRInsider @CBSDaytime @malyoung

Trust issues.
As for Luca and his machinations, it’s been an intriguing week with him as we really aren’t sure of his actual agenda – or if he’s even sure of his agenda, as it sometimes seems to be fluid depending what situation he’s in. Does he really want to be part of the Newman family? Does he merely want a way in to take over Newman Enterprises? Is he trying to take it over for himself, or perhaps to finally impress his own father even though he claims to hate him? Maybe he doesn’t want to take over, but just be one of the gang. Who knows! Pretty much anything is possible with Luca at this point. That said, the more he’s in proximity with Victoria, the more viewers clamor for them to hook up, as his pairing with Summer just isn’t compelling enough. However, many viewers are shipping Victoria with Travis the bartender, who is also apparently an oil commodities trader from Wall Street, and so the groundwork for a storyline is already laid for the writers, if they could only see it. Send Summer off to New York with Kyle, and let Luca mix it up with people on his own level.

Walworth blues.
Adam had better see through Ian’s transparent plot to escape from prison (why else would he insist on going to court?) or we’ll know they’ve totally lost all concept of who Adam is. He was one of the most shrewd, cunning, and devious characters ever on “Y&R,” so to depict him as being duped by a snake-oil salesman type like Ward would be most insulting. In fact, I’m surprised Michael couldn’t see through Ian right away as well. As for Victor, well, his kids have accused him of all sorts of nasty things – to be expected since he vowed revenge on them and sold Brash & Sassy out from under Victoria – and his only solace was knowing he could punch the wall and get a romp with Meredith in the infirmary, but thanks to Ian, he doesn’t even have that now as he’s been sent to solitary. It will be interesting to see if Ian’s ranting about Victor got to Meredith, or if she’ll be more sympathetic toward him than ever. While there is a whole lot of ridiculous going on in that prison, watching Ian bait people with that big ingratiating smile is pure entertainment.

Protocol panic.
The whole lab storyline has never been a favorite – Hilary’s behavior is over-the-top, Neville is quirky but doesn’t work as a love interest, Ashley should be at Jabot, and Abby only comes to the lab to whine. That said, the bit with the protocol being a potential disaster and Hilary being on the verge of going back into a coma has made things more interesting with her story, as suddenly she has a vulnerability. Of course, some would like nothing better than to see her go back into a coma, especially after she lied to Devon about the drug being ready in the fall, and then it was revealed that she paid off the lab tech who committed suicide and is willing to let Neville hang for it. In typical soap style, just as Lily decided she’d had enough, and marched over to tell Jack what Hilary was all about, Hilary fainted. Lily and Cane presumed she was faking at first and gave some good reactions. Anyway, I’m hoping Ashley will get to the bottom of everything that’s going on.

Get it out.
While Stitch’s explanation to Max about his brain tumor and surgery made for a teary moment, Abby showing up, and Max throwing his arms around her after she declared they were a family, just felt like ‘trying too hard’ to make viewers buy into…something.

The weight of secret-keeping.
I don’t know what to say about the writers having Sharon making the big crazy eyes all the time again, and her trying to circle the wagons and keep Dylan close and Nick away. Most viewers seem to feel that Sharon continuing to keep this secret after Sage died was taking things too far, and it’s even less believable that Mariah would keep it. Of course the reveal will be huge and dramatic when it finally comes, but at what cost to the characters involved?