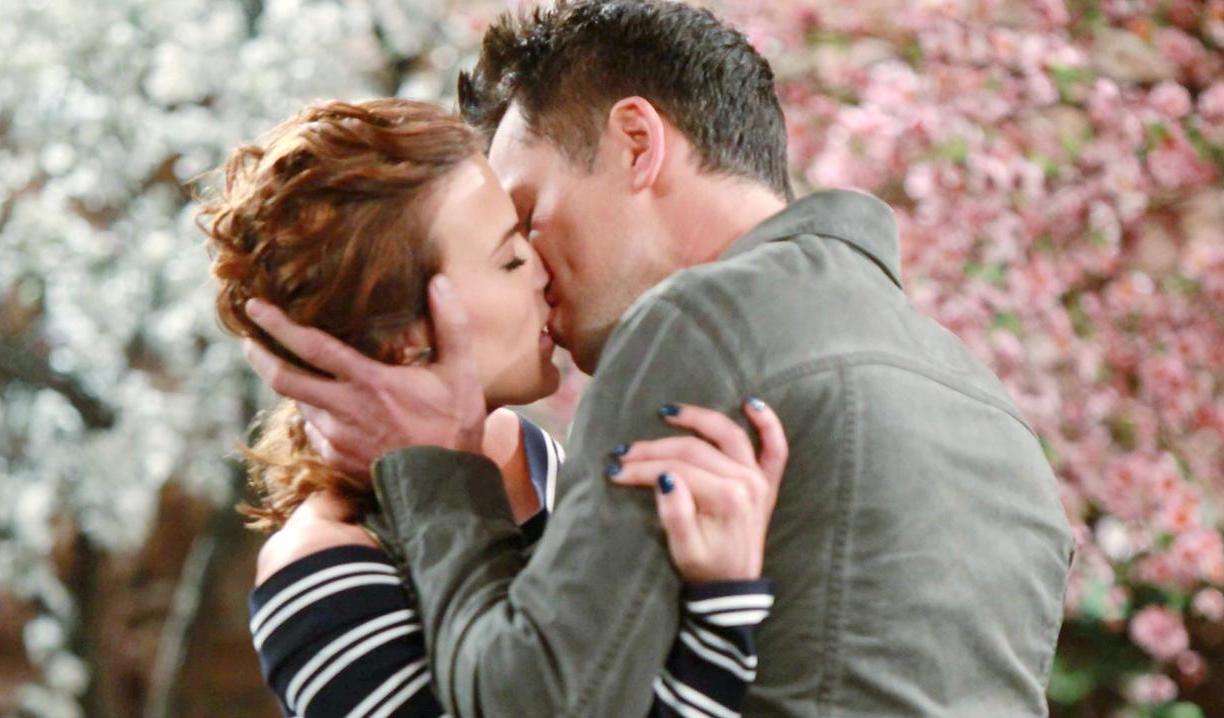 There was a lot of hype surrounding the baby secret and Nick finding the journal, but it amounted to a diversionary plot point involving Adam. The Billy/Phyllis and Victoria/Travis romances continued to be hot topics, and the clashes between Sharon/Mariah, Phyllis/Hilary, and Hilary/Lily spiced things up. Thoughts:

Getting help.
Stitch, painfully but resignedly, signed Max into a long-term youth psychiatric facility, and Paul mentioned Ricky, which was a nice use of history. Stitch made amends with Abby, thanked her for standing by him, and they went on to share a number of scenes of the heartfelt variety that felt like the writers campaigning for us to root for them. Look here! Their love is real! Their marriage is rock solid! Aren’t they cute?! Bleh. They can write these scenes until the cows come home, but it won’t change the fact that Stitch has more chemistry with Ashley in a quick ‘how are you doing’ scene at the hospital than he’ll ever have with Abby. Speaking of his wife, when do we get to see her real feelings about losing that baby because of Stitch’s son? Her resentment seemed to last all of five minutes.

No last names.
As mentioned in the last Deconstructing Y&R, Travis and ‘Tori’ are definitely another hot pairing, though their passion is a little more understated than that of say, Phyllis and Billy. Victoria freaked herself out a bit, testing the waters in a romantic world that doesn’t involve her ex, which was very relatable. Travis, for his part, is proving to be patient and sweet. I’m betting just as Victoria starts to get comfortable spending time with Travis, Luca will convince ‘Dummer’ to use it against her at Newman Enterprises and throw a monkey wrench into the works. Seriously though, if they have Summer take over NE…

I’m right here.
Phyllis answered Jack’s question about whether or not she’s drawn to Billy honestly, admitting that yes, they’re kindred spirits etc. What she omitted was just how drawn to him she’d been mere hours before – about as drawn as you can get! Hehe. Anyway, she was sufficiently horrified by her tryst that she sentenced herself to continue doing time as Jack’s wife. Jack, meanwhile, is being sucked in by the oh-so-friendly Hilary, who clashed with Phyllis in a rather satisfying ‘battle of the bitches’ type moment. Phyllis, probably on edge and feeling not a little guilty, won the round by bluntly telling Hilary to shut it or she’d shut it for her. However, if Hilary sniffs out this thing going on between Phyllis and Billy…it will be on. Billy, meanwhile, was restless after his interlude with Phyllis and sort of prowled around town until he ran into her at the Club, where he growled his agreement that what happened would ‘never’ happen again, in such a way that suggested it most definitely would happen again. He later failed to convince Ashley that there was no one special in his life, and when he came upon Phyllis in the park it was all about getting her to see that what’s between them is real, punctuated with another forbidden kiss. The bodice-ripping push and pull between these two is positively combustible – let’s hope the writers don’t screw this up!

Now and forever.
Chelsea referred to her fashion line as ‘my company’ and Adam corrected it to ‘our company’, and I cringed a little for him. They then discussed the threat of Victor before Chelsea produced their old wedding rings and they gussied up for an impromptu vow renewal. All very romantic; there’s no denying it, but for the love of all things soapy, can the writers please give Adam back his testicles, his brain, and his backbone, because this clone just isn’t cutting it!

The D word.
Viewers were wondering which man Nikki would reach out to for support this week, but the ‘old friend’ mentioned in the spoilers turned out to be Katherine. The chat with the plaque in the park, and later Dylan, seemed to renew Nikki’s strength and resolve…so much so that she made plans to divorce Victor. Michael, who had newly decided to make a return to law after a cute couple of scenes with Lauren, gave Summer and Victoria a heads-up about Nikki’s impending legal move. Summer whined that Grandpa would be devastated, and Victoria snapped at her to get real, and predicted hellfire and brimstone would rain down. Fed-up Victoria is fun!

Without family.
Over at the state pen, Victor had a ‘moment’ remembering, and reminding viewers of, his painful past with his own father, Albert Miller. It will be interesting to see how, or if, this flashback affects how Victor proceeds with his own children. In the meantime, Nikki’s divorce maneuver may play right into his plan to manipulate Meredith, which had progressed nicely by week’s end, as they were kissing and she couldn’t stop thinking about him. I kind of feel bad for her when he clinks off to his cell smirking about her playing right into his hands, but then again, everyone warned her! Ack!

People are going to get hurt.
Mariah wasn’t even at Sage’s memorial, yet she was dispatched to go through Sage’s personal things. Oy. Whatever works in that moment, they’ll write it! The scene with Sharon coming clean to Mariah afterward was intense, and a welcome development, but then things went south. Sharon endlessly ‘almost’ confessing the secret is tiresome, and Nick got on everyone’s last nerve running around town waving that journal and whining about Sage ‘keeping this secret’ from him. Adam being accused of murdering Constance was a clever little diversion from the real secret, and Dylan immediately announcing the exhumation of her body, along with Nick barreling into Adam’s penthouse demanding to see Adam’s letter, made for some comic relief, but let’s hope this situation is quickly resolved, if for no other reason than it’s painful to watch Clone Adam lay down and take this crap. Ultimately, the most interesting new element of the baby secret story was the inclusion of Mariah, who feels tortured by the truth she now knows, which further complicates things for Sharon, whose life is a veritable minefield at this point. Love Mariah telling it like it is to Sharon! Viewers reacted on Twitter:

Drink up or get out.
Baha! Drunk Neil is an ornery old thing, isn’t he? While some are fed up with the likes of Neil and Nikki falling off the wagon repeatedly, it is, after all, what alcoholics do. What’s interesting is that Neil is now heading up a foundation to help others, which makes it particularly messy for him this time around. As Cane tried to reason with Neil, Lily was back at the Club scrapping with Hilary, who seemed to actually be rendered momentarily speechless by Lily’s threat to tell Devon that Hilary is making moves on Jack Abbott. What I don’t understand is why Hilary would want Jack over Devon. Possibly he would be easier to manipulate since Devon is ‘on to her’ and not having it, but given Jack’s outlook on life, it wouldn’t be long before she’d be in the same boat with him anyway. Hmm.