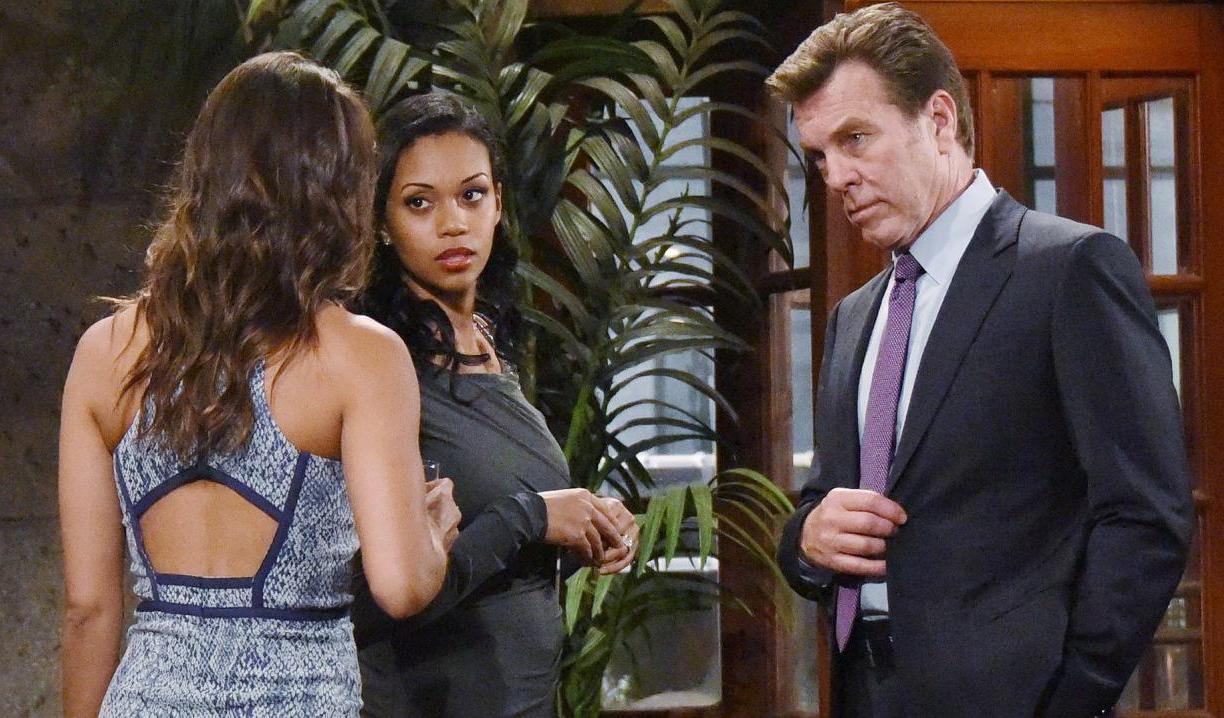 Just a prank.
As mentioned in the last Deconstructing Y&R, Dylan was in a really tough position with the Stitch/Max situation, and it was hard not to feel for him. This week it was Stitch’s pain that drew us in. Imagine having to come to terms with the reality that your child is dangerous and also having to leave him with strangers! Stitch’s raw emotion was heartbreaking to watch. The scene with Max confessing to Ashley was also excellent – how did she keep her composure? Abby was back to being irritating by whining to Stitch, “You blame me, don’t you? You don’t want me here, do you?” But later she comforted him, which made for a compelling moment.

Lying, back-stabbing skank…oh my!
Devon had no sooner confronted Hilary about her behavior when Neil showed up warning that Cane knew he was Hilary’s kidnapper and was set to tell Lily (glad he followed through!). There has been a lot of unbelievable plot developments in this whole storyline and everyone conspiring to keep this secret sort of keeps it dragging on, however it’s brought loads of conflict and confrontations. The week ended with Hilary still not expressing remorse, playing on Jack’s sympathies, and assuring Devon their love was top priority when he confronted her once again. Hmm. I wish Devon could find it in him to do something that would prove definitively where her loyalties lie. Lily, meanwhile, worried to Cane about Devon, and about Hilary controlling them all, which had to be foreshadowing. With all that said, Lily trashing Hilary verbally and throwing water on her was a bit of fun, if only because it set them up as adversaries again, which was entertaining in the past. Viewers reacted on Twitter:

Hot like fire.
Billy saw a lot of action this week between fighting with Jack about Fiona, Victoria threatening not to let the kids stay at his place, and that stuff with Phyllis of course…but we’ll come back to that. Billy remained remarkably unfazed throughout his numerous confrontations, and it’s sort of unclear whether he’s actually in self-destruct mode, or if he is just finally coming into his own and becoming comfortable in his own skin. By week’s end, Fiona (who was quite a hit with viewers) warned Jack about the connection between his brother and his wife, and of course he then caught them holding hands in the park. Jack saw the writing on the wall, and so he should have given his history with Phyllis. Anyway, Phyllis showed up on Billy’s doorstep to tell him they can’t be around each other anymore. Typically after someone utters those words on a soap opera they immediately give in to their feelings and wind up in a passionate clinch, and this proved to be no exception. Billy moved in close to Phyllis and in that ridiculously sexy low voice said, “You want to be here with me,” and it was on. They wound up on the stairs and no one could wait for the next episode, which delivered some smokin’ hot scandalous love-in-the-afternoon! Their chemistry is off the charts; I haven’t seen viewers this excited by a new pairing on “Y&R” in a long time. Of course some hate it, but either way it’s a win because it’s making fans genuinely feel something intense.

Tori and Travis.
After her scuffle(s) with Billy, Victoria was once again drawn back to Hank’s Bar…and straight-talking hottie bartender, Travis. But wait, he’s not just the bartender, he’s the owner, which presumably makes him more acceptable…someone who might even get a smidge of approval from Victor. Of course there’s a chance Travis is not on the level, and is working to ingratiate himself because he knows she’s a Newman. Victoria, for her part, is still deceiving him about who she really is, which I sense won’t go down well with him when he eventually finds out (supposing he’s who he seems to be). Complicated! Either way, they’ve progressed to slow-dancing and Travis even went in for a kiss. This is definitely shaping up to be another hot pairing.

Daddy issues.
At the state pen, where Victor holds court for all comers (so much for refusing visitors), he continues to manipulate. He got Meredith to reach out to her father (and was able to stand there and listen through the door to her phone call!), which was clearly part of a bigger plan, and then he worked on Adam. Frankly, I’m as puzzled as Victor as to why Adam hasn’t made a move at Newman yet. Why have they watered-down his character so much? Adam was one of the most cunning, calculating characters ever, who would go to twisted lengths where Victor and his company were concerned. Now he is sort of henpecked and almost boring, and his idea of besting Victor was to tattle to Meredith’s father. Would love to see Adam return to his former controversial ways…and soon. Perhaps Victor ‘gunning’ for him and Chelsea will lead to it. Here’s hoping!

Breaking News! Justin Hartley’s pilot This Is Us picked up

Why the push?
Sharon had her hands full with Nick and Mariah this week, who both noticed her ‘strange behavior’ – wanting Nick to bond with Sully. Now that Mariah has ditched Kevin for getting sucked in by Natalie, and moved back into Sharon’s place, here’s hoping new clues come to light about Sully’s true identity. The fact that Sharon is keeping the secret at all is unsettling, and the longer she keeps it, the worse it gets.

Deconstructing Y&R: Too many baby...