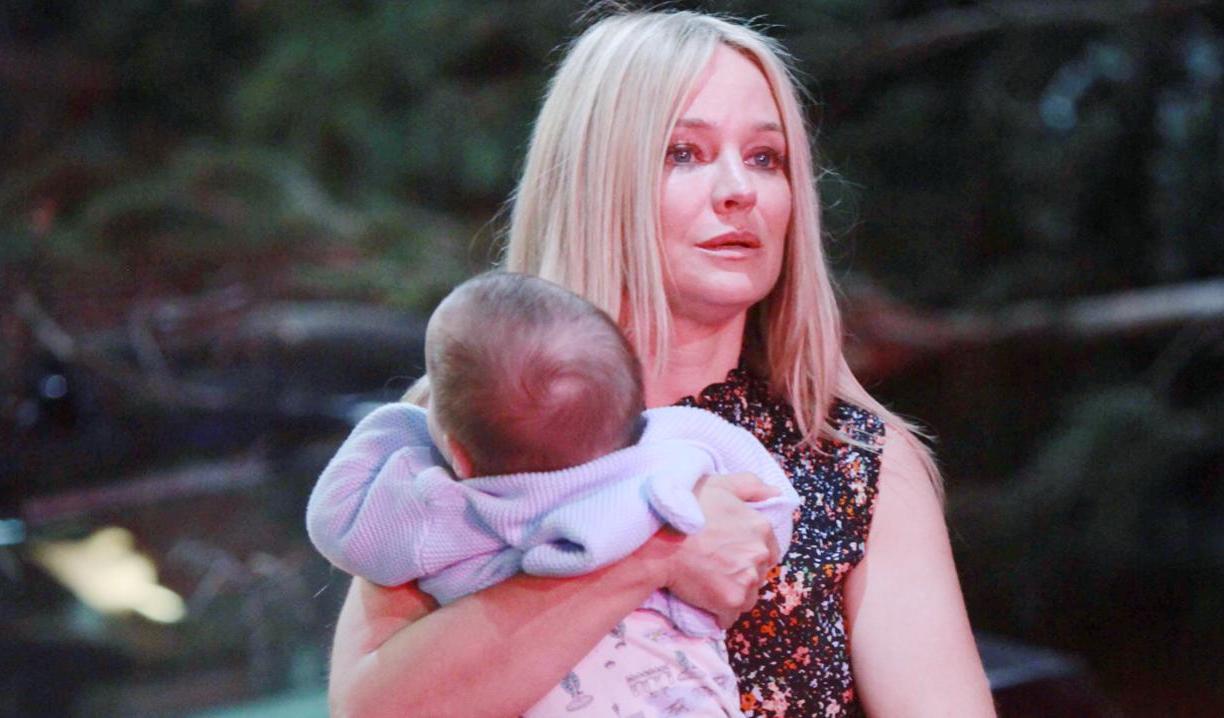 It was an eventful week in the secret storyline, and it was the biggest talking point with viewers, some of whom are finding the soap a little dark with the deaths of Abby’s baby and Sage coming so close together. Thoughts:

Champagne, caviar, and zzz…
As mentioned in the last Deconstructing Y&R, Kevin is being drawn in by the lure of Natalie and the money, and is seemingly putting his relationship with Mariah in jeopardy. Natalie drunkenly trying to seduce Kevin was funny, but there really isn’t a ton of chemistry there. Those were good scenes between Michael and Mariah, as she opened up a bit about her feelings for Kevin, but it feels like the writers should give Mariah and Kevin a go or just let her move on to something else as it’s been so long in coming.

Do you love him?
Kyle showed up in Genoa City this week, and then promptly left again. Both his arrival and departure felt awkward. He appeared at Newman Enterprises with Victoria just as Nick was blustering about Summer’s relationship with Luca, and then left after a brief sit down with Summer that established she had moved on. He planted a kiss on her that looked as though it was probably supposed to be lingering and memorable, but seemed curiously devoid of any real passion.

You were right about everything.
While Victor doing his family dirty from behind bars is fairly entertaining and not unexpected, the bit with Nikki showing up and pleading for his forgiveness was not enjoyable to watch at all. What happened to the absolute certainty she had at his trial that they were doing what they needed to save him from himself? The stuff with Victor and Meredith has become slightly more interesting as more is revealed about her background and she and Victor form a deeper connection, but it hasn’t reached truly intriguing levels yet.

Feeling Brash & Sassy.
Billy using severance pay from Jack to buy Brash & Sassy out from under Victoria was a fun twist. As mentioned, it wasn’t a shock that Victor struck out at her, but it was a tad surprising that he sacrificed a huge division of his beloved company to do it, even if it was her ‘baby’. Eck. As far as Billy’s involvement is concerned, Victoria maybe should have foreseen that having him fired might have unpredictable consequences. Billy, who is feeling suddenly ‘Brash & Sassy’ also seems ready to claim something else he’s been wanting of late – Phyllis. It was interesting that she told Jack that Billy wanted revenge on him – perhaps so viewers would question whether Billy was genuinely into Phyllis, or motivated by his desire to hurt Jack. Elsewhere, Victoria crossed paths with a handsome bartender, who will almost certainly become her new love interest.

I’ll handle it on my own.
Hilary went another round with Neville and Ashley, and though they were able to get her to do what they wanted, she turned it around on them with the wording of her announcement, thus leaving Ash furious and Neville disgusted. Hilary then went right on to her next order of business – schmoozing Jack. Don’t know where that’s headed! In any case, while the clashes between Hilary and Ashley can be entertaining to watch, it’s still unsettling that Hilary changed overnight for the sake of a plot. That said, it will be interesting to see how Devon reacts to Neil telling him that Hilary blackmailed him just like she did Ashley.

The secret is out…or is it?
The big story this week was Sharon, Sage, and the baby secret. Things kicked off with Sharon visiting Patty, who laughingly told her she hadn’t been pregnant in Fairview. This was the beginning of a long chain of events that led to both Sharon and Sage realizing – finally – that ‘Sullivan’ was Christian. This all made for loads of drama; “Y&R” really felt ‘must-see’ for a change, and culminated in an emotional face-off between Sage and Sharon. This is where things took a turn, however, and the plot-driven story-telling became unbelievable, which unfortunately, takes viewers out of the moment. Sage, who knew full well Sharon believed she had given birth, suddenly began accusing her of having known the truth all along. Sharon pleaded her case, but when Sage wanted to take her baby, Sharon used Dylan’s feelings as a reason to refuse her. This, of course, sent Sage storming out the door to ‘tell Nick his son was alive’. As if! There is no way in the world that woman wouldn’t have stayed with her son until she reached Nick by phone. And so the writing was on the wall. Sage went off the road, died, and although she spent a few minutes with her son, would ultimately be denied a lifetime with him, thereby leaving Sharon in the position of having to decide whether or not to, once again, keep a huge secret about a child from Nick. While some viewers were happy to see Sage, who was never a wildly popular character, go, others are hoping against hope that she will haunt Sharon should she choose to keep the secret:

@KellySullivanNY So when is Sage the ghost making her debut? ?? Time to do some haunting. #YR

I hope KS isn't gone yet and Sage haunts the hell out of Sharon. #YR

Abby’s accusations.
Abby opened up to Ashley about her suspicions regarding Max, and later came right out and accused the kid of making her fall. She seemed to be playing right into Max’s hands, as the little psycho ran straight to his dad whining that he couldn’t possibly be expected to live with a person who hated him so much. Stitch promptly got them a room at the Club. Sigh. If this kid can’t successfully tank the marriage, Abby had better watch out as he might try to kill her next!

Deconstructing Y&R: From the highly...

Deconstructing Y&R: Too many baby...