Thursday July 21, 2022: Today on The Young and the Restless, Allie impresses Ashley, Noah finally arranges to meet with Nick, and Lily gives Phyllis an offer that leaves her shocked. 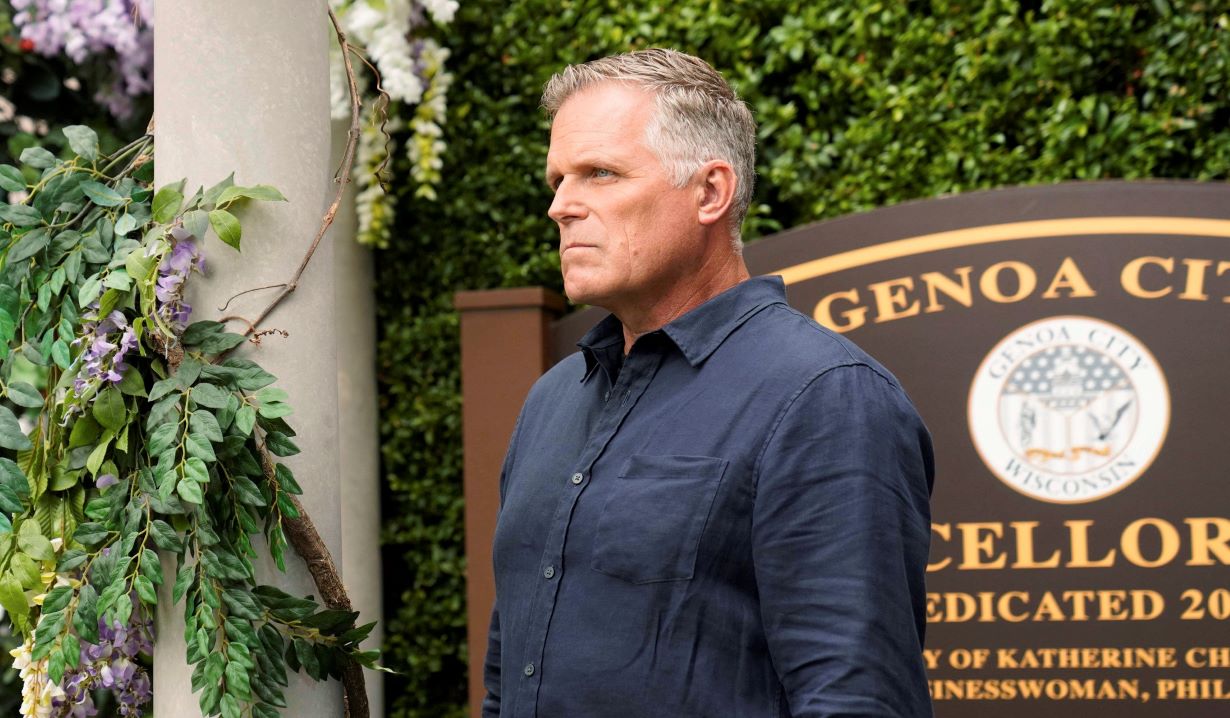 Ashley strolls into the Abbott estate and finds Allie studying her notes. She loves how comfortable she is in the lab already. They are both enthusiastic. Allie admits she was very nervous when she first came to Genoa City. Ashley tells her she’s been a real gift and starts quizzing her about Diane. Sitting down, she says that a few people have come to probe her about Diane already. She understands that she has a lot of enemies, but she doesn’t want to be involved. Ashley doesn’t want to make her uncomfortable, but Diane is very manipulative and scheming. She doesn’t want to see her get used again and assures that her concern for her is genuine. As long as Diane is around, she will continue to inflict pain on the family. With a little prodding, Allie admits that she may seem innocent and naive, but she’s not. She’s not going to let anyone manipulate her, not Diane, Phyllis, or her. 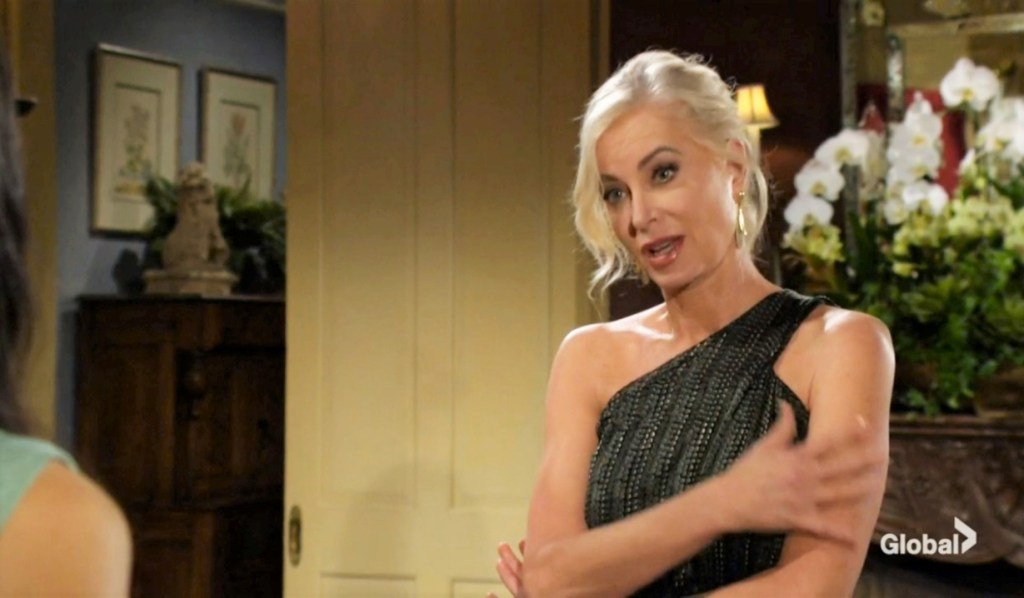 After she changes, Ashley tells Allie she looks gorgeous. She thinks it’s awesome she’s found someone to spend time with and she respects her for being such a strong, independent woman.

At Crimson Lights, Noah fixes the espresso maker while Sharon grills him about Allie. She senses that meeting her has made him happy. He admits he can’t remember ever feeling so comfortable and relaxed with someone. He wonders if what they have could go anywhere. At first they irritated each other and then became friends. This is complicated for him. His mom has noticed he usually dates drama queens and people with a lot of baggage. She assures him that a relationship doesn’t have to be filled with conflict. It would be nice to see him with someone kind. “Like what you had with Rey?” he asks. 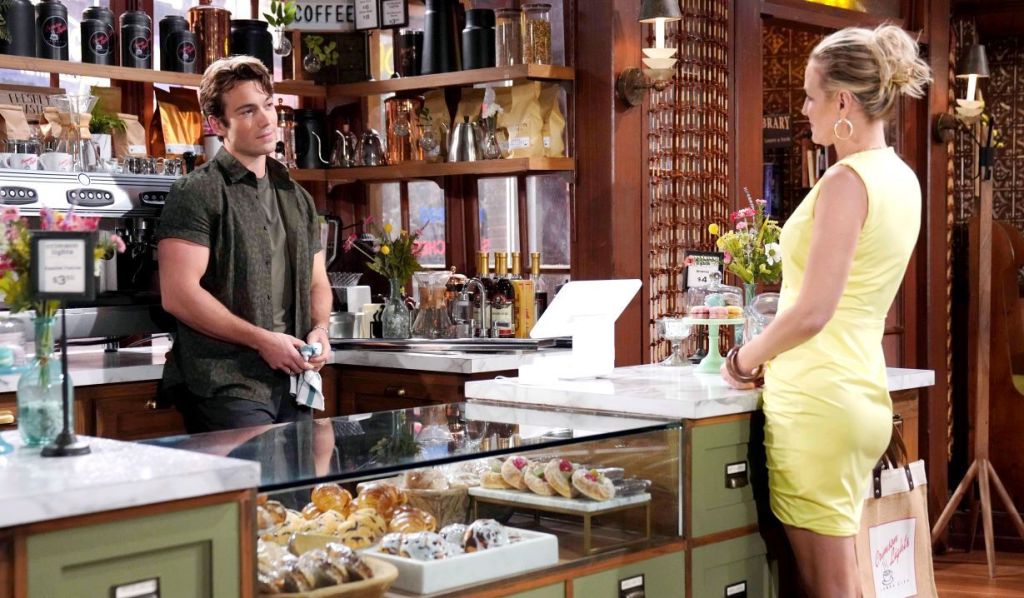 She thinks it’s great he gets along with Allie. Maybe he can skip the angst this time. A healthy relationship sounds appealing to him. Sharon urges him to enjoy the time they have together. That sounds more than okay with him. After Noah finishes fixing the machine, he tells his mom he has a date with Allie tonight. She urges him to call his father to talk about New Hope before that.

Victor finds Adam in the CEO office and asks if he’s reconsidered his decision to step away from Newman. Adam hasn’t. His father reminds him he’s done this before and came back. What would convince him to stay this time? Adam drinks his sister’s water and makes it clear there is nothing that will bring him back. He tells his father that he has ended things with Sally. He adds that he hopes that doesn’t affect her position in the company and suggests they give her a chance. It would be wrong to punish her just because of their personal relationship. Seeing through this, it pains Victor to realize that he would sacrifice himself and his place in the company to save her. Does he hate the family that much? Adam points out there is a lot more than hatred. He thought they had turned a corner. Victor thought so too and Adam just needed to be patient. 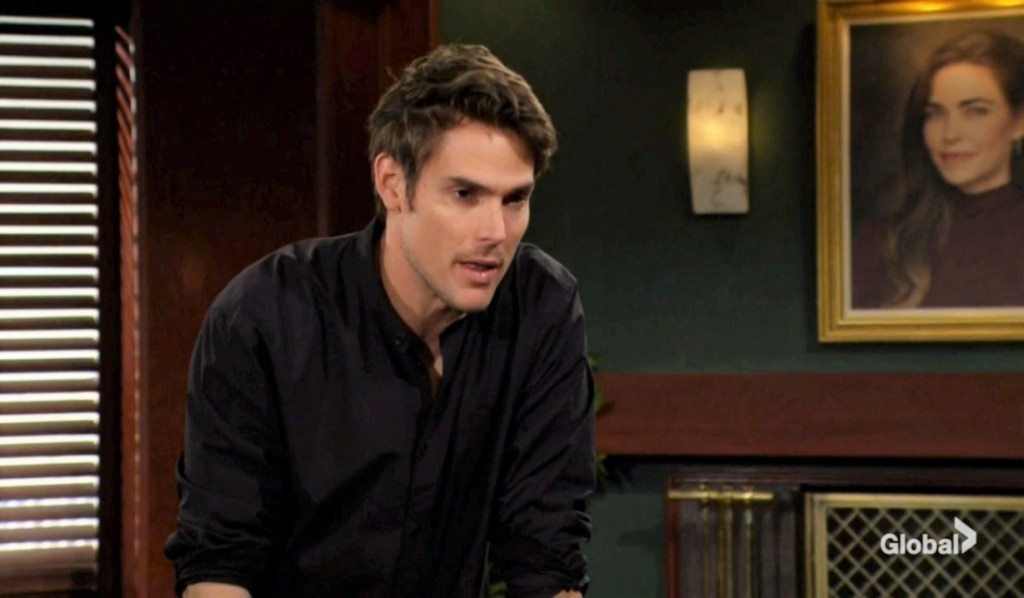 His son complains that he treats him like a puppet and just jerks him around. He’s not taking it anymore. Victor claims he’s had his back and his feelings are upsetting him. Adam tells him that some people can’t go silently into the night after the way they’ve been treated by the family. He warns him that Ashland is planning something. Suggesting that it all should have been ended with the payoff, Victoria couldn’t resist degrading him and taking everything he has. Now he’s got nothing to lose and will want revenge. His father insists that Locke got everything he deserved. “How do you know all this? Have you been talking to Ashland Locke?” Victor asks. Adam isn’t thrilled that’s his response. The Mustache dismisses any threat from Ashland. He urges his son to take some time to come to his senses. Then he will realize he belongs with his family. “I give up with you, Dad. There’s no getting through to you, ever!” Adam declares, moping off.

At Society, Victoria tells Nick that Adam is a dark cloud hanging over Newman. It’s his nature and it will never change. She doesn’t blame him given his childhood and admits he’s been relatively well-behaved lately. But he can’t be trusted. His character flaws will always be the same so there is no room for him at the new Newman Enterprises. Nick nods along. Another thing she knows is that it feels good and right to have him by her side again. 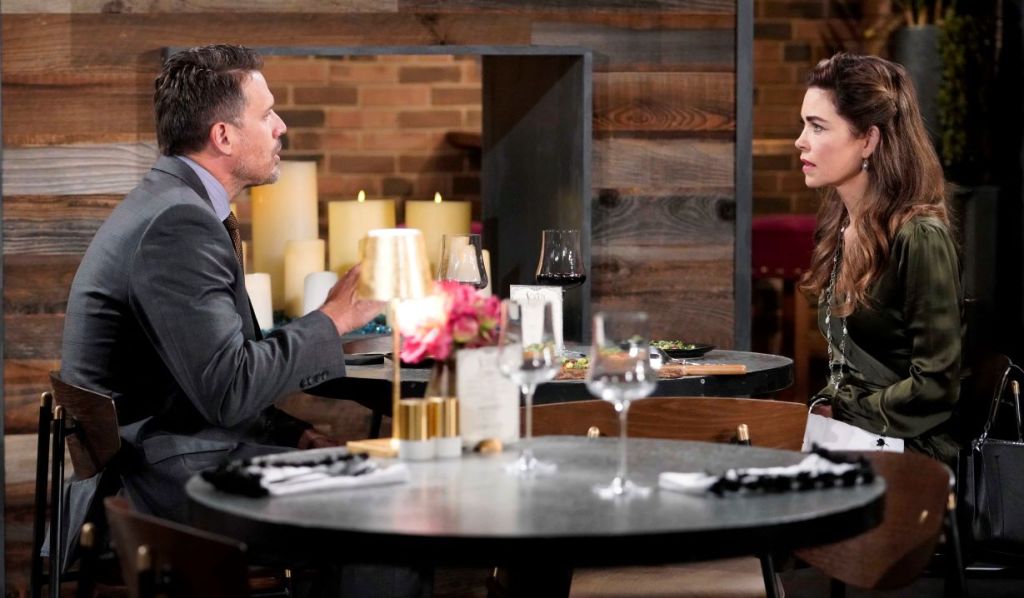 Adam wanders in and asks what happened with Sally. They explain she made a case for herself and will stay for now. He tells them they made the right choice and then encourages them not to worry about his personal life when they should be concerned about the hell that will be raining down on them. Having Locke arrested for seeing his son was vicious. They take no responsibility for that or object to it. Nick assumes he’s been speaking to Locke. Adam admits it. He was hoping that he was concocting some kind of corporate maneuver to go after the family, but he learned that he’s not out for revenge, he’s out for blood. Nick needs more of an explanation. His brother says he’s pretty messed up and had a chilling look. It’s unclear what he will do but thinks they should be on guard. Once he leaves, Victoria and her brother worry. He thinks Locke has gone over the edge. She refuses to believe he could be dangerously violent but he suggests she move into the ranch. Victoria won’t let Locke scare her. Noah calls and asks his father to meet. She insists on staying on her own and takes a walk.

More: Will Sally hook up with Nick?

Nick arrives at Crimson Lights to meet his son. Sharon gives them some space and Noah announces this is a patio talk. Once they step in, Noah asks his father to take a seat. Nick guesses he’s not going to like this. 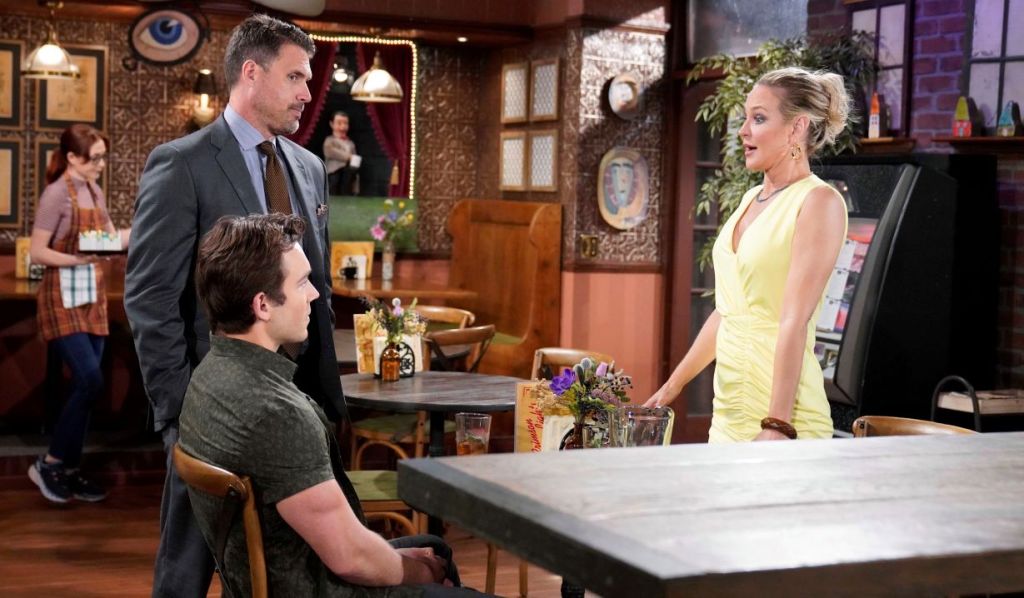 When Jack strolls through the park, Phyllis stops him. They have some awkward chit-chat. Before he can walk away, she wants to talk about his sister. Ashley told her that she has the same stance as she does on Diane. She wants him to know that Diane was never more important than her feelings for him. He can’t discuss this and walks away. 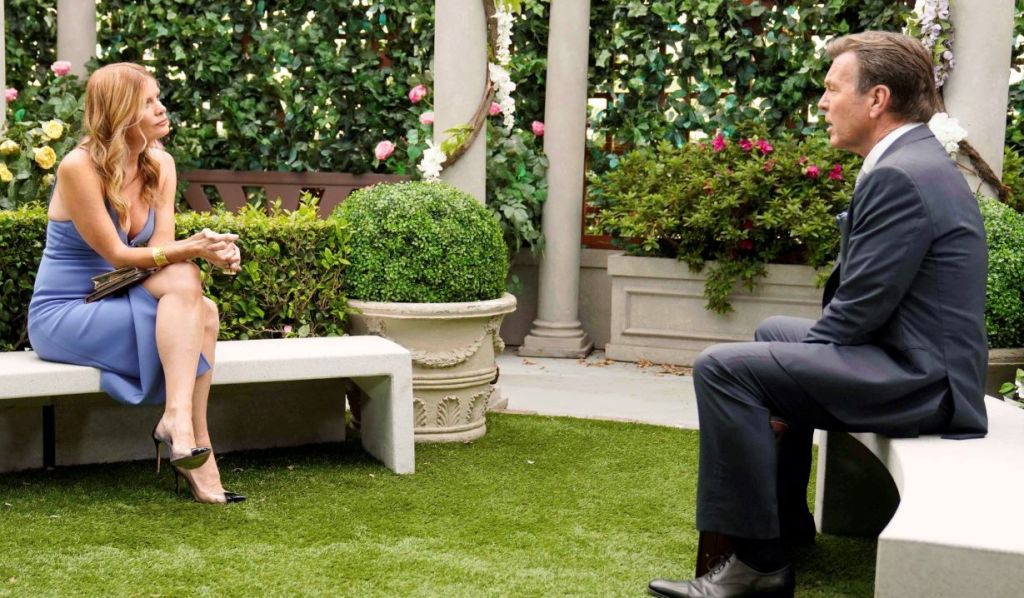 Phyllis wanders into the Grand Phoenix where Lily has been waiting for her. They sit down and Lily talks about how her company wants to see the city have an upscale exclusive hotel for their VIPs. Phyllis loves the idea of collaborating with her on this. That’s not what Lily is suggesting. She wants to buy the hotel. “I am the phoenix,” Phyllis says. The hotel is her story and her slap in the face of all the people who never thought she amounted to anything. Lily knows that and adds she can get a hefty price for it. This could be a new chapter in her life. Doesn’t she want a simpler life of luxury? She hands her a proposal with a bid. Tossing her hair back, Phyllis picks it up and reads through, screwing up her eyes as she does. It’s a very lucrative offer, but it’s not about the money for her so the answer is no. Lily agrees to accept her answer for now but hopes she will reconsider. 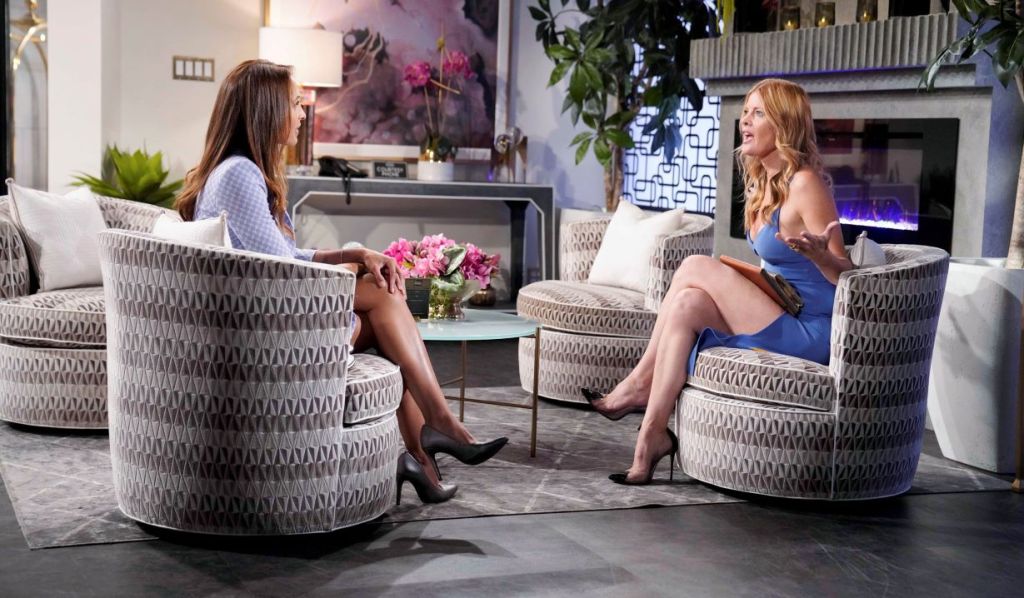 She exits as Jack enters. He’s only there to meet with the Marchetti board. Red tells him she could use some business advice because Lily just dropped a bomb on her. Chancellor-Winters wants to buy the hotel. He’s amazed when he sees the offer and doesn’t think she’ll get a better one. Phyllis loves running the place. It’s her proof of success and it has good memories. Jack tells her it’s a highly personal choice she needs to make on her own. She doesn’t feel like she belongs in Genoa City anymore. Defensively, Jack says he won’t be backed into a corner. He admits he loves her. That’s why this all hurts so much.

Victoria wanders in the park, chatting on her phone about getting rid of an atrium. She senses something and looks around then starts moving fast. Locke pops up and glares after her.

Next on The Young and the Restless: Billy and Chelsea get closer.

Take a look at in the photo gallery below.

<p><strong>Current status:</strong> Kaput. <strong>Their biggest obstacle:</strong> Between ’em, they have more emotional baggage than you could fit in the overhead compartment of a dozen jets.</p>

<p><strong>Current status:</strong> Boo’d up. <strong>Their biggest obstacle:</strong> She may soon learn the hard way that ol’ loverboy has never met a relationship that he couldn’t muck up.</p>

<p><strong>Current status:</strong> Married.<strong> Their biggest obstacle:</strong> They love son Dominic as much as they do each other. But over the long haul, will they love coparenting with sperm donor Devon?</p>

<p><strong>Current status:</strong> A dream scheme team.<strong> Their biggest obstacle:</strong> Nobody trips up these lovers quite like they do themselves. They’re definitely their own worst enemies.</p>

<p><strong>Current status:</strong> Don’t start us crying. <strong>Their biggest obstacle:</strong> His untimely demise stuck a fork in one of the more stable marriages that Sharon has ever had.</p> <p> </p>

<p><strong>Current status:</strong> Splitsville. <strong>Their biggest obstacle:</strong> With good reason, she hates his family as much as she loves him. Plus, if they never break up, they can never have make-up sex.</p>

<p><strong>Current status:</strong> Game over. <strong>Their biggest obstacle:</strong> What check-mates their coupling is the fact that their passion for one another is matched only by his tendency to be toxic for her.</p>

<p><strong>Current status:</strong> The honeymoon phase. <strong>Their biggest obstacle:</strong> The metaphorical honeymoon will be over any second now if mantrap Imani has her way.</p>

<p><strong>Current status:</strong> Divorced coparents. <strong>Their biggest obstacle:</strong> Did we mention how incredible Billy Boy is at turning good things bad? Because it does bear mentioning.</p>

<p><strong>Current status:</strong> A thing of the past. <strong>Their biggest obstacle:</strong> They might’ve gotten past her kissing his cousin Nate, but going so far as to play doctor with him? Er, not so much.</p>

<p><strong>Current status:</strong> Married… with children. <strong>Their biggest obstacle:</strong> It’s a tossup as to which of these two has a greater propensity for falling out of the frying pan and into the fire.</p>

<p><strong>Current status:</strong> Circling one another. <strong>Their biggest obstacle:</strong> Take it from “Skyle” — Newmans and Abbotts have a hard time getting together, never mind staying together.</p>

<p><strong>Current status:</strong> Together. <strong>Their biggest obstacle:</strong> The teenage sweethearts don’t get a whole lot of screentime, so it seems like it’ll be a while — <em>quite</em> a while — before they get their names blown up like Tessa and Mariah’s.</p>

<p><strong>Current status:</strong> So divorced. <strong>Their biggest obstacle:</strong> He may have married her twice, but he now hates her three times as much as he ever did.</p> 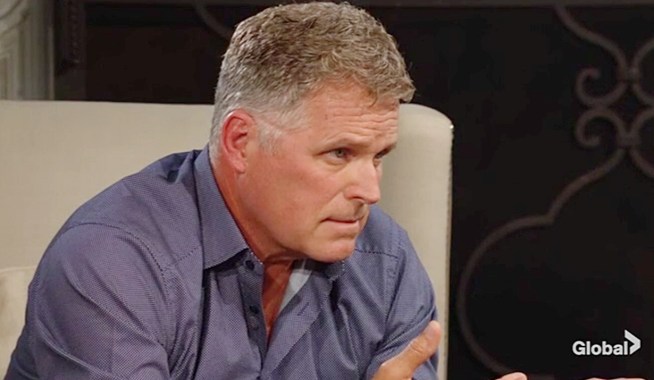 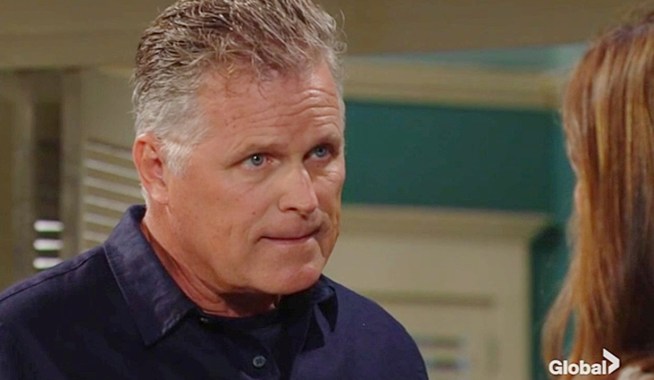