Friday July 8, 2022: Today on The Young and the Restless, Jack gives Sally advice about Adam, Chelsea has an idea for Billy, and Victoria assumes everything is going back to normal. 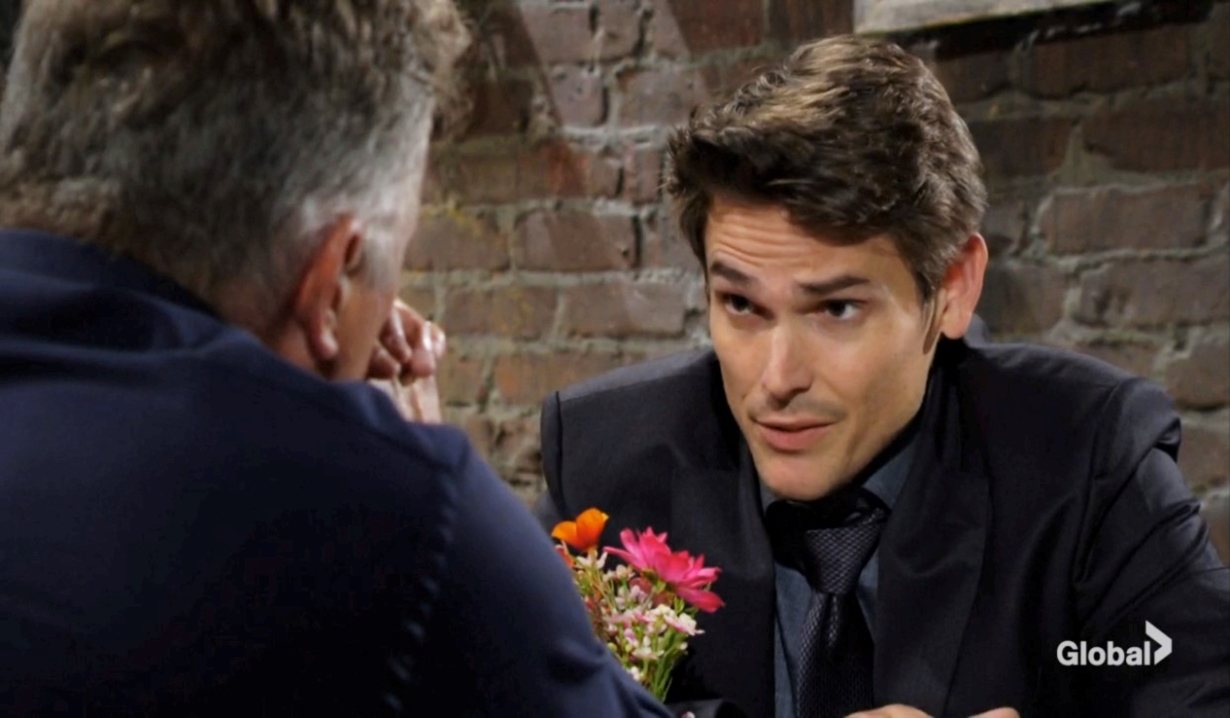 As Sally jogs in the park, she gets a text from Chloe, who is eager to discuss her job offer. Spectra writes back to say things have changed and are up in the air. She calls Adam to ask what the next move is. Jack arrives and says that “moves and counter-moves” make it sound like she and Adam are made for each other. He makes it clear that he’s fond of Adam and wishes them well. She’s worried about whether or not she should be freaking out right now. After she recaps the whole situation at Newman, he says that Victor has always had a hideously cavalier attitude in manipulating his children. They discuss all the complicated dynamics at play around Adam. She thinks he’s done plenty to deserve respect from the family that he doesn’t get. 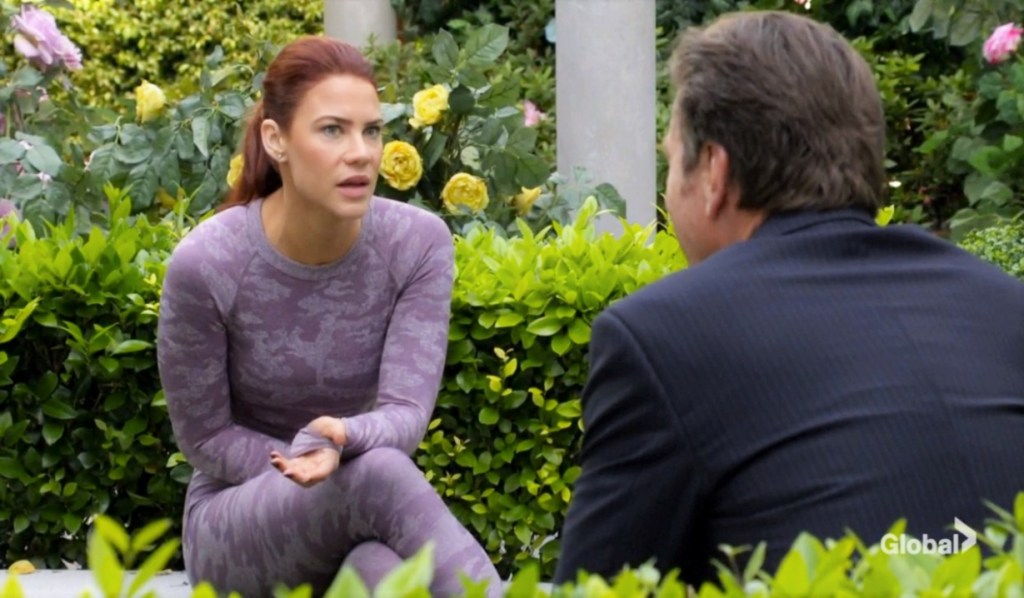 Sally tells him about how she has established herself in town and how supportive Adam has been. Jack has always admired what a big dreamer she is. She’s so proud of all she’s accomplished but now what she wants might be taken away. The one thing she is sure about is Adam. Jack can hear the love in her voice. The two of them make sense to him and he’s glad they’ve caught up. As he gets up, he adds that Adam tends to overreact when he’s emotionally wounded and urges her to take care of herself.

In a booth at Crimson Lights, Nick explains to Sharon that Victoria had a big plan all along and her turning on the family was a game. He might not approve of her methods, but they worked. She also offered him a job. Sharon wonders if he’s going back to Newman and what this could mean for the Adam situation. He explains that his brother stormed out, upset about being used as a chess piece in a big mind game. Nick suspects that Adam was hoping Victoria would be punished for what she did rather than rewarded. Nikki thinks that his sister will want him to be COO. She leads him out to clear his mind. 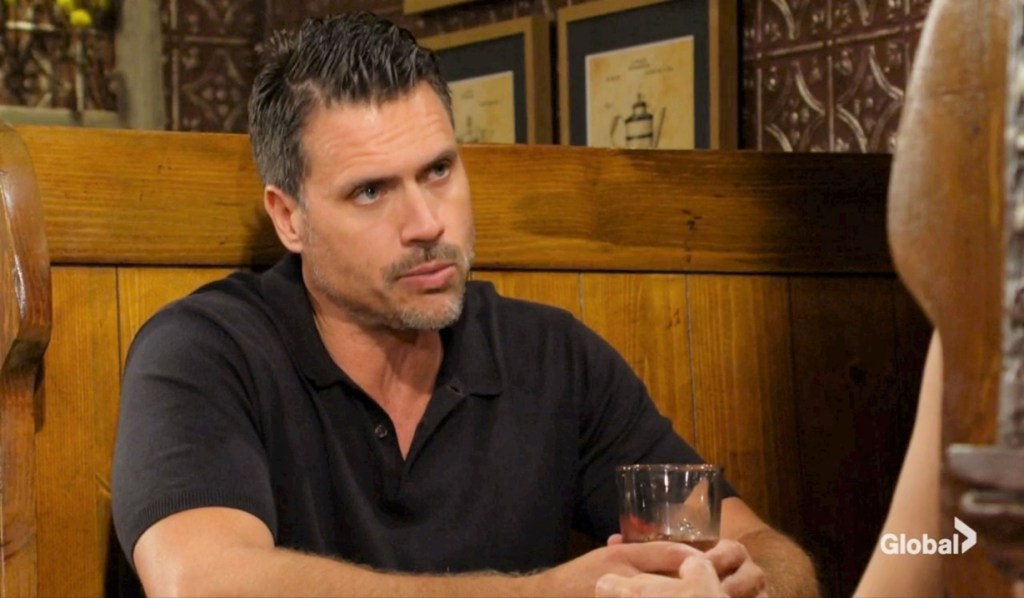 They take a walk and then sit in the park. They go over the pros and cons and how returning to Newman might affect the kids. Stepping away from New Hope also isn’t something he’s looking forward to. She reminds him that returning to Newman would help him protect the family and steer the corporation in a new direction. Noah can step in at New Hope. It could be a big opportunity for him.

From the way she’s talking, he assumes she thinks he should go back to Newman. Now that he can see his family for who they are, she thinks that it’s appropriate for him to return to that environment. He’ll be in a position to add reason to the chaos and not let it control him. It could be the most fulfilling thing he’s ever done. Nick thinks she makes it sound amazing. Sharon knows him and is sure he’s already decided to go back. Nick needed to hear her advice to make sure he’s not crazy. He thinks this is the right decision. 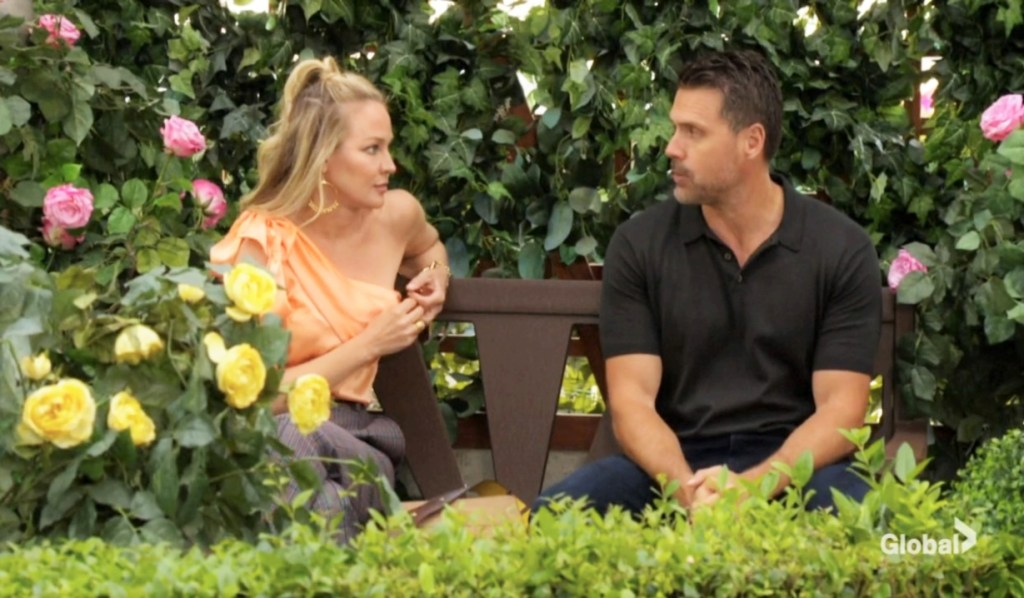 Nikki hangs a portrait of Victoria over the mantle in the CEO office. Victoria is happy that she and her father are in a good place again, even if he is upset that he was kept in the dark. She’s hoping everything can go back to just the way it was. Nikki is happy to return to her most recent role and they chat about what Nick might do. He’s the kind of person, one with unquestionable loyalty, that Victoria needs around her right now. They can accomplish such great things together with Victor as their advisor. Her mom worries about the “wild card who could blow everything up.” Victoria assumes she means Adam. Nikki thinks they need to handle him carefully. Her daughter already plans to welcome him back as CEO of Newman Media, where he can’t affect the rest of the company. That doesn’t sound great to her mom, who thinks he will be a menace and cause trouble for her. Victoria dismisses him as “white noise.” 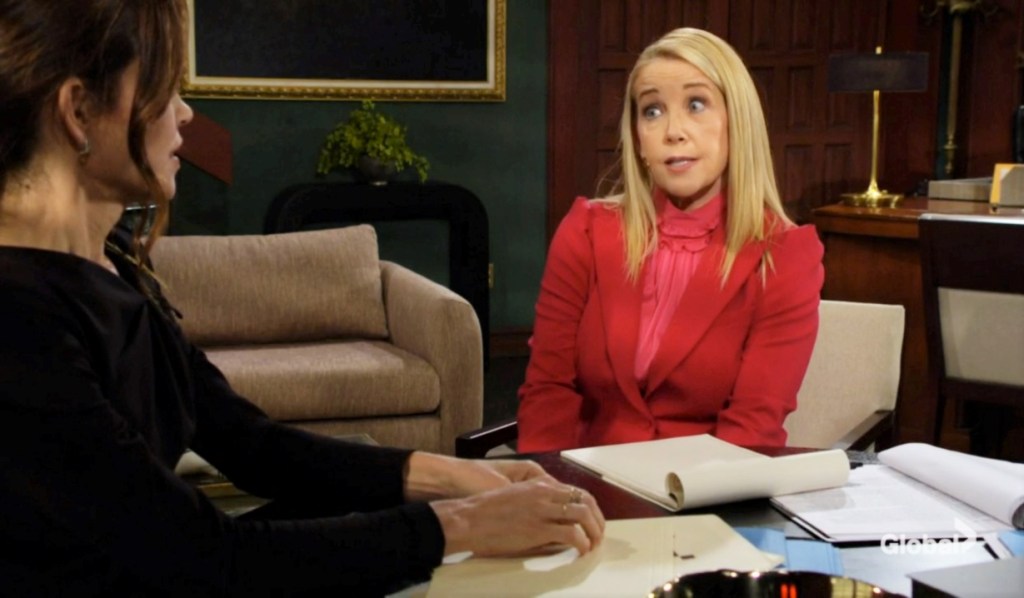 At Society, Chelsea arrives as Billy and Adam are bickering at the bar. Sitting nearby, Stannis sends Ashland a text and tells him what he just saw. After Adam storms out, Chelsea approaches and asks Billy what that was all about. They get a table and he tells her Adam was just having a bad day. The topic flips to her relationship with Chloe. She had to dig deep to figure out what was going on and figured some things out. She’s taking a step back from fashion and has him to thank for giving her some clarity. After so much of saying “yes” to everything, the right choice for her now is to walk away. 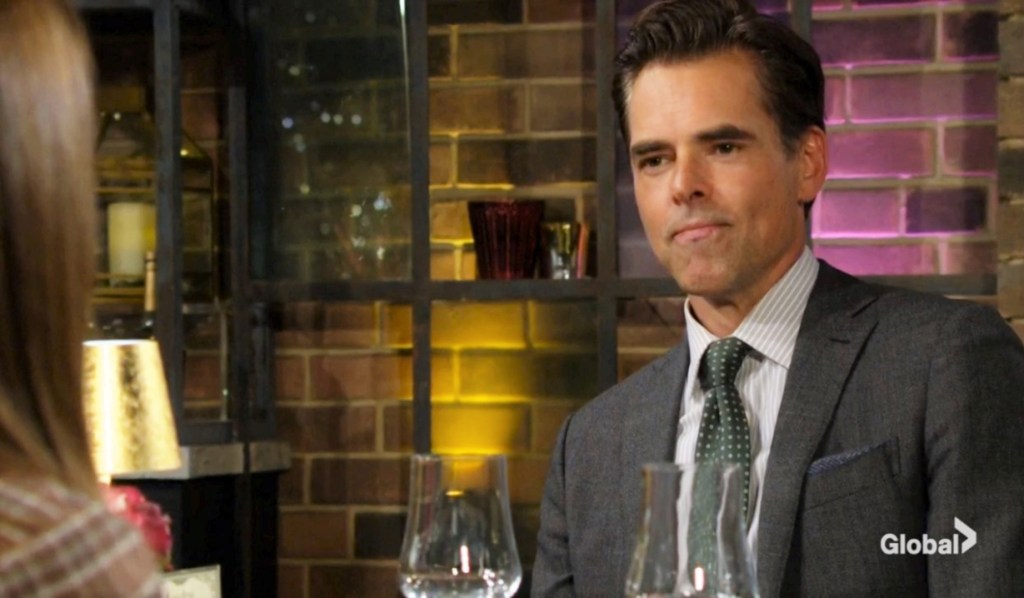 Chelsea wants to do something to thank him. He says she doesn’t owe him anything. They rehash his podcast and she says she’s willing to help him push it along and re-adjust his tone. He tells her he works alone in the middle of the night. She thinks that could be the problem. Since his research suggests his audience has plateaued, he thinks she might be onto something. When he spots Victoria, he asks to speak to her alone. Chelsea leaves, looking back at him with a lingering glance.

Billy tells Victoria how worried he was when she left with Locke. Victoria says she’s back for real and explains there’s a favor she wants from him. Victoria wants Billy to use the Grinning Soul to expose Locke and all the things he’s done.

Locke sneaks into the Crimson Lights patio and finds Adam moping. He acts surprised to see him. The Newman is confused about why he would come back to Genoa City after the way Victoria worked him over. Locke claims he left behind some personal belongings and needs to pick them up. Adam suggests she likely burned them or left them at the curb. Ashland wonders if Adam feels like he’s been kicked to the curb since Victoria returned to take her place on the throne. Sitting down, he expresses admiration for the way that Victoria played the game — it’s almost like something Victor himself would have come up with. Adam tells him he had it coming. “We all have it coming,” Locke says, pointing out that she played them both to get what she wanted. 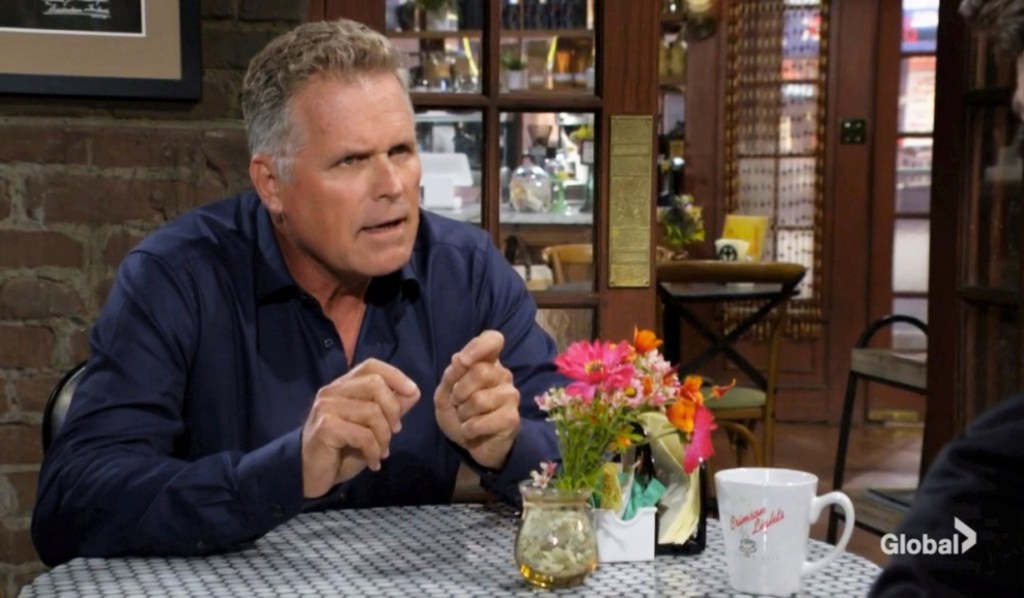 Ashland recognizes that Adam has already been pushed out again and betrayed by his father. Victor took away his power and respect, and that’s more valuable than cash. He makes it clear he hasn’t returned to get back with Victoria. Ashland and Adam realize they both want revenge. “Have a nice night,” Locke says, walking off.

Adam drops by Sally’s office and tells her that Locke is back and seems to have less than benign interests. He explains that Locke thinks they are after the same thing: revenge. So, maybe things aren’t over… They both know what it’s like for Victoria to take everything from them. If his sister is feeling distracted and attacked, she could make mistakes and he could take advantage of them. His days of trying to prove to his father that he is worthy of being at the top are over. 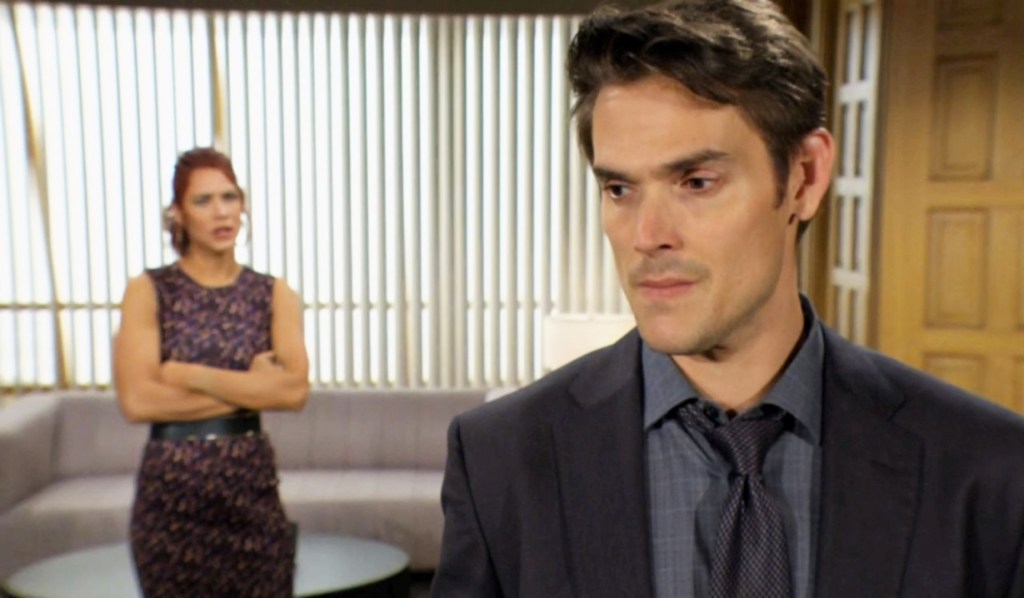 Victor has insulted and used him again and again and his sister has enjoyed it. “I just want to see my dear little sister crash and burn and I want to see my father go down with her,” he says. Ashland is right, he concludes: They both want the same thing.

Jack bumps into Nikki at Crimson lights. He doesn’t want to get into it with her over Diane again. She doesn’t like him being “Mr. Neutral” and vents about the Abbott family refusing to block Jenkins from settling back into town. Anyway, she has more important things to worry about, like her family. He’s sure she must be relieved to have her daughter back without Ashland. 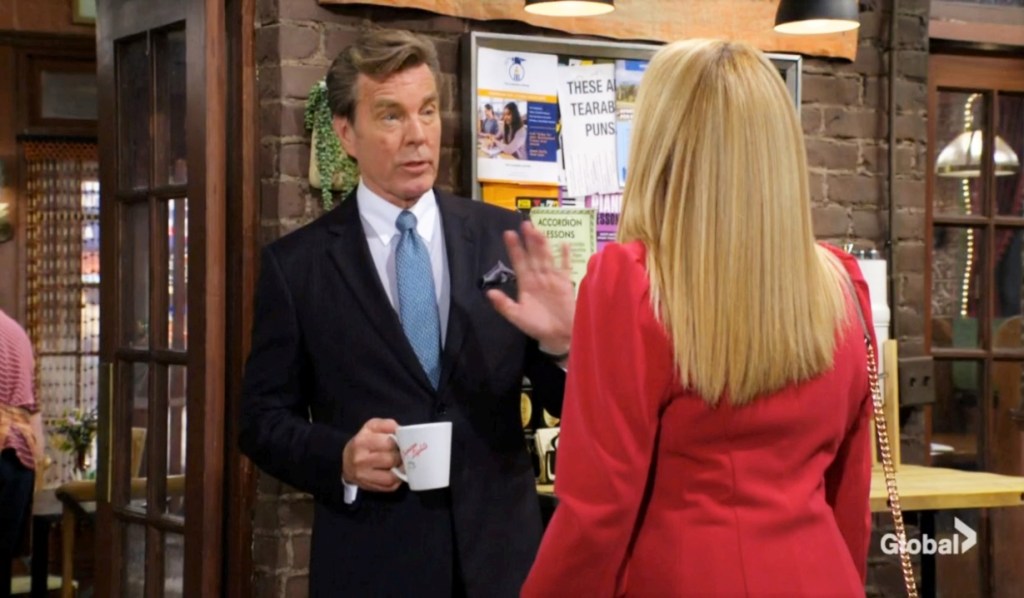 Locke returns to his suite at the Athletic Club and sighs.

More: Adam and Ashland team up for revenge

Next on The Young and the Restless: Billy uses his platform for revenge, Victoria makes a power move, and Victor gives Michael a challenging assignment.

Take a look at the Young and Restless couples report in the photo gallery below.

<p><strong>Current status:</strong> Kaput. <strong>Their biggest obstacle:</strong> Between ’em, they have more emotional baggage than you could fit in the overhead compartment of a dozen jets.</p>

<p><strong>Current status:</strong> Boo’d up. <strong>Their biggest obstacle:</strong> She may soon learn the hard way that ol’ loverboy has never met a relationship that he couldn’t muck up.</p>

<p><strong>Current status:</strong> Married.<strong> Their biggest obstacle:</strong> They love son Dominic as much as they do each other. But over the long haul, will they love coparenting with sperm donor Devon?</p>

<p><strong>Current status:</strong> A dream scheme team.<strong> Their biggest obstacle:</strong> Nobody trips up these lovers quite like they do themselves. They’re definitely their own worst enemies.</p>

<p><strong>Current status:</strong> Don’t start us crying. <strong>Their biggest obstacle:</strong> His untimely demise stuck a fork in one of the more stable marriages that Sharon has ever had.</p> <p> </p>

<p><strong>Current status:</strong> Splitsville. <strong>Their biggest obstacle:</strong> With good reason, she hates his family as much as she loves him. Plus, if they never break up, they can never have make-up sex.</p>

<p><strong>Current status:</strong> Game over. <strong>Their biggest obstacle:</strong> What check-mates their coupling is the fact that their passion for one another is matched only by his tendency to be toxic for her.</p>

<p><strong>Current status:</strong> The honeymoon phase. <strong>Their biggest obstacle:</strong> The metaphorical honeymoon will be over any second now if mantrap Imani has her way.</p>

<p><strong>Current status:</strong> Divorced coparents. <strong>Their biggest obstacle:</strong> Did we mention how incredible Billy Boy is at turning good things bad? Because it does bear mentioning.</p>

<p><strong>Current status:</strong> A thing of the past. <strong>Their biggest obstacle:</strong> They might’ve gotten past her kissing his cousin Nate, but going so far as to play doctor with him? Er, not so much.</p>

<p><strong>Current status:</strong> Married… with children. <strong>Their biggest obstacle:</strong> It’s a tossup as to which of these two has a greater propensity for falling out of the frying pan and into the fire.</p>

<p><strong>Current status:</strong> Circling one another. <strong>Their biggest obstacle:</strong> Take it from “Skyle” — Newmans and Abbotts have a hard time getting together, never mind staying together.</p>

<p><strong>Current status:</strong> Together. <strong>Their biggest obstacle:</strong> The teenage sweethearts don’t get a whole lot of screentime, so it seems like it’ll be a while — <em>quite</em> a while — before they get their names blown up like Tessa and Mariah’s.</p>

<p><strong>Current status:</strong> So divorced. <strong>Their biggest obstacle:</strong> He may have married her twice, but he now hates her three times as much as he ever did.</p> 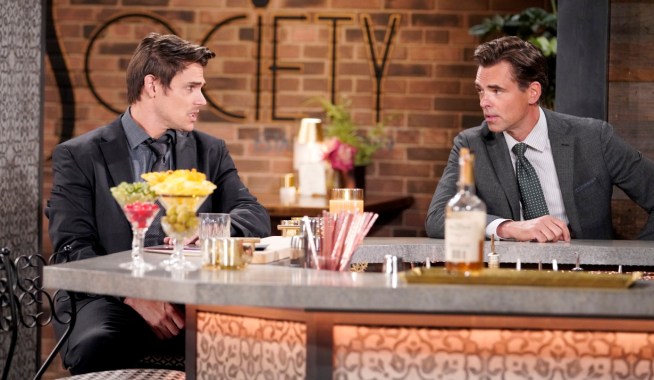 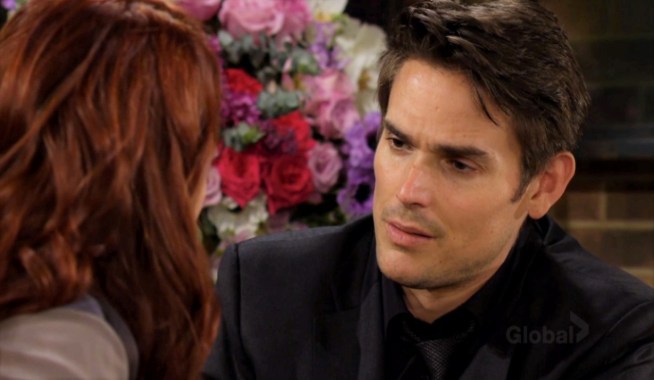