Monday July 4, 2022: Today on The Young and the Restless, Jack opens up to Kyle, Elena tries to reassure Mariah and Tessa, and Allie and Noah bond with an MP3 player. 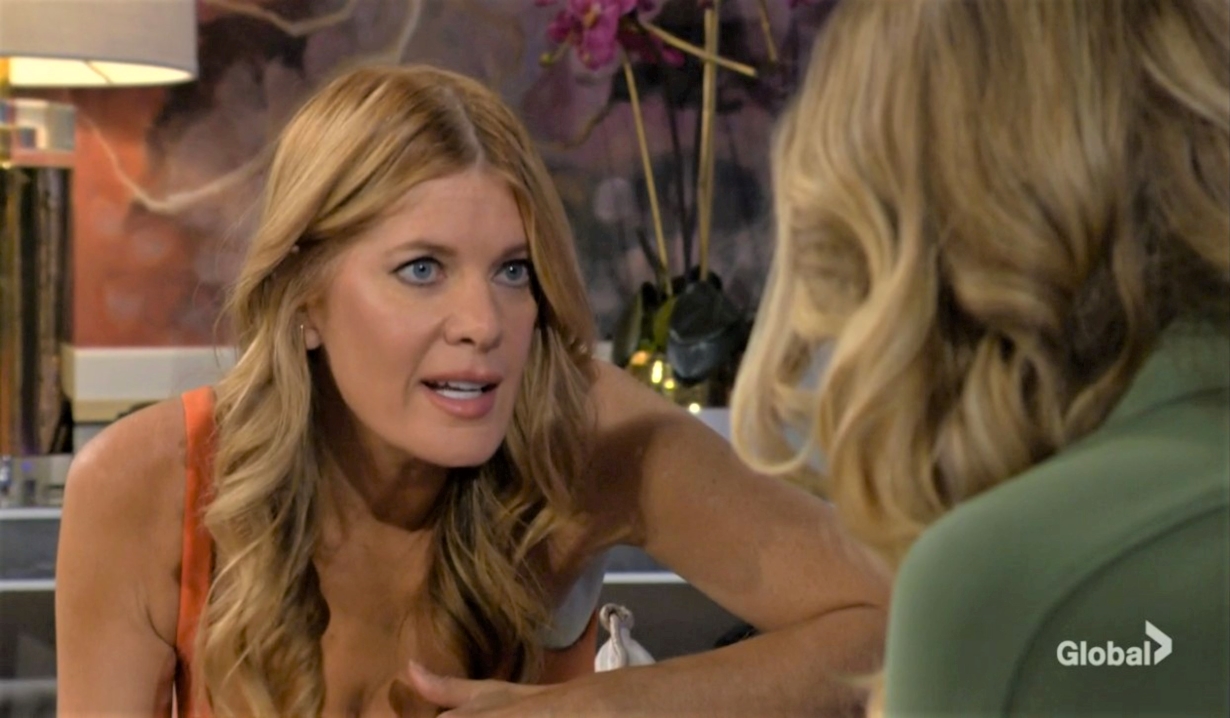 At the Grand Phoenix, Phyllis is startled when Diane wanders in. “You need a bell around your neck,” Phyllis tells her. Her nemesis wants access to the spa. The massages have made a new woman out of her. Phyllis says she’s not poaching customers from the Athletic Club and refuses to serve her. She reminds her she was escorted off the premises earlier. Jenkins would hate it if anyone learned that their detente wasn’t real. Stepping in, Summer gets between the “two peacemakers.” Diane explains she wanted to spend her self-care money there as a gesture of goodwill. Phyllis says the Phoenix welcomes her with open arms. They talk about making sacrifices for their children and Red decides to gift her with the “resurrection-rejuvenation” treatment that is supposed to be so potent it can bring people back from the dead. That sounds self-indulgent to Diane, who adds, “But I’m worth it.” 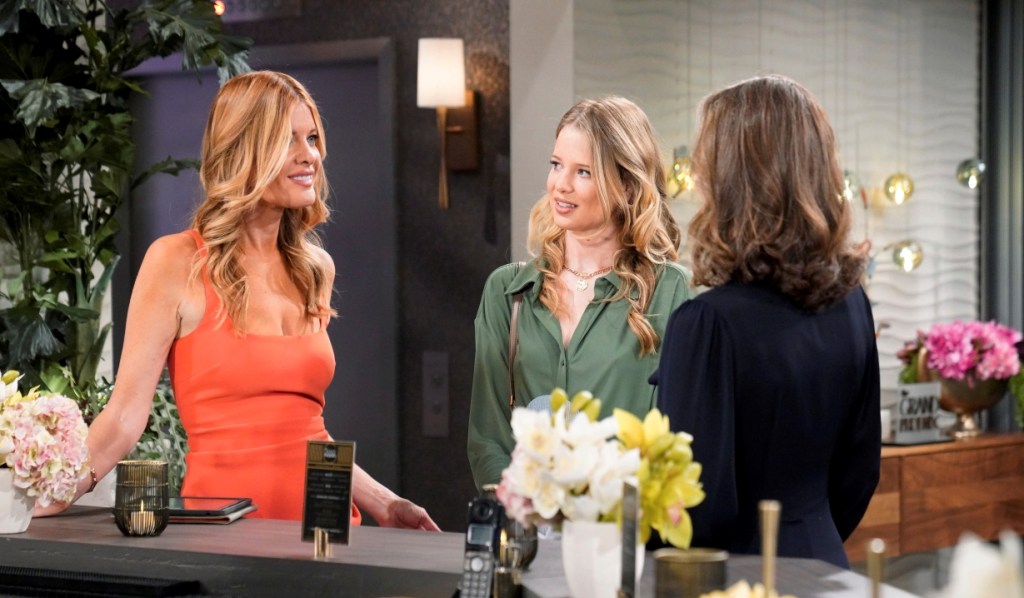 Once Diane has sauntered away, Summer asks her mother what that little spectacle was about. Phyllis assures her that she will be taking the high road, even if it is uncharted territory. She asks her daughter if taking on Diane to work at Marchetti is really a good idea. Getting upset, she insists she is only trying to protect her — Summer doesn’t remember what Diane was really like. Summer insists they are only trying to set her up for success. Phyllis is appalled to realize she has become a “believer” in the redeemed Diane.

Summer thinks this is about more than her mother’s history with the other woman and asks why she broke up with Jack. Her mother won’t explain. Summer keeps pushing but has no luck. Clearly Jack is heartbroken about all this. Her mom cannot accept that Jack has let Diane back into the family after everything she did to her. “I’m sorry about what happened,” she admits. Her daughter keeps prodding for details. Phyllis admits she screwed up, behaved like her old self, and regrets it. But having Diane back just pushes her buttons and sometimes she loses control. Maybe she escalated things, but she still cares about Jack. Summer gets that she cares but was still marking her territory. The redhead repeats that her feelings about Jack are real. Diane returns and eavesdrops as Summer tells her mother that Jack deserves a lot better treatment than what she’s shown him.

More: Time for Phyllis to turn the tables

At the Abbott estate, Allie asks Jack if the internship offer is still open. She is very interested, which thrills him. He’ll call HR right away. She worries that people will think she’s taking advantage of being part of the family. She only hopes that no part of him is doing this because of her DNA or guilt over the years he lost with her dad. He assures her that they are happy to have someone with her level of education in the position. He’s also thrilled she’s interested in the family business and will be sticking around for a while. 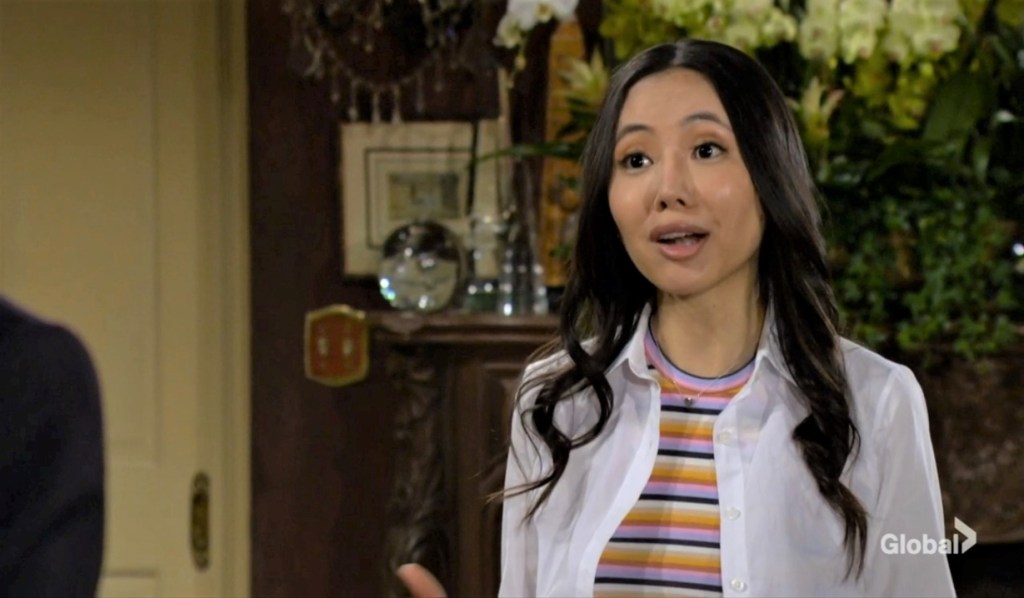 Noah shows up as Jack takes off to a meeting. He asks Allie how she feels about surprises. She hates them. He’s brought her an MP3 player filled with an old radio show. It’s a whodunnit and they have to listen to the clues and piece together the criminal. She’s surprised by all this ancient technology and he has to explain how it works. They each take an earbud and listen. After they listen to the first few episodes, she says that was like stepping into a time machine. This was perfect, better than a movie. Following some bragging, she decides to impress him with her popcorn-making skills. He insists on going along to supervise and make sure she doesn’t skip ahead on their radio show. After they return to listening to another episode, they stop and start debating about who could be the murderer. They each make their cases and then he suggests a wager. If he wins, she owes him six hours where she has to laugh at his jokes. She agrees and if she wins, he has to help her train for a marathon. They go back to listening. As they taunt each other with guesses about the culprit, she puts her finger to his lip to silence him. Listening along, they almost kiss but then learn who the culprit was and are appalled it was someone neither of them expected. 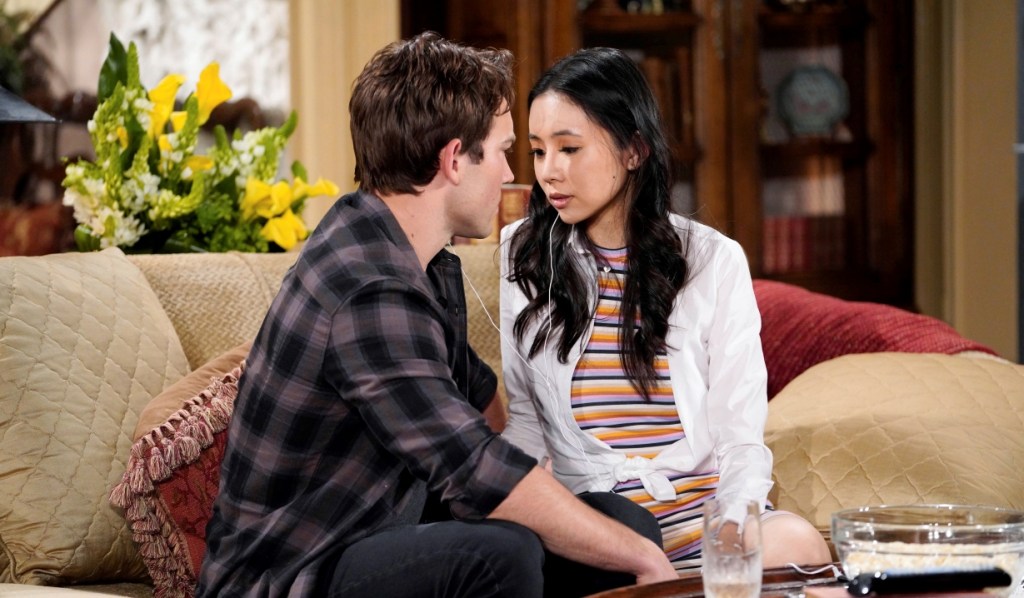 Kyle strolls into Crimson Light and tells Tessa and Mariah he just paid through the nose for tickets to Tessa’s concert. Mariah explains that her wife has vocal cord nodules. That means she will have to postpone her show and tour indefinitely. Tessa looks miserable. She’s worried about what all this time out of the spotlight will do to her career. Her wife knows it’s not ideal but they will make sure she gets the best care. Kyle is sure her fans will rally around her when she goes public with the news. He also urges her to get a second opinion. They are meeting with Elena this afternoon. Kyle brings up their adoption plans and they say they are putting those on hold until her health is sorted out. 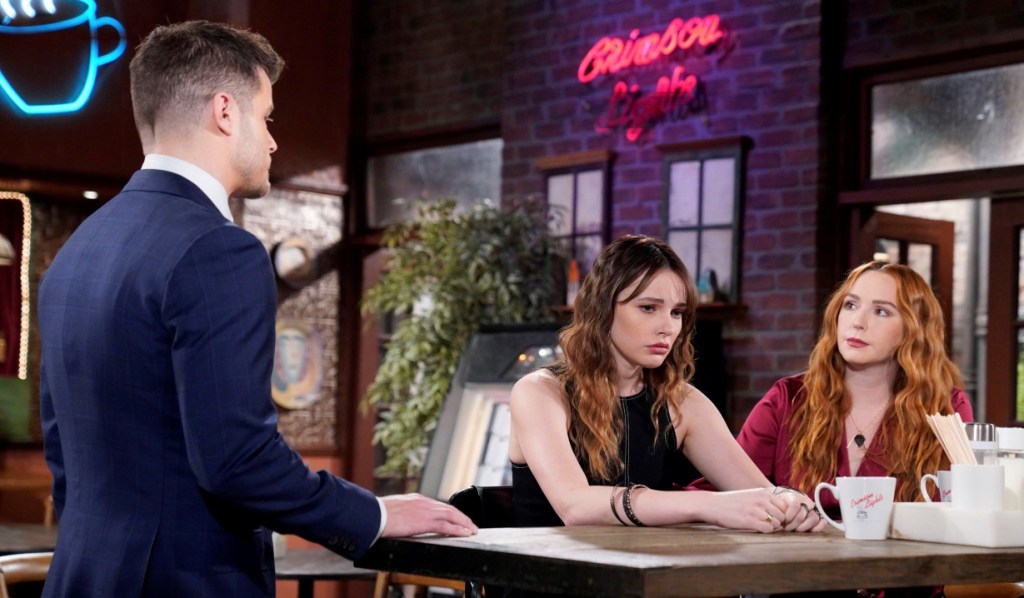 They change the subject to Kyle’s return. He informs them that he’s the new CEO of Marchetti. Mariah tells him he can’t ditch her at Jabot. He assures her he’s not, but Summer proposed this and he couldn’t say no. Mariah admits that he’s even had a positive effect on Summer. She’s come back from Italy almost likable. He says she’s the love of his life. Elena arrives and Kyle takes off to meet his dad, wishing them well.

The doctor sits down with the couple and explains Tessa’s situation seems very similar to what her uncle went through. “Is my singing career over?” Tessa asks. Elena encourages her to be optimistic. Her uncle recovered and went on a comeback tour. Time frames are unpredictable but she should just think of this as a detour and not rush her recovery. This makes Tessa feel better. Elena assures them they will get through this. 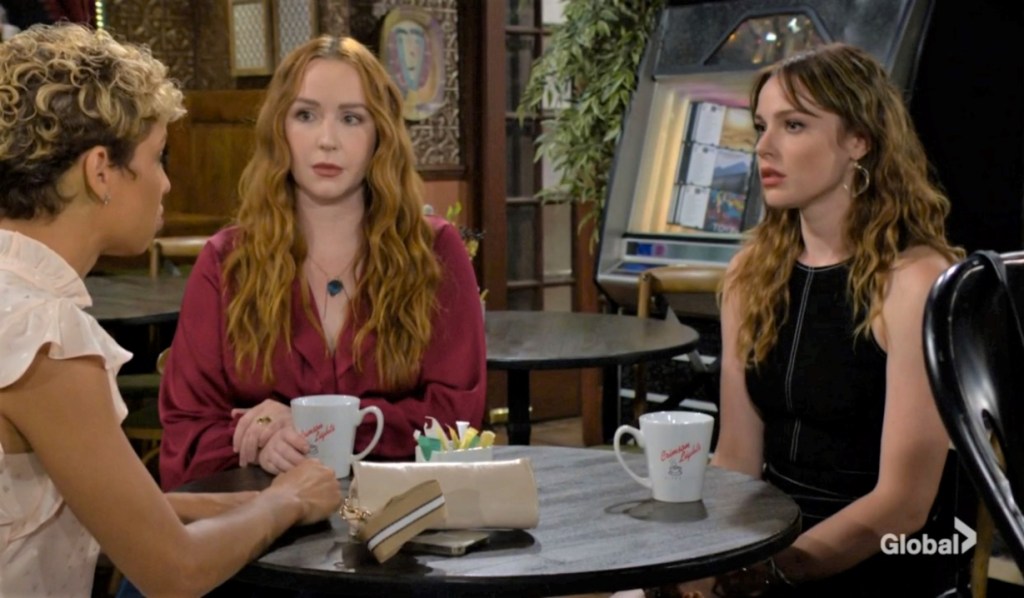 Kyle meets with Jack at Society, who immediately makes it clear he doesn’t want to discuss Phyllis. He reminds his son he has enough going on in his own life without worrying about that. Kyle is still concerned about what his mother might have done to disturb things. He needs to know if everything she is doing is above board or whether she did something to sabotage him and Phyllis. Jack explains that he and Red were trying to take their time and he was hoping they could move on to the next level. He realized that the escalation to something physical was because of Diane’s presence. Jenkins brings out the worse in Phyllis. It sounds to Kyle like he’s more willing to give his mother the benefit of the doubt than Phyllis.

Jack is convinced Phyllis always goes back to her old self. She’s just like a rubber band bouncing back. She plotted to exploit what he thought was a meaningful moment between them just to stick it to Diane. Kyle is sorry he was used. To be honest, that she still hates his mother so much makes him worry about the trouble this could lead to. 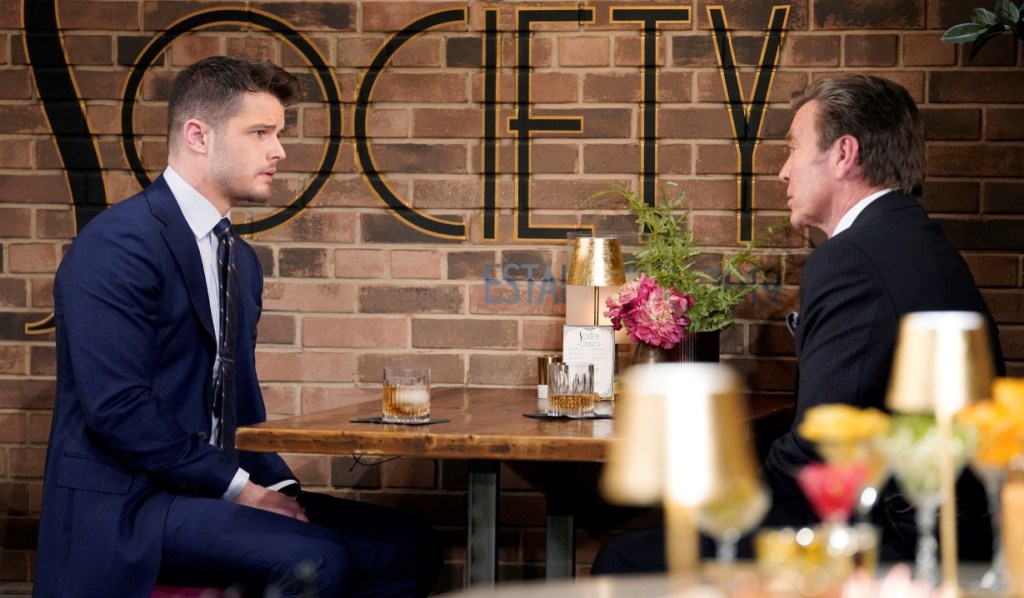 Next on The Young and the Restless: Lily consider an acquisition.

Take a look at in the photo gallery below to revisit the many faces of Kyle and Summer’s romance. 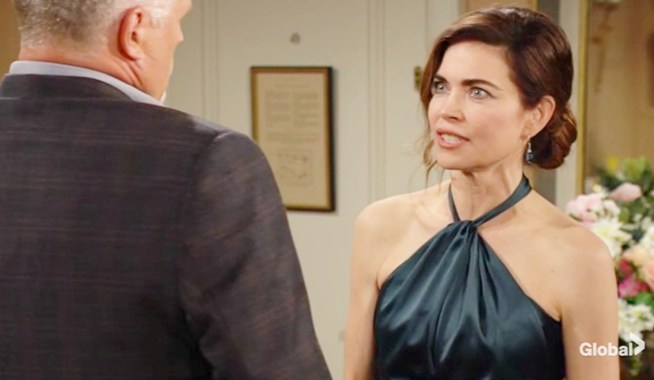 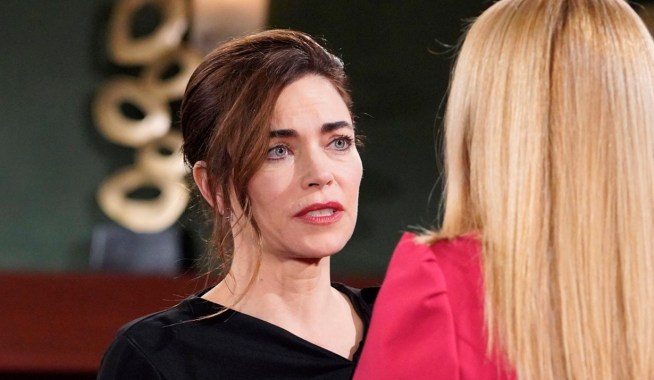