Friday February 25, 2022: Today on The Young and the Restless, Billy struggles to record a podcast, Traci and Phyllis dole out advice, and Imani shows her enthusiasm for the job. 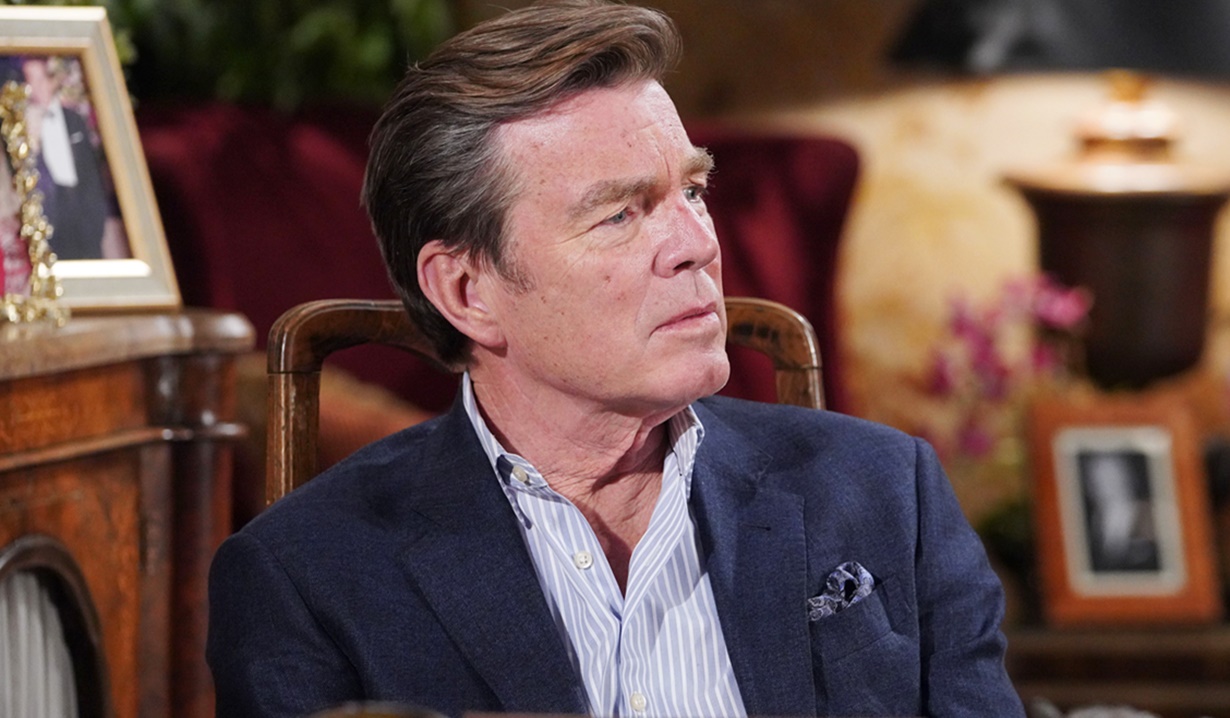 In an upstairs room at the apartment, Billy starts his podcast by welcoming people to what’s left of the mind of Billy Abbott. He explains he’s being kept awake at night by thoughts that need to get out, so he’s ready to share them with the world… whether the world’s ready or not. Billy begins talking about his restlessness and then realizes he’s not even recording. After labeling himself a dumbass, he hits ‘record’ and starts again. Things go awry as he worries he sounds like an AM radio announcer, so he begins again. Next, Billy knocks things off his desk while gesturing with his hands, and takes to pacing. He sits again and plays with the microphone for a bit and then tries jumping jacks. Sitting again, Billy ruminates on wasting time and energy seeking revenge… much like this podcast. 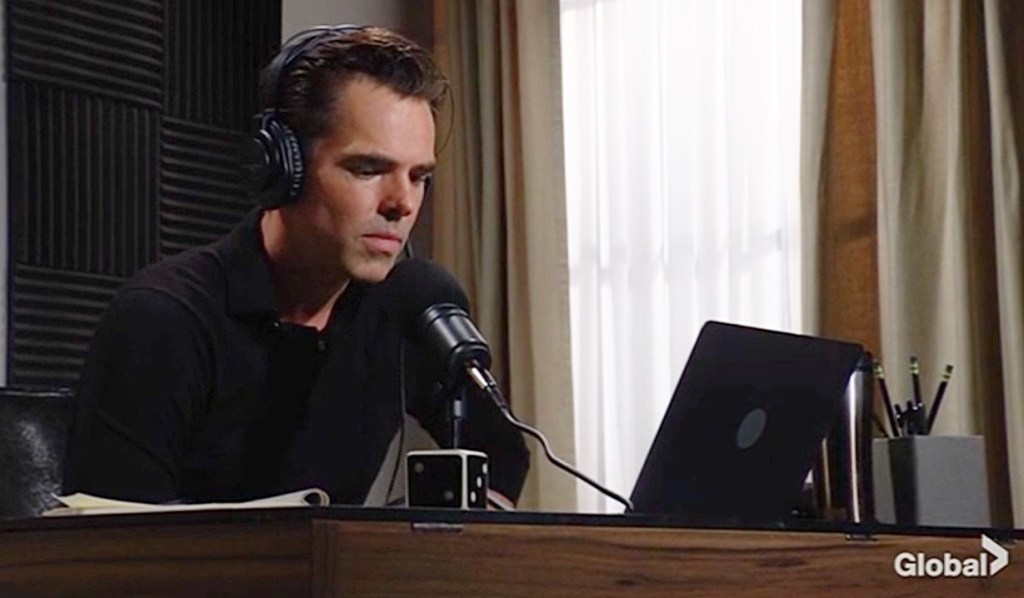 At the penthouse, Amanda tells Devon she has a meeting with Lily and Billy. He reveals that Lily asked him to meet with them as well and seemed excited about something. Devon gets a message from Abby that Dom’s doing well and is eating. “I can finally breathe again.” Amanda knows it’s been hard for him. Devon would like to have the boy come for a couple days once the doctor says it’s safe and marvels how much the kid has gone through. He asks what she thinks about Dom staying over more often — she’s about to start a demanding job. Amanda understands better than anyone what family means to him. She’s fully supportive and just happy to be a part of it. They kiss. The doorbell rings — it’s Imani. Devon asks if she’s coming to the meeting. She asks, “What meeting?” Amanda will fill her in after. Imani thinks she should go too, which will save her the trouble. They all head out.

More: When Calls the Heart, Lucas takes on Nathan

Downstairs in her apartment, Lily updates Jill that she’s invited Amanda and Devon over to discuss her idea. Jill thinks the proposal is outstanding and will be a game-changer for Chancellor Industries. Lily tells Jill her confidence in her means everything and she’ll try not to let her down. It will be huge if she can pull this off. Jill laughs. “That’s what makes it so thrilling.” They sign off. Billy appears and asks Lily why she was talking to his mom. Lily learns the podcast wasn’t flowing and he’s worried he’s a one-hit wonder. Lily suggests he try again after midnight. Talk turns back to her call with Jill and Lily explains she has an idea that could change everything for Chancellor. 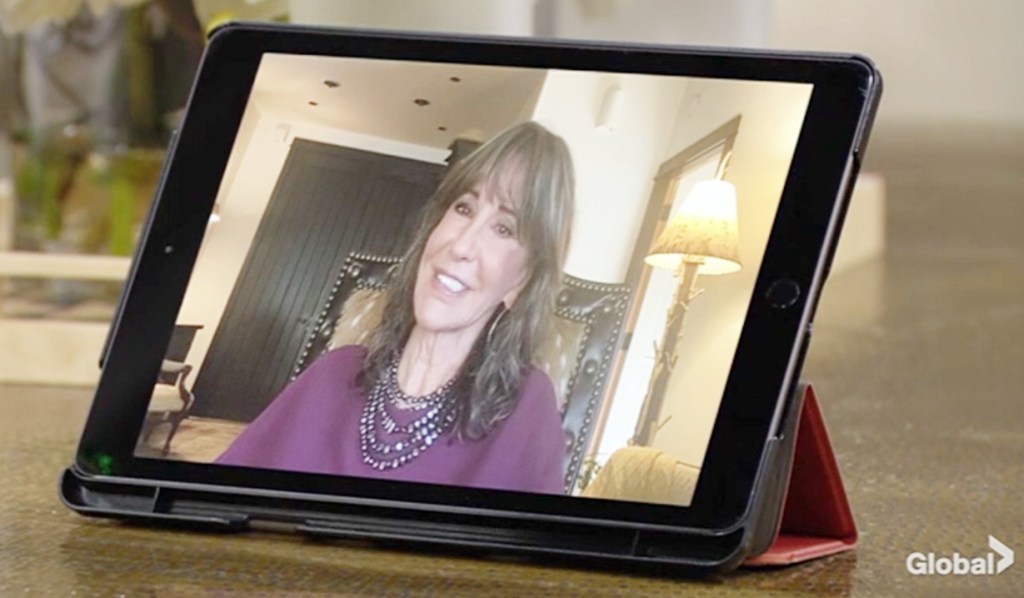 At the Abbott mansion, Jack sits in a chair agonizing when Traci appears to ask how he’s doing. Jack’s trying to wrap his head around Keemo being gone. She’s so sorry. Jack recalls when he learned he had a son; it felt like a miracle, but in the end, Keemo wanted nothing to do with him at all. Phyllis arrives and asks if there’s anything she can do. Jack replies, “Can you bring my son back?” He quickly apologizes, but she assures him there’s no need. They sit, and Jack reflects on how hard it was when Keemo shut the door. He never really got to be a father to him and now he’s gone. “I don’t know how I’m supposed to breathe.” 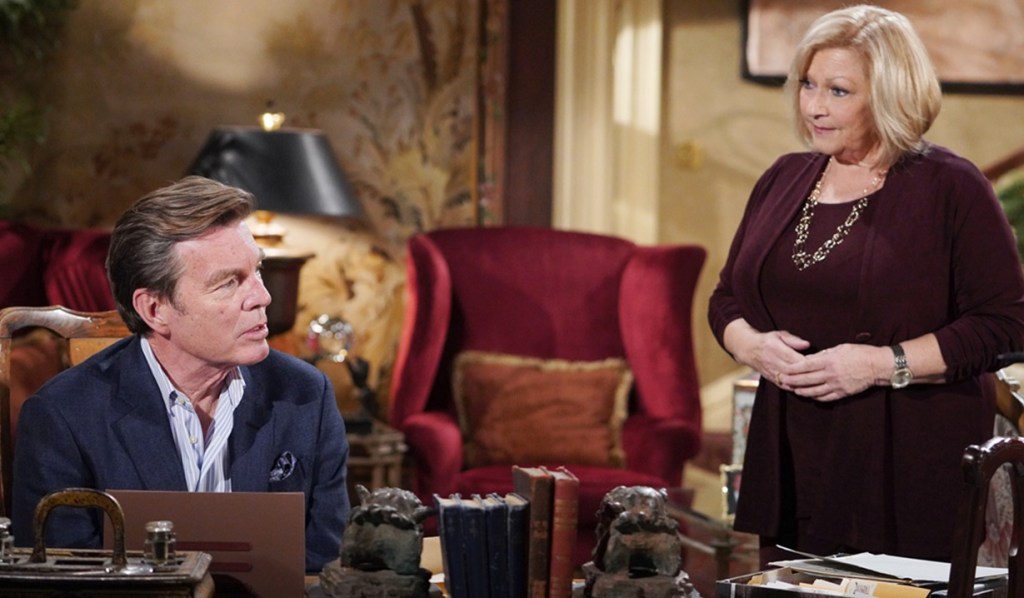 More: All about Keemo

Phyllis and Traci urge Jack to just feel what he feels — he’s in shock. Phyllis finds the blame, shame and regret useless. Jack’s not sure what will help him heal and re-reads the last blunt email from Keemo. They go over how it’s different from what Traci went through with Colleen. Phyllis wonders who would send the cryptic text messages to have him find out like this. The person obviously knows Keemo and his connection to Jack. “They have your phone number… I mean, this isn’t random.” Phyllis wonders if there’s more to the story of Keemo’s death that the person wanted Jack to know. Traci’s frustrated by the mysterious nature of the texts. Jack decides he needs answers. Traci cautions him to think this through, but Jack grabs his phone and responds to the last text asking, “Who are you and why are you sending me this information?” Soon, a response comes in. “Get to Los Angeles. The answers are there.” Phyllis feels he must go, but Traci has a bad feeling about it. The women debate whether he should let it go or not. 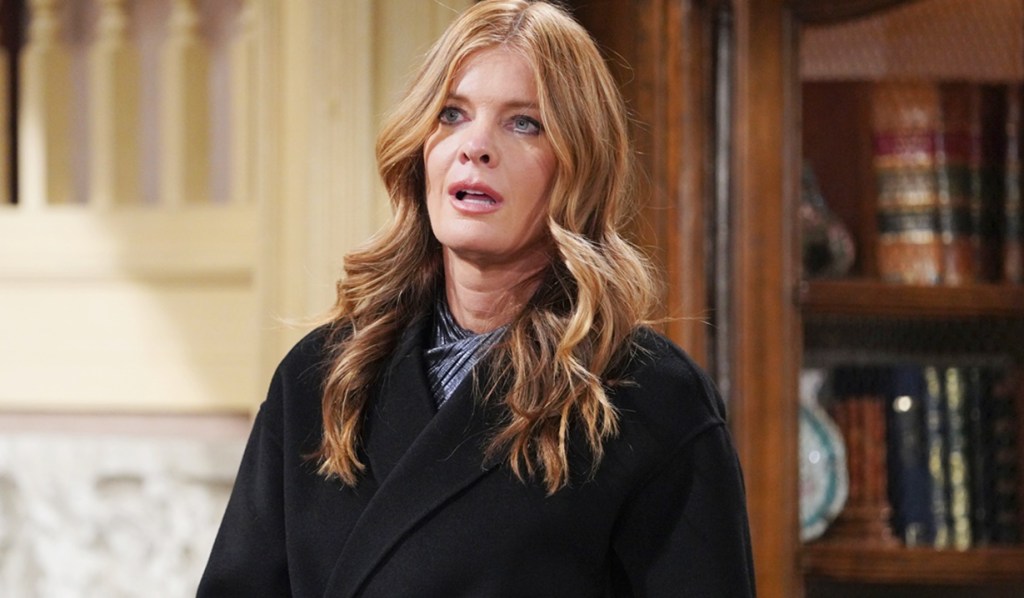 More: New Summer and Kyle in the works?

At their apartment, Billy has heard Lily’s idea off-screen and wonders what Devon will say. Lily hopes he sees the possibilities. Billy calls it an epic move and thinks it says a lot that his mother gave her the go-ahead. Lily senses he has a concern. “Just tell me.” Suddenly, Devon, Amanda and Imani arrive. They all sit and Devon gives an update on Dominic. Lily explains she’s called them there to discuss something bigger than the podcast… a lot bigger. She wants to merge Hamilton-Winters with Chancellor Industries, which would be mutually beneficial. Neil wanted them to work together and now they have the opportunity to do that on a large scale. They’d call the new company Chancellor-Winters. 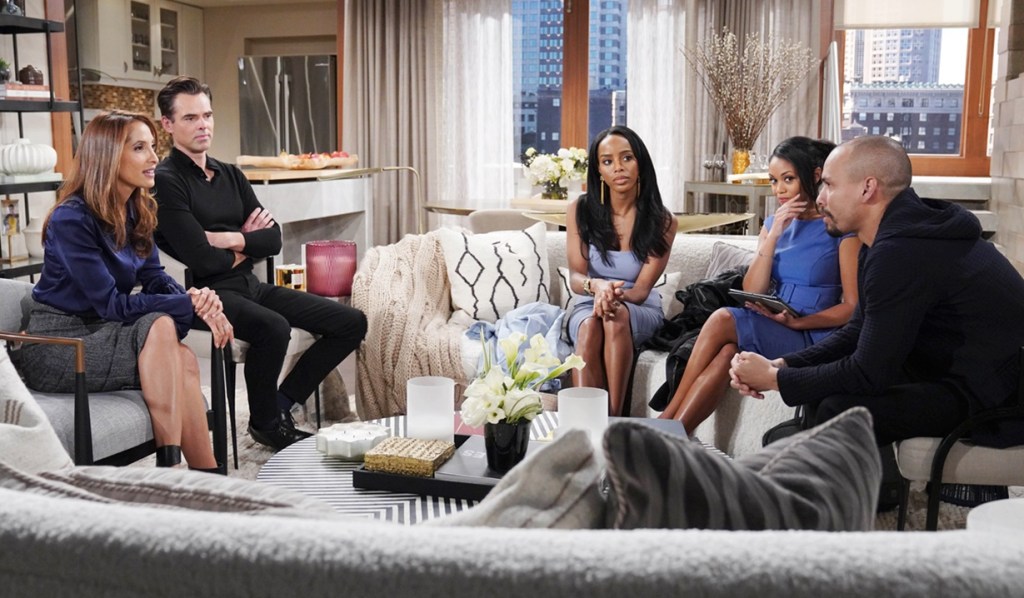 Devon’s taken aback. He’s not sure he can get behind this and points out Lily just started her job at Chancellor; this is a big undertaking. Lily argues that Jill signed off on it. Imani asks what Lily envisions as far as defining roles within the new entity. Lily thinks they would figure all that out later. Imani warns they’re critical issues that should be considered upfront. Amanda tells her sister it’s just a preliminary meeting about the big picture. 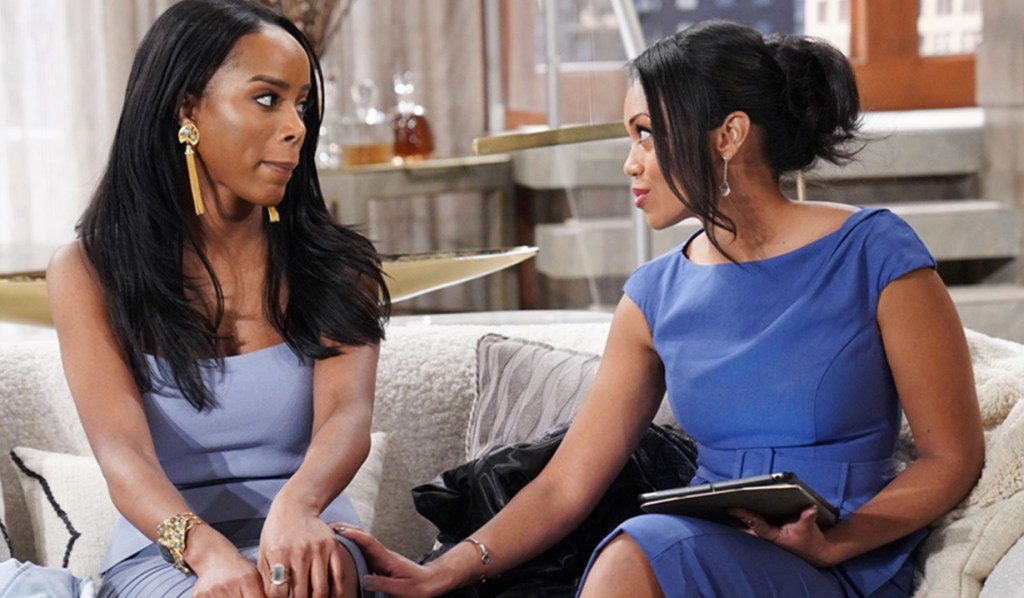 Devon feels a merger would be a huge shift — he has total autonomy at Hamilton-Winters and he loves that. Lily counters, “Think about what we could do together.” Devon loves the idea of working with her, but would rather just focus on the podcast for now. He doesn’t know yet if this would be the right move for him. “It might be bad timing to make such a big change. So, sorry.” Lily, disappointed, urges him to take his time and think about it. Amanda, Imani, and Devon file out.

Back at the penthouse, Devon asks Amanda what she made of Lily’s offer. She thinks it’s only what he thinks that matters and he’s obviously made up his mind. Devon values her opinion and wants to hear her take. Amanda knows he’s satisfied with the status quo, but she thinks she could come up with a scenario that would allow him to maintain control over the things he currently does. She reminds him of Neil and the strength of their connection. When she thinks of transforming the companies into a big family business, she thinks it sounds pretty wonderful. Devon appreciates her opinion and kisses her.

At the apartment, Lily paces and looks at a framed photo of her father. She recalls his advice in the past when she’d get impatient. “I promise you, dad. I’m not giving up.”

Upstairs, Billy does a podcast on Lily being a rock star and her latest genius idea. It’s her dream… but it’s a dream he doesn’t factor into. So here he is on the outside looking in again. “Story of my life.”

At the Abbott house, Jack tells Traci he has to follow up on the texts. “I have to go to Los Angeles. If there are answers to be had, I’m going to find them!”

Next on The Young and the Restless: Victor tests Nick’s loyalty.

ICYMI: We ranked Courtney Hope’s hottest red carpet looks in our new gallery below. See if you agree! 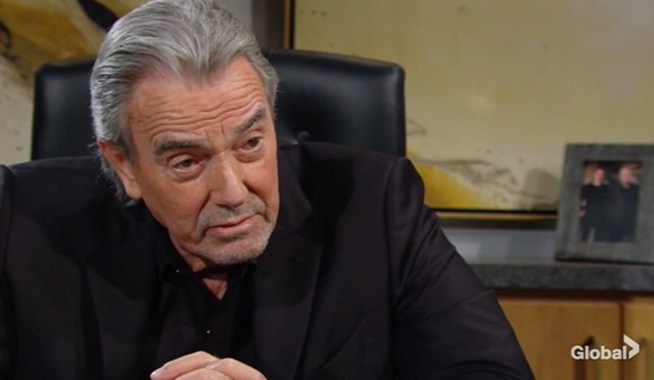 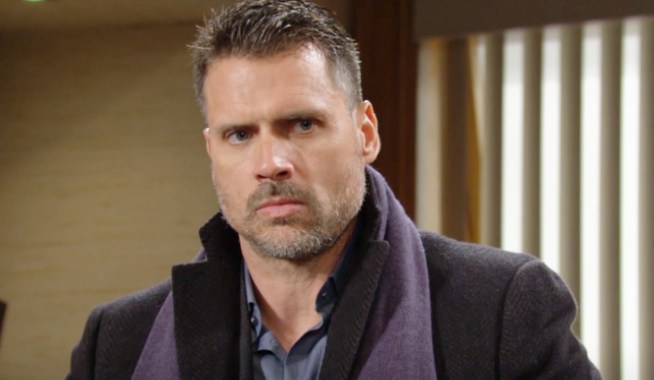