Tuesday, December 21, 2021: Today on The Young and the Restless, Victor summons Sally to the ranch, Connor makes an awkward request of his parent, and Rey plays third wheel. 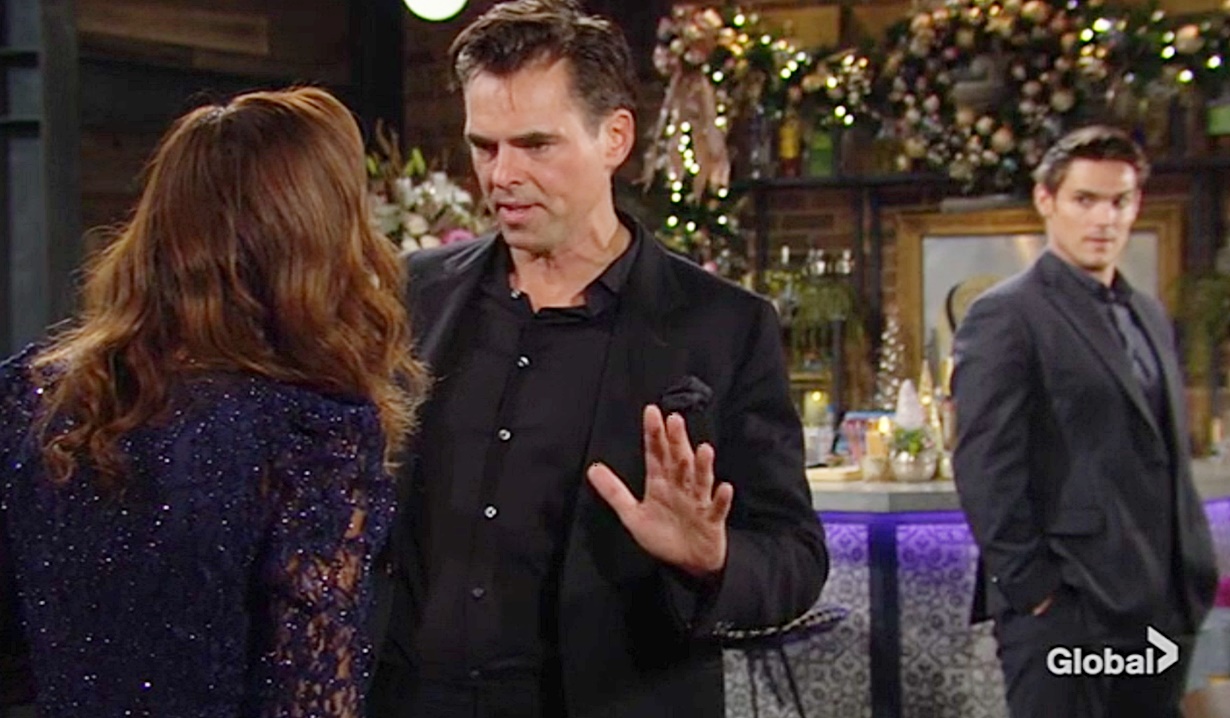 At the ranch, Victor thanks Sally for coming. She notes his message amounted to a summons, but she was glad to do it. Victor’s aware of the videos of Billy Abbott she’s sent to his son. Sally plays dumb, but Victor asks her not to waste his time. She admits it, and Victor demands to know her intentions. “What do you want?” Sally assures him her only intention is helping Adam and Newman Media. Victor didn’t know she was that altruistic. Sally is a team player, and this way they’ll have evidence if Billy comes at them. Victor questions if Billy’s unaware. He’s not as far as Sally can tell – he’s too worried about where his next drink is coming from to notice. She asks if they’re done there. “Were my answers satisfactory?”

Victor warns Sally she has to be careful of Billy Abbott and never underestimate him. Sally gathers he wants her to stop spying. Victor tells her there’s no longer any need for the information… or her disguises. Sally doesn’t want to let Adam down. Victor realizes they’re now getting to the crux of it; she wants to impress his son, Adam. “Think very carefully before you answer that.” Sally won’t deny she has an attraction to Adam, but she isn’t pursuing it. Victor says that better be true because Adam needs no further complications and must focus on his son. Sally relays that Adam has made it clear he has no time for a relationship, plus, she has no interest in jeopardizing her career. Victor brings up what she did to Summer. Sally realizes it was wrong, but she can’t change the past. Victor will give her the chance to prove she’s not that person anymore. He compliments her work on the dress for Victoria and urges her to concentrate on work. Victor’s impressed and hopes she’ll continue to impress him as time goes on. Sally beams. 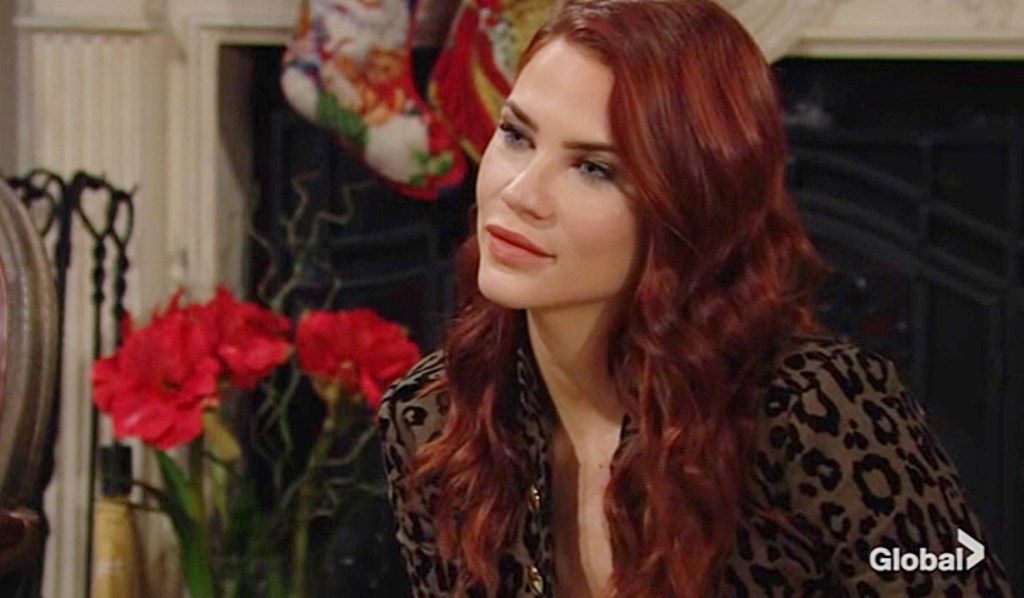 At Crimson Lights, Sharon wonders to Noah why the place isn’t busier, but he’s totally distracted. Nick wanders in. Sharon’s glad he’s there – maybe he’ll talk to her. Noah snaps out of it and asks when his dad got there. They tease him about ignoring them before Nick updates Sharon and Noah on his talk with Victor, who told him he’s the greatest father he’s ever known. Noah jokes, but Sharon’s heart is warmed by them all being together at this time of year. Noah tells Sharon he took her advice and reconsidered the job with Adam and Newman Media. He thinks he’s changed and decided to say yes. Nick and Sharon are supportive, and then leave Noah to work on Tessa’s album cover. 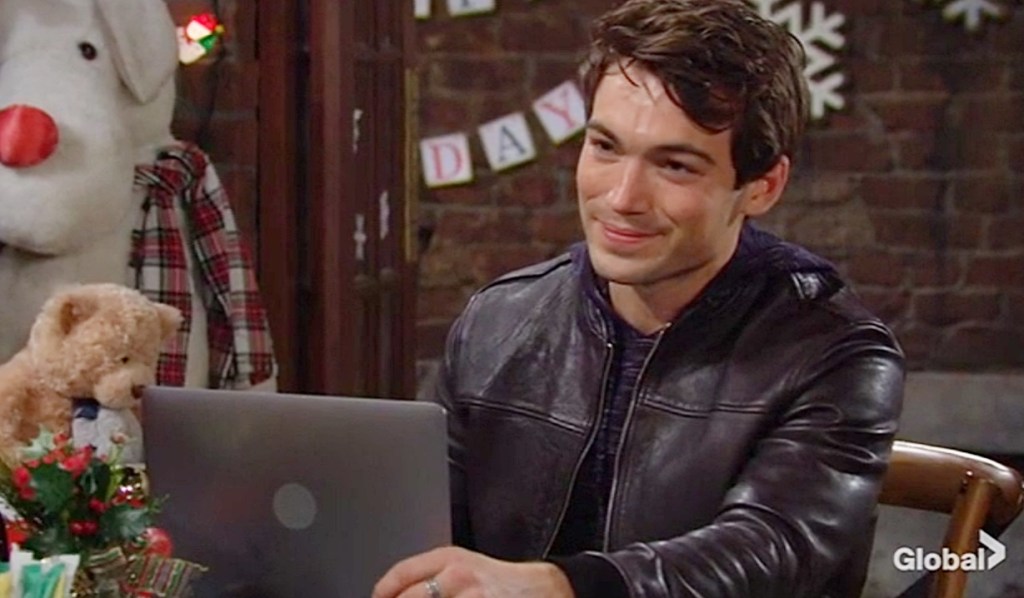 At the penthouse, Chelsea and Connor look at photos on her phone. The doorbell rings so Chelsea answers it – it’s Adam. Connor’s pleased to see his dad, who explains the boy left his comic books in his car. Connor hopes his dad will be there for Christmas Eve and Christmas Day, which they always spend together. After exchanging an awkward look, they assure him they’ll figure something out. Connor heads upstairs and Chelsea asks Adam about the holidays. Adam confirms he’ll be at the ranch. That doesn’t appeal to her, but she’ll go. Adam suggests he come there for Christmas Eve; he’ll leave when Connor goes to bed and then come back in the morning, and when he and Connor go to the ranch, she can join them if she wishes. Even though they’re not together, they’ll always be a family. Connor rejoins them and they update him. Adam leaves and Connor tells his mother he wants her to stay in town for good… and for her and his dad to try and work things out. Chelsea assures the kid they’re still a family and they hug. 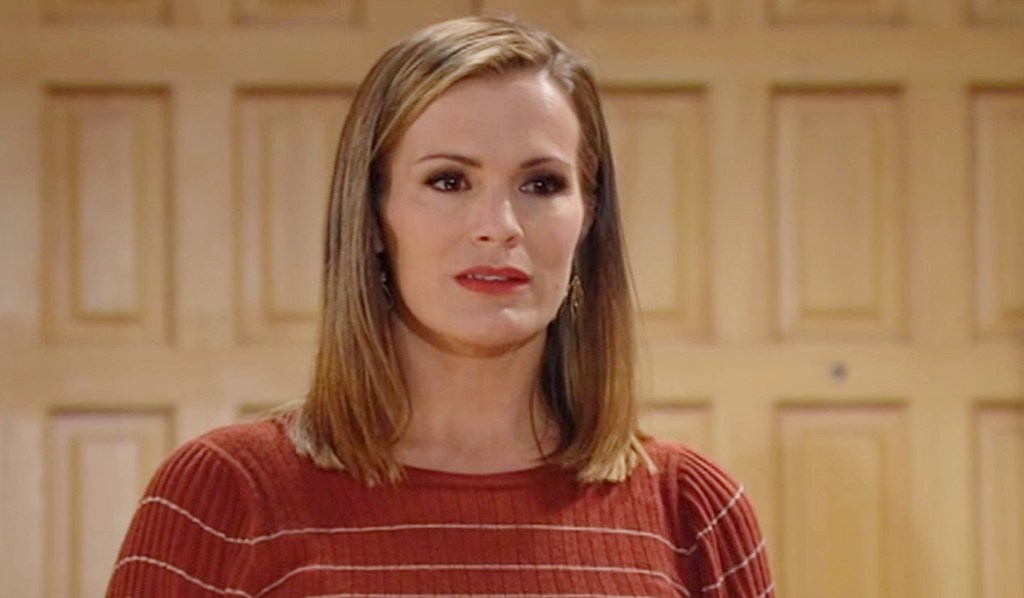 On Crimson Lights’ patio, Sharon tells Nick about her civil conversation with Chelsea, who she figures will stay around as long as Connor’s there. She thinks it’s a great Christmas gift for the boy. Nick relays that he took Phyllis a Christmas gift and they did an exchange. It kind of felt like closure. Sharon imagines he felt some regret. Nick confirms he did, especially since she was talking to Jack when he left. It bugged him. It seems like she’s ready to jump back into dating before he is. Sharon asks, “So you don’t want her to ‘win’ the break-up.” Nick sees her point and Sharon assures it may just be a comforting friendship between Phyllis and Jack. She has something to lift his spirits – she and Rey would like to invite him and Christian for Christmas dinner. Nick will take her up on that. Noah calls them in to see Tessa’s album cover. They marvel that it’s really beautiful. Rey walks in and takes in the scene for a moment before joining them.

At Society, Billy and Lily wonder if Adam or his spy Sally in the blonde wig will show up. Lily points out this is the issue with his plan – he needs to have someone come in at the right time to see what he’s doing or it’s a wash. Billy will be patient and hope lady luck shines upon them. Lily asks, “And if she doesn’t?” They joke about combining an elaborate scheme with a date. Adam walks in and Lily tells Billy, “The eagle has landed.” Billy asks if she’s ready for showtime and starts a loud drunken argument with her. Adam raises his eyebrows as Lily protests that he can’t drive right now and tries to convince him to go home. Billy grits his teeth at her and tells Adam he’ll make him pay before falling down. Lily rushes over and Billy refuses her help. He gets up, dusts himself off, and repeats that he’s not going home with her. He walks out. Adam tells Lily she’s a saint for putting up with him, but Lily lashes back that this is all on him and Victor. 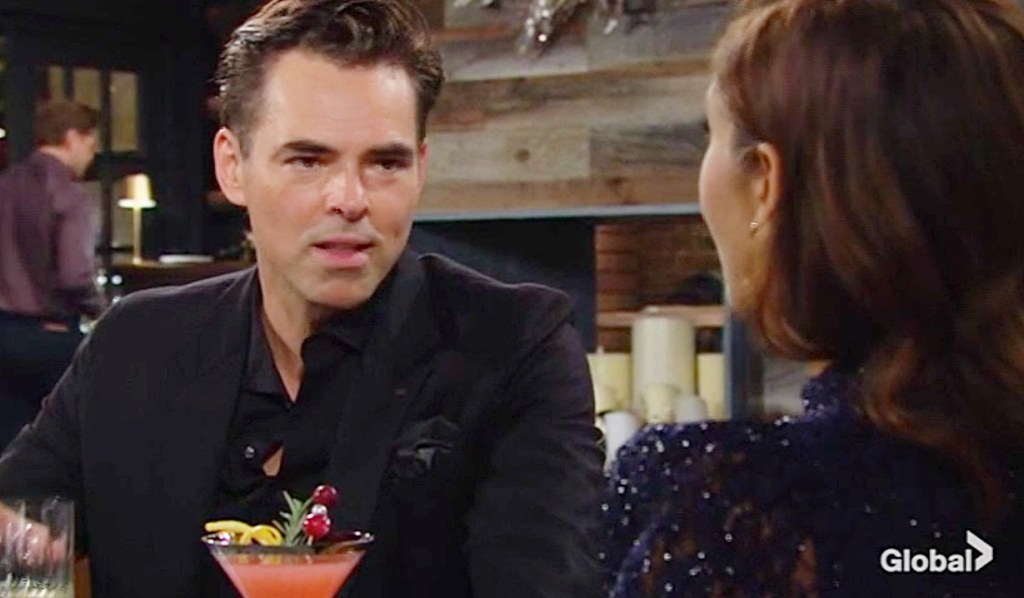 At home, Lily admires Billy’s performance, but admits she got a glimpse into an alternate universe she wants no part of. Billy reassures her. They express their love and kiss before she doctors up the cut on his forehead. Lily starts kissing on him, but he has to stop her. He has another performance to do.

More: Bryton James on his divorce and having kids

Sally arrives at Society, where Adam tells her she missed Billy falling and bouncing his head off the floor. He can’t understand Lily staying with him. Sally muses that some women like the bad boys no matter how hard they try to push them away. She tells him she just came from a very interesting meeting with his father. Adam groans. Sally says the good news is that she won him over. Adam learns that he asked about their relationship, and she told him they were keeping it strictly professional. The bad news is that he knows she’s the one taking the videos and asked her to stop. Adam wonders if his father doesn’t trust his judgment. Sally figures it’s her he doesn’t trust. Adam asks her what she’d say if he asked her to keep following Billy. Sally asks him to tell her more. Adam has a pretty good idea where he’s headed next. 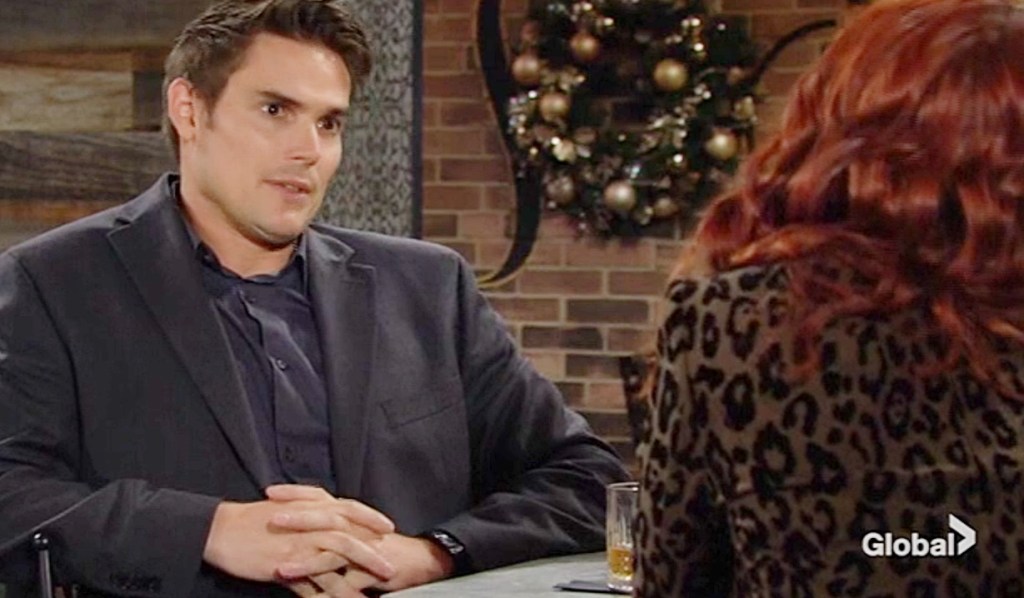 Billy walks into the dive bar and takes up with his old card-playing buddies. Sally shows up in disguise in time to see him playing poker. As he leaves, he pauses to glance at her through the window.

At the penthouse, Chelsea looks out the window and thinks back to happier times with Adam, who promised they’d build a life together. She then thinks of him telling her it’s best they go their separate ways. Connor appears and she asks if he’s okay. He replies, “Not really.” He can’t sleep and says it feels like being back at home, but not really. Chelsea assures it feels different for her too. Connor suggests they go stay at the ranch. Chelsea tells the boy she’s staying there; it’s where she belongs. Hopefully, soon, it will start to feel like home again for both of them.

At the ranch, Victor and Adam drink some scotch and Adam reveals that Chelsea may be joining them at Christmas. He won’t be staying at the penthouse. Victor is glad he’ll be spending time with Connor. He’s glad his son came by because there’s something he needs to discuss with him. They discuss a work matter and then Adam gets a text from Sally saying, “Mission accomplished,” and urging him to watch the video of Billy. Adam continues his conversation with Victor, who looks thoughtful about the interruption.

Nick steps aside with Rey to thank him for the Christmas dinner invite before rejoining Sharon and Noah, who reminisce together about times past while looking at Tessa’s album cover. Rey just stands and watches them.

At home, Billy tells Lily it went as planned and Sally showed up as expected in her very obvious disguise. They start making out to pick up where they left off before he went out.

Next on The Young and the Restless: Mariah and Tessa plan their future.

It’s almost been a year! Look back on Sharon and Rey’s New Year’s wedding in the photo gallery below. 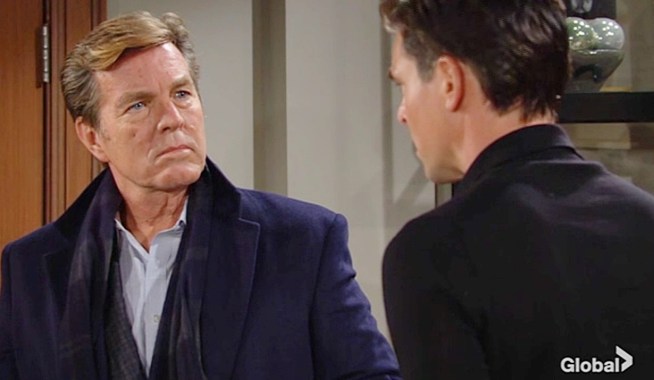 Tessa Stuns Mariah With a Change of Heart on Christmas Eve 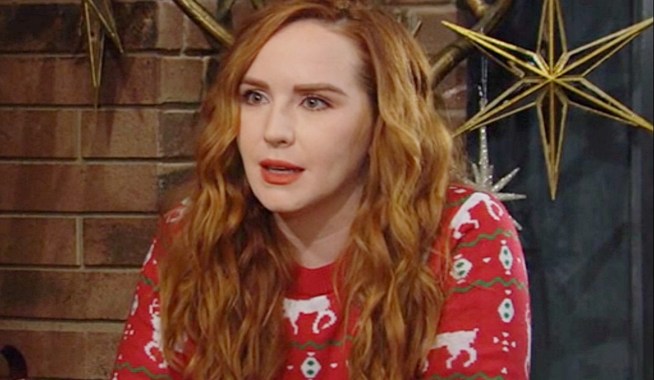