Friday, November 5, 2021: Today on The Young and the Restless, Nikki confides in Adam, Nick smooths things over with Victoria, and Phyllis issues a warning to Amanda. 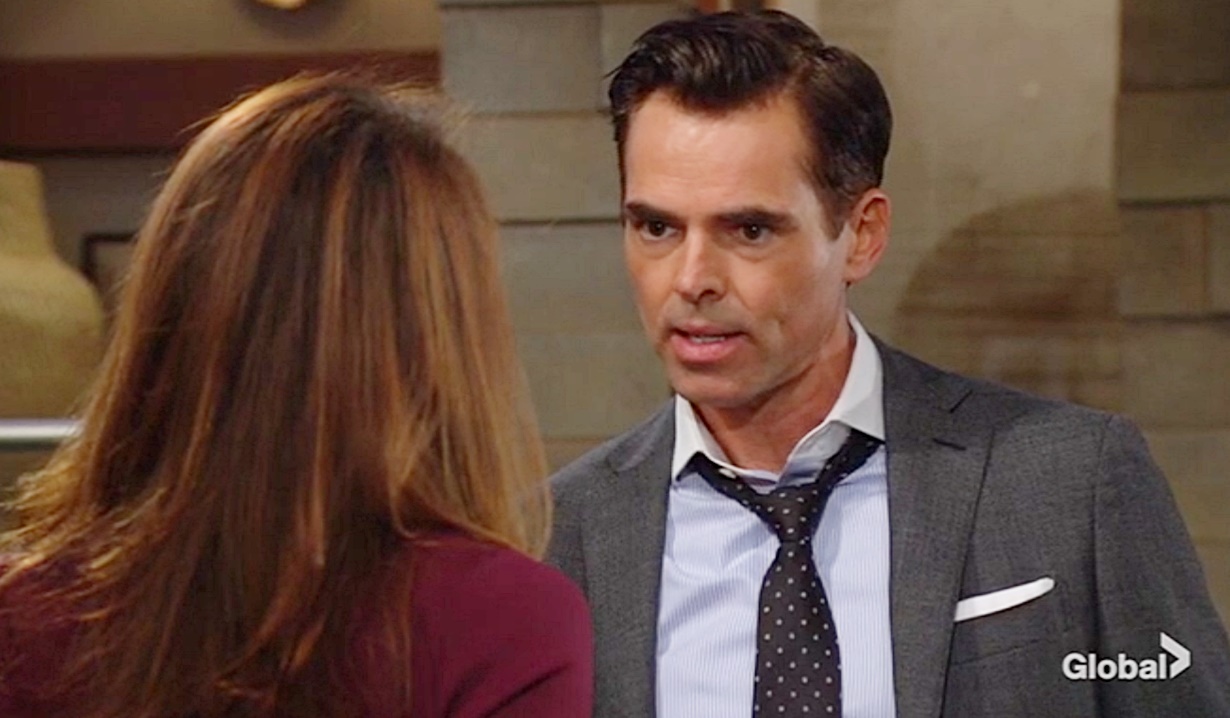 Victoria enters Society leaving Abby a supportive phone message. She disconnects and spots Nick at the bar. He asks if she can sit down and talk for a minute. Nick admits he’s hurting… between the problems with her, renewing his feud with Victor and not getting along with Phyllis. He mentions Abby being busy with the baby, which gives Victoria pause, and continues that he used to feel it was Victoria and him against the world — he really misses that right now. Victoria always used to count on his support too… until he took things beyond brotherly advice. He attacked the man that she loves. Nick wishes he’d handled things differently. Victoria says, “You hurt me, Nicholas. What you did to me was very painful.” Nick didn’t mean it as a betrayal; he was trying to protect her. Victoria counters it was the way he went about it. It was something she’d expect from dad, not from him. Nick would change things if he could. He regrets not being a part of her wedding. “But we can’t go back.” He just wants her to trust the intention behind his actions. 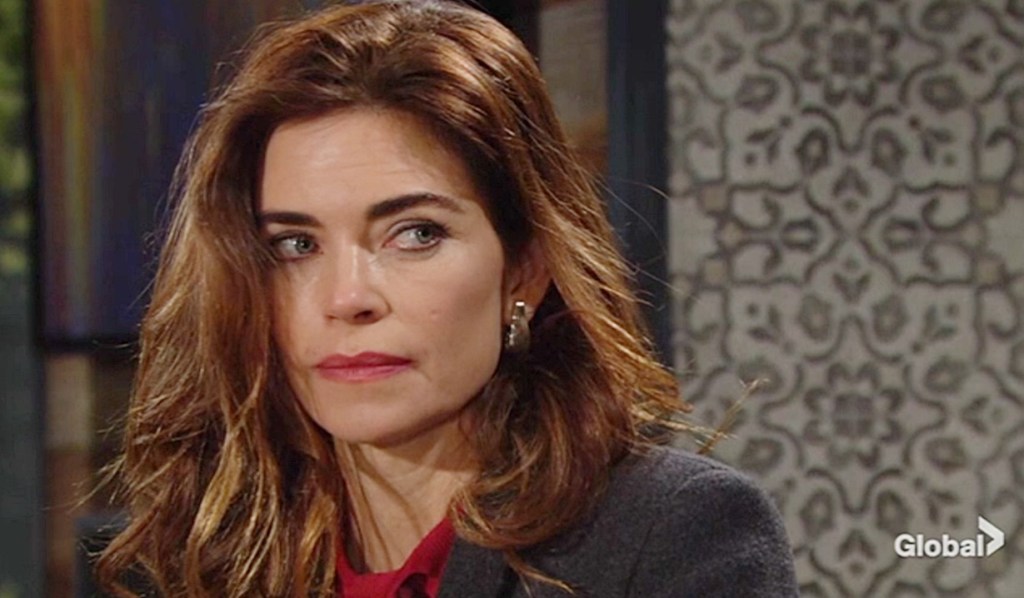 Victoria asks if he’s smoothed things over with dad, but Nick feels he has no reason to apologize. Victoria suggests he try hearing him out, the way she just did for him. Nick only cares about fixing things with her. Victoria asks, “What about Phyllis?” He doesn’t want to talk about her. Victoria questions his trust in her. Nick replies that it depends why she wants to know. Victoria might relish an ‘I told you so moment’ about Phyllis but he still comes first. She urges him to open up. Nick says they seem to have reached a dead end. He supposes Victoria thinks it’s for the best. Victoria will never like her, but she regrets threatening her livelihood. Nick feels that was the beginning of their problems. Victoria philosophizes about life being a gift — Ashland’s illness has put things in perspective. She thinks Phyllis might be the only one who can actually make… and keep, him happy.

At Crimson Lights, Amanda tells Phyllis she’s testifying against her grandfather tomorrow. Phyllis is stunned to hear that Sutton showed up at the penthouse with a recording device in an effort to taint her testimony. Phyllis offers to get the recording for her, but Amanda relays that she and Devon took care of it. Phyllis warns her to be careful; Sutton did everything he could to take out her father. “What makes you think he won’t do the same thing to you?” 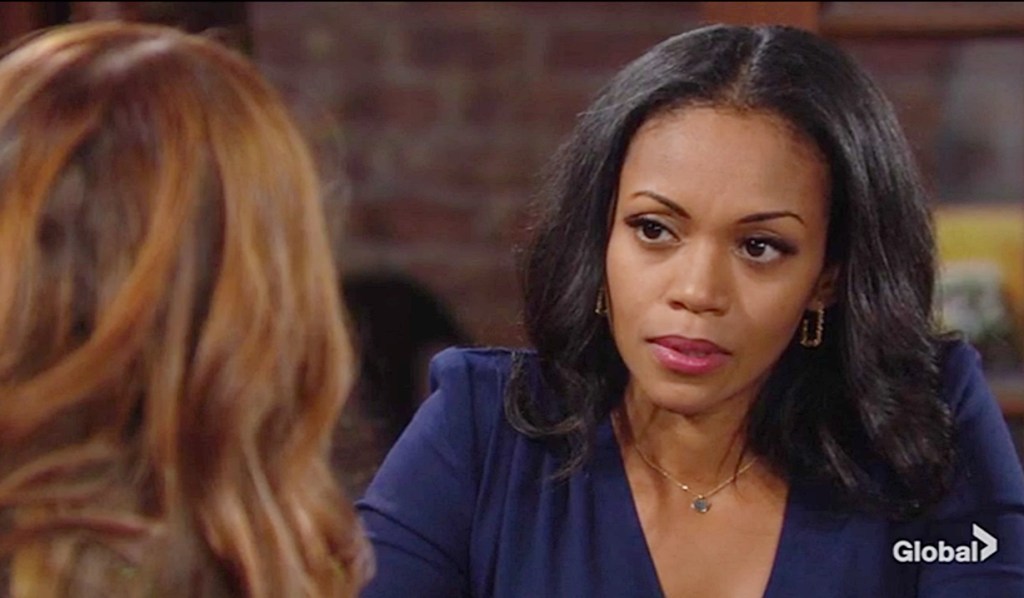 Amanda doesn’t think Sutton’s situation is that desperate, but Phyllis disagrees as she has loads of confidence in Michael’s ability to win the case. Amanda muses that Devon said the same thing. Amanda mentions Devon may not make it tomorrow because of Abby and is forced to explain to Phyllis about Chance and the explosion. Phyllis won’t say anything, but muses that it puts her problems in perspective. Amanda’s shocked to hear that things seem to be over between her and Nick. She thinks it may be just a rough patch, but Phyllis feels it’s death by a thousand cuts. “I guess it ran its course. I guess we just burnt ourselves out.” They’re talking about getting mani-pedis, when Michael calls Amanda and needs to see her. She’s worried about Phyllis, but the redhead shrugs that she only has herself to blame.

Nikki runs into Adam at the ranch. He’s looking for Victor, who isn’t there. Nikki explains he’s with Abby and Adam muses about popping by to see the baby. Nikki warns, “Do not go over to the Chancellor Estate!” Adam asks what is wrong — maybe he can help. Nikki sighs; there’s nothing anyone can do to help. “It’s Chance. We’re afraid he may have been killed.” Nikki explains about the explosion and that they haven’t found his body. She knows Adam and Chance had a bond and this is difficult. Adam muses that the guy saved his life; he seemed invincible. 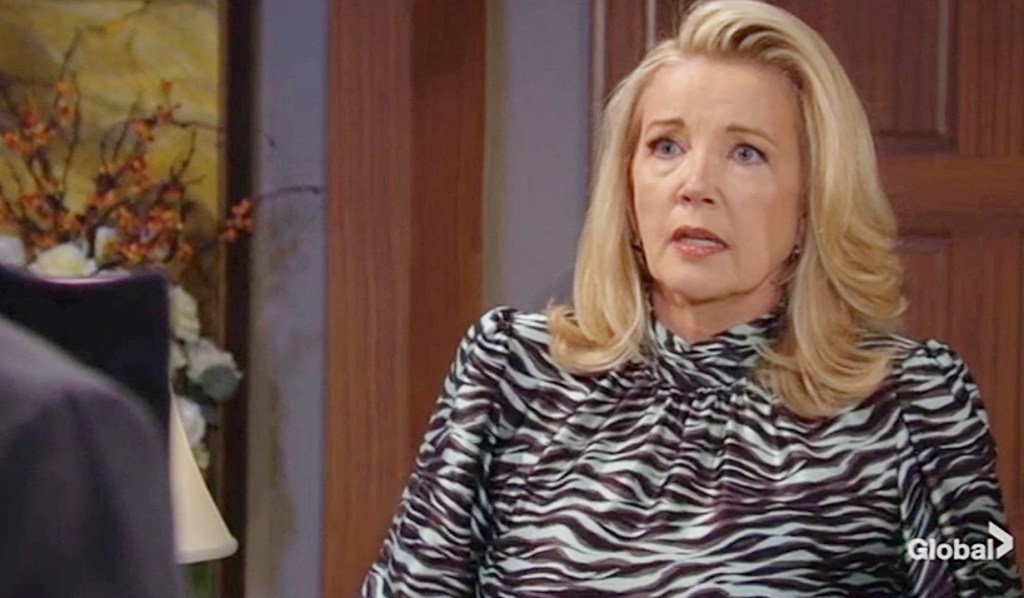 Adam pours a drink and wishes he’d been as good a friend to Chance as he was to him. He can’t imagine what Abby’s going through… and she has a baby to raise. He laments that Dominic will never know what a hero his father is, but when he’s old enough, he will tell him. When Adam’s tempted to backslide, he’ll think about Chance. Nikki tells Adam they won’t share this news with anyone until they get official confirmation. Adam wonders if he trusts him to keep it quiet. Nikki noticed his loyalty to Victoria in Tuscany and hopes the metamorphosis is permanent. Adam insists he’s sincere and is trying like hell to stay on the high road. Nikki feels he’s been successful, but she hears he and Victor are plotting something that could have dire consequences. Adam realizes Nick told her and is frustrated at having to constantly defend himself. It doesn’t matter what people think. He knows what he’s accomplished and knows how far he’ll go to be the man he was always meant to be.

At their apartment, Lily wants Billy to drop his plan since Gaines can’t be trusted. The whole thing is problematic. Their goal is to protect Chance Comm, but Gaines is out for blood. Billy vows he’ll do his due diligence and argues they can’t sleep on this. “We need to be proactive.” Lily distrusts this whole situation and won’t go back on their decision not to publish the story. Billy will just threaten to print it. Lily’s appalled — they’re resorting to blackmail now? “That’s not how we operate.” Billy thinks it’s the best option they have, but Lily argues that Gaines can’t be trusted. “Why would he accept a blackmail scheme that only benefits Chance Comm?” She doesn’t want to provoke Adam and Victor and accuses him of being out to prove something. Lily wants to know if he spoke to Victoria. He says she doesn’t want to meet with him right now and he’s not going to run to his ex and ask her to protect his company. Lily hollers that she’s obviously wasting her breath trying to talk him out of blackmail and angrily storms upstairs as he calls her name. 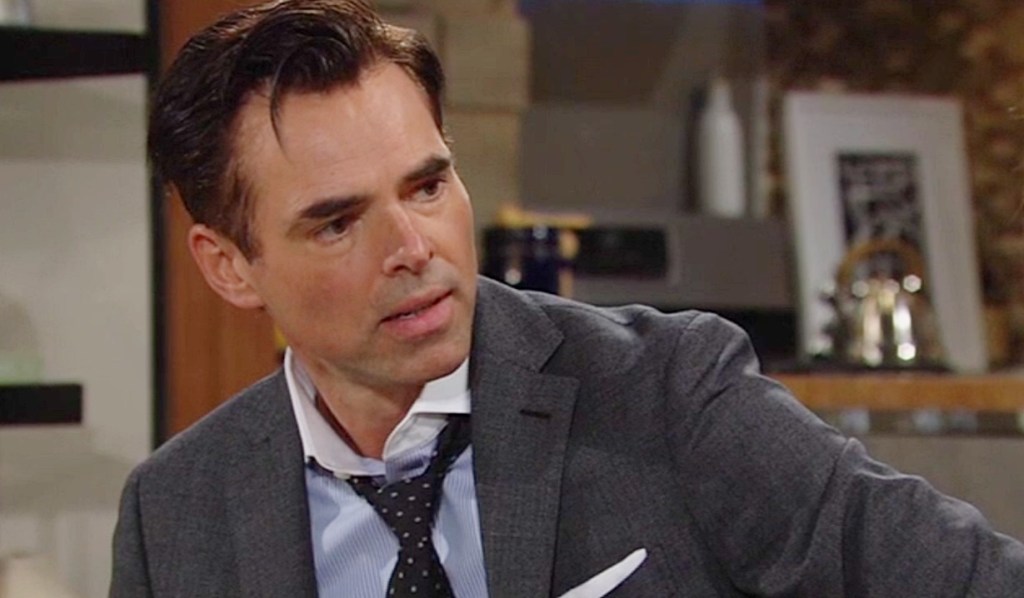 Adam arrives at Society, spots Victoria and Nick and needles about not getting an invitation. He’s glad to see them getting along. Victor’s private investigator comes in to meet with Adam. Nick’s suspicious, but Victoria tells him it’s nothing for him to worry about. He gathers she has some idea what’s going on. She does, but doesn’t want to know the details, and warns Nick shouldn’t get involved. Nick likes to get involved, so Victoria admits it has to do with going after Chance Comm. Billy drew first blood when he interfered with her wedding. Nick agrees, but it sounds like she’s on Adam’s side, which is odd. Victoria wouldn’t go that far, but is grateful to him for saving the wedding ceremony. Nick admits he offered to play peacemaker between him and their dad. He’s just glad the two of them are talking. Victoria gets her food and leaves. 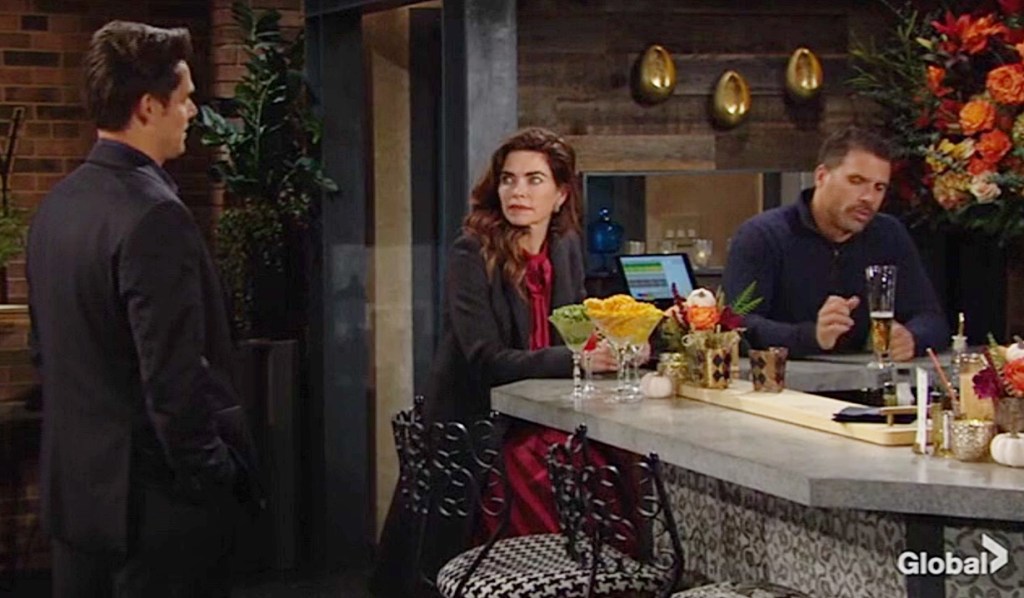 More: Deacon Sharpe is up to his old tricks

Adam’s investigator leaves and he joins Nick, who asks him about it. Adam says it’s Newman Media business. He assures him he’s not going rogue or planning a sneak attack. Nick snarks at Adam about being ‘in’ with their father while he’s now an outcast. Adam makes a remark about what the family is going through right now and Nick asks, “What does that mean?” Realizing Nick doesn’t know about Chance, Adam sighs, “Nothing is ever easy with the Newmans, right?”

More: Y&R Rant: We’ve had it with the endless Abby story

At the hotel, Phyllis contemplates calling Nick but doesn’t.

Next on The Young and the Restless: Billy turns the tables on Adam.

As Adam contemplates the death of the man who saved his life, look back on Chance Chancellor’s life in the photo gallery below.

Billy Prepares to Turn the Tables on...

Billy Turns the Tables on Adam —...