Tuesday, November 2, 2021: Today on The Young and the Restless, Devon and Mariah both grow concerned about the baby, Victor and Ashley recall the past, and Abby searches for Chance in a dream. 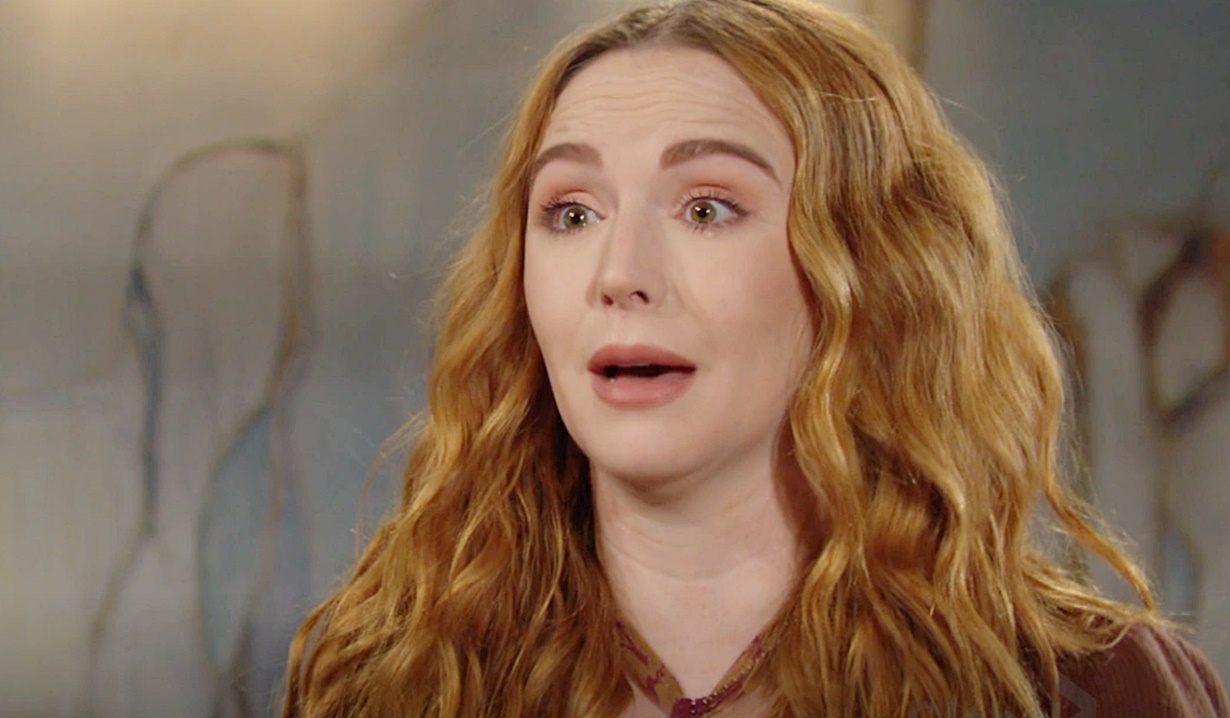 At Crimson Lights, Devon just can’t believe that Chance could be dead. Tessa and Mariah debate whether he could have survived. Devon thinks Abby will need their help. Mariah tells Dominic that he’s been such a brave little boy and goes over the fear and anxiety she felt when held captive. Tessa thinks the baby is fine, but the situation might have brought up some trauma for her. Mariah asks Devon to tell Tessa she’s fine. He muses that Tessa’s very good at looking out for her. Mariah insists this isn’t about her; she doesn’t want the baby to absorb the negativity in that house. Tessa and Devon reassure her. Tessa wants to go back to the hotel and rest up, but Mariah won’t leave Dominic. 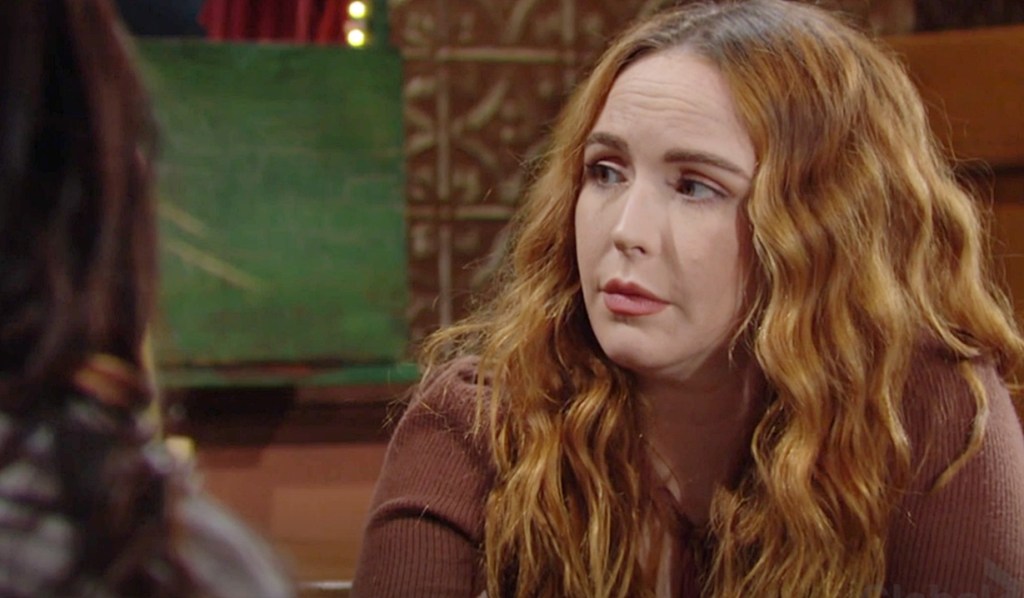 At the Chancellor Estate, Ashley sees Sharon off at the door. Victor hope she was able to help Abby. They marvel at being helpless in this situation. The Mustache muses that all his money and power can’t fix this for her. Ashland declares this a mother’s worst nightmare. Victor confides that he’s called Nate Hastings to come over. Ashley recalls her own break with reality and admits she’s a little afraid. Victor hopes she won’t go through that and vows they won’t abandon her. 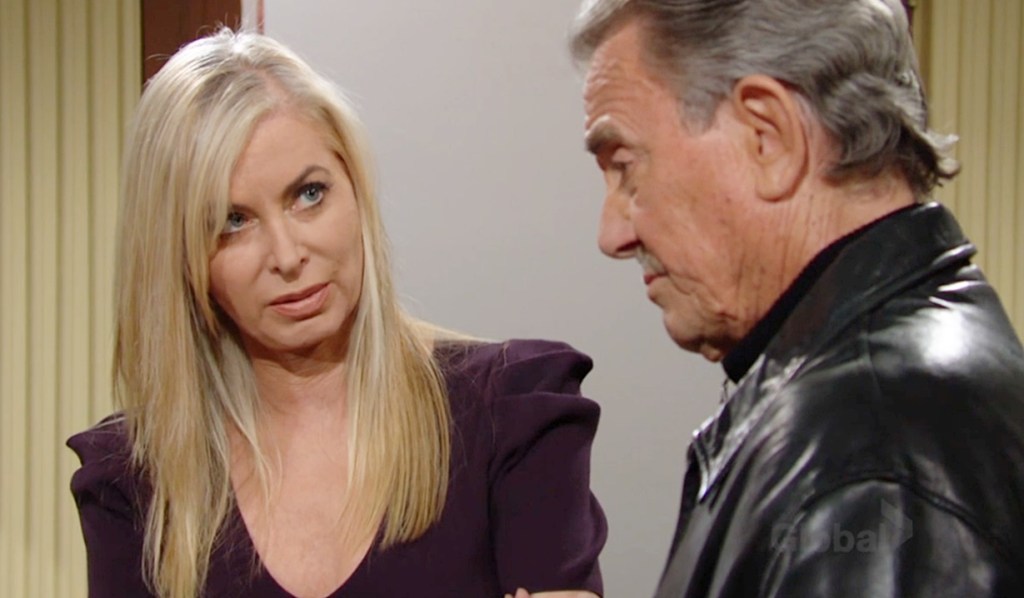 Nate arrives at the Chancellor house and Victor updates him that Abby’s not well… she’s in the kitchen with Ashley. He thinks she may need some low-dose anti-anxiety pills. Victor heads to the den and Abby and Ashley appear. Abby guesses they called Nate to give her a sedative. She doesn’t need a doctor. As her friend, Nate has been where she is, and just asks her to hang out with him for a few minutes. Ashley leaves the room. Abby tells Nate that they found Chance’s watch and ring, but they didn’t find him. She knows he’s alive. “He’s not dead!”

At Crimson Lights, Devon gets a message from Ashley that Nate is at the house and she wants him to bring the baby home. Mariah questions if it’s a good idea. Tessa and Devon assure her she has nothing to worry about. Devon and Tessa exchange a concerned look as Mariah heads out the door. Tessa follows.

Sharon comes in as Devon’s preparing to leave and they discuss Abby, who won’t talk about her feelings. Devon understands, but has something that might bring Sharon some joy.

At the Chancellor Estate, Abby isn’t convinced that Chance is gone. Nate thinks it’s common for people to not want to let go of hope. Abby sees things clearly; nothing has really changed. Chance was gone before and he still is; she knows he’ll come home. Nate says he understands and Abby snaps, “Stop! Stop trying to placate me!” Nate thinks she’s over-reacting because she’s running on fumes. He grills her on eating and sleeping and insists on having anti-anxiety meds sent over. Abby needs to be alert and awake for Dominic, but Ashley appears and promises to stay. Abby agrees to go rest, eat and take the medication. 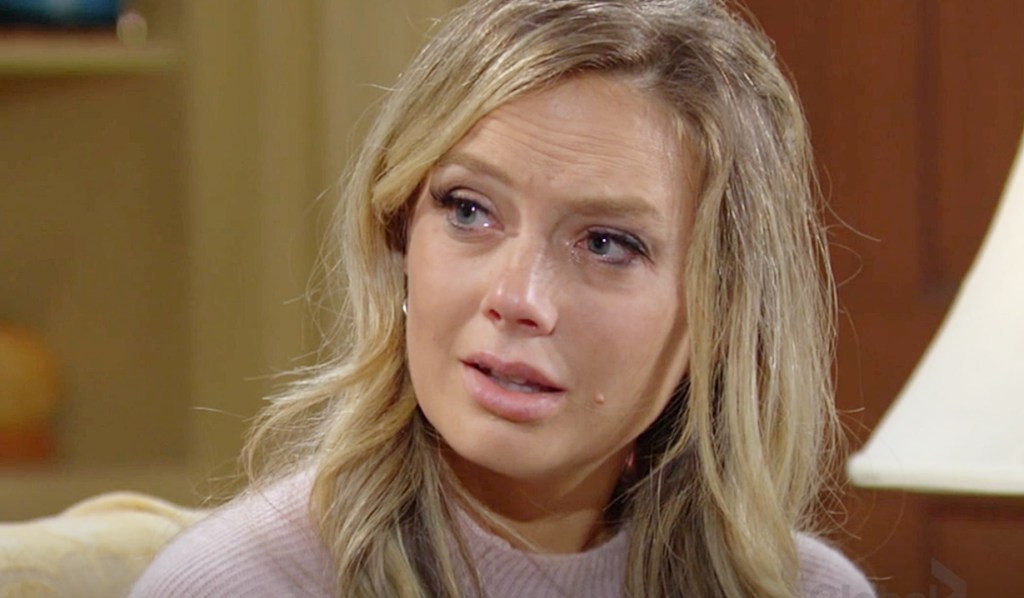 Nate tells Abby that the love she felt for Chance will always be a part of her. She reminds him they don’t know that he’s gone for certain. Nate apologizes and urges her to rest. Abby murmurs, “Chance you can’t be gone.” At the door, Victor and Ashley see Nate off and thank him. 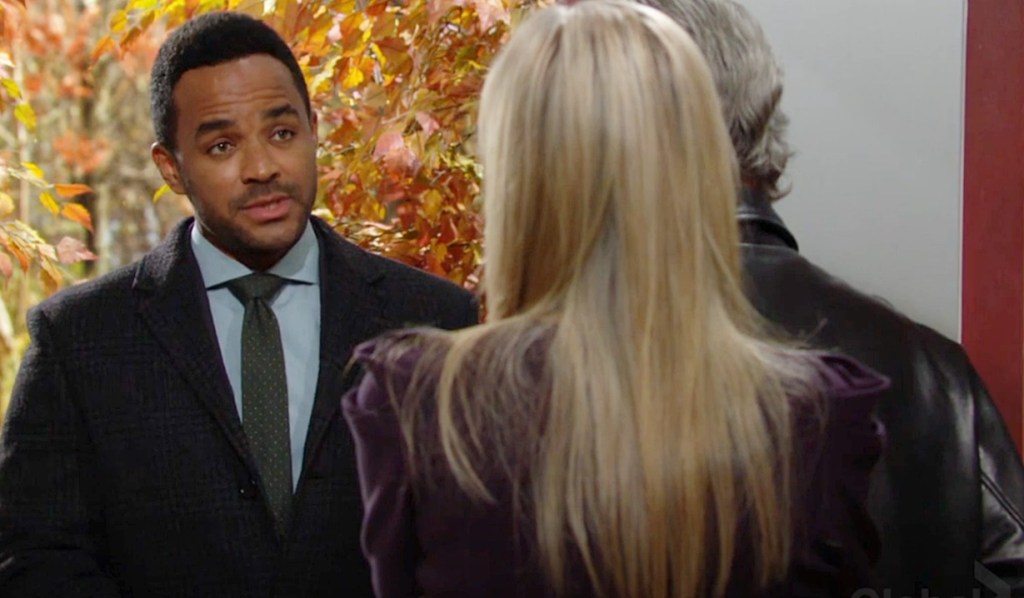 After, Ashley decides to make some food and Victor watches Abby doze on the sofa. In her dream, Abby awakens in a dark room and walks out into a bright light to find Chance. She ends up at the hotel where she first helped him distract a bad guy. She implores, “I need you here! Show me that we’re in this together!” She recalls their chemistry and hiring him as security for the hotel. He was supposed to leave the danger behind. 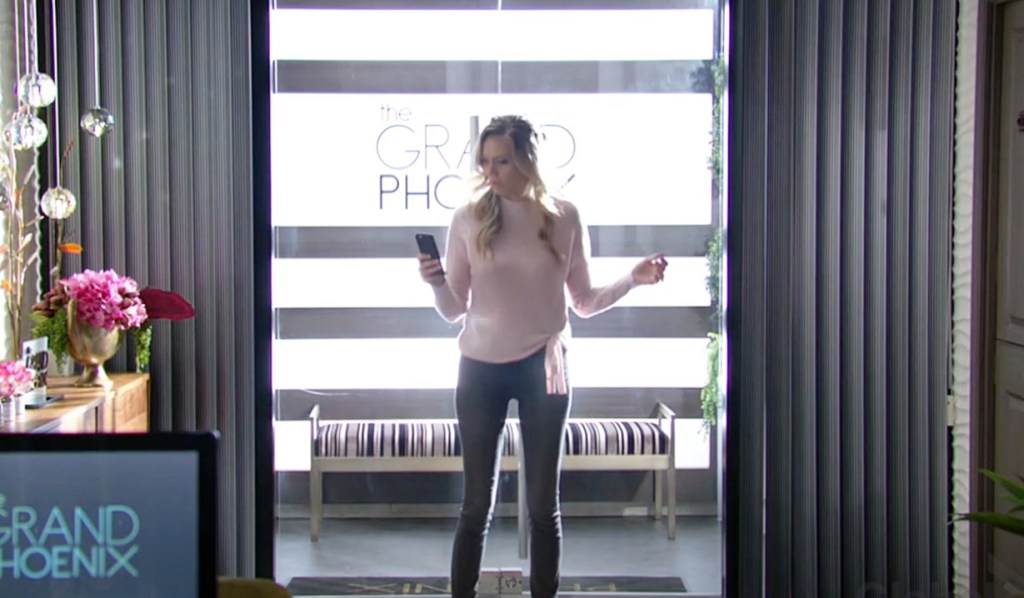 Suddenly, Abby’s at Society and remembers it was where she and Chance shared their first kiss. “Please Chance, come kiss me now.” She warps to a suite in the Grand Phoenix. They went there after their ice-skating date and made love for the first time. She rages about him making promises right there and on their wedding day. “How could you leave? How could you just leave me to go through with this surrogacy?!” Abby knows he’ll come back and is determined she will find him. 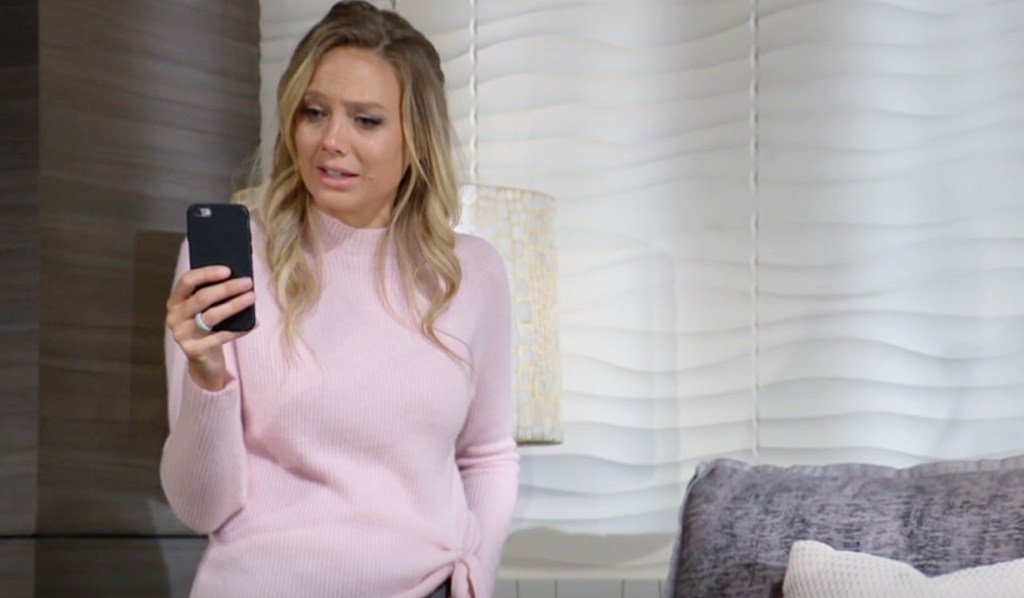 In the hotel suite, Marah tries to distract herself with work, but admits to Tessa she’s thinking about the baby; she hates leaving him. Tessa gives her a look and confesses she’s a little worried. She seems to feel she’s the only one who can take proper care of Dominic. Mariah argues that she has a bond with him. Tessa’s concerned the instinct to protect him is going to end up causing Mariah pain, which breaks her heart. Mariah doesn’t think she needs to be concerned. Tessa presses, “Am I right? Do you feel like you’re the only one who can take care of Dominic?” Mariah sighs. “I’m the one who carried him all those months.” She was with him locked in that room. Tessa reminds her other people have special connections to Dominic. Mariah understands, but Abby needs a break, Devon’s contribution wasn’t the same as hers, and she’s not sure Ashley and Nina could love the boy like she does. Tessa tells her it’s not up to her who gets to take care of him. Mariah knows this, but she has thoughts and feelings about it, and she admits that she doesn’t think this is how it should be. 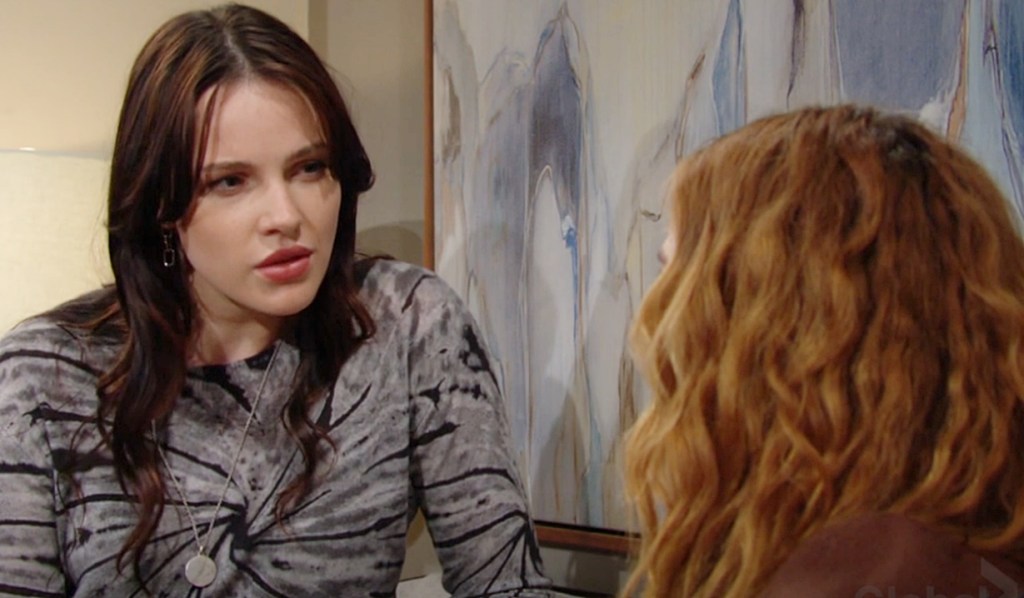 Mariah rants about the baby living in a home full of grief and trauma. Tessa says he’s safe and loved. Mariah snaps that this wasn’t the deal. Tessa reminds her no one expected this, and life is unpredictable — she can’t control everything. Mariah hollers that she can keep him safe! She promised to protect him and feels she’s failed. Mariah carried the baby because she thought she was helping to build a family but now he’s surrounded by grief and loss. She didn’t keep her promise to protect him. Tessa asks, “Are you saying you wish he was your son and not Abby’s?” Mariah confesses that she can’t help but think that’s how it should have been. Tearing up, Mariah says she’s not acting on it, but it’s a thought that comes into her brain once in a while. Tessa feels they should examine that and then decide how to proceed. Mariah’s surprised she didn’t run for the hills. Tessa says, “Never.” They express their love. Tessa vows they’ll work though this together, but is dismayed when Mariah jumps to complete some work. 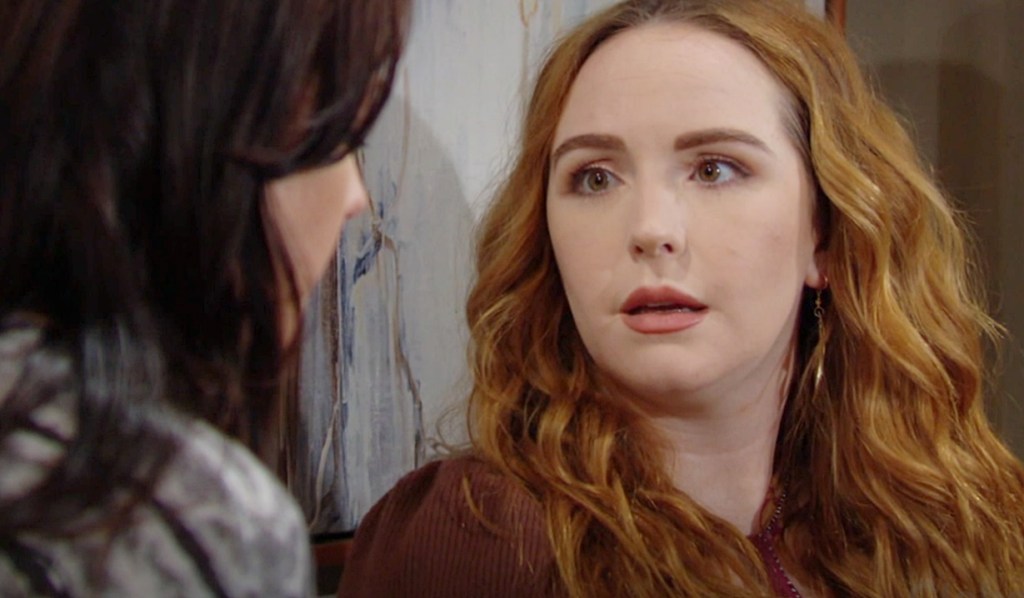 At Crimson Lights, Sharon coos over Dominic and tells Devon he’s lucky to have him in his life to look after him. Devon feels he’s the lucky one. It’s like he’s getting to make up with the time he didn’t get to spend with the child he was going to have with Hilary. Sharon muses, just like Dominic won’t get to spend time with Chance; they’re a perfect pair. They sit down to discuss whether the baby will help Abby get past her grief or whether she’ll fall apart as Devon did when Hilary died. He just hopes she doesn’t go through a self-destructive phase. 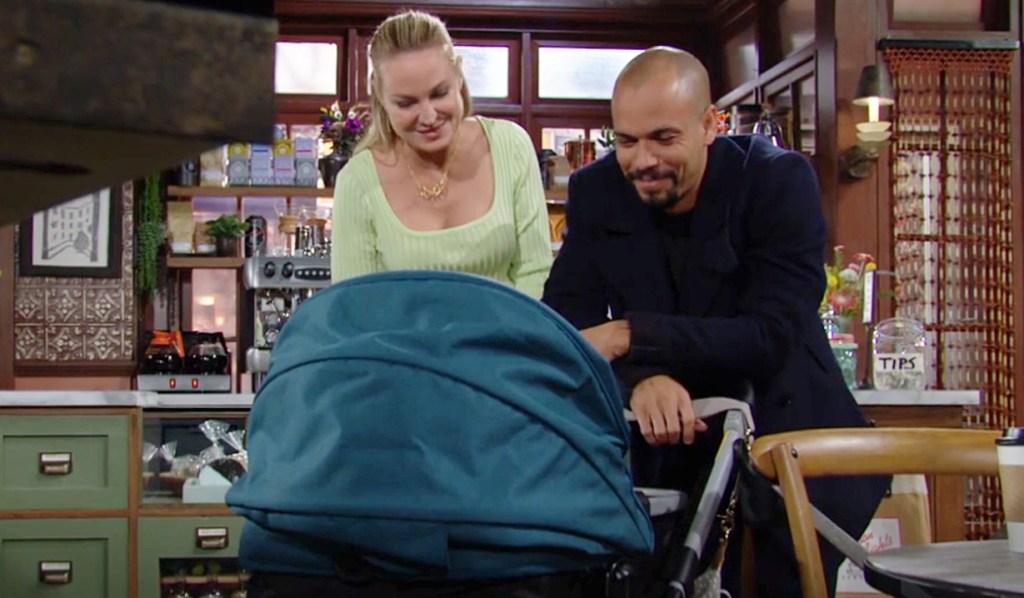 More: Who will die on Station 19, Grey’s Anatomy’s shocking crossover?

Nate joins Sharon and Devon and admits he’s concerned about Abby. Luckily, he was able to convince her to eat and have a nap. Devon admits he’s worried about Dominic absorbing the negative energy in the house, but Nate feels it would be good for Abby. Devon will take him to the park first. 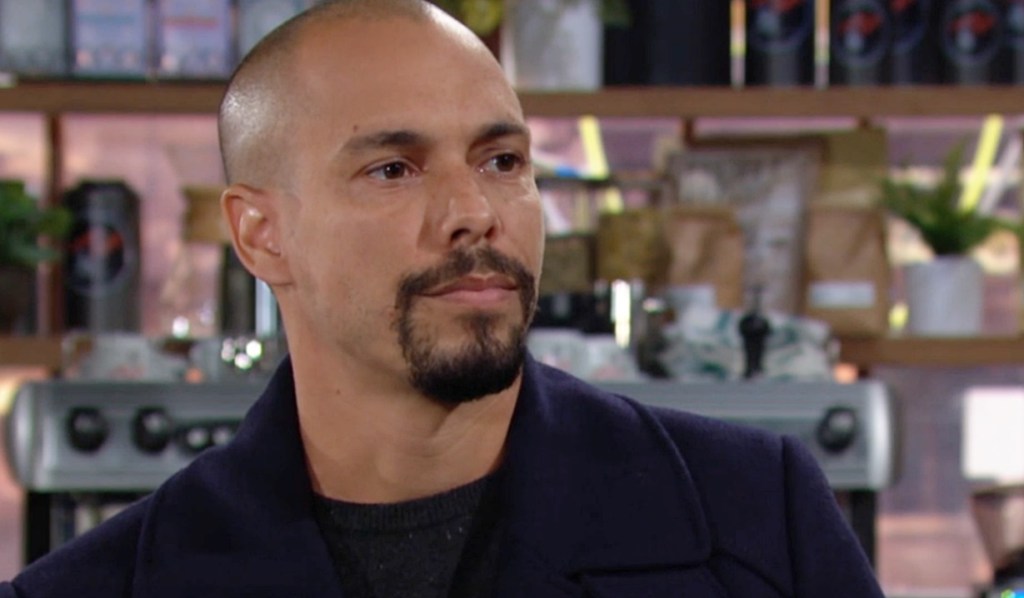 Still in her dream, Abby lands in Chancellor Park. She finds the baby Christmas ornament and knows Chance is there. She cries. How could he go on this dangerous mission? Didn’t he love her enough to stay? She believed in them but doesn’t know what to believe now.

Devon strolls into the park with the baby and seems to have a weight on his mind.

In their hotel suite, Tessa watches Mariah work on the laptop and looks concerned.

At Crimson Lights, Sharon takes out her phone and looks at a photo of Cassie.

At the Chancellor Estate, Abby awakens when the baby cries. Devon has just brought him back. She picks up the baby and soothes him.

Next on The Young and the Restless: Billy and Lily receive a surprise visitor.

Tessa’s standing by her woman. Find out why by looking back on Mariah and Tessa’s love story in the photo gallery below.

After Walking Out on Their Lunch...

Phyllis and Nick Reel After a...