Thursday, October 21, 2021: Today on The Young and the Restless, Adam has a spat with Chelsea, Devon doles out advice, and Mariah reveals she's reached an important decision. 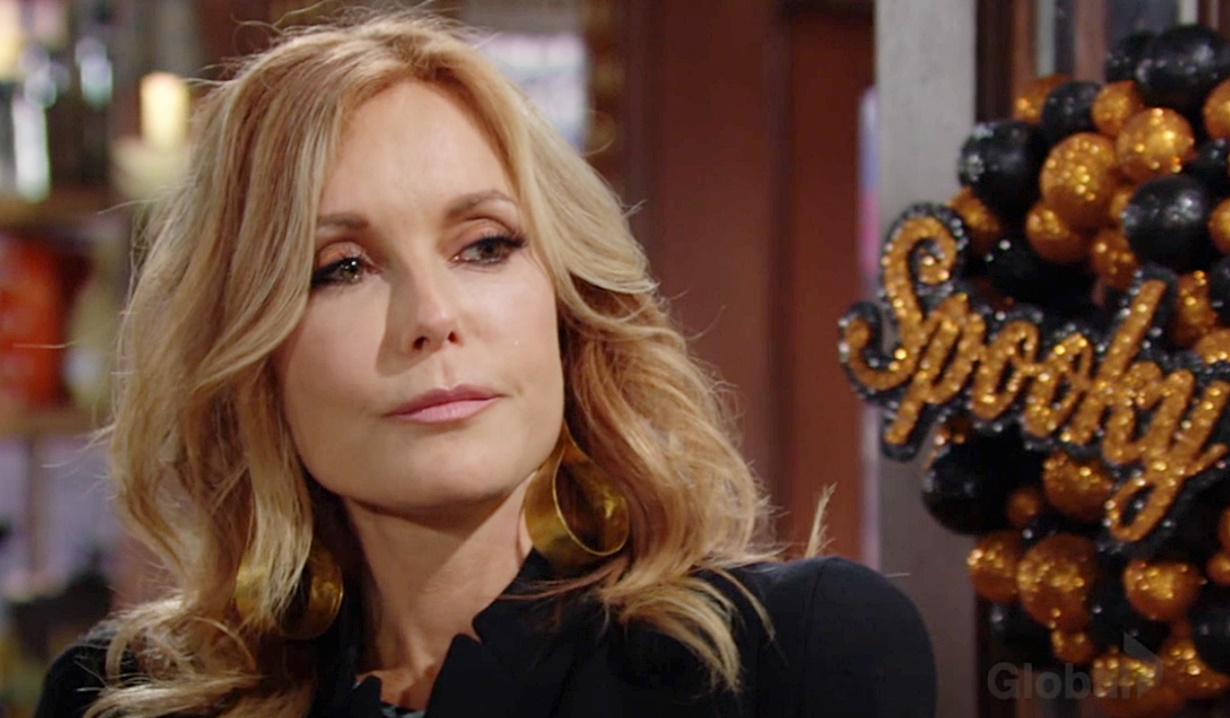 At Crimson Lights, Adam can’t wait to see what Sally has planned next for Newman Media. Chloe spots them and walks over. She remarks on them being together and asks if something happened in Tuscany they want to fill her in on. Adam cautions Chloe about letting her imagination get the best of her, and Sally insists they went their separate ways after landing and coincidentally ran into each other again there. Chloe hedges that there have been some new developments with the dress. Adam leaves them to talk.

Sally’s stunned to hear from Chloe that the new developments are “terrible.” Chloe warns, “There has been some personal fallout from your plan, and I think you should be prepared for what’s coming.” Sally learns that Lauren tore her to shreds and she’s concerned she’ll turn on her. Chloe feels she could have given her a heads-up, but Sally argues that she would have alerted Victoria to their scheme. Chloe doesn’t want to call it a scheme. Sally feels terrible since Lauren is a part of her family and wants to help fix it. Chloe says it’s too late, since she confessed her role in it. Sally repeats if there’s anything she can do, she will do it. Just then, Lauren appears and tells her, “Oh, I think you’ve done more than enough already.” 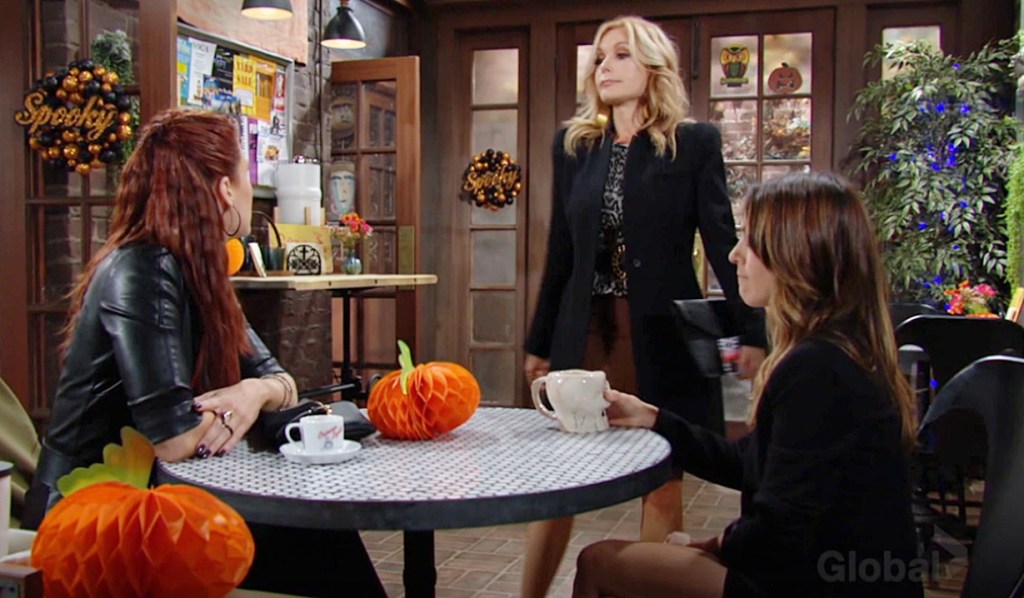 Sally tells Lauren, “You’re mad. I get that.” Lauren thought she’d respect even though she had to fire her and reads her the riot act for stealing her designer’s dress and replacing it with her own. Sally argues she didn’t steal it, she moved it — and Victoria had the chance to decide which dress she wanted to wear. Lauren sniffs that Sally loves to give these speeches proving herself, but the truth is she’s only out for herself. She’s going to alienate everyone here sooner or later, and then maybe she’ll realize the best thing she can do is leave. Lauren certainly won’t shed a tear. Sally hopes one day she’ll see her differently and walks off. Chloe asks Lauren if she’s done with her too, or will she give her a chance to repair this. Lauren has accepted her apology; what she did was not on the same level as Sally. She urges Chloe to cut Sally loose or she’ll end up in the same position — stabbed in the back! 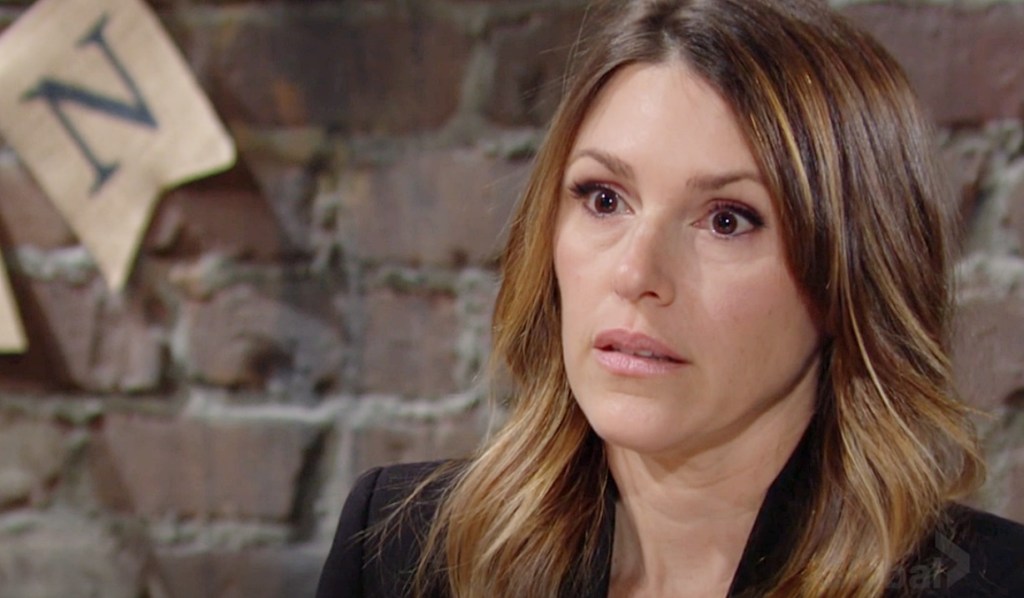 Tessa arrives at her and Mariah’s suite and calls out that she’s back and so excited to see her, but Mariah’s not there.

At the Chancellor Estate, Mariah has stopped to drop something off and the nanny tells her Abby’s at Society. Mariah wants to check on Dominic, but the woman just got him to sleep. Mariah suggests she take a breather and she’ll watch over him. The nanny agrees. Mariah goes to the baby and tells him, “I’m back. Finally. I am so happy to see you.” She picks him up and holds a pretend conversation with him. Maria tells the baby she’s trying hard to work through her issues. She has a connection to him and doesn’t know how to let go. “I just have to figure out a way to move forward through all this.” Mariah tears up over how hard it is. “Not just on me. It’s been hard on everyone around me. Especially Tessa.” She tells Dominic a secret — when Tessa was gone she got really scared; she worried they weren’t on the same page about their future. “I’m still scared.” After putting him back in the bassinet, she thanks “Bowie” for the talk. It was almost like old times. The baby coos as she walks to the door, so she decides to stay longer. 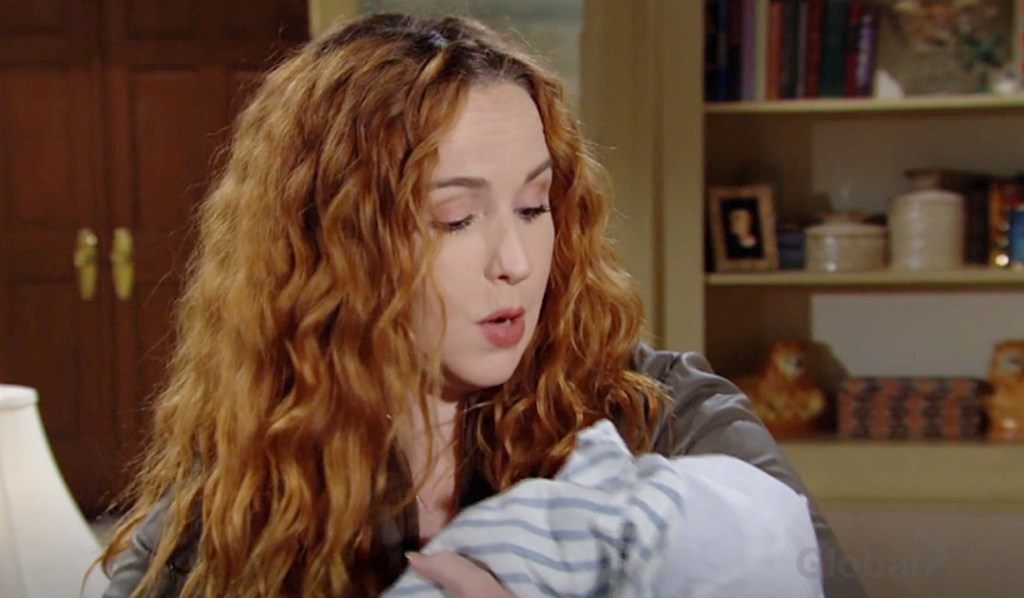 In the suite, Tessa calls Mariah and gets her voice mail. She lets her know she’s back and jokes about there being no welcome home party. Tessa’s wiped from the trip, so she isn’t going anywhere and hopes to see her soon.

At Society, Devon watches as a distraught Abby deals with her chef telling her she’s leaving because she wants to create her own menu. Abby reaches a compromise with the young woman and Devon compliments her on how she handled it. Abby sighs that Lola was a superhero; she misses her not just as a chef, but as a friend. Talk turns to Chance and Abby laments how hard it’s been not hearing for him for weeks and months on end. “He hasn’t even gotten to hold his own son.” She cries in her sleep and cries out Chance’s name. During the day she keeps herself busy, but at night… “I don’t know how much more of this I can stand.” She recaps that she never expected this when they got married — now that they have a baby she’s even more afraid. Devon reassures her that Chance is doing everything in his power to come home to her and their son as soon as he can. She has every right to feel frustrated. “You can handle anything life throws at you.” 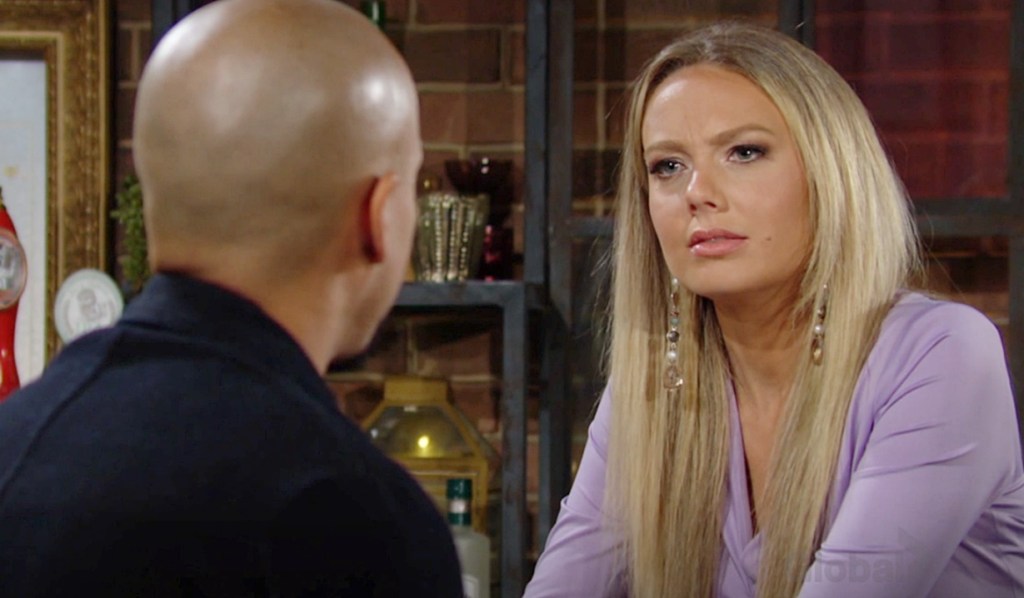 At the hotel, Adam takes a call from Chelsea and updates her on the wedding and Sally’s dress hitting it big. They discuss an email from Connor’s teacher that he handled on his own. He recommended that he be accelerated in math. Chelsea agrees, so Adam asks, “What’s the problem?” He concludes the call in frustration when Devon appears for their meeting. Adam fills him in on Chelsea picking a fight because she’s not there to parent Connor. Devon admires the way Adam has stepped up for his son. Talk turns to Nick’s reluctance to talk to Adam and Victor about business. Adam hopes it won’t make things difficult. After their meeting, Devon tells Adam the building isn’t the same without him and urges him to call Chelsea back and make nice. “Take the high road.” 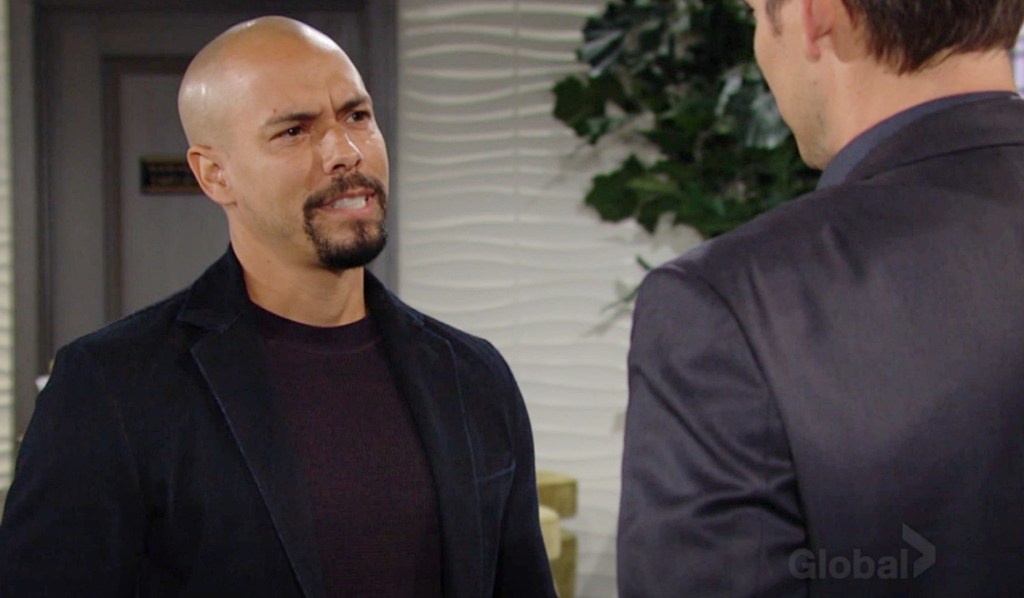 Abby returns home to find Mariah reading a book to the baby and watches for a minute before saying, “Well this is a nice surprise.” Mariah hopes she doesn’t mind her dropping by. Abby reiterates she’s welcome there anytime. She doesn’t want there to be weirdness between them. Mariah quips, “Speaking of awkwardness, I have breast milk for you.” Abby still plans to switch to formula after this batch. “I hope that’s not a problem.” Mariah loves being able to provide milk for Dominic — it made her feel like she had a unique role in his life — and it’s hard to hear it’s no longer needed, but she understands. She confesses she didn’t realize how intense this would be and she has to find a way to get back to being herself. Mariah stayed home from Italy to do some deep reflection. Abby asks if she reached any big conclusions. Mariah says she has. The doorbell rings — it’s Devon.

Devon joins them and Mariah says she loves them both; they’ve been incredible through this whole ordeal. They all have a bond and she knows they’ve been worried about her. She’ll admit she’s had a hard time letting go of Dominic, but she’s working on it. Mariah hopes they’ll believe her when she says she’s doing much better now. Abby wants her to have an important role in her son’s life, but only when she’s ready for it. Devon thinks they should call themselves the Baby Dominic Crew now. 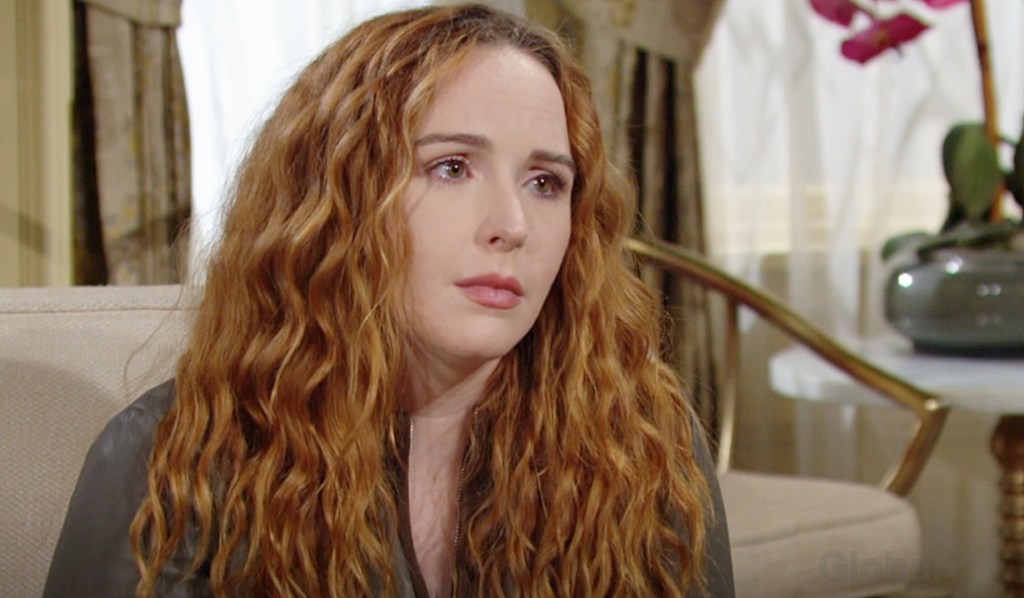 At the hotel, Adam calls Chelsea to apologize for making the decision about Connor without her. If they’re going to co-parent they’re going to need to talk to each other. He asks about her mom and when she’ll be able to come back to Genoa City. Sally walks in as Adam says, “Well if you want to come back, I don’t understand the hesitation, Chelsea.” Chelsea hangs up on him. Sally asks if he’s okay; he seems upset. Adam is fine and asks, “What do you want?” 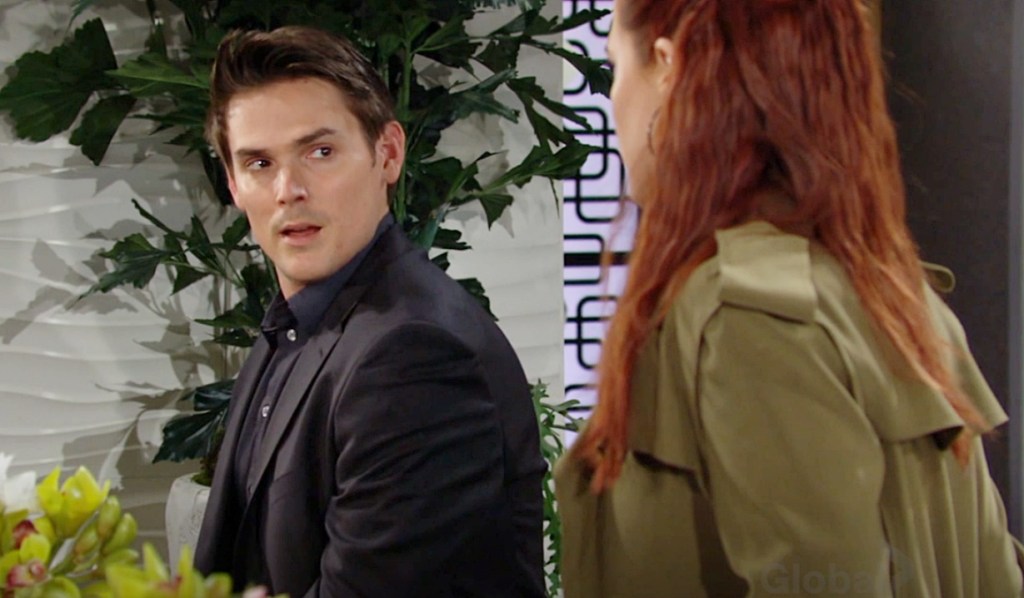 Sally informs Adam she had a run-in with Lauren over switching the dress. Adam shrugs, “Don’t worry about it. You don’t work for Lauren.” Sally admits it didn’t feel good. He tells her not to beat herself up about it. She won this round, Lauren may win the next one. Sally feels better and wishes she could help Adam. He has a meeting and will see her later.

More: Courtney Hope gets startling marriage advice ahead of wedding

At the Chancellor Estate, Devon and Abby agree that it seems Mariah’s on a better path. Abby says seeing him and Mariah turned her whole day around. She assures him he doesn’t need to stay; she’s okay. Devon will go, but he’ll come back to check on her. “You can count on me.” Abby thanks him. Once alone, Abby says, “Chance, where are you? Please come home.”

More: Abby’s about to get shocking news about Chance

Mariah enters the hotel suite to find Tessa asleep in the bed. She smiles at a card from Tessa explaining she brought her a gift from Tuscany. Mariah opens the present — it’s a little stuffed bear in a gondola outfit. Mariah grins and walks over to sit by Tessa, who awakens. 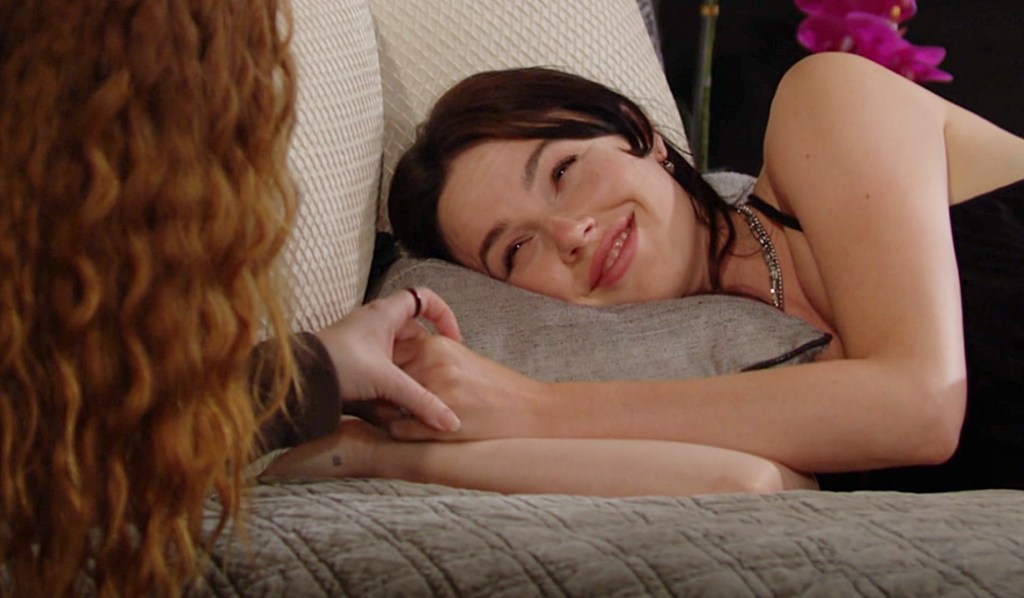 Mariah and Tessa reconnect and laugh over the stuffed bear. They express how much they missed each other. Mariah reveals that she’s made some important decisions. She’ll tell Tessa about them later. “For now, sleep.”

Next on The Young and the Restless: Noah surprises Sharon.

Relive all the glorious moments from the nuptials through Ashland and Victoria’s wedding album in the photo gallery below. 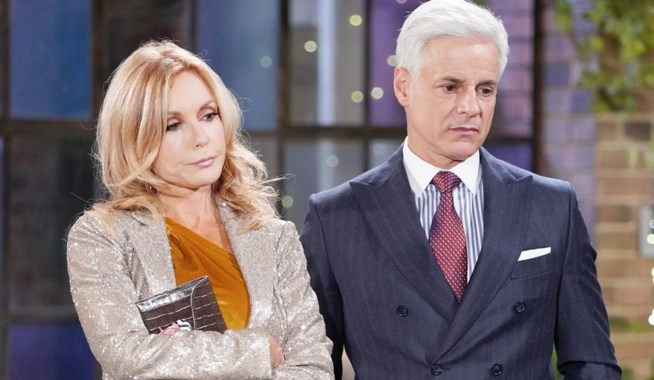 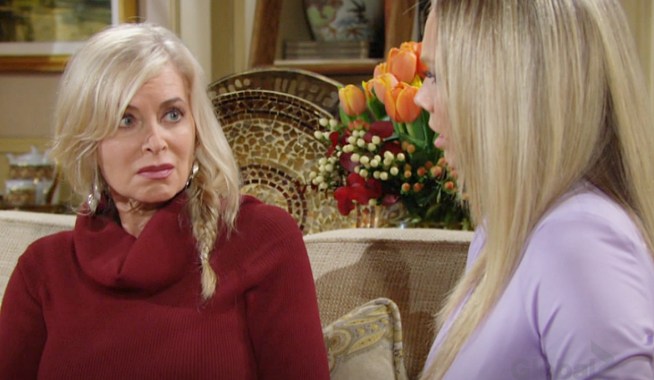