Thursday, September 9, 2021: Today on The Young and the Restless, Adam hits a nerve, Nick and Sharon discuss their relationships, and Sally indulges in a fantasy. 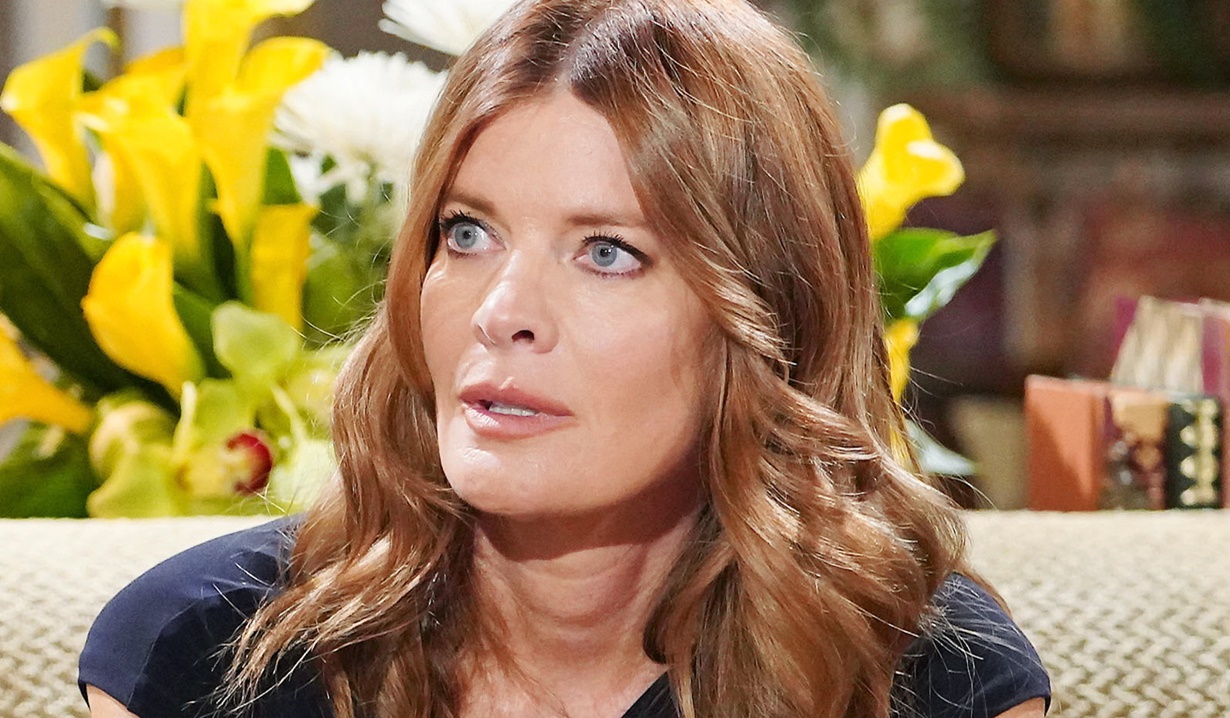 At the Abbott mansion, Jack finishes his drink, turns out the light, and picks up one of Harrison’s toy soldiers to look at it thoughtfully. He pulls out his phone and sends a text.

Phyllis encounters Adam in the hotel lobby and asks where his she-devil is tonight. She knew the new, improved version of him wouldn’t last and complains that Sally would have left town if he hadn’t hired her. Adam points out Summer seems to be doing fine, and says he still believes that Phyllis sees a little of herself in Sally. Phyllis won’t dignify that with a response. Adam thinks he hit a nerve. 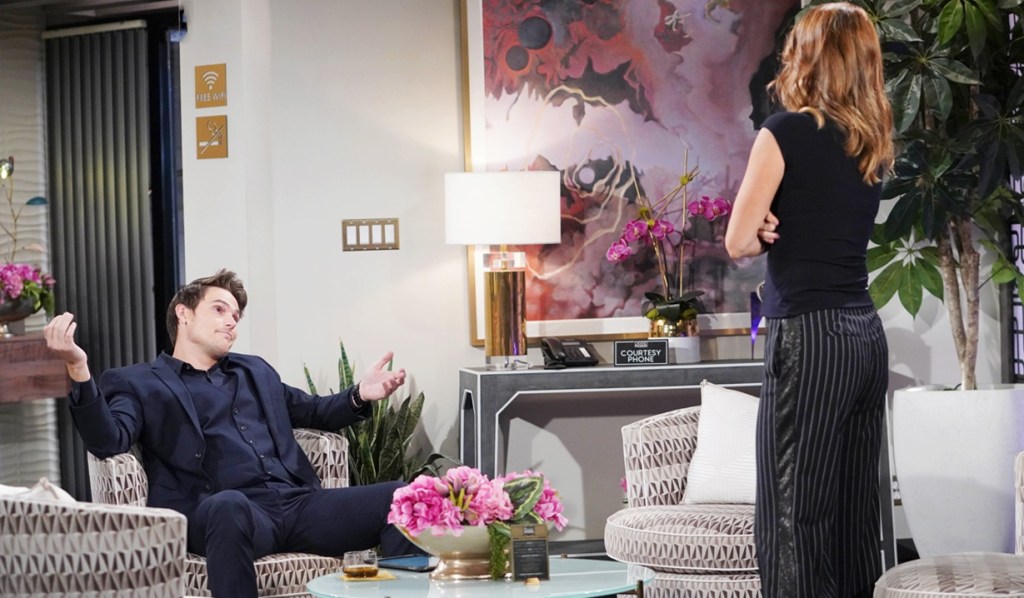 At Crimson Lights, Nick asks Sharon for his usual and talk turns from Summer and Kyle to Mariah. Sharon says her ordeal has affected her but she has a great support system. Nick considers himself part of that. They discuss Nick working with Adam. Sharon thinks it’s a testament to the kind of man Nick is. The conversation next turns to the Newman Media event and Sharon is tickled to hear that Phyllis got into it with Sally. Nick relays the details of the ice bucket incident as she exclaims in delight. Nick concludes that Jack got Phyllis out of the way and Adam took Sally to clean up. Sharon reacts visibly to the mention of Adam and Sally and Nick notices. He knows that when it comes to Sharon extricating herself from Adam’s life it’s never simple. 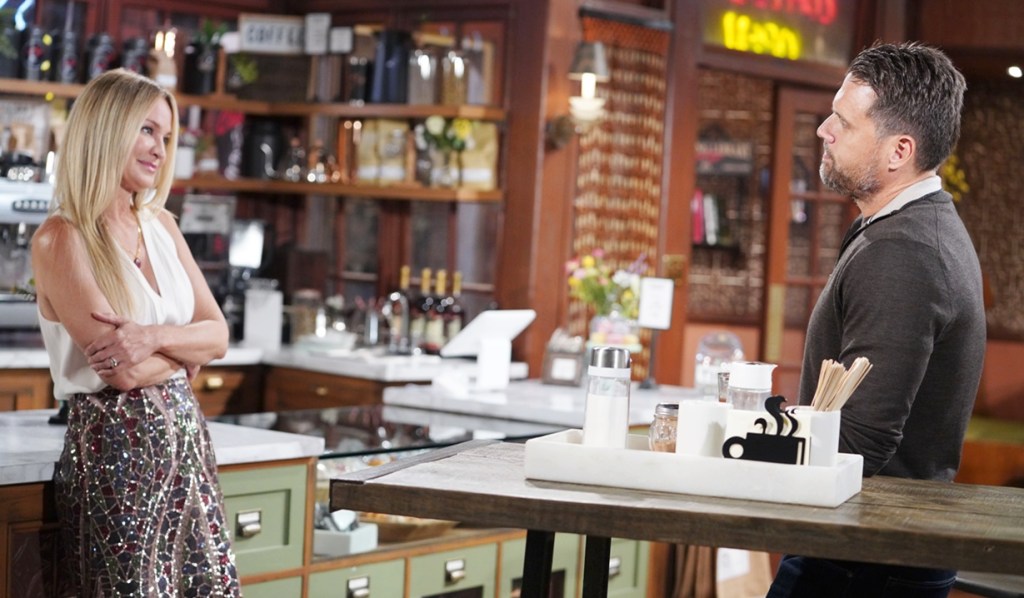 Sharon insists she’s committed to her marriage. Nick believes her, but thinks it must be tempting to let Adam back in — he allowed him into his life — so he gets that it’s not simple for her, but he also knows Adam’s a source of tension in her marriage. Sharon sighs, “I wouldn’t be able to admit this to anyone but you.” She thinks everyone needs someone in their life that really supports them — and she’s made herself that for Adam. It’s very difficult for her to turn her back on him completely. Nick asks if Rey understands that she can’t cut him out of her life. Sharon shrugs that it can’t be smooth sailing all the time. She’s surprised to hear that has been with him and Phyllis. 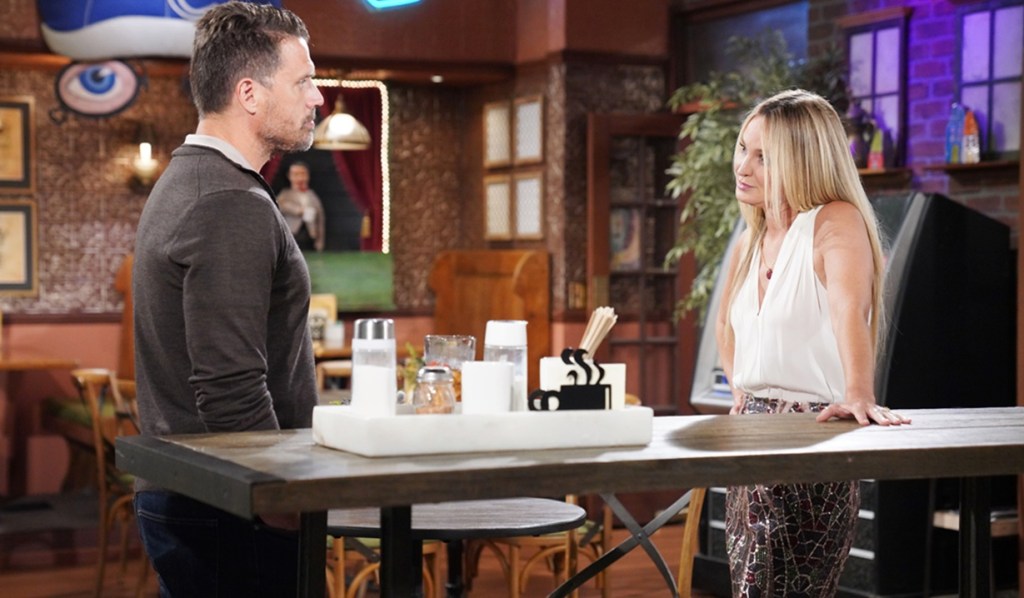 Nick explains he made a choice to accept Phyllis for who she is. Sharon thinks that sometimes things are better when a couple breaks up and gets back together. Nick apologizes for the times he hurt Sharon and muses that maybe he and Phyllis are just older and wiser now — so it doesn’t have to be complicated. Sharon understands why he’d choose something easy. Nick wonders if she’s suggesting he’s settling. Sharon denies it. Nick tells her, “Don’t take this the wrong way, but could I say the same thing about your relationship with Rey?” Sharon chatters that she and Rey get along and all that matters is that you’re happy. Nick agrees to help her close up. Sharon pauses on the patio and looks thoughtful. Nick turns off the lights and looks in her direction, also pensive.

Jack answers his door to Phyllis, who thought he would be alone and might want some company. She asks about the text he sent. Jack found a toy Harrison left behind and got a little too nostalgic. Phyllis urges him to tell her what’s really going on. Jack sighs. He’s had countless conversations about Kyle and Harrison moving away and he keeps saying he’s fine, but the truth is, it’s been jarring. He keeps telling himself he has to move on, and then gets angry that he can’t. Becoming emotional, he muses, “This house used to be filled with noise and love… and now it’s not.” Jack doesn’t want to get used to the silence and the emptiness of it all. Phyllis is hearing that he’s lonely. Jack replies, “You have no idea.” 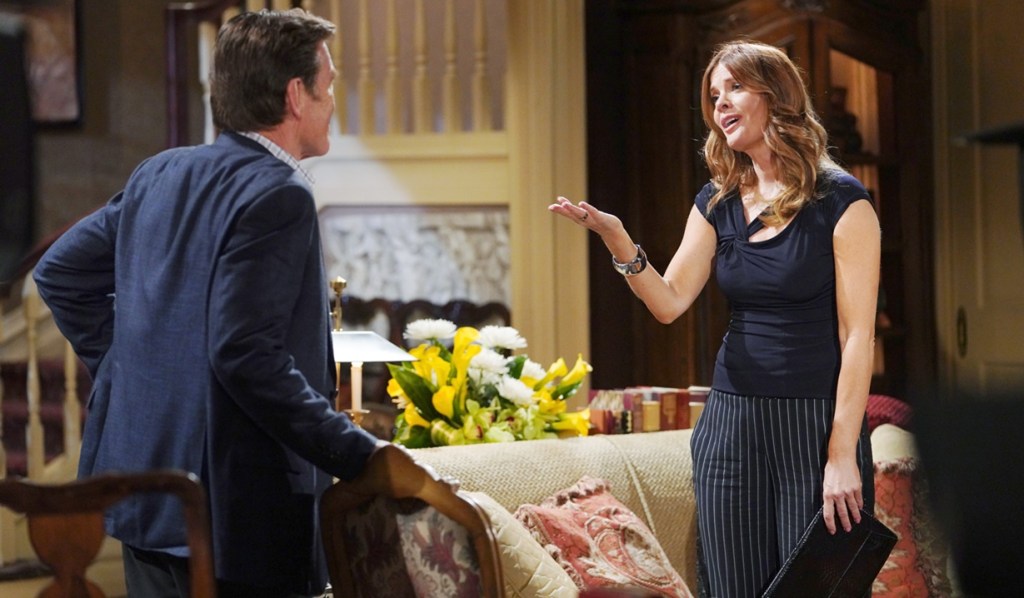 Jack confides that being lonely is embarrassing; it’s like he failed at life. Phyllis assures him he’s not alone and a lot of people love him; herself included. She knows that doesn’t preclude one from feeling lonely and philosophizes, “We’re born alone, we die alone.” Jack snickers, “Is this supposed to be a pep talk?” Talk turns to him trying to connect with Sally. Phyllis can’t understand who Jack was hoping she’d turn out to be. Jack replies, “Do you want an honest answer? I guess I was hoping she’d turn into you.” Phyllis laughs that Sally couldn’t be her; not on her best day, and then teases, “You don’t want another me. There’s a reason our marriage didn’t work out.” Jack knows all that, but feels their marriage had some of the best times of his life. He goes on about her being beautiful and a spectacular package. 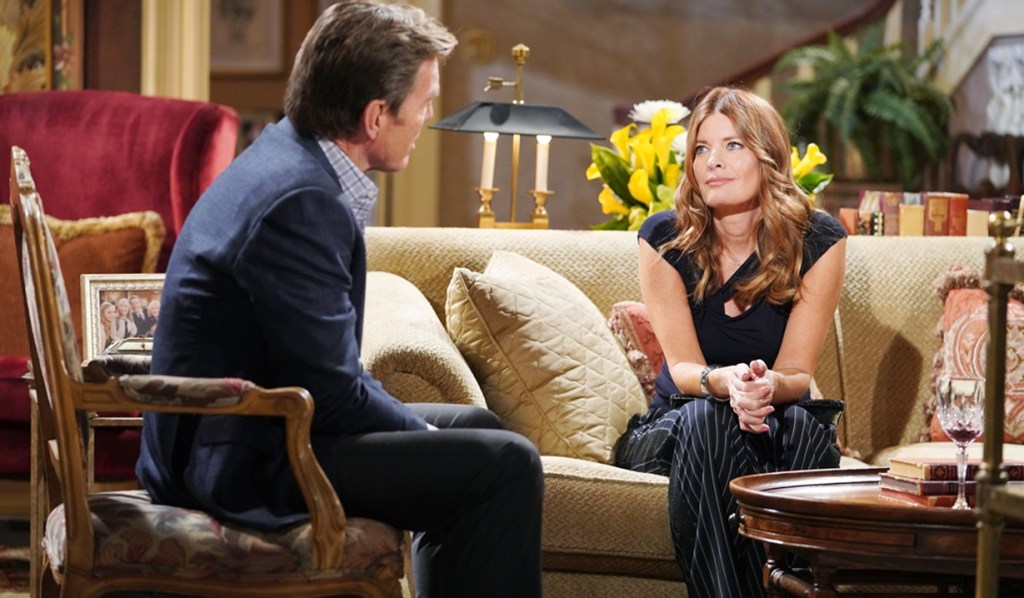 Phyllis warns Jack he’s had too much to drink, but Jack continues that maybe he didn’t move on with his romantic life because she set the bar too high. “It’s true. I have never stopped loving you, and I don’t think I ever will.” Phyllis gawps. Jack knows their time is over and she’s happy with… Phyllis interjects, “With Nick. That’s a fact.” Jack says, “Here’s another fact: I still love you. Truly, deeply. I have to live with that. It won’t stop; it won’t go away.” Phyllis goes to get Jack some water and returns to find him asleep. She covers him with a blanket and leaves. 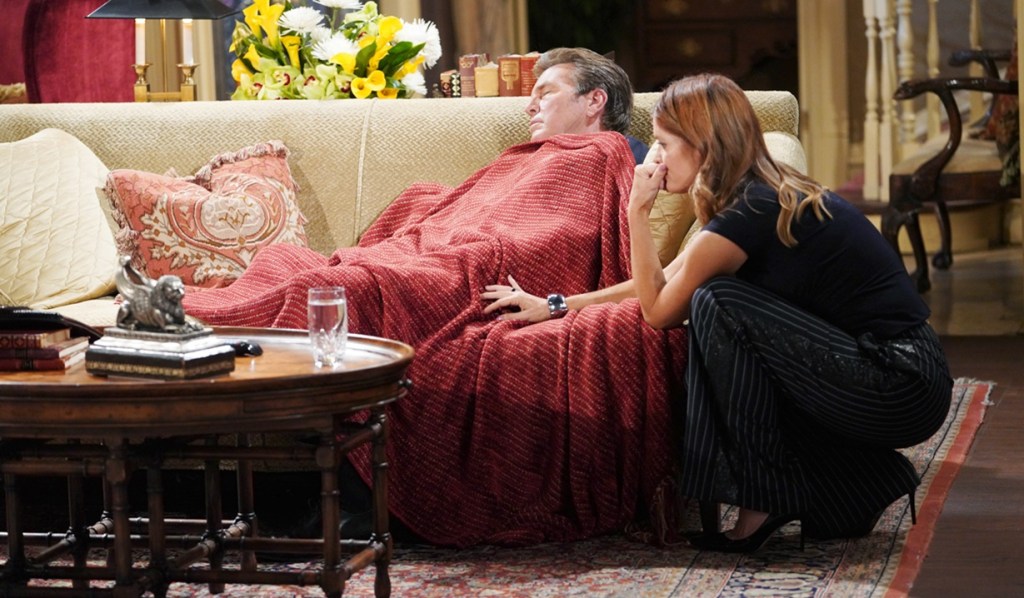 At the ranch, Sally has been summoned by Victor. She guesses he called her over to talk about the scene she made at the launch. She informs him it wasn’t covered in the press, so there was no negative ramifications for the company, and Adam wasn’t mad. Victor smiles. He wants to get to know her better and offers her a scotch before bringing up the job at JCV that his granddaughter held before her. Sally sighs… so this is about Summer. Victor muses that she caused Summer distress and that upsets him — had he known earlier, things would have turned out differently. Victor brings up Connor and warns that what she considers harmless flirtation with Adam could have consequences. Sally understands, but questions if he should be dictating his adult son’s personal life… or hers for that matter. 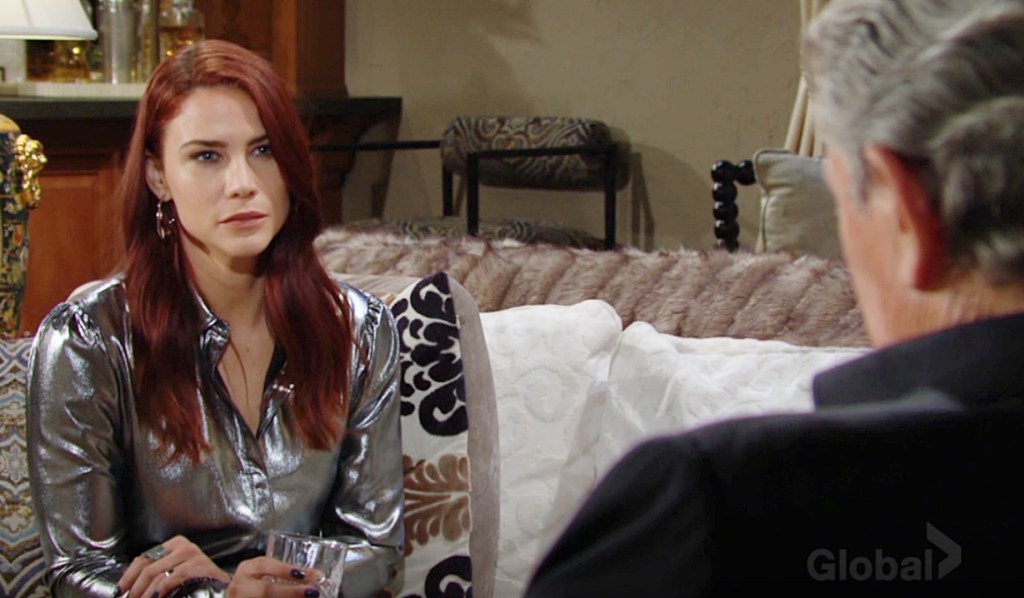 Victor advises Sally not to use his son Adam as a way to salvage her lackluster career and warns that to argue with him would be her worst mistake yet. Adam appears. “I guess I missed the memo about this meeting.” He wants to know why his father would talk to Sally about Connor. Sally interjects that Victor clearly doesn’t trust Adam to communicate the information himself. Victor dismisses Sally and Adam agrees that she should go. 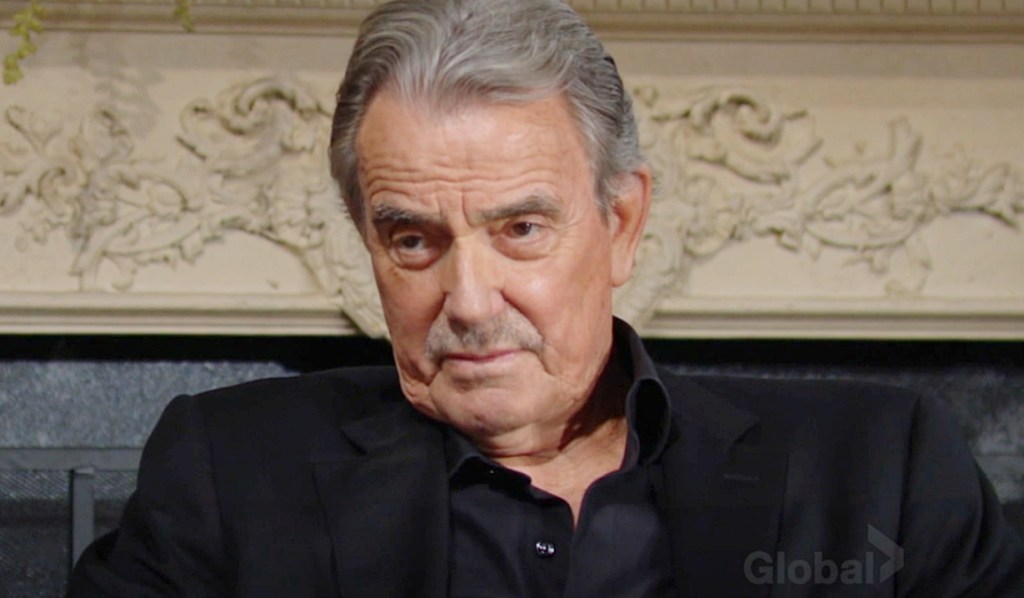 Once alone, Adam asks his dad why he would dump all of that on her. Victor knows her type; “She’s a social climber who is cozying up to you at the risk of pissing me off, and hopes to come out on top.” What he doesn’t know is what Adam’s motivation is. They bicker over whether Sally’s using Adam or not, and Victor complains about his son gallivanting with that dame all over town and without considering the consequences. Adam will always think about Connor and doesn’t need his dad going behind his back to micro-manage him or control him as he has in the past. He walks out. 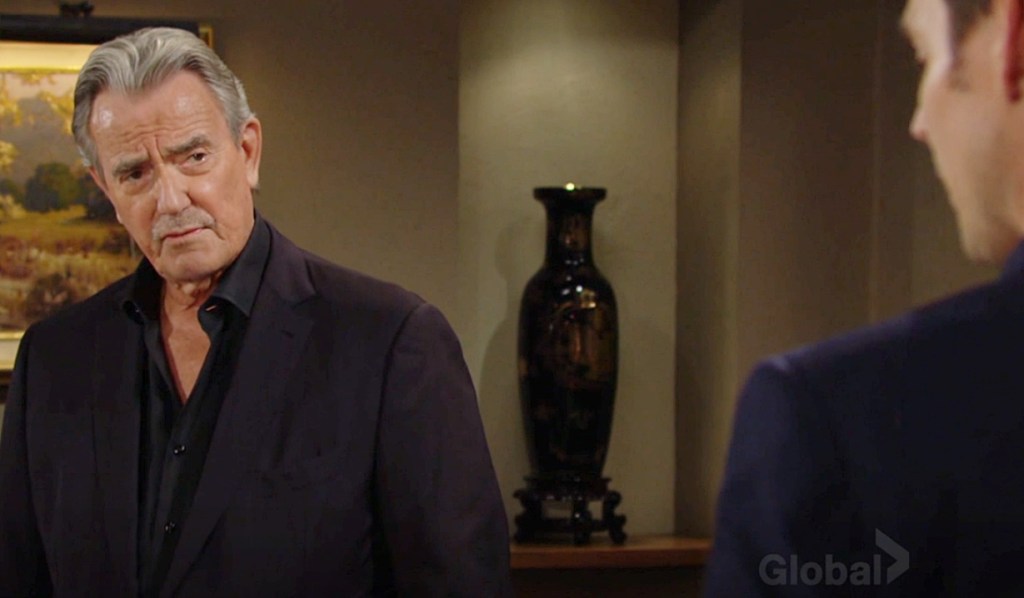 Sally strides into Society and orders a scotch before advising the bartender that she’s become the target of the Newmans. She explains Victor wants her to stop seeing his son, not that they’re dating. She raises her glass. “To my boss’ father. Jerk.” Later, just as she muses, “Well, Adam, your loss. It could have been fun,” and turns to leave, Adam appears. “My father made my point and now I want to make mine.” He kisses her and they head to a hotel suite to make love… except it’s all in Sally’s imagination. 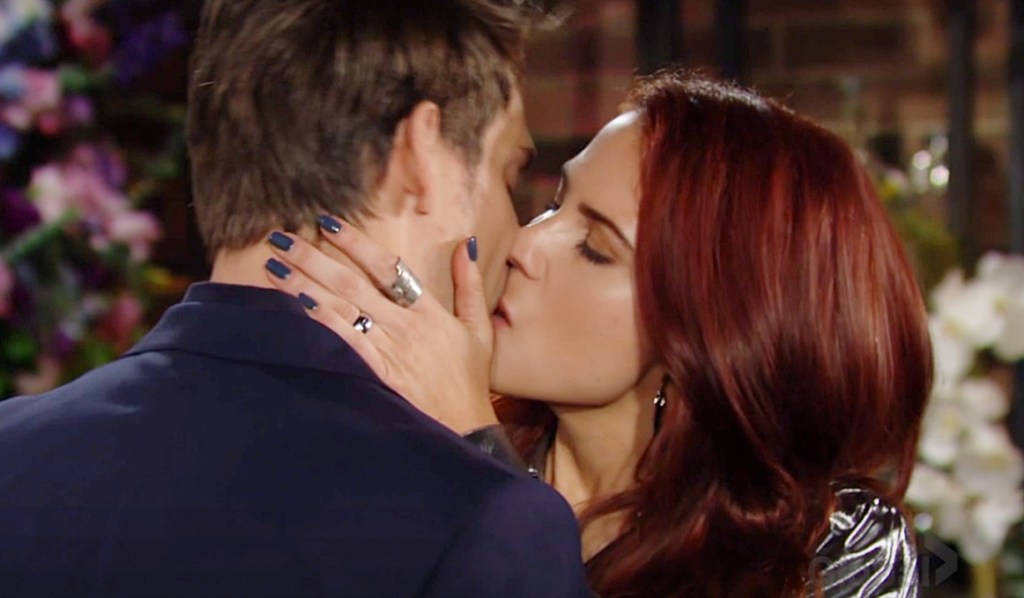 Adam snaps Sally out of her reverie when he actually appears by the bar and says her name. She asks why he’s there. He apologizes for his father and all the things he said. “He was totally out of line.” She’s glad he feels that way. Adam admits that his father, did, however, get him to re-evaluate the situation. “I don’t think we should see each other outside of the office anymore.” Sally muses that you either decide to do something or you don’t. “If people don’t like it, to hell with them.” She walks out and Adam can’t help but smile. 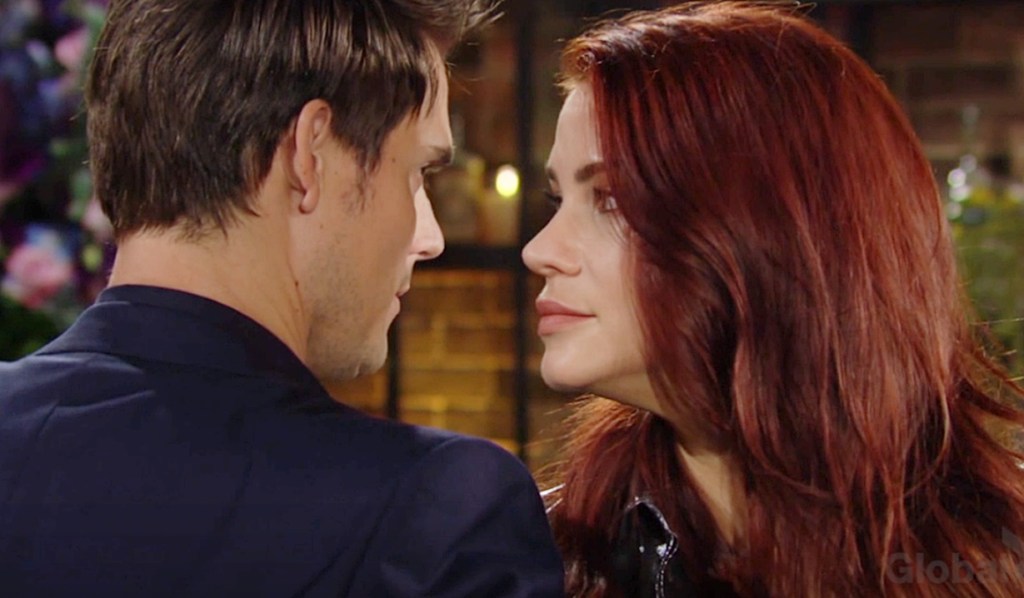 At the hotel, Nick joins Phyllis in the suite and looks thoughtfully at her as she sleeps. Facing away from him, she opens her eyes.

At home, Jack awakens and rubs his eyes and forehead as he recollects what happened before he fell asleep.

Sharon flips the closed sign on the coffee house while looking deep in thought.

Next on The Young and the Restless: Sharon questions Adam about Chelsea.

If you missed it last week, pop in and leaf through our fun photos of Young & Restless’ most intense rivalries below. Get your free daily soap-opera fix for The Young and the Restless — and all of the other daytime dramas — delivered straight to your email inbox by signing up for Soaps.com’s newsletter. 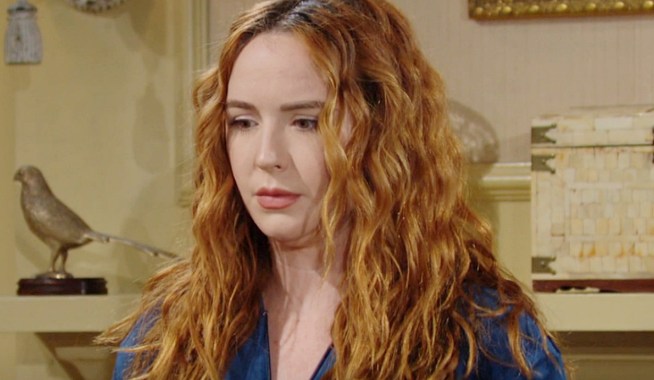 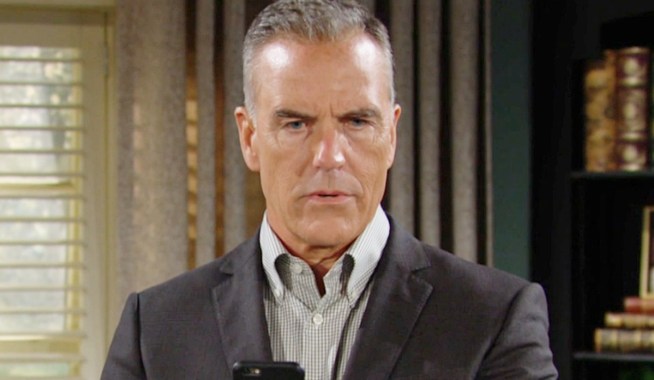