Tuesday, August 31, 2021: Today on The Young and the Restless, Elena is left speechless, Victoria pays Lily a visit, and Ashland requires help to get home. 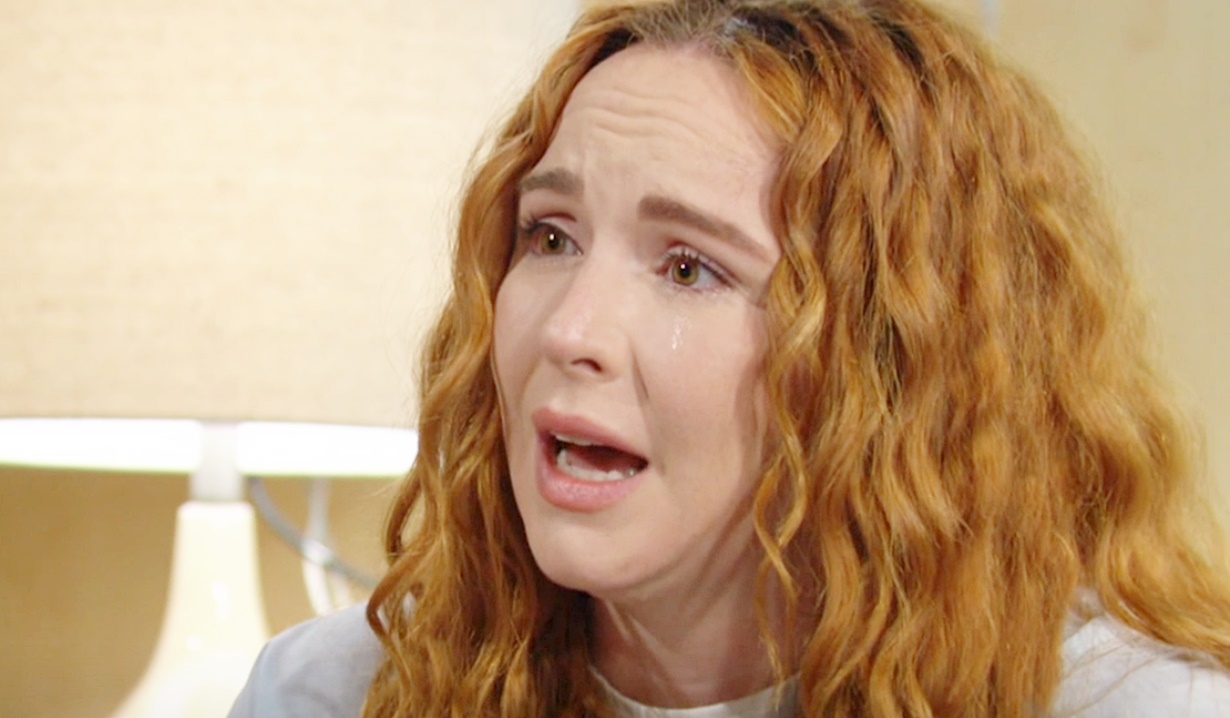 At the penthouse, Devon recaps Mariah giving birth for Amanda, who calls him a hero. He doesn’t want her to refer to him as the father, however; that’s Chance. Amanda questions if it can be that cut and dry — he has a biological connection, helped deliver him, and she knows he feels something for the baby. Devon doesn’t deny it. “I’ve never felt this before. It’s not about me, though.” Amanda admires the risk he took in accusing Stitch. She’s proud of him.

In the hospital, Mariah awakens suddenly from a nightmare and screams at Abby, “Where is the baby?!” Abby assures her he’s fine; he’s in the nursery. Mariah finally relaxes knowing he’s safe and protected. Abby’s sorry she’s having these nightmares. Mariah agonizes about being locked in the room like solitary confinement. “I was alone except for Bowie. It was just he two of us and we were determined to get through it. I just don’t understand why…” Abby says it was all her fault. She was the one who opened the door to Ben and should have sensed something was wrong. Abby explains that Stitch’s life had hit a low point and this was his plan to get her to feel gratitude. Mariah declares that it wasn’t her fault; what he did to all of them was despicable. 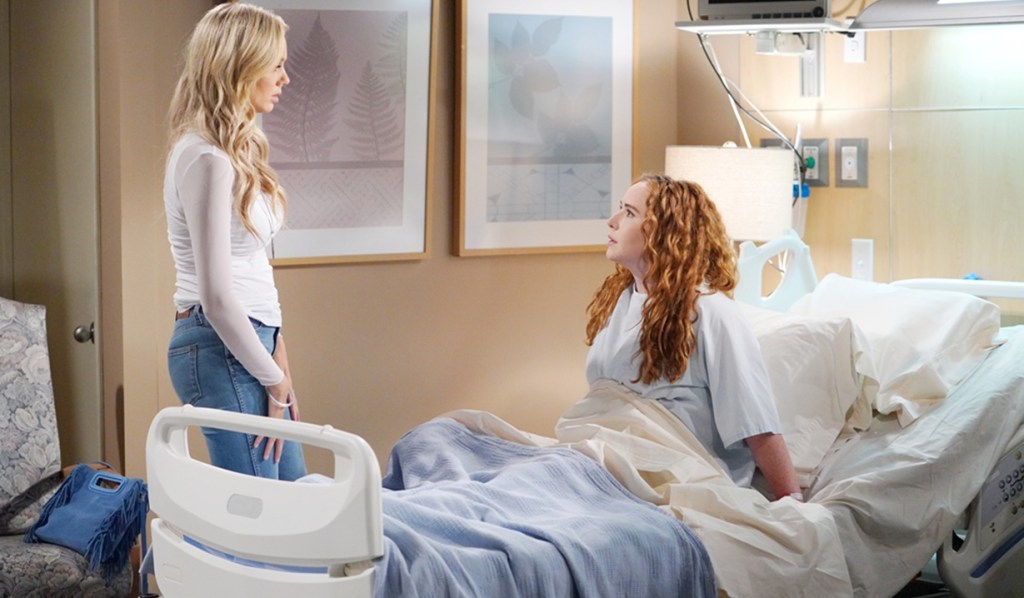 At Society, Nick and Victor can’t wrap their heads around Stitch snapping and kidnapping Mariah. Victor’s thankful it’s all behind Abby now and she can raise her boy. Victor steps away for a call and Billy walks in. He congratulates Nick on being a new uncle and he returns the sentiment. Nick snarls that Stitch better hope he never gets his hands on him. Billy’s glad he’s protective of Abby, but right now it’s his sister that needs help. Nick reminds Billy he needs to stay out of Victoria and Ashland’s personal life. Billy thinks he has good reason and explains that Ashland got his start by acquiring two news stations when his wealthy benefactor passed away. He questions where a twenty year-old got the money to buy the stations. Billy realizes that Nick already knew and figures Nick and Victor ran a background check as well. Nick would need good reason to get involved. “If you come up with one, let me know.” 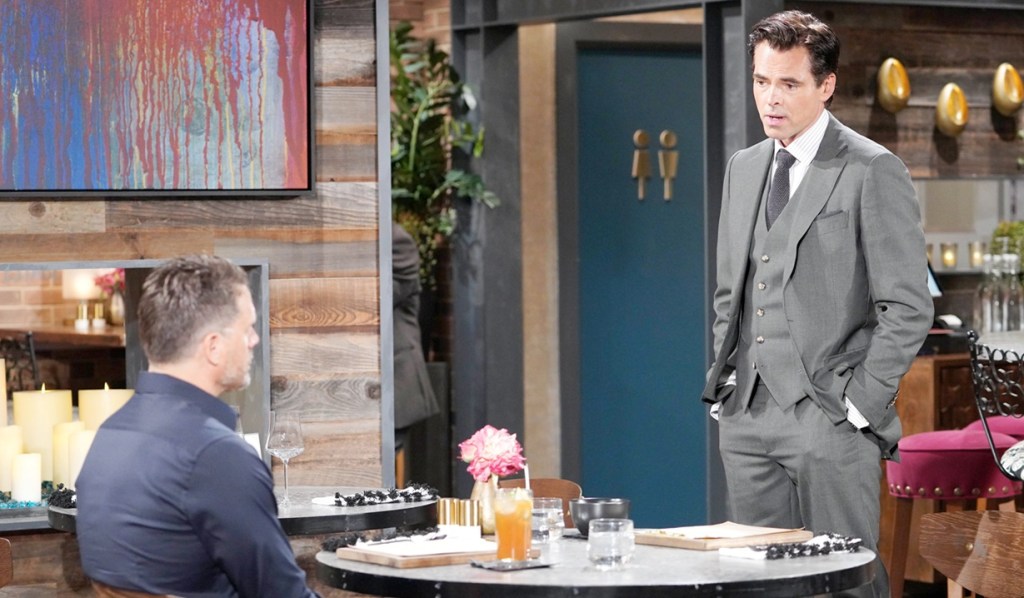 At Chance Comm, Lily informs Victoria that Billy’s out. Victoria has something to ask Lily. She explains that Ashland’s colleagues are getting calls from reporters and she figures they’re coming from Chance Comm. She’s surprised Lily is willing to stand by while Billy uses the company for his own agenda. Lily explains that they run the place as a partnership and if there’s news they go after it. Victoria doesn’t see the news in going after Ashland. “Why would you drag a sick and dying man through the mud.” She figures Billy’s saying he’s worried about the kids, but it’s about her and they both know that. Elena arrives and Victoria leaves. 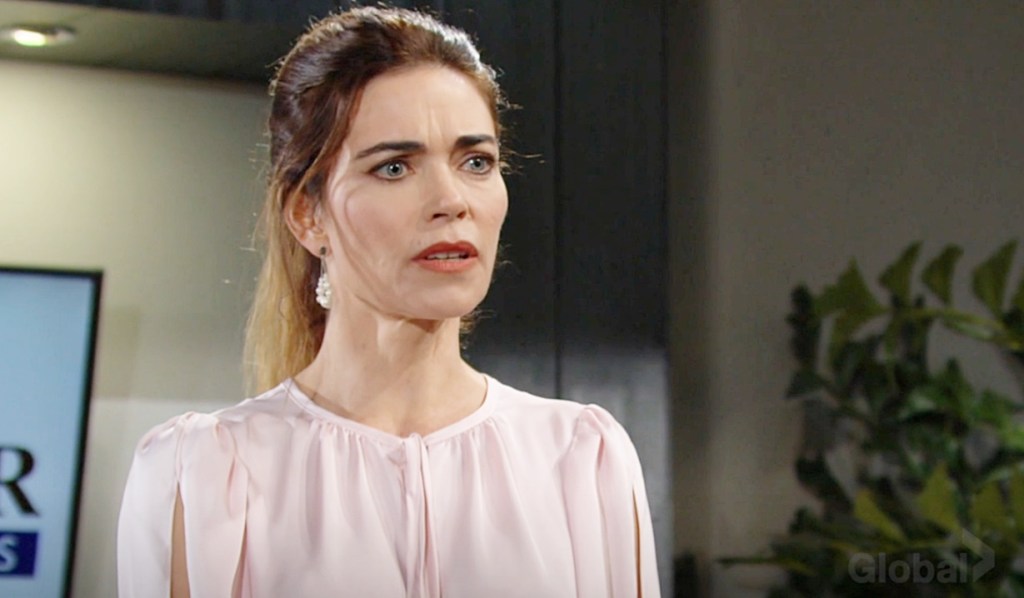 Elena asks if everything is okay. Lily reassures her. Elena wonders what she wanted to talk about. Lily thinks it’s good news and hopes she’ll agree. She explains that Nate’s promotion meant he had to give up his position at Ask MD Now. “I was wondering… how full is your plate these days?” Elena learns that Nate suggested her as his replacement and is speechless. Lily goes on about how perfect she’d be for the job. Elena just needs a minute. Lily tells her the job is hers if she wants it.

Nate walks into Crimson Lights as Ashland takes a weak spell. He makes sure he’s okay and wants to help. “Let me get you out of here.” Ashland nods.

At Victoria’s house, Ashland thanks Nate for getting him home, but insists he was just a little dizzy. Nate could tell he was in bad shape. Ashland asks for his discretion. Nate assures him he’s Victoria’s friend. He gives Locke some vitamin supplements that help during chemo. Ashland knows he’s the new Chief of Surgery — he must have more important things to do. Nate is off duty and knows Ashland wouldn’t want anyone to see him struggle. He warns chemo doesn’t care about appearances. Ashland is beginning to realize that. He talks about projecting invincibility and muses about how it can fade so fast. Nate shares that he injured his hand last year and suddenly couldn’t perform surgery. He learned to be honest with himself about his limitations and ask for help. He urges Ashland to be honest with himself — and his doctor and Victoria — about the effects of chemo. 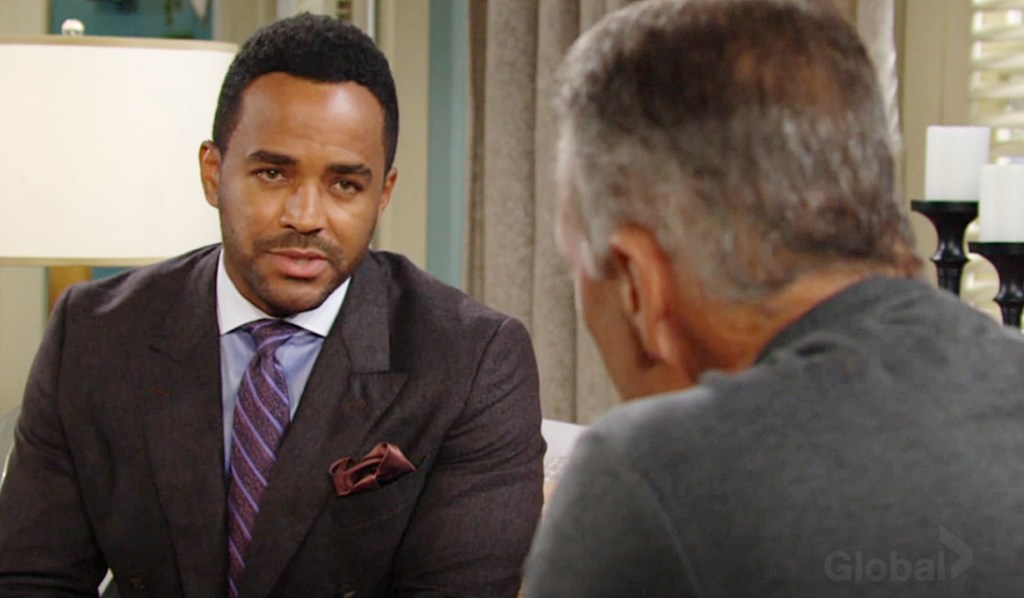 At the hospital, Abby updates Mariah that word has gotten out about the baby being born and everyone is anxious to see her. Mariah wants to see everyone too, but relays that she’s hungry; she’s had enough protein bars for a lifetime. Abby explains how the bars lead to them finding her. Mariah asks if they were worried when she first disappeared. Abby tells her that Stitch texted from her phone to say she needed time away. It was Tessa who first felt that something was off. Abby asks about the name, Bowie. Mariah needed something to call him during the ordeal; she wasn’t trying to name him. Abby says it makes sense that she needed to talk to him. Mariah was sure to tell him his mom already loved him so much.

Nate catches up with Elena at Crimson Lights. She teases him about quitting Ask MD Now and recommending her as his replacement — he didn’t say a word! Nate learns she hasn’t accepted yet, and hopes she’ll say yes; she’d be great at it. “You’d be a natural.” He invites her to practice on him. Elena asks what seems to be the problem. He has a pain; heavy, like dead weight. It’s in his heart… but as soon as he saw her it vanished. Her diagnosis is that he’s a charmer. 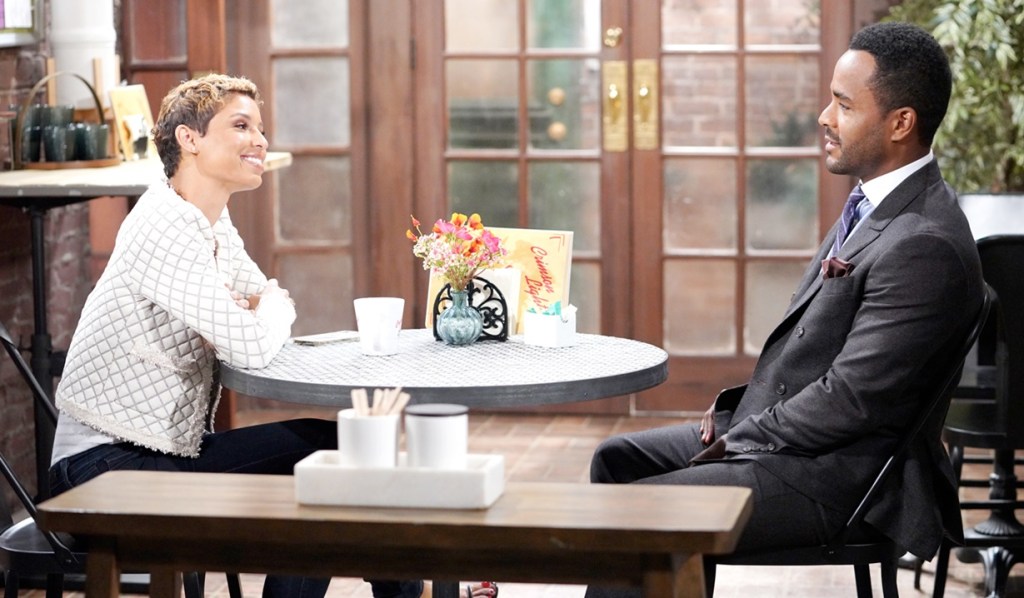 At the hospital, Abby and Mariah come from visiting the baby to see Rey and Sharon waiting in the room. Stitch showed up in Iowa and spirited Max away from the facility. “He’s on the run with his son, maybe looking for a fresh start somewhere.” There’s an APB out for them. Mariah fumes, “Is he going to get away with this?” Abby feels terrible. Mariah asks why she cares what happens to Stitch at all. Abby is angry, but it also makes her sad. Mariah has enough anger for them all and wants him behind bars where he belongs.

Later, Tessa visits Mariah and assures she’ll do everything she can to get her past this trauma. Abby appears with the application for the birth certificate. She’s about to fill in the baby’s name — it’s Dominic Phillip Abbott Newman Chancellor. She explains Dominic has a ‘D’ for Devon and an ‘M’ for Mariah. She runs off and Mariah tells Tessa that she called the baby ‘Bowie’ when she was in captivity. Tessa thinks Mariah can tell him that one day and it will be something they can connect over. Mariah tears up. She made him so many promises. “I was with him morning, noon, and night. I had to protect him. He was my reason for living and now… I don’t know how to let go.” Tessa embraces her. She assures her she and Dominic are safe; and she’ll be a part of his life. Mariah thanks her; she always knows what she needs. 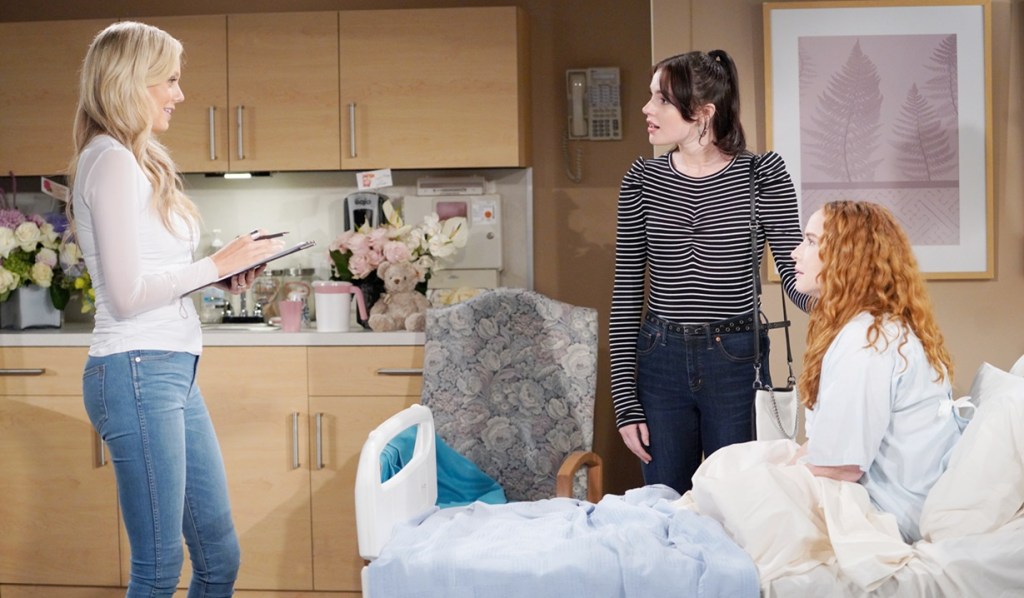 At the Chancellor Estate, Abby tells Devon that the baby is named Dominic and explains how it came about. Devon is beyond honored and is gratified that he’ll be home soon. They embrace.

At Society, Victor muses about how Ashland got the money to buy the news stations. He thinks it will be worth probing if they find something serious. Nick muses that Victoria may never have to know they were digging — Billy’s on the same track. Victor wonders if he knows they’re investigating. Nick relays he remained non-committal. Victor advises him to keep his distance from Billy Boy. Nick doesn’t think he’s doing it for leverage. Victor doesn’t care, in this case they’re circling the wagons — that’s the Newman creed. 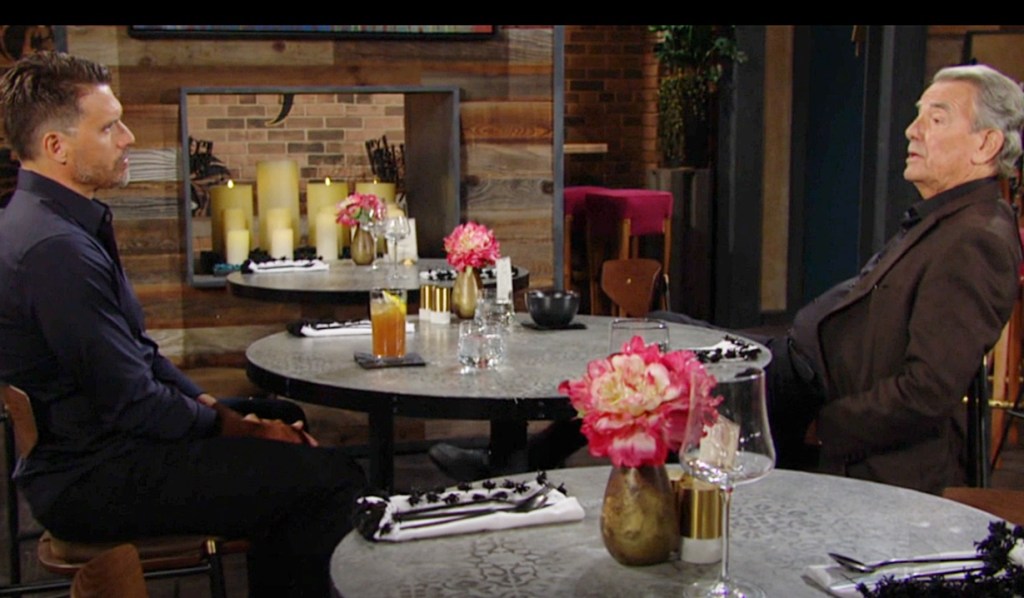 At Chance Comm, Lily updates Billy that her ex came by to tell her she’s a sell-out who lets him do what he wants around there. She worries that in his quest to get the goods on Locke he might be doing irreparable harm to the relationship with the mother of his children.

More: Is a Skyle wedding in the works?

Victoria arrives at home and Ashland lets her believe he made his own way home. He then sighs and admits he was lying. The treatment was brutal and Dr. Hastings brought him home. “For the first time, I have to admit I may not be able to handle this.”

Next on The Young and the Restless: Nick is forced to defend himself to Victoria.

Don’t miss photos of Tessa and Mariah’s love story below. Get your free daily soap-opera fix for The Young and the Restless — and all of the other daytime dramas — delivered straight to your email inbox by signing up for Soaps.com’s newsletter.

Phyllis Tracks Down Sally to Deliver...

Adam and Sally Cause a Stir as They...