Tuesday, August 24, 2021: Today on The Young and the Restless, Jack falls for Traci's new book, Billy turns up a nugget on Ashland's past, and Nate makes an interesting suggestion. 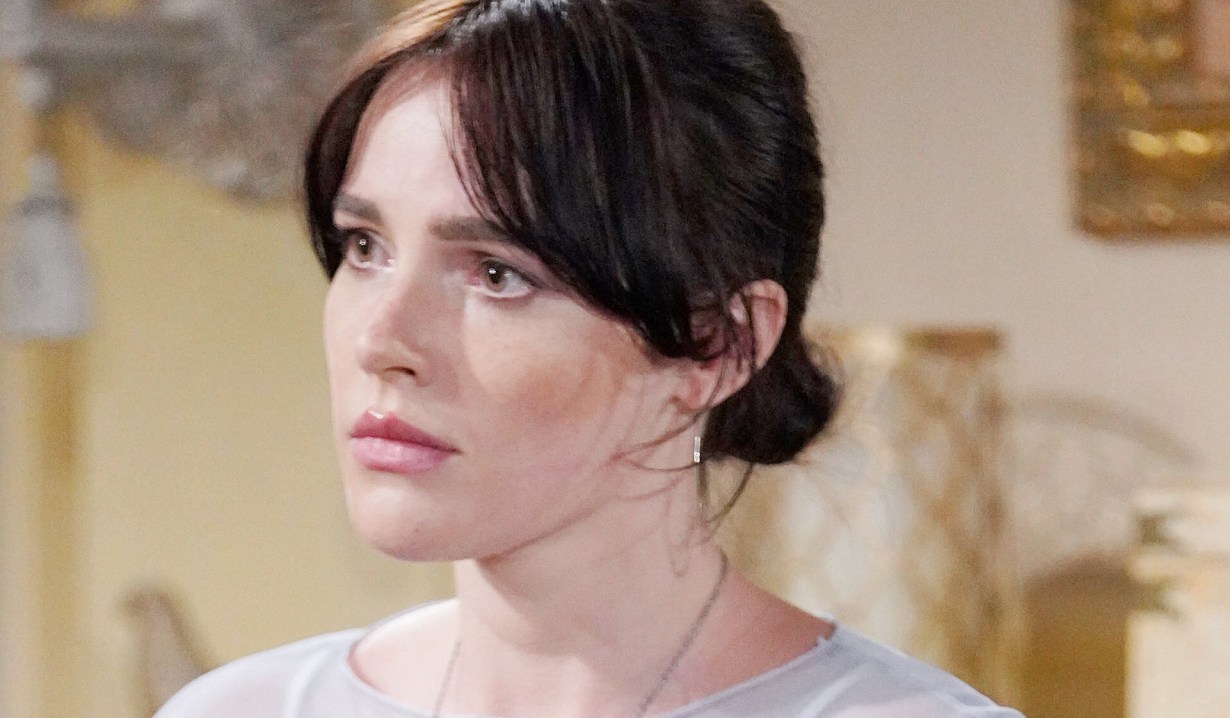 At Crimson Lights, Faith admits she’s excited about going back to school, and believes she can handle any bullies now. Sharon’s encouraged. Rey enters as Faith asks if she’s seen Mariah lately, who barely responds to her texts. Sharon covers and then tells Rey she’s not sure how much longer she can keep this up.

Stitch arrives at the Chancellor mansion, where Abby updates him that Victor and Rey have no leads. She’s incredibly concerned about Mariah and the baby. Stitch urges her to stay positive as she wails about everyone hitting dead ends and worries that Mariah will feel she’s abandoned her. Stitch spots a pregnancy protein bar on the table. Abby says they’re Mariah’s favorites. Stitch has seen them before and believes he might have a lead. Abby calls Sharon and Rey to come over.

In the room, Mariah’s exercising and tells the baby she needs to stay in shape to make a run for it if the door opens. She grabs a pregnancy protein bar from a pile of them and eats it.

More: Will *this* lead to a Shadam reunion?

Nate drops by Devon’s looking to touch base with Moses. He’s a little disappointed he’s not going into medicine, but is glad he’s focused on something else with another great mentor to guide him. Devon appreciates the vote of confidence. They discuss inviting Sofia for a visit, but Moses appears and asks them not to — she’ll want to take him back to New York. He’s worried about her reaction to his change of career path. Devon offers to have a conversation with her on Moses’ behalf. Nate teases that they know he wants to stay there for all kinds of reasons — Faith Newman reasons. Moses agrees to follow up with his mother, and Nate takes off. 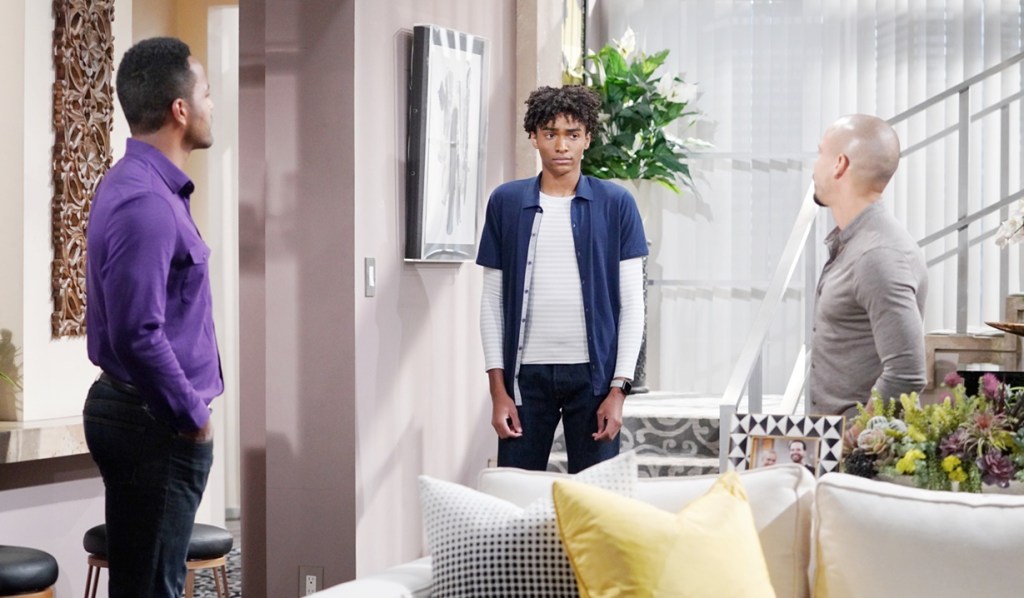 At the Abbott house, Jack updates Traci on Kyle, Summer and Harrison’s situation. He respects Ashland letting the kid go. Traci thinks Jack will miss the boy too. Talk turns to Traci’s new project which is a book about Dina’s early days in high-society Paris. Jack enthuses that it sounds like a good read and sits to read. He can only has time for about five pages. Traci watches as he starts… and keeps on reading. Later, she interrupts — he’ll have to put the book down to take her out for lunch. Jack tells her it’s magnificent and just the spirit lifter he needed. They embrace. 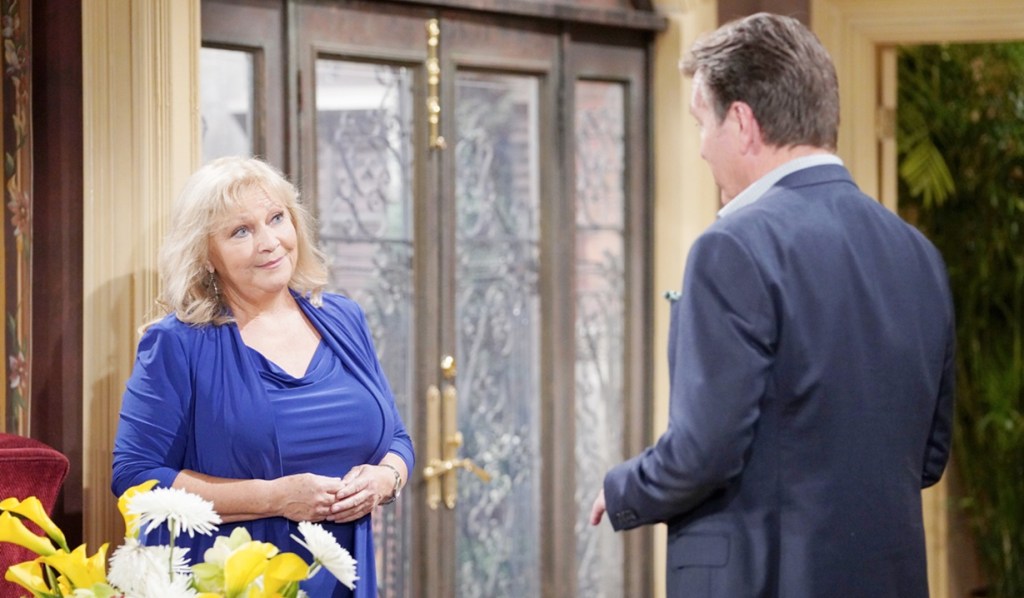 At Chance Comm, Billy insists he’s not trying to keep anything from Lily, who can see right through him, but she’s trying to find something on Ashland that’s a deal-breaker for Victoria. Lily reminds him that he told her he was supportive of her engagement. Billy feels if he finds something, Victoria will be forever in his debt. Lily smirks, “Dream on.” 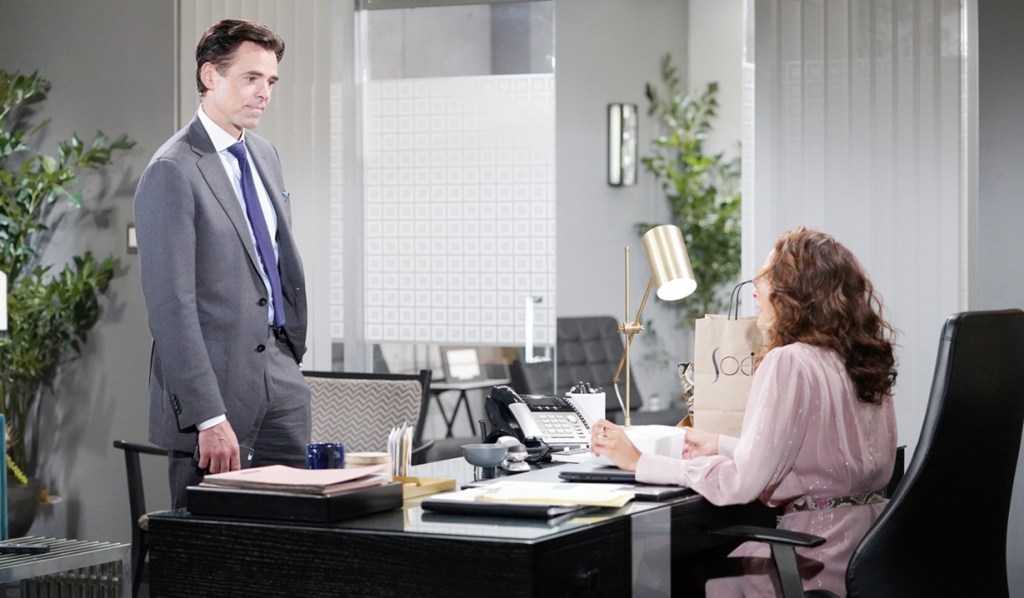 Amanda runs into Elena at the coffee house and asks if she’s okay. “You look exhausted.” Elena is exhausted, but also wired, and has to be back at work in less than eight hours. Amanda learns she’s been taking extra shifts. Amanda knows from Nate that the other surgeons love having her scrub in. She teases that Elena should start being horrible at her job… but they both know she can’t do that, so she should prepare to be permanently exhausted. Elena grins, “You sure know how to cheer a girl up.” Amanda wonders if someone at the hospital can lighten her workload. Elena assures her she’s fine.

At the park, Faith encounters Moses listening to music. Faith has a pop quiz for him, and asks what happened on Tuesday May 4. Moses recalls they were playing chess. Faith says he’s correct. Moses asks, “What’s this all about?” Faith doesn’t just kiss anyone — it has to be someone who cares enough to remember important things we shared together. “It will be a fun walk down memory lane.” Moses worries he’ll fail — will they be over? Faith teases, “No pressure, right?” After they’ve done the quiz off-screen, Faith comes to the last date — August 6th. Moses is stumped. Faith says it was the day he gave her the memento of the concert. Moses worries he’s failed, but says he likes her and doesn’t want to be just friends. Faith thinks he’s a keeper and feels the same way. Moses throws out the date of their first kiss — he bets her dad remembers it. He wants to plan a special date for them and Faith can’t wait. 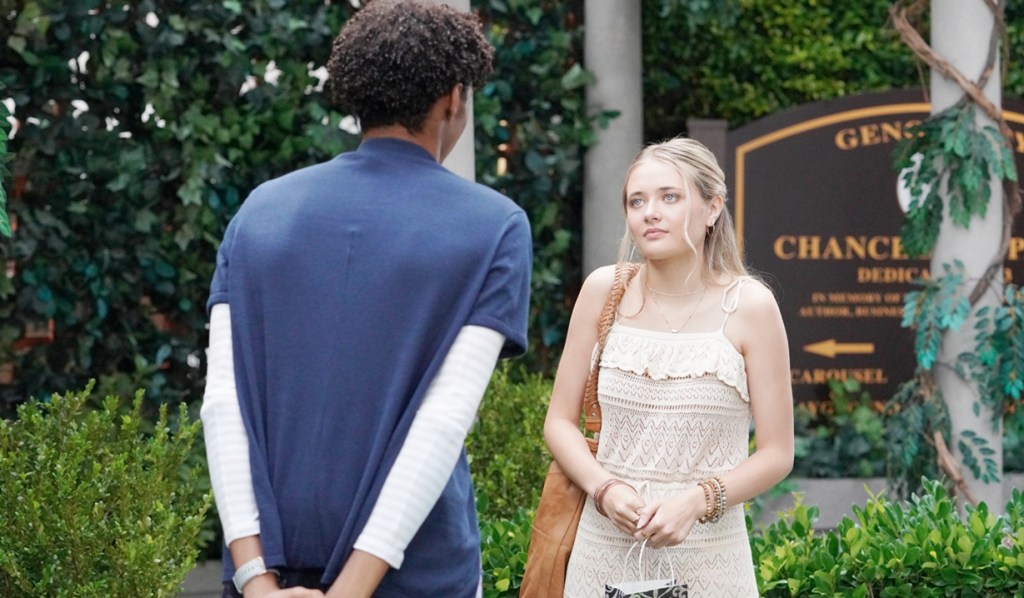 Nate joins Lily at Chance Comm and they talk the numbers on his show. Nate shares he’s been promoted to Chief of Surgery and informs her they’ll have to find a replacement. Lily’s so proud of him, even if she’s disappointed. He suggests she ask Elena to take over at Ask MD Now. Lily thinks it’s an interesting idea.

At Society, Jack gushes to Traci that she absolutely captured Dina’s spirit in her new book. Billy stops by the table, hears about the new novel, and can’t wait to read it. Traci goes to talk to someone and Jack learns Billy is doing a deep dive into Ashland’s background. Jack replies, “Oh good. That will end well.” Billy muses that Ashland’s a self-made man, the question is how did he make himself? Traci returns and Jack fills her in. Billy insists Ashland can handle whatever they throw at him. Jack’s more worried about Victoria. Billy feels that she might end up thanking him. Track and Jack exchange a look as he goes to get his takeout. 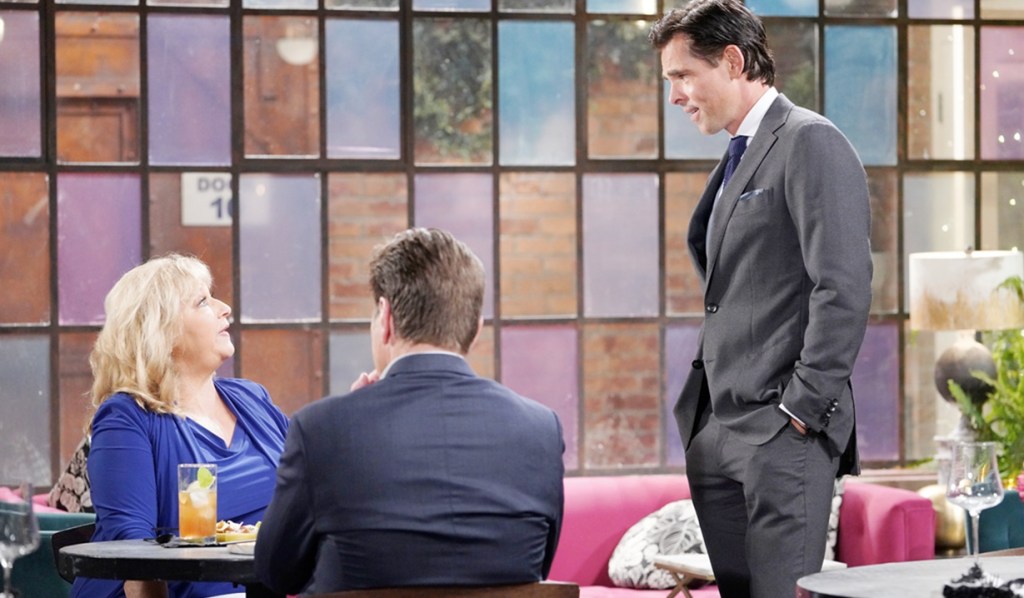 At the Chancellor Estate, Stitch tells Sharon and Rey that he saw a guy buying Mariah’s favorite pregnancy protein bars at a nearby convenience store. He was a much older man, who wouldn’t have been an expectant dad. He describes the man’s appearance for Rey, and Sharon asks if he thinks he was buying the protein bars for Mariah. Abby feels it’s certainly a possibility. Rey thinks the lead is a little thin. Tessa joins the conversation. Sharon asks if Stitch remembers anything else. Stitch recalls that the man had a shopping list — on notepaper with storks on it. Tessa asks, “Was it yellow?” Stitch confirms it was and Tessa explains that she gave one just like it to Mariah — she kept it in her purse.

Rey pushes Stitch for the details and hopes the store will have security footage. Abby tells Ben he’s a hero. Devon arrives and Abby tells him she was struggling to hold onto even a sliver of hope… but not anymore. They all listen as Rey gets on the phone to try and get security footage. Sharon thanks Stitch and Devon updates Abby that Christine is still trying to get through to Chance. Abby hopes he’ll be home soon and that their baby will be safe — it would be a dream come true. Stitch listens to Abby from across the room. 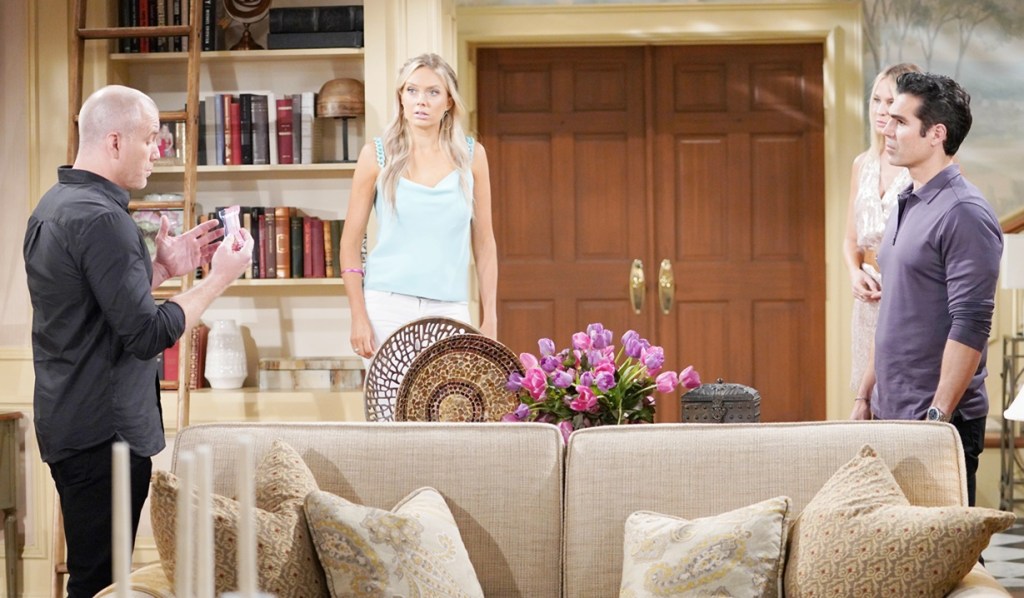 In the room Mariah decides to do some more exercises, but gets a pain. She gasps, “What was that?” and holds her baby bump. She tries to brush if off, but it comes again, and is more severe. She pants, “No, it’s too soon!”

More: Mariah’s kidnapping all ‘stitched’ up

Back at the Abbott house, Traci worries that Jack’s back in a funk. Was it Billy, or is he thinking about Harrison? Jack reassures her. “Just focus on finishing your fabulous new book.” When Jack walks away, Traci looks after him with concern.

At Chance Comm, Billy tells Lily that he’s learned Ashland Locke was involved with a wealthy older woman back in his days before Tara. Lily wonders if it’s worth reporting. Billy thinks there’s more to it — if there is, he’s going to find it.

Next on The Young and the Restless: Sally spies on Phyllis and Jack.

Look back on Tessa and Mariah’s love story in the gallery below. Get your free daily soap-opera fix for The Young and the Restless — and all of the other daytime dramas — delivered straight to your email inbox by signing up for Soaps.com’s newsletter.

Victoria Walks Out After Ashland’s...

Victoria Confronts Her Father About...

Busan and London Selection ‘Pedro’ Explores the Outsider in Society