Tuesday, August 10, 2021: Today on The Young and the Restless, Chloe connects with Sally, Jack butts heads with Ashland over Kyle, and Phyllis seeks out her friend. 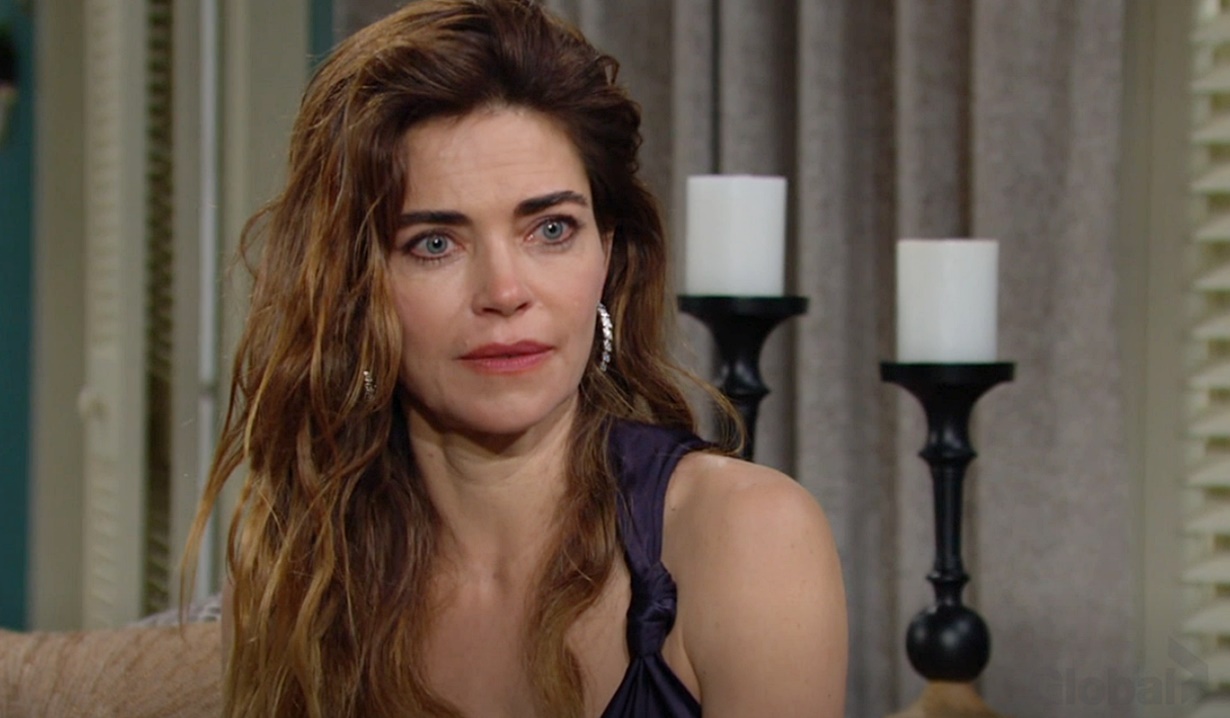 At the hotel, Phyllis is still upset about Summer staying in Milan. Nick recaps that Phyllis gave Summer and Kyle their lives back — it was an incredible gift — so that Summer can make her own decisions. Phyllis knows he’s right. She saw Sally get fired, and told Summer, but she still didn’t want to come back. Phyllis can’t imagine how Jack feels; it was his dream to run Jabot side-by-side with Kyle. Nick advises that she has to let them work it out. Phyllis becomes emotional; it’s just that Jack’s her friend and he’s had a terrible year — if Harrison goes off to Italy, he’ll be lost. 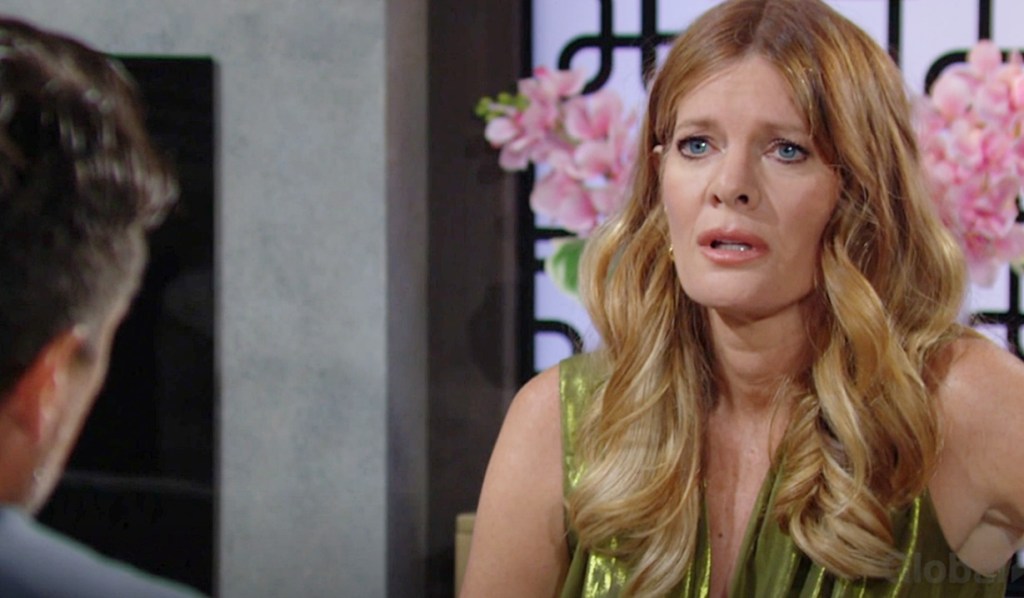 At the Abbott house, Jack tells Harrison he wants to squeeze in every possible minute with him that he can. He sends the boy to get his ball and mitt so they can go to the park.

At the ranch, Victoria and Ashland have just announced they’re engaged. Nikki tells Victoria she’s taken her breath away. Victor asks what the point of all this is. “Why now?” Ashland says it’s simple — they’re both making up for lost time. Victoria relays that Ashland is fighting his illness and starts treatment soon. Ash will do whatever it takes to get more time with their daughter. Victor stuns them all when he declares he’s glad the two of them found each other. He’s waited a long time for his Victoria to find a man worthy of her. 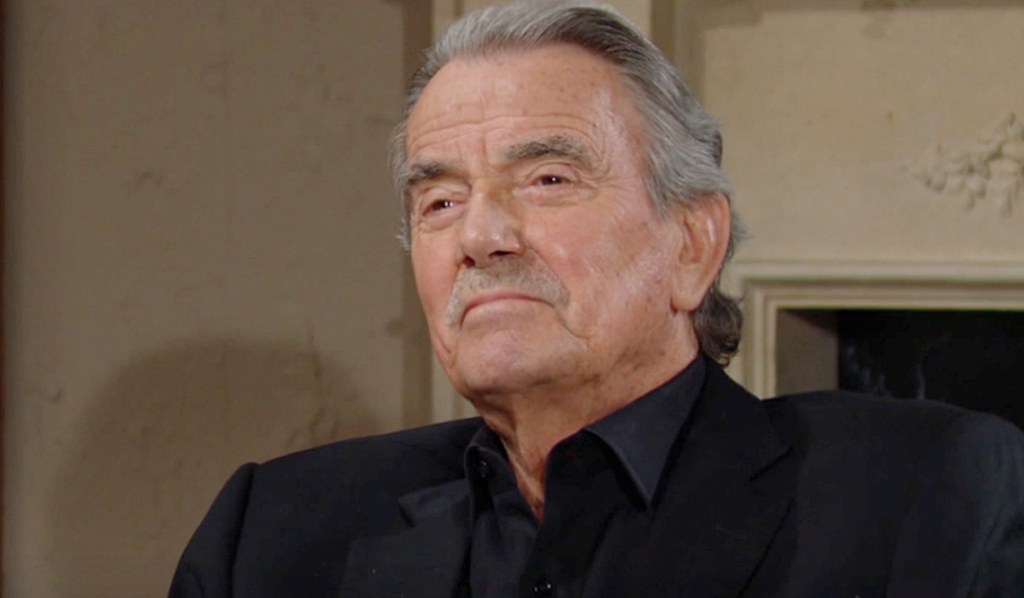 Later, Nick finds Nikki sitting alone at the chess board and updates her on Summer and Kyle staying in Milan. He explains that Phyllis saw all the signs where Tara and Sally were concerned and wouldn’t let it go. Nikki understands; it was mother’s instinct. She asks, “What about Harrison?” and Nick explains it will likely come down to whatever Kyle can negotiate with Ashland. Nikki muses that Victoria may have some influence there. She teases they have some big news… but she’ll let his sister tell him. Talk turns back to Phyllis being blindsided by Summer’s decision to stay in Italy — she’s heartbroken. Nikki thinks that’s natural. When Nick mentions they’d like grandchildren one day, Nikki needs a minute to picture her son as a grandfather. Nick feels Phyllis just needs time to adjust, after all, Daniel’s in Georgia and Noah’s overseas, and they got used to it. 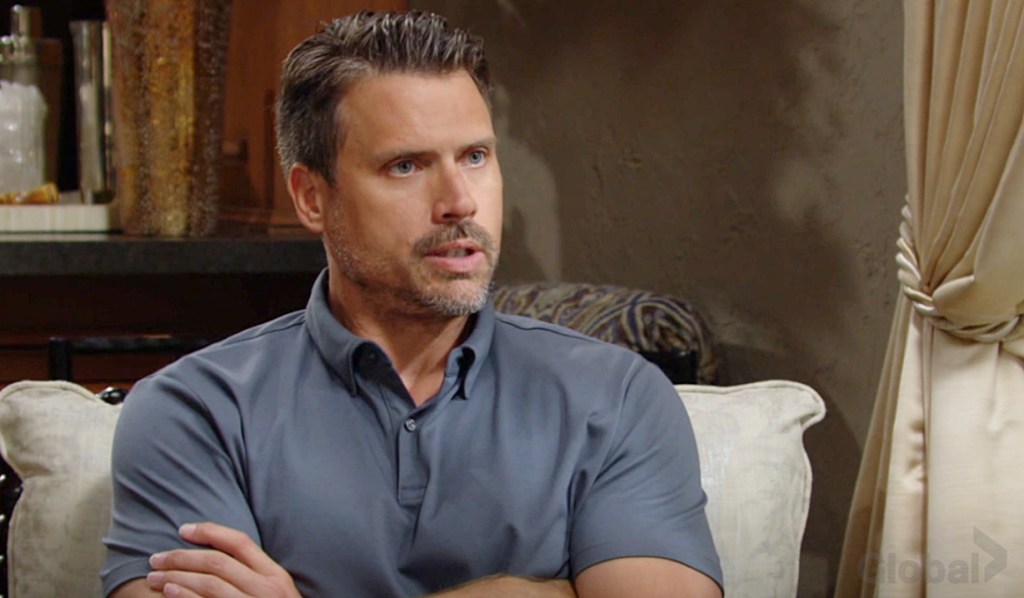 At home, Ashland tells Victoria he’s still basking in the glow of Victor’s compliments. Victoria smiles; it’s not her father’s typical reaction to the men she’s going to marry — Ash is far superior to her exes. Ashland thinks Victor sees that he’s in love and appreciates her for the amazing woman she is. He has his first treatment tomorrow morning and they agree they’re ready for anything side-effects wise. Ashland leaves to visit Harrison. 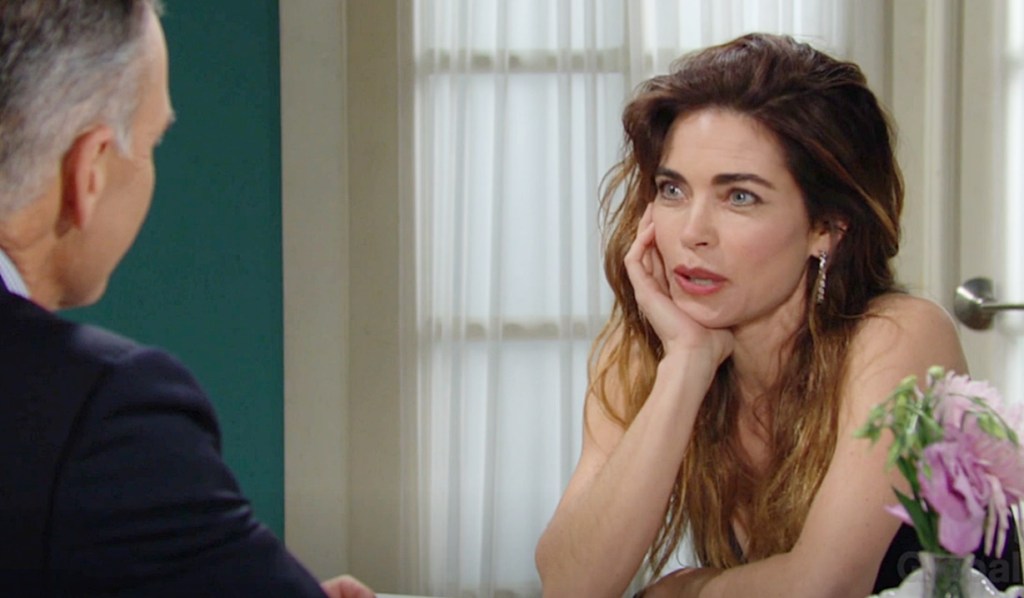 More: How Ashland could be playing Victoria

At Newman Media, Adam tells Victor that Ashland Locke is selling off his New York area real estate. He hopes Victoria knows what she’s gotten herself into. Victor hints that Ashland has something to live for now and may be around longer than they think. Adam suggests he might want to run Newman Enterprises if he lives longer. Victor doesn’t want him to worry about that — he’s putting the cart before the horse. Chloe interrupts the conversation to get Adam’s approval on her website. He reminds her she has free rein. Chloe insists he look at her mock up. Adam tells her it’s clever; he’s impressed. 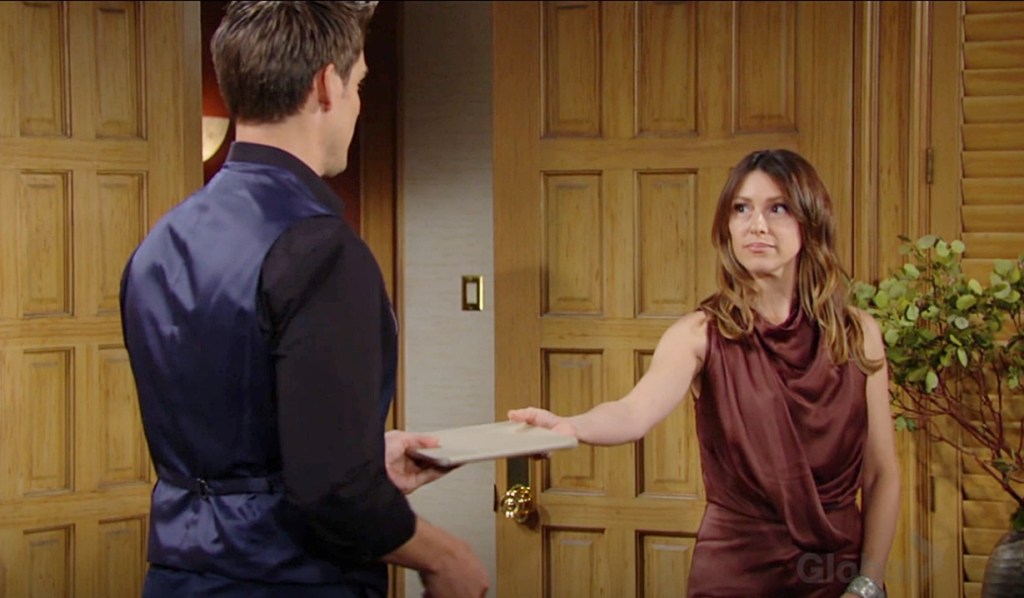 Chloe exits, and Victor warns Adam she can’t be trusted — for all they know she was in on Chelsea’s plot to frame him. “What is this ‘hands off’ relationship with her? She’s dangerous.” Adam’s unbothered and feels he’s keeping Chloe busy and out of trouble. His focus is on Newman Media and taking advantage of their competition’s weakness. He understands Newman Enterprises is off limits. Victor expects Adam and Nick to be supportive of Victoria.

More: Will Adam hook up with Chloe?

At the park, Jack passes Harrison his sippy cup and thanks him for spending part of the day with him. He lets the boy know that wherever he goes, his grandfather will remember him and come visit him as often as possible. They head home so Harrison’s father can visit. 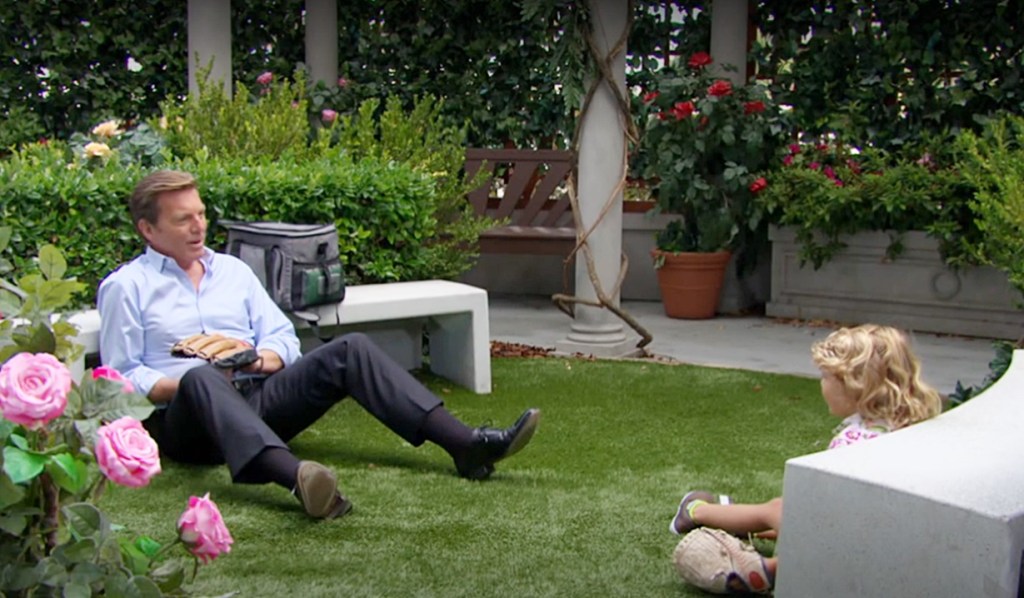 At Crimson Lights, Sally’s on the phone complaining about Phyllis to her Grams when the redhead comes through the door. She snarks, “Hey that’s a real long coffee break,” then grimaces, “Ooh, I forgot — you’re unemployed.” Sally hisses at her, “Stay away from me.” 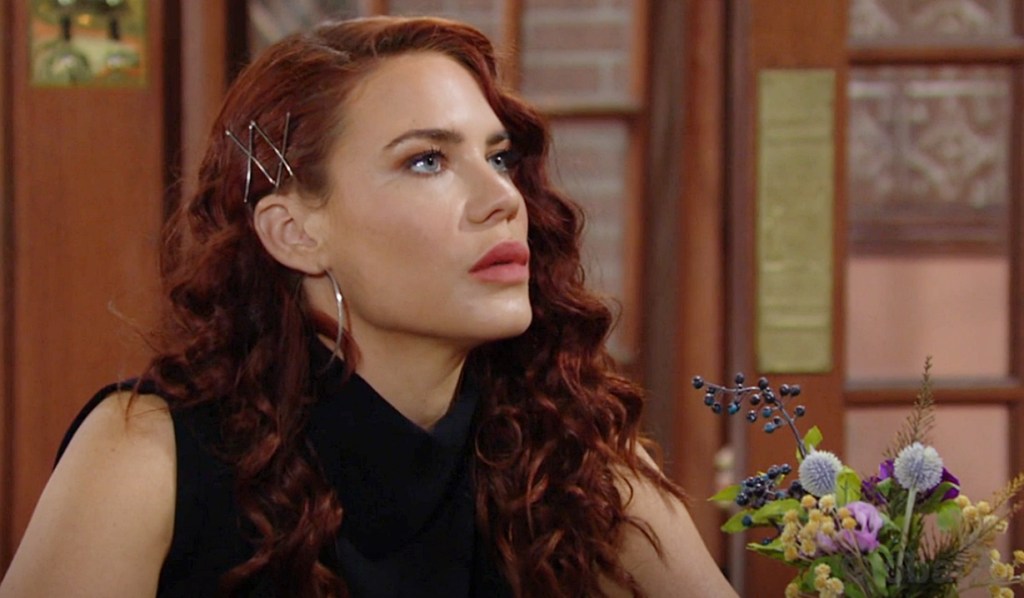 On the patio, Chloe tells Kevin that Adam is so calm and cooperative it’s unnerving. Kevin figures his wife is bait to lure Chelsea back under his control. Chloe muses that Chelsea doesn’t have many options right now. Suddenly, she spots Sally Spectra inside. Phyllis appears, and warns them not to get involved with that one. “If you don’t believe me, just ask Lauren.” Chloe shakes her head as Phyllis exits. Chloe fills Kevin in on Sally being a damn good fashion designer. She doesn’t know what Phyllis is talking about. Chloe wants to talk to Sally, but Kevin is concerned and asks her to be careful. 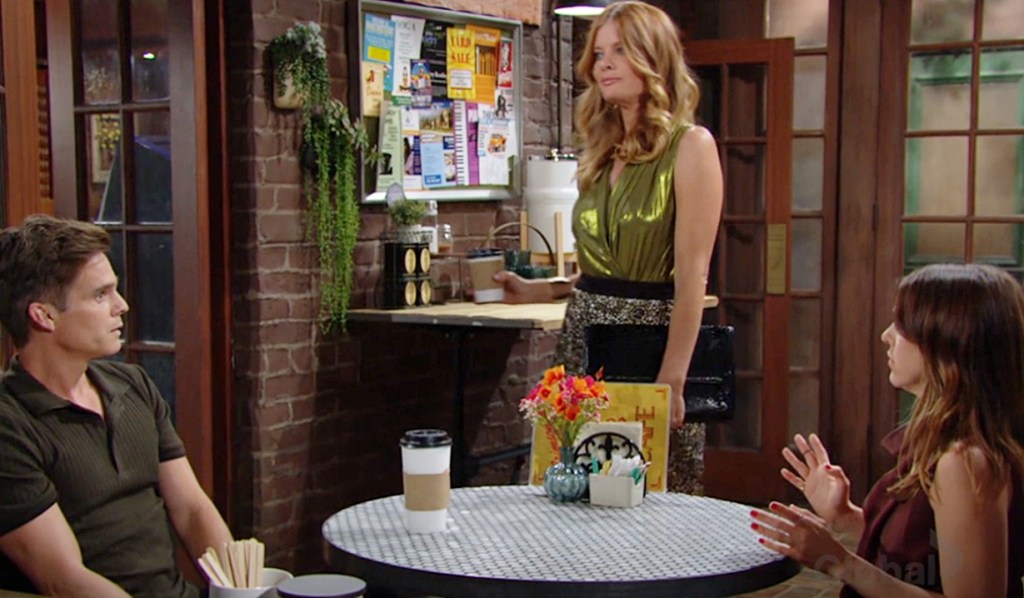 Inside the coffee house, Chloe tells Sally she’s a fan of her work. Sally saw her talking to Phyllis and asks if she’s there to give her a hard time. Chloe understands she and Phyllis aren’t on the best of terms, but she wanted to introduce herself because they’re in the same industry. Sally tells Chloe it’s nice to meet her and they get to discussing Chelsea and her breakdown. Chloe’s certain she’ll recover and believes everyone deserves a second chance. Sally couldn’t agree more. Chloe congratulates Sally on her promotion at JCV and explains her connection to Lauren. She thinks this is perfect timing and they may be able to help each other out. 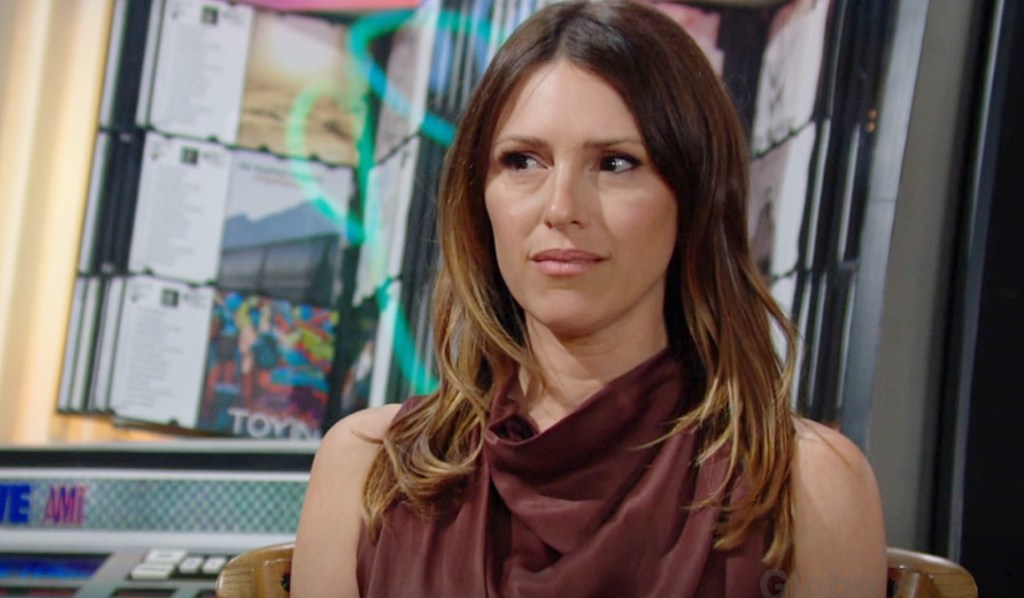 At the Abbott house, Ashland is enticing Harrison with a play-date with Johnny and Katie when Jack interrupts. Harrison goes for cookies and Ashland explains he’s starting chemo tomorrow so his son should continue to stay there. He’s thankful Jack and Kyle have provided the boy with stability. Ashland tells Jack to ask Kyle to contact him when he gets back, but Jack relays that Kyle’s not coming back and would love to have Harrison stay with them in Milan, if he’ll allow it. Ashland was going to allow Kyle visitation, but apparently he has other priorities. Phyllis arrives and Ashland remarks on her uncovering Tara’s plot before leaving. Jack asks why she’s there. Phyllis replies, “I need a friend.” 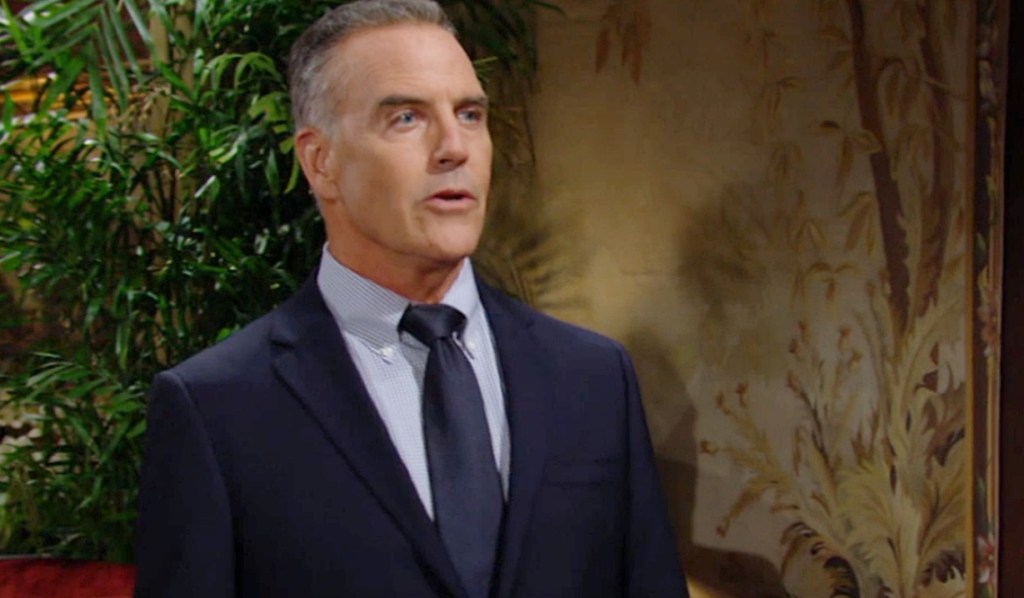 At Victoria’s place, Victor asks his daughter if she’s still alright with her decision to become engaged to Ashland Locke. Victoria’s taken aback. Victor reminds her it’s a rough road ahead. She assures him that they’re together, for as little, or as much time as they have. Victor isn’t questioning her decision; she found a man who’s worthy of her, but she’s like her mother and loves deeply, so she’s setting herself up for heartache. Victoria will be okay. She doesn’t want to lose Ashland, and if she does she’ll be devastated, but at least she won’t have any regrets. She plans to make all of their memories very beautiful and meaningful. “I’ve been in love before, but not like this.” Victor offers to plan the big wedding with Nikki’s help. He knows the enormous responsibility Victoria has with the merger and now she’s seeing Ashland through his treatment as well. Victoria concedes weddings take a lot of planning. Victor will handle it all. “Do we have a deal?” Victoria smiles, “Yes.” 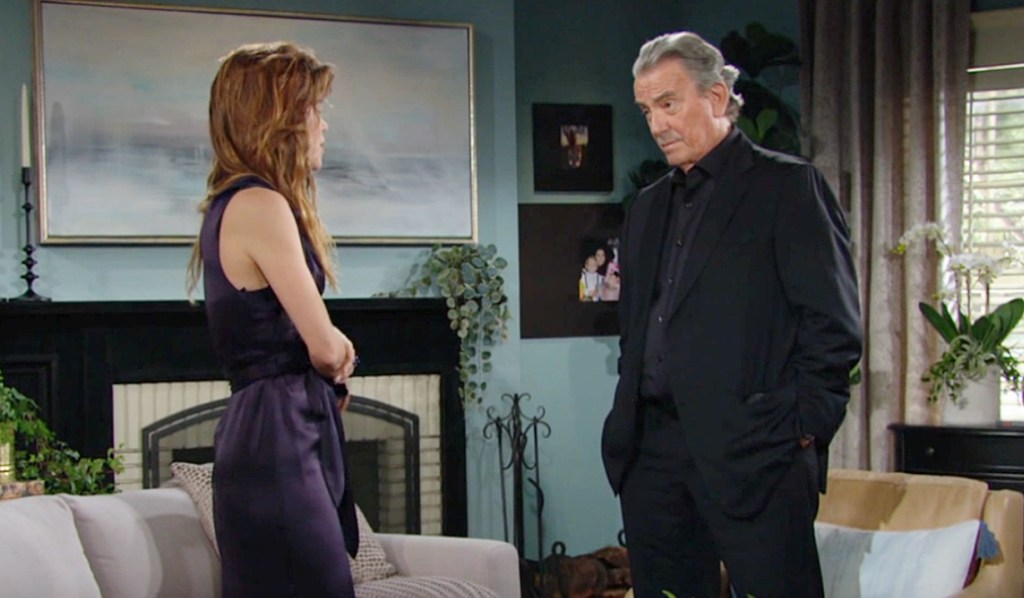 At Newman Media, Kevin busts in and confronts Adam. “You’re being too nice to my wife!” Adam can’t recall the last time someone complained about him being nice. Kevin’s convinced he’s hiding something. Adam understands. He suggests if this is giving Kevin so much anxiety, maybe Chloe should go work someplace else. Kevin blusters that he could care less about what happens with Adam and Chelsea, but he came there to put him on notice — if Chloe gets caught in the crossfire, there will be hell to pay. Adam admires how protective he is of his family; if he’d stood by Chelsea with the same devotion, who knows how things might have turned out. Kevin feels they’d have ended up the same way because the real Adam always comes out in the end. Adam sighs, “Okay, Kevin. We’re done.” Kevin knows who Adam is and always will be — it’s just a matter of time until that guy comes out again. 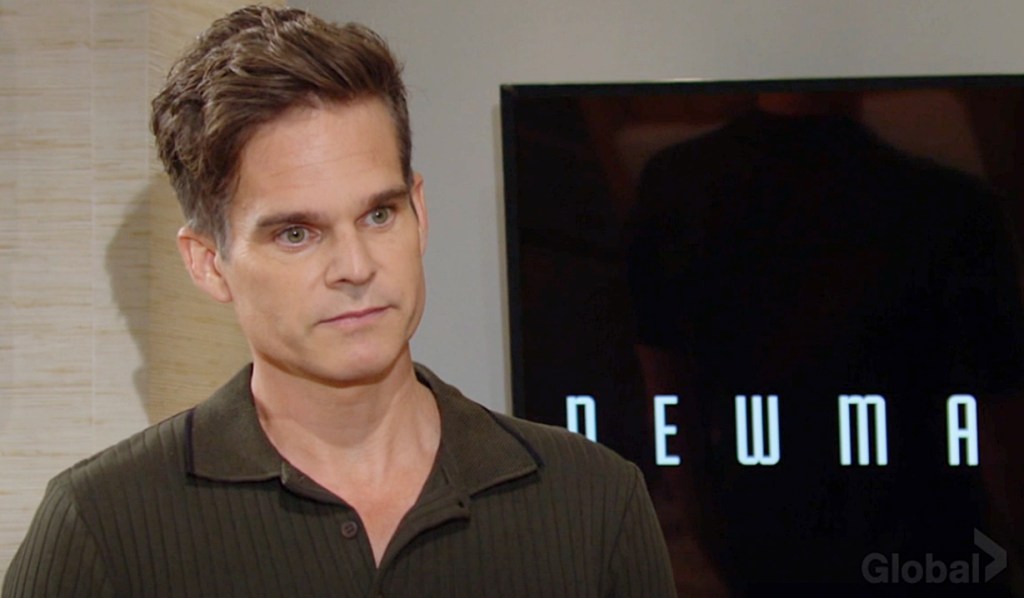 Next on The Young and the Restless: Chelsea tests the waters with Adam.

See Victoria’s past loves in the photo gallery below. Get your free daily soap-opera fix for The Young and the Restless — and all of the other daytime dramas — delivered straight to your email inbox by signing up for Soaps.com’s newsletter.

Lauren Fires a Shocked Sally Over...

Phyllis Vows to Get Even With Sally...