Monday, August 2, 2021: Today on The Young and the Restless, Sally pleads for another chance, Tara balks at Kyle's questions, and Phyllis plots her next move. 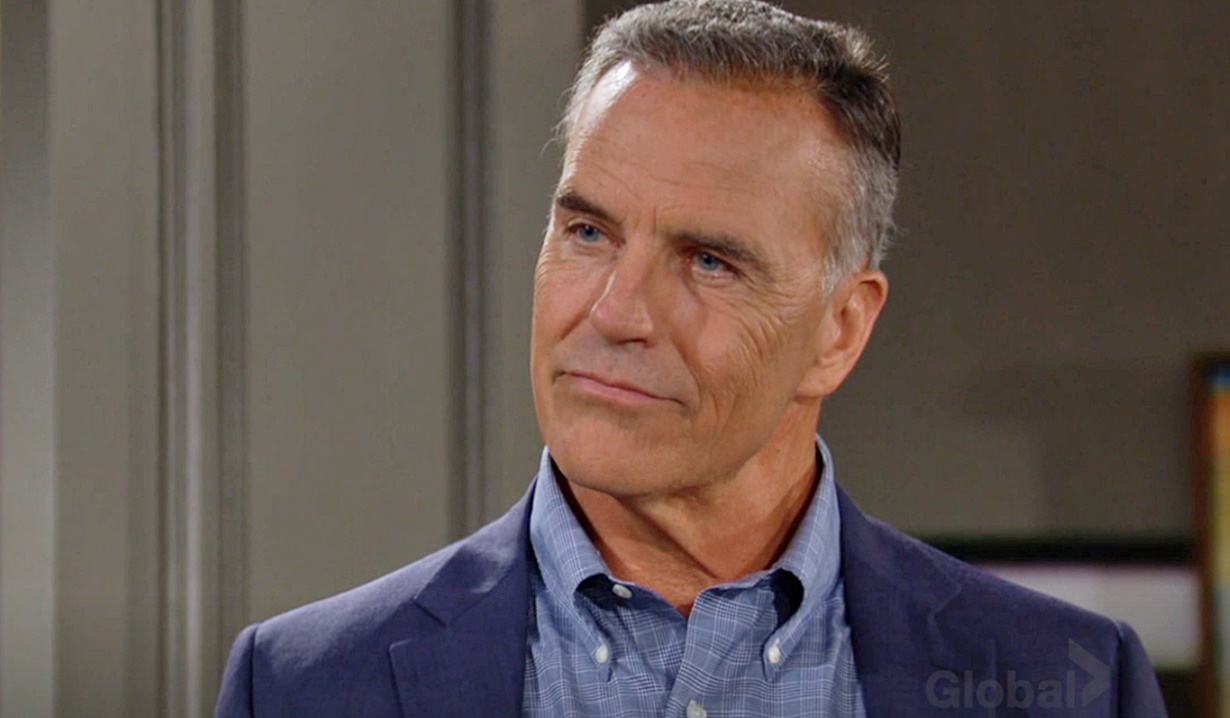 At Grand Phoenix, Phyllis disconnects from Angelina Marchetti and kisses all over Nick to welcome him back before taking him into the elevator to show him how happy she is that he’s back.

At the Abbott house, Jack warns Tara that Phyllis is throwing around some pretty wild theories about her. He understands that, as a parent, she may have pushed the envelope — it can happen to anyone. Jack pushes for her to give him the truth, but she insists she’s being as honest as she can be. Lauren arrives to see Tara and Jack leaves abruptly. Lauren tells Tara he seemed as though he had something serious on his mind. They go over the shoe line and Lauren wants to center the branding on Tara’s resilience. She mentions there were some documents they need that they haven’t received yet. Lauren emailed them. Tara promises to send everything outstanding to Fenmore’s ASAP. Once alone, she stews. 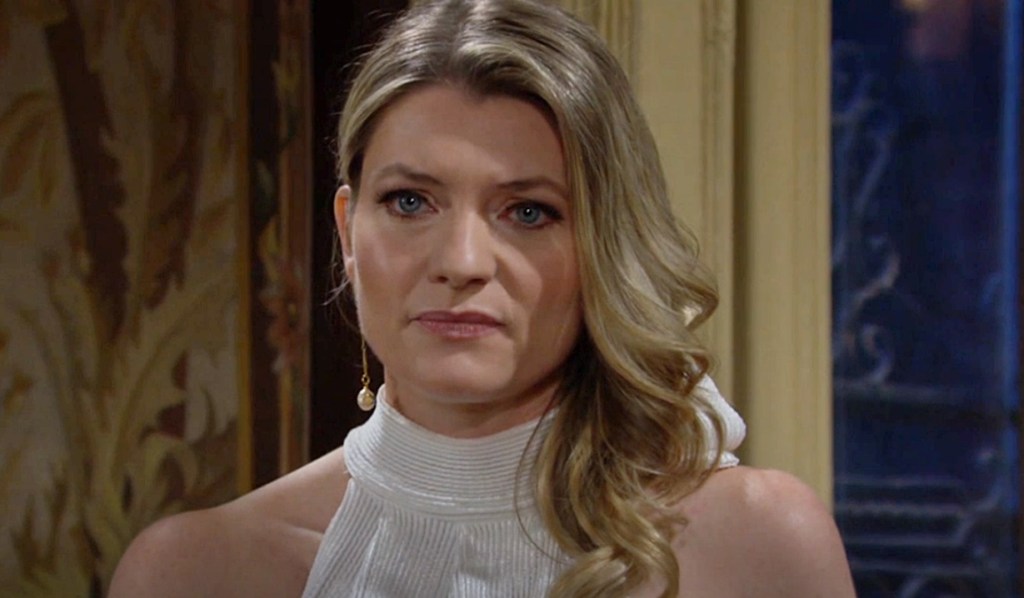 More: The Adam and Chloe twist that would blow minds

At Society, Kyle is curious as to who is out to ruin Sally’s life. She crabs about Jack listening to Phyllis, who is a conniving, manipulative liar. She’s been out to get her since the moment she came to Genoa City. Kyle wonders why she sounds so defensive. She’s a victim. Kyle feels she’d sound exactly the same if she were lying through her teeth. Sally insists she’s innocent, but Kyle doesn’t trust her. He doesn’t have any evidence at the moment, but she had better hope he never finds any. 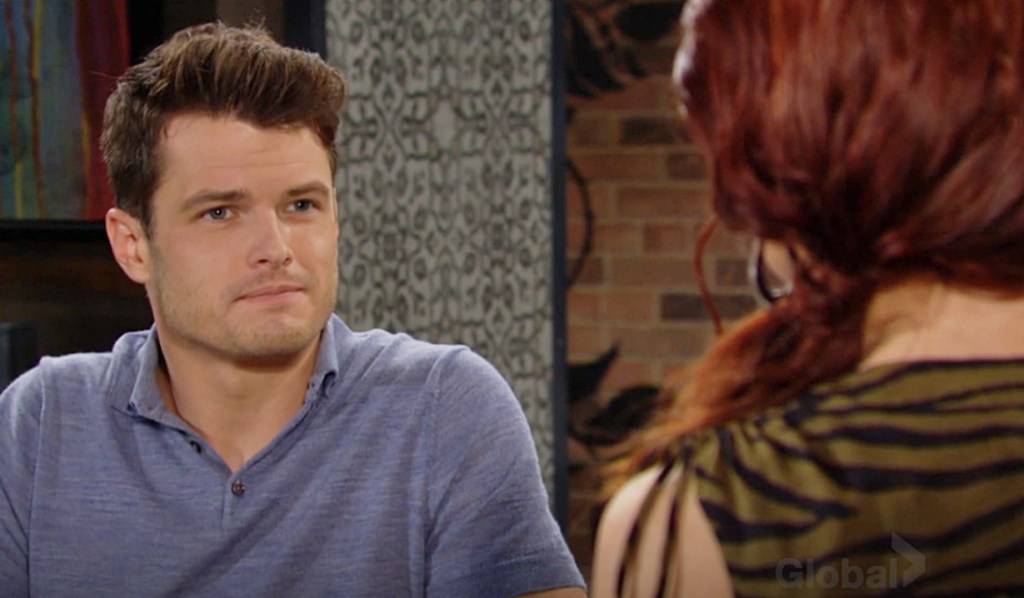 After Kyle leaves, Jack walks in. Sally hopes he’s reconsidered having dinner with her. She knows he’s not a man to judge until he has all the facts. She vows she didn’t do anything wrong and thinks deep down that Jack knows that. Sally appeals to him not to throw away what they have. Jack is very attracted to her and wishes that was enough, but it’s not. He doesn’t trust her. They go over her lie. Sally denies cheating her way into the top slot at JCV. Jack argues that doesn’t change who she is, or anything he’s said tonight. Jack attempts to leave, but Sally follows and pleads with him to spend time with her to build something. In time, he can take stock. Jack is tempted, but he’s seen the person she is once before. It was a mistake to think he could forget that — he can’t. 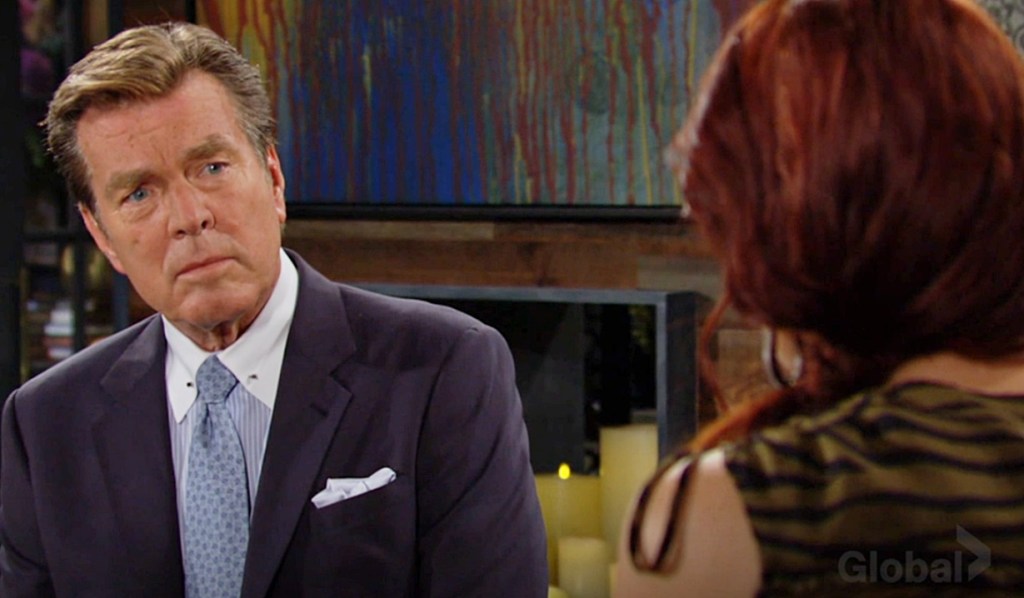 In New York, Victoria admires the bedroom of Ashland’s penthouse. As she walks over to take in an Anne Schwartz painting, Ashland grimaces and touches his chest. Vic notices and worries, but Ashland reassures her. She asks him not to pretend with her; she wants his authentic self. He can never say no to her. Ashland will bring the painting she loves back to Genoa City as well as some other important things. They chat about his various homes and he reflects that Tara spending time at the beach house made it easier for her to have an affair. Ashland wants to make the most of the time he has left — being there with Victoria in the moment feels right. “Everything is always better when I’m with you.” 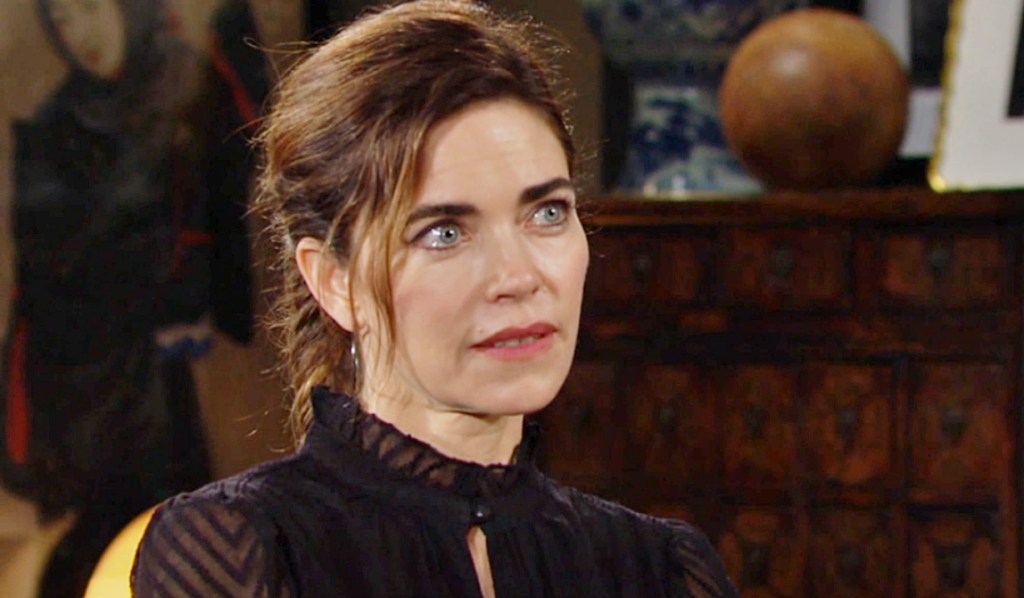 In their suite, Phyllis and Nick gush that the after-trip sex was great. Nick questions why she was in a rush to get him up there. Phyllis wonders if he thinks she’s up to no good. Nick reminds her how well he knows her. She sighs, “Alright. I have a story to tell you.” After Phyllis fills Nick in on her suspicions about Tara and Sally off-screen, he asks if she has any proof. Phyllis describes how she sent the text from Sally’s phone and got their confrontation on tape and gave it to Kyle and Jack. Nick will be angry too if they really did this to Summer but says she needs proof. Phyllis is working on it — she’s leaving for L.A. tonight. Nick learns she will be seeing Angela Marchetti and Eric Forrester, who should be able to fill in the blanks for her about how Summer got the job. She thinks Sally and Tara were behind it.

More: How Sally and Phyllis saved the Y&R snoozefest

Nick can’t understand why their daughter wouldn’t fight back. Phyllis theorizes they made it impossible for her to do so, which shows how far they’re willing to go to get what they want. Nick warns her not to put Summer in a bad position with her employer. Phyllis will be careful. She knows something is wrong — she can feel it in her bones! Nick is concerned, but Phyllis explains if she doesn’t do this, she’ll never forgive herself. Nick pledges his full support and announces he’ll come with her. Phyllis urges him to stay there and keep her in the loop. He agrees and they kiss. 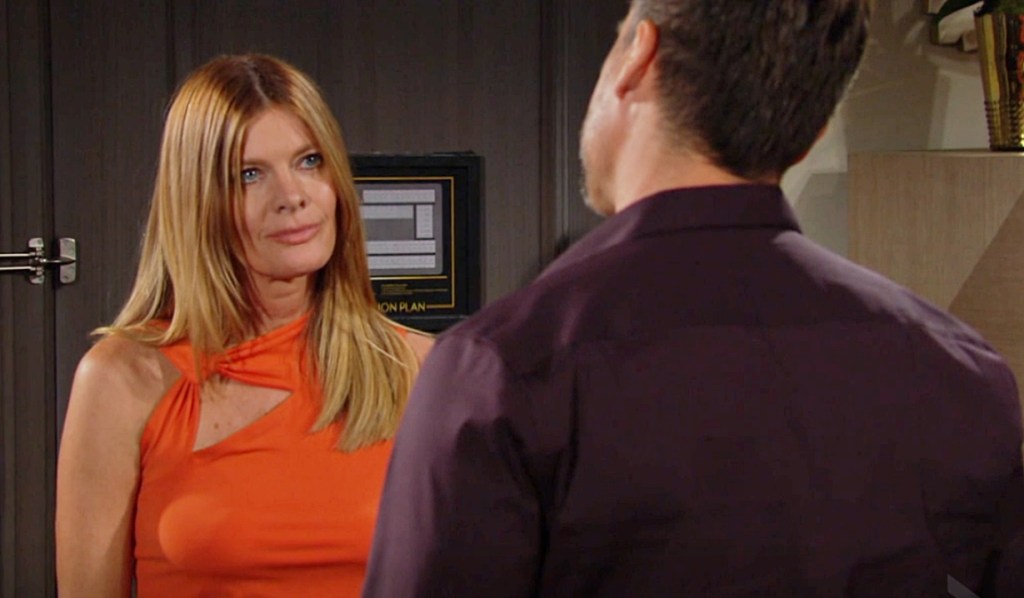 In Ashland’s penthouse, Victoria awakens to him telling her he wants to let go of everything that came before her — he won’t bring anything from New York with him. Instead, he’ll focus on his health and on spending as much time with her as he can get. Ashland is in awe of Victoria and everything she’s pulled off. He marvels at what they could accomplish together even if time is short. “You make me feel like I want to be absolutely and fully alive for every moment I have left.” Later, Ashland reports that he has an appointment with a specialist with promising trials. He wants her to come with him. She agrees. “I’m all yours. I’ll be with you every step of the way.”

Kyle arrives at home to find Tara agitated. She got a call from Ashland’s assistant. Her ex-husband has gone to New York to purge their shared homes. It’s jarring even though it was inevitable. Kyle muses that she would be virtually homeless outside of this situation; that would be pretty terrifying and make her worried about her options. Tara doesn’t know what she wants him to say. Kyle remarks that she never mentioned how important these homes were to her before. Tara talks about the things she’s lost… and gained with this new family. She would never do anything to jeopardize it. She doubts they’d be having this conversation if Phyllis hadn’t accused her of having an agenda. Tara urges him to stop listening to the woman; she can feel the ground shifting under them. “I can’t live this way, and I won’t!” 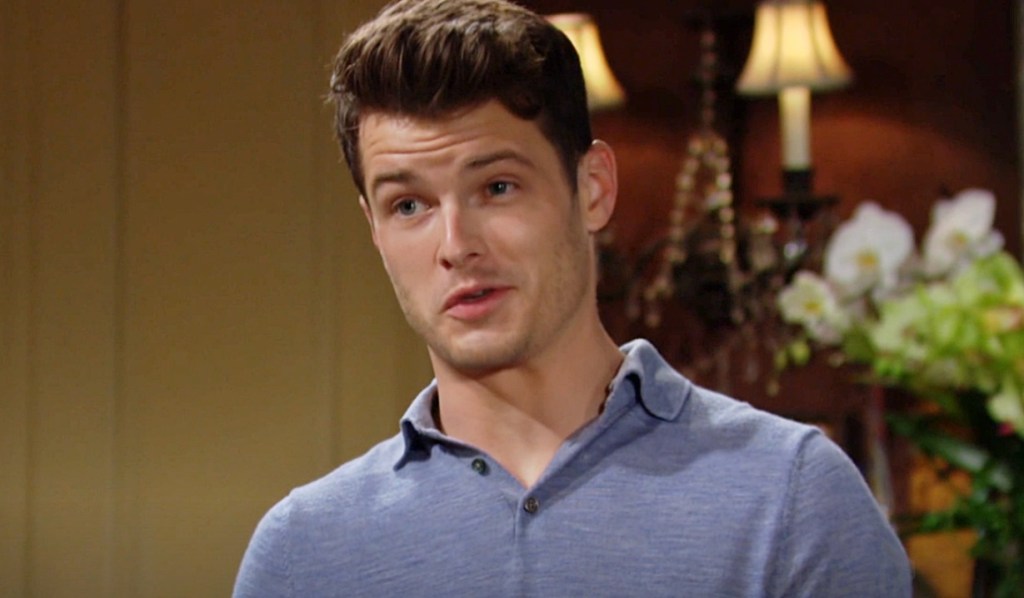 In the hotel lobby, Sally spots Nick and Phyllis, with he suitcase. She snarks, “How will this place function?” and asks, “Where did you say you were going?” Phyllis snaps, “I didn’t.” Sally trots off to the bar and Phyllis assures Nick she’ll get enough proof to blow this out of the water; then the Abbotts will be rid of Tara and Sally and their daughter can come home. Nick nods. “Alright,” and sees her out.

Next on The Young and the Restless: Victor stops Adam from retaliating against Victoria.

Phyllis Gets One Big Step Closer to...

Ashland Proposes to Victoria as...