Wednesday, May 19, 2021: Today on The Young and the Restless, Tessa romances Mariah, Lily surprises Billy, and Summer argues with Kyle about his plan. 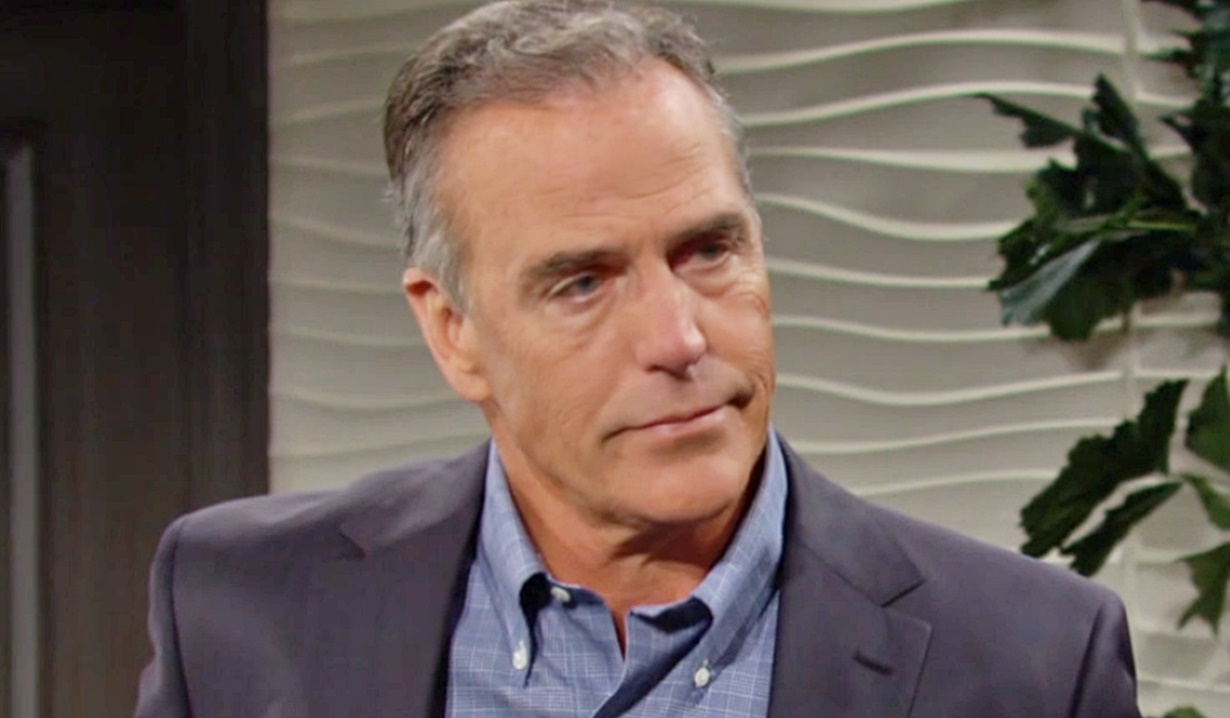 At the hotel, Phyllis asks Crystal, the lady in the green uniform, if she has seen Summer. She hasn’t.

In Kyle’s suite, Ashland wants to know where Tara and Harrison are. Kyle muses that this is unexpected; it’s not usually advisable to travel after a heart attack. He claims not to know where they are. Ashland warns him not to lie to him; he can still smell her perfume. Kyle sticks to his story, but asks Locke if it’s occurred to him they don’t want to be found. Summer invites him to search the room. Ashland warns Kyle this doesn’t bode well for his future and vows he’ll regret lying to him as the Abbott closes the door in his face. Summer tells her fiancé that was brave and very sexy, “But oh my God what were you thinking?!” Kyle pulls out his phone to text Tara and warn her. 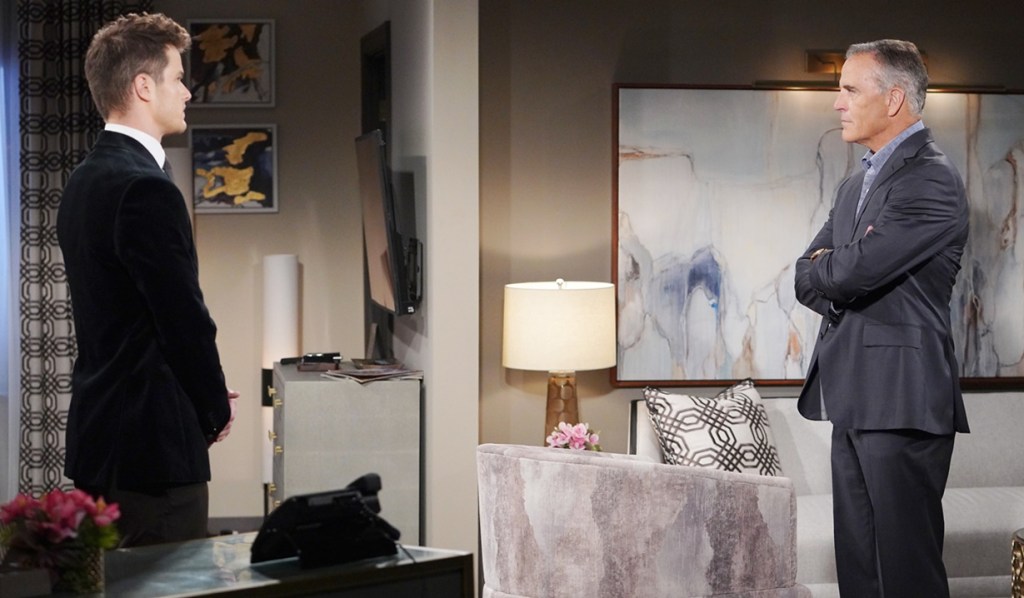 At Society, Abby and Mariah are puzzling over Tara Locke showing up at the party when Tessa walks in. She worries she’s super late, but they inform her it was canceled. Tessa suggests to Mariah that they make it a date night instead. Abby hopes to resume those special evenings with Chance when he returns. They invite her to join them, but she declines and leaves. Tessa and Mariah decide it’s up to them to save romance. 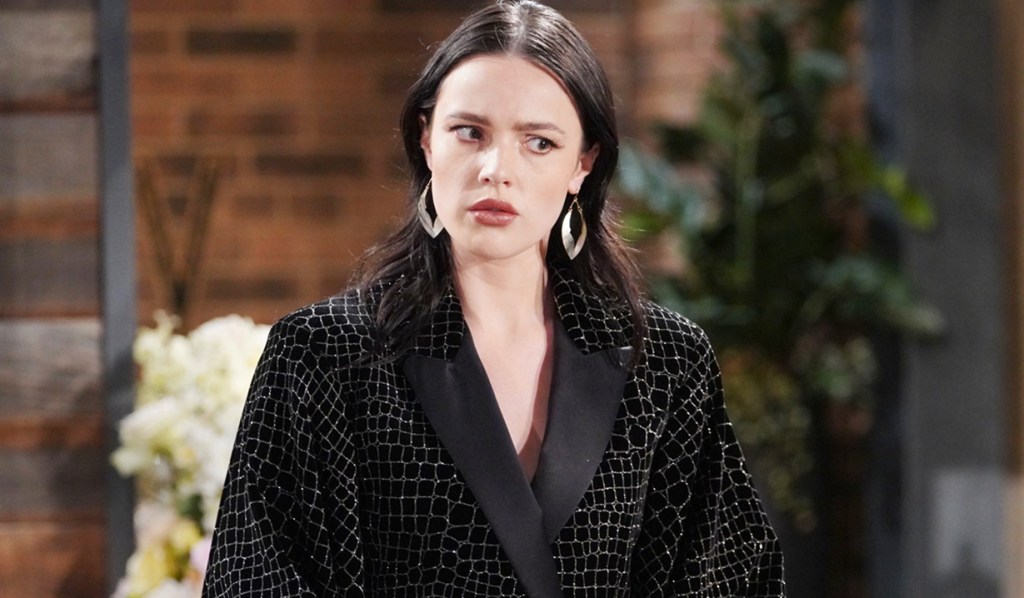 Tessa snaps photos of Mariah, who groans, “Turn that thing off.” Tessa will make a photo album and give a copy to Abby to show Chance. Mariah muses that she’s putting on a brave face about missing her husband and they shouldn’t give her any reminders.

At Chance Comm, Billy and Lily discuss him going to look after the kids while Victoria’s away in St. Louis. Talk turns to playing games and they begin to flirt. Lily teases her games have rules. Billy wonders if she’ll punish him if he doesn’t follow them. Just then, Victoria knocks and interrupts. Billy wonders why she’s not in St. Louis. Victoria closed her deal. She admits she came back for the engagement party and they puzzle over it being canceled. Billy asks about Faith, and then Victoria warns that she saw Ashland Locke’s private jet at the airport. She hopes he’ll make Adam and Victor miserable from his board seat. She’s mad as hell at how it all went down but will channel it into her work. 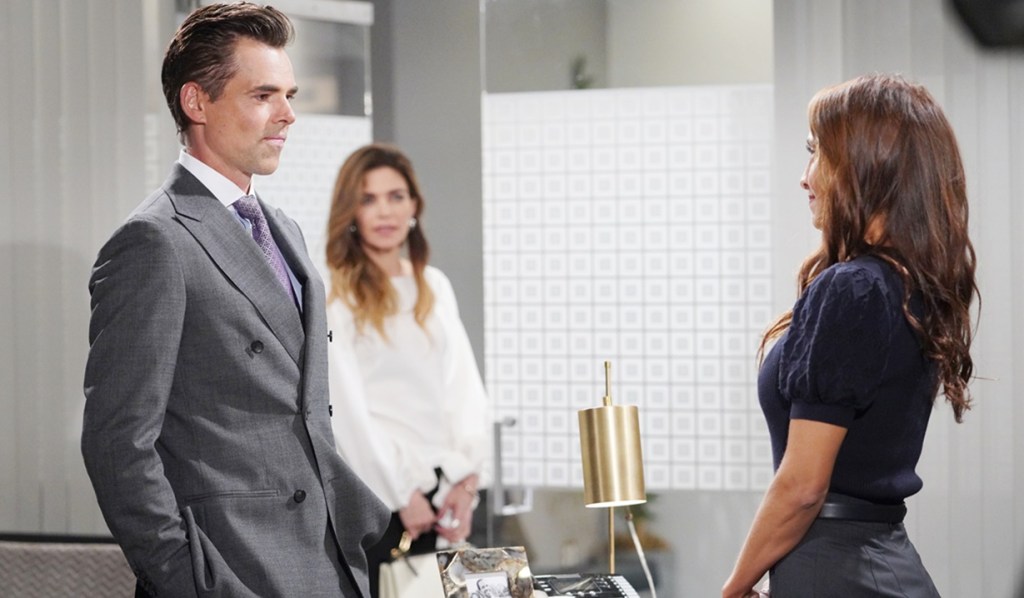 More: Will Victoria move on from Billy?

After Victoria leaves, Lily asks Billy if he’s still upset about Cyaxares. Billy’s happy and in love. They go over the piece on Chelsea and Lily’s pleased that Billy didn’t twist things. Billy stuck with the facts in case Victor and Adam declare war. “If Victor wins, he’ll make sure we end up with nothing.” He didn’t want to give them ammunition by running a hit piece. Lily marvels at the way things turned out with Chelsea. Billy’s certain Adam pushed her to the limit; he’s a threat to everyone and everything including Chance Comm. He has an aggressive plan in mind. Lily sighs; “Lay it on me.” Billy relays he’s been doing a lot of thinking about what Adam and Victor would do. He thinks they need to undermine Cyaxares during the transition period before they even come out of the gates. They need to create the perception that they cannot be trusted to be arbiters of fair reporting. Lily surprises Billy by agreeing that they need to be proactive; she wants to start brainstorming now. Billy informs her it will have to wait — he has to take her somewhere right now.

Abby runs into Victoria at Crimson Lights and they compare notes on having no one to rush home to. Victoria asks if everything is alright. Abby says the only thing wrong is that Chance isn’t back and the baby isn’t here yet. They go over her blessings and Abby decides she’ll focus on the good things in her life. Victoria understands she feels like it’s on hold. “You can always be honest with me.” Abby admits the party was a great diversion, but Summer and Kyle are a reminder of what she’s missing. Victoria reassures her. Talk swerves back to the canceled party and Victoria’s stunned to hear that Tara Locke showed up with her son and was whispering with Kyle. She hopes it won’t be an issue for Kyle and Summer. They decide to have dinner together at Society. Victoria will catch up with Abby there later. 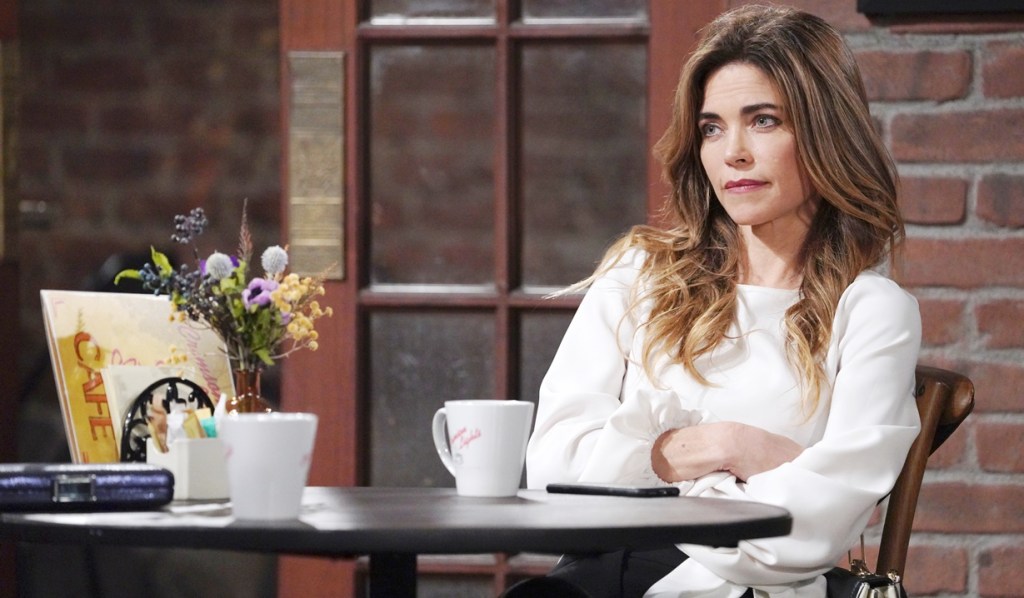 In Grand Phoenix’s lobby, Ashland pressures Crystal to reveal check-in information. Phyllis appears and asks if there’s a problem. Locke tells her not as long as he gets what he wants — otherwise the hotel will be history. Phyllis learns he’s looking for his wife who may have checked in under an assumed name. She can’t give him the guest list. He threatens to bring in the press and the police since she’s harboring a kidnapper. Phyllis thinks they’d be more interested in him trying to strong arm her into revealing personal information — she has a lot of privacy laws backing her. Ashland walks away pulling out his phone. 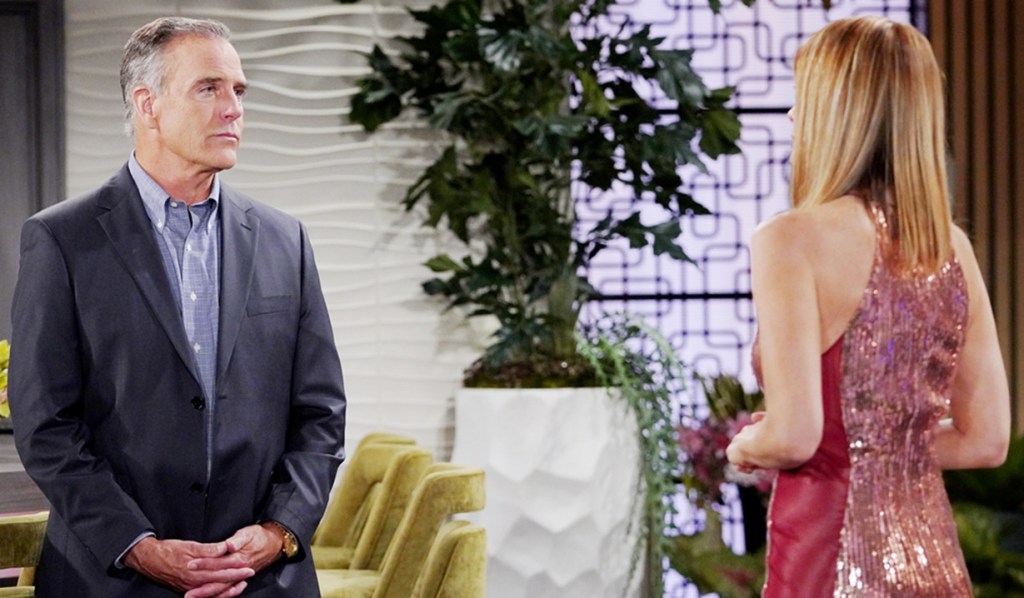 In Kyle’s suite, he takes a call from a panicked Tara. He advises her to stay in her room since he’s still in the hotel. Tara appeals to Kyle to act. “I cannot lose my baby boy.” Kyle knows, and will be in touch. He disconnects and tells Summer he has to protect his son. The only way he can do that is by going public with his affair with Tara and claiming paternity. Summer is floored that he’s already made his decision without discussing it with his fiancée. Kyle reminds her Locke it out for blood and he can’t stand seeing him interrogate her. Summer argues he misses his son. Kyle shouts, “It’s not his son!” Summer believes there are other ways to solve this, but Kyle worries Ashland will take the boy from his mother and traumatize him. Having seen his face tonight changed his perspective. Summer warns he needs to slow down and think this through. She can’t imagine Ashland harming Harrison; he knows he needs his mom. Kyle wishes he could believe that. Summer fears if Kyle goes public whatever Ashland does next could be a thousand times worse. 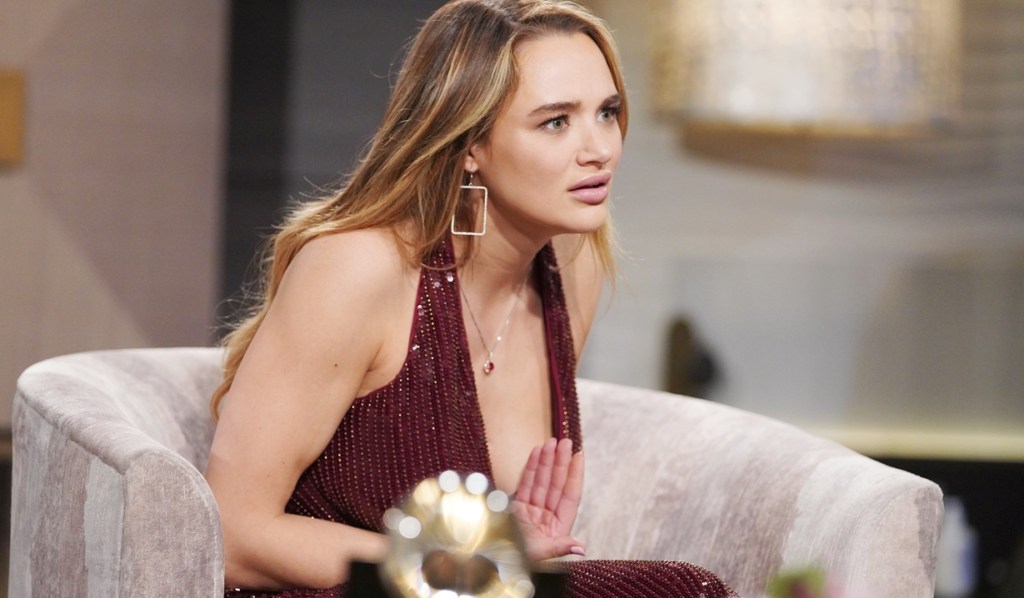 Soon, Tara shows up at Kyle’s room. Summer asks why she’s there. She needs to know everything Ashland said to them. Kyle reveals he was looking for a fight but they stonewalled him. Summer has a better understanding why she’s so scared of him. Tara’s sorry, this isn’t her fight. Summer responds, “You’re right. It’s yours.” Just then, she gets a text from Phyllis warning that Ashland Locke was in the lobby threatening to call the police and asking what’s going on. Kyle asks who texted her and Summer updates them. Tara worries this is spinning out of control. Kyle steps aside with Tara and assures her they won’t lose — he’ll make sure of it! Summer looks concerned. 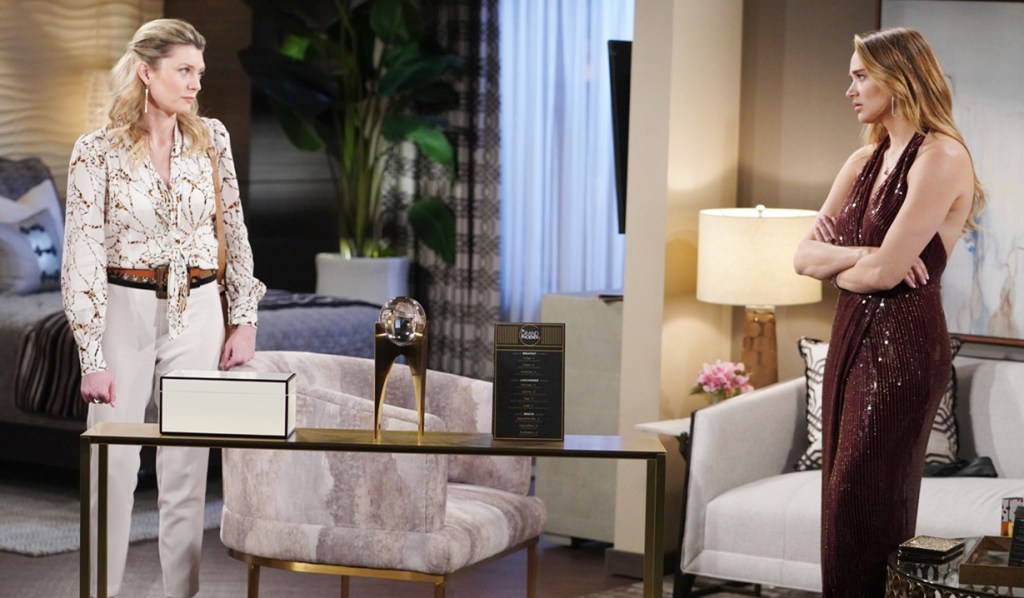 More: Why Skyle’s situation need to get even messier!

At Society, Tessa and Mariah are enjoying their date night but Mariah’s still worried about Kyle. She hopes if they reschedule the party, Tessa can be there. Talk turns to making an art piece out of her ultrasound photos. Tessa accuses her of not wanting her picture taken — she’s getting more beautiful every day. “You are not allowed to get self-conscious about the changes in your body.” She runs down Mariah’s sexy attributes and reveals she booked them a suite at the hotel for the night with massages.

More: *This* secret could bring Nick and Adam together

In the hotel lobby, Mariah asks Tessa what other surprises she has in store for her. Tessa muses about getting her out of that dress and kissing her passionately. They need to make the most of this staycation. 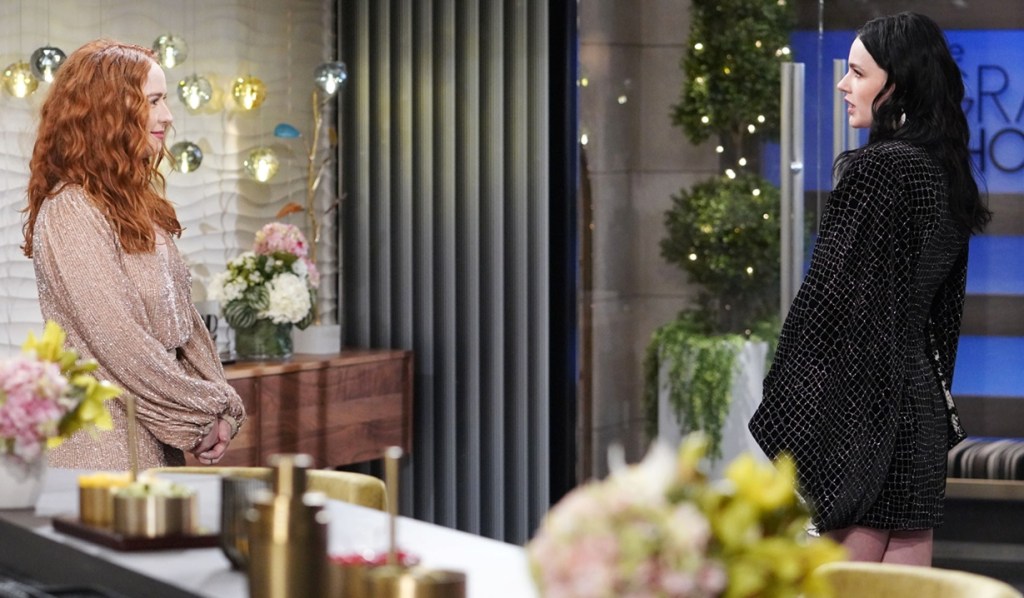 Victoria wanders into Society, spots Ashland, and greets him. He invites her to join him for a cocktail. Victoria decides she will since Abby’s not there yet and informs him he’s buying since he dashed her dreams of owning Cyaxares. He quips, “You drive a hard bargain.” She tells him, “You have no idea.” 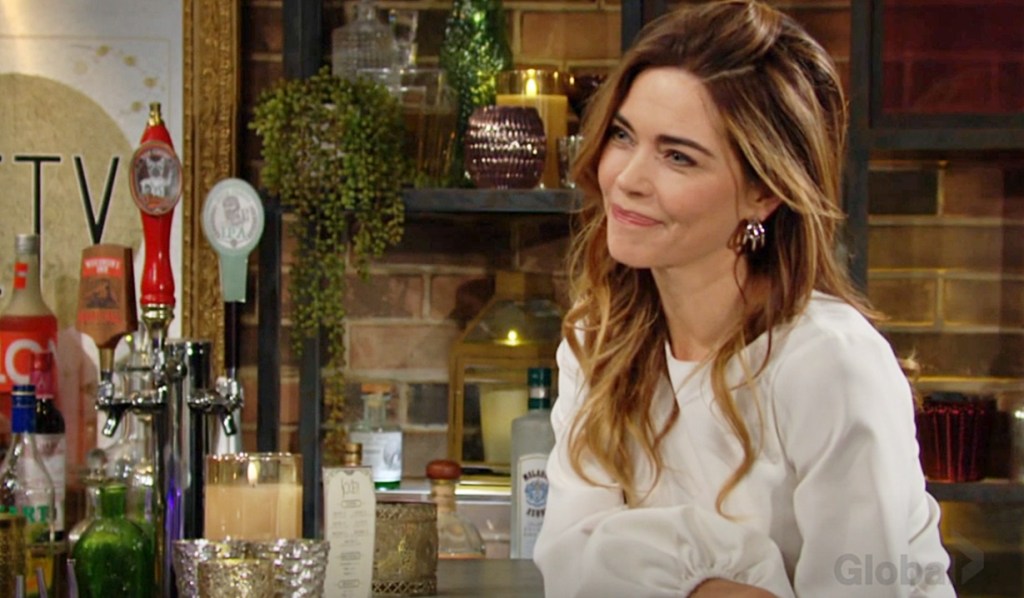 Next on The Young and the Restless: Chelsea seeks forgiveness.

Look back on Tessa and Mariah’s romance in the gallery below. Get your free daily soap-opera fix for The Young and the Restless — and all of the other daytime dramas — delivered straight to your email inbox by signing up for Soaps.com’s newsletter.

As Kyle Reaches a Major Decision...