As Kyle Reaches a Major Decision About His Son, an Unwelcome Visitor Arrives at His Door

Tuesday, May 18, 2021: Today on The Young and the Restless, Amanda meets with Imani, Faith asks Rey for help, and Phyllis comes clean with Nick. 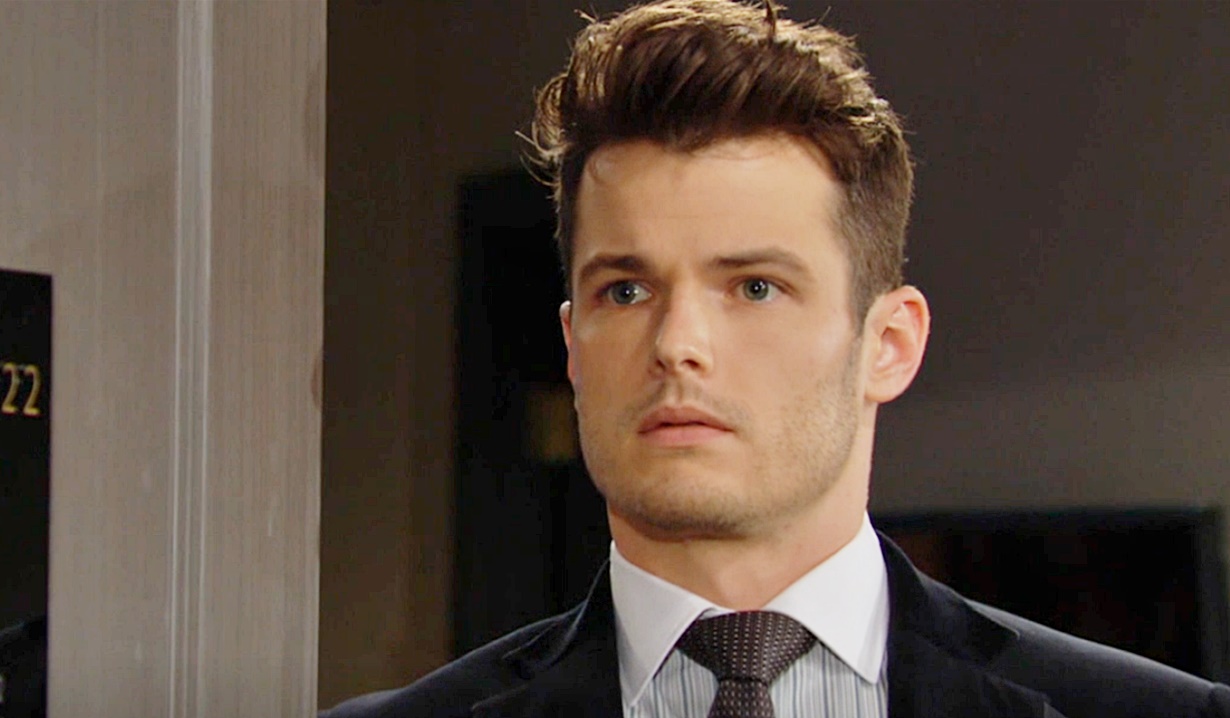 At Society, Jack looks at his watch by the door. At the bar, Nick questions Phyllis, who assures they haven’t been gone that long. Abby tells Mariah to turn up the music so Summer and Kyle don’t come back to a sad party. Meanwhile, Phyllis asks Nick to lighten up. He threatens to call Summer if she doesn’t come clean with what she knows. Across the room, Jack leaves Summer a voicemail. He can’t reach either of them — if they need help they should reach out.

In the Grand Phoneix lobby, Summer paces and waits for Kyle.

In a suite, Kyle reminds Tara that they agreed it was in Harrison’s best interests to ignore the fact he’s his father. Tara warns that Ashland will go after the boy in the divorce proceedings — and he’ll win custody too. She won’t give up her son, so Kyle will have to step up and claim paternity. Kyle calls her out on her change of heart. Tara insists Ashland will take full custody; the truth is their best weapon. Kyle thinks it would be like waving a red flag in front of a bull.

More: See Ashland mix it up with Victoria

Tara reveals she arranged to have it look like they went to Virginia to throw her husband off, but she drove straight there. “You are the only solution to the threat against our son.” Kyle has to talk to Summer before making a decision. Tara exits, reminding him that their son’s future is in his hands now. 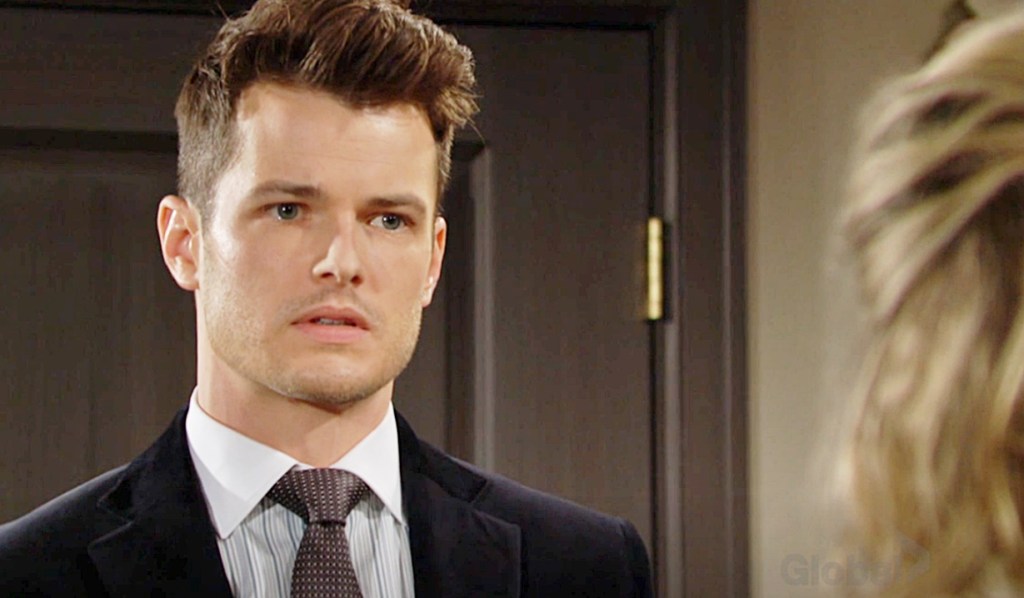 At Sharon’s place, she’s glad after everything they’ve been through, her connection with Rey is still there. He agrees. They promise not to let things get so bad again. Faith appears and is thrilled to hear he’s back for good. When Sharon goes to the kitchen, Rey apologizes for the trouble between her mother and him. Faith asks if things are truly back on track. Rey assures her that this time it will last. Sharon listens as Rey tells Faith he’ll do whatever is in his power to make sure they never get off track again. After, Faith asks Rey to help arrange for her to see Moses — it would cheer her up. Rey will talk to her mother about it. 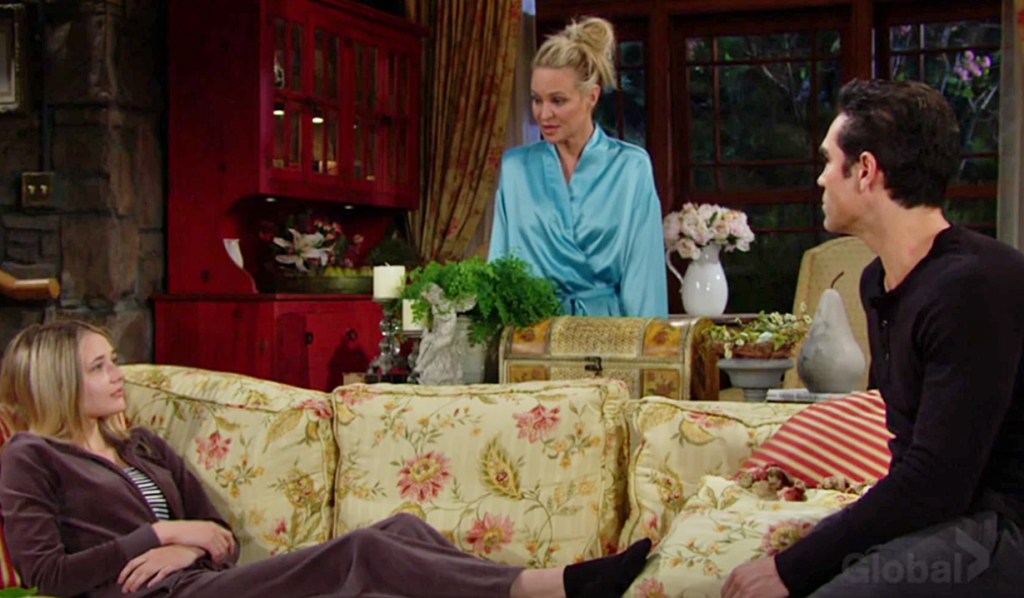 At Devon’s place, Amanda still has her doubts about Imani’s motivation for wanting to help. She’ll keep her guard up. Devon thinks that’s smart. She thanks him for having her back. Moses appears, and Amanda greets him before heading out. Devon reminds her she can walk away from the case whenever she needs to.

After Amanda leaves, Moses watches baseball with Devon and his thoughts wander to Faith. He tells Devon that he hasn’t connected with her since she left the hospital and confides that her father told him to back off. He wants to be there for her. Devon asks how close they’re getting these days. Moses dances around it briefly before admitting, “Yeah, I like her. I like her a lot.” Devon has an understanding of where Nick and Sharon are coming from in wanting them to slow down. He teases that maybe his jokes aren’t funny enough. Moses laughs; Faith gets his jokes and he needs to be there for her. He receives a text from Faith and grins. 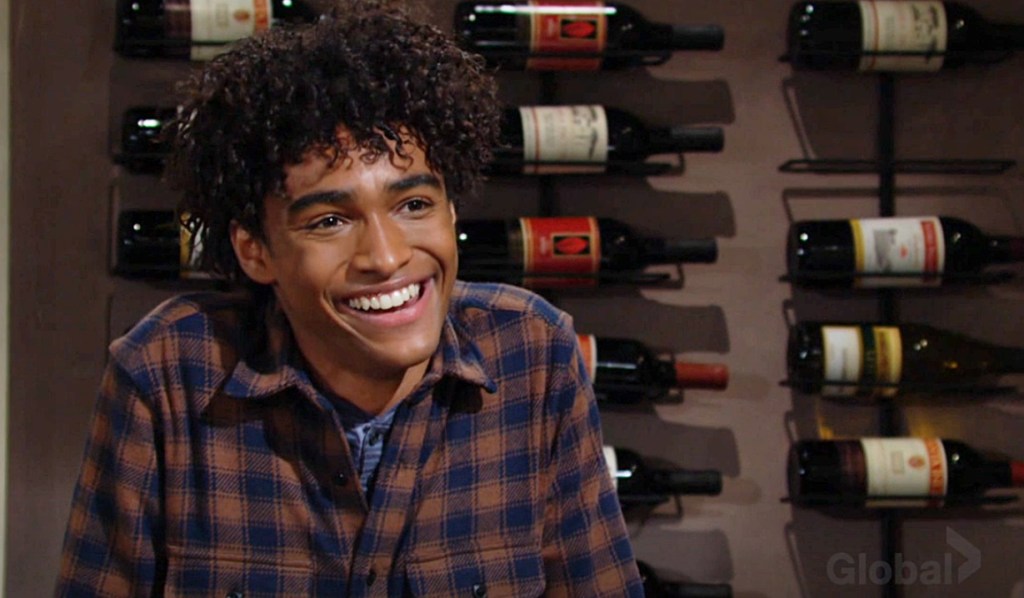 At Crimson Lights, Imani’s grateful Amanda agreed to meet her and is hopeful she’ll let her work on the case. Amanda questions if this was her call or if their grandfather forced her hand. Imani makes her own decisions, which may be something they have in common. She refuses to be bullied, even by Sutton, and chose to accept her. They discuss their grandfather’s political career and Imani admits he may have cut a few corners but he wouldn’t have had anyone killed. Amanda muses, “Even if Sutton isn’t guilty of murder, do you think he’s capable of it?” Imani doesn’t think it matters what she thinks and asks what Amanda is really after. Amanda needs to know what everyone in her new family thinks of everyone else. Imani answers her question with a “yes;” depending how far he’s pushed. Amanda has reached her decision and welcomes Imani to the team. 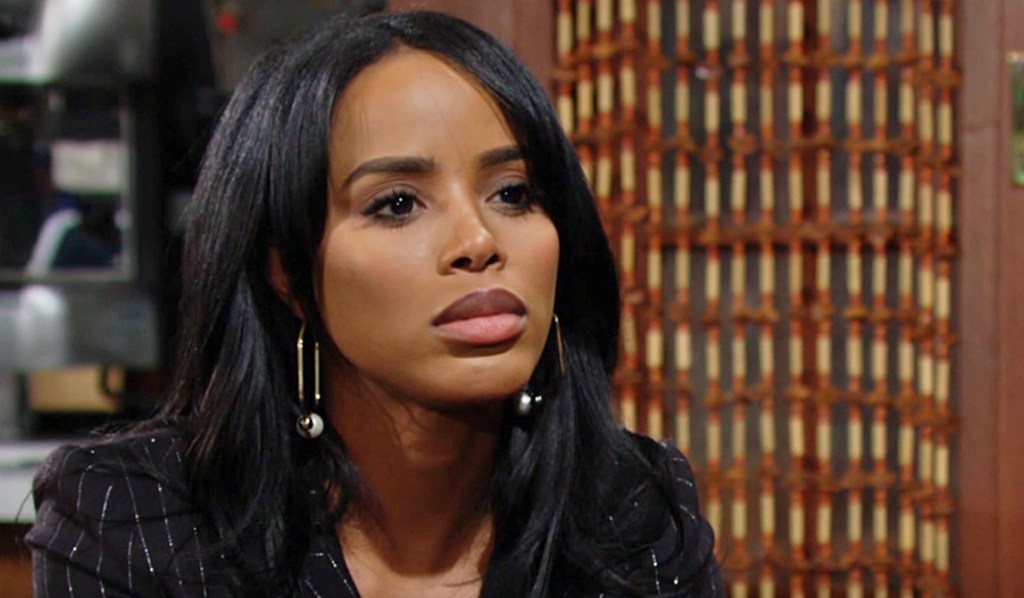 At Society, Phyllis warns Nick not to get mad at her before revealing that Kyle had an affair with Tara Locke before he and Summer were together. Ashland became suspicious, and if he finds out there will be hell to pay. Nick asks how long she’s known about it. Phyllis has known for a while, but asked her not to tell him. Nick thinks the secret will be out soon; Tara showing up at the engagement party isn’t exactly subtle. Phyllis doesn’t want to be too hard on Kyle, but Nick thinks maybe he and Summer should be over. He asks if Jack knows. Phyllis believes Kyle spoke to him. 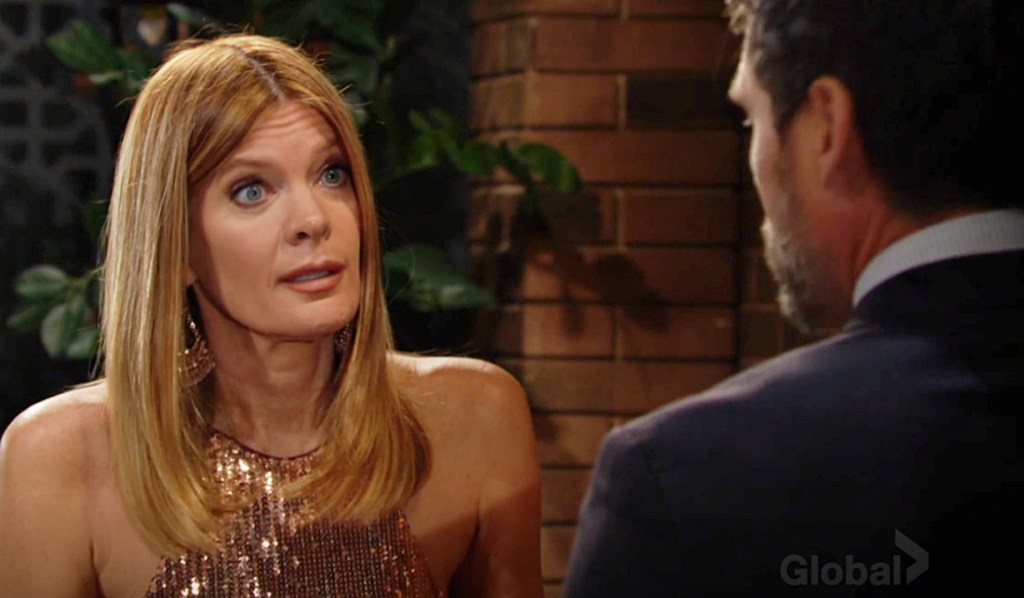 Meanwhile, Mariah and Jack discuss the situation. She assures him Kyle and Summer can deal with this. Nick joins Jack and announces he just heard about Kyle and Tara’s affair. Jack assures Nick that Kyle won’t let anything come between him and Summer. Nick’s unconvinced, but gets a text from Christian’s nanny and has to go. He lets Phyllis know, and grumbles about their daughter making a big mistake marrying this guy.

In Kyle’s suite, Summer learns that Tara wants Kyle to come forward and claim paternity to stop Ashland from getting custody of Harrison. They know what he’s capable of from Jabot and this could get much worse. Summer agonizes. Kyle assures her he is still up for celebrating marrying her; they should return to the party. 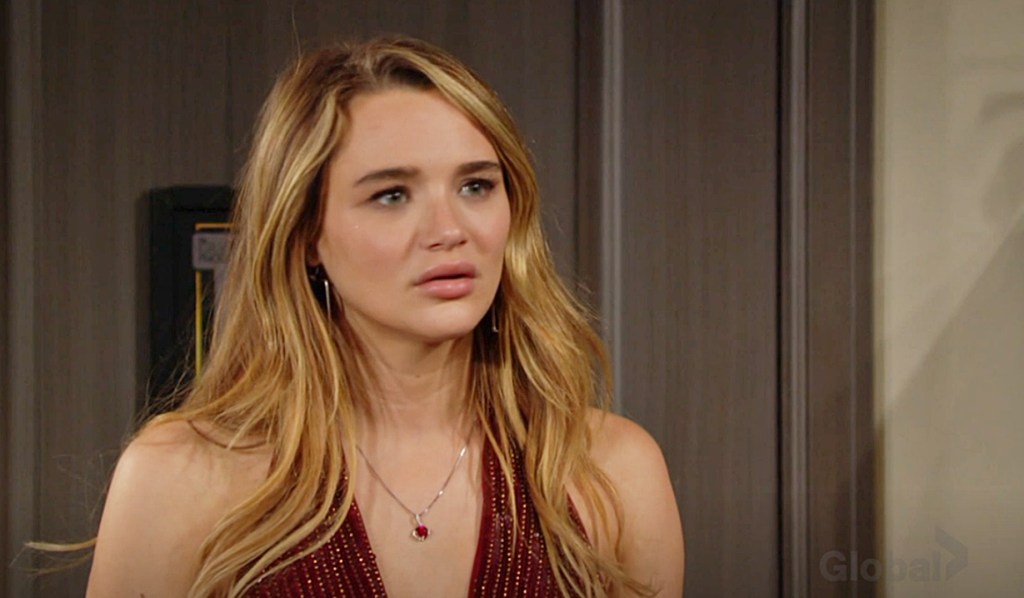 At Sharon’s place, Faith responds to Moses’ text as she heads upstairs. Sharon rejoins Rey and vows to hold up her end of the marriage too.

At Society, Abby, Mariah and Jack have called the other guests and told them not to come. Abby and Mariah go to eat cake, and Summer and Kyle finally arrive. Jack asks them what is going on. Kyle hopes everyone is still in a party mood. He walks off with Jack. Phyllis warns Summer that she told Nick what is going on — she had to. She has to ask, “That little boy…” Summer interrupts, “Don’t ask me.” Phyllis backs off, but they’re going to talk later. Elsewhere, Jack wants answers from Kyle, who will only say the situation is under control and asks him to trust him to take care of this on his own. Summer and Kyle exchange a glance. 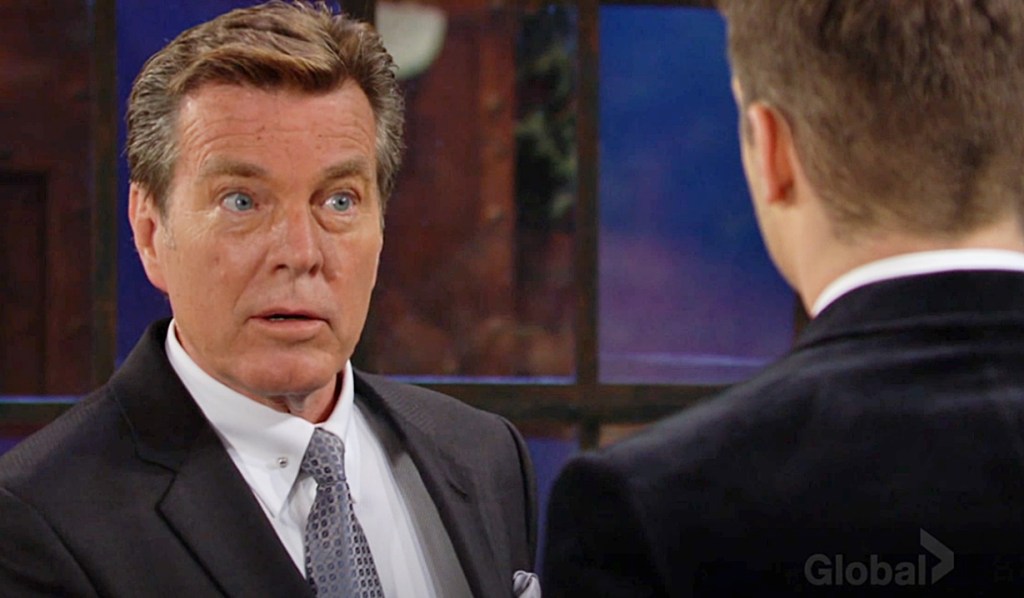 At Devon’s place, Amanda updates him that she feels Imani is holding something back. Devon’s taken aback to hear she answered “yes” to whether Sutton was capable of murder. She may not have the allegiance to the family she previously believed. She’s more determined than ever to get to the bottom of this. Devon warns her to be careful. Amanda intends to, but she’ll also be prepared — that’s why she has to get back to work. Devon doesn’t want her to get burnt out and suggests she turn off the lawyer switch tonight. Amanda heads upstairs and he follows. 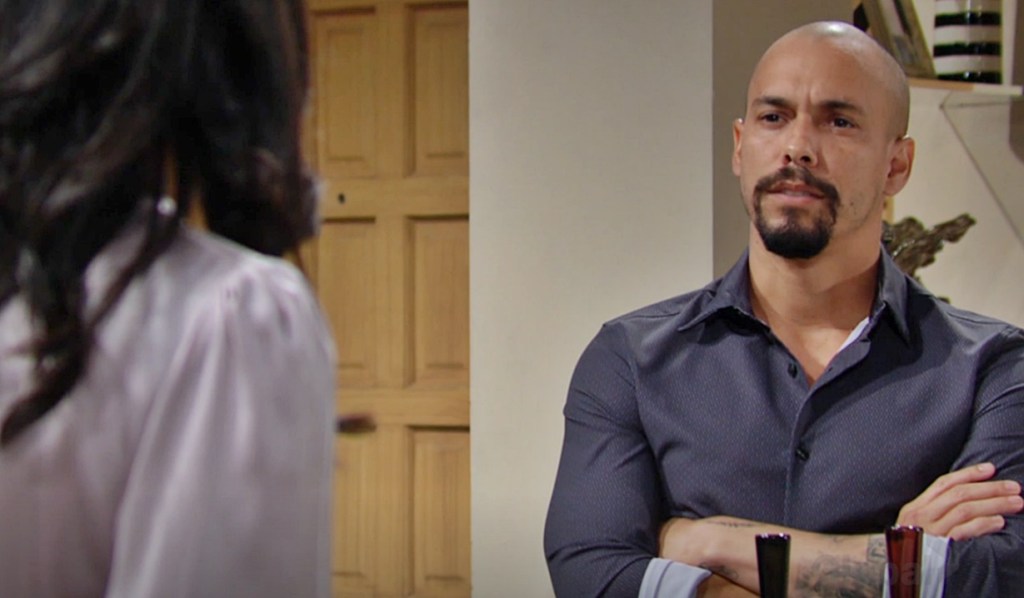 At the hotel, Phyllis updates Nick that she couldn’t get any more information out of Summer. She left them at Society. She asks him to relax and not to confront Kyle; they’re adults. Nick nods, “You’re probably right.” Phyllis has other things she’d like to do with him tonight. Nick decides it can wait until morning. 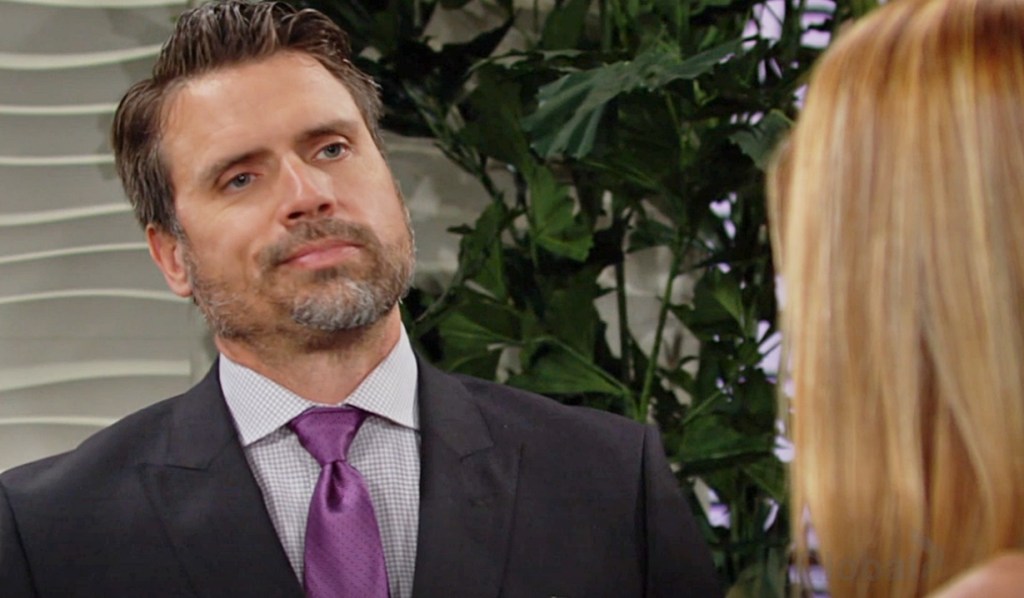 In their suite, Kyle has something to tell Summer. He’s come to a major decision. “I know what I need to do about my son.” There’s a knock on the door. Summer’s eyes widen. “Kyle, who could that be?” Kyle opens the door to Ashland Locke. 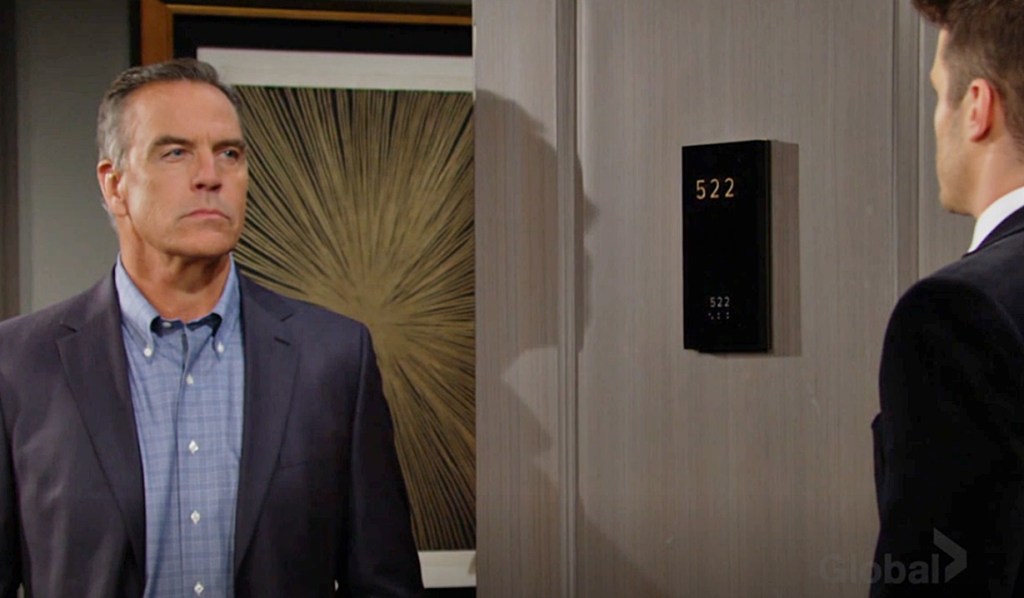 Next on The Young and the Restless: Kyle stands his ground with Ashland.

Look back on Kyle and Summer’s romance in the gallery below. Get your free daily soap-opera fix for The Young and the Restless — and all of the other daytime dramas — delivered straight to your email inbox by signing up for Soaps.com’s newsletter.

Ashland Goes on the Rampage at the...