Tuesday, May 11, 2021: Today on The Young and the Restless, Adam and Faith undergo surgery, Phyllis recalls a difficult time, and Nick has a plan for Adam. 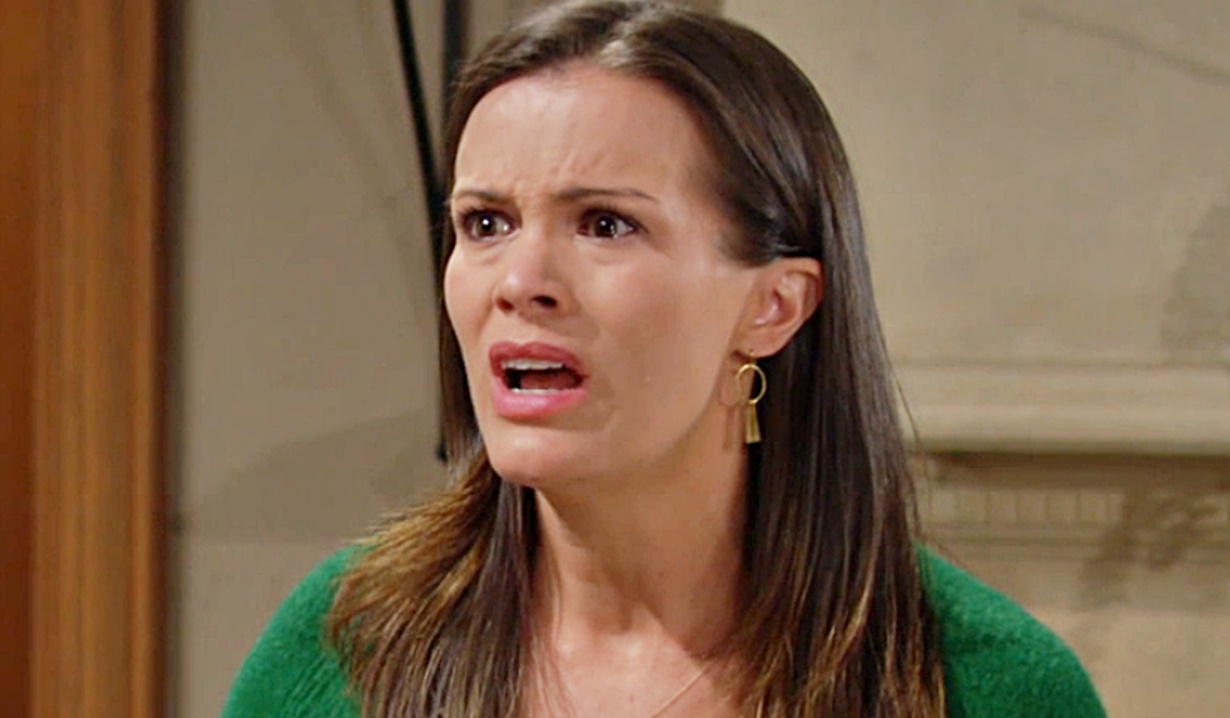 In the hospital, Adam is unconscious and ready for surgery on a table.

In the waiting area, Phyllis asks Nick how he convinced Adam to donate his kidney. Nick says it’s best she doesn’t know and asks her to leave it. Phyllis supposes Faith is all that matters. Nick replies, “This transplant has to work.

More: Courtney Hope revels in her girl-y side

In another operating room, Faith lies on a table ready for surgery.

In Faith’s empty hospital room, Rey tells Sharon he has something to take care of, and she agrees it’s wise to leave the discussion about their marriage until later. Rey asks her to call if Adam and Faith come out of surgery and he’s not back — he’s been left out of the loop lately. Sharon agrees.

In the waiting room, Nick decides he needs a minute as the surgery goes on and leaves Phyllis alone with Nikki, who encourages the redhead to go back to the hotel if she needs to. Phyllis is staying there for Nick. She asks why Victor isn’t there and Nikki wonders if she’s insinuating he doesn’t care. She reminds her he arranged for the surgeons and will be there soon. Phyllis reports that she’s keeping Noah up to speed on everything. Nikki snarks about her trying to be helpful. Phyllis goes to get coffee and Mariah arrives; she wants to be there for Faith. Nikki fills her in on Adam coming back willingly with Nick and their tornado ordeal. As Mariah worries about ‘what ifs’, Nikki reassures her. 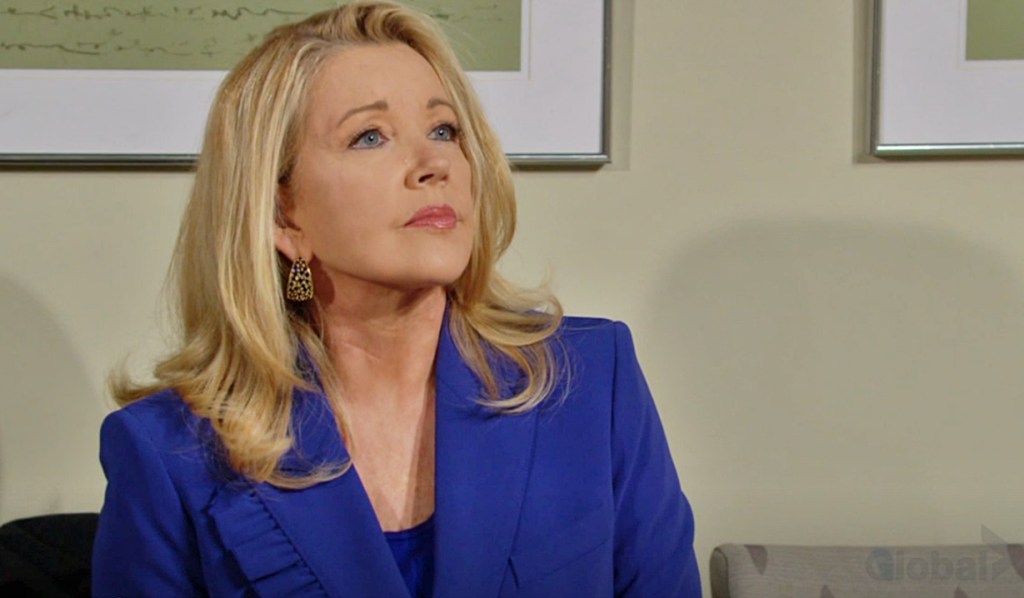 Nick joins Sharon in Faith’s room, and she updates him on Rey having to run an errand. Just then, Nate walks in. Sharon asks how the surgery went. Nate updates them that the surgeons are still hard at work but things are going smoothly so far. He reports that Adam should be in recovery soon and Faith’s operation will take longer. Once alone, Sharon and Nick agree they owe Adam a huge debt of gratitude. She asks about trying to help Adam escape and warns Rey has officers all over the place, including under-covers. She’s concerned Nick will end up in jail helping Adam get away. Nick actually had something else in mind. Sharon wants to know the plan. Nick’s hoping Adam will listen and agree to compromise. In the storm cellar he saw the goodness she always believed was in him. 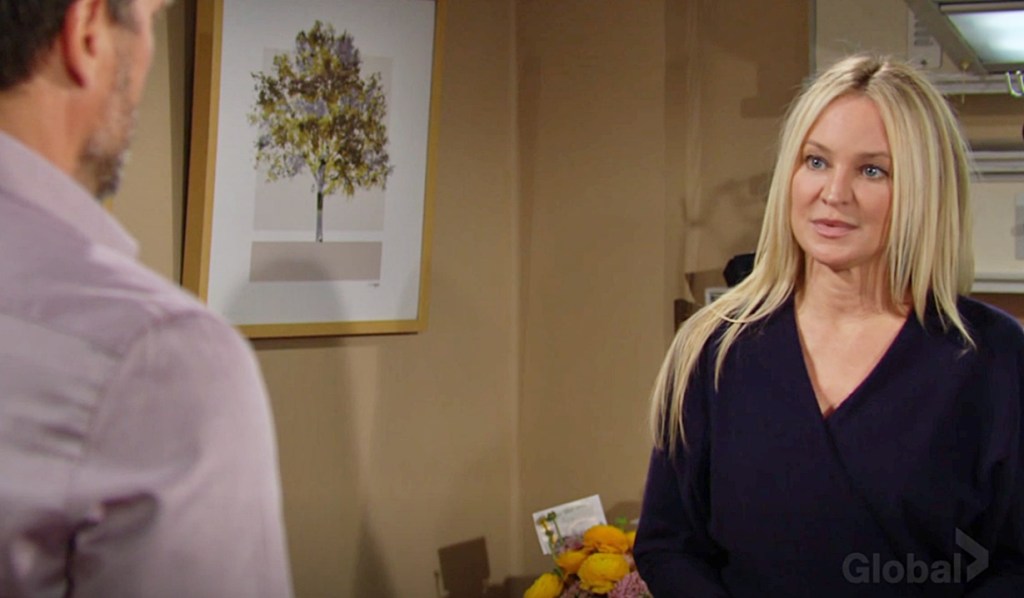 Rey arrives at the ranch, where Chelsea behaves as though she’s stunned that Victor called him and wonders if this is a trap. Appalled, she reminds Victor he told her there was a way out of this and they could all win. Victor tells Rey he was trying to convince Chelsea to come clean and may have pushed too hard. Chelsea unravels as she protests that Victor brought her son into this and claims she needs protection from him and Adam. “He hates me enough to try anything!” Rey asks why Adam hates her. Chelsea begins to tear up; “I am so, so sorry!”

Rey asks Chelsea if she’s trying to confess to something. Chelsea rambles that she didn’t know what she was doing; this isn’t her. Rey asks what she did. Chelsea sighs, throws down her cane, and stands. She insists she’s not a bad person and tells Rey they’re both victims in this, she just wanted to teach Sharon a lesson — she didn’t even have enough poison to kill anyone! Chelsea’s sorry but what she saw was enough to push anyone to the edge. She describes how she couldn’t speak or walk and Adam brought Sharon into their home. She talks about their sordid tawdry affair; stealing kisses, and sleeping together in the bed she and Adam used to share. 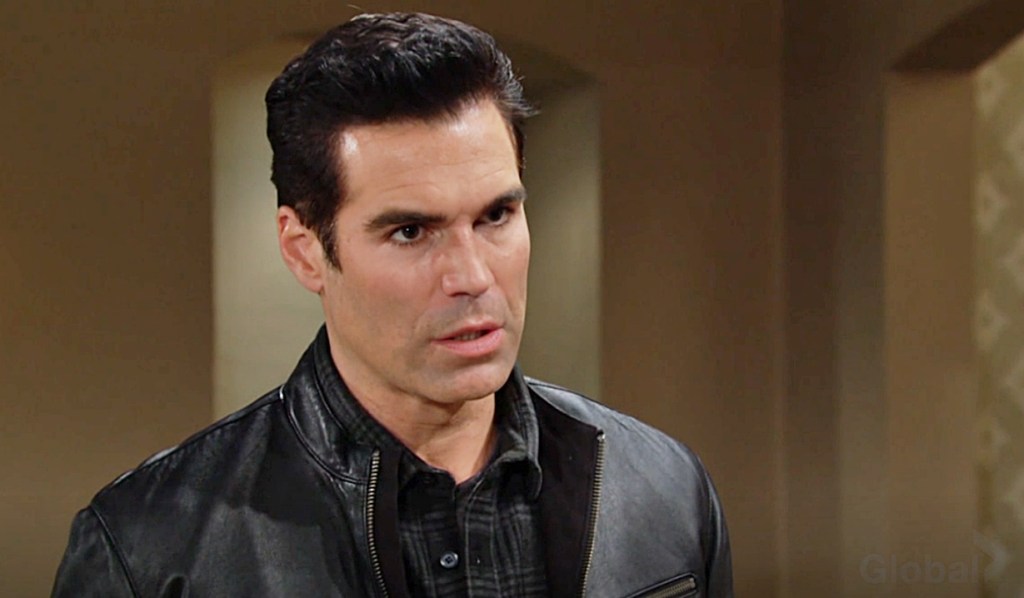 In the hospital waiting area, Phyllis rejoins Nikki and Mariah, as Nate joins Sharon and Nick in Faith’s room to tell them there were no complications. He enthuses about the transplant surgeon Victor flew in and relays it’s now a waiting game to see if Faith’s body accepts the organ. Sharon’s grateful to hear Adam is doing fine as well. Nate exits and Sharon tells Nick their little girl is a fighter. Nate makes his way to the waiting room to update the others. Nikki, Mariah, and Phyllis are so relieved. Nikki offers to let Phyllis call Noah. She will; right after she updates Summer with the good news. Nikki smiles. 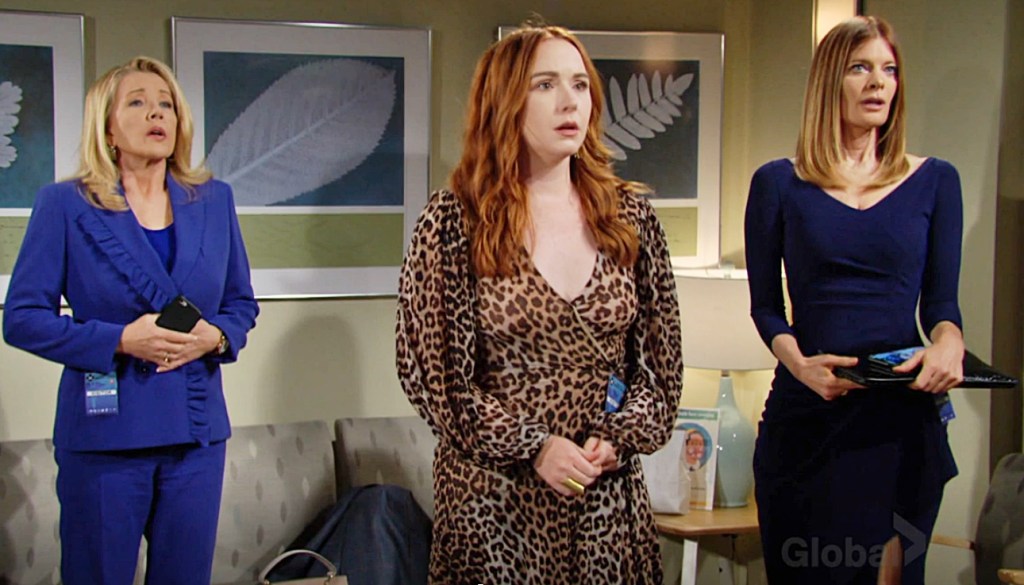 In Adam’s hospital room, he awakens and asks Nate about Faith. He explains it will be awhile before they know if her body accepts the transplant, but it went well. Adam grimaces in pain and Nate relays it will be a few days before he can leave. Adam mutters about Rey having the place surrounded by cops. Nate advises him to relax.

At the ranch, Michael arrives with a Dr. Hedges who explains he’s there to help Chelsea. She feels ambushed. Rey steps aside with Michael and relays she’s been spiraling out and confessed to the poisoning. Michael worries about arresting her in this state without a lawyer present. 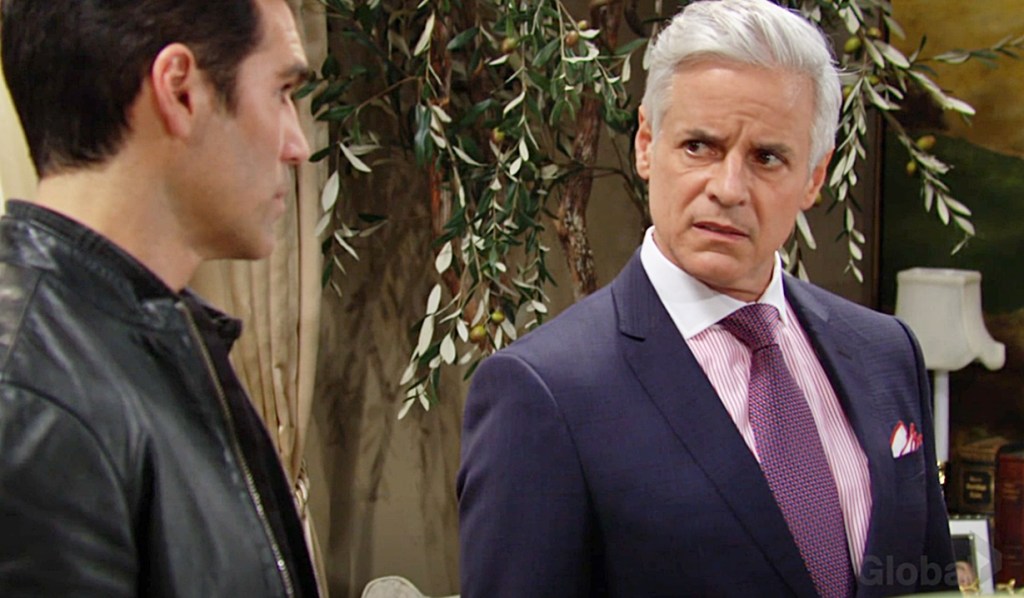 Chelsea tells the doctor that her husband betrayed her and cries that she loved him with her whole heart; she couldn’t let Sharon take him from her. Chelsea blurts that she put together the evidence to frame Adam for attempted murder. She goes on about keeping her recovery a secret and making a plan. Rey asks how she did it. Chelsea admits she took a ride-share one night to Sharon’s, picked the lock, and took the trashy little tray and figurine Adam gave her to plant them in his car. She describes going upstairs and injecting the poison into Rey’s toiletries. Michael mutters to Rey, “That information was never made public.” Chelsea gets hysterical and wails that this is Adam’s fault. The doctor intones, “It’s not fair what happened to you, Chelsea.” He wants to give her something to calm her down. Chelsea appeals to Rey, Victor, and Michael, “Don’t let him do this! Please!” 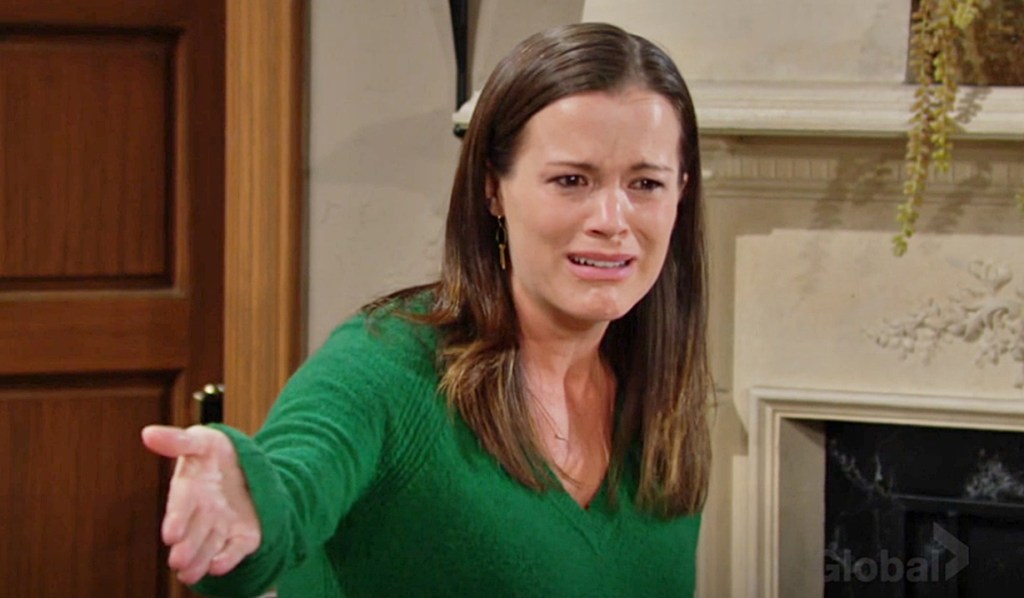 At the hospital, Nikki talks to Victoria, while Phyllis finishes up with Summer. Mariah asks how she’s doing. Phyllis says Summer’s okay and becomes emotional as she recalls waiting for good news when Summer went into anaphylactic shock there as a youngster. Mariah marvels that mothering is a tough job. Talk turns to Mariah’s pregnancy. Phyllis is sure she’ll have protective feelings for the little one. 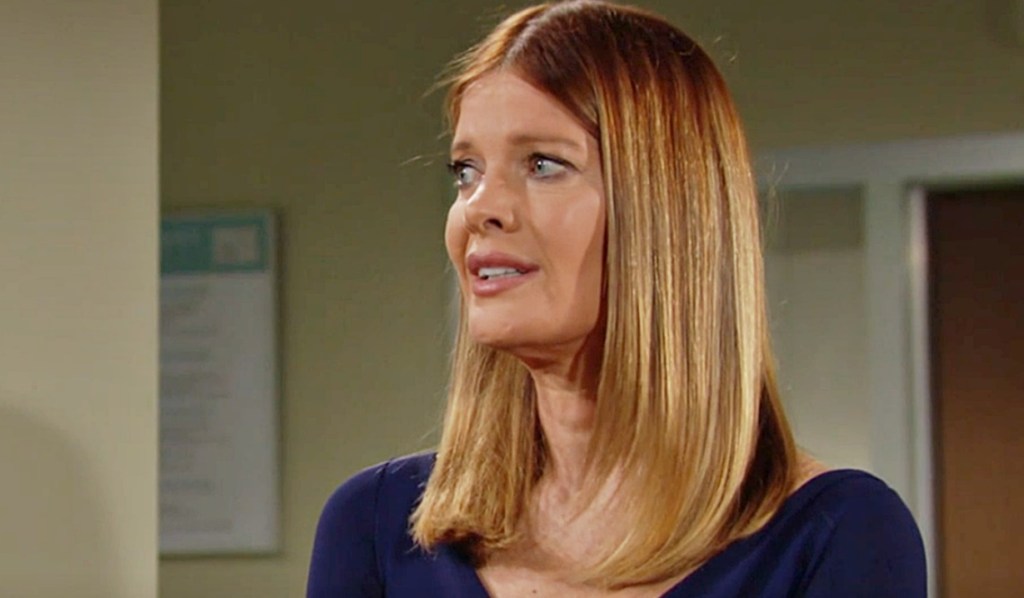 In Faith’s room, Nick and Sharon watch their daughter sleep. Sharon decides she should go and call Rey. She steps outside and leaves Rey a message but Nick calls her back in. Faith is awake. Sharon tells her everything went perfect and they confirm she has a new kidney now. She falls back to sleep. Nick exits and Mariah joins Sharon and Faith. 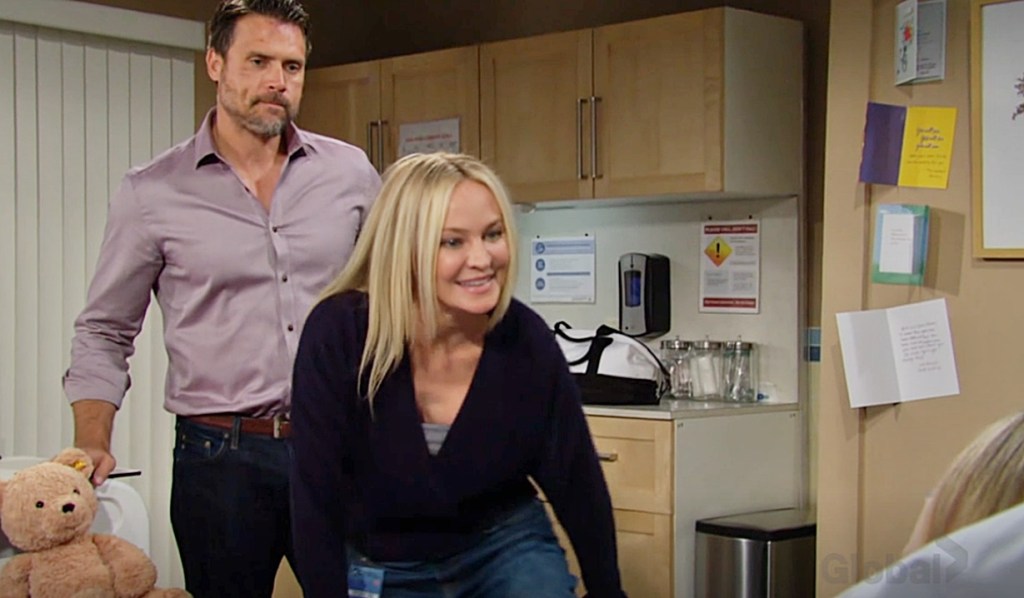 In Adam’s room, Nate tells him what he did for Faith was life-changing and he hopes it’s a second chance for both of them. He leaves, and Nick comes in. “Thank you again for my daughter’s life.” Adam asks if he’s seen Faith, and Nick tells him she opened her eyes and spoke; it seems the surgery might be a success, thanks to him doing his part. Adam wonders, “What happens next? For us?” Nick replies, “That depends on you.” 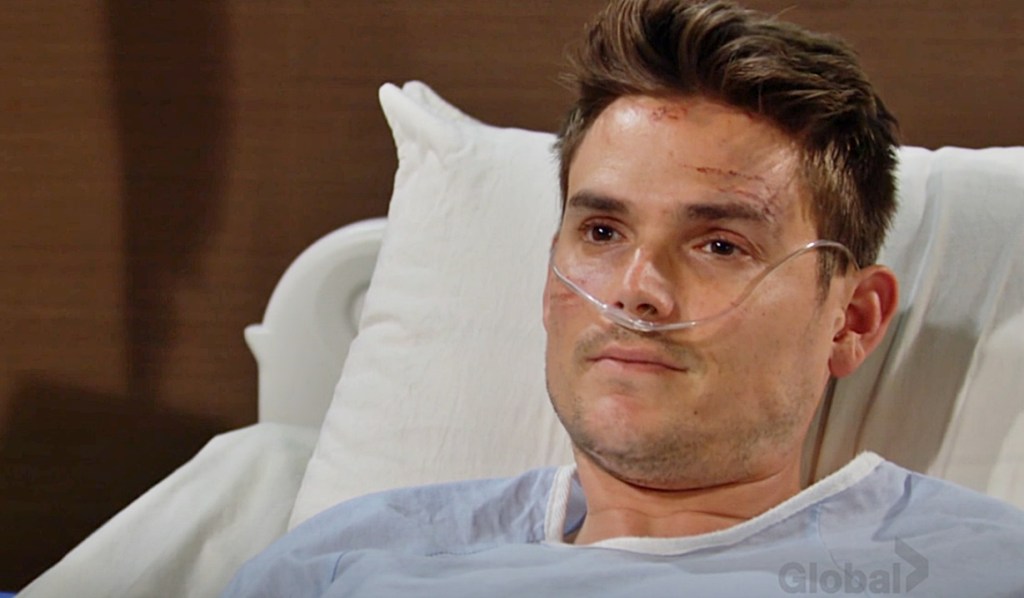 More: Nick and Adam drama hit fans in the feels

At the ranch, Rey asks if it was really necessary to sedate Chelsea, who is sleeping on the sofa. Michael asks the doctor for his diagnosis. Hedges believes she’s suffering from post-stroke psychosis and suggests she be admitted to his facility. Michael has no objections, and Victor asks if Rey will free Adam from these ridiculous accusations. Rey confirms it; since Chelsea confessed. Michael states, “Congratulations, Victor. Adam is a free man.” He exits, and Rey recaps that all the evidence pointed to Adam; he’s still shocked that Chelsea did this. The doctor reports a room has opened up for Ms. Lawson. Rey will arrange for her transfer to the facility. Victor sees Rey out, then returns and exchanges a knowing glance with the doctor. Chelsea opens her eyes and shoots Victor a terse look. He smirks. 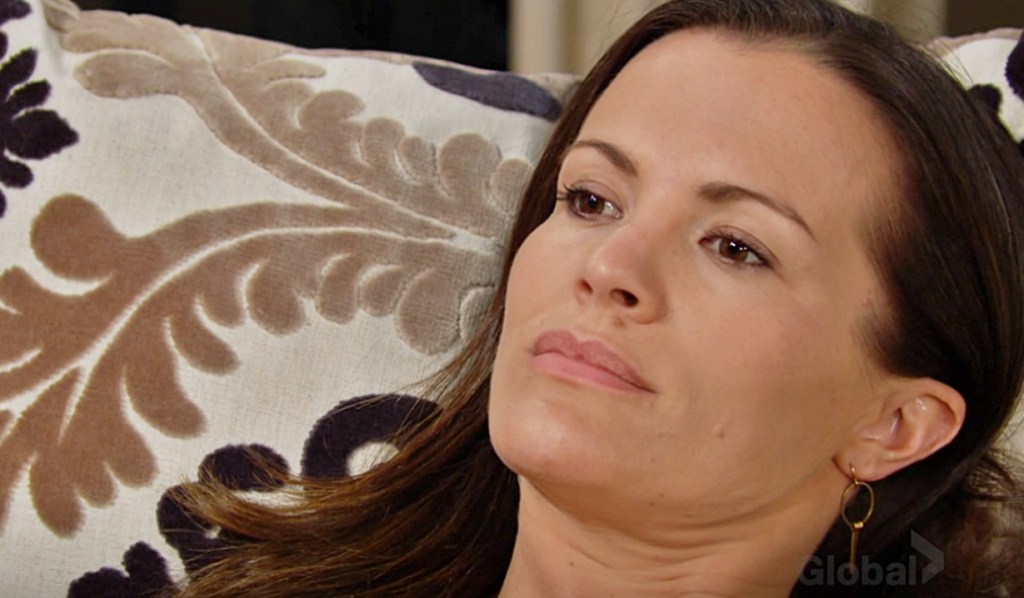 Next on The Young and the Restless: Rey becomes suspicious about Chelsea.

Look back on Chelsea’s history in Genoa City in the gallery below. Get your free daily soap-opera fix for The Young and the Restless — and all of the other daytime dramas — delivered straight to your email inbox by signing up for Soaps.com’s newsletter.

Victor Summons Rey to the Ranch...