Monday, May 10, 2021: Today on The Young and the Restless, Adam and Rey square off, Adam has a heartfelt meeting with Faith, and Devon issues a warning to Amanda. 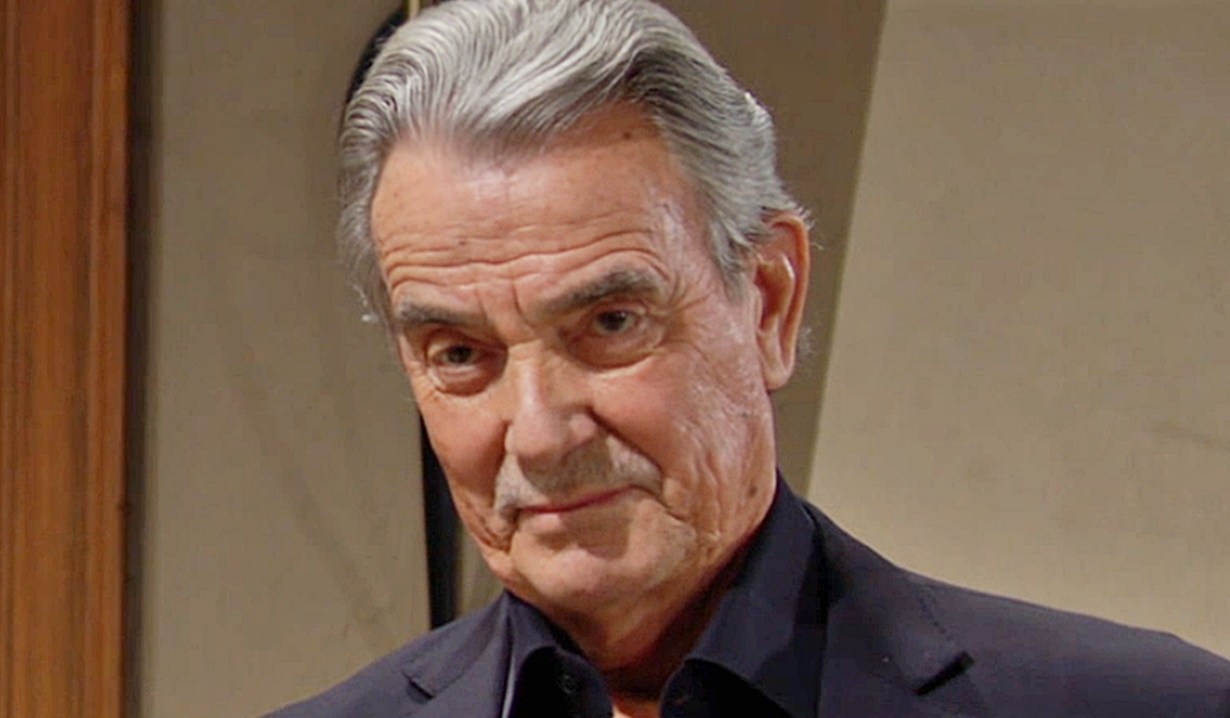 In Sharon’s living room, Rey remarks on Adam choosing this house to hide in considering what happened the last time he sneaked in there. Adam protests that he didn’t poison him — it was a jealous Chelsea who did the deed. Rey hollers that he finds that damn near impossible to believe. Adam knows he owes him an apology for kissing his wife, but Nick interjects; there’s no time to do this now. Adam reminds Rey that Sharon chose him, he needs to let it go. Rey vows to arrest Adam the minute he’s out of surgery. Adam expected nothing less. 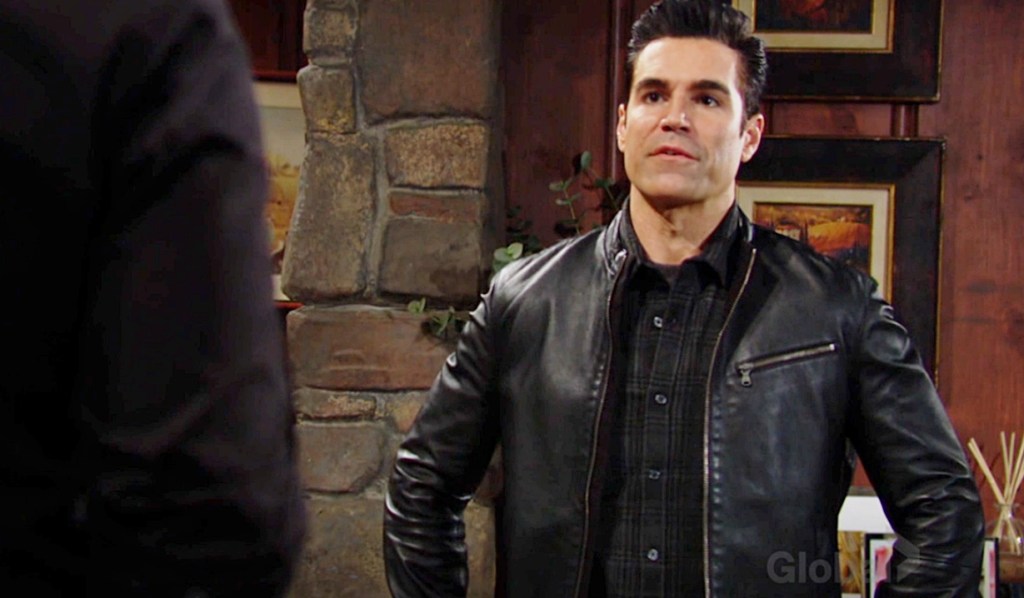 Devon’s surprised when Moses shows up at the penthouse on his lunch break. He explains that Faith’s facing a transplant and he’d like to miss a couple of classes to be there with her. Devon grants his permission.

In Amanda’s suite, she tells Sutton she enjoyed meeting the family. He hopes she understood he tabled any discussion of the case because he wanted her to feel like his granddaughter, not his lawyer. Amanda felt like part of the family. He hands over some of the family photos she saw over lunch as well as some others and she’s thrilled. Amanda learns she bears a strong resemblance to her late Great Aunt Florence. They remark on how terrific Naya’s husband, Eric, was throughout, but Sutton apologizes for Imani not showing up. She’ll come around — he won’t accept anything else. 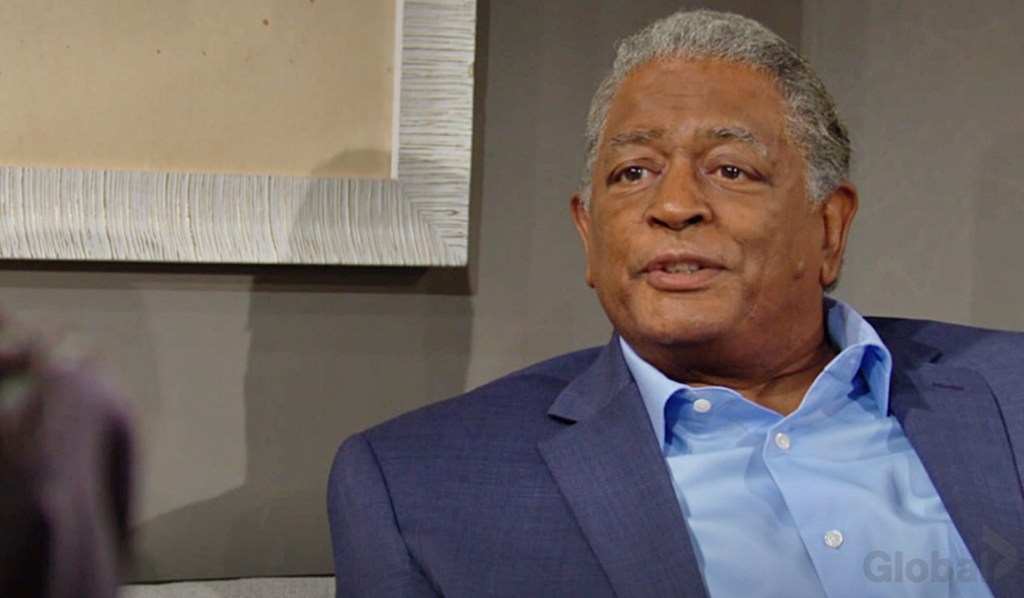 Amanda tells Sutton about Michael’s plea deal, which she turned down. Ames isn’t pleading guilty to anything. She warns they need to evaluate the evidence against them. As they go over it, Sutton claims he’s the victim of a made up scandal to get him out of the way politically. Amanda replies that may be, but they need to focus on the prosecution’s case. She needs to find out more about Richard. Sutton recalls that Naya thought he was a little self-centered. Amanda will talk to Naya about it. As they wrap up the meeting, Sutton tells his granddaughter it was nice seeing her again.

In the hospital, Sharon assures Faith that she spoke to Adam earlier and she’s positive he’ll go through with it. Rey won’t do anything until after. Nate enters with good news — Adam’s compatible. Sharon cries; “Our prayers have been answered!” After Nate goes, Faith worries about having time to write letters. Sharon asks, “Letters? You mean in case something goes wrong?” She promises Faith that Victor’s surgeon is the best and she’ll be just fine. Nick enters and teases he has a whole new batch of dad jokes from Kansas — some are extra corny. Faith’s sorry her dad had to deal with Adam, but Nick explains he’s gone up a few notches since he agreed to help her. Faith wants to talk to her uncle before the procedure. 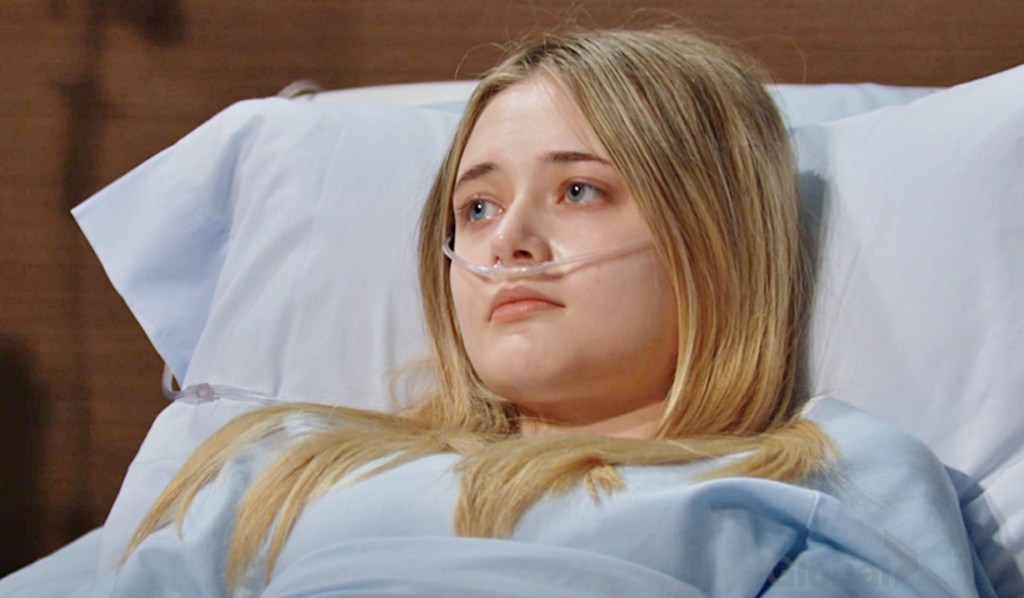 At the ranch, Victor and Nikki are relieved to learn Adam is a match. Just then, Chelsea hobbles in on her cane. Nikki informs her it’s not a good time. Victor urges Nikki to go ahead. Nikki sniffs, “Good to see you up and around,” as she exits. 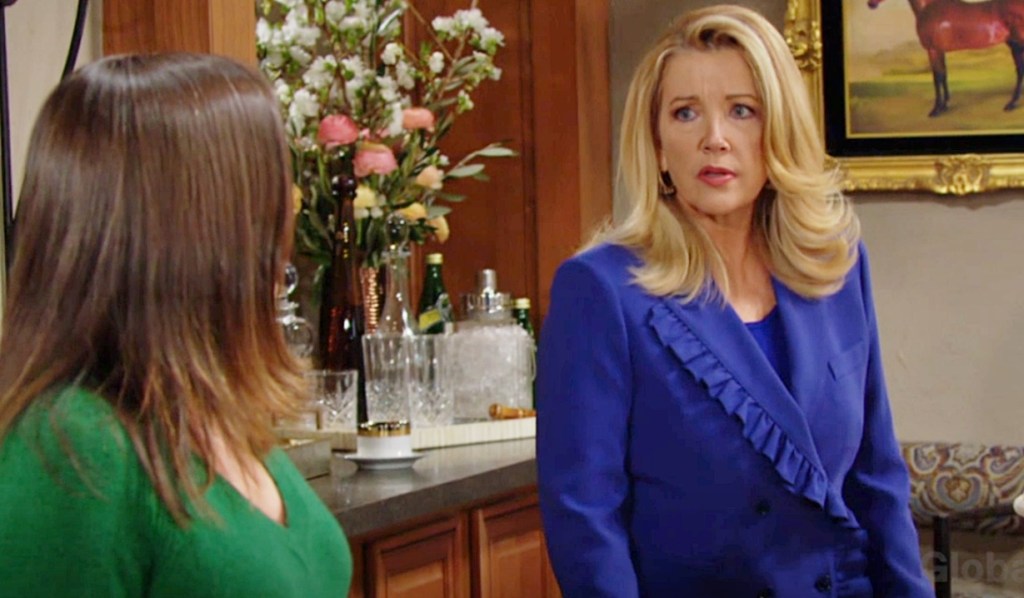 Once alone with Victor, Chelsea demands, “Where is my son?!” She rants that she can’t reach him and he hasn’t returned any of her text messages. Victor muses, “Maybe he’s busy at school.” He’s glad to know she’s taking his ultimatum seriously. Chelsea knows what he and Adam are capable of; she complains Adam had her kidnapped and drugged. Victor thinks she’s getting her payback now. Chelsea informs him she won’t confess — it’s not going to happen. She has no plans to be his scapegoat. Victor wants the truth to come out and they both know what that is — she needs to come clean. Chelsea complains she loses Connor either way; there’s no way for her to win. Victor intones, “You’re wrong. We can all win. I’ll arrange it.” He tells her it’s not whether the truth come out, but how, and hints that he’ll go after Chloe and her kids to get it. Chelsea seethes, “You bastard.” 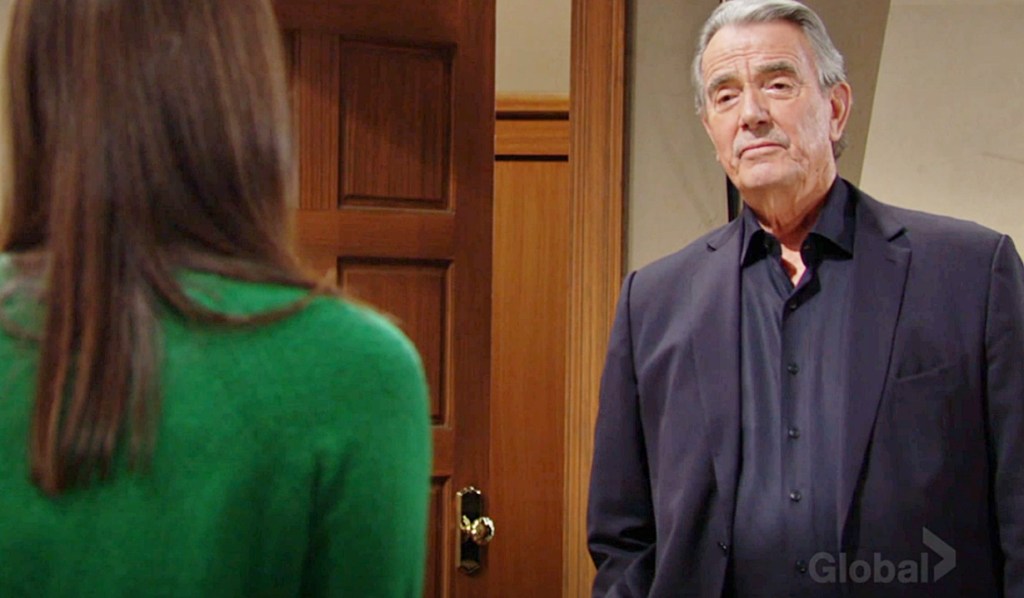 In the hospital waiting area, Adam tells Rey to relax; he’s not going to make a break for it. They snark back and forth. Adam needles that Sharon knows he’s not guilty and the trial will put them at odds again. He offers to go back on the run again and disappear the way Rey likes it. Rey says, “Not a chance.” Adam shrugs, “It was worth a try.” Sharon appears. Adam’s startled when she says Faith wants to talk to him.

In Faith’s hospital room, Nick and Sharon stand by as Faith explains to Adam that she never got a chance to thank him for bringing her there after the accident and now he’s saving her again. She really appreciates what he’s doing for her. Adam knows it doesn’t begin to make up for what he’s put her and her parents through over the years. Taking her away from them all of those years ago… he understands now how things that happen to you as a child affect your whole life. He would like it if he’d accept his gesture as an apology. Sharon cries as she listens to the heartfelt exchange and Rey watches her through the window. 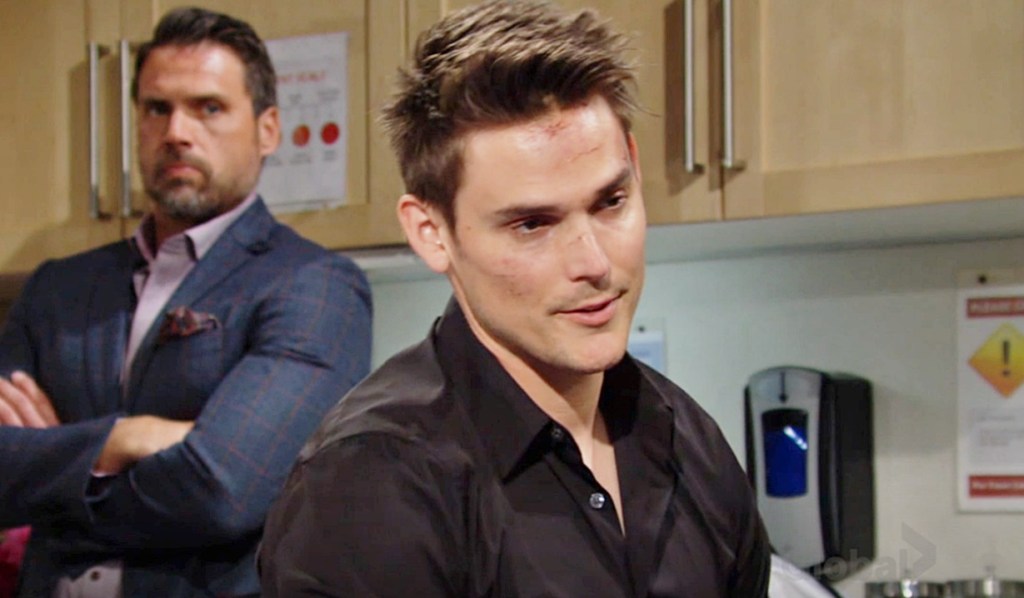 Later, in the waiting area, Nick updates Nikki that Adam spoke to Faith and is doing this for all the right reasons. She fusses over her son, who hasn’t taken time to eat.

In Faith’s room, she’s gone for prep, and Sharon thanks Rey for allowing Adam to do the surgery. Rey sighs; Faith’s health is the top priority — there will be plenty of time after the operation to take Adam into custody. Sharon rolls her eyes. Rey asks, “Were you hoping that wouldn’t happen?” Sharon reminds him he told her was starting to have doubts about his guilt. Rey argues he’s still the prime suspect. Sharon wants to know if he plans to continue their marriage once he has Adam behind bars. Rey doesn’t want to discuss it right now. 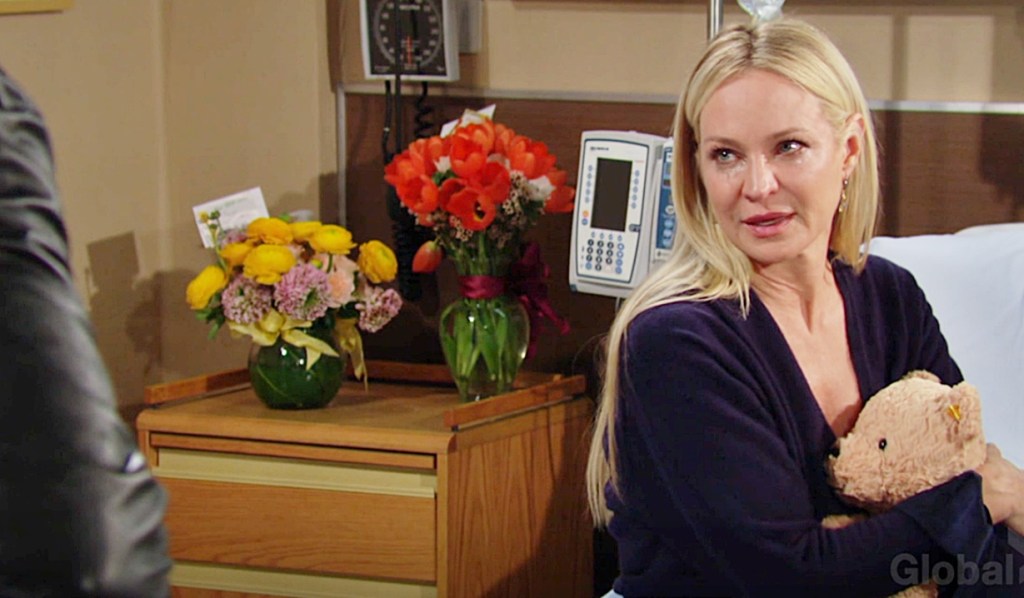 Phyllis joins Nick in the waiting area and they go over Rey having the hospital well-covered with cops. Phyllis grimaces; “Does this mean Adam’s going to stick around?” Nikki materializes with food and coolly greets Phyllis. When she walks away, Phyllis asks Nick about his leg and tries to reassure him about the transplant surgery. She asks how he got Adam to do this.

In the hotel lobby, Sutton spots Imani and chastises her for not showing up at the lunch. He asks her not to antagonize Amanda further — she’s only trying to help their family. Imani replies, “Maybe I’ll surprise you,” and heads to the elevator. Devon, who witnessed the exchange, texts Amanda to warn her.

Amanda lets Imani into her suite and is surprised when she apologizes for her past rudeness. Imani understands now that she’s genuinely trying to help. Amanda narrows her eyes, “Do you expect me to believe a word you’re saying?” Imani admits she’s earned Amanda’s scorn and skepticism. Amanda reminds her she has remained hostile throughout and boycotted the lunch — now she’s doing a complete turnaround. Imani claims her parents sat her down and shot down all her arguments about Amanda; her father was actually impressed by her. She wants to make it up to her, and offers to help with the case and to get to know one another better. Amanda will consider it. Imani will be in touch. 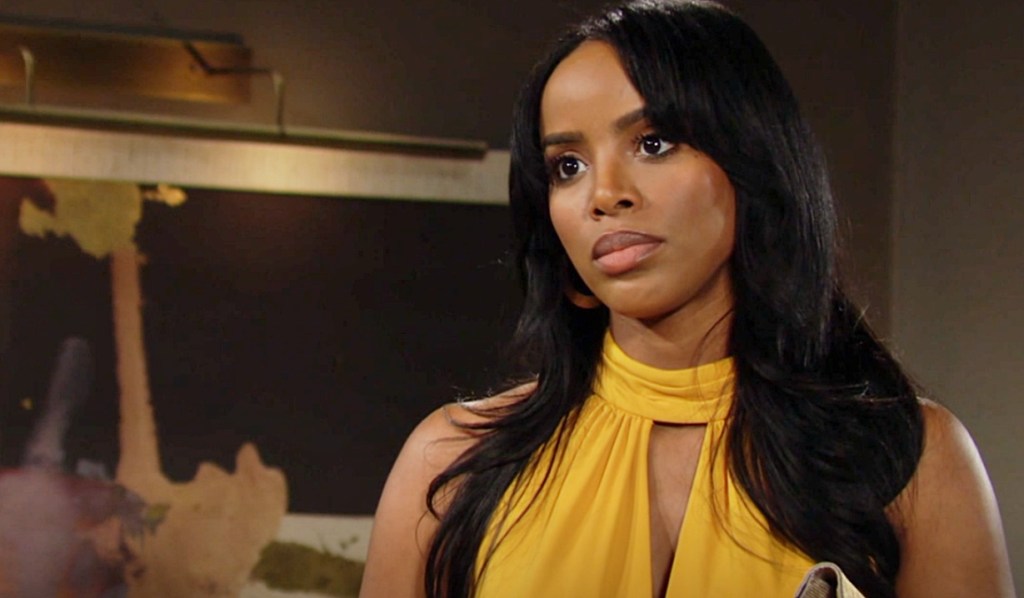 Later, Devon joins Amanda and relays that he couldn’t hear what Sutton and Imani were saying in the lobby, but their conversation seemed intense, as though they were conspiring together. Amanda fills him in on Imani doing a complete turnaround and admits she’s tempted to take her up on her offer to help so she can find out what’s she’s up to.

At the hospital, Rey takes a call from Victor, who insists he come to the ranch right now. Rey argues, but Victor points out the surgery will take hours. Rey wonders what this is all about. Victor tells him something has happened with Chelsea that will change everything.

More: Watch Chelsea break down in front of Rey

At the ranch, Victor disconnects from Rey and smiles smugly at Chelsea.

Next on The Young and the Restless: Victor sets a dangerous plan in motion.

Be sure to take a moment to look back on Chelsea’s notorious past in the gallery below. Get your free daily soap-opera fix for The Young and the Restless — and all of the other daytime dramas — delivered straight to your email inbox by signing up for Soaps.com’s newsletter.

Adam Surprises Sharon at Her House...