Wednesday, May 5, 2021: Today on The Young and the Restless, Nikki takes Sharon by surprise, Faith takes a turn for the worse, and Nick puts his trust in Adam. 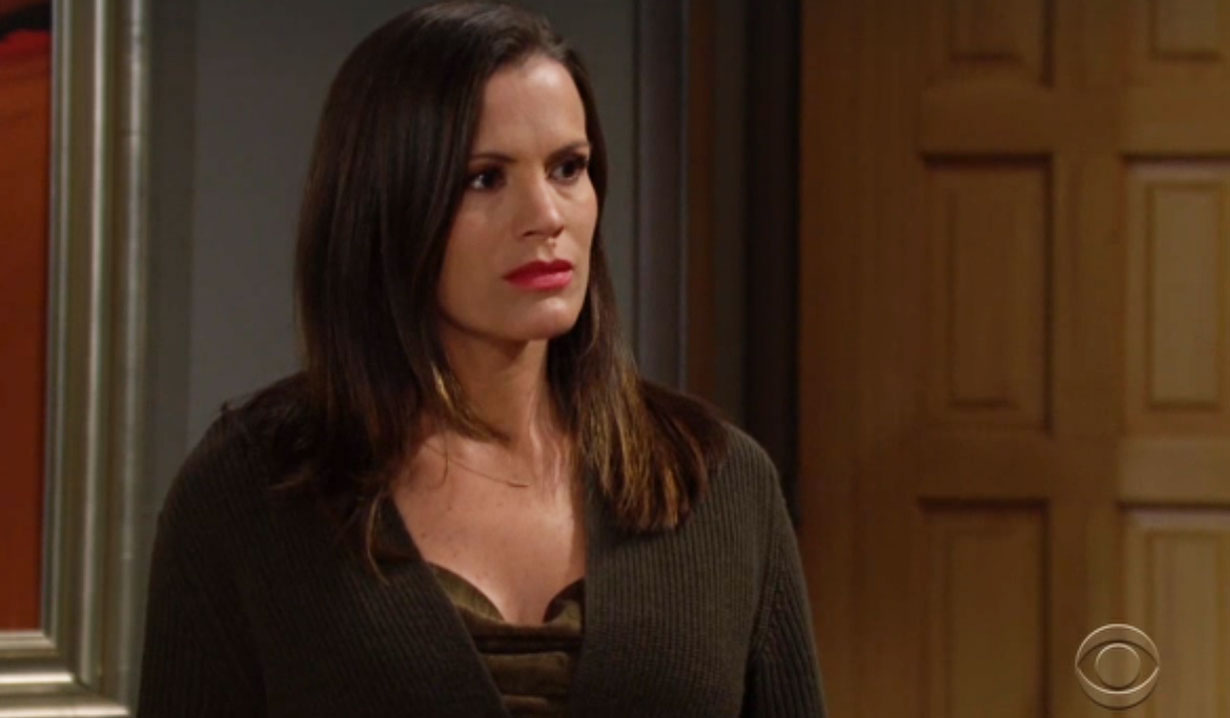 In the cellar in Kansas after the tornado, Nick crawls out, coughing, from the rubble of the ceiling and looks around. As he struggles to his feet, he calls out for Adam and begins tossing aside pieces of the ceiling. He spots Adam but he’s unconscious and covered in debris. Nick shines the flashlight on his half-brother and appeals, “Don’t you die on me now.” As he works to get to him, Nick reminds Adam he gave him his word he’d help Faith. More debris falls. Nick keeps talking until Adam comes to and gasps, “What the hell happened?” Nick reports the ceiling caved in. He’s okay but can’t get to him. Adam shouts back that he’s scraped up but his kidneys are okay if he’s wondering. 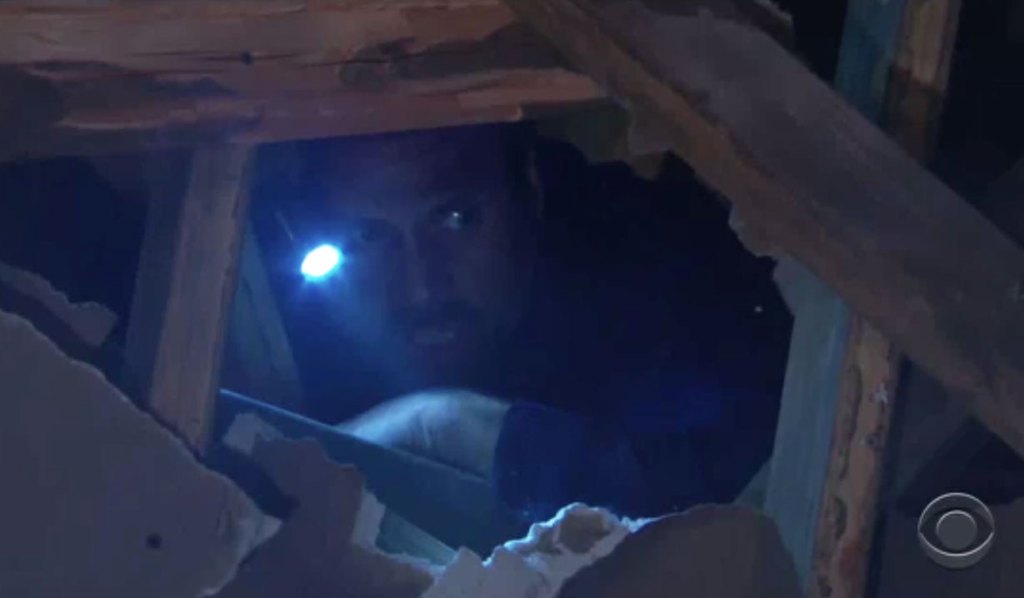 It turns out Adam’s legs are pinned by a giant tree limb. Nick urges him to use every ounce of strength to free himself so he can get out and save Faith. Nick agitates Adam until he gets his legs out. He can access the doors to outside but needs to get Nick out. His brother wants him to go ahead and help Faith, but send a rescue team. Adam reminds him he’ll be arrested if he goes to the police. He has an idea, and needles if Nick trusts him to come back. Nick reminds him of his promise and tells him, “I trust you.” 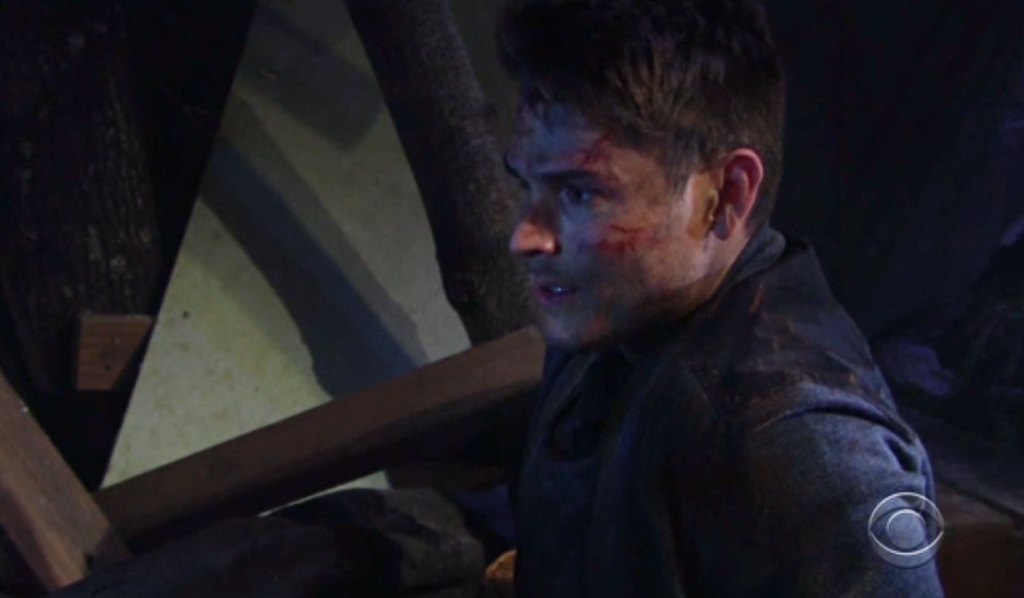 At the ranch, Victor tells someone by phone to update him on Nick and Adam. Nikki updates him that there’s no change with Faith. He informs her there’s bad news out of Kansas — a tornado hit where they believe Adam was hiding and Nicholas was on his way there. Later, Nikki watches Victor play chess against himself and reassures him about Nick and Adam. They ponder whether Adam will agree to return. Victor worries the rift between the two of them is so deep it may be insurmountable. Nikki offers that even enemies can work through their differences. She points out that they’re both devoted fathers and Nick can use that to convince Adam. Victor complains about Chelsea taking Adam’s future from him; she is the guilty party. He muses about laying a trap for the ‘queen’ and Nikki asks, “Victor… what are you going to do?” 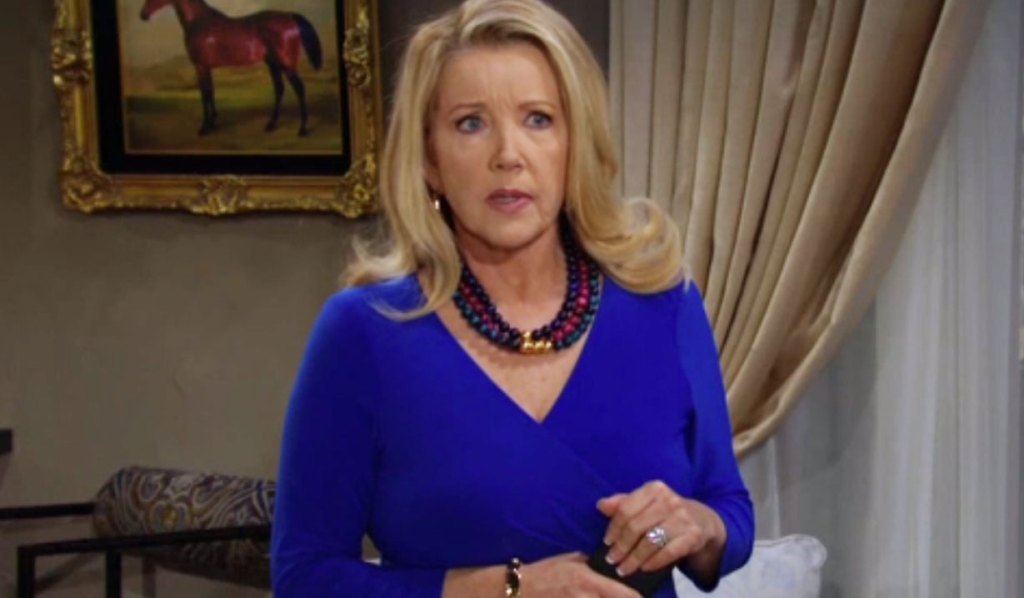 At Sharon’s place, Rey assures her he’ll pursue the truth about his poisoning, but she has dozed off on the sofa. Rey quietly heads out the door. Sharon wakes up to find he is gone, but left a supportive note. 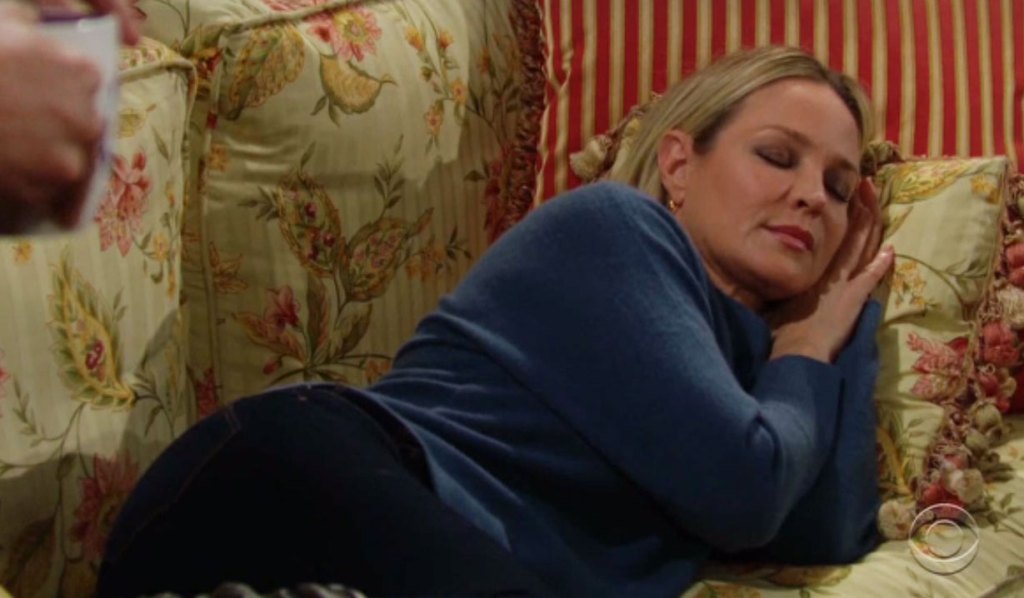 In the penthouse, Chelsea, dressed in normal clothing and with hair and make-up done grabs her purse then remembers her cane, and heads for the door. She opens it and screams as she envisions Adam standing there, but it’s Chloe, who wanted to make sure she was doing okay. Chelsea relays she’s very jumpy and needs to get out; she’s going stir crazy. Chloe’s glad she came in time to talk her out of it. It’s too risky to let the world know she’s capable of framing Adam. Chelsea wants Chloe to help her with the end stages of the plot. 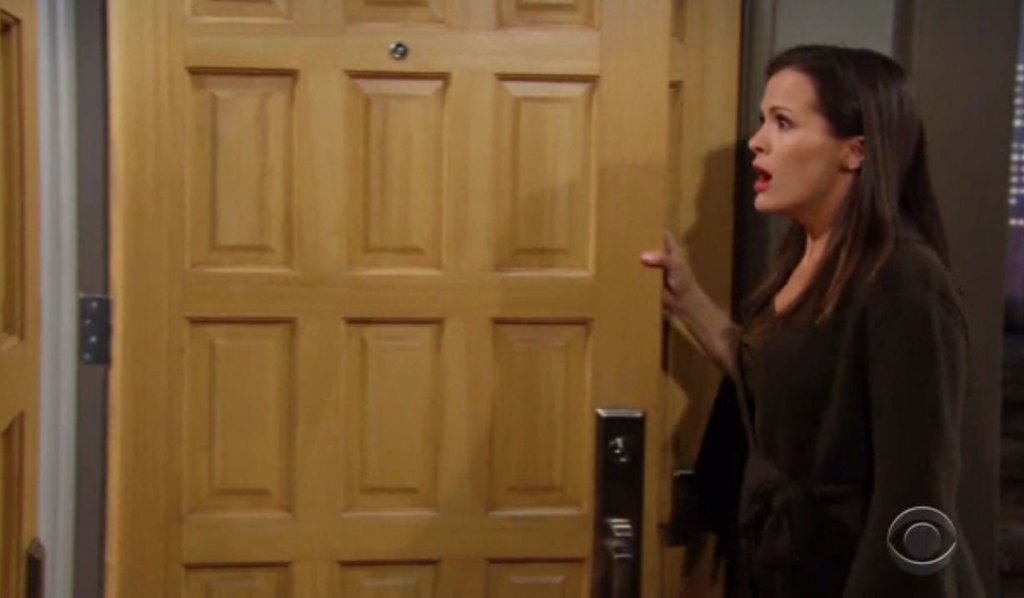 At Society, Chloe and Chelsea just get seated when Rey walks in. Chloe warns, “Now the pressure is on. Rey is here.” He approaches and muses about Chelsea no longer needing a nurse. She asks if there are any leads on Adam. He informs her they’re broadening the investigation. After, Chloe panics, but Chelsea reminds her he has no proof — as long as they don’t act suspicious they’ll be fine. 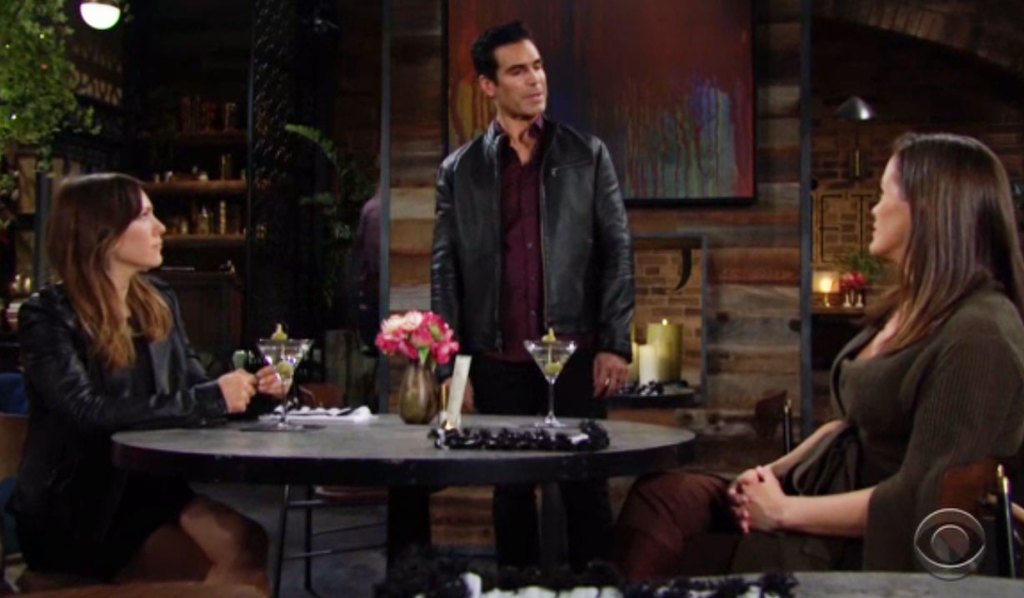 Nikki stops in at Sharon’s place and is glad she got some rest. Sharon thinks it’s nice to be on the same side after all these years. Nikki found new respect for her watching her fight cancer and be there for Faith. Sharon admires Nikki’s approach to helping Faith get through this as well. Talk turns to Nick; they’re discouraged at not hearing from him, but Nikki feels they need to remain positive. Sharon admits she’s felt alone lately and alludes to Rey being on nights, before finally confessing he moved out. She’s concerned there may be no coming back for them. Nikki recalls being there with Victor, more than once. She surprises Sharon again by saying if she to choose between her and Phyllis for Nicholas, she’d choose Sharon by a landslide. 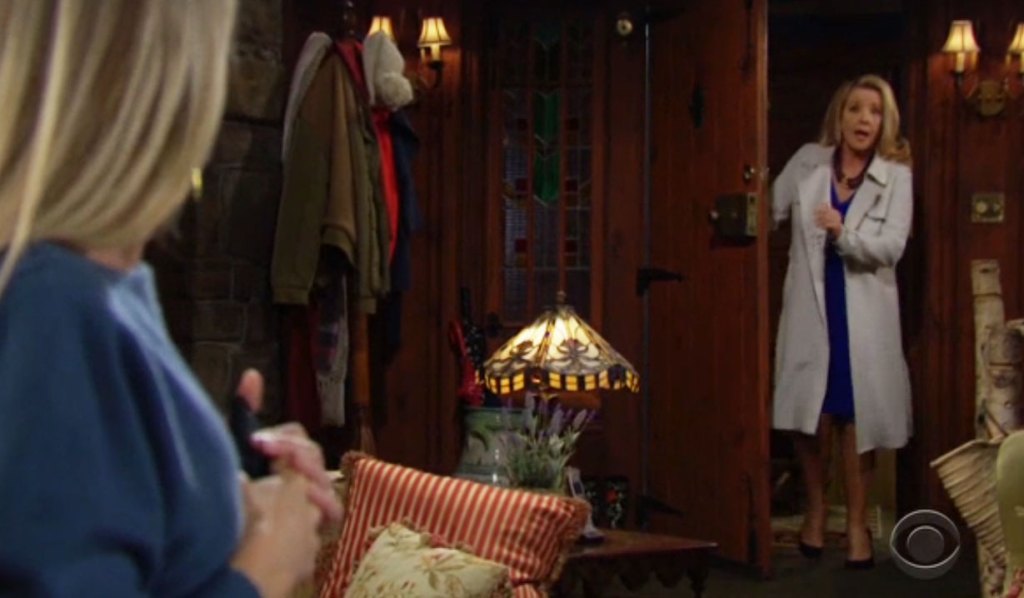 In the hospital, Faith awakens to find Moses sitting at her bedside. She asks him to stay and talk to her. He’s not going anywhere. They decide to play chess — Faith will teach him. They play and Moses makes some good moves. Faith narrows her eyes, “Are you hustling me?” He admits he knows his way around a chess board. 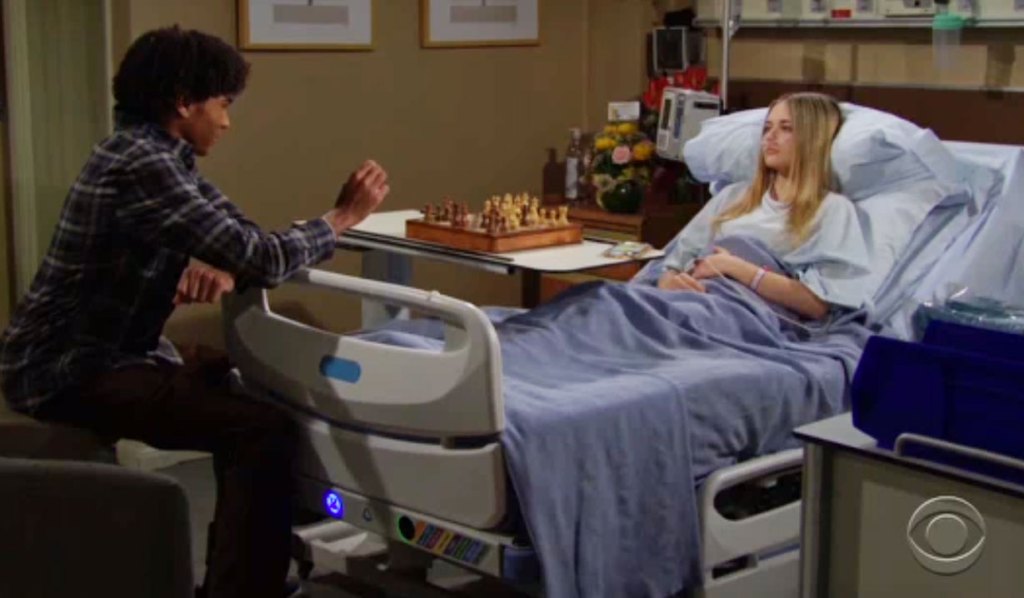 At home, Sharon calls Faith and is encouraged to hear she sounds happy since Moses is with her. She disconnects and Rey enters. She’s glad he came back. Rey has some of Lola’s soup for her. He also drove her car back from the hospital. Sharon wants to talk, but Rey has a ride share on the way and heads out, saying they can talk in the morning. Outside, he exhales.

At the hospital, Faith tells Moses she really doesn’t feel good. He runs for help. 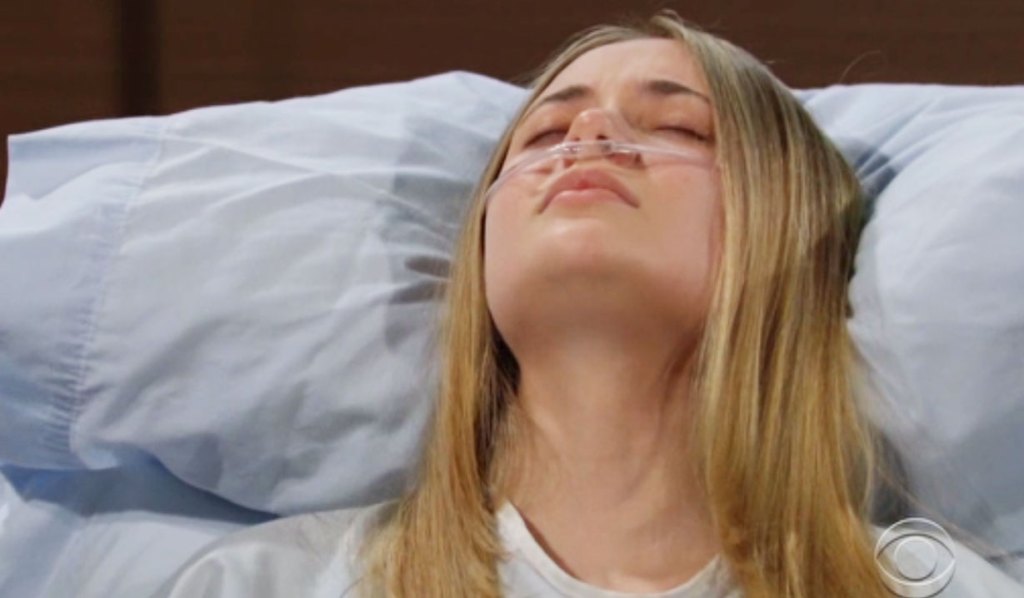 At Sharon’s place, she gets a call from the hospital, and gapes, “What?! I thought she was resting comfortably? I’m on my way!”

In the cellar, Nick has a huge gash on his leg and is struggling to maintain any strength. He hears Faith’s voice and it spurs him to stand and try to start digging out. When he stops to rest, Nick hears Faith warning that Adam’s been gone for a while now and can’t be trusted. Nick murmurs that he’ll be back; for the first time in his life he believes him. Nick thinks he’ll donate his kidney, not for him, but for her and her mom. Faith says he’s lost a lot of blood and cries, “Stay awake, daddy! Stay awake!” Nick crawls back up to his knees. 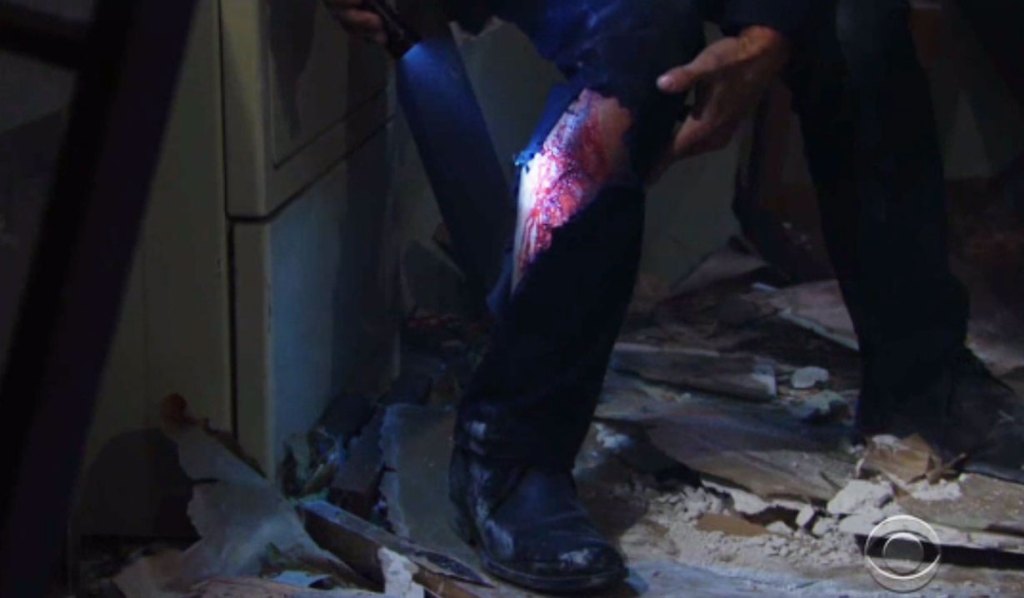 Entering the penthouse, Chelsea assures Chloe they just need to relax and everything will be fine. She turns on the light to find Victor sitting there. He mocks her for the cane, calling it a nice touch, and informs them he’s there to give Chelsea an ultimatum. Chelsea doesn’t have time for his empty threats or intimidation tactics. Victor won’t let her get away with this. He wants her to confess and clear Adam’s name. If she does that, he won’t take her son away from her. Chelsea gasps, “You wouldn’t dare.” Victor muses she’s a con and her father’s a fugitive; it wouldn’t be difficult. He advises her to think wisely and walks out. 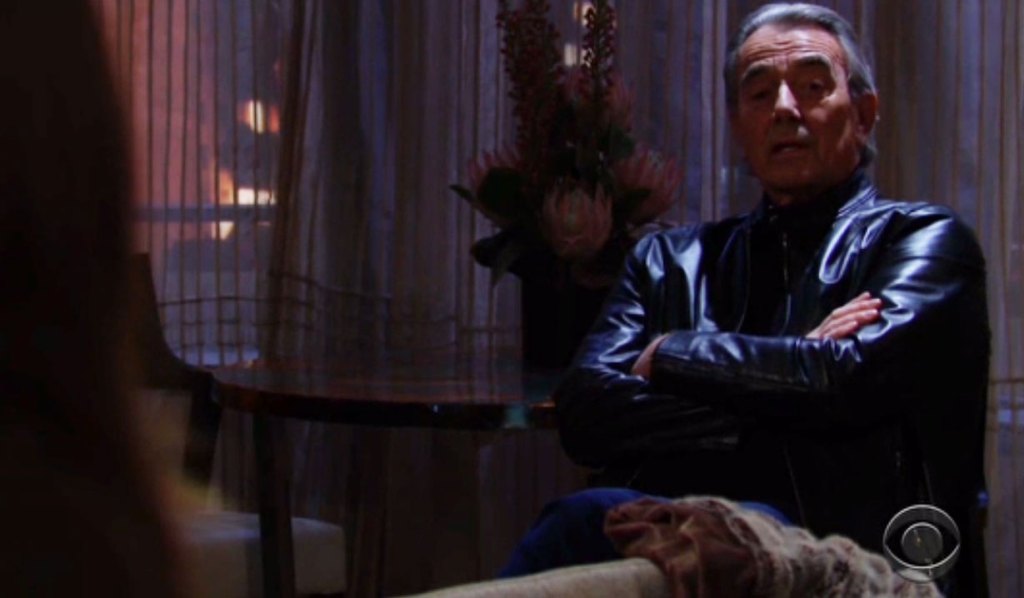 In Kansas, Nick hears sirens pulling up and Adam shouting, “He’s down here!” When Adam appears he chuckles that he went to the fire station and gave them the name Billy Abbott. Nick nods, “Solid.” Adam saw the gash in his leg and couldn’t risk him not making it. “Are you ready to go home?” Nick replies, “Yeah,” and reaches for Adam’s hand. 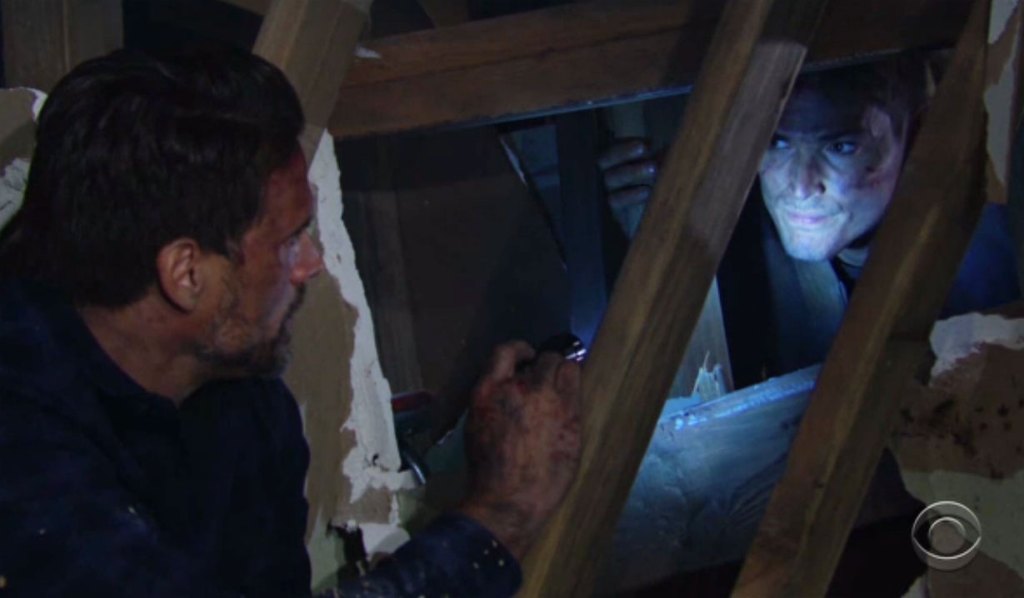 Next on The Young and the Restless: Summer retaliates against Sally.

As Chelsea contemplates Victor’s threat, look back on photos of Chelsea’s life in Genoa City in the gallery below. Get your free daily soap-opera fix for The Young and the Restless — and all of the other daytime dramas — delivered straight to your email inbox by signing up for Soaps.com’s newsletter.

Adam Makes a Heartfelt Admission to...

Amanda Receives a Warning After...