Kyle Decides to Confess to Having Sex With Tara

Wednesday, April 21, 2021: Today on The Young and the Restless, Lauren is blunt with Sally, Jack confronts Ashland, and Sharon and Rey's reconciliation attempt is derailed. 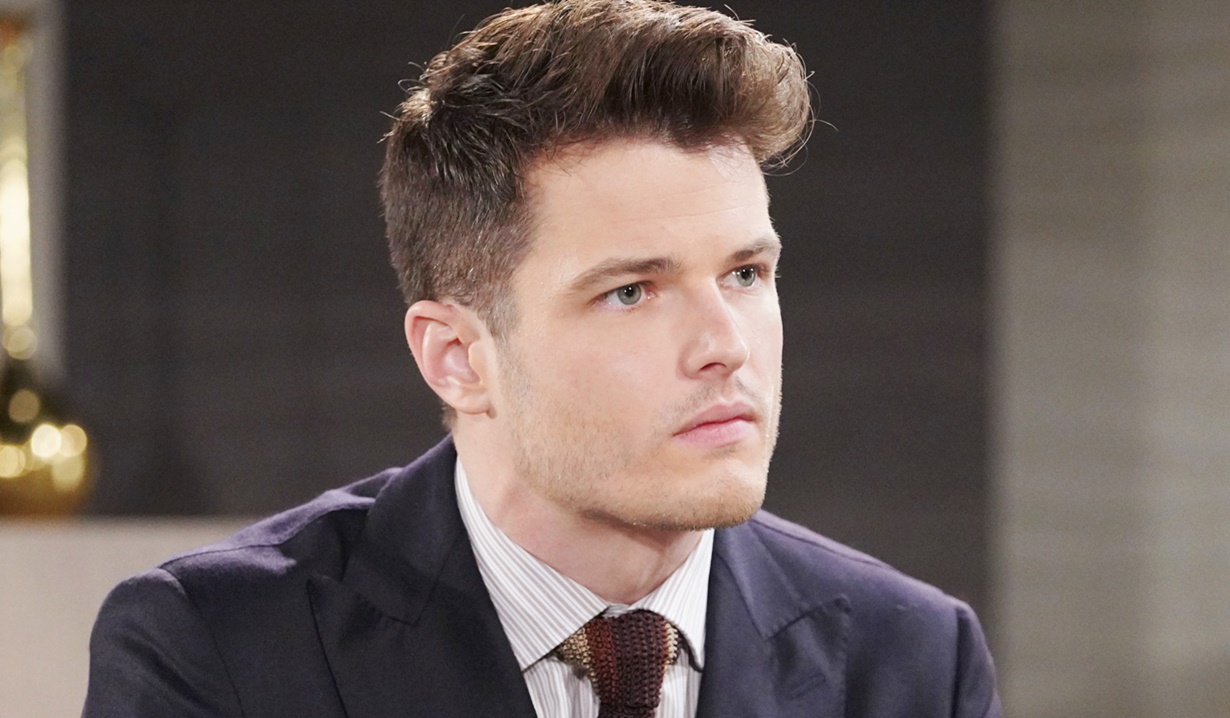 Sally enters the Jabot boardroom and tells Jack and Lauren she didn’t mean to interrupt. Jack exits briskly. Sally muses that he clearly hates her now. Lauren explains he was merely dismayed by her behavior. Sally would give anything if he would just give her another chance. “I have fallen in love with him.” Lauren questions if she’s known him long enough to have those feelings. She may have mistaken infatuation for love and has to know when it’s time to move on. Sally insists she knows the difference, but Lauren doesn’t think her deep feelings were reciprocated. “Your relationship was fun while it lasted, but now it’s over.” Once alone, Sally considers texting Jack to ask if they can talk but changes his mind. 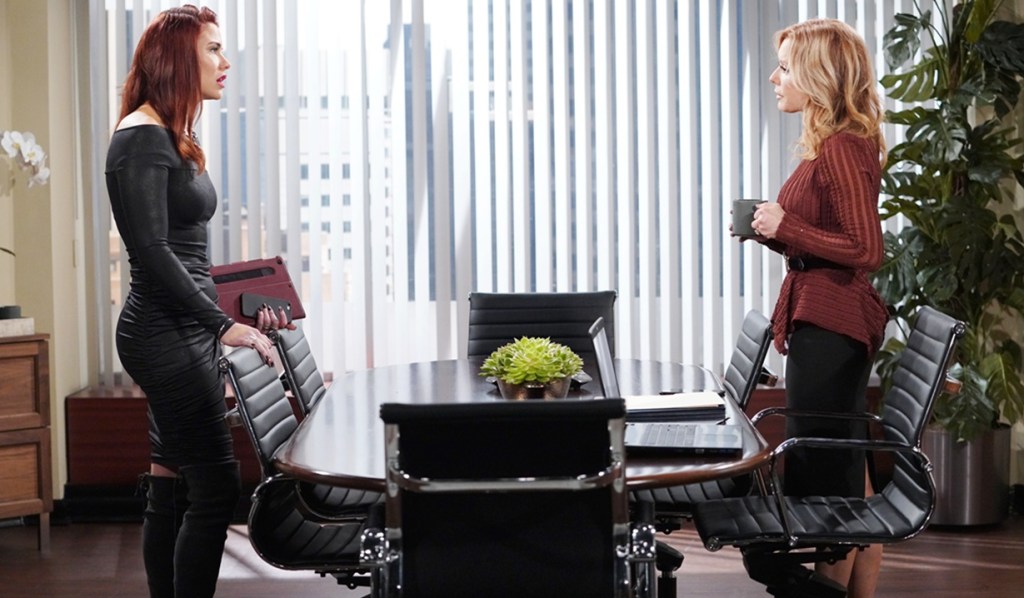 More: Why Jack and Sally needed to end

At Sharon’s place, she calls Rey to check in and learns he’s not planning on coming home anytime soon.

At Crimson Lights, Rey disconnects with Sharon as Lola joins him. He explains he and Sharon are having problems and once everything settles with Faith, he’ll be moving out. Lola ask what brought it on. He sighs, “Adam. Always Adam.” Lola asks if he’s sure he’s ready to give up on his marriage. Rey isn’t sure there’s anything left to do but walk away. He complains about Sharon running to Adam’s defense — it’s a battle he’s not going to win. Lola learns Sharon begged him to stay and thinks Rey should stay and fight for what he wants. 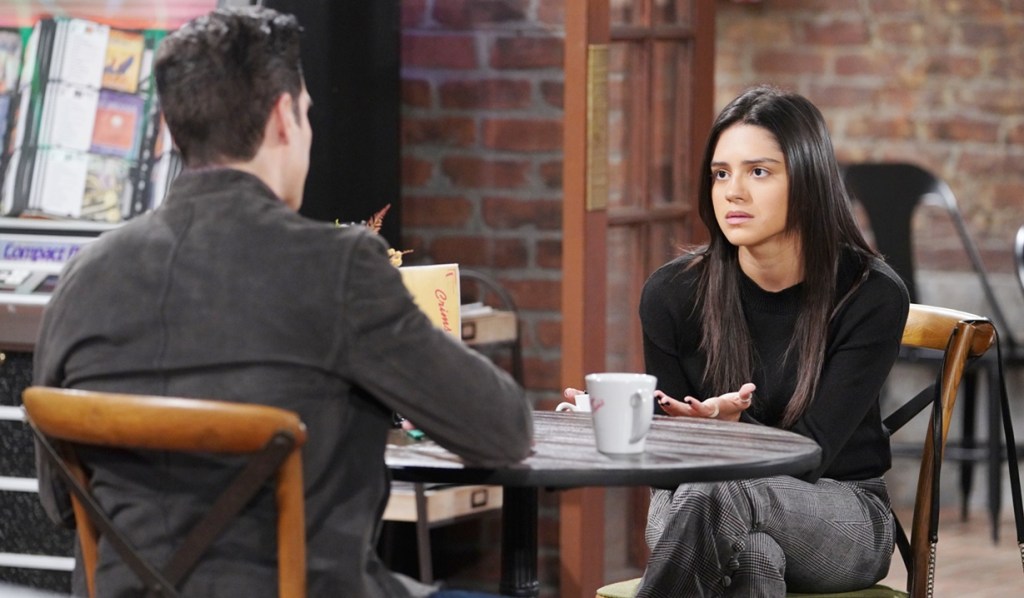 At the Chancellor Estate, Traci’s sorry to hear about Mariah’s queasiness. Mariah reassures her and relays she’s going on a work trip for Jabot. Abby worries about her flying and suggests she join the meeting by video chat. Mariah is perfectly able to do it. Abby continues to protest and then apologizes. Mariah teases her about practicing her helicopter mom skills and leaves to visit Sharon.

Once alone, Abby tells Traci she wishes Mariah didn’t have to leave. She loves getting to experience the pregnancy vicariously through her. Traci understands her wanting to be there for every little change, but she has to consider Mariah’s feelings. Abby already feels a connection to the baby. Traci assures her there will be many wonderful moments to share. Abby’s grateful her Aunt Traci is part of her life. 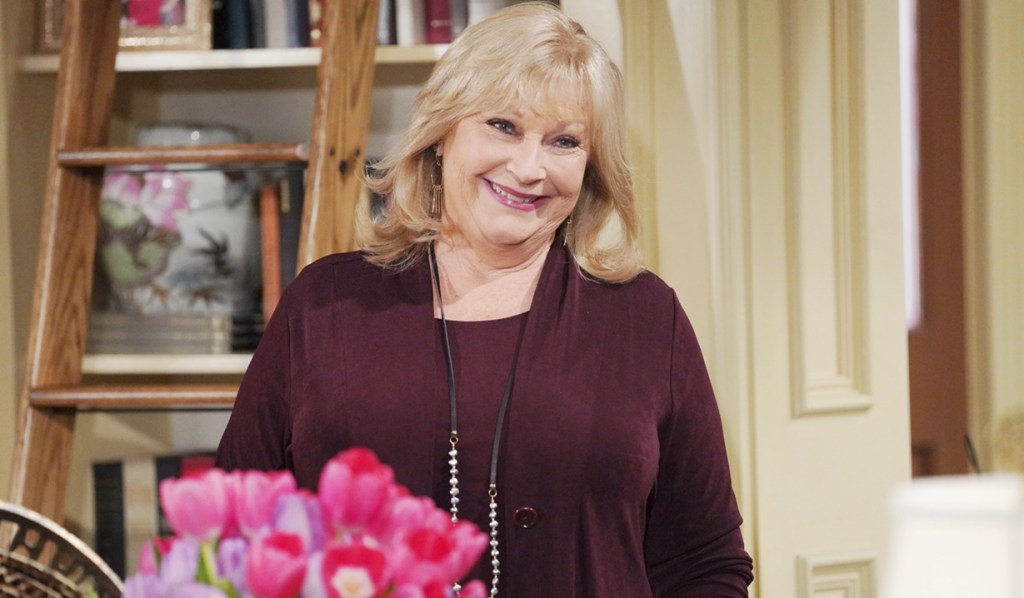 In the hotel lobby, Kyle asks Tara what she’s doing there. She came looking for Ashland since he’s not returning her calls and asks what happened between them. Kyle urges her to follow him up to his room to discuss this privately.

In Kyle’s room, Tara laments the turmoil since Kyle came back into her life. Kyle tells her Ashland accused him of sleeping with her and he tried to laugh it off. He asks what Ashland said during their fight. Tara says he alluded to being disappointed and then turned cold. When he turns calculating is when he’s the most dangerous. Kyle complains he’s messing with Jabot and Tara’s not surprised. Suddenly, Summer enters and asks, “What’s going on here?” They bring her up to speed. Kyle asks Tara if he should be concerned about her or Harrison. Tara can look after herself and her son and warns Kyle to watch out for himself… and to stay away from her husband. 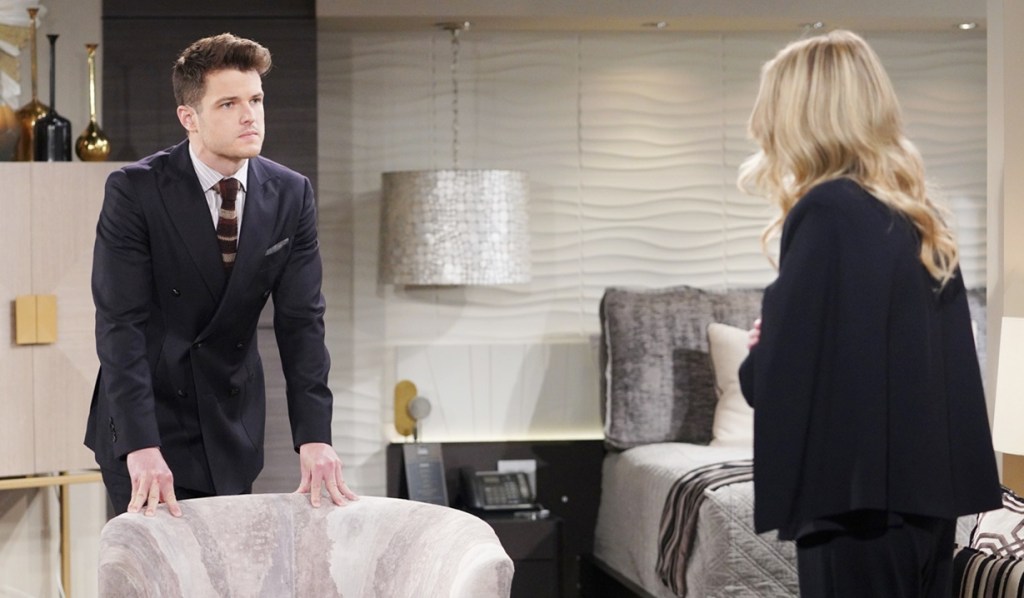 After Tara exits, Kyle explains to Summer why he brought Tara up to the room. She tells him she saw Ashland heading into Society and reminds Kyle he’s still running on suspicion and instinct. Kyle thinks it’s time to face the guy head on and tell the guy to direct his anger at him and only him. Summer argues he needs to avoid him until they find out what he knows. If he confesses to the affair it will lead to questions about the timing and Harrison. This could affect his son.

Kyle tells Summer he needs to do something. Summer tries again to talk him out of coming clean and questions what, if anything, would satisfy this guy. Kyle decides he’ll offer to walk away from Jabot if he’ll leave the company and everyone else alone. Summer suggests they make a grand engagement announcement instead. Kyle doesn’t think that’s the answer to their problems. He knows what he has to do. Summer calls after him as she walks out.

Jack spots Ashland at Society and asks him about backing out of doing business with Jabot. “Is it something we said?” Ashland reveals it’s something he did — or rather, something his son Kyle did. Jack plays dumb, but Ashland calls him out — he knows what he’s talking about. Jack swerves to ask if Ashland knows anything about the vicious rumors circulating about Jabot. Ashland feigns innocence and asks if there’s any truth to them. Jack defends his company; the fabrications seem designed to make Jabot seem vulnerable, perhaps to an outside attack. Ashland wonders if he thinks this is about revenge. Jack counters, “You tell me?” 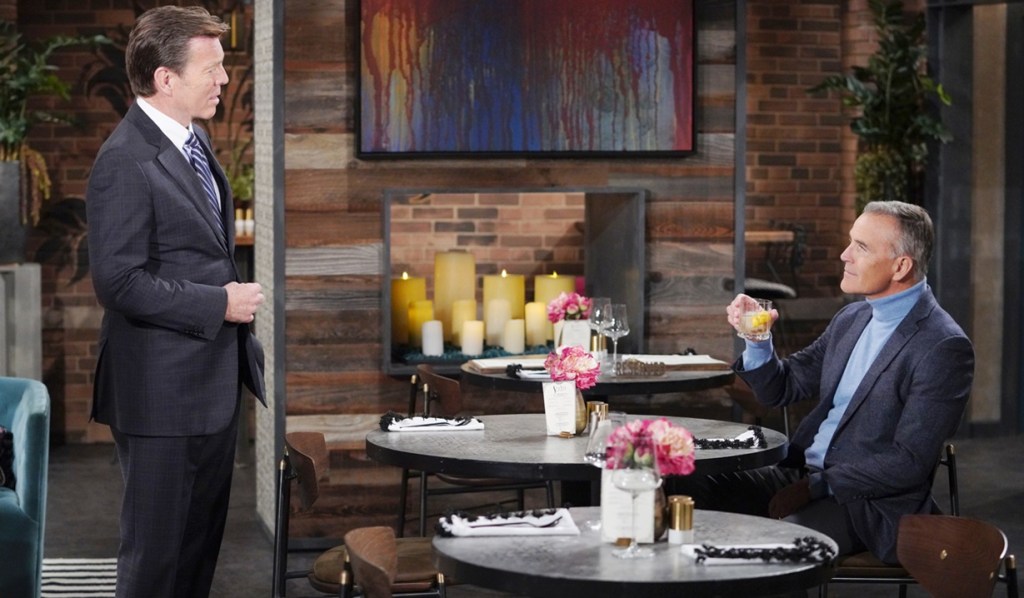 At Sharon’s place, Mariah reveals she’s headed out of town for work and kind of needs a break from being the center of attention. Talk turns to Faith. Sharon says she did great in court and has returned to school. Mariah asks if Adam’s still on the loose. Sharon confirms he is and admits she and Rey have been arguing over it. “I may have already lost him.” Mariah’s dismayed to hear he plans to move out. Sharon explains she found out where Adam was hiding and kept it from Rey longer than she should have. Mariah understands why she went to Adam; he saved Faith. But she also gets why Rey feels betrayed. Sharon’s worried it’s too late for her marriage, but Mariah urges her to keep trying. 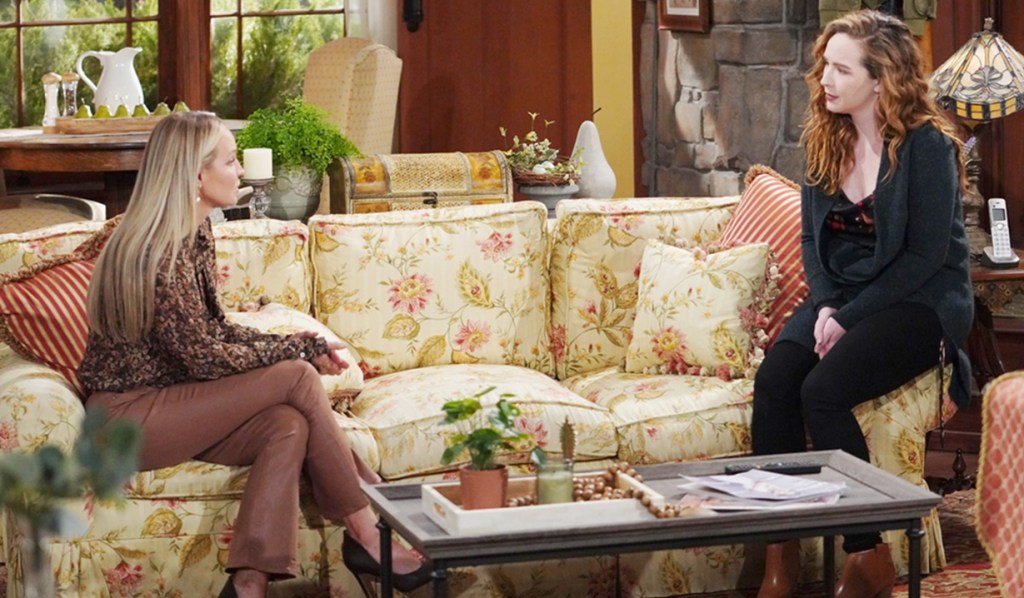 Mariah catches up with Lola at Crimson Lights and they compare notes on Sharon and Rey. They agree they only have the one problem. Mariah knows Adam is a massive hurdle, but believes they still love each other. She wonders if they can put their heads together and find a way to help them out.

More: Who will replace Mishael Morgan as Amanda

Rey arrives at home, where Sharon’s pleased to see him. He reveals he told Lola what’s going on with them; she hoped they would work things out. Sharon shares that Mariah felt the same way. Rey wishes they could but Adam’s been the third person in their relationship for too long. Sharon asks him to listen to what she has to say. She talks about what she can see in their future and suggests they could buy a vacation home for the two of them. It’s the only life she sees for herself, but it doesn’t work without him.

Just then, Sharon’s phone rings. Rey tells her to go ahead and answer it. She does, and her expression changes. Rey asks if it’s Adam. She nods. Rey asks her to give him the phone and warns Adam he will find him. After disconnecting, Rey fumes about Adam interfering between them yet again. “It never ends. I can’t go through this anymore. I can’t stay her any longer.” Sharon asks, “You want to go? Right now; forever?” Rey only knows he can’t stay there tonight.

In the hotel lobby, Tara spots Kyle walking out and follows him.

In the suite, Summer calls Jack and leaves him a voicemail warning that Kyle’s about to do something foolish and she couldn’t stop him. She’s hoping he can.

At Society, Jack promises Ashland he’ll find the source of the rumors. Locke wishes him all the luck in the world. Just then, Kyle storms in and tells Ashland it’s time they had a real conversation. Behind him, Tara watches in horror.

Next on The Young and the Restless: Victor shares a secret with Nikki.

Look back on photos of Peter Bergman as Jack Abbott in the gallery below. Get your free daily soap-opera fix for The Young and the Restless — and all of the other daytime dramas — delivered straight to your email inbox by signing up for Soaps.com’s newsletter. 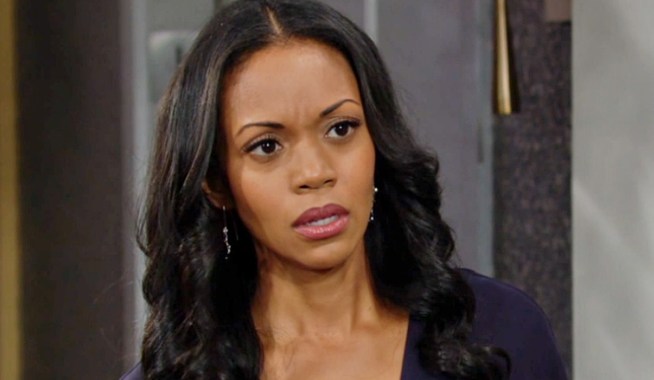 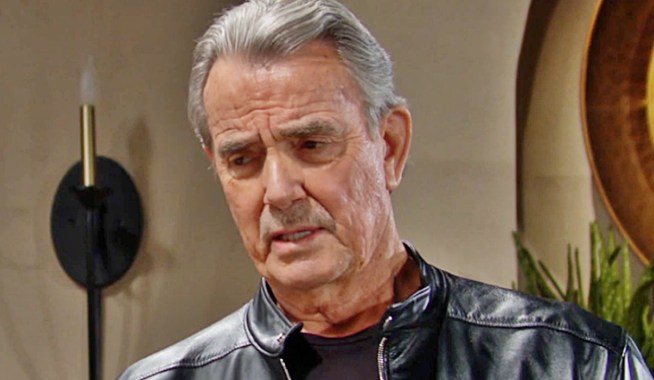