Sally Vows Revenge on Phyllis — Who Invites Her to ‘Bring It’

Thursday, April 15, 2021: Today on The Young and the Restless, Kyle and Summer make plans, Chelsea panics, and Rey and Adam each make momentous decisions. 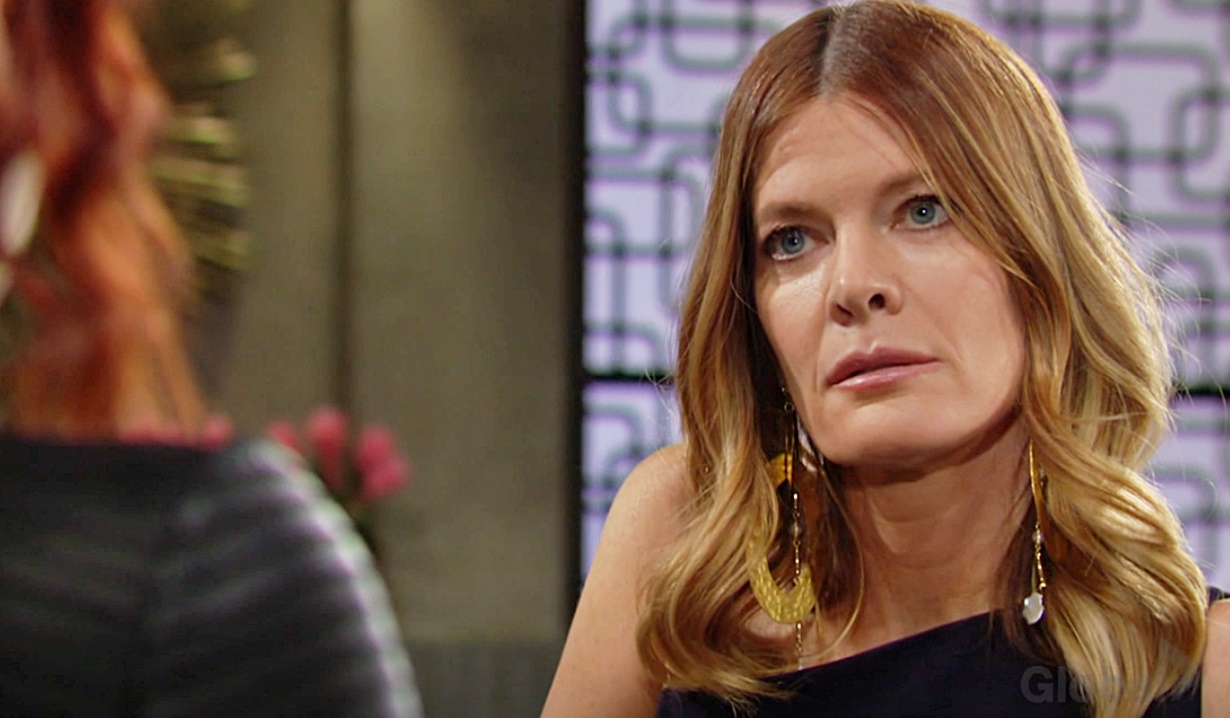 In her suite at the hotel, Summer tosses and turns in bed then jumps as Kyle comes in. He asks about her bad dream. She explains, “You left me to be with her.” Summer laments that it was heartbreaking, though she doesn’t believe he’d actually do it. Kyle assures her Tara is the past and that whatever Ashland has in store for them he won’t leave her. He thinks they should do something about their commitment. “I want to be married. Let’s set a wedding date. The sooner the better.” Summer loves the idea and they decide it will be fun to plan. She thinks they should rehearse for their wedding night and starts disrobing. Kyle joins in, “Anything for my bride.” 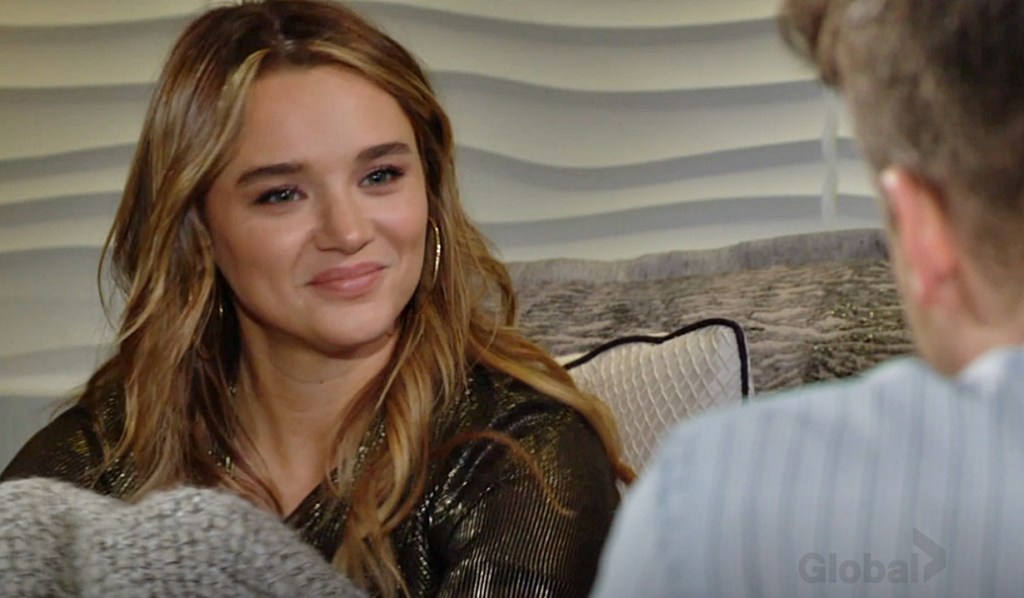 More: Is Ashland really the biggest threat to Skyle?

At Society, Sally texts her sister, Coco, that everything was so great until Phyllis ruined it all. Gloria appears, invites herself to join Sally, and wonders what’s wrong with her. She asks if she screwed up at work or if it has to do with Jack. Sally reveals they’re over. Glo says, “Next round’s on me.” 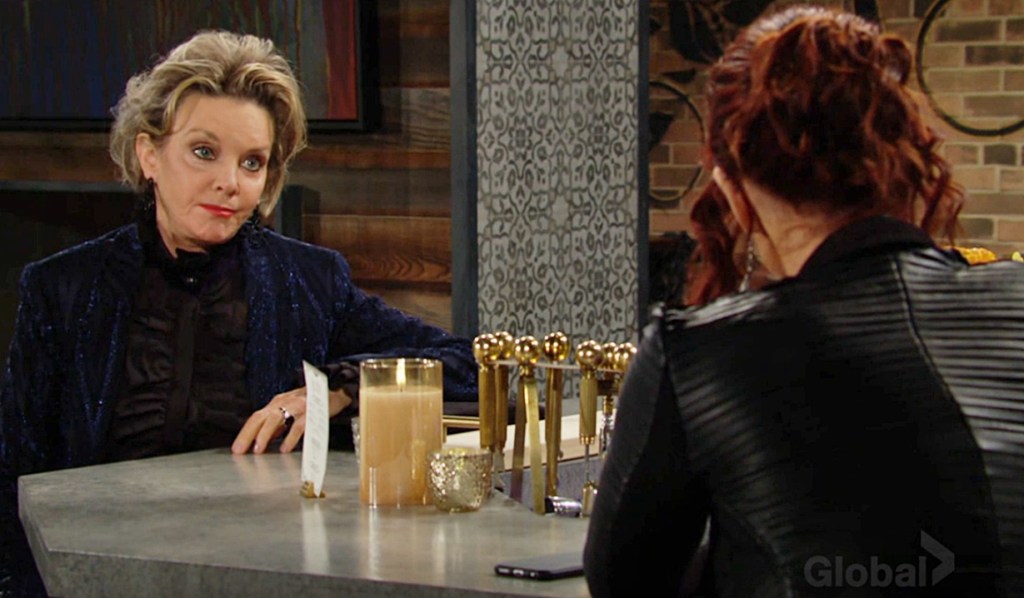 Gloria learns that Sally let Jack down. Sally insists people have the wrong idea about her; they thought she was a golddigger. Glo knows the money was part of the appeal. Sally admits Jack’s handsome, powerful and wealthy, but she really cared about him. Glo muses that people never believed her either when she claimed she only wanted happiness for Jack. Sally thinks he’s lucky to have a force of nature like Glo looking out for him. Gloria assures Sally that Jack has an amazing capacity for forgiveness. “He might come around.” Sally’s doubtful. Glo thought she was tougher than that and huffs off to go to bed.

More: Why Jack and Sally needed to end

In the hotel lobby, Jack confronts Phyllis about all the manipulating she’s been doing behind his back with Sally. Phyllis states she was a threat to her daughter and his son, and adds, “I’m glad you saw her for who she is.” Jack knows Phyllis was looking out for his best interests, but he’s sad. She’s not glad about that, but she’s happy Sally’s in his rearview mirror. Phyllis think it’s the universe’s way of protecting him. Jack rebuts that the universe wasn’t protecting him; Phyllis was. She supposes maybe she was put on earth to look out for him. Phyllis tells Jack that no one deserves love more than he does and offers to vet his women for him. Jack will look after it on his own, but thanks her for the pep talk. 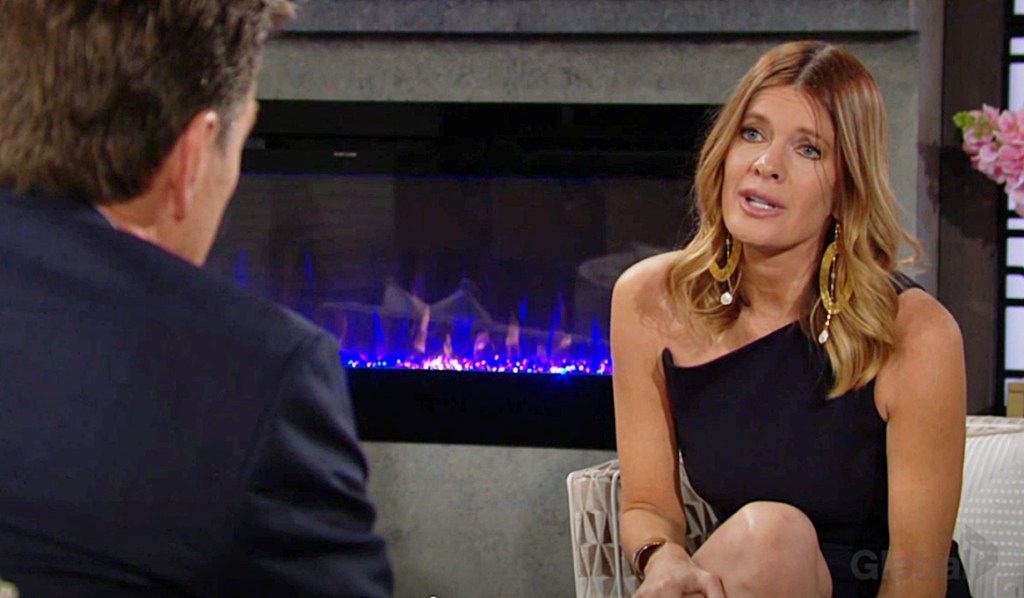 At Sharon’s place, she and Rey discuss Faith before talk turns to his conversation with Chelsea. He reveals she’s able to speak again but she couldn’t offer anything new on Adam. Sharon wonders if it’s really such a bad thing if Adam’s gone. Rey scoffs at her being okay with Adam getting away. They debate whether there’s merit to the accusations against Chelsea. Sharon’s pleased he even thinks there’s a chance Adam is innocent. She asks him to keep an open mind as it’s a sign of his trust in her. Rey fumes; what about her trust in him? 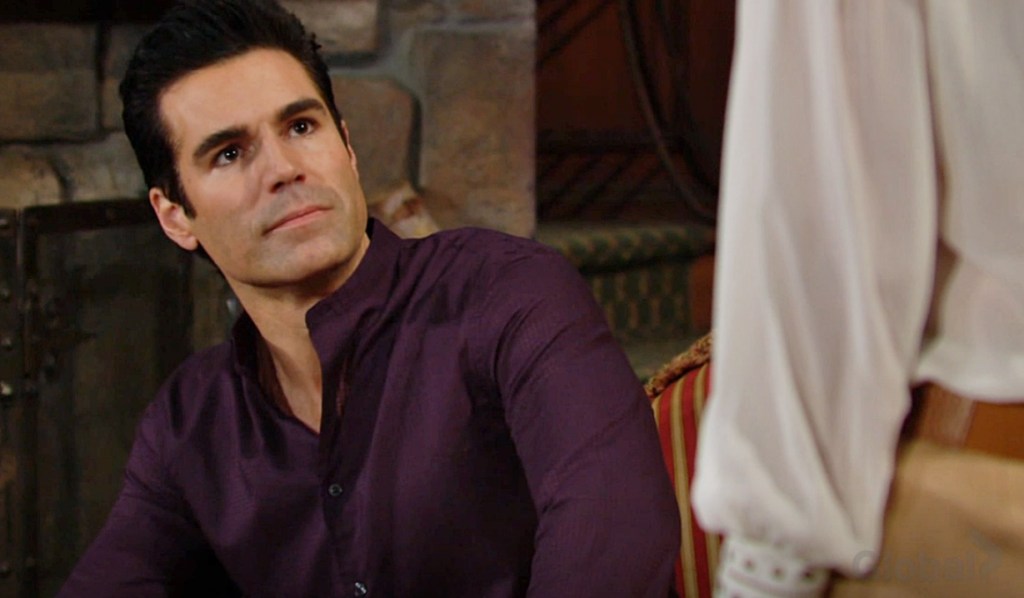 Rey hollers about Sharon lying to his face when he asked her if Adam had contacted her. Sharon argues that when she went to see Adam it was to thank him for saving Faith. Rey retorts that she always puts Adam first — that’s where her heart is. He’s a fool for letting this go on for so long. “You don’t love me the way that I want you to.” Sharon insists they’ll work through this in therapy — if they have a problem. Rey marvels at her being in denial and says he doesn’t want to fight anymore. He can’t overcome her feelings for Adam. Sharon suggests they talk again in the morning. Rey will stick around until Faith gets back on her feet but after that he’s moving out and nothing she can say or do will change his mind.

Adam enters the ranch and calls out for his father. He then sits and imagines Sharon telling him that he always runs and she always follows. He can’t expect that will happen this time. Adam sighs; he knows they’ll never be together again. He then imagines Chelsea mocking him for hiding out at the ranch where he tortured Ashley; he can’t run from himself. She tells Adam he needs to realize that this has been years in the making. Adam fumes at her thinking he betrayed her; he knows she regained her ability to speak and has been plotting against him ever since.

The mirage changes back to Sharon who tells him he destroys everyone he loves. Adam tells her that he’s trying to be a better person, but Sharon’s not buying it and points out he pushed Chelsea to the edge. Chelsea reappears and sneers that Adam turned his back on her when she needed him most; that’s why she was able to frame him for poisoning Rey. “You want to be the one by Sharon’s side.” Sharon materializes again and accuses him of wanting to ruin what she had with Rey. Together, Chelsea and Sharon inform him he’s not worthy of love or forgiveness. Adam realizes he’s done nothing but bring them pain. Sharon wonders what he’ll do about it. 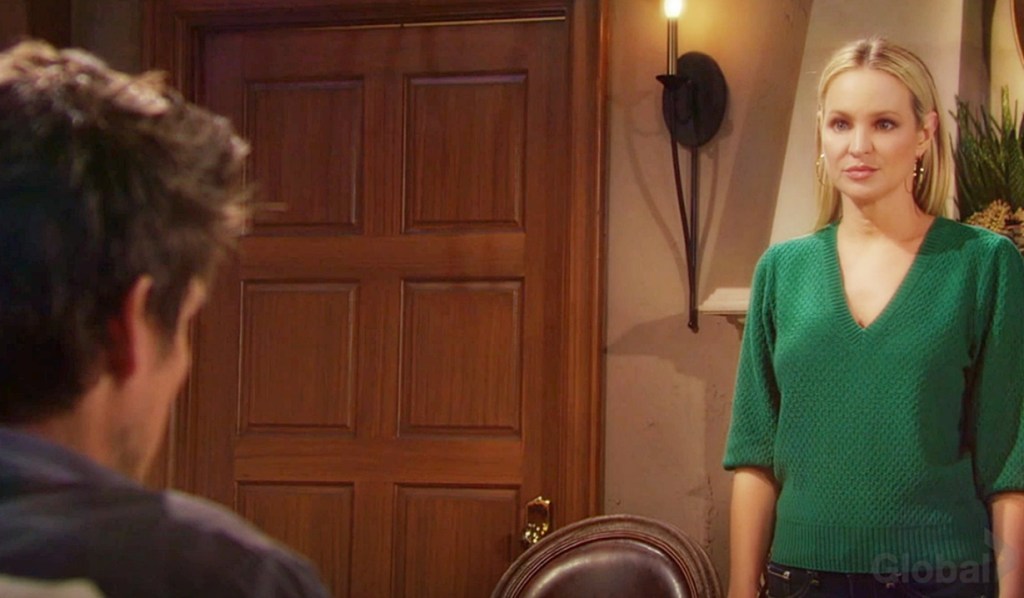 At the penthouse, Chelsea updates Chloe on her visit with Rey as the doorbell rings. She returns to the wheelchair as Chloe opens the door to a stern looking Victor. Chloe leaves them alone. Victor advises Chelsea to drop the act; he knows what she did. She should come clean now and save them a long, painful process. Chelsea looks wounded and he smirks at her wide-eyed evidence. He says she nearly killed a man and framed Adam for it. Chelsea wonders if Sharon put this in her head. Victor tells her he never trusted her. He tolerated her but always knew she was a low-life grifter. 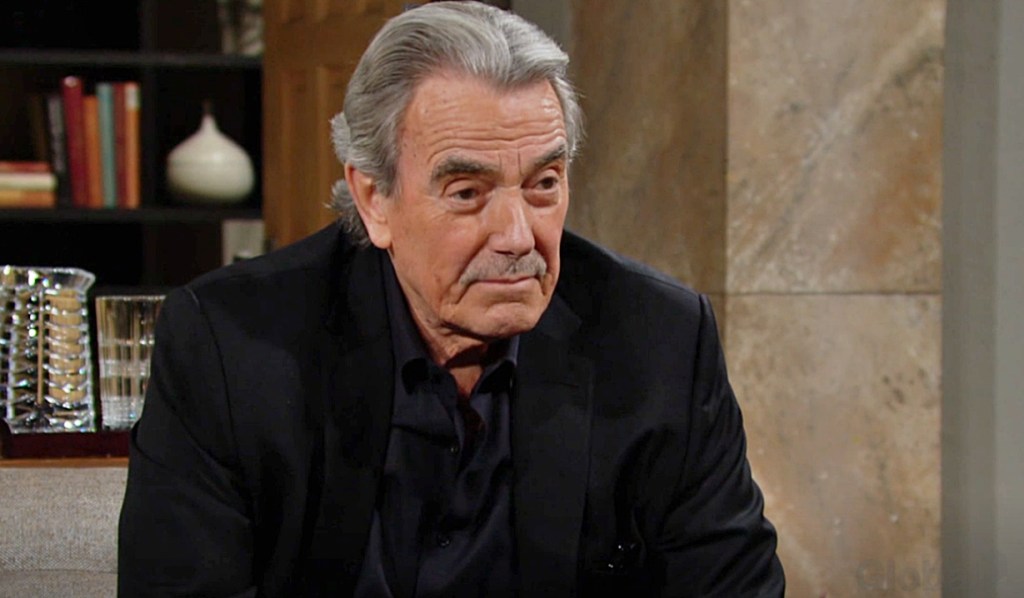 Chelsea insists to Victor that she’s telling the truth. Victor asks how it feels to lie so blatantly. He intones, “Don’t you forget, I warned you.” After Victor’s gone, Chelsea describes to Chloe how she didn’t back down. Chloe worries; Victor’s threats are rarely empty and she could lose everything. Chelsea snaps at Chloe about her fear and negativity; it’s suffocating! Offended, Chloe retorts that she’s feeling pretty claustrophobic herself. She packs up to leave and complains that Chelsea sucked her into this without letting her know what she was getting into. She took advantage of their friendship to get what she wanted. Chelsea, panicking, argues that everyone thinks Chloe is looking after her. Heading out the door, Chloe tells her she’ll figure it out, and snarks, “You always do.” 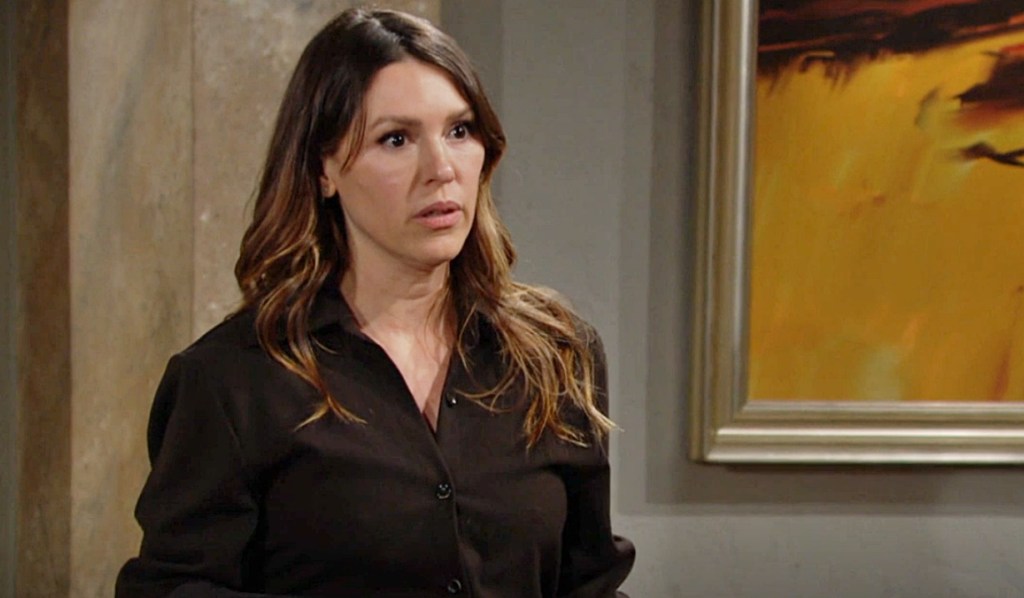 Sally enters the hotel as Jack’s about to leave. She asks if he’ll stick around and talk to her. Jack agrees. She needs him to know she wasn’t with him for his money, last name, or what he could do for her; she really liked him. Sally promises not to slip up again. Jack’s sorry, it doesn’t change anything for him; they need to go their separate ways. Jack exits and Phyllis smirks and sips a cocktail. After, Phyllis informs Sally she has until tomorrow to vacate the premises. Sally vows she’ll regret this — and everything else she’s done to her. Phyllis moves in close and says, “Bring it.” 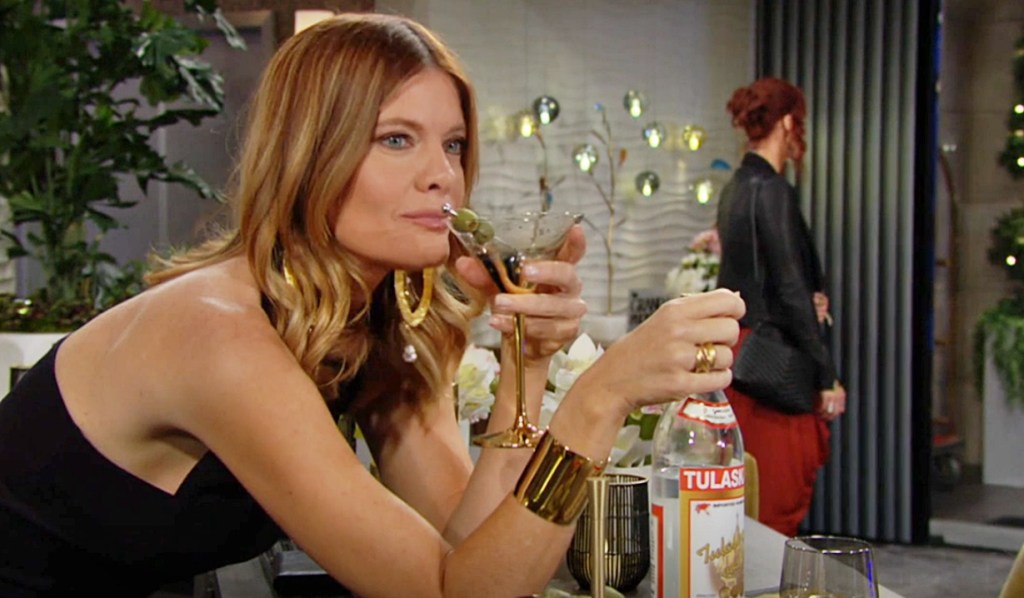 Victor joins Adam at the ranch and tells him Chelsea played the innocent, fragile victim. She claimed Adam was responsible for what happened to Rey and he told her it was nonsense. Adam’s heartened by Victor’s belief in him but he’s hurt too many people in Genoa City and needs to leave town. Victor protests — there’s still hope. Adam won’t reverse his decision. Vic sighs and asks, What about Connor?” Adam would like to take him to the farm and get back to his roots. Victor argues the cops will be looking for him; even there. Adam has a plan. Victor assures his son he’ll continue to prove his innocence and will see to it Chelsea gets what she deserves. Adam appreciates him clearing his name but doesn’t want Chelsea hurt any more. 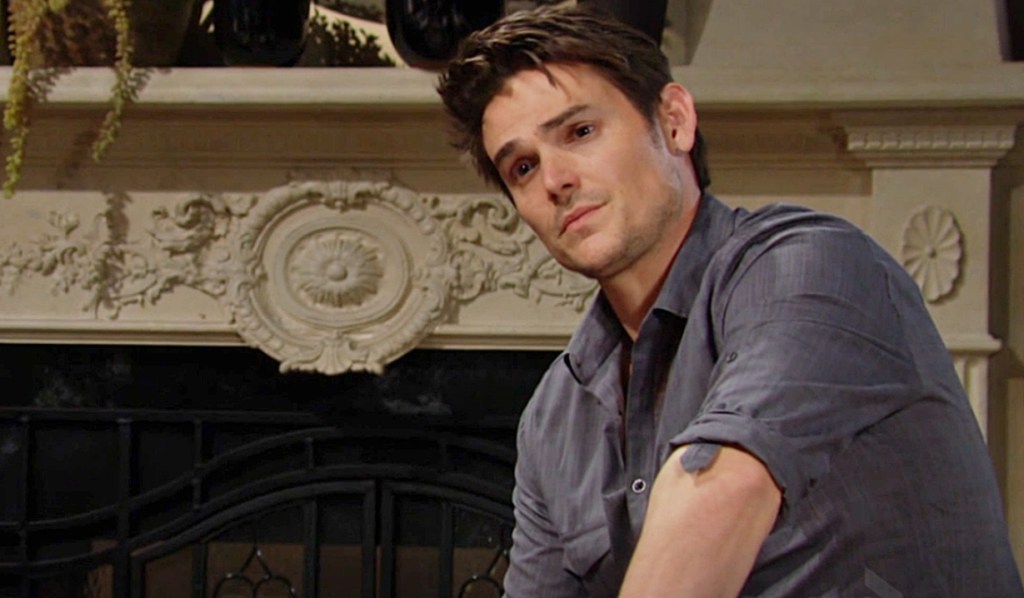 More: How will Chelsea exit Y&R?

In their suite, Kyle’s concerned after taking a call from Billy that there are rumblings about Jabot and unsafe working conditions. They wonder who could be behind the trouble and realize they can’t rule out Ashland Locke.

Next on The Young and the Restless: Victoria turns the tables on Adam.

After you find out who’s taking over from Mishael Morgan as Amanda, don’t miss photos of Sally Spectra’s defining moments in the gallery below. Get your free daily soap-opera fix for The Young and the Restless — and all of the other daytime dramas — delivered straight to your email inbox by signing up for Soaps.com’s newsletter.

Victor and Victoria Clash Over Her...