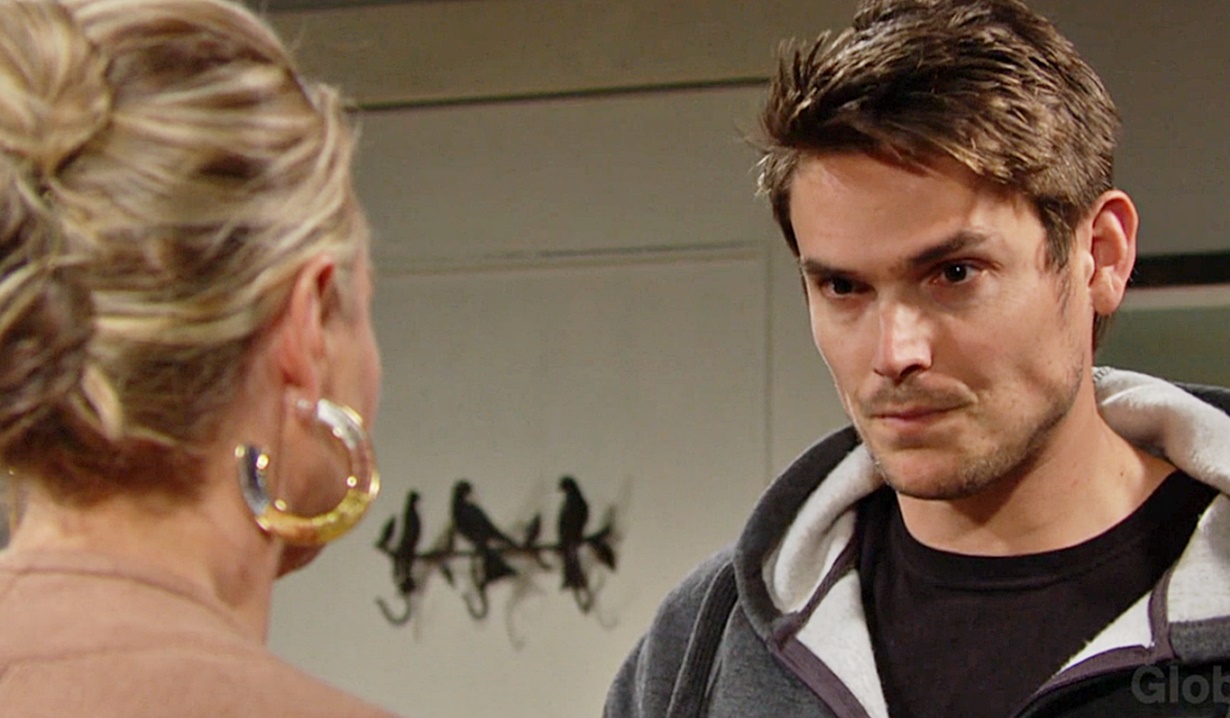 At the lake, Adam’s relieved to see Sharon, thinking she’d abandoned him. She’s brought him some supplies. He knows it’s a sacrifice for her to be there… and to go out on a limb to help prove his innocence. Sharon explains he saved Faith, and if he didn’t poison Rey she needs to know who did. She asks, “How do we make this happen?”’ 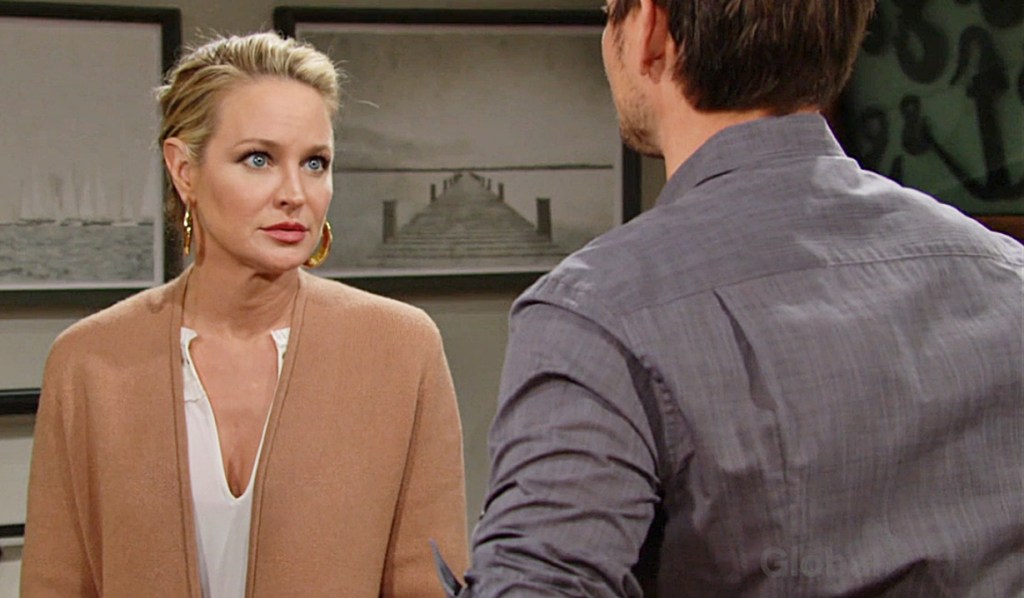 At the hotel, Sally exits after a brief exchange with Phyllis. Summer appears and informs her mother she’s the reason she is now in a terrible position with her boss. She’s unimpressed when Phyllis plays innocent and wants her to admit she said something to Lauren that led Sally to confront her. Phyllis was just trying to nudge her back to Los Angeles where she belongs, but Lauren wanted to know her motives. Summer begged her not to interfere. Phyllis needed to step in. Summer snarls at her to step somewhere else next time and storms out past Nick. 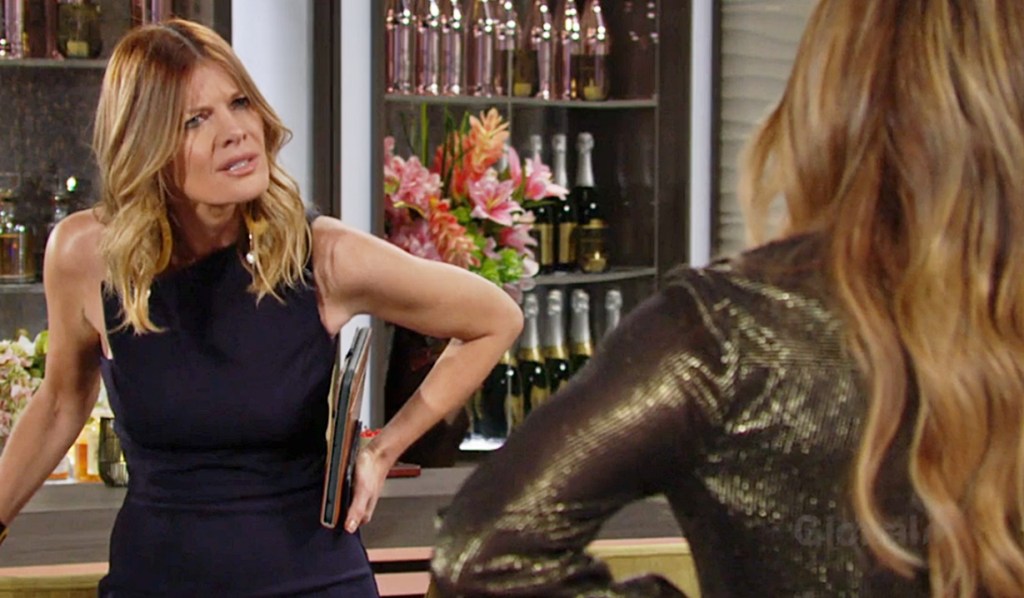 Nick asks what that was all about and Phyllis shrugs it off as a work thing. Nick says Faith will be coming home soon and complains about having to be grateful to Adam. They go over the heroics of what he did. Phyllis points out he’s still Adam and runs down his past crimes. Nick assures her he hasn’t forgotten, he just doesn’t know what to do with the gratitude. Phyllis tells him to write a note, stick it in a bottle and throw it into the river. “Let it go.”

Naya arrives at Amanda’s suite and apologizes; she’d have warned her if she had known her father was planning to visit her. Amanda muses that it was enlightening and asks Naya for honest answers about her father. “Tell me about him.” Naya says Richard had a larger than life personality; he was fun, sexy and always knew how to make her laugh. But he wasn’t ready to settle down and was driven to succeed in business. They laugh over Amanda getting her determination from both sides of her family. Naya informs Amanda they want her to head up Sutton’s defense. Imani is the only one who thinks it’s a mistake, but accepts it’s what the family wants. Amanda would like to have peace with Imani. She agrees to take the case. Naya enthuses, “Praise God! Welcome to the family.”

More: Why Y&R needs to bring Dru back

Lauren finds Jack in the Jabot boardroom and announces she’s worried about him… along with her company, Summer, and that up and coming dynamo, Sally Spectra. She warns the battle between Summer and Sally isn’t over… in fact, Summer may have been the one who started it and forced Sally to retaliate. She questions even hiring Sally in the first place; she deliberately lied and covered up. She’s equally upset with Summer. Lauren tells Jack he needs to talk with Sally. 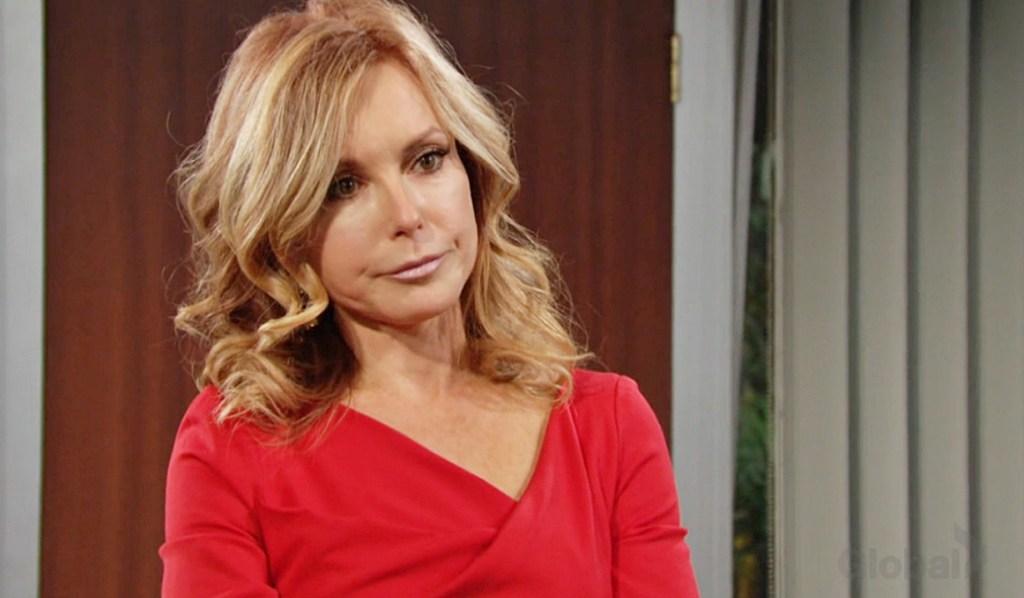 At the Chancellor Estate, Abby worries the pregnancy test could be negative today and doesn’t want to get her hopes up. Devon and Mariah will get theirs up for her. Abby can’t wait another minute — she has to know!

At Crimson Lights, Kyle gets a text from Ashland, “Call me.” He grimaces, but makes the call.

At the hospital, Elena greets Devon, Mariah and Abby. She will be administering the pregnancy test and will fast-track the results. Devon thanks her. Later, as the trio paces in the waiting room, Elena returns and announces the test was positive. Devon and Abby cheer and Mariah tells them she’s not pregnant THEY are pregnant. Elena thinks they brought new meaning to the phrase, “It takes a village.” Mariah goes for a snack and Devon tells Abby he’s sorry Chance isn’t there. They marvel that he’s going to come home to a new little boy or girl. 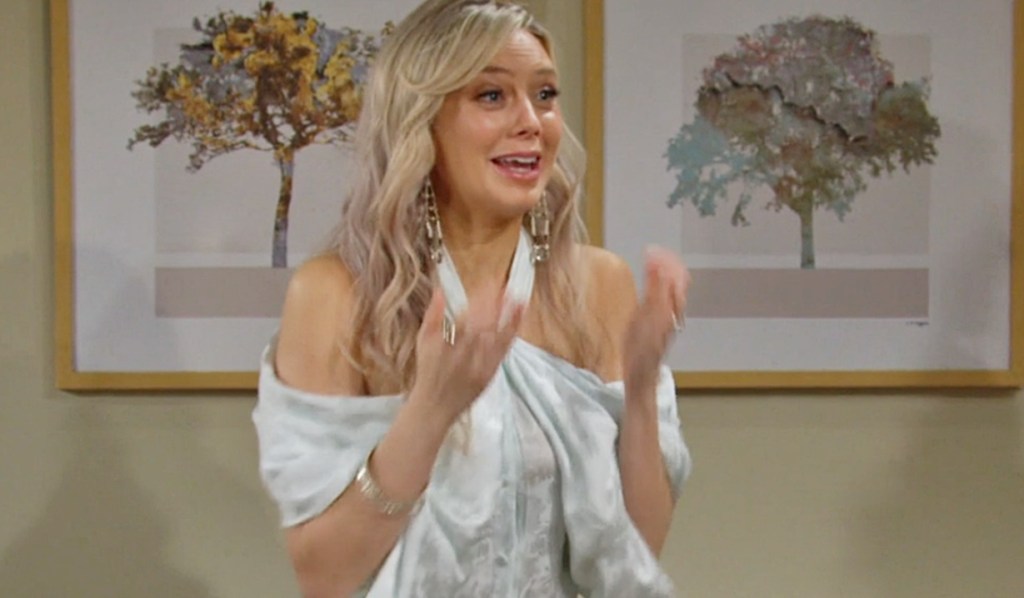 At the penthouse, Chloe tries to convince Chelsea to enact a plan to make Adam think Connor is sick to lure him back to town and into a police trap. Just then, Sharon knocks and calls out to Chelsea, who hustles into the wheelchair. Chloe lets her in and Sharon asks to speak to Chelsea alone. She whispers, “I heard from Adam. I came to let you know he’s safe… and he’s nearby.” Sharon doesn’t want Chloe to know because she’d turn him in, but says he wanted Chelsea to know he was okay. She tells Chelsea that Adam saved Faith’s life. In her mind, Chelsea snarks that Adam would do anything for his precious Sharon, including risk his freedom. 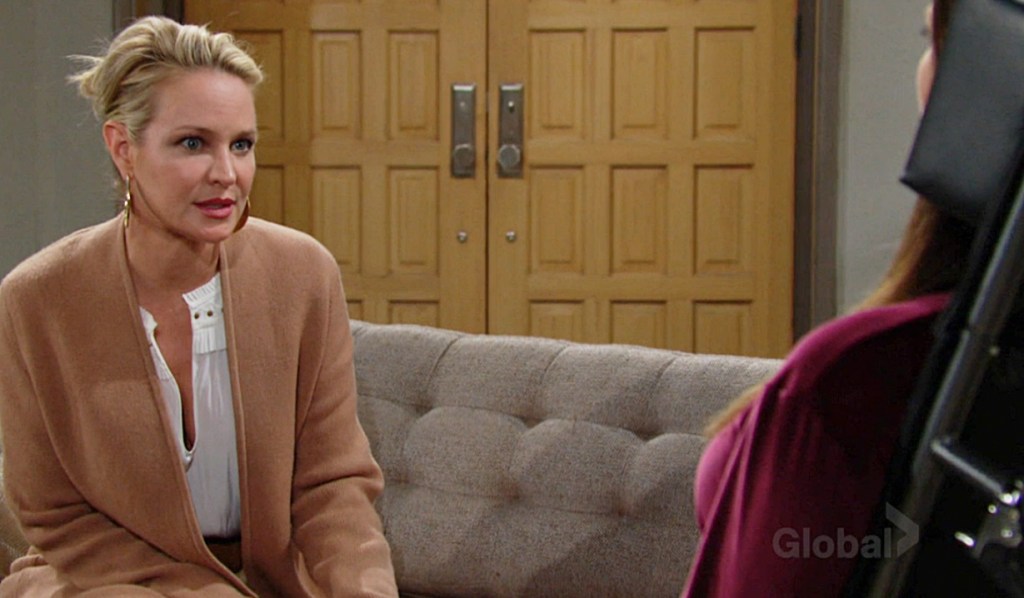 Sharon goes on that finding out who poisoned Rey is one way she can begin to repay him. Chelsea wishes she’d go home to her husband and stay out of their business. Sharon knows Chelsea agrees with her that Adam’s innocent and promises to keep her posted on everything she finds out. Chelsea thinks, “No! This isn’t supposed to be happening!” Sharon goes upstairs to get some things to take to Adam and leaves Chelsea stewing. When she reappears, she assures Chelsea that she’ll do whatever it takes to clear Adam’s name. After Sharon goes, Chelsea jumps up. Chloe asks where she’s going. Chelsea says she has to follow Sharon! She fumes as she relays that Adam reached out to Sharon, who is determined to prove his innocence. 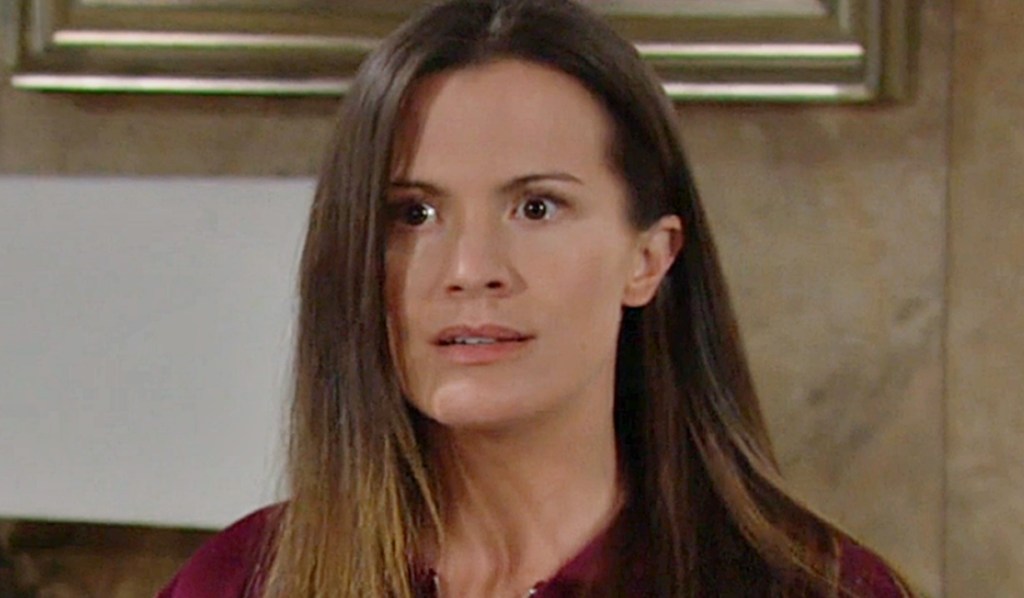 At Crimson Lights, Amanda notices Devon seems far away. He smiles; he just got the news that Mariah is pregnant. Amanda congratulates him, if that’s the right thing to say to the donor. Devon admits it’s a strange feeling to know his DNA is growing into a human right now. Amanda imagines it’s bringing up memories. Devon thinks it’s totally different than Hilary carrying his child. He feels closer to Mariah and Abby than ever before. Talk turns to Amanda, who confirms she’s taking her grandfather’s case. Devon thinks it could be good for her. Amanda asks him to keep it to himself that she and Sutton are related. She marvels that for someone she’d never met, her grandfather was quickly able to tap into what drives her. Amanda looks forward to learning more about who she is and what she’s made of — this is what she’s wanted her entire life. 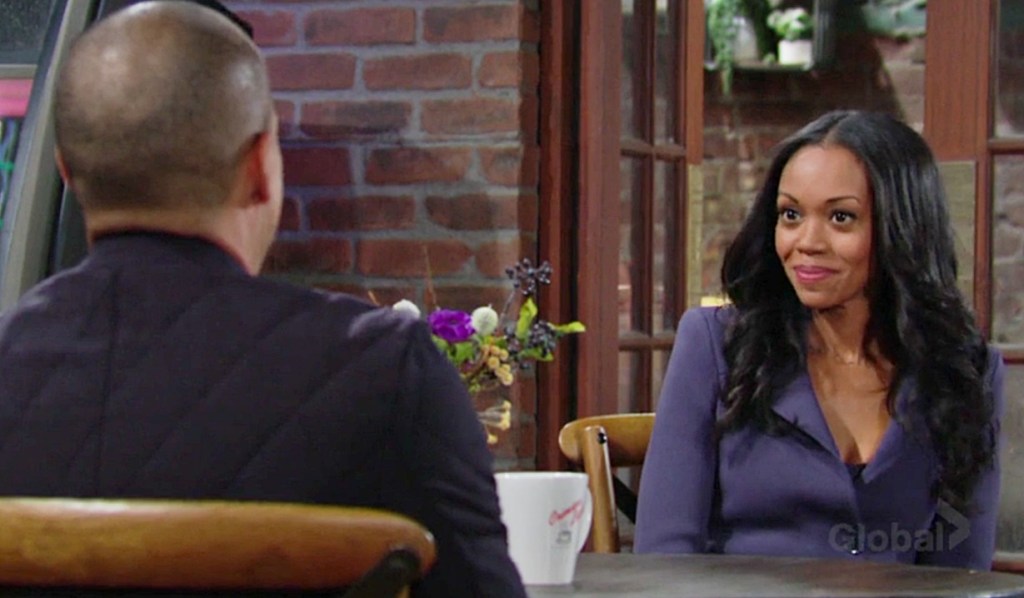 On the patio, Jack finds Sally and asks her how she managed to upset Lauren. Sally tries to dodge the question and he calls her out on it. Sally wonders if she still has his support — maybe he should just walk away. Jack isn’t going to judge her, but he can’t help unless she tells him the truth. 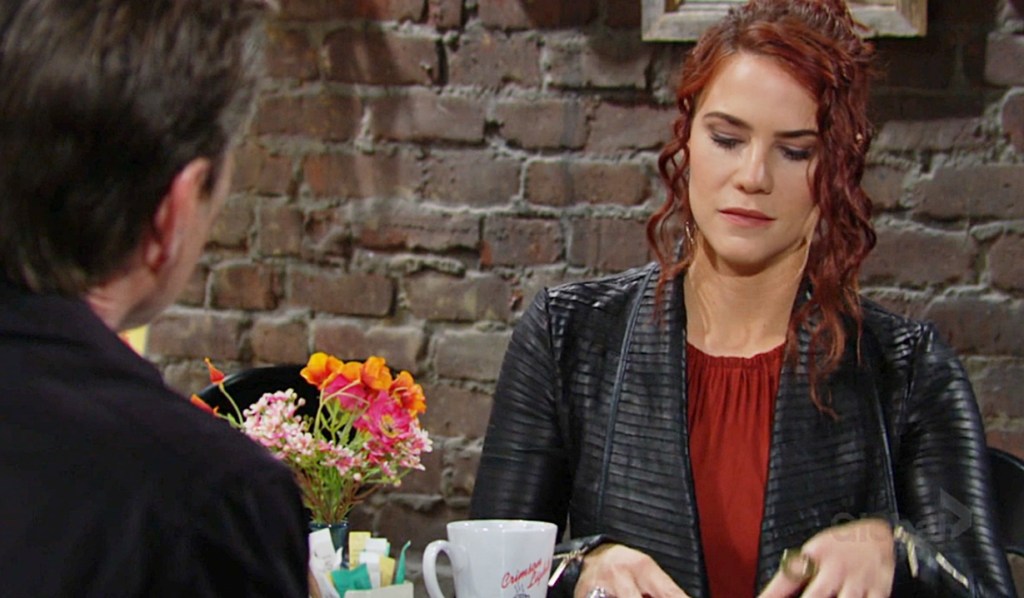 More: Will Lauren force Summer and Sally to do *this*?

At Jabot, Summer takes a call from Lauren, who wants to talk in person. She disconnects as Kyle arrives. She tells him thanks to her mom, they have to worry about Sally all over again. Kyle replies, “Forget about Sally. Things have only got worse.” He relays that Ashland contacted him to say he’s changed his mind about doing business with Jabot. “The guy is toying with me. I knew it. I’m afraid this could just be the beginning.”

At the Chancellor Estate, Abby and Mariah enthuse about the pregnancy and Mariah tries to wrap her mind around morning sickness and maternity clothes. Tessa flies in and Abby leaves them to talk. Mariah tells Tessa it’s official; she’s pregnant. Tessa is so happy for her. Mariah relays that it’s incredible and a little weird — it’s not every day you tell your life partner you’re expecting someone else’s baby. Tessa couldn’t be any more in love with her that she is right now… she’s so generous and giving. 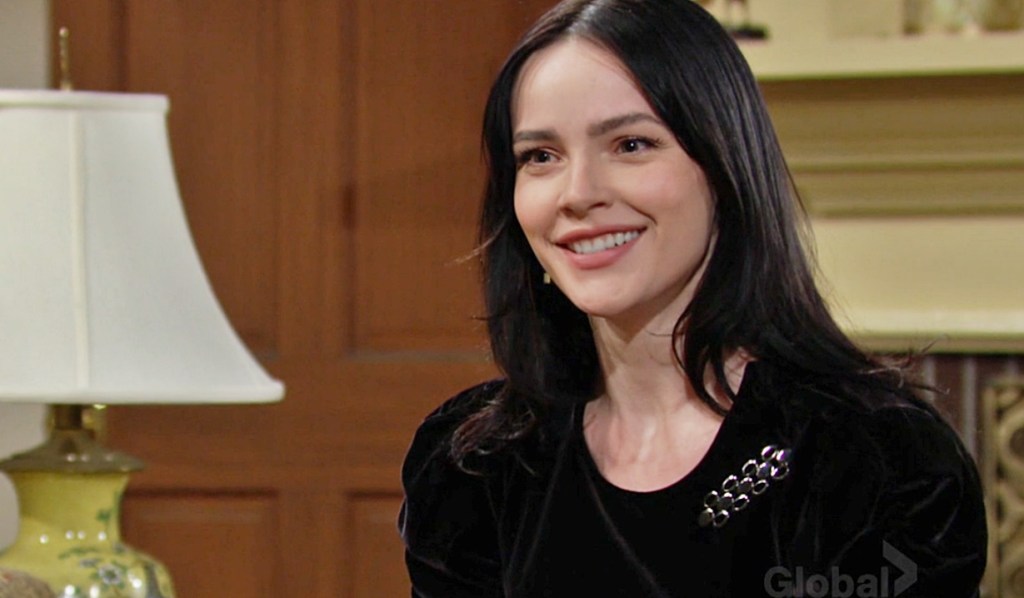 Later, alone, Abby makes a video for Chance telling him the news and wishing he’d been there. “All of our dreams, they’re coming true.”

Sharon returns to the lake and tells Adam that Chelsea didn’t seem any different, but there was a disturbing vibe right beneath the surface. Adam can’t understand how things got so messed up, but if he’s right, something pushed her over the edge and caused her to turn on him. Sharon says, “That somebody is me. Adam, that something is us.”

Next on The Young and the Restless: Lauren takes control.

Join the April Fool’s Day fun in the photo gallery below. Get your free daily soap-opera fix for The Young and the Restless — and all of the other daytime dramas — delivered straight to your email inbox by signing up for Soaps.com’s newsletter. 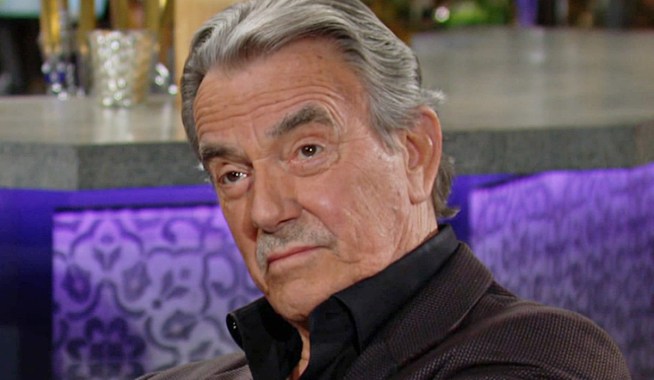 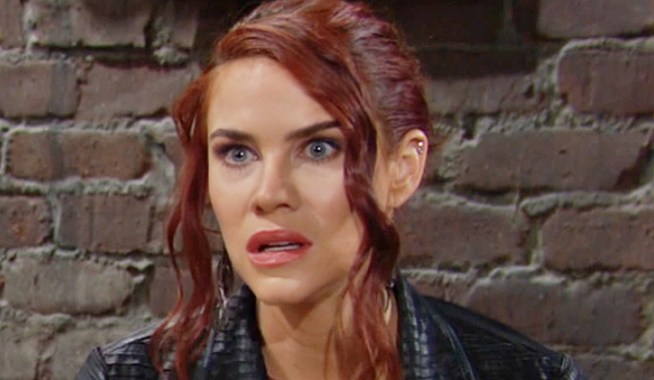