Wednesday, April 7, 2021: Today on The Young and the Restless, Moses and Faith reconnect, Victoria and Lily square-off, and Sharon tells both Rey and Nick to get off her case. 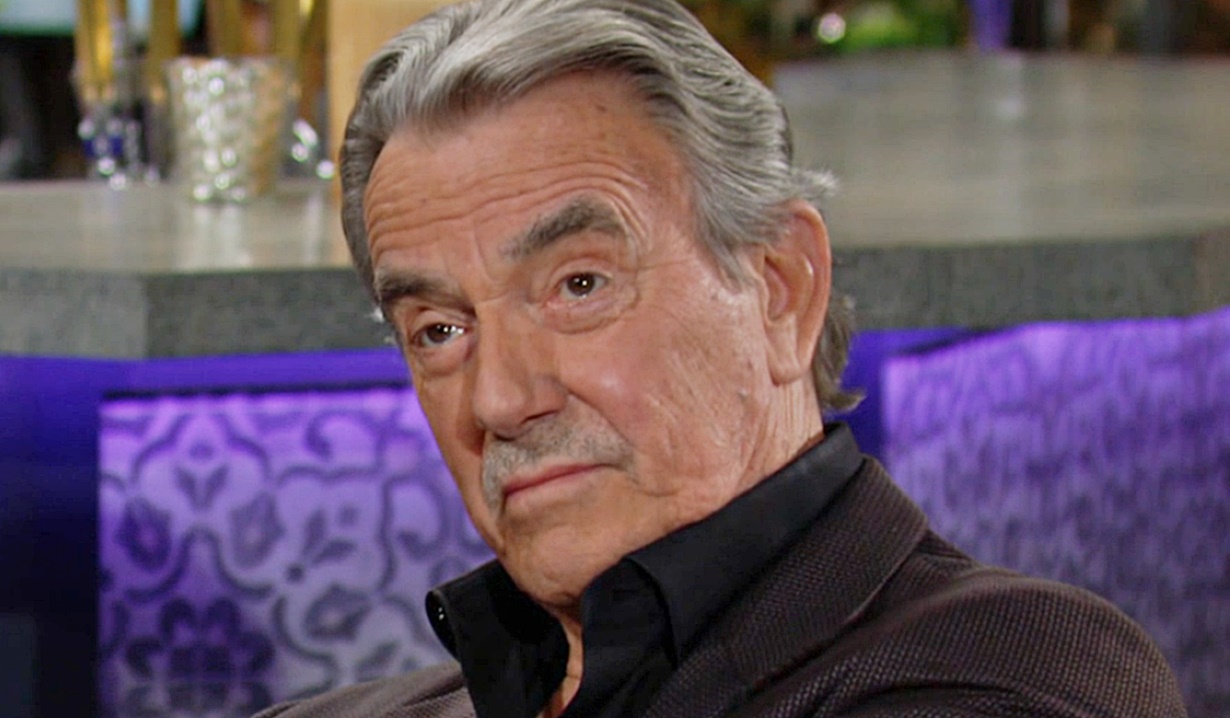 At Chance Comm, Billy informs Lily that he turned down Victoria’s offer. She finishes leaving Amanda a voicemail asking her to call back, then tells Billy that their best employees are being poached. Billy immediately guesses Victor’s behind it. Lily’s hoping Amanda can find a non-compete clause in their contracts. Billy fumes that Victor’s coming after them guns-a-blazing. Lily still doesn’t want to take Victoria’s offer and be in a Newman family war. Billy wants Victor’s paws off of what’s his. Lily urges him to let it go. Billy argues; does she want to just sit there and get eviscerated? Lily informs him he has no idea what she’s capable of and leaves to handle it herself.

Sharon arrives at home and jumps out of her skin when Rey appears. He sees she’s keyed up and asks what’s wrong. Sharon insists she’s fine, but Rey persists. He suggests she shut down the coffee house until their lives settle down. Sharon’s taken aback; that’s not feasible. Rey mentions a colleague who tried meditation and Sharon snaps, “I’m fine okay? Enough of the helpful suggestions!” She apologizes and then announces she has to go to the hospital. Rey offers to go with her, but she may stay all night. Rey wants to have ice cream first but she makes excuses and bundles out the door. 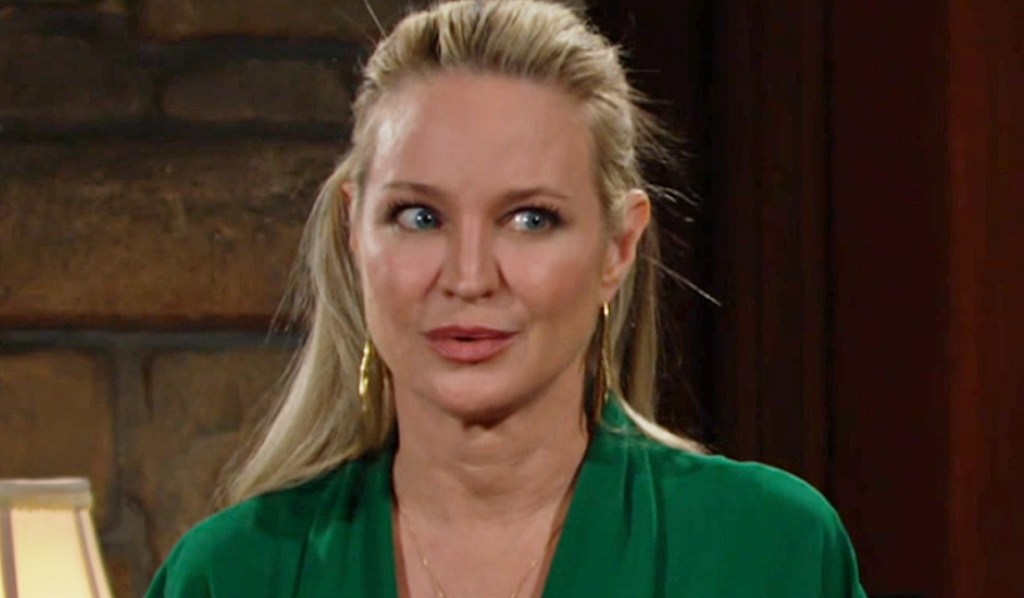 At the coffee house, Nick updates Nikki about the consequences Faith may face; they’ll have to see what the courts decide. They discuss her doing rehab and therapy and Nikki offers to speak to Faith about what to expect. Nick was hoping she’d say that. Nikki’s determined to make her granddaughter see she’ll never be truly alone. Talk turns to Adam. Nikki complains he’s calculating; he tried to kill Rey and now Sharon has to be grateful to him for saving Faith. Nick laments the hold he has over Sharon. 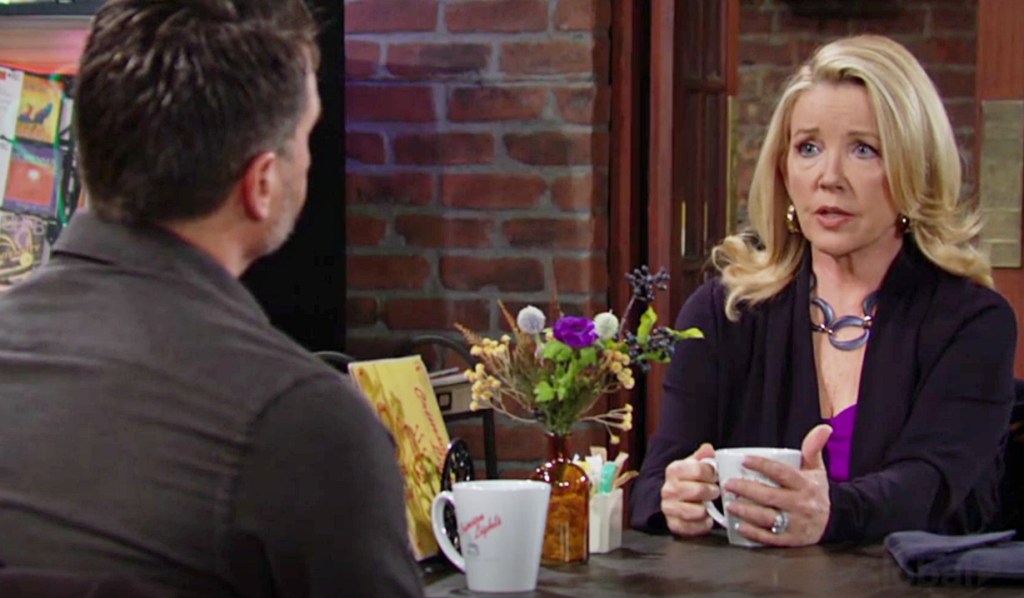 At the hospital, Moses, who is volunteering, brings Faith takeout from Lola. She offers to share with him. Moses wants to know more about her accident. Faith changes the subject and asks what brought him back to the hospital. Moses explains Nate arranged for him to volunteer and confirms he’ll be in Genoa City for a while. Faith shares that her accident was a result of being bullied at school, which led to some poor decisions. Moses was bullied when he was younger. Faith hopes to become stronger because of it. Moses hopes the kids who bullied her never meet him. Faith smiles. 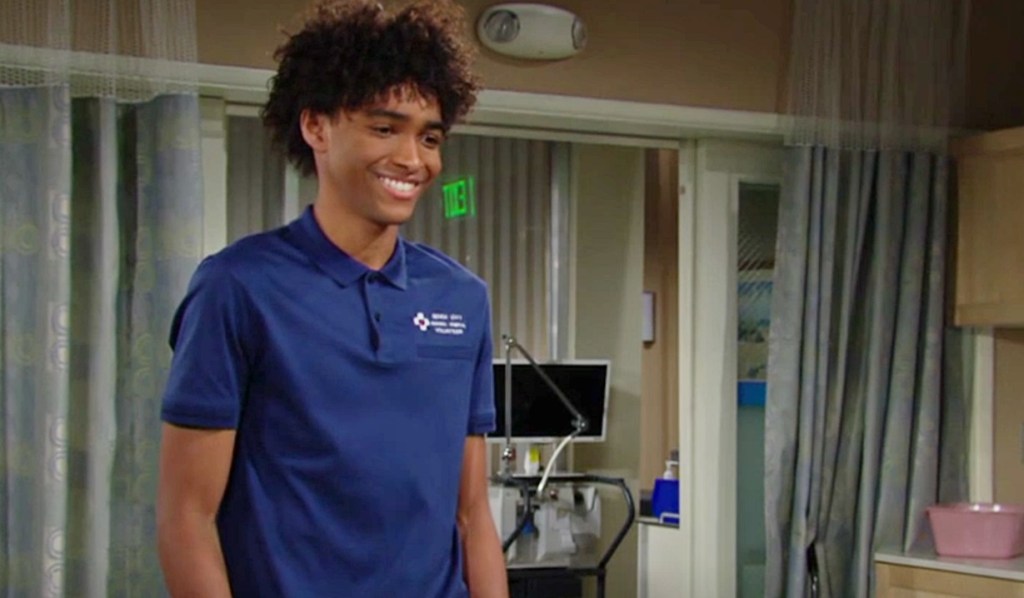 More: The Y&R death that should be reversed

Nikki arrives at the hospital and teases Faith about the balled-up paper on the floor. She explains she’s trying to write a letter of apology to her parents but it’s harder than she thought. Nikki understands; the words on the page force her to confront her actions. They talk about rehab and Nikki warns she’ll have to be brave. Faith asks, “What if I feel like I can’t do it.” Nikki reassures her; “You’ve got this.” 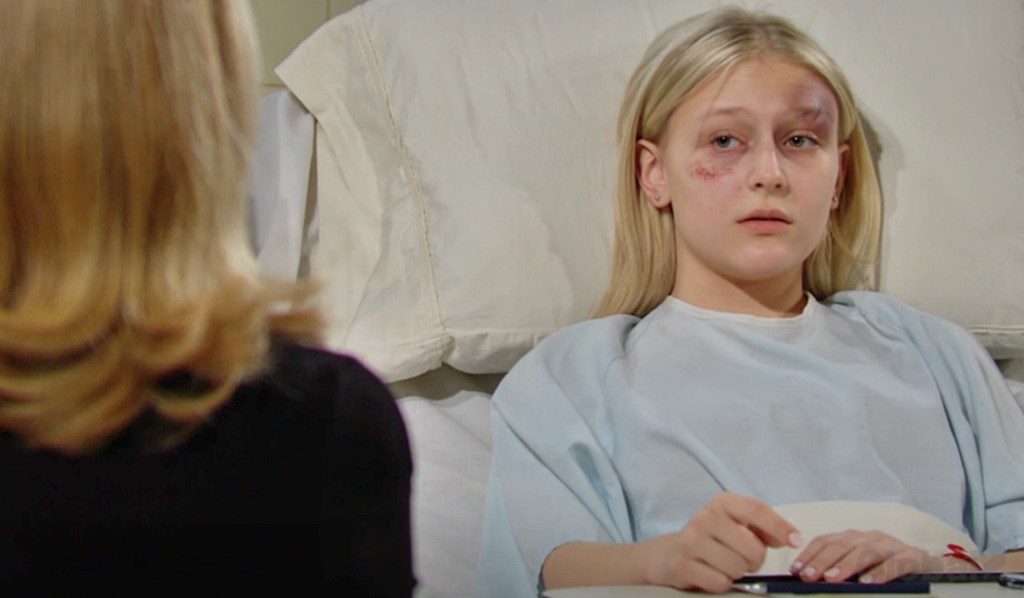 Nick stops in at Sharon’s place and Rey tells him she’s gone to see Faith. He shares his concern that she seemed defensive. Nick observes there’s a lot going on right now. Rey wishes there was something he could do about Adam. Nick muses that part of him want’s to shake him hand… but while he’s in handcuffs. Rey wants him in a prison cell. Period. He wishes he lived in a world where Adam never existed.

Billy finds Victor at Society and baits him about Adam being on the lam. Victor booms, “You lost, Billy Boy, accept it. For your information, my son is innocent.” Billy needles that it must get exhausting defending him. Talk turns to the writers Victor’s poaching from Chance Comm. Billy warns you can buy talent but you can’t buy loyalty, then reveals Victoria came to him wanting to partner up to get Locke to reconsider selling to him. Victor’s taken aback momentarily and then tells Billy that Locke is unlikely to go back on his decision. He snarks about Victoria’s weakness when it comes to Billy, and in return, Billy makes jabs about his issues with Adam and Victoria. Victor promises he’ll take down Chance Comm and warns, “You don’t even know what’s in store for you. Fasten your seatbelt.” 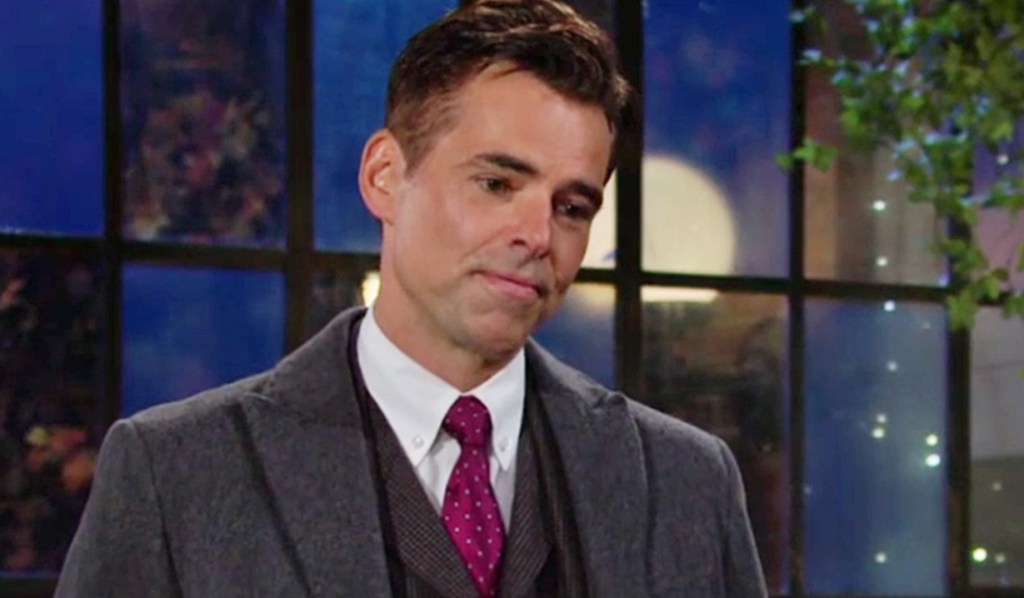 At Crimson Lights, Victoria tells Lily it’s a shame they won’t be teaming up. Lily’s not upset about it and warns Vikki to stop playing games with Billy. They’ll always be connected through the kids but the tortured saga of Victoria and Billy is over… permanently. Victoria smirks. She assures Lily she merely approached Billy about a simple business alliance and accuses her of being insecure. Lily’s eyes are wide open. Victoria suggests she take those eyes and look at Billy. Deep down he’s a gambler and any minute now he could jeopardize everything they’ve been building both personally and professionally. She walks out with a look of satisfaction. 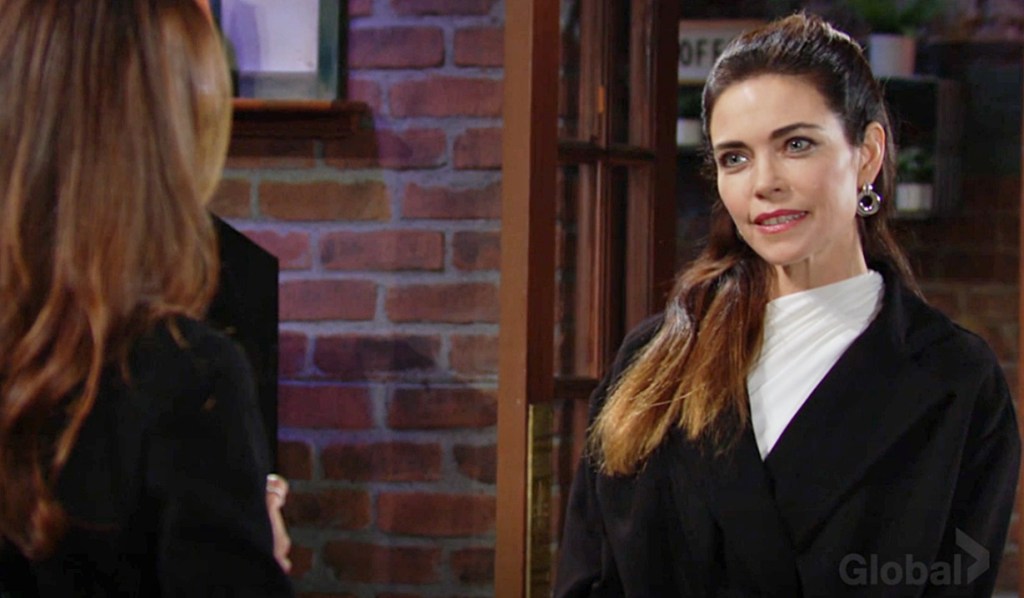 Nick wanders into the hospital room as Nikki’s helping Faith with her letter. Faith figures the letter she writes after she’s done the work at rehab will be better than this one. Nick warns she’ll be on total lockdown between rehab and school. Faith thinks she’s pretty lucky… she screwed up and could have died, but she still has a family around her who loves her. “Things could be a lot worse.”

Later, Sharon arrives with gifts for Faith and speaks to Nick alone. He scolds that she should have been there for the conversation with Faith, and relays that Rey told him her head has been elsewhere — like she’s keeping something from them. Sharon wonders if this is an interrogation and is irked about him talking about her behind her back with her husband. She points out there’s a lot going on and tells him to stay out of her way. 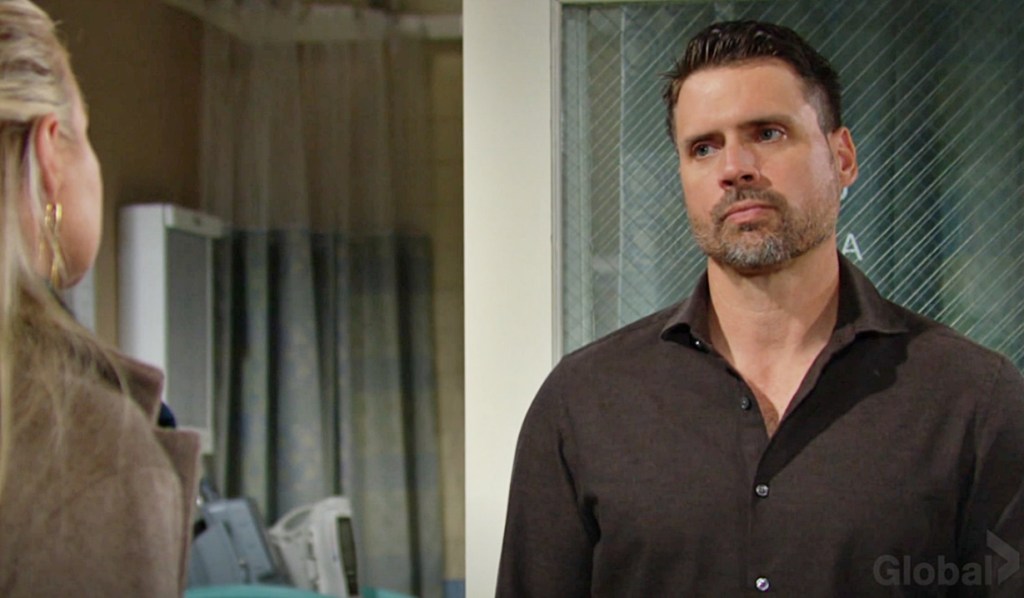 Victoria comes upon Victor at Society and asks if there are any updates on Adam. Victor’s sure he’ll come out of hiding when his name is cleared; he plans to find the culprit. Victoria thinks Locke will see it as a liability. Victor asks if she was always planning to form a partnership with Billy Boy to crush his bid… or was that her Plan B after she lost? Victoria claims it was business and he would have done the same. He questions her real motivation and she denies trying to get back with Billy. Victor’s unconvinced. He leans toward her and intones that he put her in charge of Newman because he believed she showed good judgment — now he’s not so sure.

More: Can we talk about the writing for Adam?

At the hotel, Billy runs into Ashland and confronts him about his claim that he’s invested in Cyaxares’ future, when he’s selling to someone on the run for attempted murder — his competitors will have a field day with it. He warns again that Victor only wants the company to weaponize it him against him. Billy thinks Ashland can protect Cyaxares by telling Victor no.

As Ashland walks off, Billy spots Lily boarding the elevator. The doors close before Billy can get there. Upstairs, Billy knocks on Lily’s door. When she doesn’t answer right away he presumes she’s angry and launches into a pitch. Lily opens the door in a sexy black outfit, pulls him into the room and they start making out. 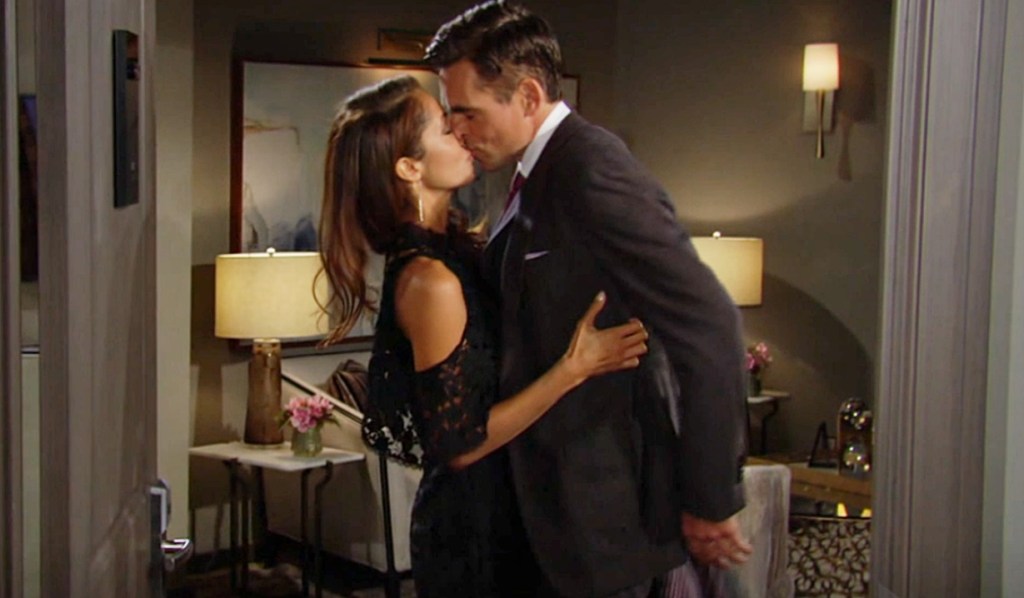 Next on The Young and the Restless: Phyllis warns Nick.

Look back on photos of Sharon and Nikki’s rivalry through the years in the photo gallery below. Get your free daily soap-opera fix for The Young and the Restless — and all of the other daytime dramas — delivered straight to your email inbox by signing up for Soaps.com’s newsletter. 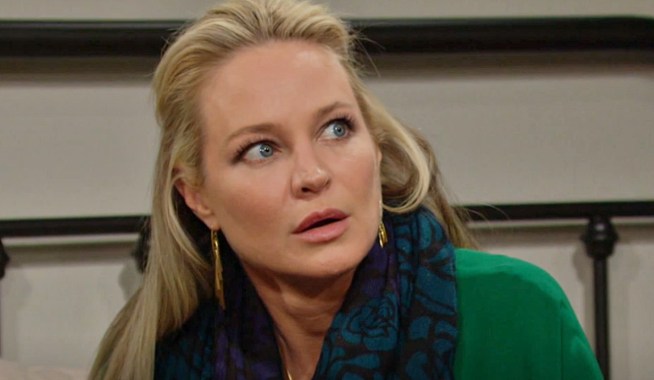 Sharon's Stunned by Adam's Reveal — and His Dangerous Request 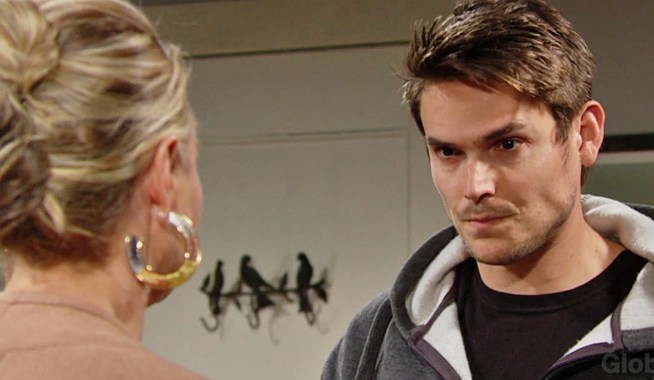