Monday, March 29, 2021: Today on The Young and the Restless, Sharon fumes at Nikki, Victor warns Rey, and Chloe freaks out on Chelsea. 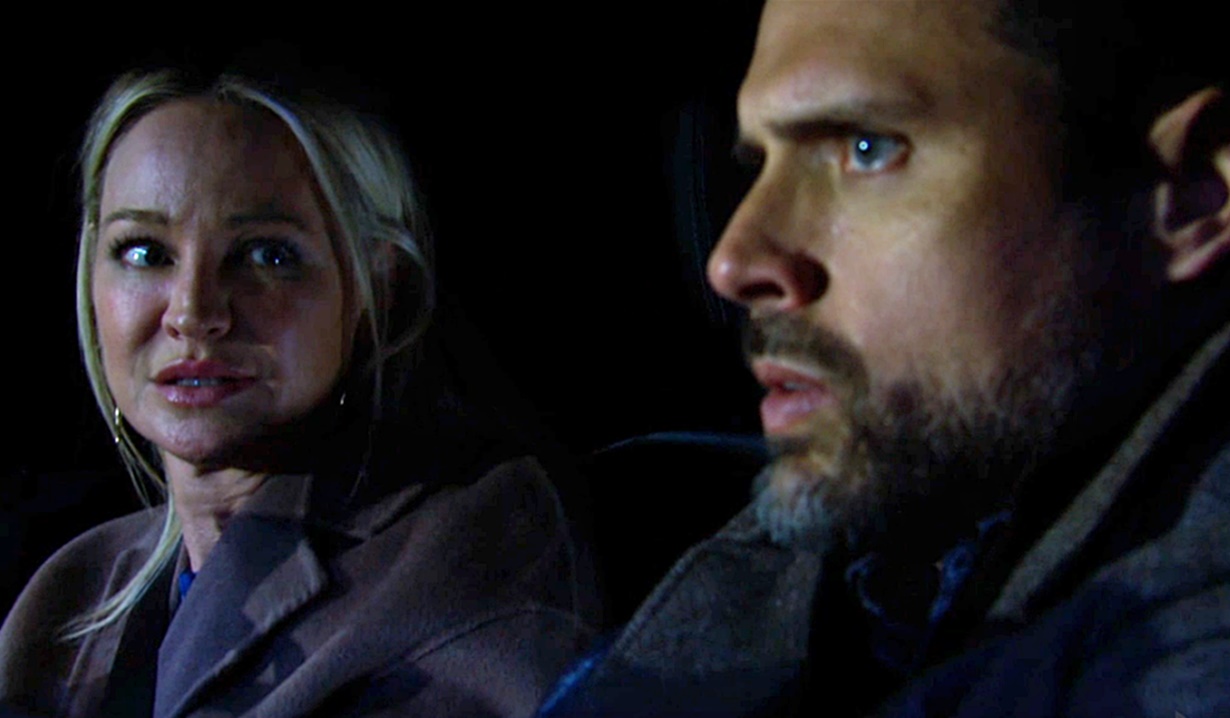 In the penthouse, Chelsea’s up looking out the window when someone knocks. It’s Chloe, so Chelsea lets her in. She hopes she brought the champagne and relays that it’s over — Adam’s on the run from the police. Chloe gawps, “Your plan worked?” Chloe wants to hear everything but Chelsea wants her to have plausible deniability. She confides that Rey showed up with a search warrant and Adam took off. She’s sure he found the poison she put upstairs. Chloe puts two and two together about Rey being in the ICU. Chelsea enthuses about how happy she is, but Chloe blurts, “Chelsea what were you thinking? How could you do this?” 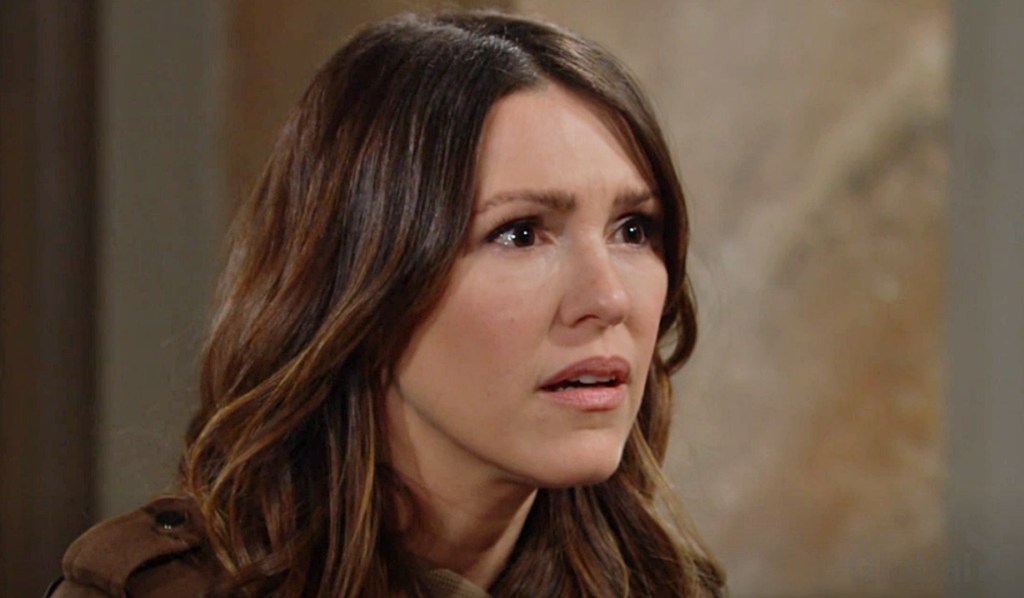 Chelsea doesn’t understand the problem; she didn’t give Rey enough to kill him. Chloe argues Sharon and Faith could have been exposed. Chelsea feels the ends justify the means and no one will suspect them. Chloe squirms as Chelsea reveals how she set him up with the texts. She complains that Chelsea did this and now suddenly she’s an accessory to a major crime! Chloe thought this was about something tamer than attempted murder. Chelsea promises she won’t go to prison.

At Sharon’s house, she asks, “You think I know where Adam’s gone?” Rey presses his wife to come up with a place that Adam would hide. Sharon asks if this is an interrogation. “Do you not believe me? Is that what it’s come to?” Rey points out she lied about the items missing from the house, which had a clear connection to Adam. The man is dangerous and needs to be stopped. “If you hear from him you need to contact me immediately.” He leaves to find Adam himself. 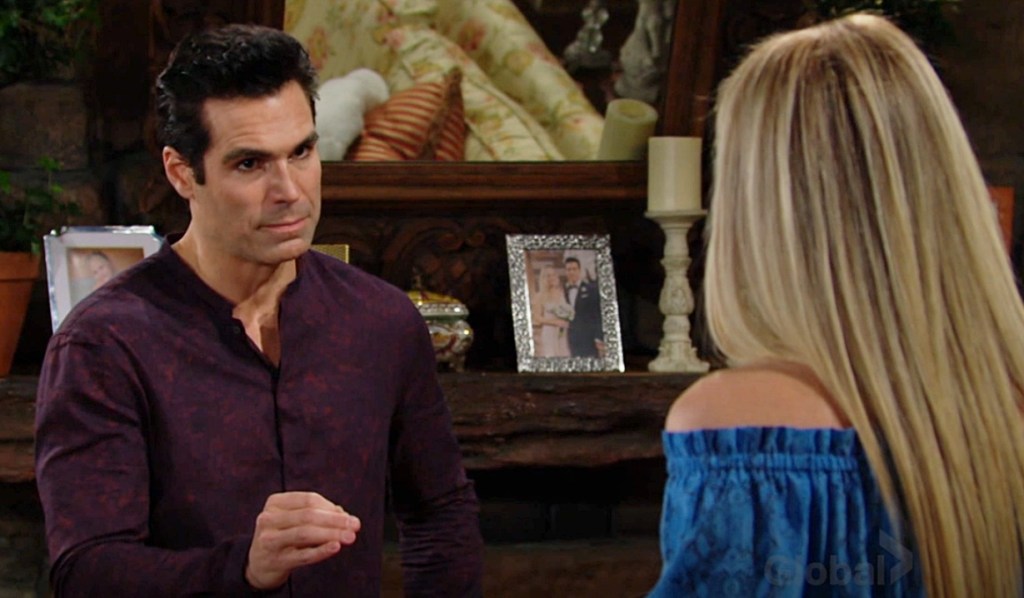 At the ranch, Nikki walks into the living room to find Faith gone. She sees napkins fell off the bar, then realizes a bottle of alcohol’s missing. She gasps, “Oh Faith.” 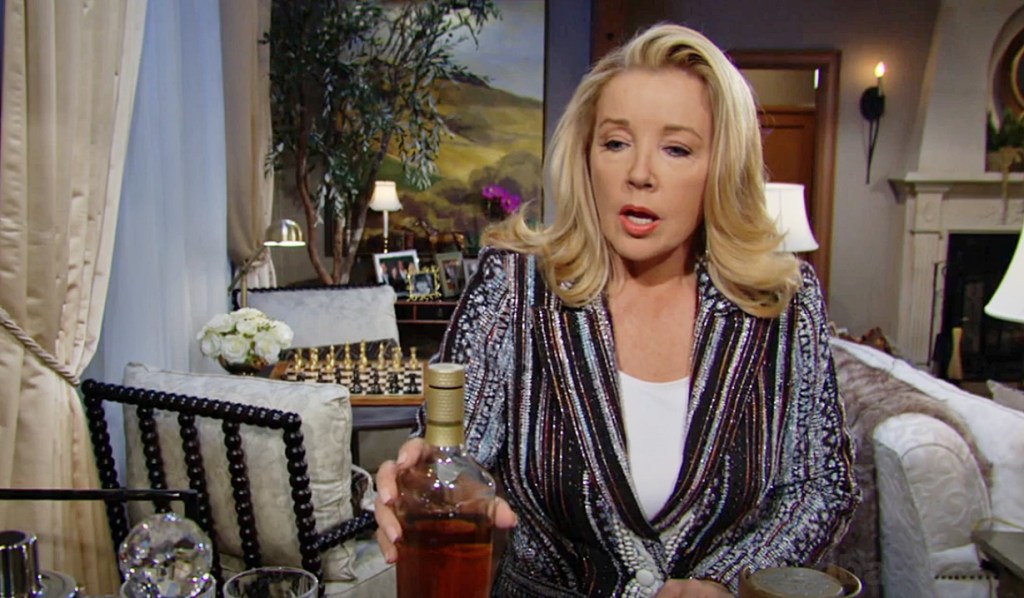 At the Grand Phoenix, Nick leaves Faith a voice mail to call him. “Love you!”

More: Photo tribute to Y&R on its 48th anniversary

In the stables, Faith reads a barrage of mean comments and texts about her being in love and a loser. She cries and then opens a bottle of tequila.

Nikki arrives at Sharon’s place and asks if Faith’s there. She relays that the girl was cat-fished; her secret admirer was Jordan who humiliated her. Sharon knew that girl was bad news. Nikki explains that Faith went missing while she was talking to the cook. Sharon leaves Faith a voice mail to please come home. Nikki tells her there’s one more thing she needs to know — a bottle of tequila is missing from the bar. Sharon seethes, “You’ve got to be kidding. You let my little girl get her hands on a bottle of alcohol?!” After, Sharon calls Nick and brings him up to speed before telling him that Faith’s run off with a bottle of booze. Nick figures she’s on the ranch somewhere; he’s on his way. 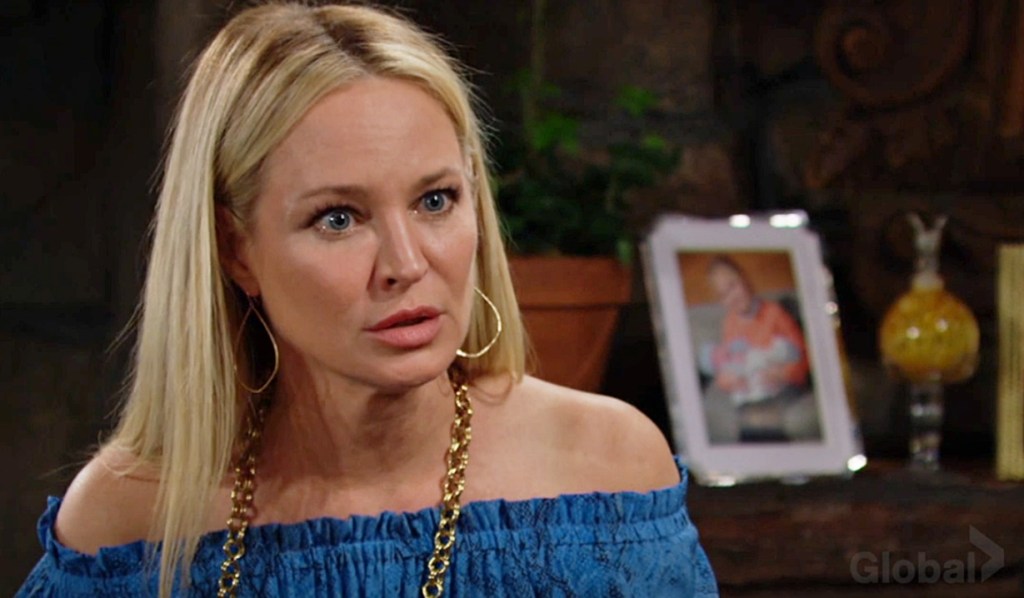 At Society, Victor chuckles when Rey informs him there’s a warrant for Adam’s arrest on an attempted murder charge and he’s the victim. Victor warns him about making allegations and doesn’t know where his son is; he’s probably with the woman he loves. Rey argues that he took off from the penthouse and warns Victor about aiding and abetting. Victor stands up and levels, “Who the hell do you think you’re talking to? You watch it. And don’t you ever threaten me again.” 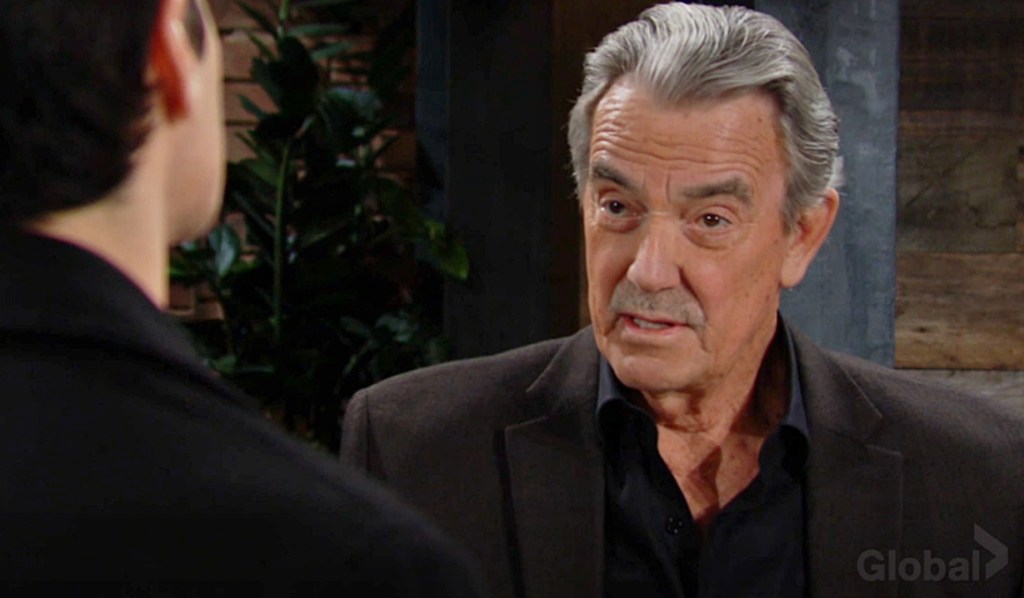 Rey meets with Michael at Crimson Lights and complains about not being able to find Adam. Just then, he gets a call from Sharon who wants him to come home; she’s scared because Faith is missing. Rey reassures her, then disconnects. He updates Michael, who urges him to go find her; then they’ll get on Adam’s trail. Rey exits and Lauren walks in. She joins her husband, who tells her Adam’s causing trouble again and Faith is missing. Lauren’s concerned and is dismayed she was targeted by bullies. Lauren recalls with regret what she did to Tracey, and Michael remembers Fen doing the same to Jamie. Lauren’s pleased to hear that things turned around for Jamie, who is practicing law. She hopes Faith will be okay. Lauren looks forward to the vacation Michael promised her after his next case. She sends him a beach photo for inspiration. 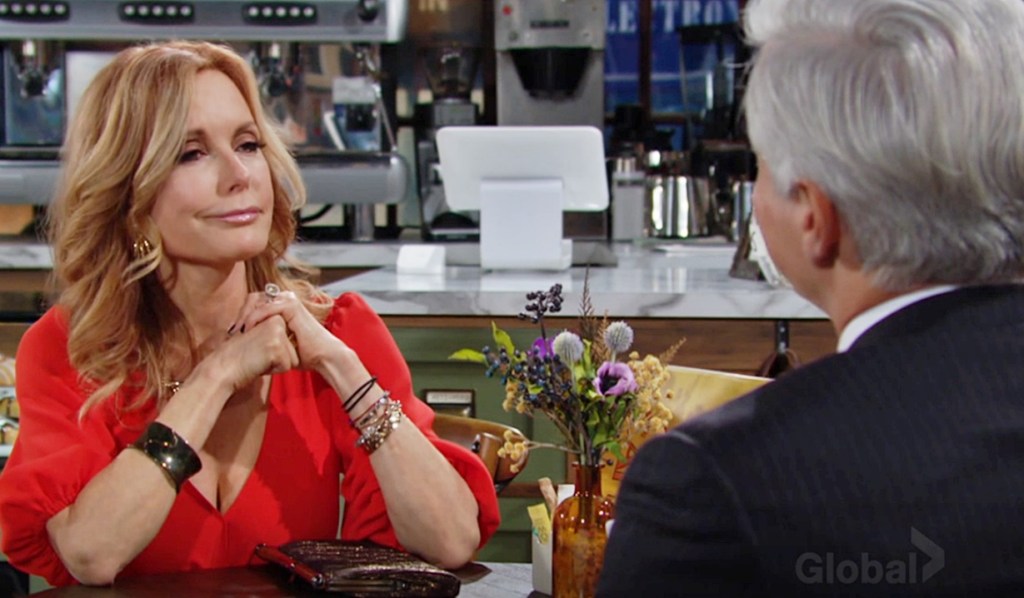 Victor knocks on the penthouse door. Chelsea scrambles into the wheelchair and Chloe lets him in. He asks about Adam and insists Chloe have Meredith the nurse call him when she returns. He tells Chelsea that Rey Rosales is spreading rumors and assures her he’ll bring Adam back to her, not to worry. Chelsea thinks, “Not even The Great Victor Newman can put things back together this time.”

Once he’s gone, Chloe paces; Victor’s going to figure this out. Chelsea counters that the plan is foolproof and she has a solid alibi thanks to her doctor. Chloe points out she doesn’t have an alibi. Chelsea asks, “Can I trust you, or do I have to worry that my best friend will be turning me in?” Chloe assures her they’re in this together; if Chelsea’s going down, Chloe’s going down with her. That said, she promised herself she wouldn’t risk her family to go after Adam again. And even in her past she never put an innocent life in danger. Chelsea’s apologetic. Chloe asks what’s next. Chelsea can only wait; she can’t suddenly make a miraculous recovery, it would be suspicious. She hopes Adam’s on a plane going far, far away.

Michael’s alone in the coffee house when Adam wanders in with his hood up. He spots the D.A. and leaves again.

At Sharon’s place, she tries to reach Faith again as Nick and Nikki hover in the background. Victor enters, on the phone with the security team. No one’s seen her yet but there’s a lot of ground to cover. Victor’s phone rings. He tells the person on the other end to pursue it, then disconnects and informs the group that one of the ranch trucks is missing. Victor learns a blonde girl was seen driving. Sharon panics; Faith can’t drive! Nick says all the kids learned in the golf carts. 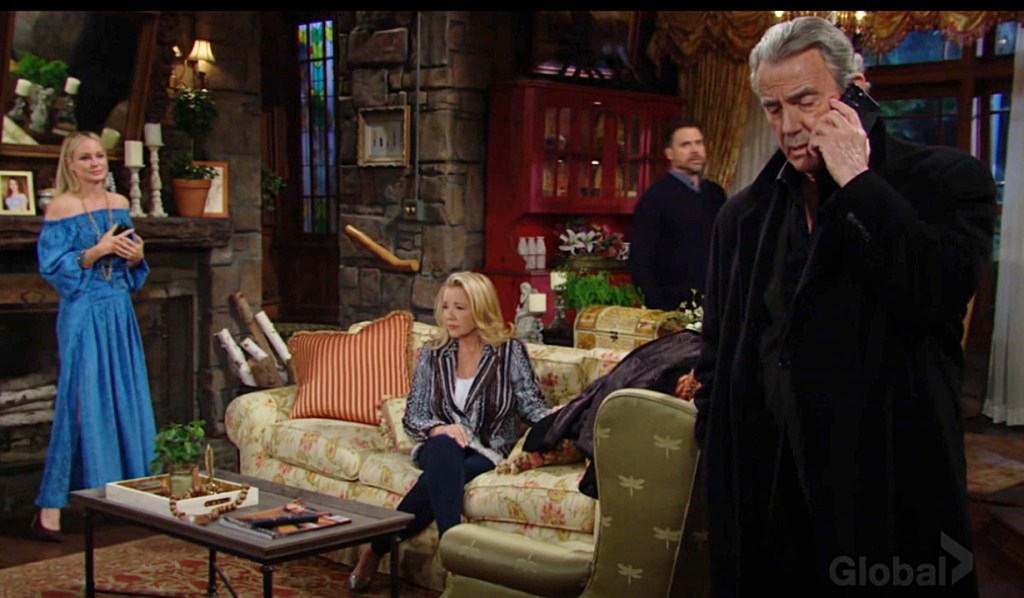 On a dark road, Faith, looking angry and with red-rimmed eyes, drives the missing truck. 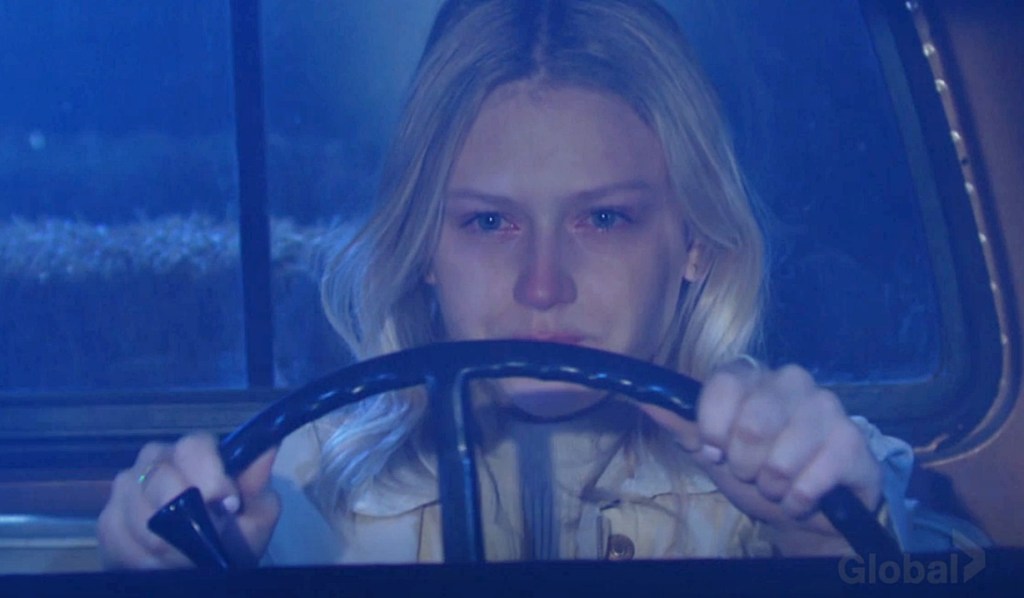 Sharon worries that it’s dark and she may have been drinking. Nick decides to track her phone, but the signal keeps dropping. Sharon and Nick head out to drive around. Nikki feels guilty and Victor reassures her. They discuss her being through so much at a young age. Nikki just wants to hold her and never let go. Rey arrives. He didn’t expect to see Victor there. Vic wonders if he has the same guys looking for Faith that he’s wasting searching for his son, and promises Nikki that Nick will find her.

In the car, a fuming Nick asks Sharon not to let him go to Jordan’s parents’ house. Sharon gets Faith’s location on the tracker; she’s just over the hill… but is moving very fast.

More: Can Y&R’s Nick and Sharon save Faith?

In the truck, Faith accelerates, then goes swerving off the road as a horn blares while she’s trying to look at an incoming text.

Next on The Young and the Restless: Kyle comes clean about his past.

See soaps’ all-time best villiains, ranked, in the photo gallery below. Get your free daily soap-opera fix for The Young and the Restless — and all of the other daytime dramas — delivered straight to your email inbox by signing up for Soaps.com’s newsletter. 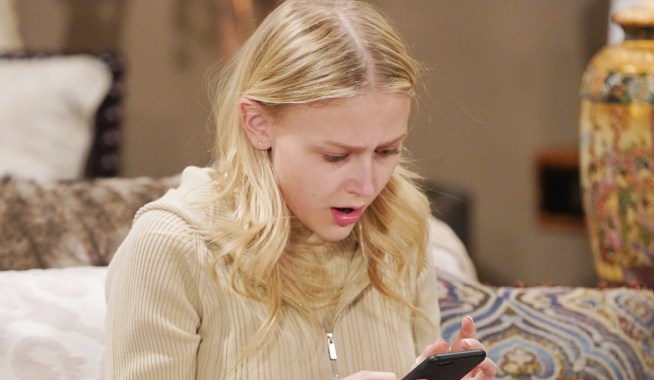 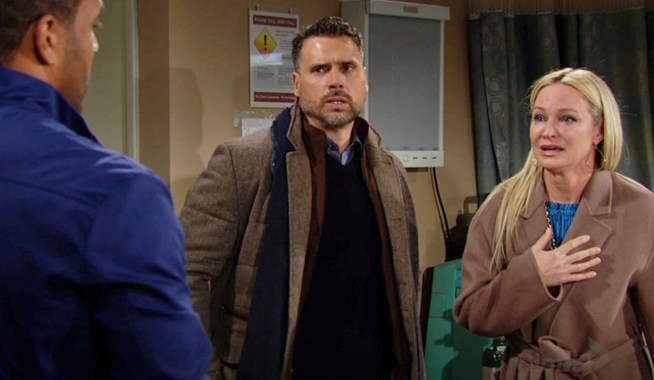