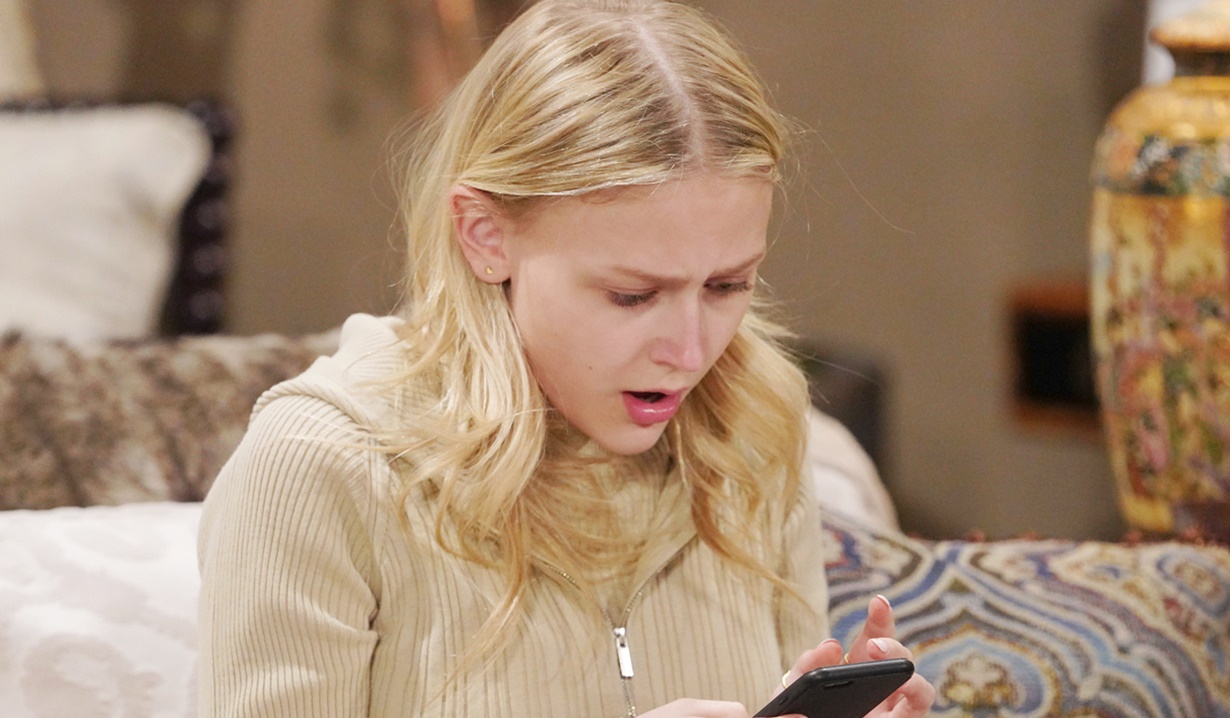 At Sharon’s place she brings Mariah up to date on Rey’s poisoning but changes the subject to Mariah’s procedure when she asks who might have done it. Mariah reports that Abby’s fertilized embryo was implanted into her; it’s a little mind-blowing. Sharon asks if she’s okay with carrying the pressure of Abby’s hopes and dreams. Mariah is a little scared, but also hopeful. She admits she’s already getting a little protective over him or her. Sharon muses about protecting your children from pain and laments Faith being bullied. They marvel over all of them making it through Mariah falling for Noah’s girlfriend. Mariah appreciates that Sharon never judged. Sharon relays Faith’s agreed to start therapy; eventually everything will be okay. 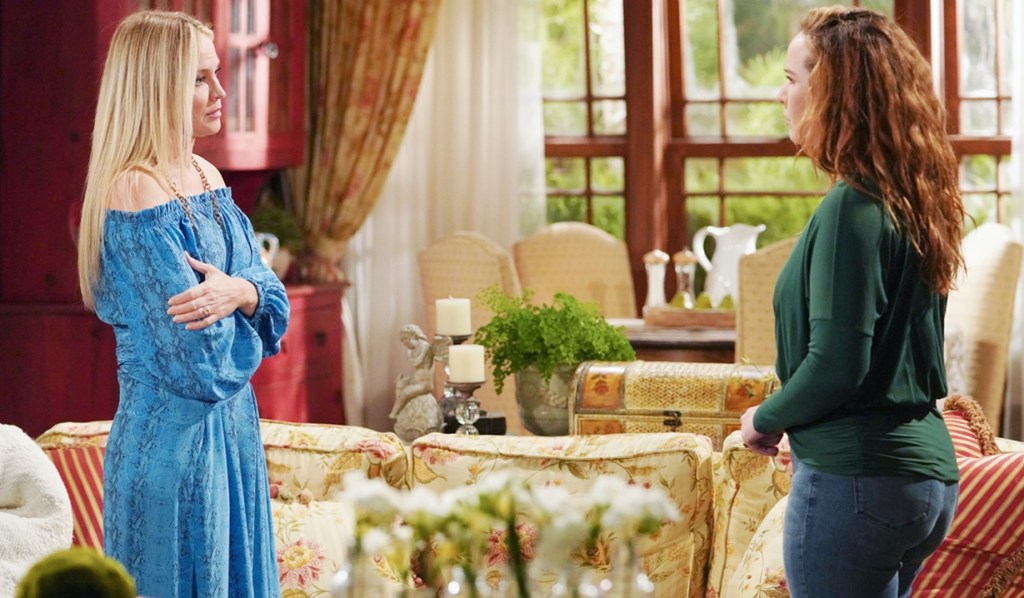 At Adam’s place, he holds up a paper and asks, “What the hell is this?” Rey explains it’s a warrant for his house and car. Adam snarls; what does he think he did this time? In her wheelchair, Chelsea thinks how she’s sorry to have put Rey through this, but it’s going to be worth it. As Rey searches, Adam harps about him over-stepping. He then notes he doesn’t look well. Rey heads upstairs. Adam complains to Chelsea that it never ends. She snarks to herself about what it feels like to feel betrayed.

On his phone, Adam reads about Rey’s hospitalization and wonders, “What’s going on here?” He figures Chloe set this in motion or it was somehow Chelsea. He asks her if she’s recovered enough to fool them all and urges her to talk to him so they can fix this. She thinks to herself, “No Adam, I’m fixing it.” Adam exits, then silently opens the door again in time to see Chelsea smile as though pleased with herself. With that confirmation, he leaves again. Rey comes downstairs and calls out for Adam. Chelsea cuts her eyes toward the door. Rey leaves and Chelsea stretches and grins. 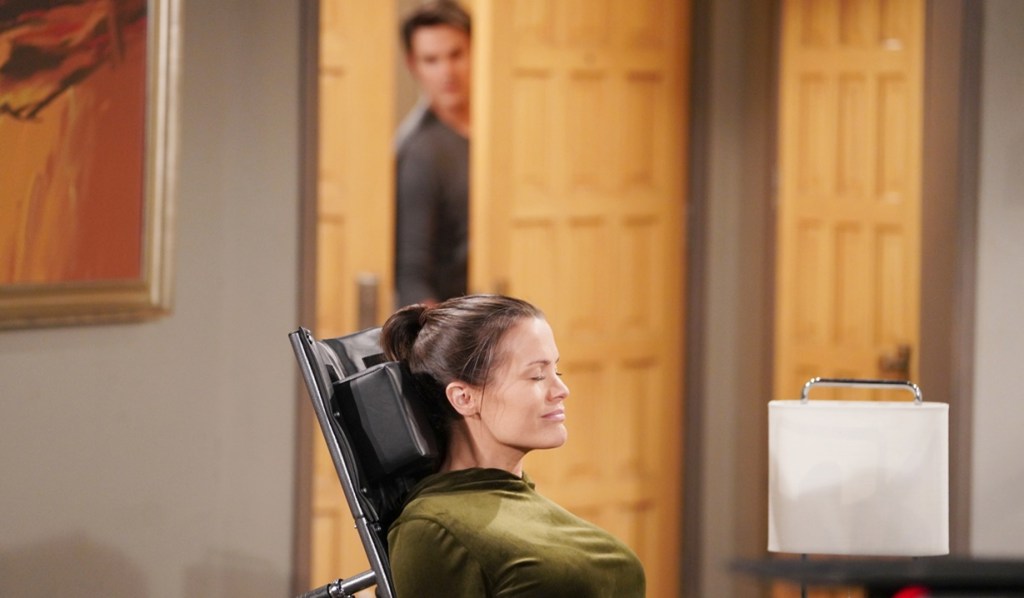 At the Chancellor Estate, Abby’s pleasantly surprised by a visit from Devon. They go over how amazing it is that they all came together to help her have a baby. Abby worries Mariah will become sad that she’s not raising her first child and wonders if Devon will feel the same. Devon is very aware of his role in this and will be the cool uncle. Abby asks if he’s thought of having a family of his own. Devon replies, “Of course,” but confides that he ruined a good thing that could have been a great thing. Talk swerves back to the baby-making and Abby decides to start a video diary to show Chance when he gets home. Devon suggests they get Mariah and have a nice dinner at the hotel. They’ll meet there later.

At the ranch, Faith waits until Nikki’s out of sight then continues her text conversation. The anonymous texter claims he’s Tommy Ross from school. Faith squeals into a pillow, and then texts back that she can’t even believe he noticed her. When he asks to meet, Faith replies that she can’t sneak away right now. A new message comes through asking her to tell him she loves him. Faith whispers, “You’re joking right?” He says he’ll go first and messages that he loves her. She types, “I love you, Tommy Ross.” But her next few texts go unanswered. 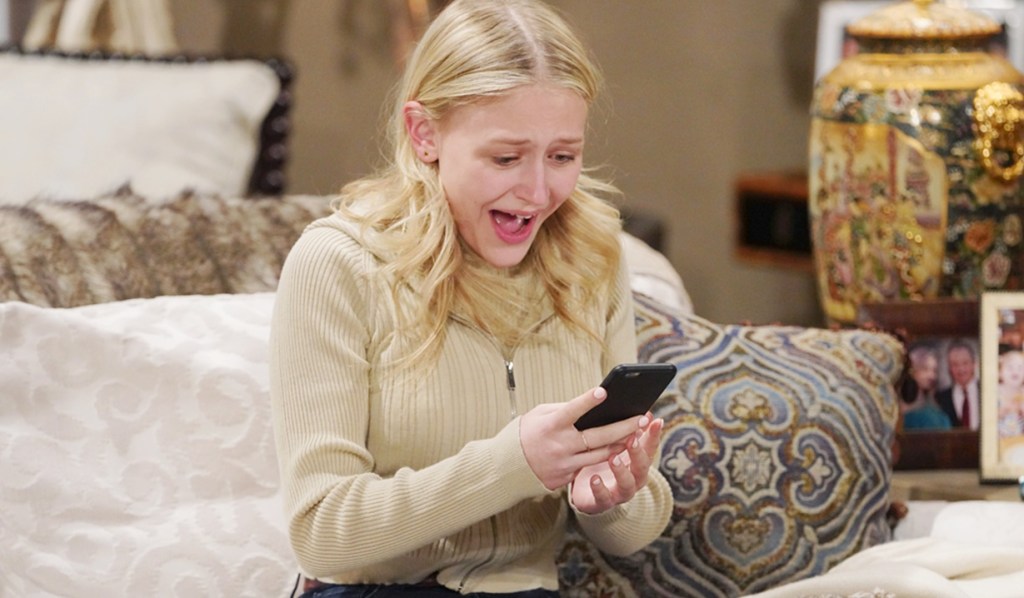 When Faith asks why he’s ghosting her, she’s told to check her social media. Her proclamation of love is posted there. Humiliated, Faith asks why he would do that. The texter responds, “Because I’m not Tommy and you fell for it, loser.” Faith sobs as the bully reveals herself to be Jordan who got sick of her whining and letting her parents run her life. Later, Nikki finds Faith crying and learns it was Jordan. “I don’t understand why she’d be so mean,” Faith sobs. Nikki fumes that she was clearly never her friend to begin with and advises Faith to leave her behind. She assures her granddaughter the pain will pass.

In Amanda’s suite, Naya explains to her daughter that her father is being accused of murder by a reporter and she wants her to defend him. Amanda asks why she would even consider doing such a thing. Naya reveals, “Because the man he’s accused of killing is your father.” Amanda’s stunned; she told her that her father was killed in a car crash after she was born. Naya confirms that he was; his name was Richard Nyland. Amanda becomes emotional, then asks why the reporter believes Sutton was behind the death. She adds she’s never tried a murder case. Naya knows she studied criminal law. Amanda points out if she took this on it would be impossible to hide her connection to the family. Naya, assuming Amanda will be thrilled, chirps that they won’t hide it anymore. Amanda’s floored; she was a dirty secret, and now here Naya is, ready to open the gates and let her in. 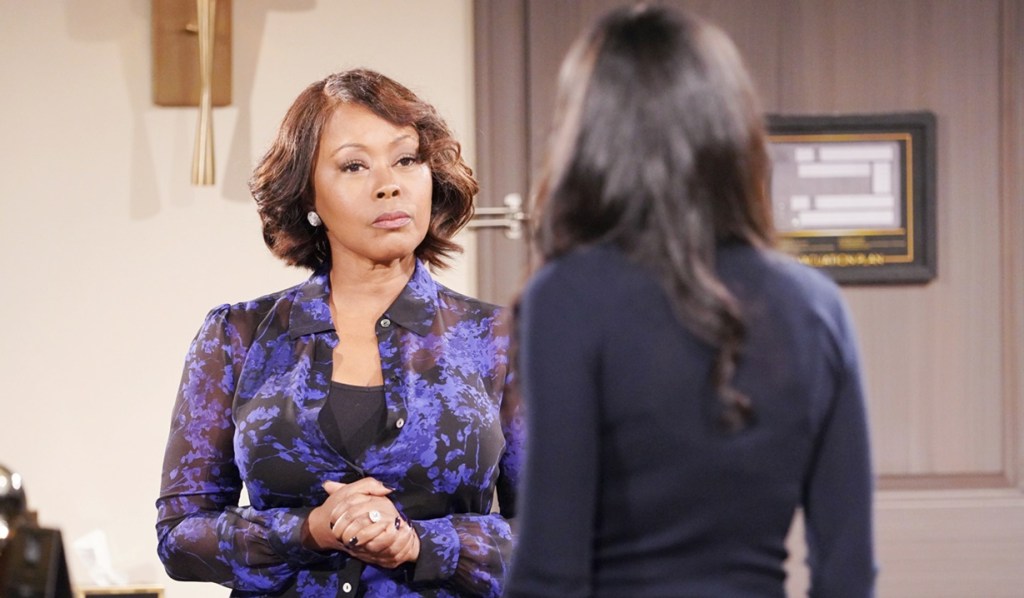 Naya exclaims that they want to bring her into the fold and onto their team. Amanda thinks she wants to use her as a PR stunt to make the jury see Sutton in a more sympathetic light. She reminds her Imani has a restraining order on her. Naya assures her it’s no longer in effect. She figured that Amanda would want to find the truth about Richard’s death and in the process get to know a family who would welcome her with open arms. Amanda gives her a cynical look. Naya admits she’s scared and desperate but she also saw this as a sign that Amanda found her for a reason; fate reunited them so they could fight this together as a family. Amanda hasn’t even heard the facts of the case and learns most of the details were kept from Naya. She warns her mother not to assume she’ll say yes.

More: How Naya’s emergency could have been soapier

Rey arrives at home and informs Sharon that he found a bottle of white powder containing thallium at Adam’s and the figurine and a tray in his car. Sharon’s stunned. Rey learns the mementos were things that Adam gave her. Sharon protests that she kept the figurine because it reminded her of her strength, but won’t tell him about the tray. Rey believes Adam tried to poison him. Sharon doesn’t know what to say. Rey asks her to tell him where Adam would run go if he ran.

In the hotel lobby, Naya asks if Amanda’s okay. Amanda admits it’s been a lot to take in; she’ll need time to think about this. Naya thanks her for giving it serious consideration. Regardless, she wants to continue to build their relationship. Amanda will be in touch. Naya exits and Devon, who’s been watching, approaches. “That looked pretty intense.” Amanda confirms that Naya told her some things that will take a while to process, but she doesn’t want to talk to him about it. Devon says he will always be there for her. Amanda nods and heads to the elevator. 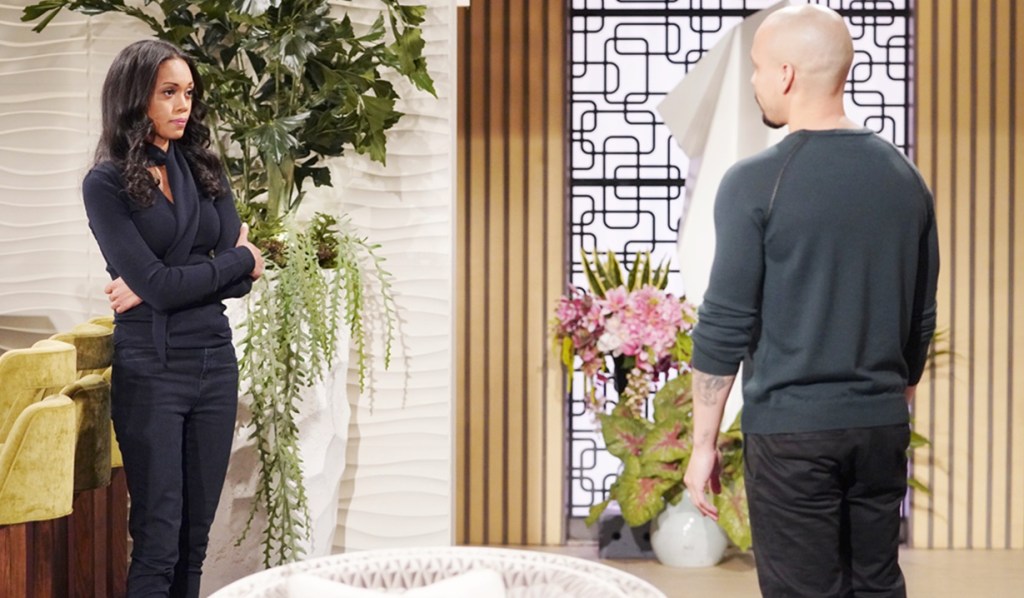 In the penthouse alone, Chelsea stews that the day Adam blew up in the cabin should have been the end of them. She’s angry about the time she’s wasted on him when he loved someone else; he’s broken her heart again. Chelsea tells herself that she’s finally going to be free of him to start her future with Connor. “There’s no turning back now.”

More: Will Kyle’s past come between him and Summer?

At the ranch, Faith convinces Nikki she’s okay, but when Nikki leaves the room, Faith goes to sob in the hallway. She then turns angry, storms over to the bar, takes a bottle of tequila and leaves the house.

Next on The Young and the Restless: Victor makes Chelsea a promise.

See photos of Faith over the years in the gallery below. Get your free daily soap-opera fix for The Young and the Restless — and all of the other daytime dramas — delivered straight to your email inbox by signing up for Soaps.com’s newsletter.

<p>Faith sits on the couch at home. She smiles while reading a book. </p>

<p>Nick looks on as Faith smiles with her hands on her hips. Faith may have won the floor game they were playing. </p>

<p>Faith and Sharon arrive at Chelsea’s place. Chelsea answers the door and is greeted with smiles all around. </p>

<p>Faith plays with what looks like a pillow in her shirt. However, she could very well be hiding something else in there. </p>

<p>Faith sits with her mother and baby Sully. While Sharon holds Sully, her daughter doesn’t look too happy and scowls. </p>

<p>Faith stands next to Sage’s photo at her funeral. In tears, she mourns her unexpected death.</p>

<p>Faith leans in to kiss her dad on Thanksgiving. Nick waits for the kiss while dressed as a pilgrim. </p>

<p>Faith and Nick celebrate New Year’s together. Wearing funny glasses and crowns, they wait to ring in the new year. </p>

<p>Faith sits on Nick’s lap. It appears they finished having a serious talk. </p>

<p>Faith and Mariah go camping and stare up at the stars. Both smile and possibly make a wish. </p>

<p>Everyone gathers around as Faith celebrates her birthday. She smiles at her mom, dad and Dylan as Aunt Vikki looks on. </p> 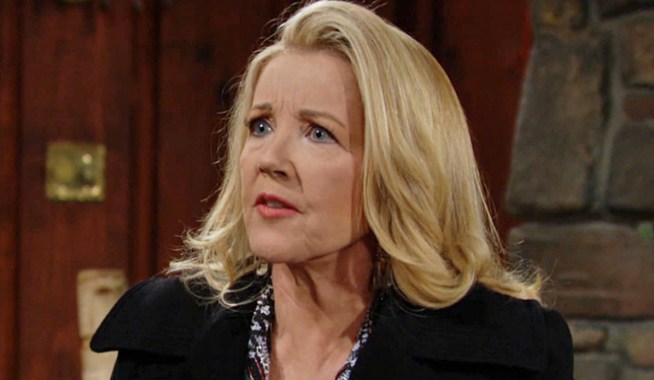 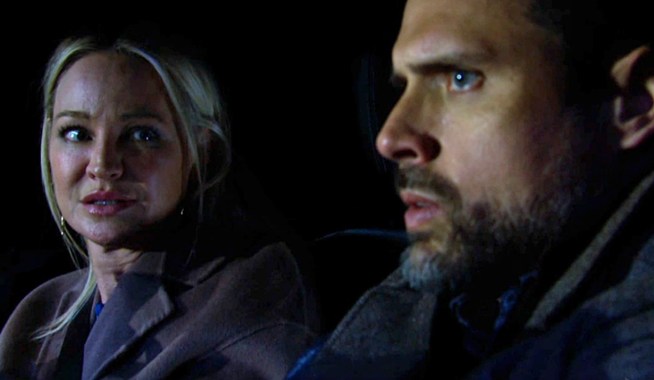