Sharon and Rey Learn Shocking Information About His Poisoning From Nate

Wednesday, March 24, 2021: Today on The Young and the Restless, Faith asks Phyllis for advice, Amanda receives a call for help, and Mariah and Tessa make a move. 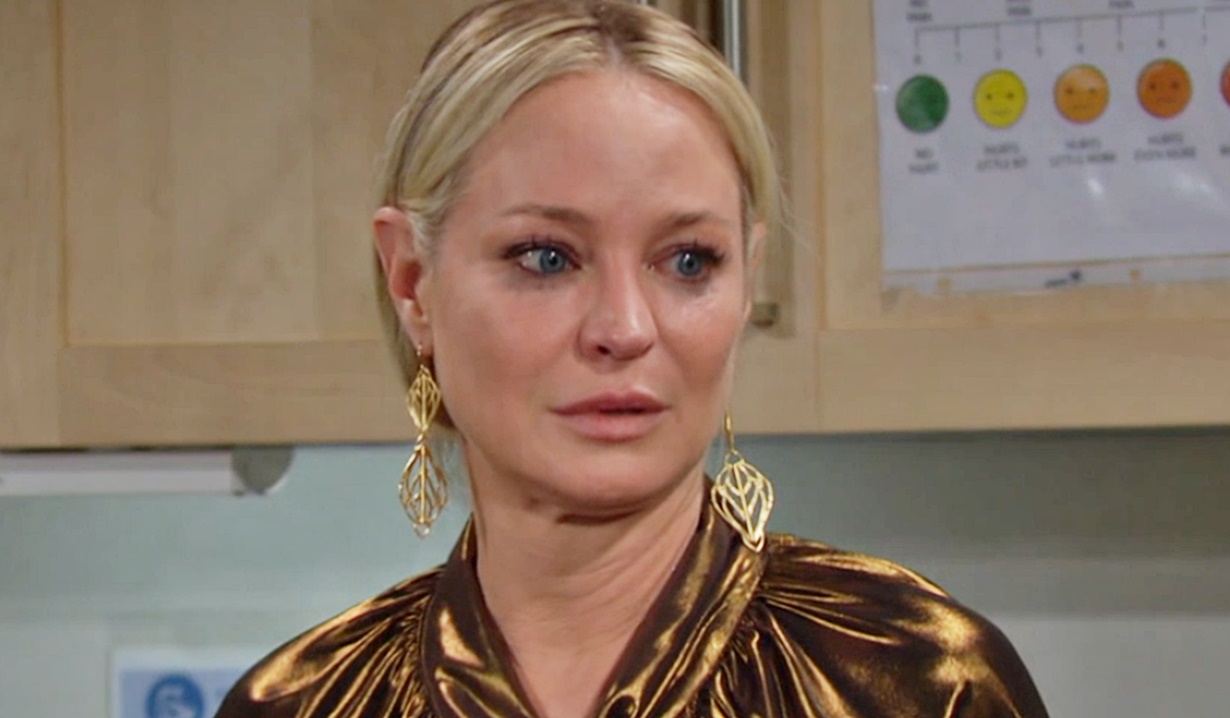 Tessa wheels a bunch of suitcases into the Chancellor mansion where she’s greeted by Abby and Nina. Mariah follows and they all tell her to save her strength for the pregnancy. Abby declares that this baby will be so loved… starting on day one!

In the coffee house, Nick assures a worried Faith that Rey will be okay. Faith counters that he’s still unconscious and mom’s so scared; there’s nothing they can do to help her.

More: Chapter 7 of our love story for Victoria

In Rey’s hospital room, Sharon gives her husband a pep talk and updates him on all his well wishes as she urges him to get well. She cries that he can’t leave her now; they’re supposed to be partners through good and bad. When she turns away, Rey awakens and says, “Forever.” 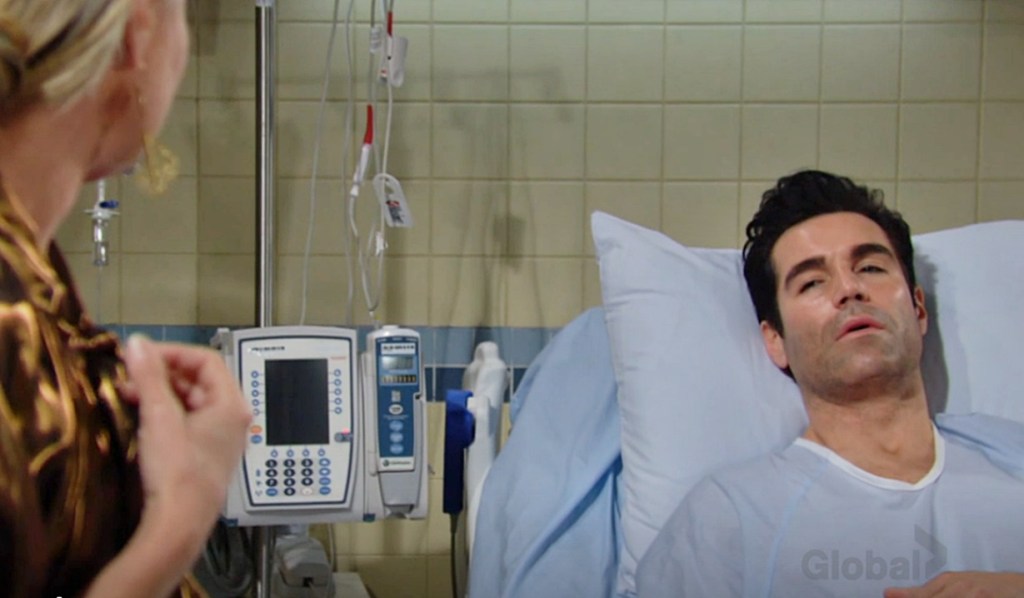 At the penthouse, Devon leaves Amanda a voicemail asking to talk; he doesn’t want this to be the end for them.

At the hotel, Amanda tells Phyllis that Devon left her a message but she’s not going to listen to it. She deletes it so she’s not tempted. Phyllis saw his heartfelt appeal to her at the hotel and questions if that didn’t get to Amanda — even a little bit? Amanda relays that her feelings are beside the point; she’s not listening to more excuses. Phyllis counsels against being stubborn and losing out on what you want as she once did. Amanda gets a call from Naya, who wants to see her and says it can’t wait. 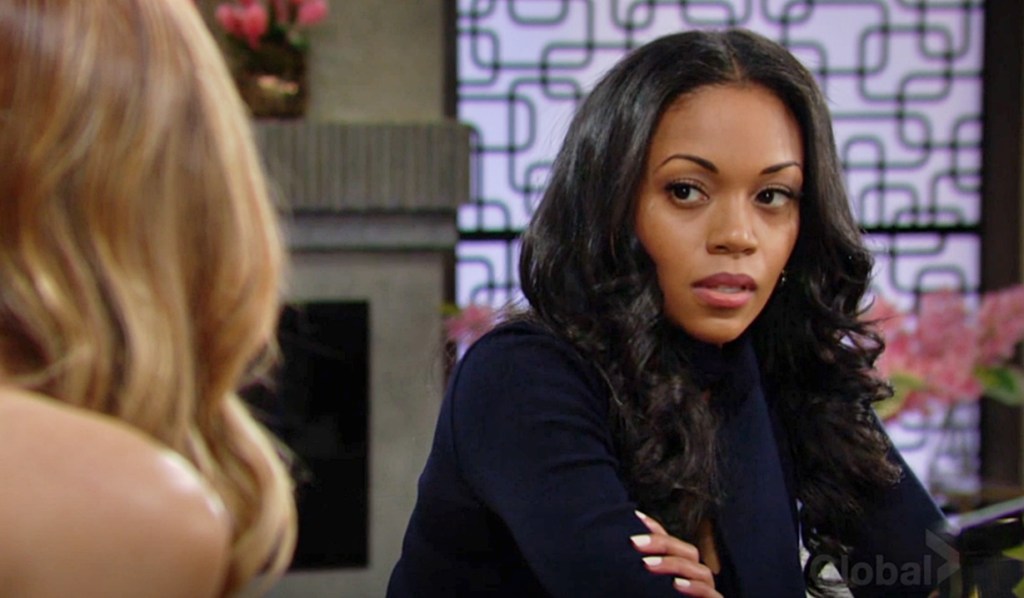 At Society, Lola’s going crazy worrying about her brother. Elena reassures her. Just then, Lola gets a message from Sharon that Rey’s awake.

In Crimson Lights, Faith gets a message from Sharon and tells Nick it’s the best news. After, they get to talking and Nick is glad she still loves him even though he’s been a little overbearing. Faith wants to be with him when she’s scared; he makes her feel safe. Nick senses she’s in a better place but pushes for therapy. Faith agrees; she’s finally ready.

At the Chancellor Estate, Mariah updates Tessa, Abby, and Nina on Rey’s status, and then opens a gift from Devon. It’s a penny for good luck today. Mariah will bring it to the appointment. Abby gushes that if everything goes as expected today all of their lives could be changing. Once alone, Mariah thanks Tessa for being so supportive that she’s willing to uproot their lives. Tessa feels Mariah’s the generous one in this scenario. Abby and Nina reappear with healthy snacks. Tessa and Nina head upstairs and Abby checks in with Mariah, who assures her she’s completely on board. Later, Mariah, Tessa, and Abby head out exclaiming, “Let’s get pregnant!” 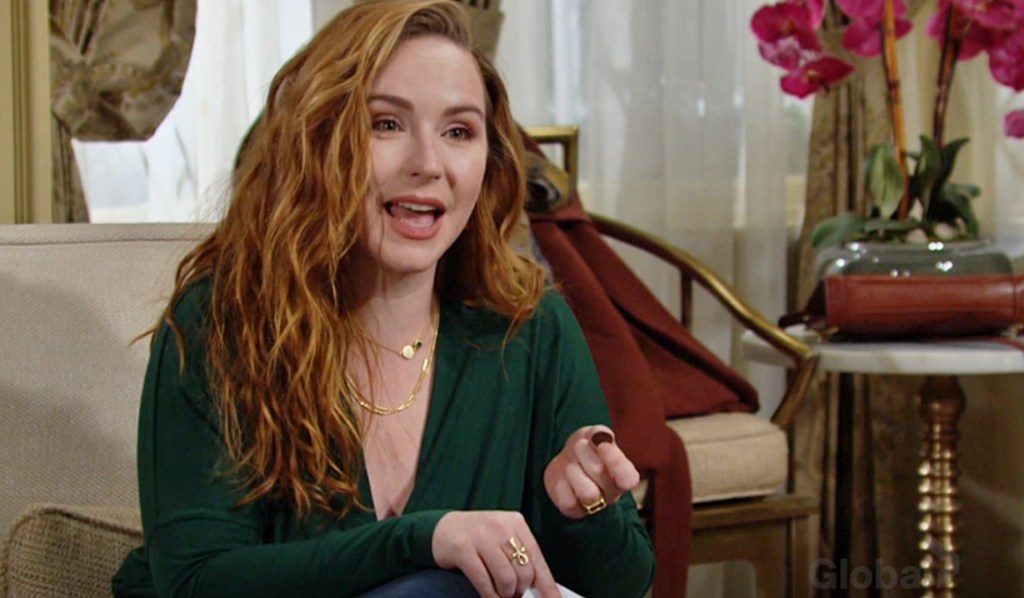 In the hospital, Rey learns he was given an antidote after being poisoned by thallium somehow. Nate wonders how it got into his system and asks some questions about whether he’s eaten shellfish or been exposed to toxins. Rey answers no on all fronts. Nate puzzles over how Rey was exposed and suggests having the other family members tested and the health department check the house. After Nate exits, Sharon suggests they call Rey’s family but he wants to talk to her. Sharon says his health scare was an eye-opener. He assures her he’s not going anywhere.

At the coffee house, Nate gets off the phone with the health department and spots Devon. He warns Amanda figured out what happened with him and Elena, but it didn’t come from him. They have a tense exchange about actions having consequences. Devon doesn’t want to be judged by Nate. Talk turns to Elena. Nate says she made her choices and he made his. Devon reminds Nate that Moses will soon be arriving to intern. Nate has his back. Devon’s grateful. 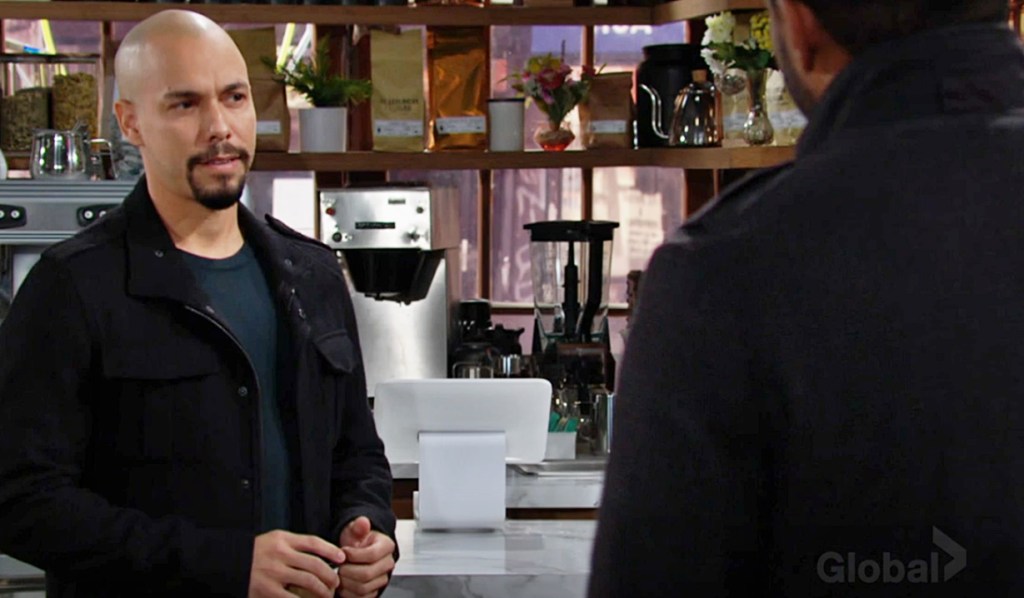 At the hotel, Faith goes on her phone while she waits for her spa appointment. Nick updates Phyllis on Rey. Phyllis is glad for Faith, who cares so much about him. In her chair, Faith’s anonymous texter asks if she’s enjoying her day off school and wonders if she’s up for playing a game. Nick watches and tells Phyllis she’s made a new friend and they’re both happy about it. Faith takes a call from Rey and Sharon, who update her on the necessary testing. Faith lets her mother know she’s ready to try therapy. Sharon tells her she’s brave.

After disconnecting from her mom, Faith approaches Phyllis to get advice on how to play video games. Phyllis obliges. Faith asks if she and her dad played video games on dates. Phyllis confirms that they did; it’s kind of their love language. Faith wonders how it feels to fall in love. Phyllis explains that at Faith’s age it’s magical and terrifying all at the same time. Nick reappears and smiles as he listens to Phyllis counsel Faith never to lose to a boy at video games on purpose. “Just beat him.” Faith retreats to her chair and Phyllis tells Nick that his daughter may be interested in a boy. Nick groans. 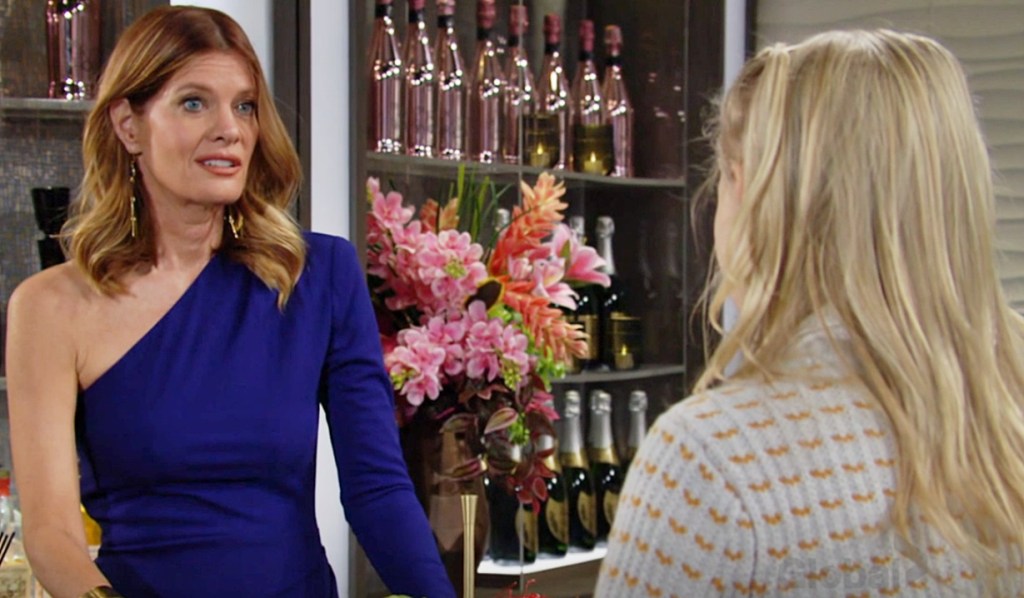 At the hospital, Sharon disconnects from Faith as Nate walks in. He has troubling news — about how much poison was found in their house… and where. It was found in all of the men’s body wash and shampoo products. Rey realizes he was targeted. “Someone poisoned me.” 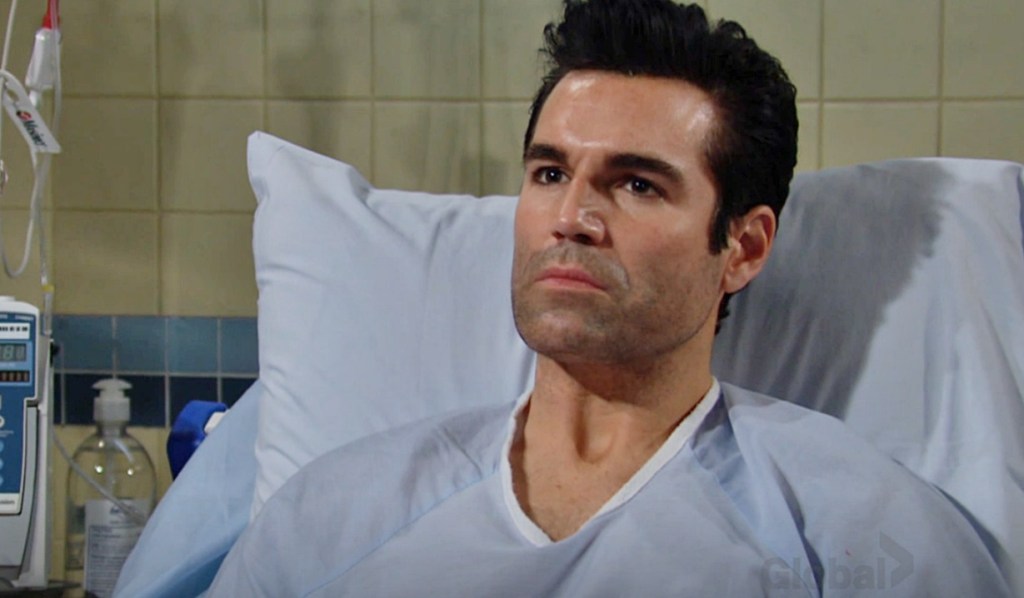 At Society, Lola wonders why Elena down played her own role in saving Rey’s life. Elena explains Nate deserves most of the credit; in fact, he deserves credit for even talking to her. She laments ruining things with two incredible guys. Lola wants her to move on and insists they have a girls’ night out. 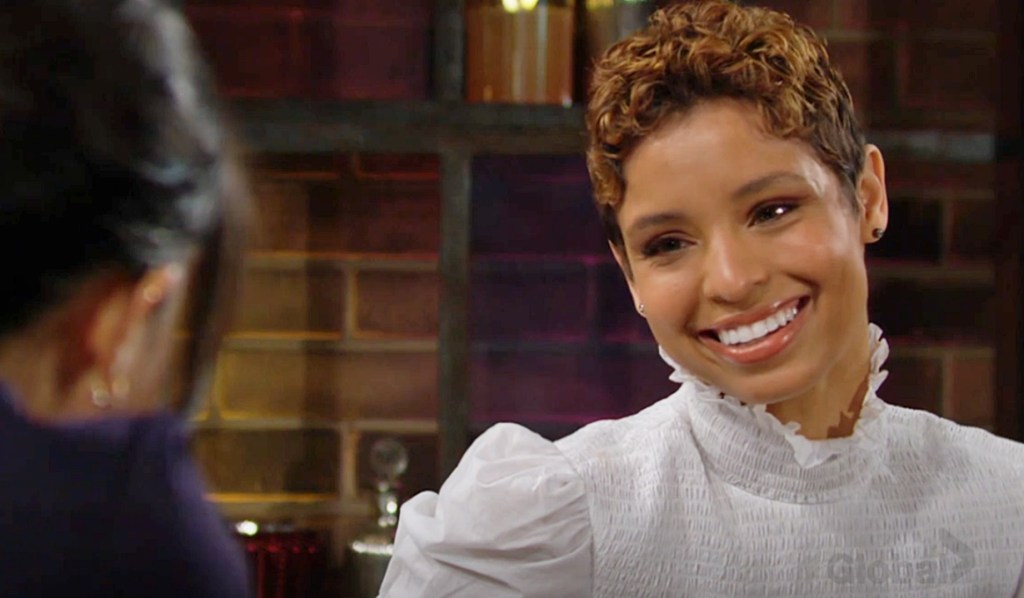 Amanda’s upset when Devon shows up at her suite. He tells her he’s truly sorry; the only thing he can do is to try and makes things right. “Will you hear me out?” Amanda can’t do this right now — her mother is on the way. Naya appears and Devon goes, promising to call. Amanda just shakes her head at him. Once alone, Naya tells Amanda, “My family is in trouble. We need your help.” 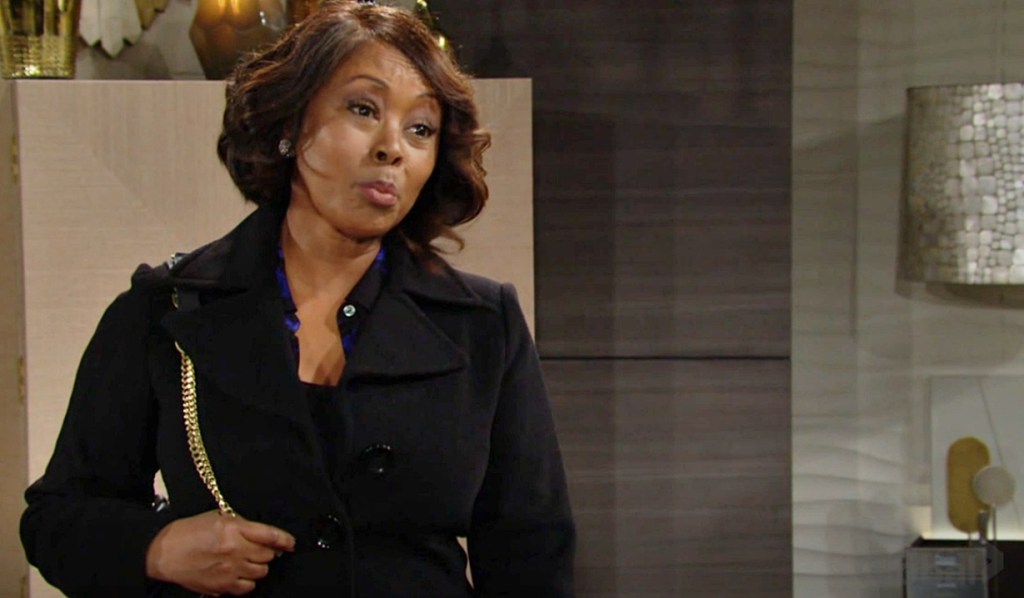 More: Will Tara come between Kyle and Summer?

Tessa, Abby and Mariah return to the Chancellor mansion, where Mariah quips, “Am I showing yet?” She feels like they might have just created a life and looks forward to the blood test in nine days. Abby says it will be the longest nine days of her life.

Next on The Young and the Restless: Nick gives Sharon a dose of tough love.

Relive Mariah and Tessa’s love story in the photo gallery below. Get your free daily soap-opera fix for The Young and the Restless — and all of the other daytime dramas — delivered straight to your email inbox by signing up for Soaps.com’s newsletter.

Sally Pushes Kyle's Buttons After a...

Nikki Tears Into Sharon After She...