Tuesday, March 23, 2021: Today on The Young and the Restless, Elena and Nate diagnose Rey, Phyllis pushes Summer to spill, and Adam becomes suspicious. 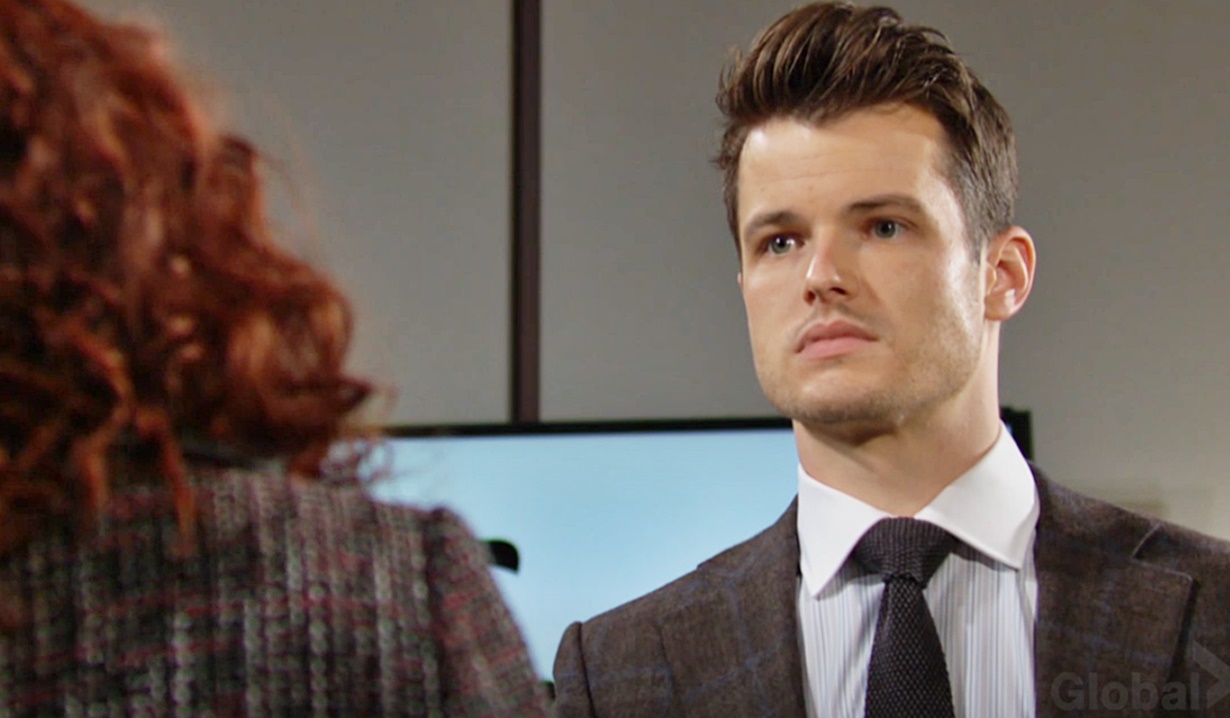 In the hospital, Sharon frets as Rey mutters deliriously in his sleep. Nate appears and reassures her before urging her to take care of herself. He suggests she join him for a coffee and some fresh air. Sharon agrees and flashes to telling Rey she wants to make things right before exiting.

Chloe lets herself into the penthouse with a key and calls out, “Meredith?” Chelsea appears, walking, and Chloe confirms she was able to do what she asked. She’s not thrilled about doing something shady again but helping Chelsea get away from Adam is her dream come true. Chelsea thanks her for having her back. She’s planned this thing down to the smallest detail and the only person who will suffer consequences is Adam. She’s removing him from her equation and then she’ll reveal her recovery and start a new life with Connor. 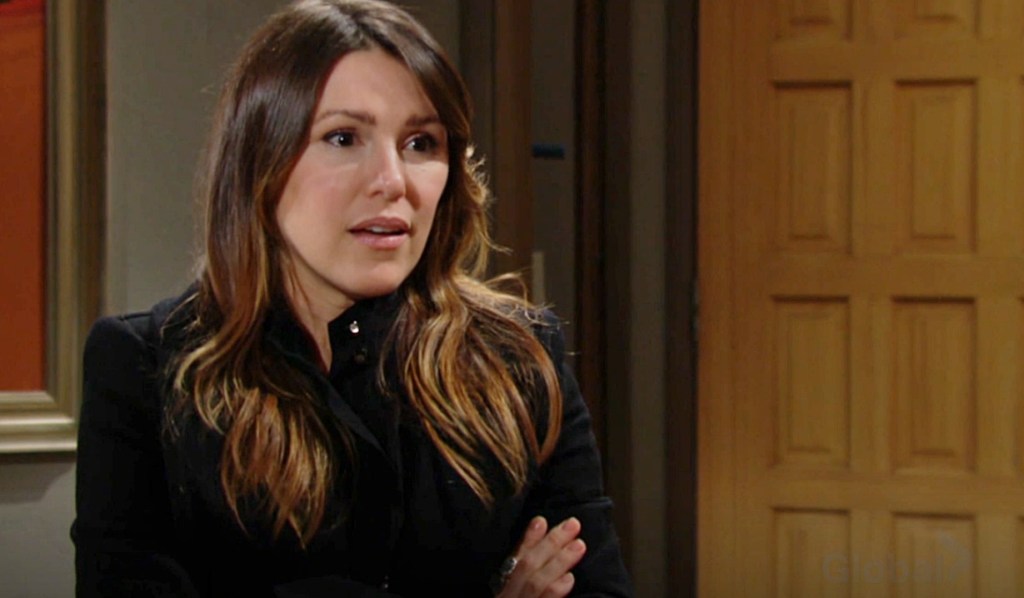 On the coffeehouse patio, Adam reads and re-reads the texts between him and Sharon that he didn’t send. He starts typing that he has no idea about the texts when she appears with Nate. Adam begins to approach but she raises her hand to stop him. Sharon gets a text from Faith and doesn’t know what to tell her about Rey. Nate assures her they’ll soon get a diagnosis; the trick is to find out where Rey’s leg pains intersect with his symptoms. 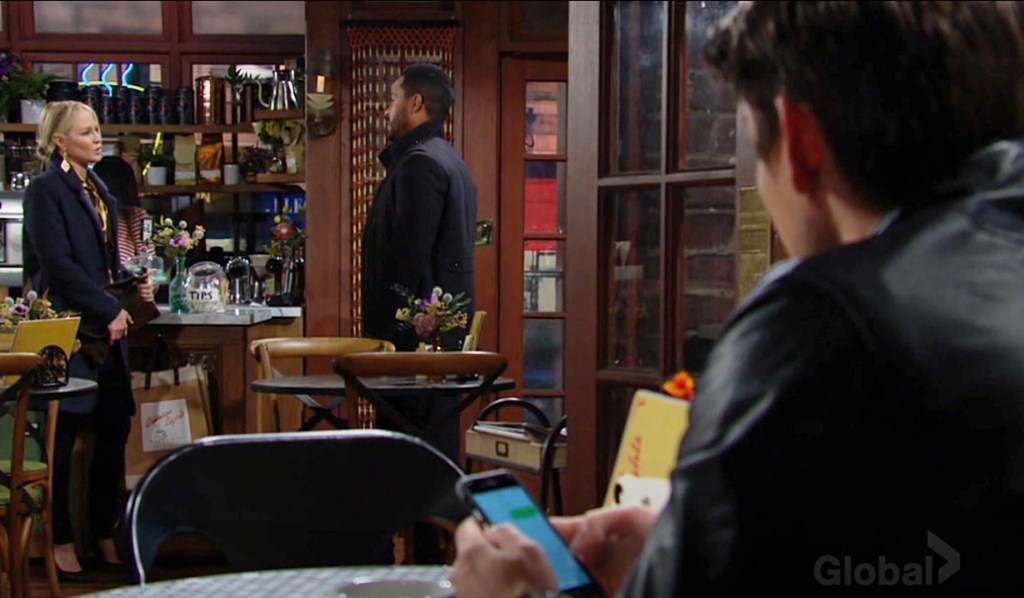 At Jabot, Jack gets a text from Phyllis who keeps pressing him to meet with her. Sally stops in with coffee so he ignores Phyllis’ messages.

At the hotel, Phyllis is stressing over Jack when she spots Summer and asks her to get more dirt on Sally. Summer reminds her mother they called a truce. Phyllis thinks there’s more to the story of Kyle’s affair. “You’re holding something back. Spill it now.” Realizing that Phyllis won’t stop, Summer confides that the woman involved is Ashland Locke’s wife, Tara. Phyllis met him earlier and believes he’s dangerous. Summer warns she cannot use what they found out about Sally in California against her or Locke will go after everyone Kyle cares about. 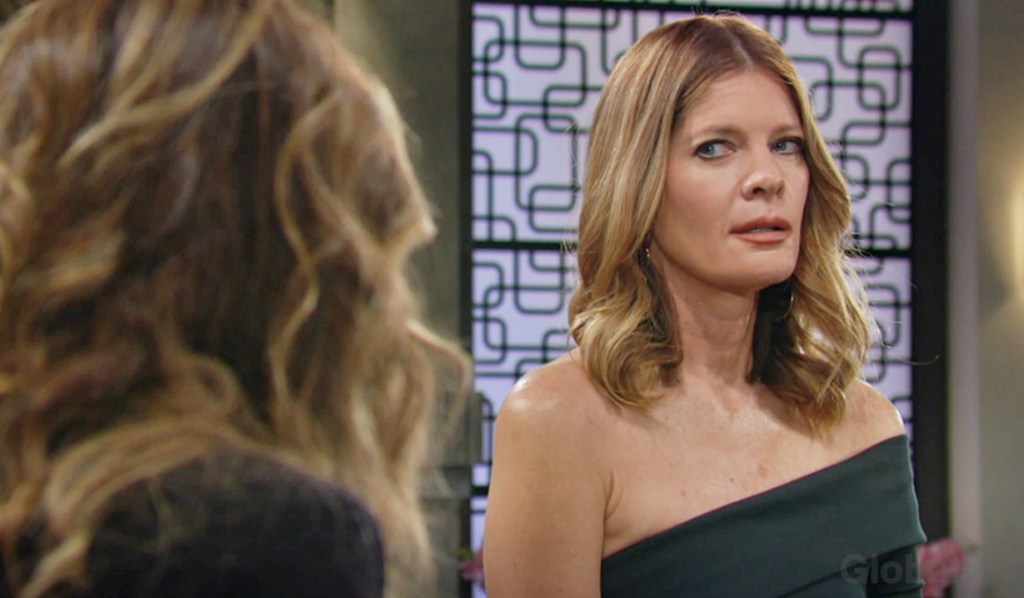 Lola sits with Rey in the hospital and recalls when she was there for her liver transplant. She gives him a message from their mom and urges him to please get better. Elena enters the room and reassures her roommate that Nate will solve this. Lola doubts it would be food poisoning and mentions the shooting pain like fire in his legs. This twigs something for Elena who asks, “Do you know where Nate is?” 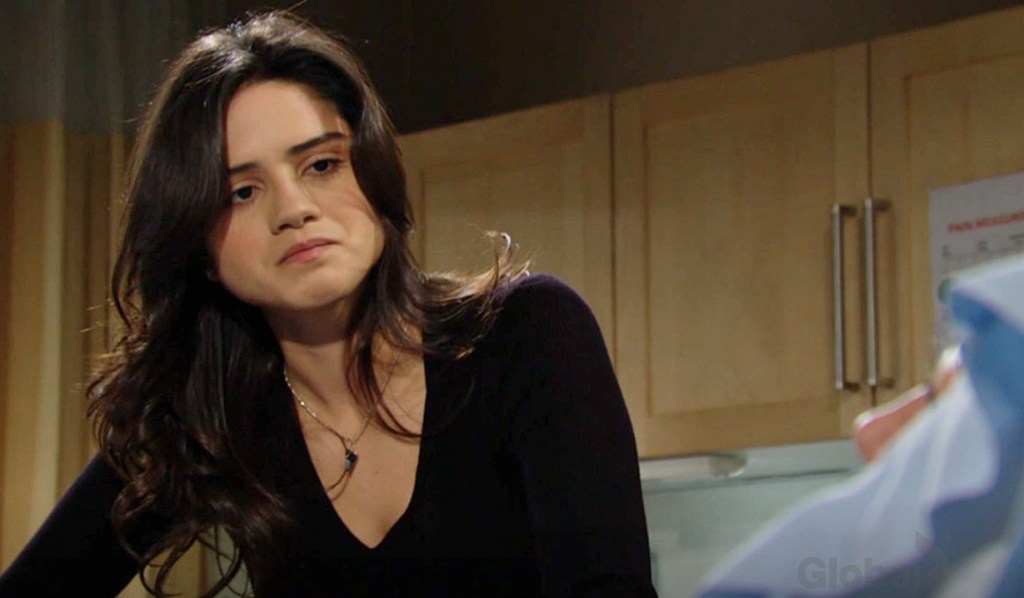 In Jabot’s boardroom, Kyle gets a call from Tara, who warns that Ashland was quiet all the way home to New York and may be suspicious. He assures her she’s over-thinking it; they don’t have anything to worry about. After disconnecting, Kyle flashes to Tara telling him if her husband finds out he’ll crush both of them. Jack enters and asks if everything’s alright. Kyle insists he’s fine but his dad’s not buying it. Kyle snaps at him and Jack’s jaw drops. Sally appears; Lauren needs to see Jack. 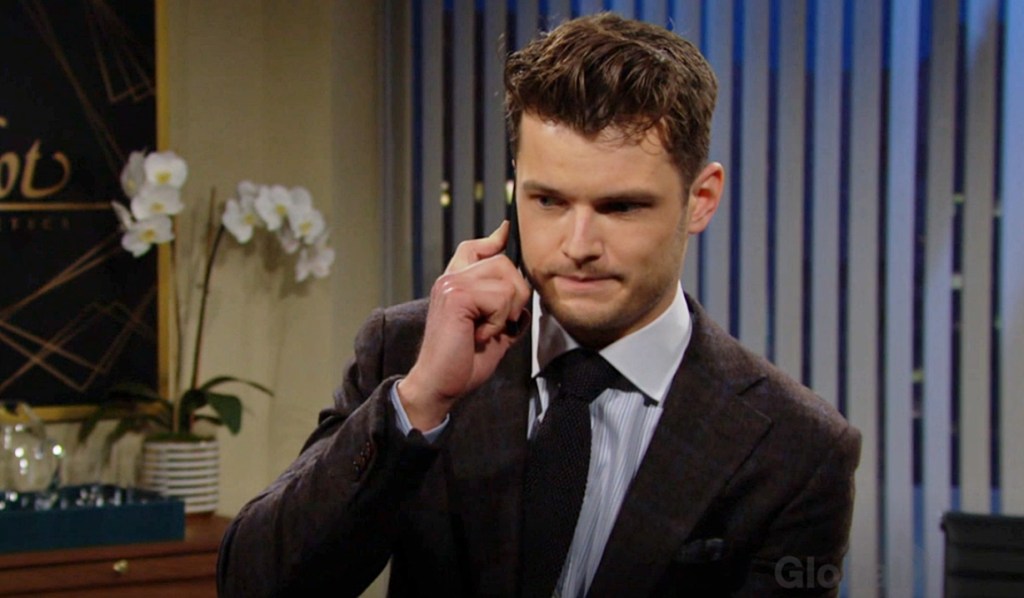 Once alone with Kyle, Sally asks what just went down. Kyle snarls that it’s not her business. Sally advises him to dial down the hate; she’s not going anywhere. Kyle knows her too well to trust her with his dad and accuses her of wanting his money and power. Sally says he’s wrong and explains why she’s attracted to Jack. Kyle’s heard more believable science fiction. Sally points out Tara was connected to a man with money and power, but that’s not why Kyle was interested in her. She needles that if Tara had been available Kyle would still be with her. She croons, “Kyle, Tara, and baby makes three.” Kyle barks, “That’s enough!” Sally knows he’s thought about this while laying next to Summer; she hit a nerve. Kyle fumes that she’s playing with fire. Sally advises him to leave her and Jack alone and get his own chaos in order. 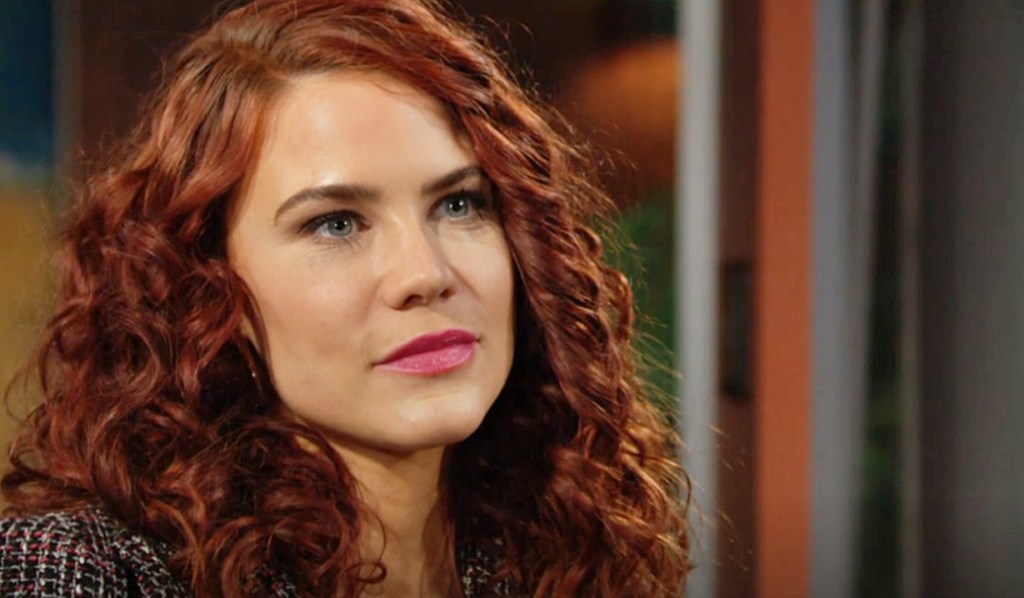 Elena finds Nate at Crimson Lights while Sharon’s on the phone with Faith. She tells her ex that Rey has been poisoned. Nate just reached the same conclusion and they both blurt, “Thallium.” Nate expects the lab will confirm it. He thanks Elena for being so helpful and they break the news to Sharon. She’s stunned and worries if she and Faith might have been exposed. Nate gets confirmation from the lab and relays he’s arranged for the antidote to come from Chicago. When Nate and Sharon leave, Elena calls Lola with the update. 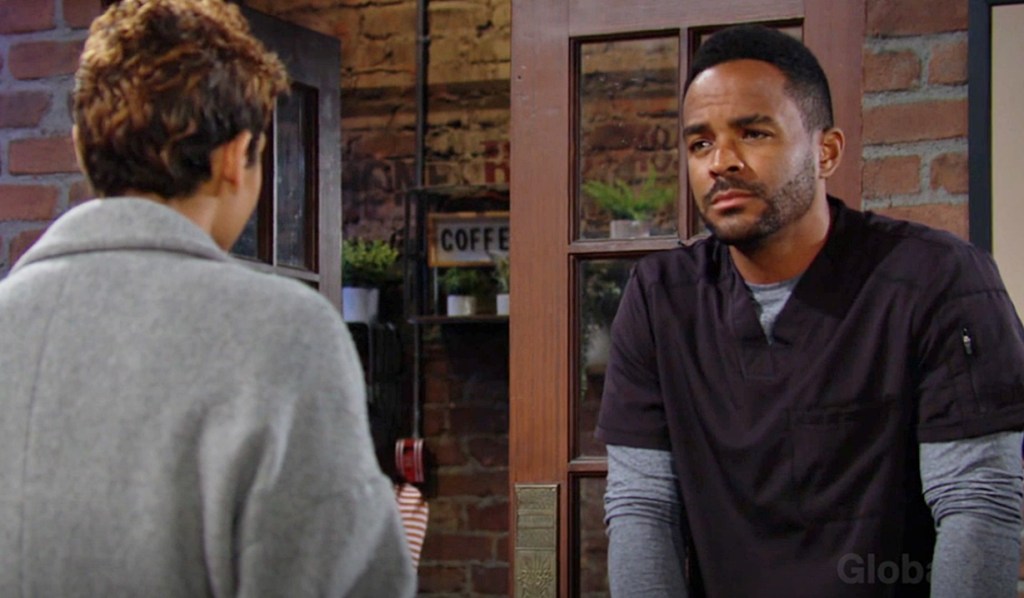 Adam enters the penthouse and Chelsea stops talking to Chloe abruptly. Chloe leaves and Adam tells Chelsea someone is sending texts to Sharon from his phone. He didn’t do it and needs her to know that. Chelsea blinks to indicate she believes him. Adam muses that someone is messing with him… the question is who? He had the phone with him at the time of the texts and wonders if he was hacked. But who would do that… and why? Chelsea snarks to herself about his staggering lack of self-awareness.

More: Why Chelsea is *villain goals*

Adam’s eyes fall to his tablet. He checks it and realizes it’s synced with his phone. “Has Chloe been anywhere near this thing?” Chelsea blinks, “No.” Adam muses that the culprit would have to have access to his life and devices. Chelsea thinks, “You can’t even bring yourself to say it because is just can’t be possible, can it?” Adam continues that it has to be someone who knows Sharon is an issue for them. He asks if Chelsea has any idea who could have done this and reflects that her recovery should be much further along. “Is it possible that you are the one..?” He stops, shakes his head, and then apologizes. 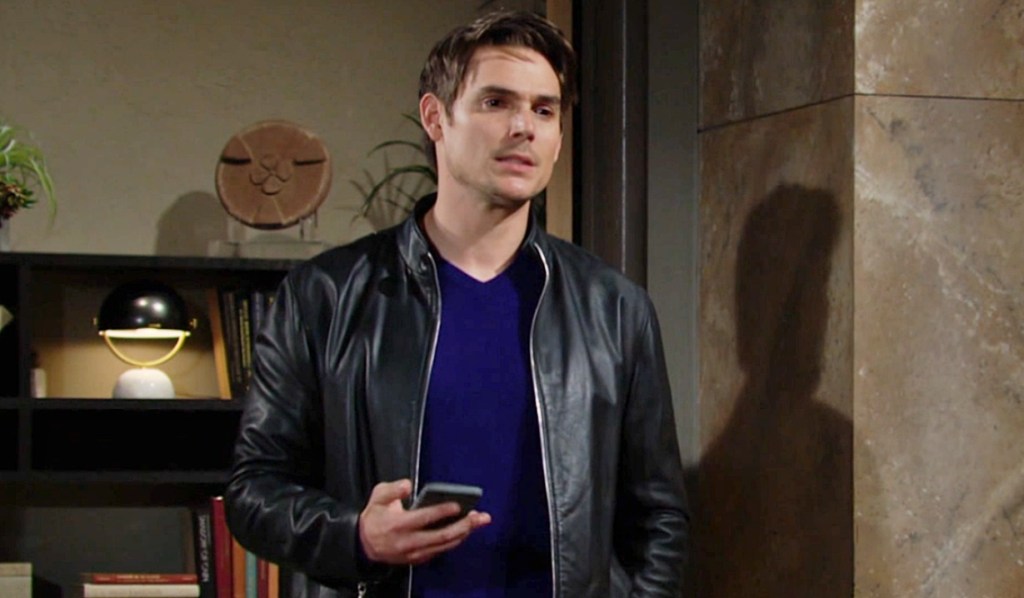 At the hospital, Nate updates Sharon that the antidote should arrive soon. Sharon worries Rey could have died; she failed him. Nate reassures her. Sharon wonders how he got poisoned and how long it’s been going on. She tells Rey to hang on for the antidote.

At the Grand Phoenix, Phyllis is looking up Ashland Locke online when Jack barrels in. “You want to talk? Talk.” She complains about him not responding to her many texts, then irritates him by saying the issue has worked itself out. Since he’s there, Jack asks if Summer opened up to Phyllis about what’s going on with Kyle. Phyllis quickly responds in the negative. Sally appears and Jack leaves with her. 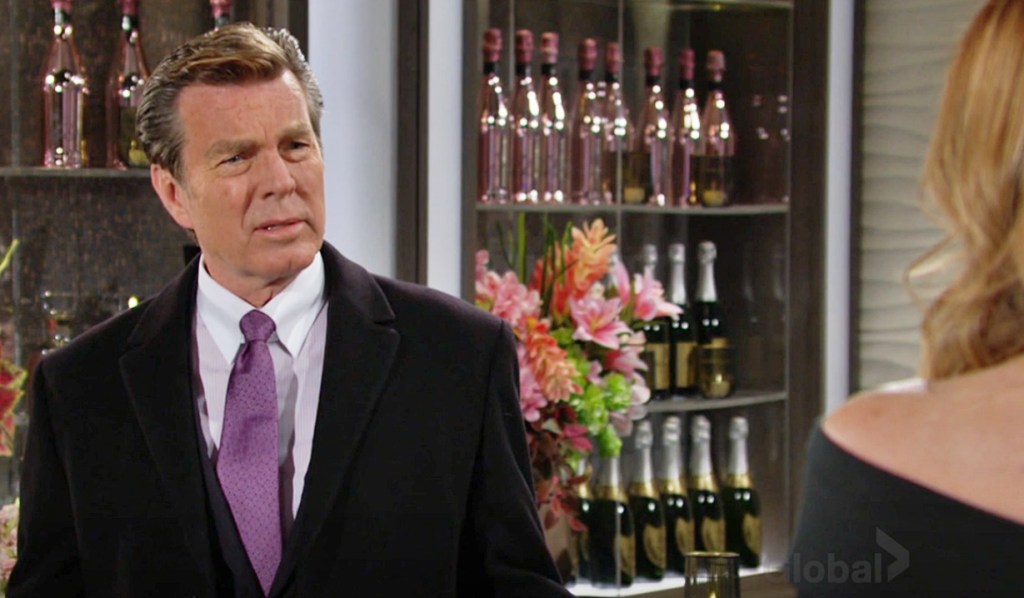 At Jabot, Kyle updates Summer on Tara’s phone call. Suddenly, his phone rings — it’s a New York area code. He answers and is asked to hold for Ashland Locke…

Next on The Young and the Restless: Mariah and Tessa begin a new chapter.

See photos of Victor Newman’s marriages in the photo gallery below. Get your free daily soap-opera fix for The Young and the Restless — and all of the other daytime dramas — delivered straight to your email inbox by signing up for Soaps.com’s newsletter. 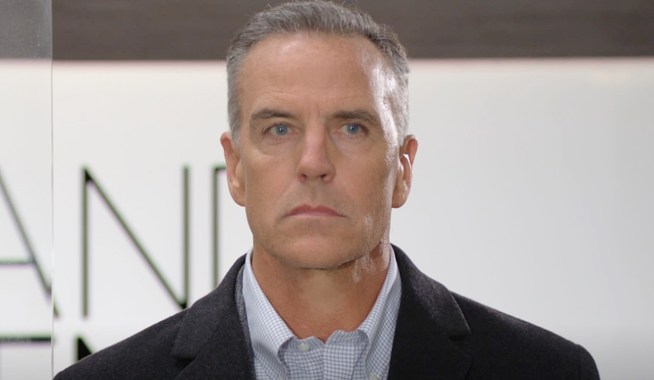 Sharon and Rey Learn Shocking Information About His Poisoning From Nate 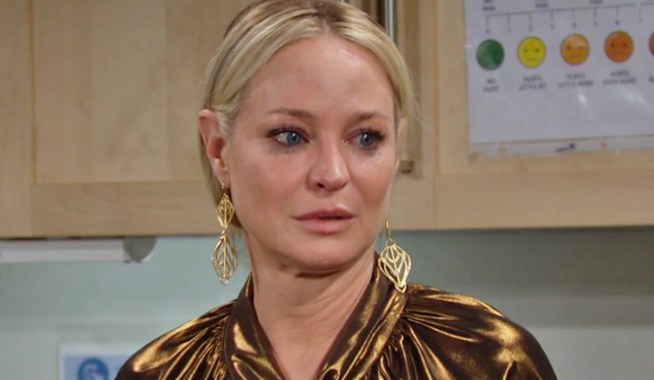