Jack Squares Off With Phyllis After Receiving a Warning From Lauren

Thursday, March 4, 2021: Today on The Young and the Restless, Summer finds herself at a crossroads, Nina nixes Abby's idea, and Elena lays her cards on the table. 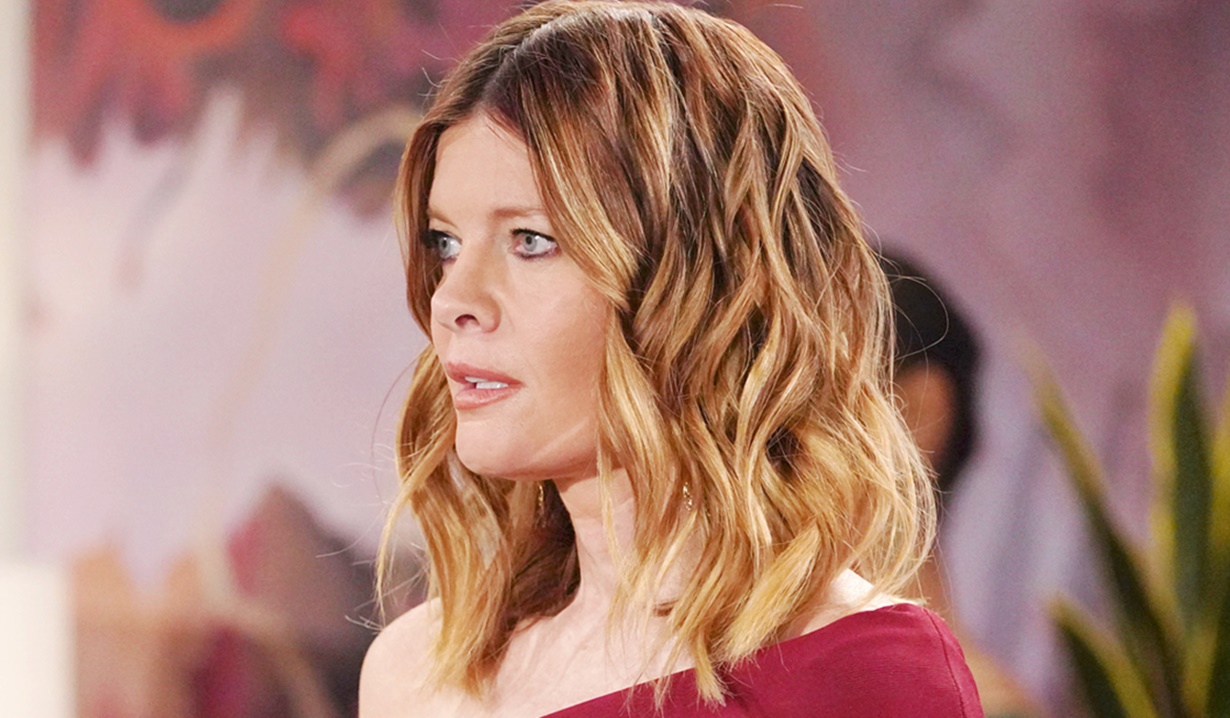 At Jabot, Summer marvels that Kyle’s a father and immediately wants to know when he found out about it. Kyle hedges, “Not long ago.” Summer realizes he waited for confirmation before telling her; it’s why he was going to New York. Sally walks in and Summer tells her the boardroom is all hers. She stalks out with Kyle behind her.

Jack joins Sally, who has a present for him — it’s a trendy suit jacket in his size. She coaxes him to try it on and lose his tie. She proclaims it’s drop dead gorgeous and urges him to keep it on. They make plans for dinner at his place later. Lauren enters and enthuses about Sally’s latest ideas. After Sally goes, Lauren closes the door and warns Jack that Phyllis is concerned about his friendship with Sally. Jack doesn’t care about her opinion. Lauren explains she found out Sally did extensive research on his family. Jack assures Lauren he’s going into whatever this is with his eyes open. Lauren thinks Sally has great taste… and not just in clothes. 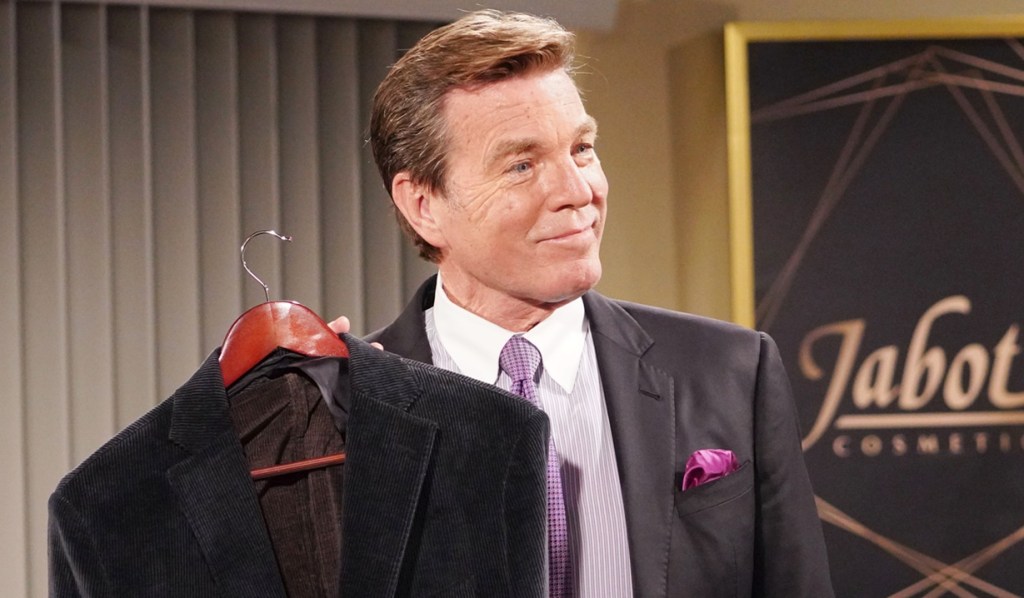 At the Chancellor Estate, Abby and Nina update Christine that thanks to the letter she brought her from Chance they’ve moved forward with the surrogacy. She plans to inform Jill over video chat. Ashley arrives to join the gathering. Christine goes over the contracts for Devon and Mariah, but warns it’s a complicated situation no matter how close they are. Abby wants to ask Mariah and Tessa to move in during the pregnancy. Ash thinks it’s a lovely idea but Nina disagrees. Christine advises Abby to call when she decides and leaves. 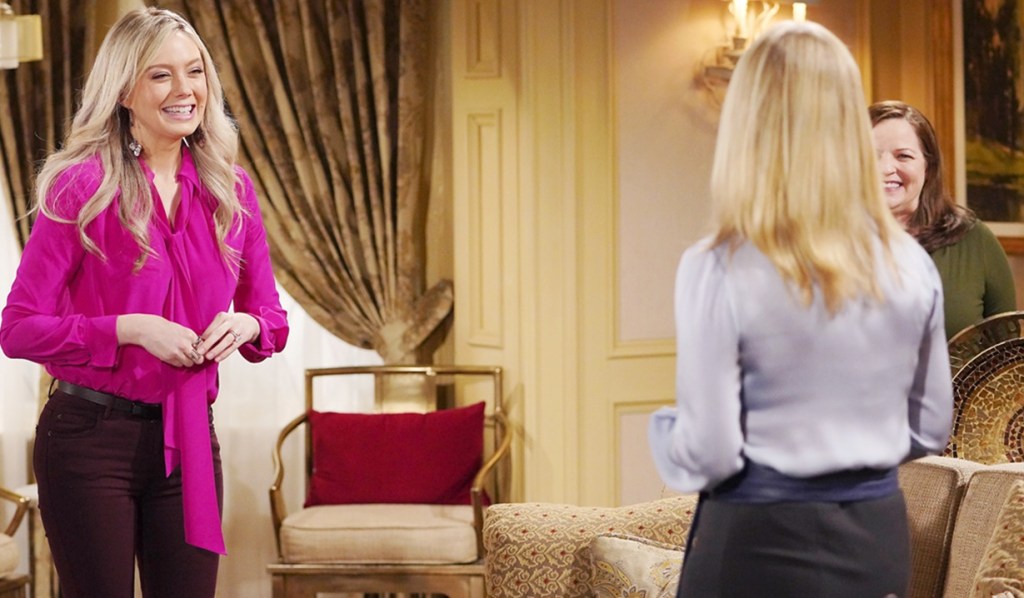 Nina explains she’s concerned about Mariah living there if something going wrong with the pregnancy. Jill calls in and wants to know everything. When they get to Mariah and Tessa moving in, Jill pronounces it a terrible idea. The house isn’t as big as it seems. Abby relays Nina’s concerns, but feels no one can protect her from possible heartache; she wants to be there for Mariah. They’re all in this together. Ash and Nina agree. Jill muses that maybe Mariah and Tessa won’t be as annoying as Esther.

More: Can Adam win Faith over?

At Grand Phoenix, Amanda finds Nate deep in thought. She asks about him and Elena. Nate deflects; he’s been pretty busy. Amanda shares what she and Devon have been up to, and he notes they’re getting close. Amanda confides they’re taking it slow, but she’s really glad they connected. Between Devon and her birth mother she can’t believe how well things have been going… she’s almost waiting for the other shoe to drop. As Nate prepares to leave, Amanda offers to listen if he ever wants to talk about what’s bothering him. Nate says listening to her talk about moving on has convinced him to do the same. 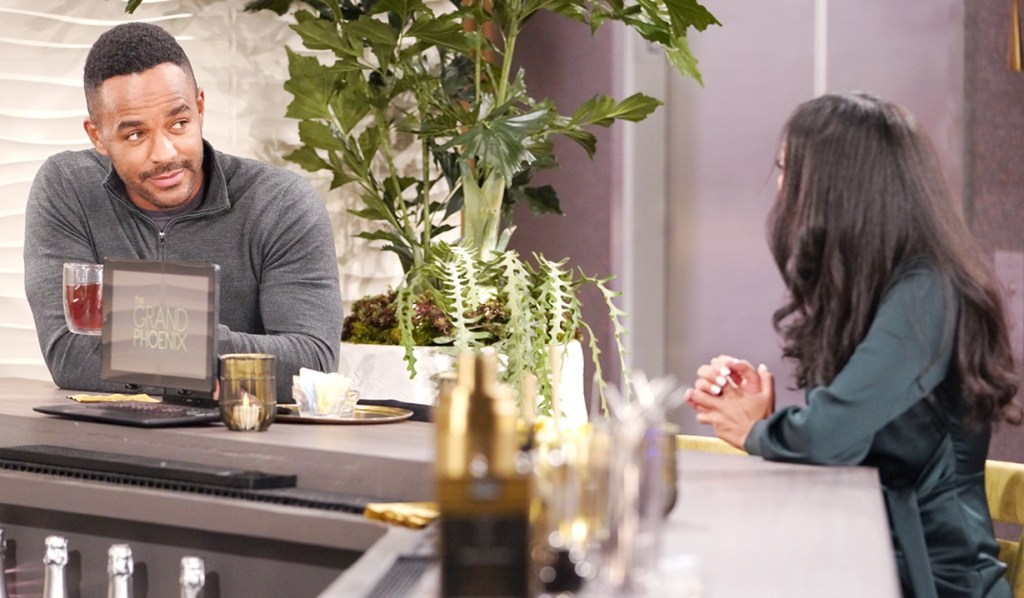 At Crimson Lights, Devon spots Elena by herself. They chat. He hopes she and Nate can work things out. Talk turns to Amanda, and Devon confirms she doesn’t suspect what happened between them. Elena’s sure Nate won’t tell her. She explains Nate’s waiting for her to say Devon’s out of her system, but she’s not sure that’s true. They establish that neither of them has been able to get their night together out of their heads. Devon has something special with Amanda, which is why this is so complicated. 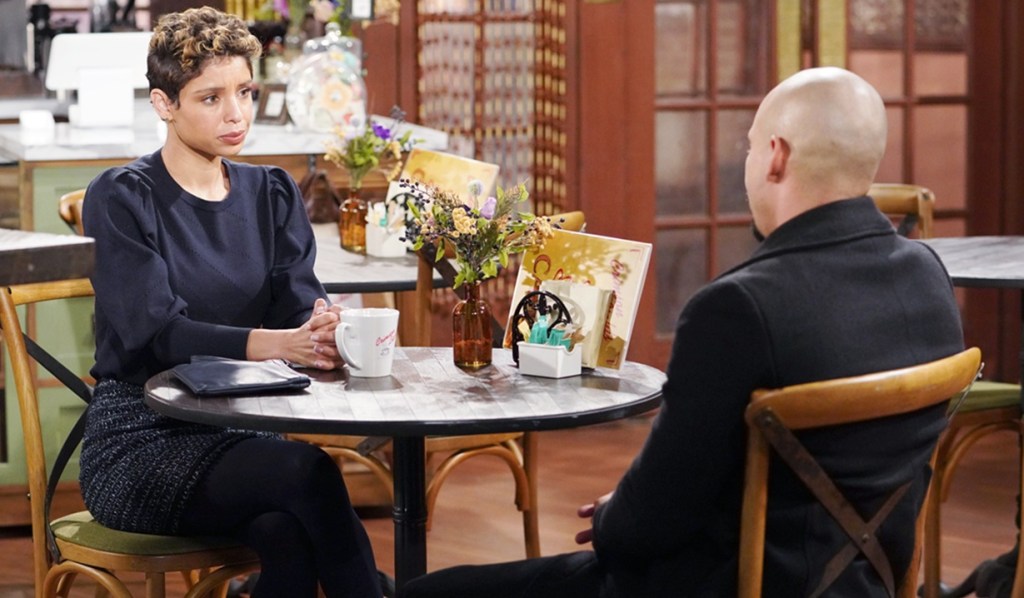 Amanda arrives at the coffeehouse, and Elena leaves. Devon and Amanda discuss his baby contract. She tells him he’s a good man. Talk turns to Elena and Nate’s troubles. Amanda feels sometimes these things are complicated to resolve. Devon muses, “Yeah, sometimes they are.” 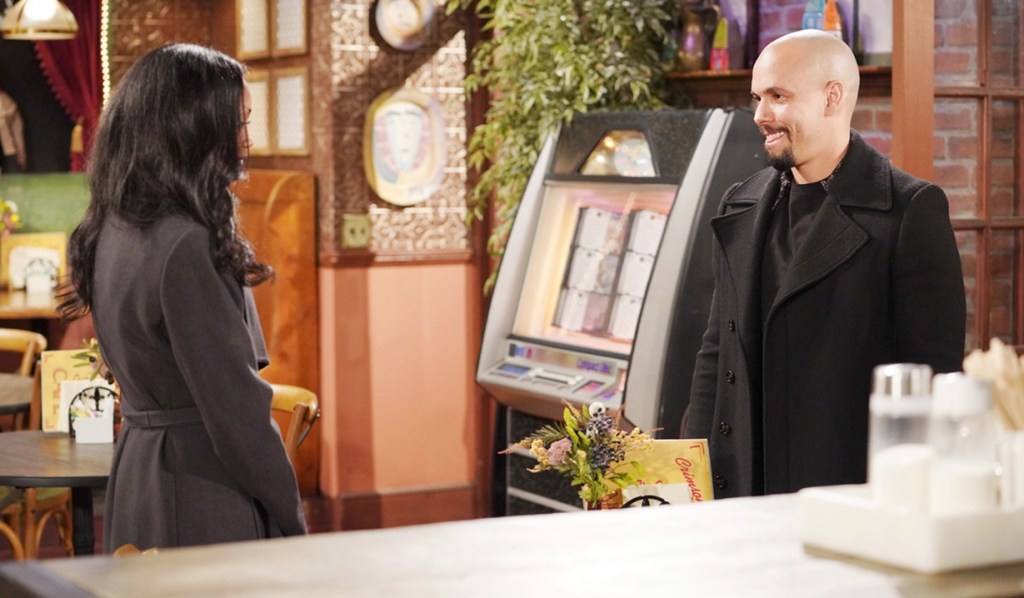 In their suite, Summer asks if the boy on Kyle’s laptop is his son. Kyle confirms he is, and protests that he waited to tell her due to his fears about Ashland coming after those he loves or even rejecting the boy. Kyle thinks Theo will keep quiet but confesses someone else knows — Mariah. Summer’s agog that he told his friend before her. She then learns Tara came to Genoa City and confirmed Harrison was his — but wants him to let it go. Summer asks, “What do you want?” Kyle figures he’ll have to carry on like this never happened, but Summer urges him to keep an open mind. Kyle tells Summer she’s incredible. Summer feels for him. He asks where this leaves them. Summer sighs, “It’s a lot to take in. I need time to think.” 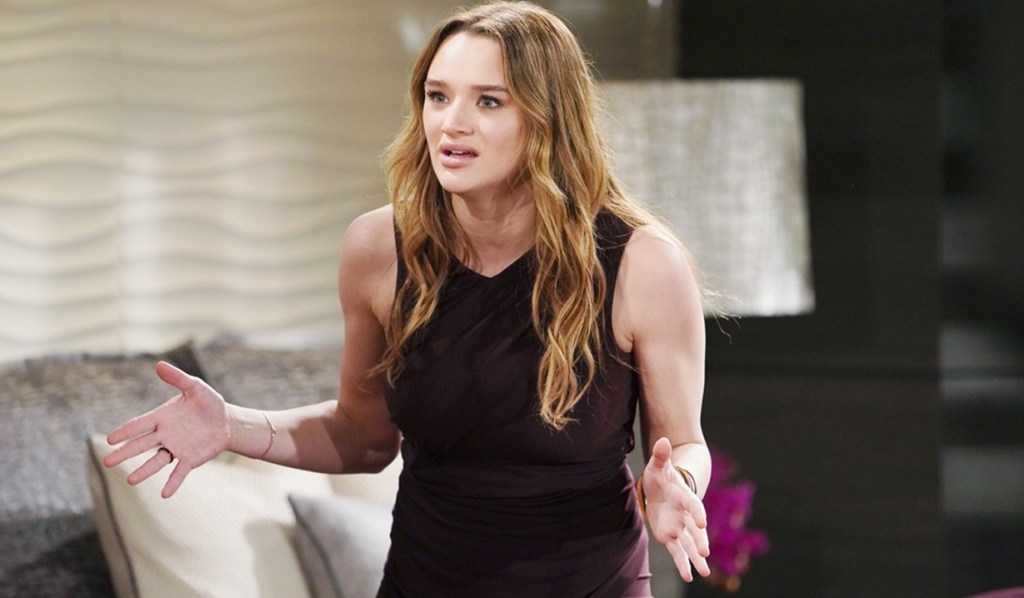 In the hotel lobby, Summer confirms to Phyllis that there’s definitely more to Kyle’s story about New York; his connection to his ex is much deeper than she thought and there’s no telling what the vindictive husband will do if he finds out how serious it was. Summer’s explains Kyle didn’t tell her sooner because he was afraid of scaring her off. Phyllis can understand that, but points out how happy they’ve been. Summer agrees; she needs to hold onto her relationship. She hopes Sally will stay in her lane.

At Society’s bar, Sally finds Kyle drinking alone. Kyle snaps, “Don’t start Sally.” She wonders if the truth came out. Kyle fumes that she doesn’t need to worry about him and Summer. Sally is there to get cookies to bring to Jack’s. Kyle wants her to stay away from his father. He’s been hurt by women like him before. Sally’s upset by the insinuation she’s a gold-digger; she thought they had an understanding. Kyle’s protective of his dad. She truly enjoys Jack’s company and the feeling is mutual. 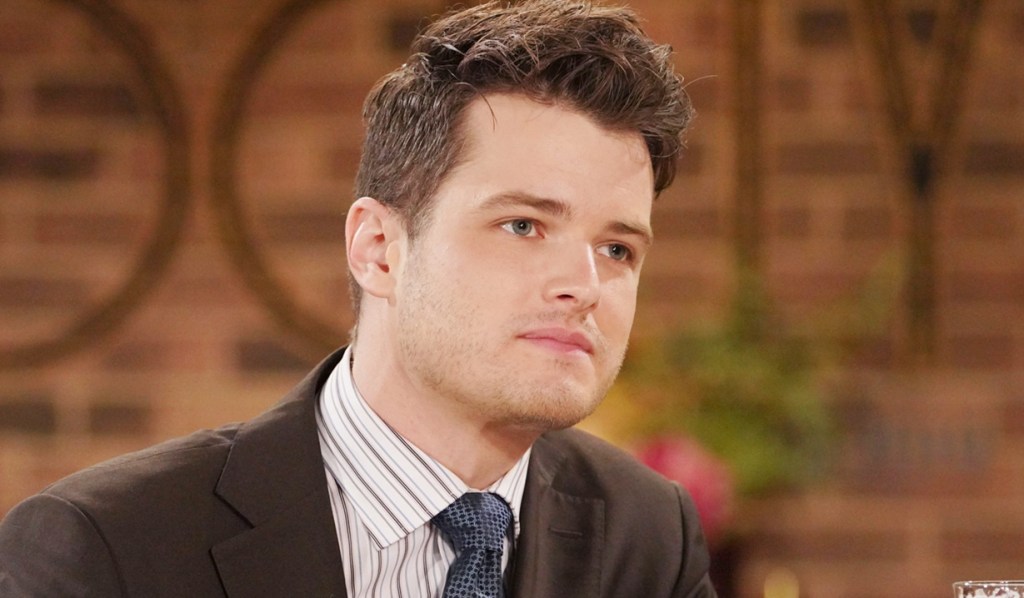 Jack joins Phyllis at the hotel and chastises her for digging into Sally’s personal business. Phyllis guesses Lauren ratted her out; she only has his best interests at heart. Jack insists she back off. Phyllis warns Sally is more problematic than he thinks. Jack curtly informs her he’ll be fine. 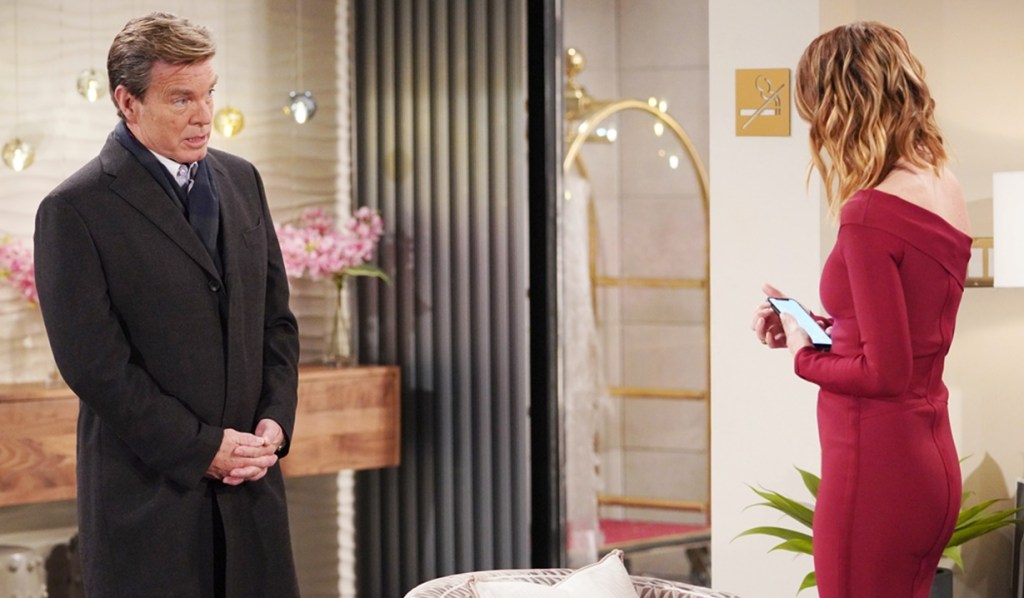 Nate meets Elena at Society and wants to put their cards on the table. Elena runs down Nate’s best qualities before telling him the love she had for Devon never went away. 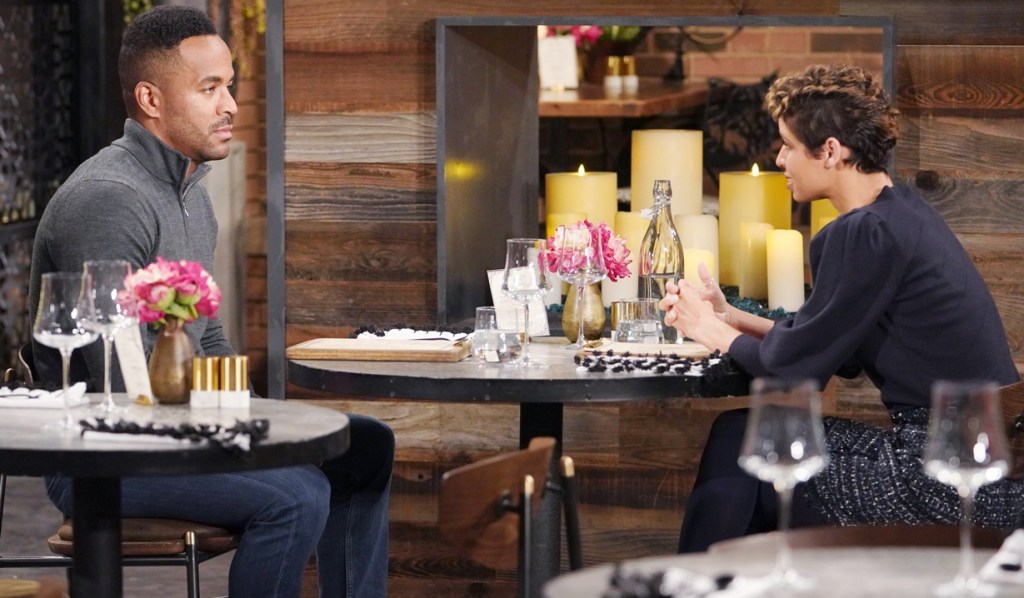 Summer is waiting in Kyle’s suite when he returns. She assures him they’ll face this together.

More: Is this Y&R alum reprising her former soap role?

At the Abbott mansion, Jack poses a toast to his new fashion guru. Sally muses, “Don’t tempt me.”

More: Is Sally destined to cheat on Jack?

Next on The Young and the Restless: Victor delivers bad news.

Relive Devon and Elena’s love story in the photo gallery below. Get your free daily soap-opera fix for The Young and the Restless — and all of the other daytime dramas — delivered straight to your email inbox by signing up for Soaps.com’s newsletter. 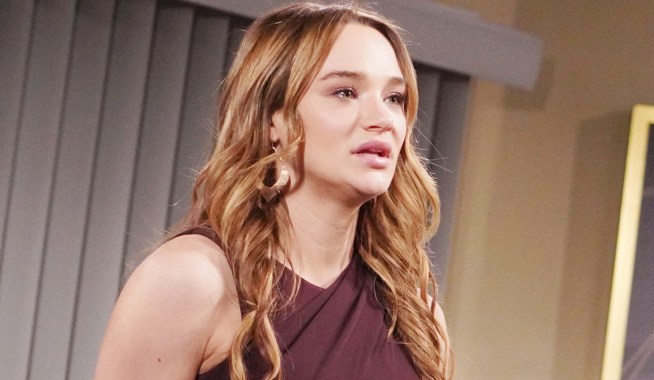 Summer's Floored by Kyle's Revelation When She Confronts Him at Jabot 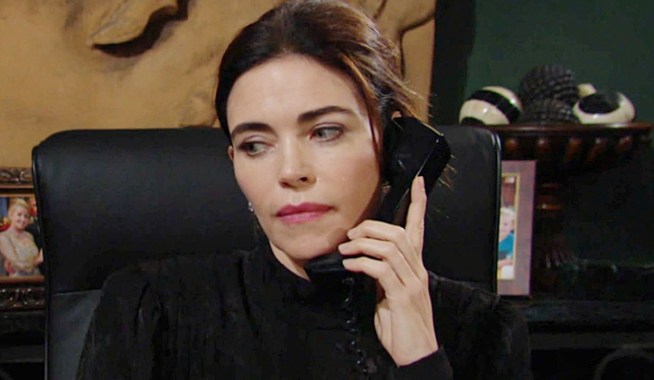