Monday, February 22, 2021: Today on The Young and the Restless, Phyllis and Summer team up, Kyle confides in Mariah, and Devon makes a stunning offer. 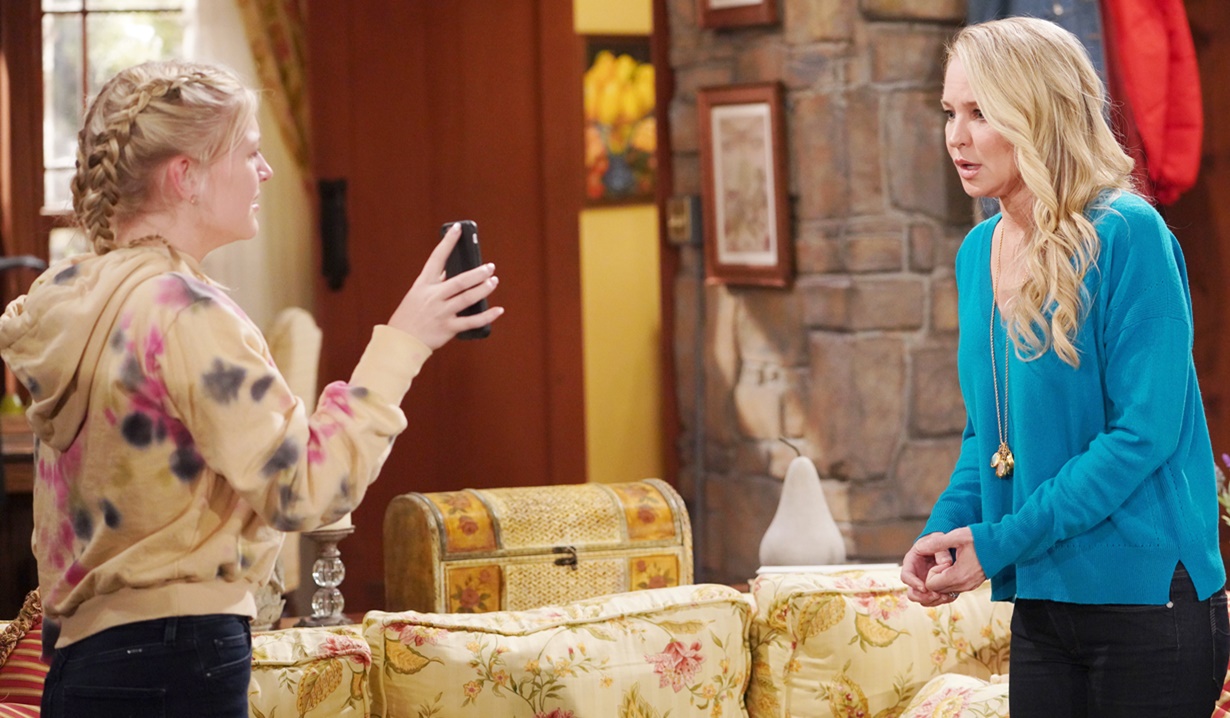 At Crimson Lights, Amanda and Devon spot Abby, so he goes to talk to her. She recaps everything Mariah told him about the challenges she’s facing and wonders if she should even be moving forward. Devon reflects that he watched Hilary go through it. Abby tears up and excuses herself. 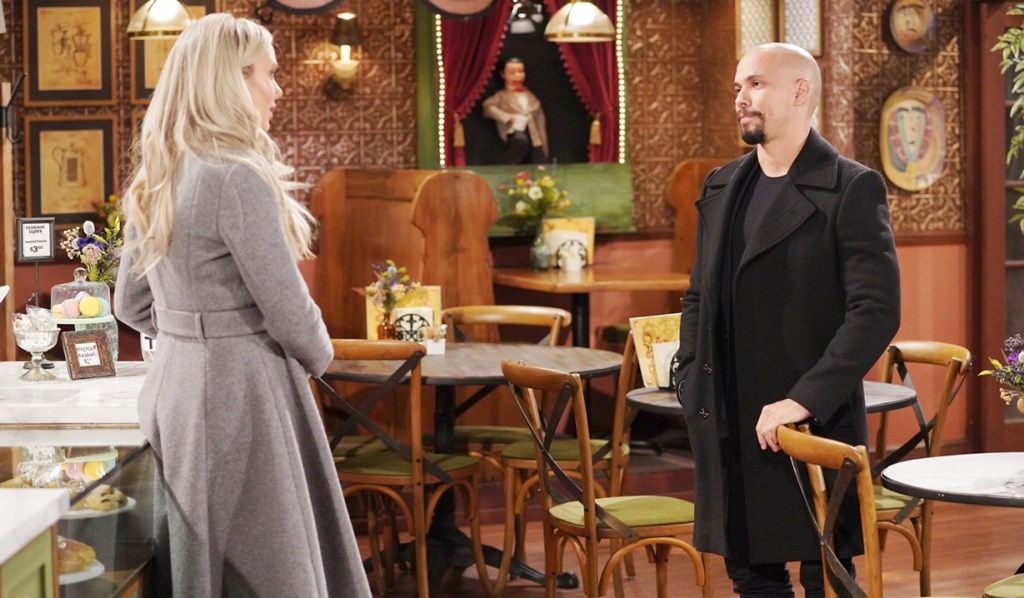 Devon rejoins Amanda on the patio and muses that he knows how Abby feels having her dreams taken away from her. She’s blown away by the empathy he’s showing for Abby. Devon feels invested in their success because it would feel like a win for all of them that weren’t so lucky.

At Sharon’s place, she and Rey update Summer on Faith’s suspension. Summer wants to talk to her to see if she’s telling the truth about being set up. Faith appears and says, “I am.” She thinks Summer may be the only one who believes her. After Sharon tells Faith how much her card meant to her, Faith leaves with Summer.

Once alone, Sharon and Rey go over Faith’s troubles. He wants the best for Faith no matter what happens. Talk turns to Adam. She insists she doesn’t want him, but Rey thinks her actions tell a different story. He’s not giving up but there’s not future for them if she continues to let Adam in her life. Rey adds Faith’s paying the price too. “Your daughter needs you.”

More: Sharon and Adam will reunite — here’s why

At Jabot, Sally chats with Kyle and Mariah before leaving them alone to talk. Mariah notices he clearly has a problem with Sally. Kyle deflects but Mariah’s known him too long. He exclaims, “I can’t talk about it.” After closing the door, he swears Mariah to absolute secrecy, asks her to sit, and fills her in on his affair with the married Tara, which Theo exposed in front of Sally. 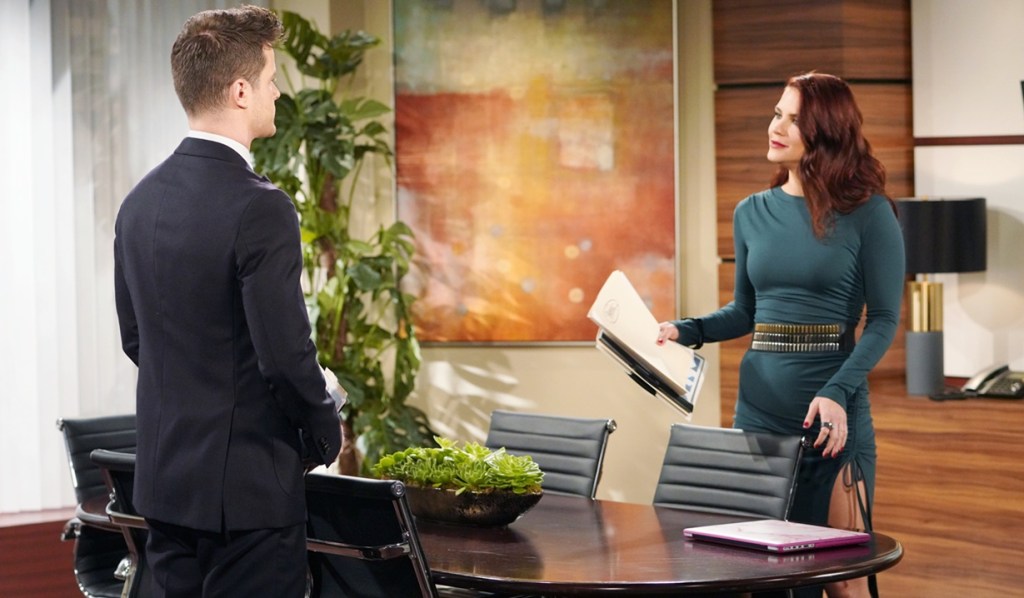 Mariah learns there’s more that Summer doesn’t know — there’s a child. Kyle explains he’s three and looks just like him. Floored, Mariah wonders how he feels about the possibly being a father. Kyle wants to know if it’s true first and reveals Tara blew him off. Mariah asks if he’d want to be part of the child’s life. Kyle flips out — this isn’t a normal situation because of Ashland Locke, who would bring chaos and destruction into his life… and the child’s. 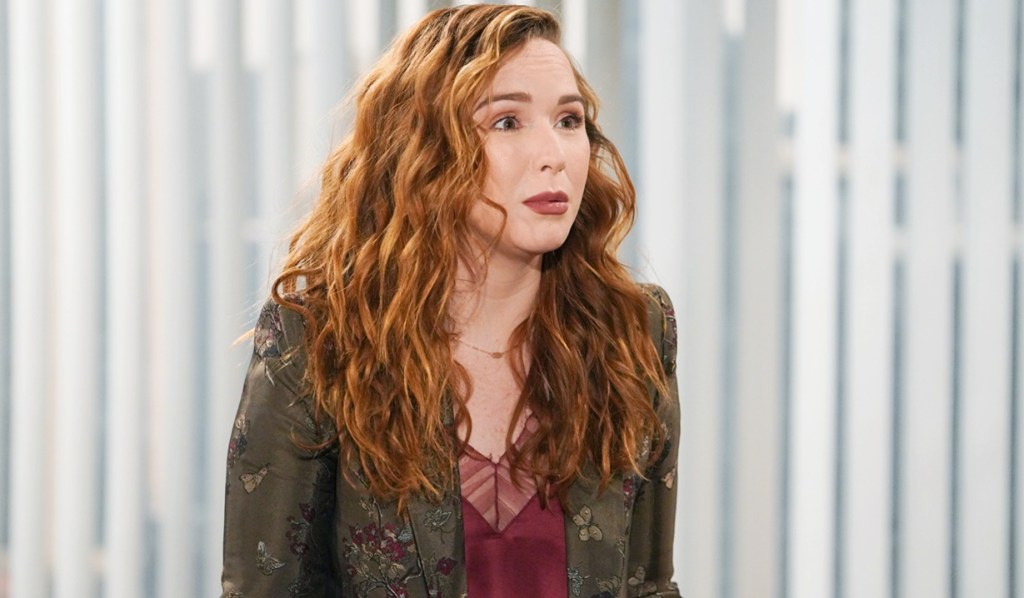 Kyle can’t help but be curious if he’s the kid’s dad. Mariah understands — family means everything to him. She gets a text and has to go, but warns him a secret like this can wreck his relationship with Summer.

More: Find out who will play Tara Locke

At the Chancellor Estate, Abby tells Nina that running into Devon made her realize she’s ready to find a donor. She worries Chance could come back next week and they could make the choice together. Nina warns she doesn’t have to rush this. Abby’s ready and thinks Chance would agree. Later, Abby’s selected a donor and sends in the form only to learn the donor is no longer available. Nina gives her a pep talk.

At Grand Phoenix, Sally tells Phyllis she wants to upgrade to a larger suite. Phyllis pretends to check and says nothing’s available. Sally senses Phyllis doesn’t like her because she and Summer got off on the wrong foot and assures her they’ve smoothed things over. Jack enters. Sally beams, “Jack! So we meet again.” Phyllis takes in the scene with a squint then listens in as they discuss celebrating Sally’s promotion. Jack crows that his belief in her was not misplaced. Phyllis rolls her eyes. Sally heads to the elevator and Phyllis barks at Jack, “We need to talk.” He asks, “About?” Phyllis points in Sally’s direction, “That.” 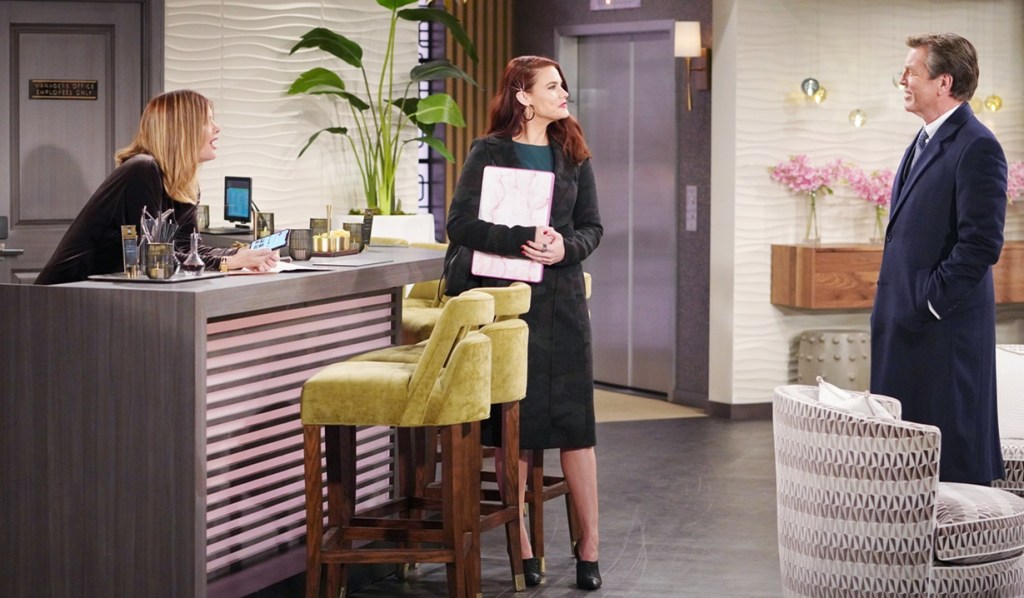 Phyllis and Jack debate whether Sally has an agenda. Jack wants everyone to cut her some slack but Phyllis argues she’s trouble. Jack challenges, “Where’s your proof?” and urges Phyllis to give her a chance. Phyllis exhales in frustration as Jack walks off.

Sally returns to the lobby where Phyllis warns she may have other people fooled but not her. “I know you. I wrote the book.” Sally replies, “Good to know. I’ll be more discreet.”

More: Clash of the redheads on Y&R

At Crimson Lights, Faith opens up to Summer about the kids bullying her about being the baby who was stolen in Billy’s article. Summer confesses she was a bully in high school, but she later changed her ways. She wishes Faith had come to her with this. Talk turns to the drinking. Faith admits she did it a couple of times — with Jordan — but felt horrible after. Summer feels her friend shouldn’t pressure her but Faith reminds her that’s not realistic. 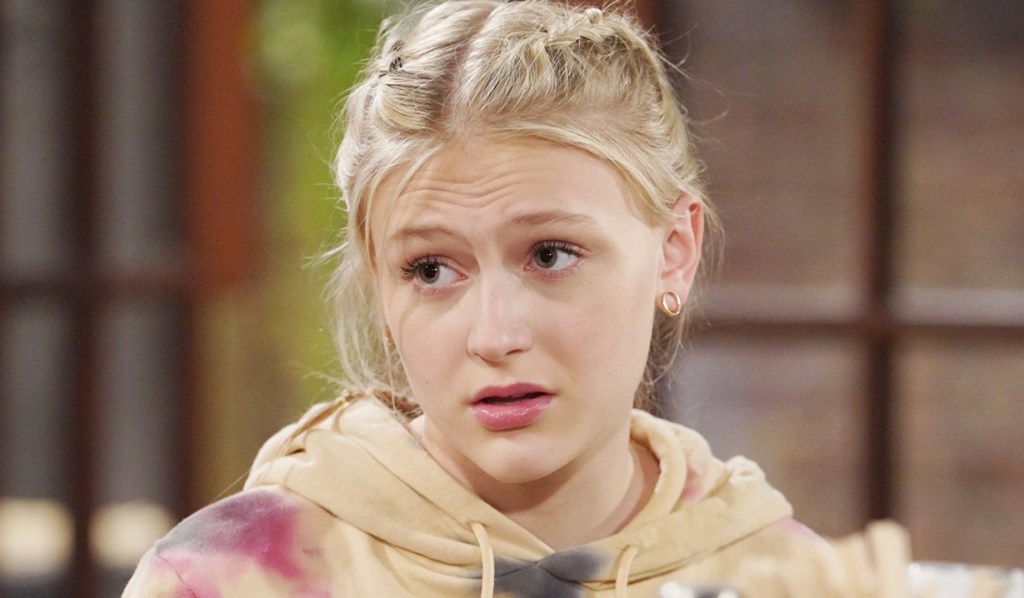 At home, Sharon’s offended at Rey questioning her as a mother but Rey doubles down — can she imagine what it would have done to Faith to see her holding Adam’s hand?! Summer and Faith return and Summer reports the bullying was over the top before assuring Faith she’s not alone. Summer leaves and Faith heads upstairs.

Sharon swears to Rey that Adam’s not an issue anymore. Rey isn’t buying it and they bicker about Chelsea’s therapy. Sharon insists she was acting in good faith. Rey suddenly has to go to work. Faith appears and asks, “What happened. What did you do?” Sharon is trying to reassure her when Faith gets a text and freaks out. “Oh my God! You kissed him?!” Sharon asks, “Who?” Faith holds up a photo of Adam and Sharon kissing on her phone and exclaims, “The monster. What is wrong with you?!”

More: Shadam’s kiss caused drama on and off screen

At the Chancellor Estate, Nina answers the door to Devon, who is followed by Mariah. Nina’s surprised when she says Devon asked her to come by. They join Abby in the living room and Devon reveals he came there to step up and offer to be Abby’s donor. 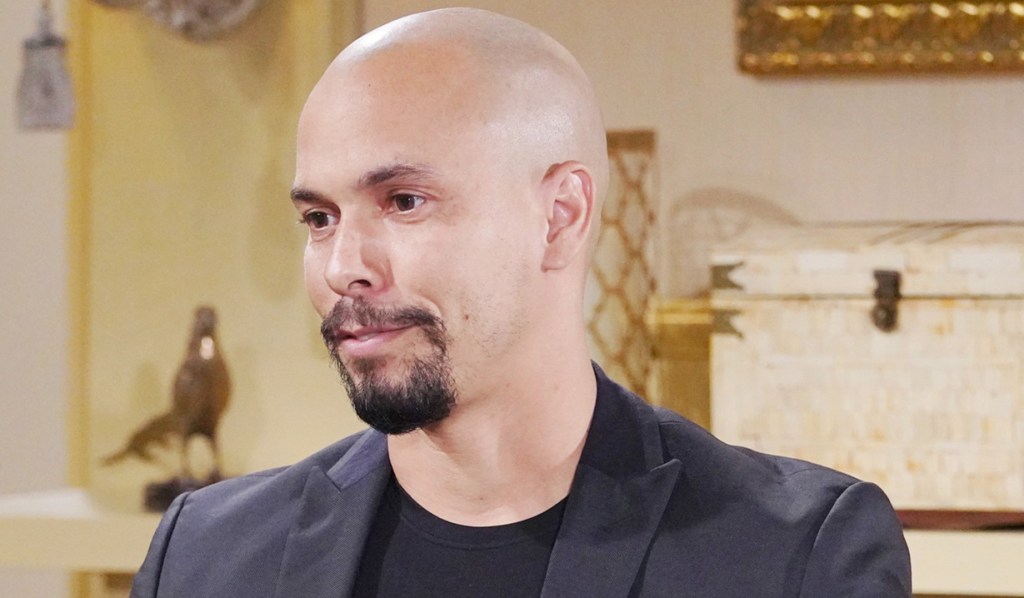 Summer joins Kyle at Jabot where he admits he’s trying to figure out what to do. Summer asks, “About Sally?” She thought they were moving on with their lives. “Did something else happen I don’t know about?” Jack enters and asks if everything’s alright. Summer exits as a text comes in from Phyllis wanting to talk.

At the hotel, Phyllis warns Summer about Sally luring Jack in. Summer confirms this has been going on since she started at Fenmore’s. Phyllis feels bad for Jack, who is vulnerable right now. They agree they have to protect him. Phyllis decides they’ll band together and do something about this Sally.

Next on The Young and the Restless: Summer receives an eerie warning.

See a gallery of Summer and Kyle’s love story through the years below. Get your free daily soap-opera fix for The Young and the Restless — and all of the other daytime dramas — delivered straight to your email inbox by signing up for Soaps.com’s newsletter.

Billy's Valentine's Day Ends With a...