Thursday, February 18, 2021: Today on The Young and the Restless, Mariah shares news with Devon, Nick and Sharon field another crisis with Faith, and Kyle's haunted by the past. 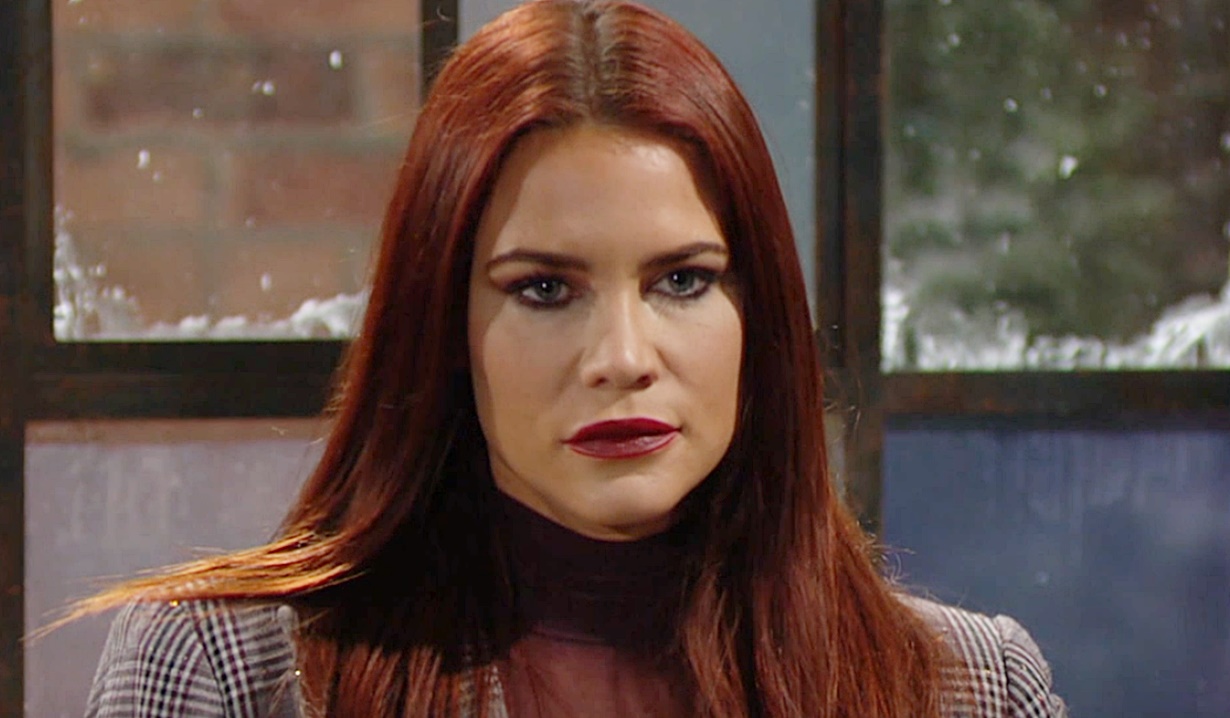 At the Chancellor Estate, Abby’s down without Chance as Valentine’s Day approaches but Nina gives her a pep talk and reminds her he wants her to go ahead to start their family. Abby perks up and decides it’s time to find the other half of their baby’s DNA. She and Nina go over potential donors and quickly become frustrated. Nina reassures her daughter-in-law and suggests they take a break. They look at baby items online, and Nina talks about the highs and lows of being a mother, before Abby goes back to the donor search.

At Society, Mariah tells Devon that she’s going to be a surrogate for Abby and Chance. She recaps their respective reproductive issues and explains that Chance is out of town but they’re moving forward. Devon finds it extremely generous of her, but points out pregnancy is no vacation. Mariah knows there will be difficult moments. 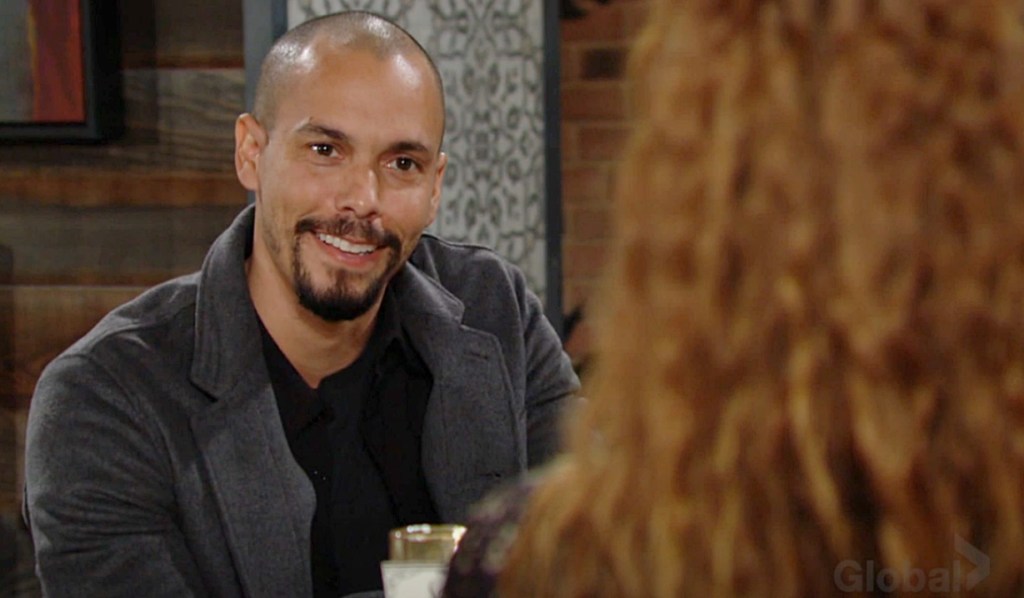 Mariah sends Devon a photo Tessa made of her wearing a bow on her belly and relays she’s been incredibly supportive. Mariah’s just waiting for Abby to choose the biological Mr. Right. Devon remembers when Hilary considered an anonymous donor and muses he’s not even a fan of online dating. Mariah has faith that Abby will find the guy to make their baby dreams come true.

At Jabot, Kyle’s totally distracted while Lauren’s speaking about business. Suddenly, Bill Spencer from Spencer Publications arrives. Lauren greets him and he begins to flirt so she introduces him to Jabot’s co-CEO, Kyle. Bill explains he thought he’d drop in on the boss lady to get the lay of the land. Lauren welcomes him to Genoa City.

Once alone, Kyle is flashing to Theo telling him he has a child when Jack interrupts and asks if something’s wrong. Kyle isn’t forthcoming so Jack exits. Kyle picks up his phone and contemplates calling Tara, his former lover from New York.

Sharon, Nick, and Faith enter Sharon’s house and Faith wants to go upstairs. Nick orders her to sit down and deal with the fact that she was kicked out of her school. Faith argues that she was suspended not expelled. Sharon and Nick demand to know how a bottle of vodka ended up in her locker. Faith claims she was set up — whoever reported her must have planted the bottle. She fumes that no one will believe her including her parents. Sharon points out she’s been lying to them.

More: The battle of the redheads Y&R should write

Faith complains she’s being bullied at school and online. Sharon wants to read the texts but she’s deleted them. Faith doubts her parents could help her; only Jordan had her back. She flings herself into a chair and exclaims, “She’s the only person who doesn’t hate me!” Faith continues that it all started with the article about Adam kidnapping her as a baby. Nick wants the names of the bullies, but Faith won’t snitch. She storms upstairs. 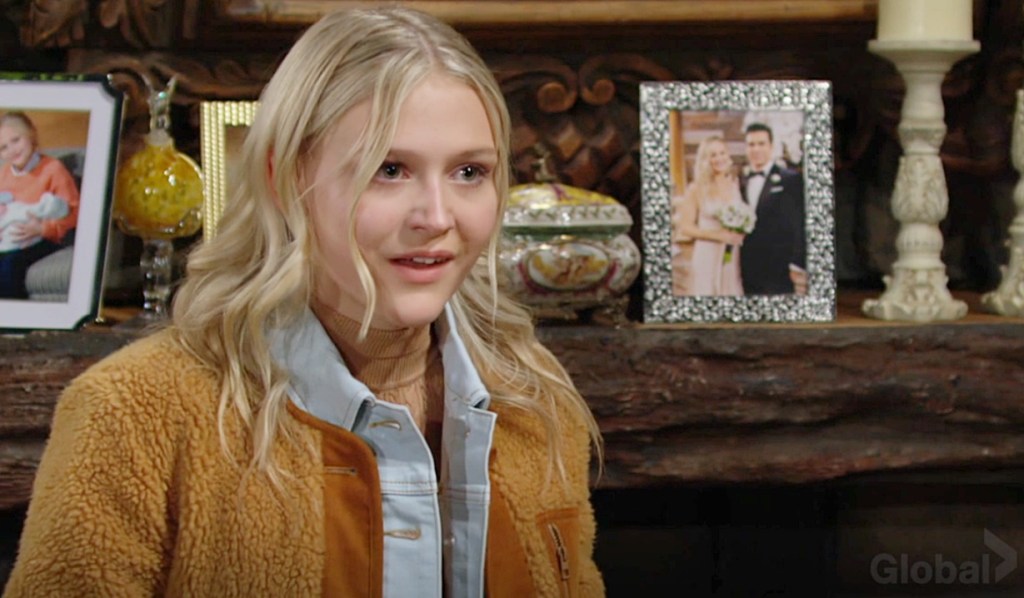 Nick questions Sharon about Jordan and she explains she suspected Jordan brought over the vodka. They debate whether Faith is lying about the alcohol in her locker. Sharon fears she’s spinning out of control. Just then, Rey enters. Nick goes to check on Faith and Sharon updates Rey on the situation with her daughter. He resists pivoting to talk of their marriage, but she’s concerned he’s drifting away. Rey walks out as Nick reappears. He hopes Adam hasn’t ruined her marriage.

At Crimson Lights, Summer approaches Sally and informs her Kyle told her about his threat to expose his affair. Sally smirks, “Oh. Is that all he told you?” Summer wants to know if there’s something else. Sally’s just surprised he told her so much. Summer remarks on how low she’s willing to go and Sally reminds her she started it — she only gathered ammunition as a deterrent to ward off an attack. Sally promises not to come for Summer’s job. Summer sneers at her generosity. Sally reminds her an all-out war ensures mutual destruction; from here on out they don’t have to worry about each other and maybe one day will even wind up friends. 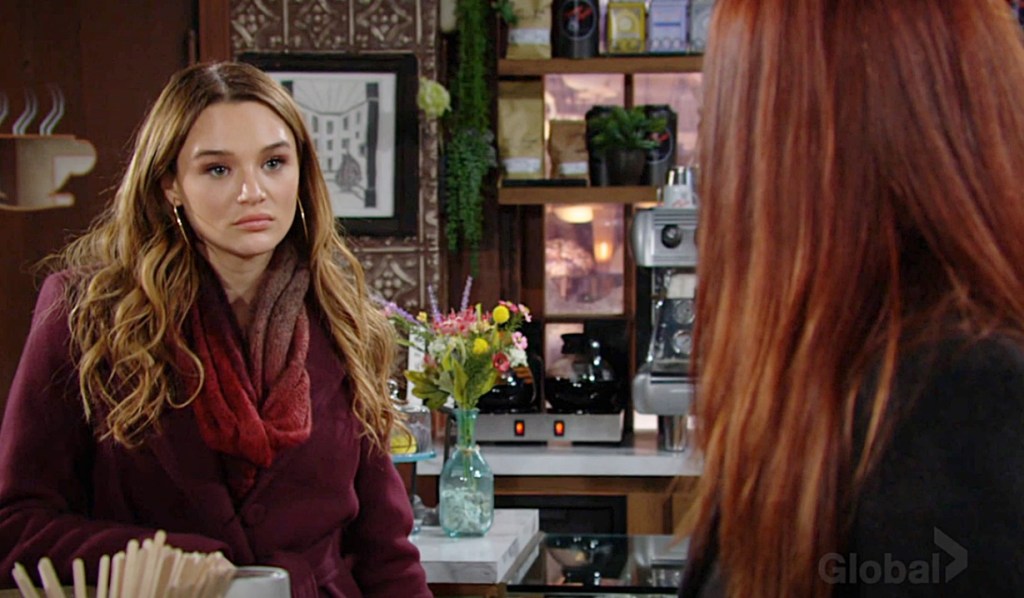 Summer arrives at Jabot in time to overhear Kyle leaving a voicemail message for Tara to call him. She doesn’t hear him mention Tara having a son, but asks, “Why are you calling your ex?” Summer figures he was trying to warn her the truth could come out and reveals she’s called a truce with Sally. She smirks over Sally suggesting they might become friends. She’s taken aback when Kyle says they should give it a shot and keep her close. 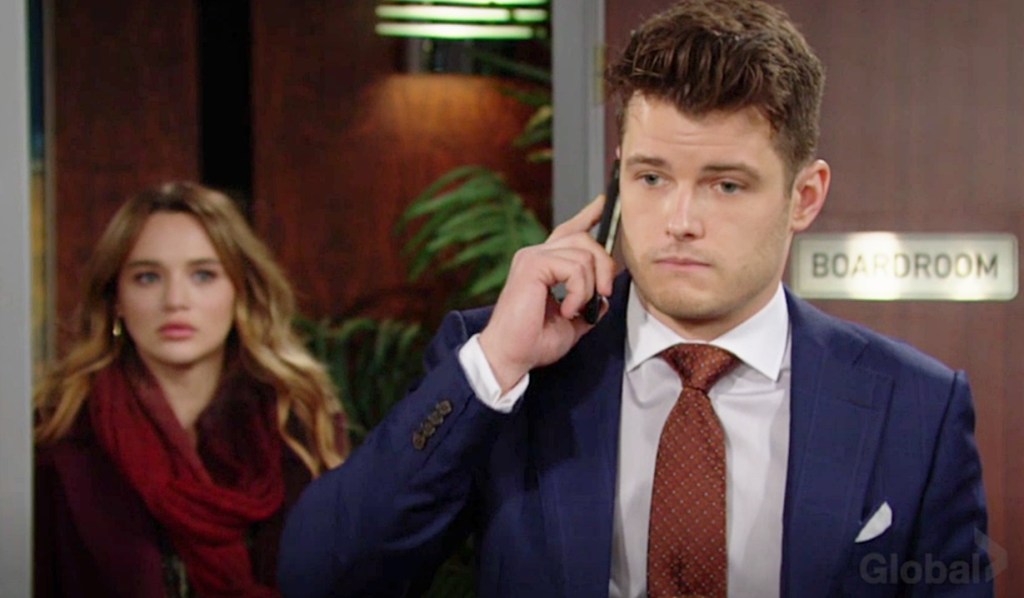 Later, Bill and Lauren are in Jabot’s boardroom when Jack enters. Bill needles by calling him Jack Rabbit then apologizes before asking after his sisters, Ashley and Traci, implying he knows them intimately. He thinks Traci should join a real publishing firm. Jack behaves protectively. Bill’s momentarily silenced as Sally appears in the doorway. Sally walks off and Bill explains they have a history. After Bill leaves, Lauren tells Jack that Sally told her there was bad blood between her and Bill but she only got one side of the story. 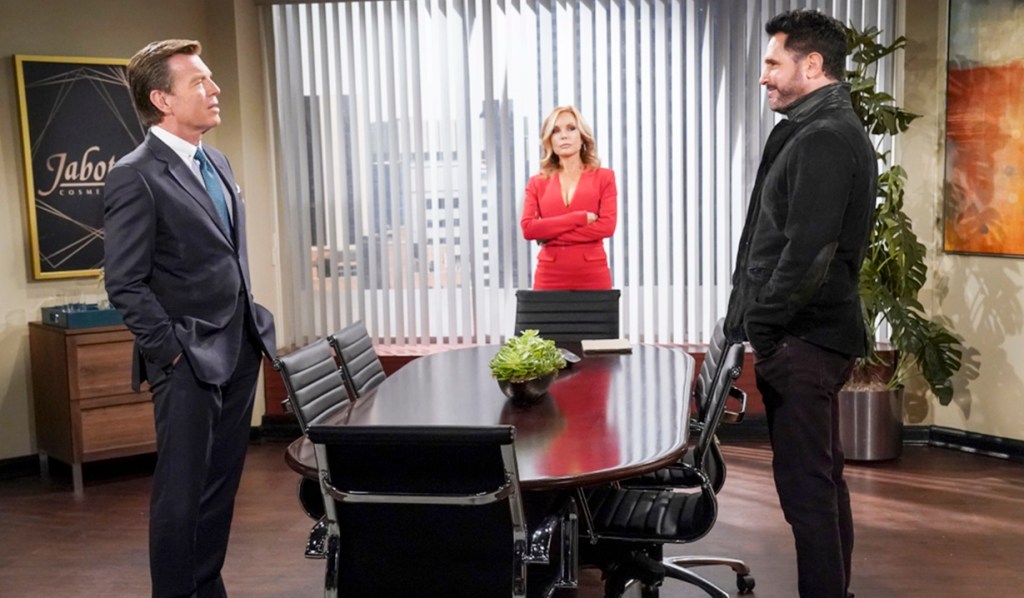 At Society, Bill and Summer are concluding their meeting when Sally arrives. She sits by the window and clears her throat as Bill heads to the door. He insults her and she asks what he and Summer were talking about. Bill explains it was business and assures her he restrained himself from talking to Lauren about her… as long as she stays out of L.A. “Good luck with this fresh start or whatever the hell it really is.” After Bill’s gone, Sally warns Summer not to do business with Bill Spencer; he’s the most ruthless man she’s ever met and will burn her world to the ground to get what he wants. 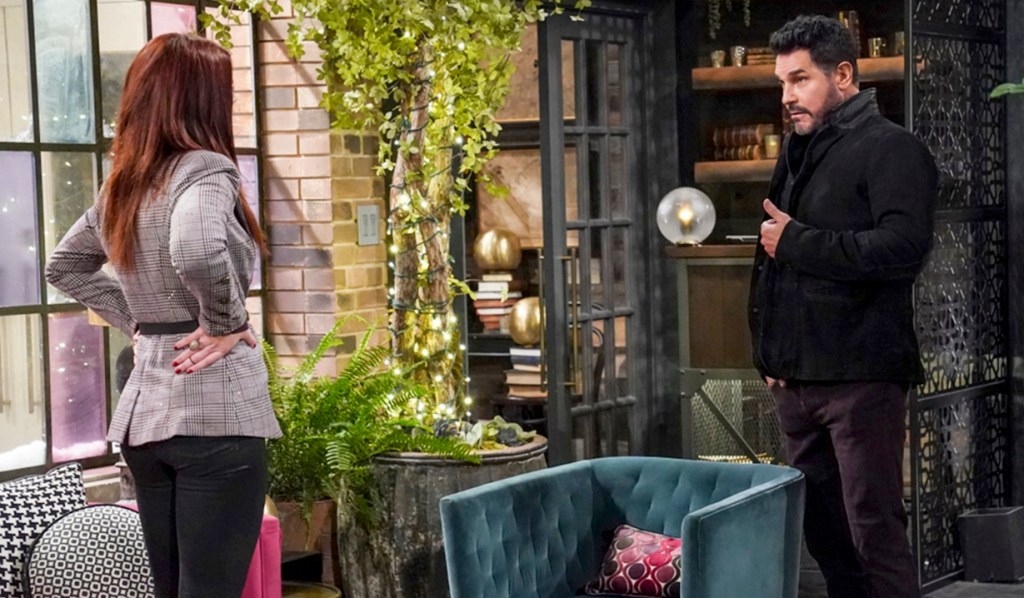 Devon arrives at home, looks at the photo of Mariah with a bow on her belly, and then casts his eye around his empty penthouse.

At Jabot, Kyle gets a text from Tara saying he’s made a mistake and asking him not to contact her again.

Next on The Young and the Restless: Victoria crashes Lily and Billy’s Valentine’s Day date. Or in our alternate reality, this is the love story we’d be telling for Victoria. Read Chapter 3 of the romance Young & Restless won’t give her.

See a gallery of Don Diamont as Bill and Brad on the CBS soaps below. Get your free daily soap-opera fix for The Young and the Restless — and all of the other daytime dramas — delivered straight to your email inbox by signing up for Soaps.com’s newsletter. 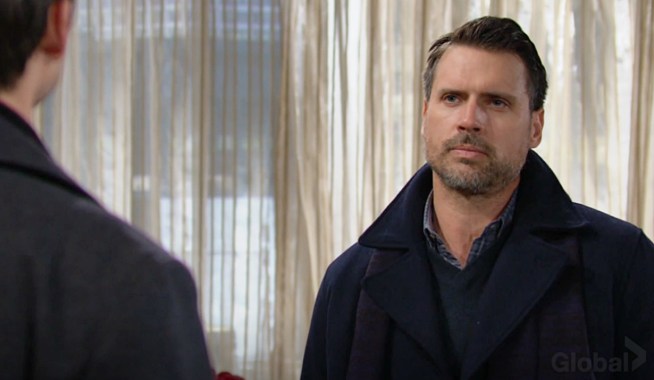 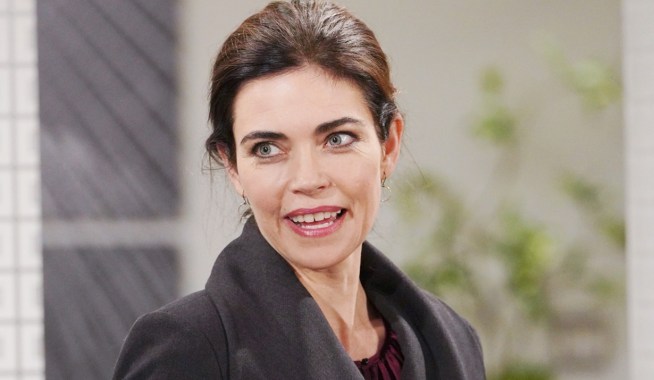