Wednesday, February 17, 2021: Today on The Young and the Restless, Amanda meets up with her mother, Nate makes a request of Elena, and Rey questions his future. 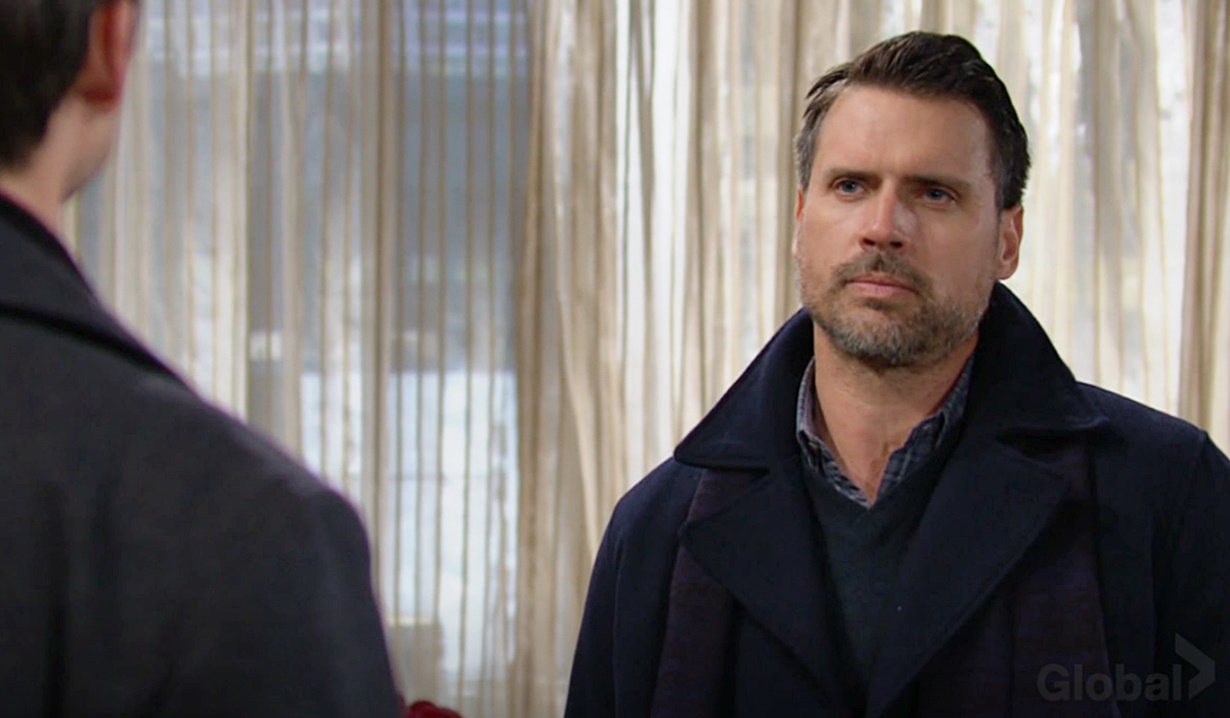 Nate returns to the hotel suite and Elena’s distressed that he slept outside. Nate thinks the trip turned out to be what they needed — a cold, hard dose of reality. They agree it’s impossible to pretend nothing happened. Elena wishes she could help Nate understand and realizes she’s pushed him to his limits.

Elena explains what happened with Devon had nothing to do with Nate. What they had was beautiful but not strong enough to keep them together. She wants to move on with Nate, but he can’t do it knowing he only has a part of her heart. They agree cutting the trip short is the right thing to do and Elena concedes she has a lot to think about. She promises her feelings are real. Nate hopes things will work out… eventually. 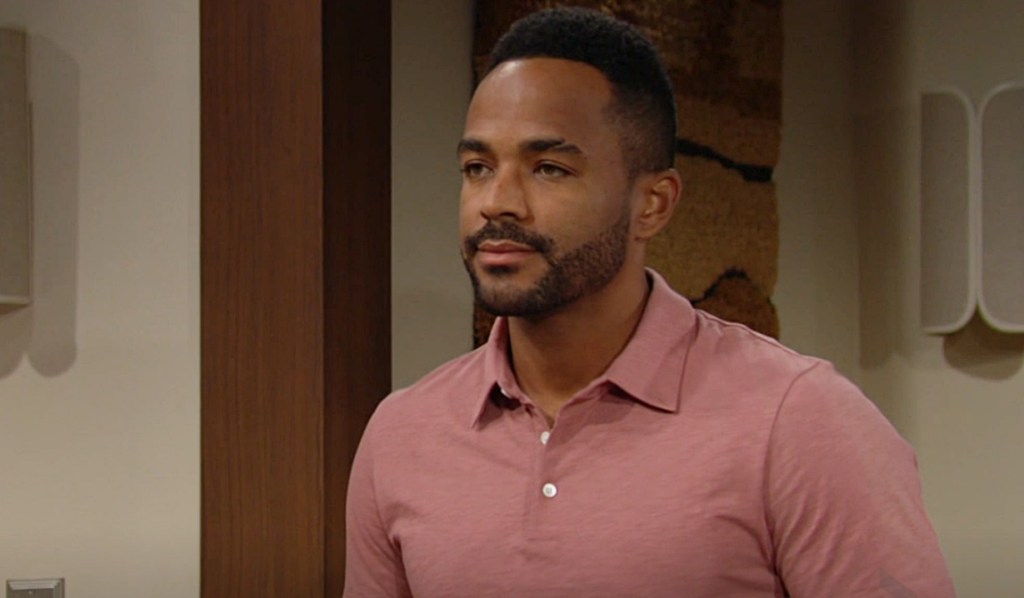 Devon comes downstairs to find Amanda making breakfast in the penthouse. He feels like the luckiest guy alive. Amanda reveals she got a text from her birth mother who’s in town and wants to meet up.  Amanda’s torn — there’s still a restraining order against her thanks to her half-sister, Imani. Devon understands but Naya came all this way to see her and is unlikely to call the cops. “What’s really holding you back?” 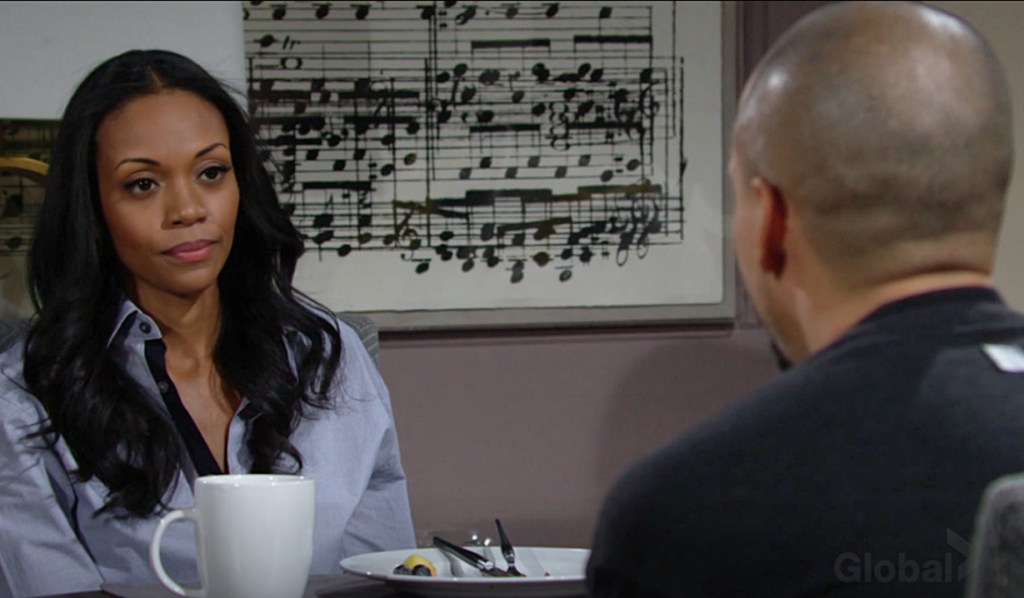 Amanda and Devon debate about Naya’s change of heart. They recall how they got off on the wrong foot and now have become important to one another. Devon thinks it could happen with Amanda and Naya too. Once alone, Devon flashes to his night with Elena.

At Sharon’s place, Faith snarks at her mother about her treatment of Jordan before storming out. Nick arrives and offers to take their daughter to school but Sharon wants to do it.

Adam enters Crimson Lights where Rey advises him for his own sake to turn around and walk back out. Adam wonders why he’s acting like he wants to bash his face in. Rey wonders how Chelsea’s doing while he’s there entertaining himself with his sick games. He calls Adam irredeemable. Adam needles that Sharon doesn’t see him that way. Suddenly, she appears. Adam steps away and Sharon assures Rey she told Adam she was done treating Chelsea. Rey complains that doesn’t address the core problem. 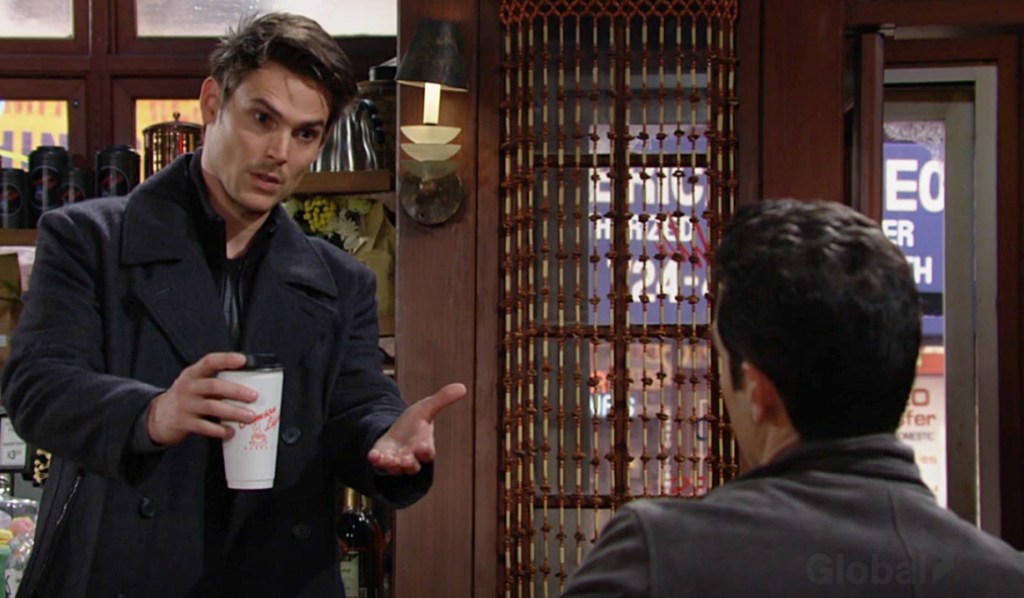 After Rey leaves, Adam asks Sharon if she told him about the kiss. Sharon didn’t and asks, “Did you?” Adam didn’t let anything slip. Frustrated, Sharon asks him to stay away from her; he’s ruining her life. Adam just wants her to be happy. Mariah arrives in time to see Adam’s exit and asks Sharon, “What have you done now?” 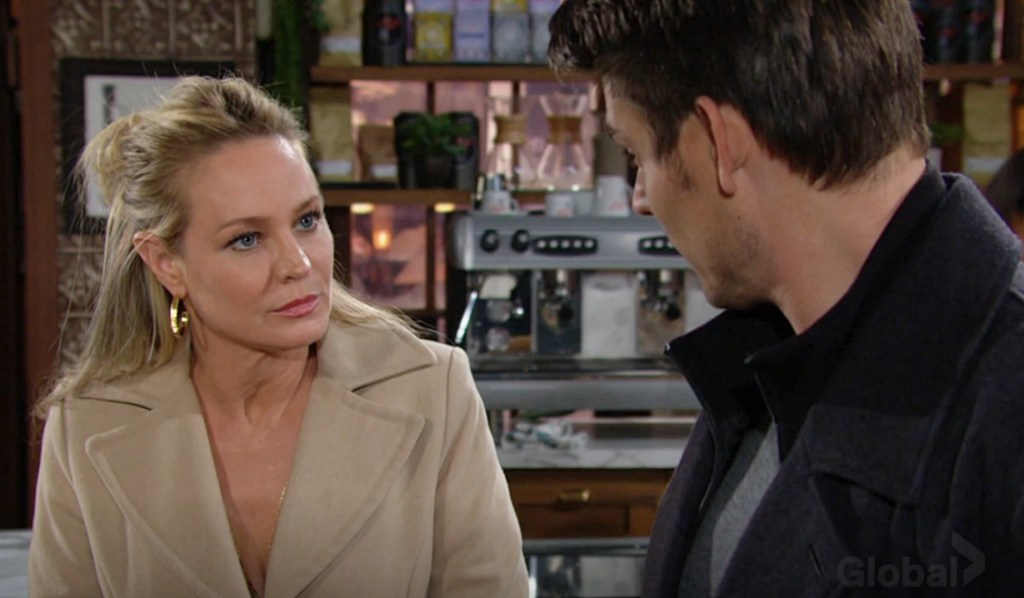 Mariah learns Rey saw something happen between her mother and Adam, though Sharon downplays it. Sharon insists she’s dealt with the situation, but Mariah points out she put Adam first yet again. She doesn’t want her mom to lose Rey and calls Adam despicable. “Why can’t you let him go?!” Sharon doesn’t know and walks out. Nick appears and Mariah reveals Adam’s trying to come between Sharon and Rey and seems to be succeeding.

On the coffee house patio, Naya wants to hear about Amanda’s life. Amanda only talks about that with people she knows well because it was hard. She’d rather discuss Naya’s life, and assures her she realizes she’s still a shameful secret. Naya sighs; she hasn’t handled this well. She explains that the guilt came rushing back when Amanda showed up and says that learning Hilary was gone was too much to handle at once. She wonders how they can move forward. 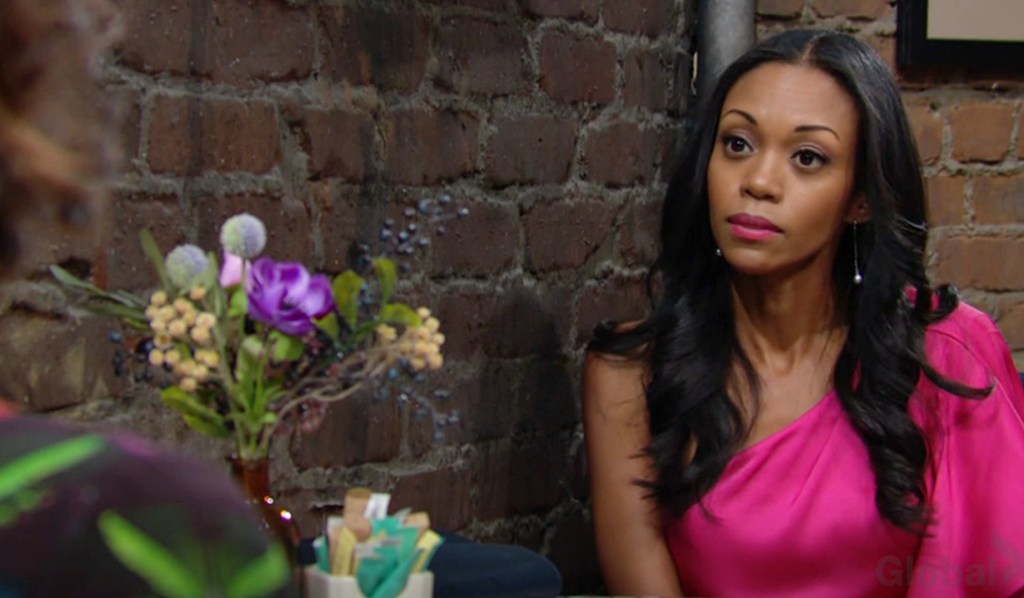 Naya doesn’t want to cause any more pain and tells Amanda this has hurt Imani as well. Amanda’s irritated. Naya would like to get to know Amanda. Choked up, Amanda asks, “What about Imani and your family?” Naya would like to keep it between the two of them… for now. Amanda’s offended that Naya only wants to reconnect on her terms. She informs her mother, “I’m sorry. I don’t think I can do that,” and walks out.

Nick visits Chelsea at the penthouse and the nurse gives them time alone. He explains he didn’t come sooner because Adam made him feel he shouldn’t. Chelsea fumes, “Since when do you listen to Adam?” She wishes she could talk and tell him to keep his ex-wife away from Adam. Nick’s giving her a pep talk about bouncing back as Adam arrives. 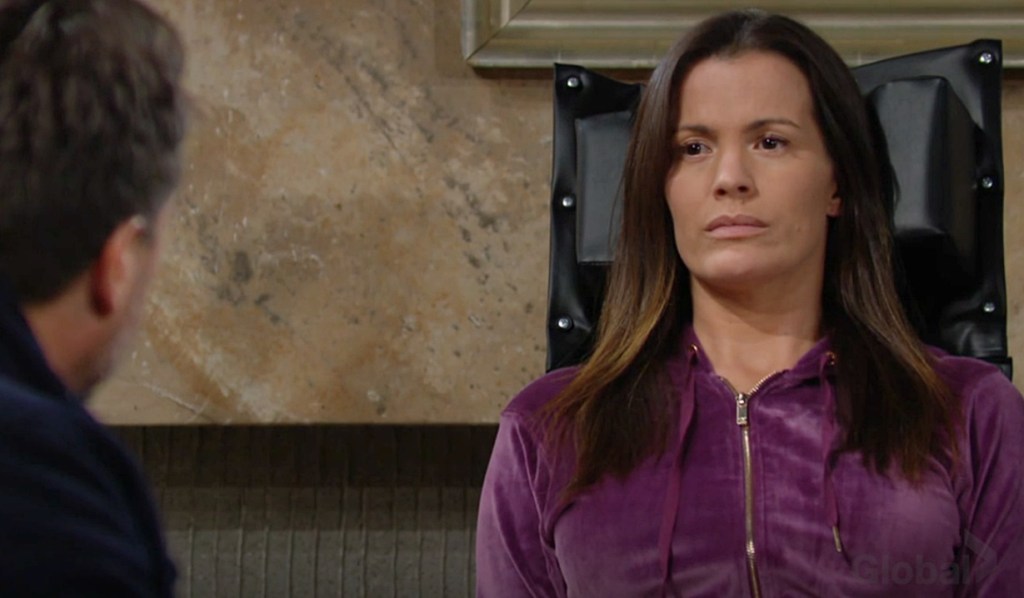 Chelsea listens as Nick tells Adam to stay the hell away from Sharon and accuses him of continuing to mess with her head. As Chelsea wonders what happened and if they’re having an affair, Adam asks Nick to leave. Panicking, Chelsea thinks, “No, don’t go! I need answers!” Nick needles Adam about pestering Sharon. Adam explains to Chelsea that he merely ran into Sharon this morning. Chelsea thinks, “You’re lying.”

Adam takes Nick into the hallway. Nick warns he won’t let Adam push Sharon past her breaking point again. Adam rejoins Chelsea and snarks about Nick as Chelsea fixates on Adam pursuing Sharon. She wants to know what he’s up to, then decides, “Nevermind, I already know. You bastard!”

At home, Sharon looks at a photo of her and Rey then texts him to say she wants to work through this. She sits on the sofa and relives her kiss with Adam before tossing a cushion on the floor in frustration.

Rey joins Lola at Society and confesses he and Sharon have been arguing about her letting Adam back in repeatedly. He wonders if he’s being a fool. Lola understands it reminds him of Mia and Arturo. She reflects on their mom being unable to ever resist their father. “She would always go back to him.” Rey figures Sharon will never let Adam go. Lola hopes they’ll work it out. Rey has tried to see Sharon’s side, but warns if she expects him to continue to deal with Adam, it’s not going to work. 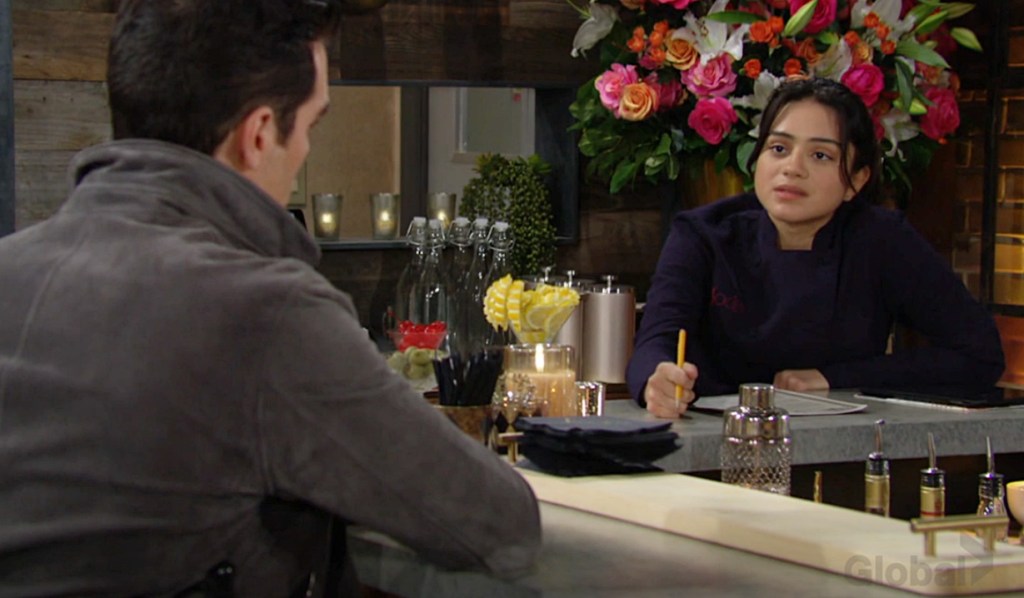 Elena runs into Devon at Crimson Lights where she reveals that Nate figured out what happened between them. Devon learns he wasn’t angry, but Elena’s unsure what will happen for them. Nate asked her to search her heart.

Amanda spots Nate entering Grand Phoenix and he begs off chatting about his trip to go take a nap. She looks puzzled as he boards the elevator.

More: Are you up for Y&R’s battle of the redheads?

Devon joins Amanda and asks about her meeting with Naya. Amanda reveals she wants to get to know her but there’s a big condition — their relationship has to be kept secret from her family. It made her feel like a shameful guilty secret. Devon’s sorry. Amanda just doesn’t know where they go from here.

At home, Sharon gets a call. Asks, “What?! Is Faith okay?” and then rushes out.

Next on The Young and the Restless: Victoria crashes Billy’s Valentine’s Day date with Lily.

See a gallery of Adam and Sharon’s love story below. Get your free daily soap-opera fix for The Young and the Restless — and all of the other daytime dramas — delivered straight to your email inbox by signing up for Soaps.com’s newsletter.

Sally Reels When a Ruthless Man From...