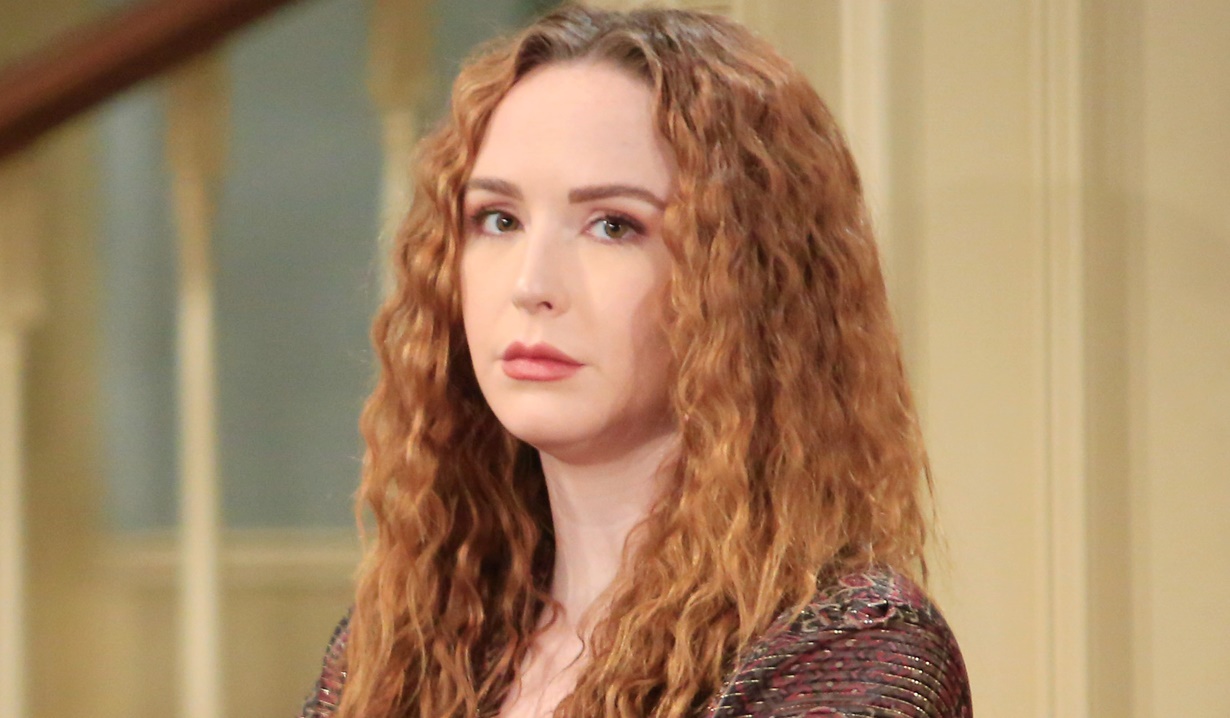 At the Chancellor mansion, Abby prepares the parlor before they ask someone to carry their baby. Chance urges her to relax and act natural. He reminds Abby that once they ask, it’s out of their hands. Abby’s hoping she’ll agree. The doorbell rings — it’s Mariah.

Abby tells Mariah how much she’s appreciated her support. Chance comments on how much they cheered Abby up the other night. Talk turns to Abby’s diagnosis and she relays they’ve made some decisions. “We’ve opted for gestational surrogacy.” Mariah’s happy for them and asks how she can help find their carrier. She wonders, “How do you find someone willing to do that?”

Chance excuses himself and Abby ruminates that this is the biggest request you could make of someone. Abby explains they were hoping their surrogate wouldn’t be a stranger and would be someone they care about and who has stepped up for her before. Realization dawns and Mariah says, “You want me to carry your baby.” 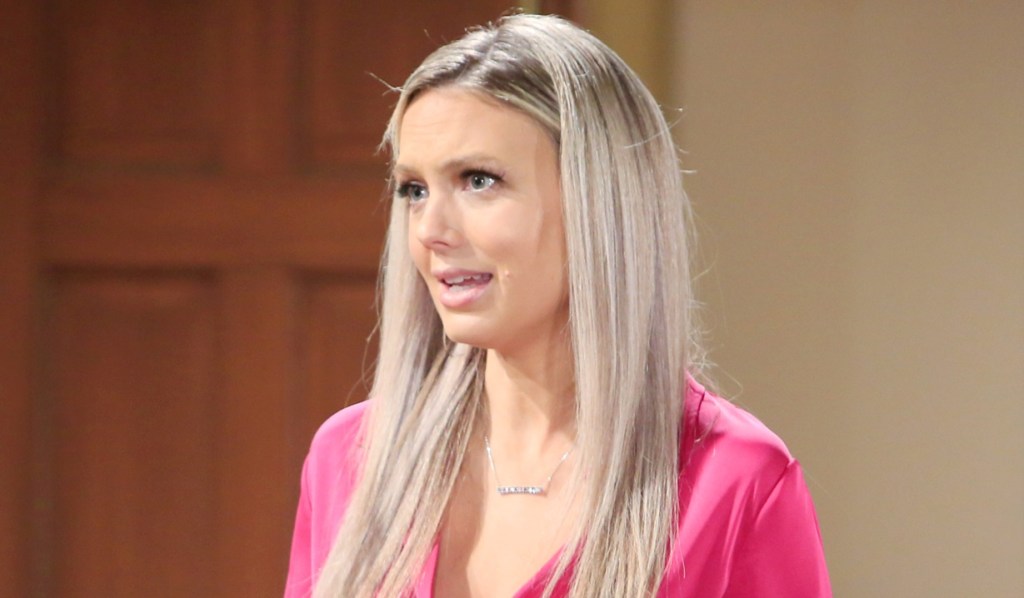 Abby confirms to Mariah, who has taken a seat in shock, that she’s right — they want her to carry their baby. Chance rejoins them and assures her it’s fine if she doesn’t feel it’s right for her. Abby and Chance make their pitch about what it means to them. Abby knows she would be the perfect person to bring their baby into the world. Mariah needs time to think… and to talk to Tessa. She leaves. Abby and Chance share a dismayed look.

In Victoria’s living room, Billy hollers to Johnny and Katie. Victoria appears and he questions her not going to Hawaii with her mom. She cites the weather and invites him to stay there and hang out; the kids will love it and Lily’s away so… 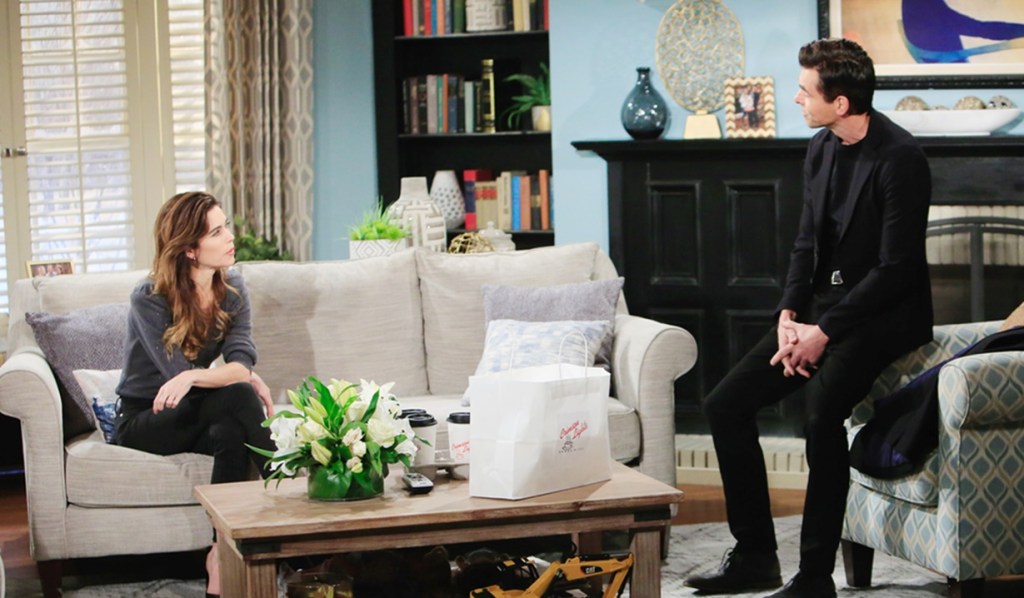 Nick arrives at Grand Phoenix and tells Phyllis they just added two new New Hope locations. He has some time between meetings and asks what she’s doing right now. Phyllis wonders what he has on his mind. Nick replies coyly, “You know what’s on my mind.” It turns out it’s a video game rematch, but Phyllis can’t join him because Summer texts her to meet.

At Crimson Lights, Summer remarks to Kyle that she can’t believe that after what Sally did in L.A. she didn’t dye her hair, change her name, or remove all traces of her past before moving there. Kyle reminds her the goal was to find out what they’re up against, not to wreck Sally’s life. 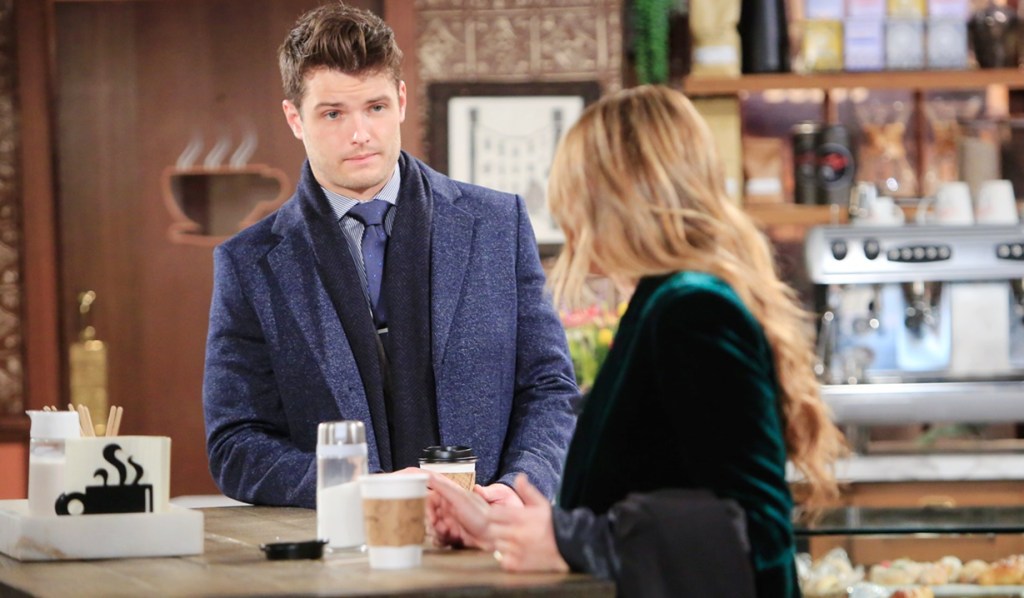 At Jabot, Jack finds Sally stewing over the selfie of Summer and Flo and asks if everything’s alright. He decides to get her a coffee to make her day a little easier. She thinks that’s sweet.

Summer joins Phyllis and Nick in the hotel lobby. She updates them on the business side of her trip and they’re proud. Nick wonders why she wanted to meet up. Summer shoots Phyllis a look and she reminds Nick he has a meeting. After Nick’s gone, Summer confides in her mother that she went to L.A. to get the scoop on Sally Spectra; she’s trouble. If she goes missing, she can assume Sally’s kidnapped her… because she’s done it before.

Summer fills Phyllis in on Sally’s transgressions offscreen then asks how she would use it. Phyllis confides that she got something big on an adversary recently and she relaxed, did not react, and kept it close to the vest. Summer can’t just wait around for Sally to do something. Phyllis advises her to be smart, sometimes acting rashly can backfire. Summer asks what she’d have done if she were her age. At her age, Phyllis would have been the Sally in the scenario. “Keep that in mind.” 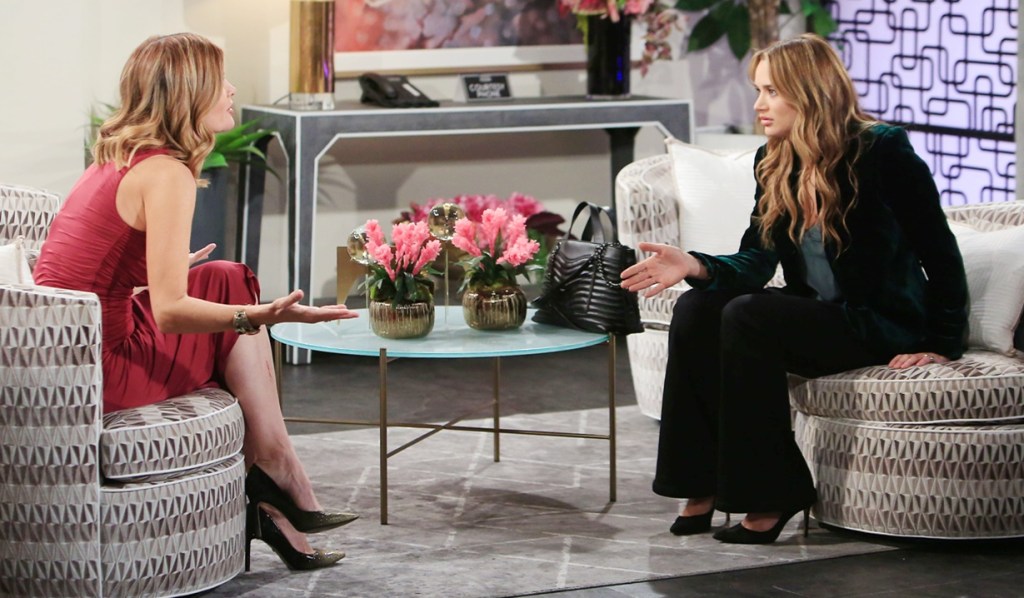 At Jabot, Sally suggests to Kyle that the three of them get drinks — she, Kyle, and Summer. Kyle’s non-committal and begins to leave. Sally exclaims, “Kyle! Wait…” They discuss Summer posting a selfie with Flo. Kyle insists their trip wasn’t about her. Sally needs to tell him there are two sides to every story — all her mistakes were made out of love and passion. She pleads with him not to bury her with her past errors. Kyle repeats he’s not interested in what she did in L.A. Sally asks, “Does Summer feel the same way?” Kyle can’t speak for her. 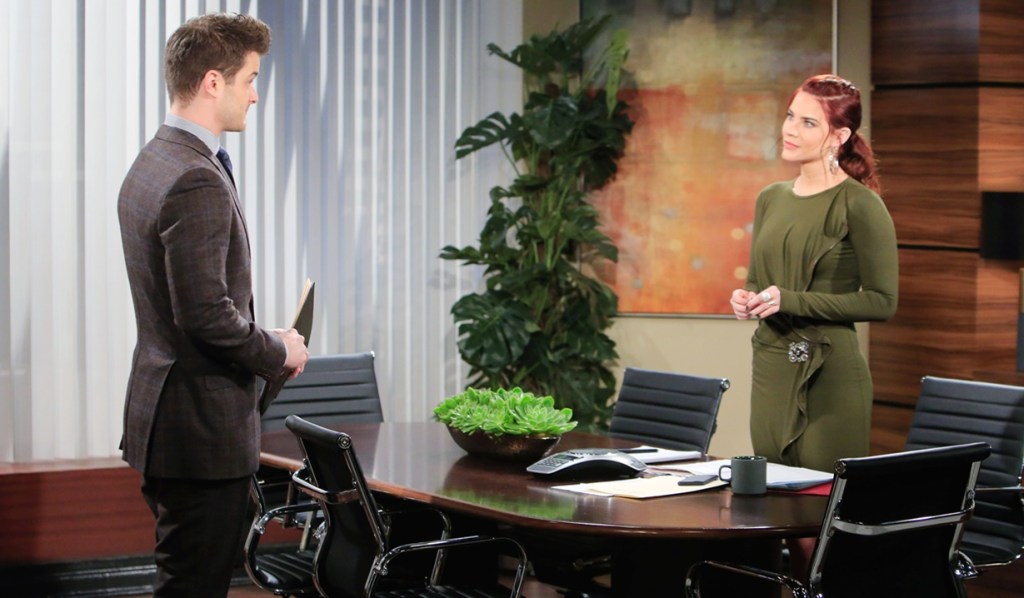 Billy and Victoria both work in the living room while the kids run in and out. Vikki takes a call from Nick, who hears Billy playing with the children in the background. He invites her to come sledding with him and Christian, but she’d rather stay there. Nick snarks, “Hanging out with Billy…”

Victoria and Billy banter about past memories as Billy tosses a ball with Johnny. Johnny enthuses that it’s fun having everyone together. Later, Victoria gets a look as Billy takes a call from Lily and tells her he misses her.

Sally rushes into Society and tells Jack she just got a distressing call and needs his help. She messed up on a shipping deadline. Jack provides a solution, but senses something is really weighing on her. Nearby, Phyllis listens and makes a face as Sally thanks Jack for being her hero. Phyllis approaches and introduces herself as Summer’s mother. When Sally takes a call, Phyllis asks Jack, “What are you doing?” Jack defends Sally. Phyllis questions if he knows everything about her. He repeats, “She’s a friend.” Phyllis wishes him luck. 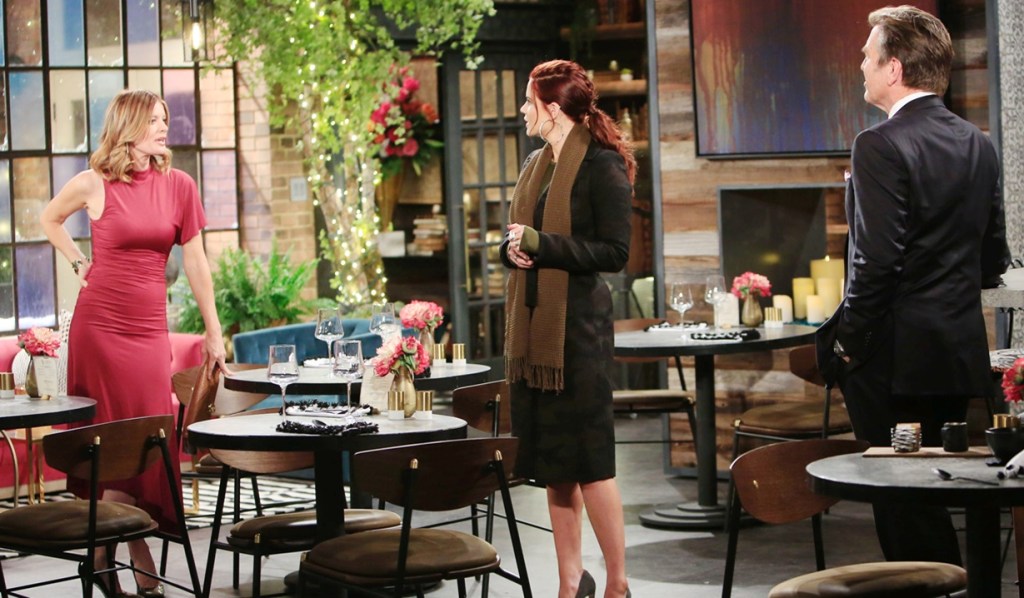 At Crimson Lights, Mariah asks Tessa if she can picture her pregnant. Tessa doesn’t understand. Mariah tells her Abby and Chance have asked her to be their surrogate. Tessa gapes, “Wow.” Mariah agrees. “Exactly. Wow.” She describes making a beeline for the door and explains she didn’t agree to it — she wouldn’t have without talking to Tessa. She marvels it would be nine months she couldn’t eat sushi, ride a rollercoaster, or drink a cocktail. Tessa concurs that it’s a lot to ask, but feels Mariah needs to decide if it’s truly something she wants to do. She notes Mariah hasn’t said no. 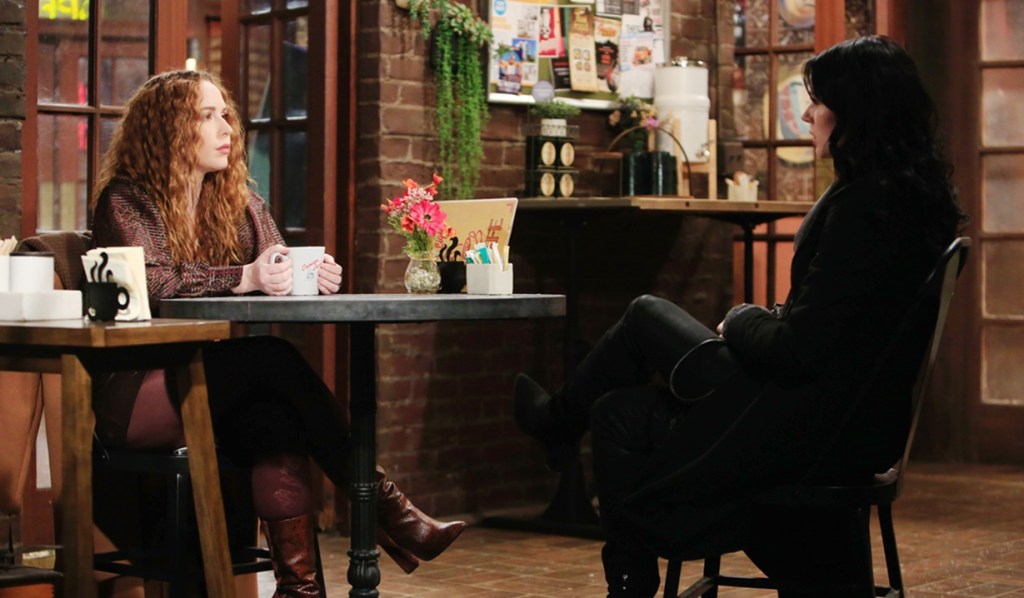 At home, Chance worries they’ve sent Mariah running for the hills with their direct approach. Abby stays silent as he suggests they may need to start thinking of someone else. Chance asks if she’s okay. Abby’s not surprised Mariah needed time. No matter what her choice is she won’t hold it against her. She’s ready for the ups and downs of this journey — she knows they’ll have a baby one way or another.

At Jabot, Summer and Kyle discuss Phyllis’ uncharacteristic advice not to act on what she found out about Sally. Kyle agrees with Phyllis, partly because he spoke to Sally. She knows and is scared — Summer’s got her right where she wants her. Summer worries Sally will feel her back’s against the wall and act out.

Sally arrives outside the Jabot boardroom in time to hear Summer tell Jack how enlightening her trip to Los Angeles was.

Next on The Young and the Restless: Rey wants Sharon to stay away from Adam.

View a Mariah and Tessa photo gallery below. Get your free daily soap-opera fix for The Young and the Restless — and all of the other daytime dramas — delivered straight to your email inbox by signing up for Soaps.com’s newsletter. 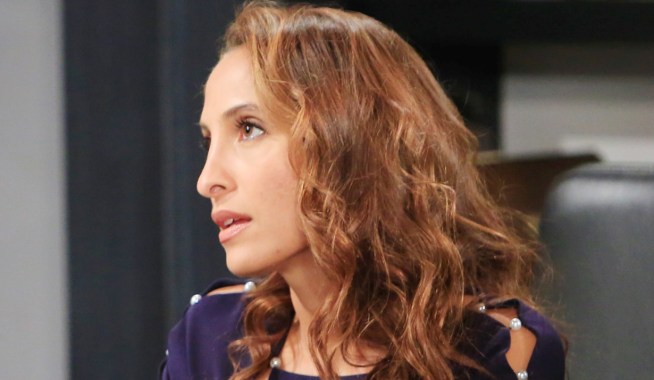 Summer Puts Sally on Notice After Her Trip to Los Angeles 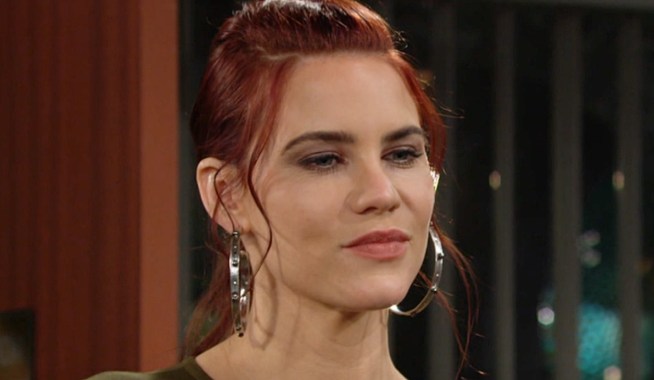