Monday, January 25, 2021: Today on The Young and the Restless, Lily and Amanda plan a girls' trip, Nate and Amanda talk, and Victoria's call to Billy leaves her upset. 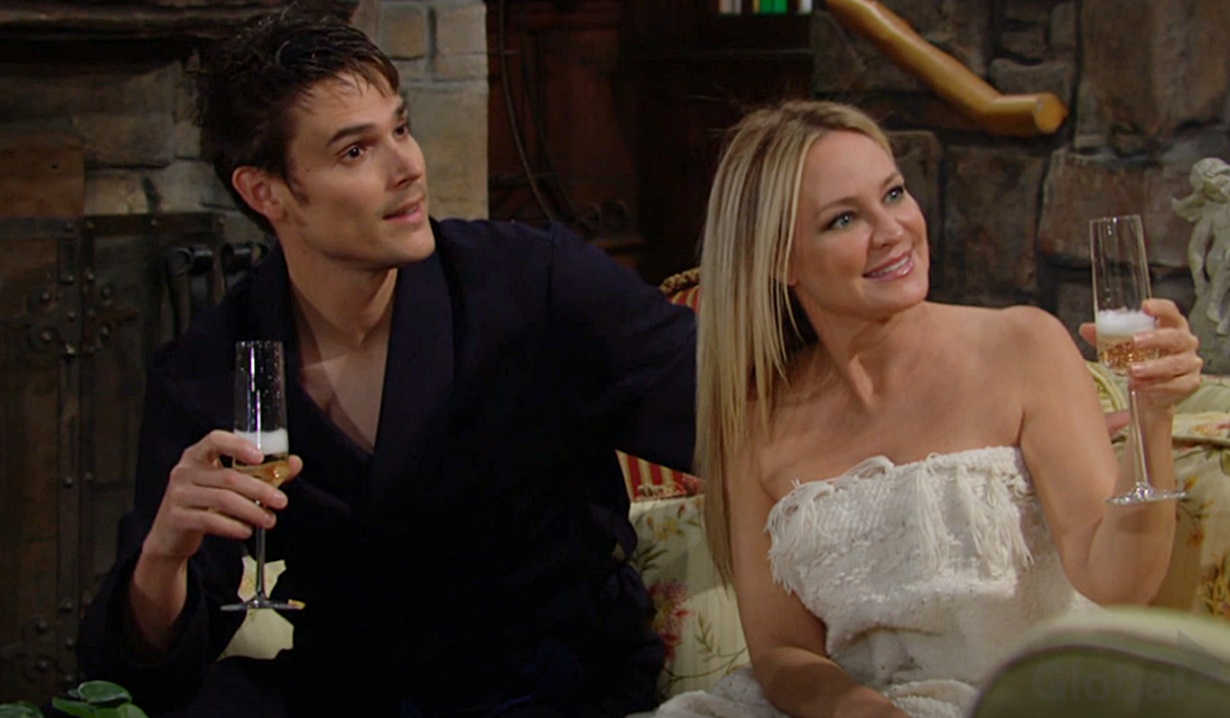 At Newman Enterprises, Nikki chastises Victoria for not delegating her work — their pilot is waiting! “You really need this getaway.”

At Chance Comm, Lily updates Billy on a lucrative media company up for grabs. Billy suggests he could bring the kids with him to Manhattan for the meeting so they don’t miss out, but Lily offers to go herself and loop him in by video chat.

Billy takes a call from Victoria, who asks him to be at her place by the time Katie gets home from school. Billy agrees, disconnects, and invites Lily to join him and the kids for dinner later. Lily insists they only refer to her as his co-worker. 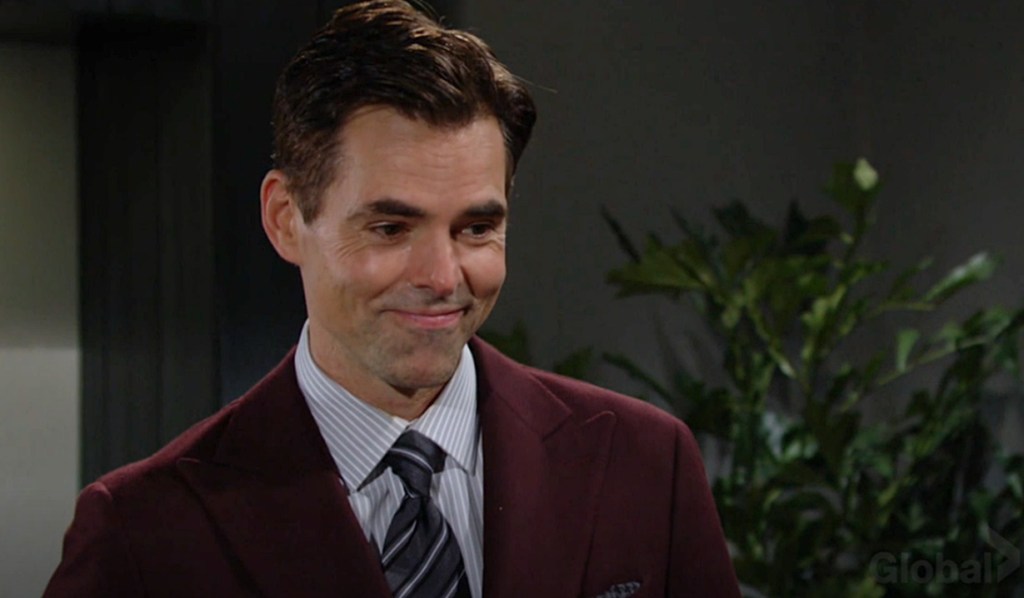 In the penthouse, Chelsea dreams she’s gotten her mobility and voice back. Excited, she stands up and calls out for Adam. While looking for him she ends up in Sharon’s house. Sharon’s asleep naked under a blanket on the sofa and Adam appears in a bathrobe. They have champagne and toast to her recovery. Horrified, Chelsea asks what he’s done. Adam replies, “What did you expect? This was bound to happen.” Chelsea snaps out of it as she screams, “No!” and awakens immobile in the wheelchair beside her nurse. 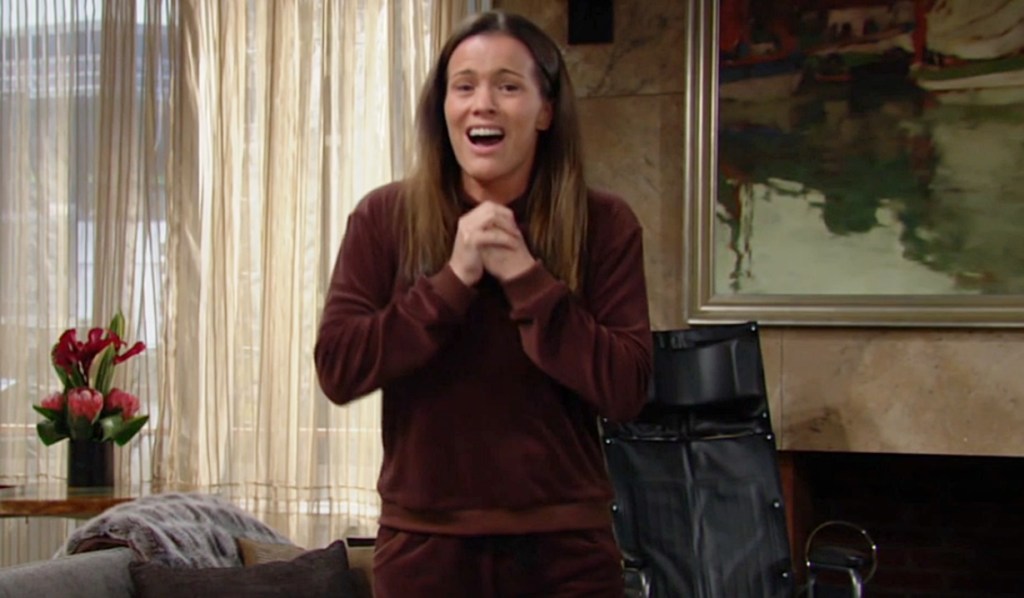 In Society, Adam thanks Nate for meeting him and relays that Chelsea’s recovery has stalled. Nate agrees it’s troubling. Adam may have a solution. They talk about stroke patients becoming depressed. Nate will recommend a therapist. Adam wants to hire Sharon. Nate’s surprised since she had him committed. Adam believes she was under pressure from his father. He concedes Chelsea and Sharon will never be friends but explains Chelsea has put their history aside in the past to accept Sharon’s help. 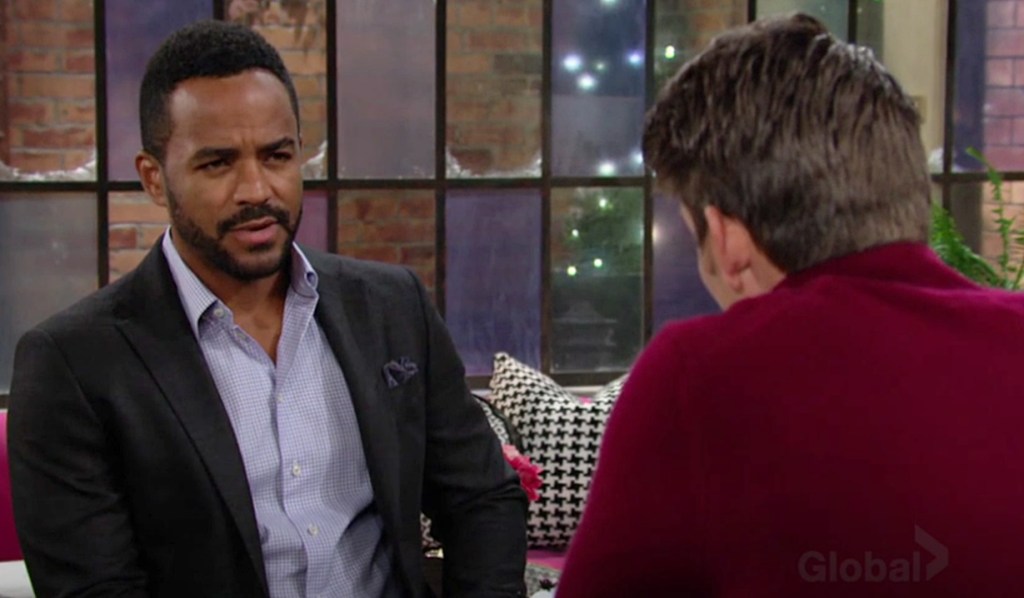 At Crimson Lights, Amanda offers to go to Manhattan with Lily, who warns they’d be gone about a week. Amanda’s fully on board and Lily enthuses about how much fun they’ll have. They marvel at Billy having to stay home and be responsible. Lily knows his kids are his top priority and wouldn’t have it any other way, but it is causing some issues. 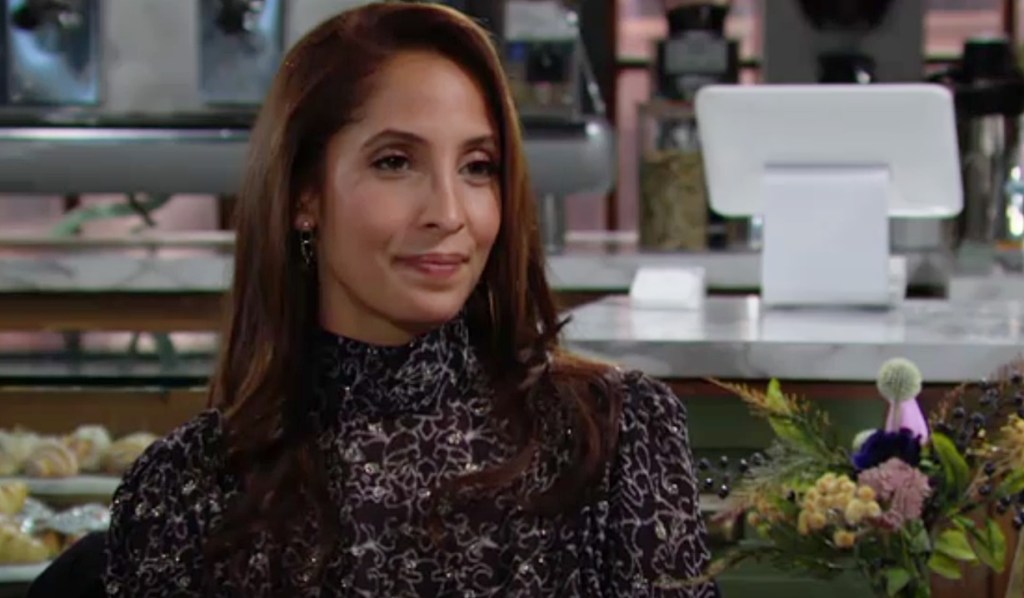 Amanda’s sorry it won’t be a romantic getaway for Lily but is pumped about the shopping. Talk turns to Naya. Amanda admits her emotions have been all over the place. She’s been rejected all over again and it bothers her a lot. She reflects on receiving the insulting restraining order from Imani after which Naya did nothing and fumes that her entitled half-sister threatened her career. Part of her would like to blow up her life. Lily muses, “You could go public with your story if you wanted to.” Amanda won’t now, but reserves the right to change her mind.

At Victoria’s house, she tells Billy her mom is forcing her to take a break. Billy agrees with Nikki. Katie appears and Billy teases they’re going to throw out all the rules when mom leaves. They do a goofy dance and Vikki laughs. Katie thinks maybe her mommy should stay with them but Billy insists she needs to go. Victoria tells him he’s a great father.

More: Y&R fans are not happy about Victoria’s storyline

Nikki arrives at Victoria’s house where Billy warns that Katie’s upstairs trying to talk Victoria out of going. Victoria appears. She thinks Katie’s coming down with something. Nikki orders Billy to put Victoria’s luggage in her car, then urges Victoria to teach Katie the value of self-care…unless she wants her to grow up to be a workaholic too. Vikki snaps, “I am not a workaholic!” Nikki challenges, “Prove it.” 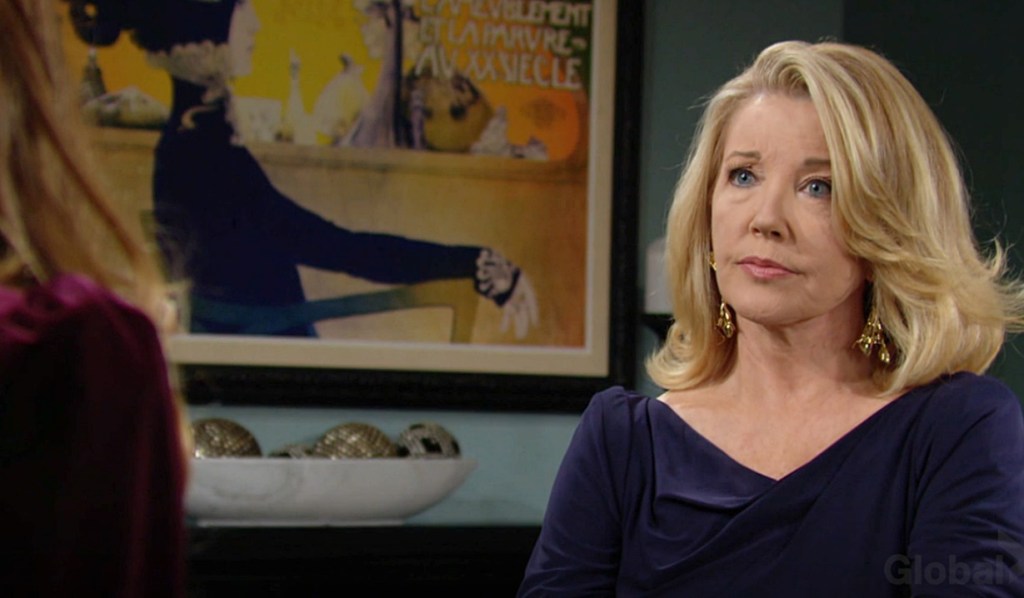 Adam arrives at home, relieves the nurse, and updates Chelsea that he spoke with Nate and everyone agrees that she needs additional help. They’ll bring in a mental health expert to boost her spirits. In her head, Chelsea snarks, “Let me guess who you think that should be.” Adam says, “I suggested we hire Sharon.” Chelsea’s thinks, “And there it is.” She blinks two times for no. Adam knows she doesn’t trust Sharon. Chelsea thinks, “I don’t trust you with her.” She fumes as Adam goes on about how great Sharon is and asks her to give it a try. Chelsea blinks once for yes. “Keep your friends close and your enemies closer,” she muses. Adam hollers for the nurse so he can go out.

More: Why is Y&R’s best drama happening in dreams?

Nate enters the coffee house, where Amanda invites him to sit and congratulates him on his new job with Chance Comm. She’s certain he’ll do great. She mentions his qualms about Moses. Nate was taken off guard initially, but now he’s inclined to say yes. Amanda wonders if he’s hoping to smooth things over with Devon. Nate muses that family is complicated sometimes. They discuss her situation and Nate asks if she regrets getting the DNA test. She doesn’t; she got answers and can deal with the rejection — Devon’s been there for her every step of the way. Nate’s glad they have each other to lean on. 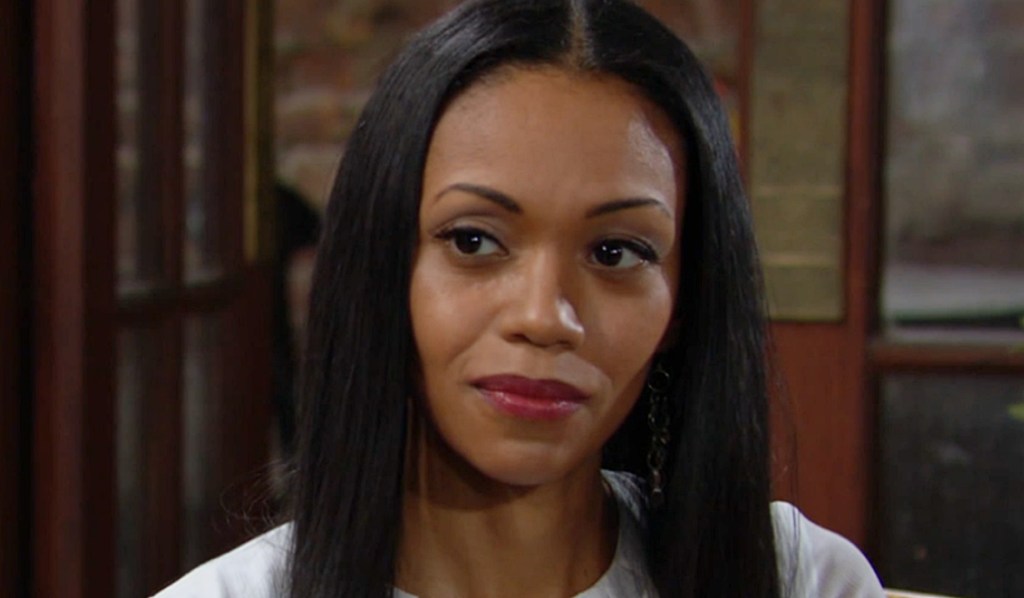 Billy brings Katie into the Chance Comm office and asks if she remembers Lily. Lily chides that it’s been a long time, but she remembers Katie and her brother. Billy explains they tell stories there. Lily starts playing a game with Katie while Billy beams.

At Sharon’s place, Adam asks her to help Chelsea by becoming part of her recovery team. He explains something psychological is blocking her progress. Sharon points out Chelsea was agitated by her presence the other day. That’s exactly why Adam wants Sharon to work with her. He relays that after Sharon left, Chelsea made a sound. Sharon realizes he wants her to agitate Chelsea. Adam wants Sharon to counsel her in a way that motivates her; she’s a fighter and needs something to push against. Sharon can’t believe she agreed to this, but will think about it. 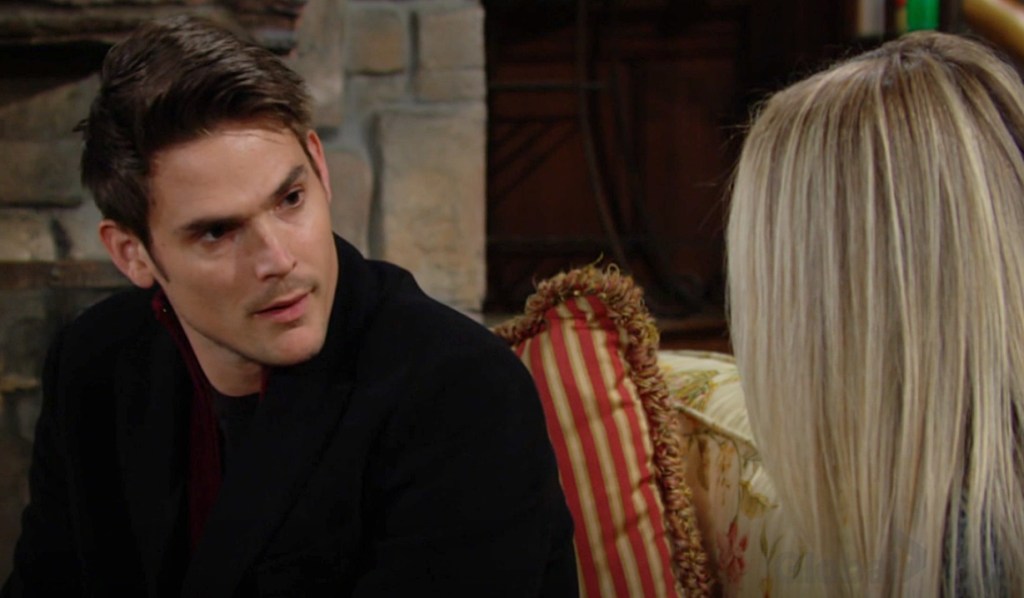 At home, Chelsea figures she can keep an eye on Adam and Sharon when they’re together. Maybe, if she can regain the use of her hands, she can use them to throttle her!

Victoria returns home to grab her phone and finds Billy and Katie gone. She calls Billy, who relays they’re at the office. Vikki hears Katie and Lily giggling and playing in the background. Tight-lipped, she says she’s glad they’re having fun, disconnects, and looks upset. 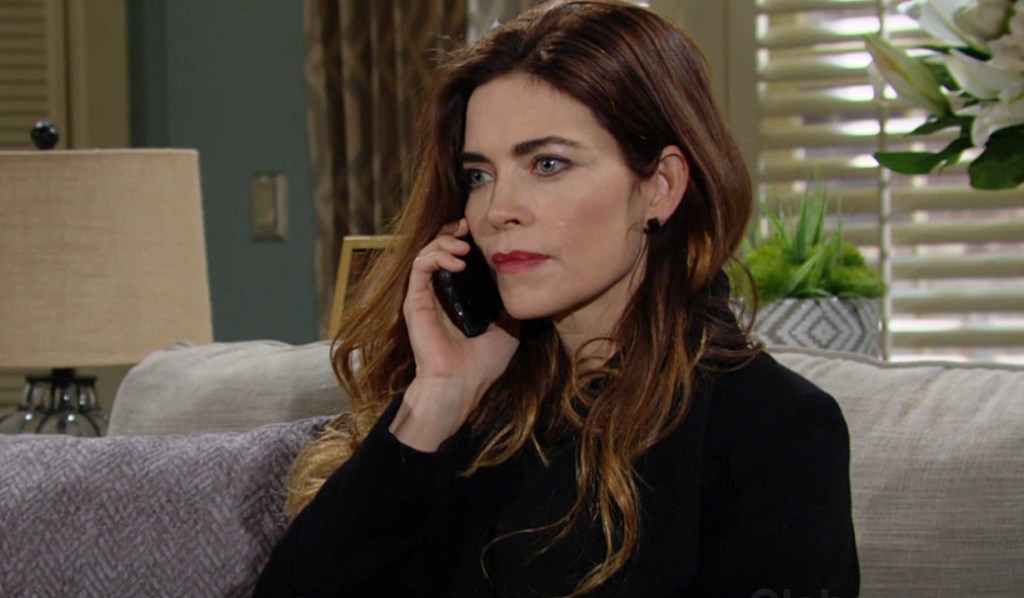 Next on The Young and the Restless: Devon makes Amanda a promise.

See a gallery of Adam and Sharon’s love story below — and find out why they really can’t be endgame here. Get your free daily soap-opera fix for The Young and the Restless — and all of the other daytime dramas — delivered straight to your email inbox by signing up for Soaps.com’s newsletter.

Gloria Blows Back Into Town With an...