Friday, January 22, 2021: Today on The Young and the Restless, Dr. Cavett expresses concerns, Rey questions Sharon about a gift, and Summer gets the scoop on Sally. 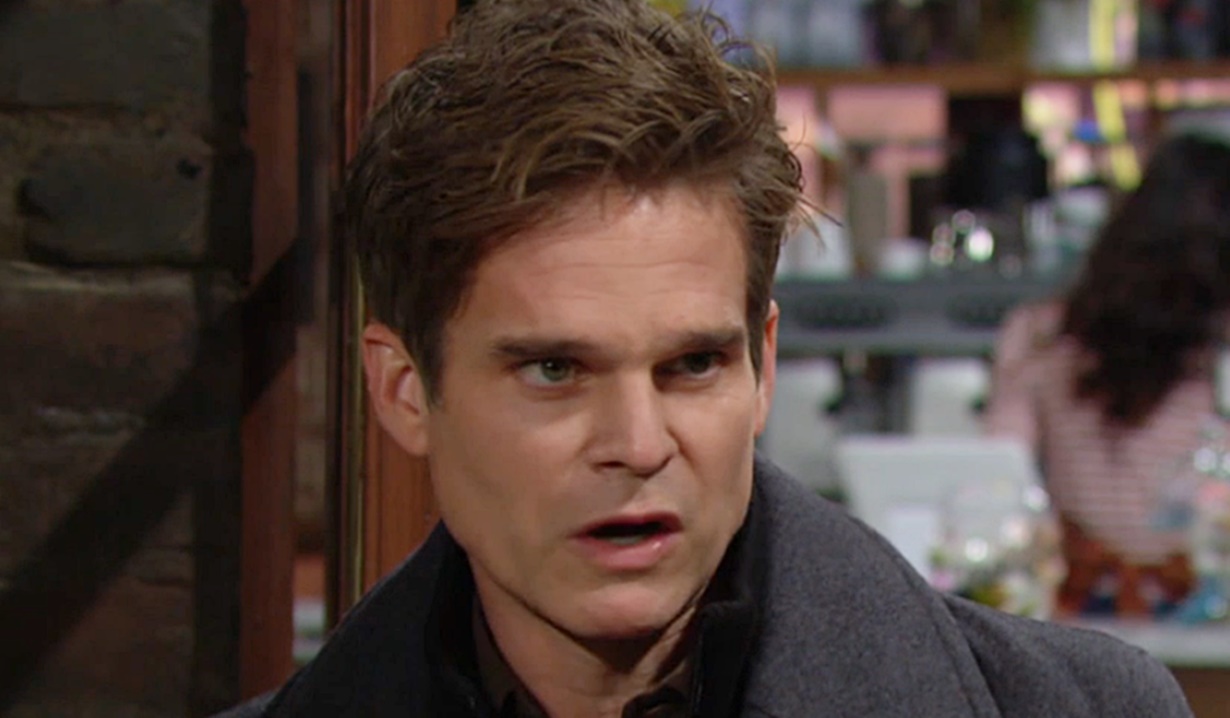 In the penthouse, Dr. Cavett tells Adam she’s concerned about Chelsea’s lack of motor skills. Adam tries unsuccessfully to get Chelsea to make a noise again. Frustrated, he explains that a friend stopped in right before Chelsea made the sound — maybe that had something to do with it. In her head, Chelsea fumes, “Sharon is not a friend. I was trying to warn you about her!” Dr. Cavett leaves, and Adam talks to Chelsea about coming clean with Connor soon before reassuring her again. “I love you.” Chelsea thinks, “You say all the right things. So why can’t you let Sharon go?” 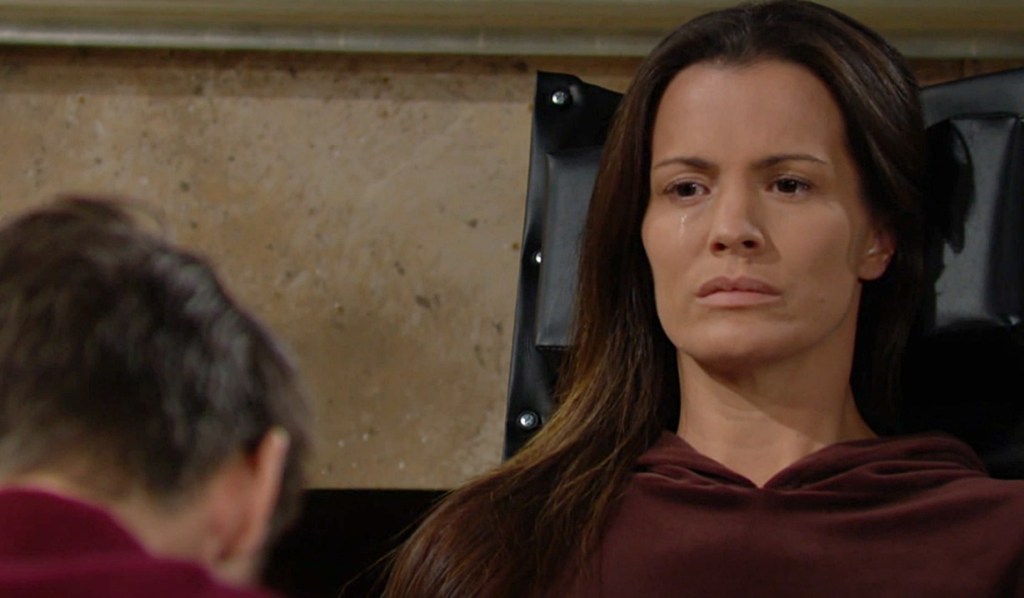 When Adam takes a call, Chelsea wonders if Sharon sees an opportunity here and whether she wrote endearments in the margins of the books she brought over. Adam reappears and announces he’s going out. Chelsea’s convinced he’s going to see Sharon.

More: How this character’s return could impact Y&R

At home, Rey informs Sharon she’s received flowers from Adam. She reads the card, which says, “Your kindness is appreciated. Warmly, Adam.” Rey decides to go see what game he’s playing, but Sharon stops him and admits she went over there with books. He was just saying thank you. Sharon reminds Rey they just got married and she loves him. He’ll never trust Adam but admires her gesture. Sharon sensed Chelsea wanted her to leave so she won’t be going back. 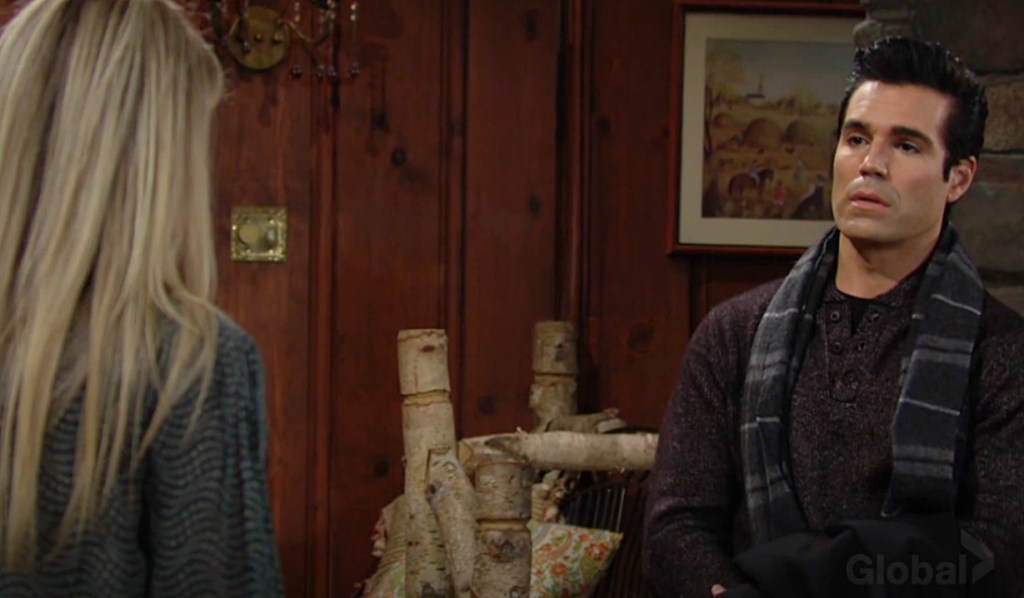 In Los Angeles at Il Giardino, Summer lets Kyle know via text that Flo’s just arrived. After talking about their outfits, Flo warns Summer that Sally’s a nightmare. Summer’s taken aback; it sounds like Sally really gave her a rough time. Flo relays that Sally plays the victim to dupe men. Summer admits she threatened to steal her boyfriend. Flo advises Summer to take it seriously and warns Sally will resort to kidnapping, lying, and trying to get pregnant to get her man. Summer’s stunned to hear she committed actual crimes.

More: Why Flo shouldn’t be playing the victim

Flo gives Summer the rundown on Sally’s extreme measures to try and get Wyatt back. She admits Sally had a tough upbringing and lost her parents, so people feel bad for her. Flo goes on to explain that Sally faked a terminal illness, so she encouraged Wyatt to move in with her. Summer thinks Flo’s a saint and asks where the kidnapping comes in. Flo exposed Sally and she knocked her out and tied her up in her apartment so she could seduce Wyatt and get pregnant with his baby. Summer’s jaw drops. 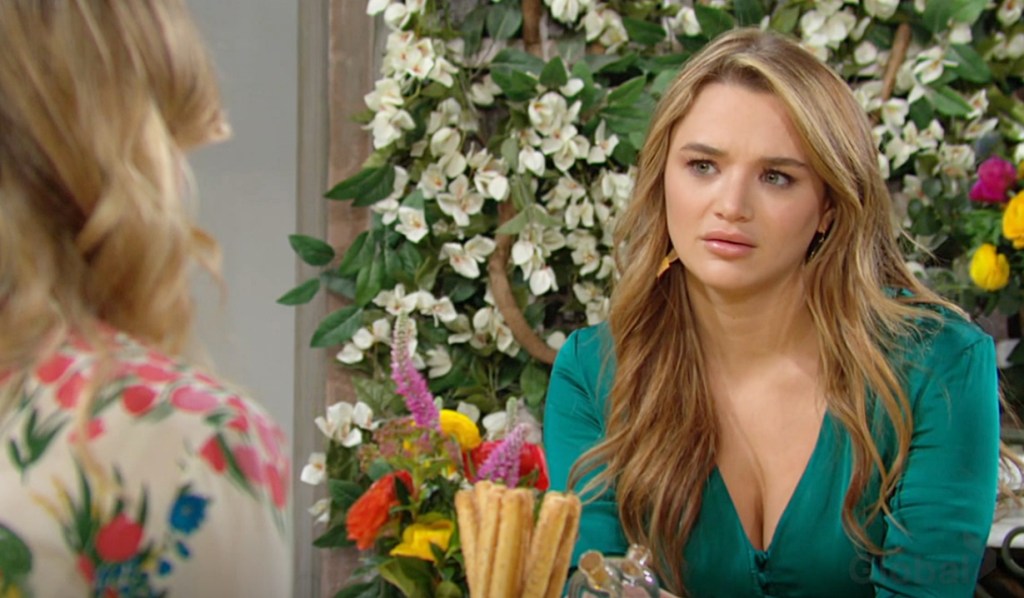 Flo sums up to Summer that Sally left Los Angeles in disgrace after everyone found out. Summer can’t believe she hasn’t heard about this — Sally’s had a clean slate until now. They decide to stay in touch and take a selfie together for social media.

Later, Kyle rejoins Summer who advises she has the lowdown on Sally and should be terrified but feels empowered. She wants to celebrate — the kind that starts with a bed, a hot tub, and a whole lot of room service. They cook up an old time movie romance story together and then rush off to their hotel.

At Society, Sally arrives to meet Lauren, who is with Jack. Lauren steps away to take a call and Jack wishes Sally luck with her proposal. She admits she’s nervous and ends up telling him he’s handsome. Jack teases he’ll have to put her on speed dial for whenever he’s feeling bad about himself. She encourages him to do so. Sally runs her pitch past Jack to get his feedback. He’s impressed and would be surprised if Lauren didn’t want to put her proposal in action right away.

At Crimson Lights, Kevin updates Chloe that he’s been dodging calls from Gloria. He’s glad to have dodged the drama and talked Phyllis out of her scheme. Chloe urges him to deal with his mother and leaves to see Chelsea. Kevin walks to the patio… only to see Gloria sitting there.

Glo snipes that thanks to Kevin she had to leave Los Angeles — he destroyed the one piece of evidence that would have secured her future. She claims she was trying to help the Newmans since her boss was conspiring against them and might have got a handsome reward for her good deed. Kevin grimaces as she relays she’s homeless and announces she’ll be moving in with him and Chloe. She also needs to find a job so he can keep her posted on leads. 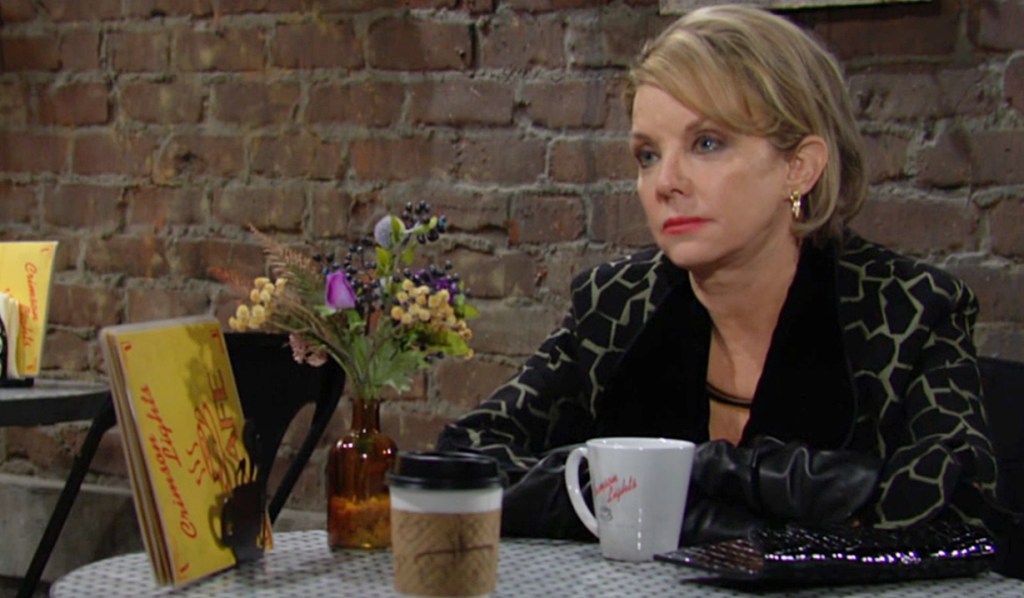 In the coffee house, Rey suggests a getaway over Valentine’s Day to Sharon. She’d love that. He leaves and Adam walks in. Sharon asks about Chelsea. Adam relays nothing has changed. She’s sorry and thanks him for the beautiful flowers. Sharon worries coming to his place was a mistake but he thinks it was a wonderful gesture. Sharon feels it upset Chelsea. Adam wishes she could get agitated. He steps away to make a call. 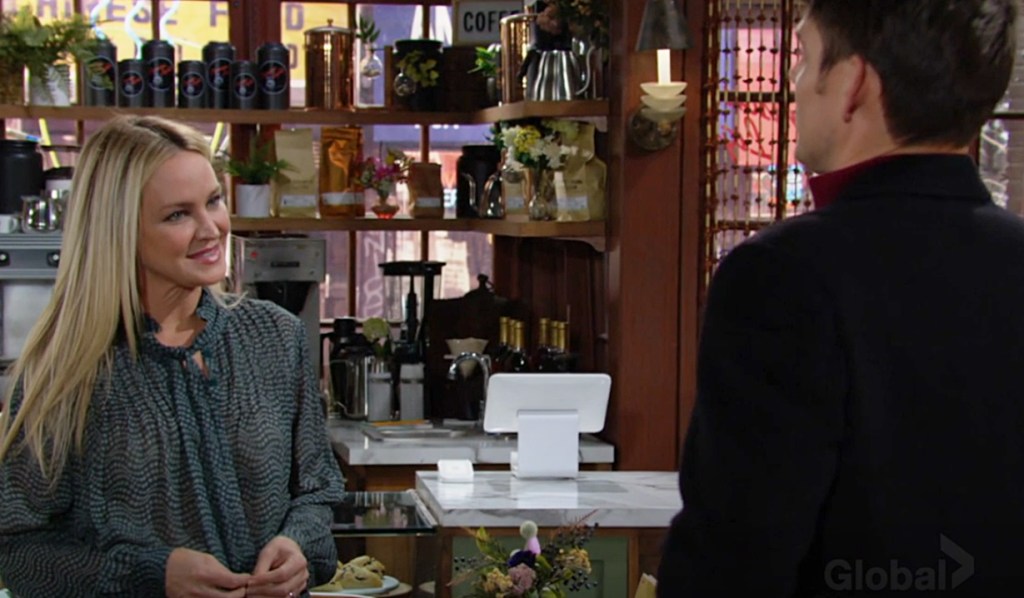 Dr. Cavett arrives to meet Adam. She admits Chelsea’s lack of motor response has affected both sides but should only have affected her right. The doctor tells Adam, “There might be another reason she’s not responding,” and reveals the issue could be psychological distress due to depression. She advises him to consider bringing someone in to help.

In the penthouse, Chelsea’s pleased to see Chloe and thinks, “I need an ally right now.” Chloe shows off a drawing Bella made of Chelsea’s family. Chelsea worries if Adam wants that or if he’s happy to have a reason to leave her there and go off to spend time with Sharon. Chloe senses something’s wrong. Chelsea tries to will herself to make Chloe understand.

In Society, Lauren’s blown away by Sally’s idea and teases she’ll expect this level of work on every project from now on. Sally feels maybe she’s finally found a home. Her phone pings and she looks at the selfie of Summer and Flo. Jack senses her dismay and asks, “Everything alright?” 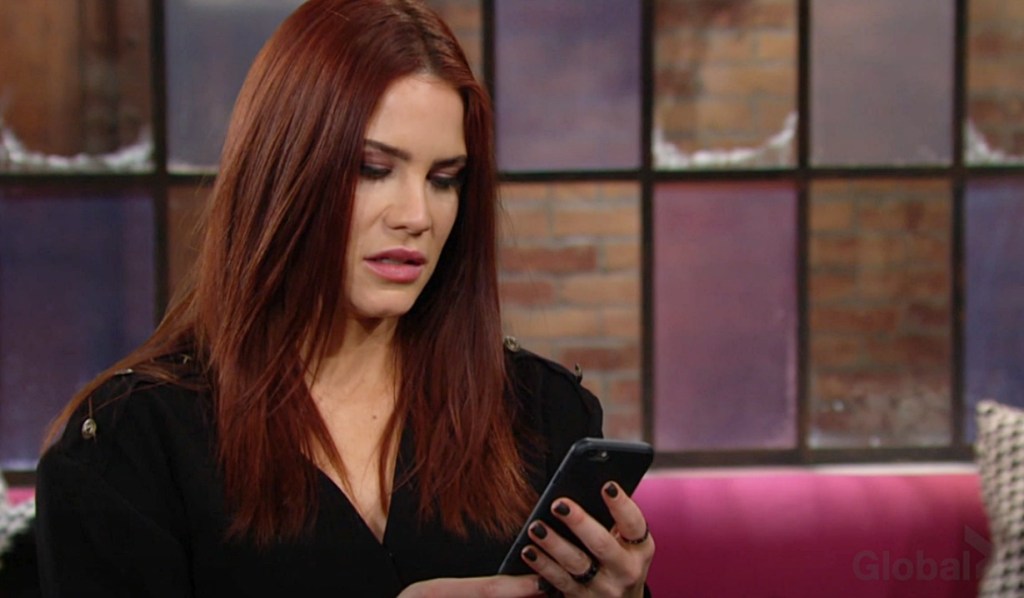 After Lauren leaves, Jack questions Sally and presumes she’s second-guessing herself. She covers that he’s right. Jack promises she nailed it and urges her to be proud. “You’re going to make a big impact around here.” Sally just nods.

Kevin and Gloria enter Society where Gloria calls out to a sputtering Jack. She relays she’ll be leaving L.A. for a while since Kevin and Chloe need her too much. Chloe arrives and gapes, “What the…” Kevin pulls Glo away and she shouts to Jack, “To be continued!” Sally asks, “Who was that again?” Jack demurs it’s a long story. Sally thanks him for his support. Once alone, Sally looks at the Summer and Flo selfie again. 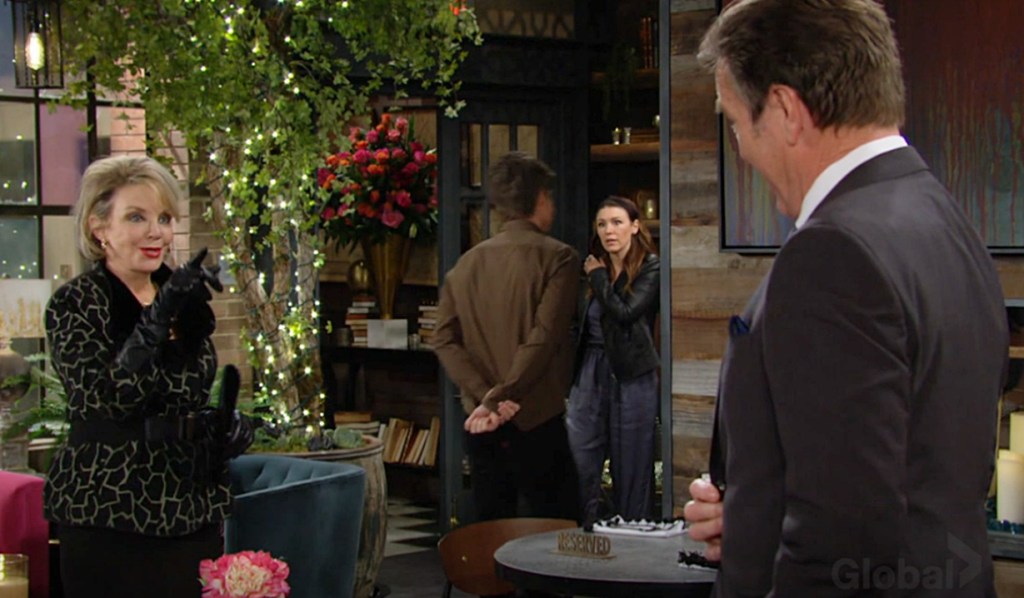 Rey returns to Crimson Lights where Sharon is on the laptop looking up information on stroke victims to help Adam. She closes the laptop before Rey can see and lies that she was looking up Valentine’s Day getaways.

In the penthouse, Adam chats to Chelsea about what they’ll do when she’s healed. When he gets no response, he texts Nate — he has an idea to run by him.

Next on The Young and the Restless: Nikki points Victoria in the right direction.

See a gallery of Gloria Fisher through the years below. Get your free daily soap-opera fix for The Young and the Restless — and all of the other daytime dramas — delivered straight to your email inbox by signing up for Soaps.com’s newsletter. 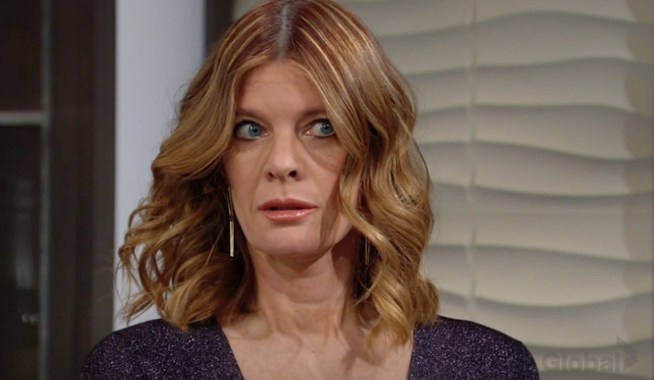 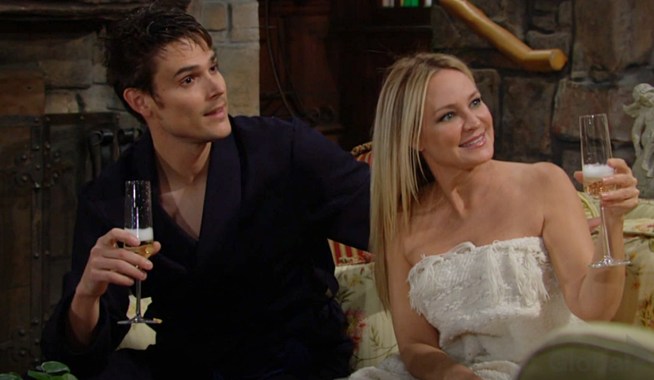