Friday, January 15, 2021: Today on The Young and the Restless, Abby's friends rally around her, Summer meets with Sally's ex-fiance in L.A., and Lauren makes an offer. 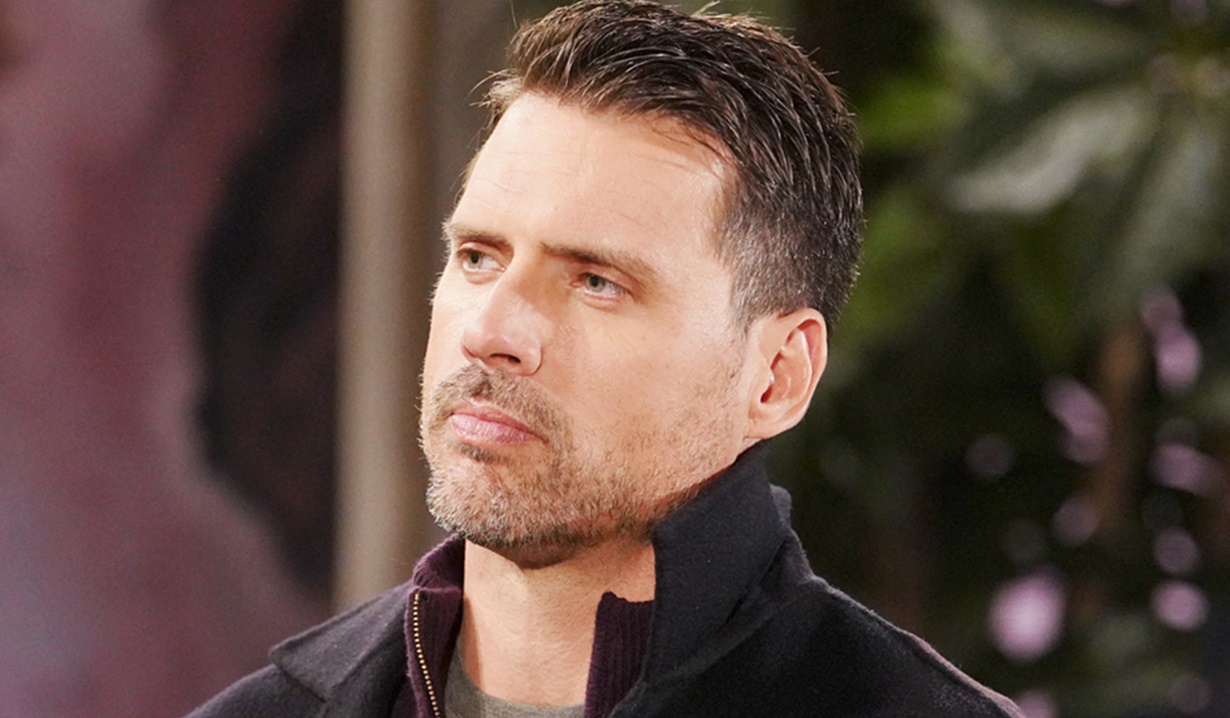 At Crimson Lights, Sally chats with Jack about the cold weather, then asks about Kyle and Summer’s meeting at Spencer Publications. Jack wonders if there’s a reason she’s uncomfortable with them meeting with the Spencers and wonders if he should still be worried about her and Summer. Sally admits there is something he should probably know. She’s nervous about what Summer might hear in L.A. — she worked really hard to get this fresh start.

More: The line Sharon never would have spoken

Jack asks how bad the stories are about her. Sally admits she’s done things that could be seen in a negative light. Jack finds Summer to be empathetic and urges her not to worry. Lauren comes in with news — she’d like Sally to come up with some design marketing strategies. Sally’s thrilled and rushes off. Jack tells Lauren she made her night. Lauren’s looking forward to seeing her ideas and hopes it will get her mind off JCV and Summer. 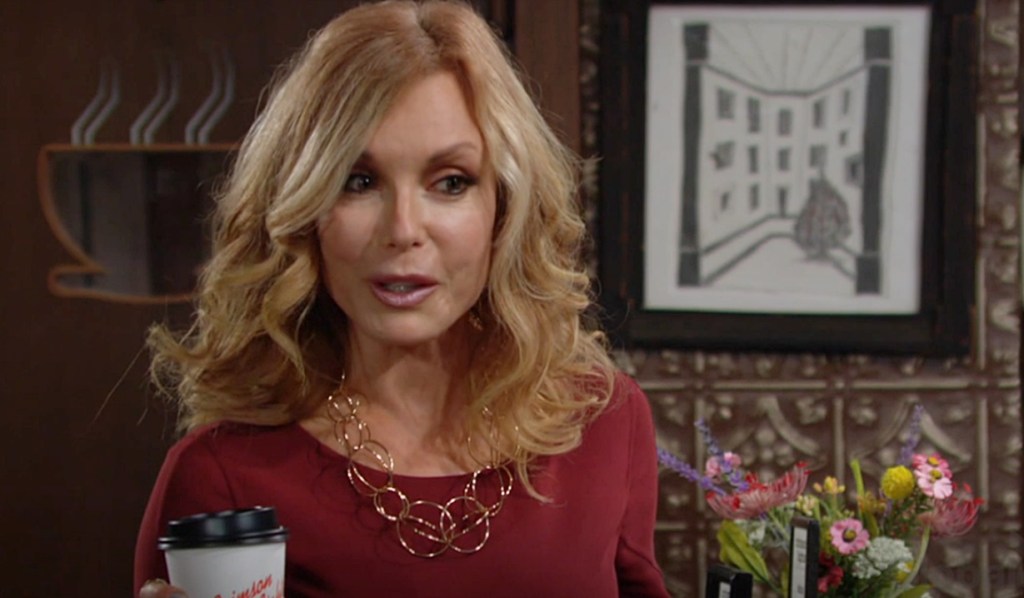 At Il Giardino restaurant in L.A., Kyle and Summer take selfies before going over Summer’s agenda to get information on Sally’s past. She figures if anyone knows anything, it’s Sally’s ex-boyfriend, Wyatt Spencer. Just then, Wyatt arrives and Kyle leaves them to talk. Summer and Wyatt discuss a media launch for JCV in Eye on Fashion. Summer’s pleased and says, “Oh! Before I forget, Sally says hi.” Taken aback, Wyatt asks how she knows Sally. 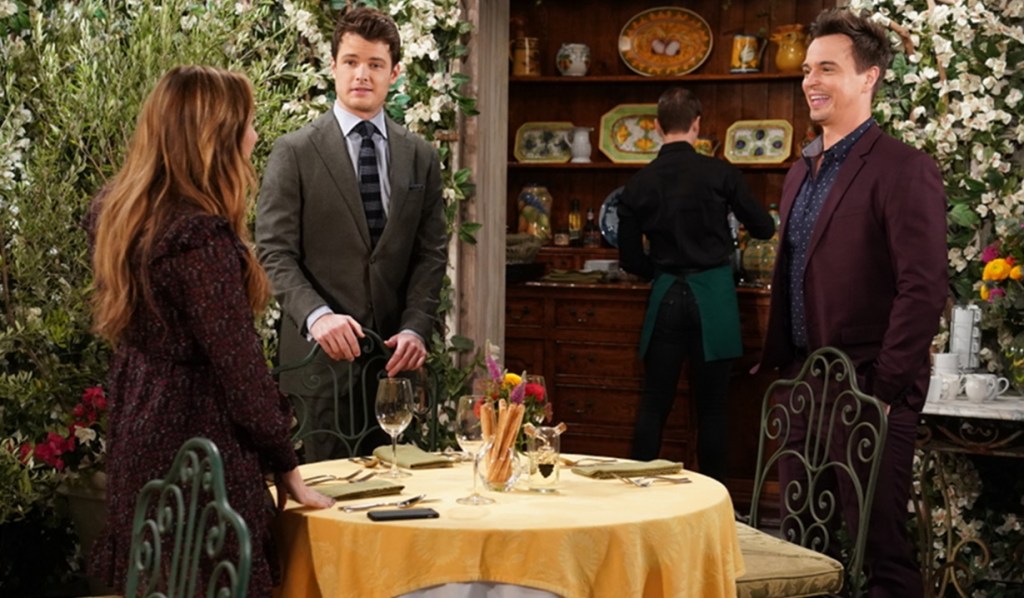 Summer tells Wyatt that Sally is working as Lauren’s assistant. Wyatt marvels that it’s a big step down for his ex-girlfriend — he’s surprised she accepted the position. Summer would like to know more about her. Wyatt and Summer arrange to meet up again. Once he leaves, Kyle returns. Summer relays she could tell by Wyatt’s expression that Sally has a juicy secret just waiting to be revealed. She’s also excited about the promo partnership but vows not to leave town until they find out what Sally’s hiding.

More: Find out when the crossover continues

In Society, Abby opens up to Mariah about her conception issues and her consequent worries. Her procedure is tomorrow and if it’s bad news, she doesn’t know what she’s going to do. Mariah asks her to hold that thought as she sends a text, then tries to reassure her — everything could be perfectly fine. As they chat, Mariah reveals she thought she could use cheering up. Tessa walks in.

Tessa announces she has come with the fun. Mariah turns on music and she and Tessa invite Abby to join them in dancing it out. Lola emerges from the kitchen and Abby yells across the room about her procedure and trying to lift her spirits. Lola will contribute chocolate to the cause. 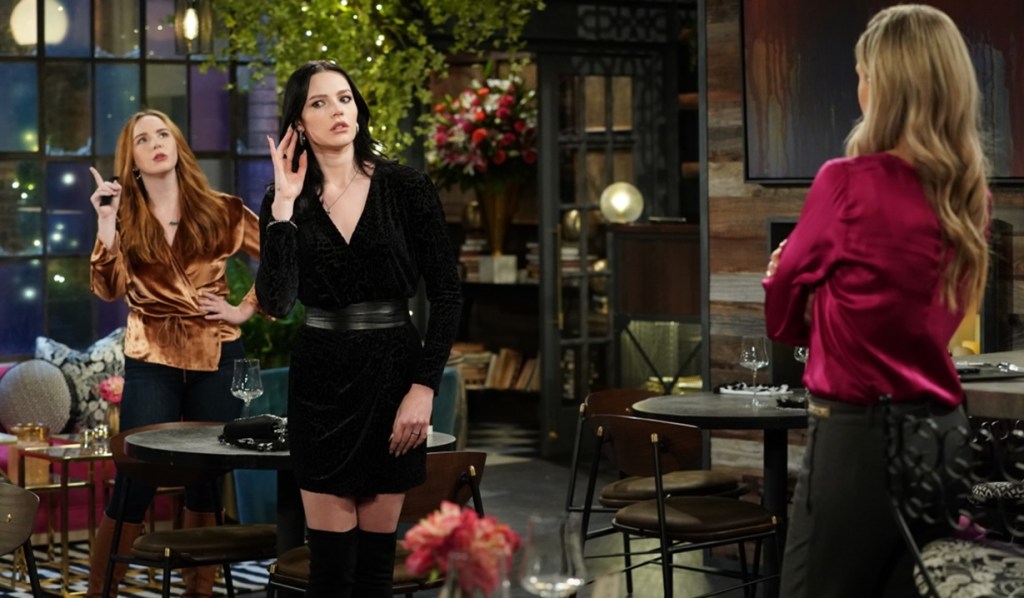 After the dance party, Tessa jokes about her awkward dancing as they all eat chocolate. Mariah invites everyone over for movies but Lola has to clean up and Abby wants to see Chance. They all wish her luck tomorrow. Abby thanks them from the bottom of her heart.

Victoria arrives at Grand Phoenix where she spars verbally with Phyllis about who won the game they were playing. Phyllis cryptically hints that she might have more moves in the future. Victoria mocks her for having to beg her brother for money and suggests she move on. Phyllis points out she’s in her hotel. Victoria mentions skating and ice cream with Billy and the kids before going to meet a head-hunter. Phyllis wonders if she’s looking to replace the CFO who resigned from the Los Angeles office.

Victoria stops in her tracks, then replies, “You obviously have something to tell me, so why don’t you just do it.” Phyllis perches on a chair and reveals she knows Victoria’s CFO was embezzling funds and she covered it up to keep Victor from finding out. Victoria’s momentarily speechless then asks what she plans to do with the information. She presumes this is a prelude to blackmail. 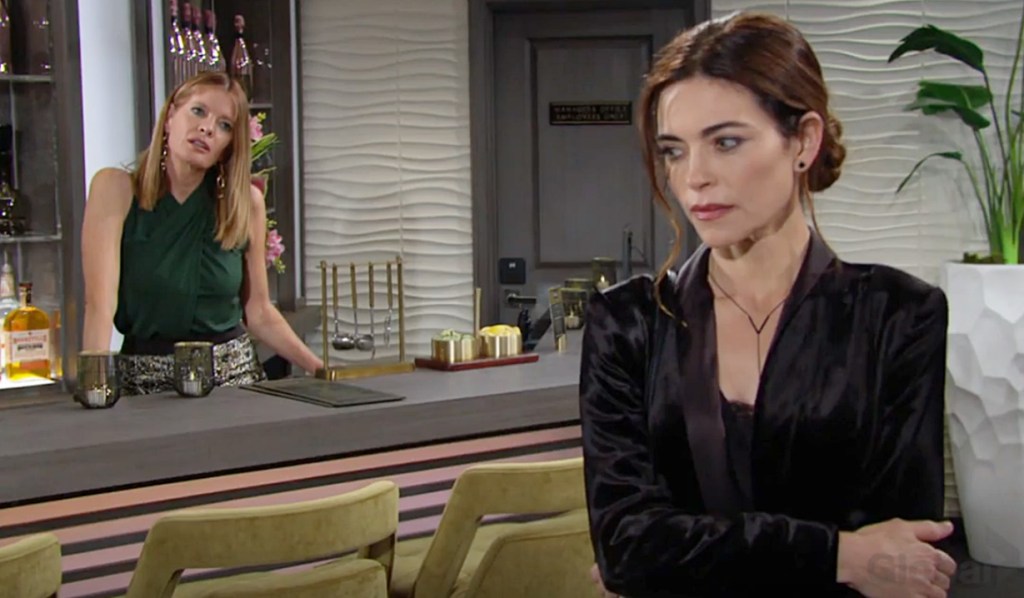 Phyllis tells Victoria she considered blackmail but decided to pass. However, she wanted her to know she had the power to destroy her and chose not to. She can always use it against her if she gives her a reason. Victoria questions the morality of her choice. As Victoria walks away, Nick appears. “Do you want to tell me what that was about?” Phyllis tries to blow off his question but he won’t let it go.

More: What Y&R needs to do

Phyllis admits she has blackmail information on Victoria. She took the high road but still needed to rub her nose in it. Nick learns Victoria covered up something at Newman that Victor doesn’t know about it. He guesses she got the info from Kevin. Phyllis confirms it; he talked her out of using it. She adds, “I had too much to lose.” When Phyllis says she won’t extort Victoria, Nick shrugs, “That’s too bad. I think I would have enjoyed watching you give Victoria a taste of her own medicine.”

Phyllis marvels that Nick would have been okay with her blackmailing his sister. He wouldn’t want Phyllis to risk what she’s worked for but he’d like to see Victoria catch some heat from Victor. Nick is proud of her for doing the right thing. Phyllis coos, “How proud of me are you?” Nick will take her upstairs and show her. 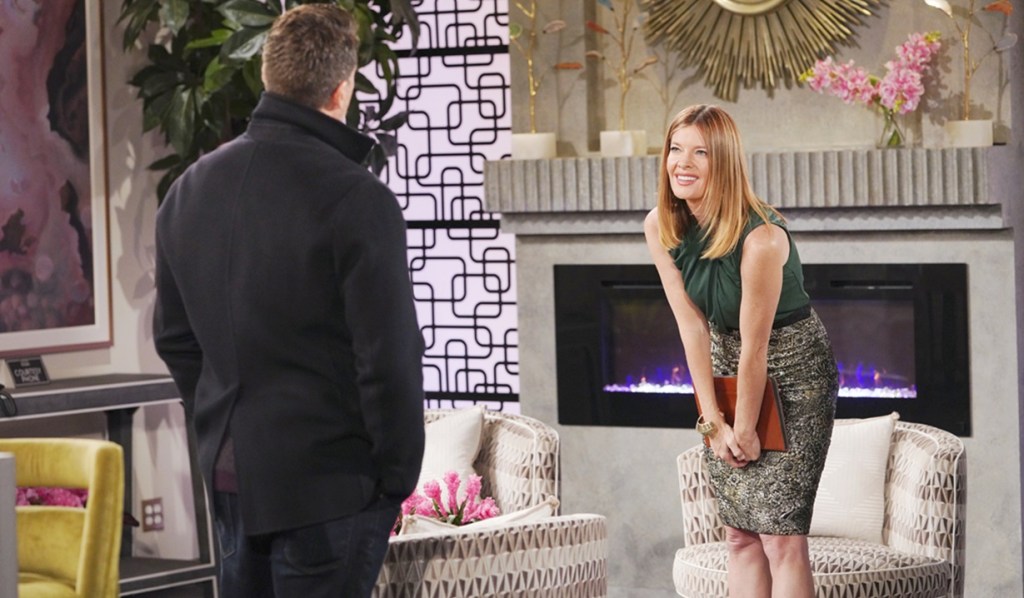 At home, Faith gets a text from Jordan. They discuss her parents being suspicious of Jordan and the older teen assures Faith she’ll win them over. Faith phones her friend and tells her it would be great if she could convince her parents she’s her guardian angel, but not yet; they need to cool off first. They’ll figure out a way to see each other.

At home, Abby finds the parlor full of red roses and opens a card from Chance who is going to be later than he thought, but is thinking of her. She imagines Chance videotaping her holding their baby in the room. With lifted spirits, Abby phones Chance and says she thinks tomorrow will be a wonderful day. 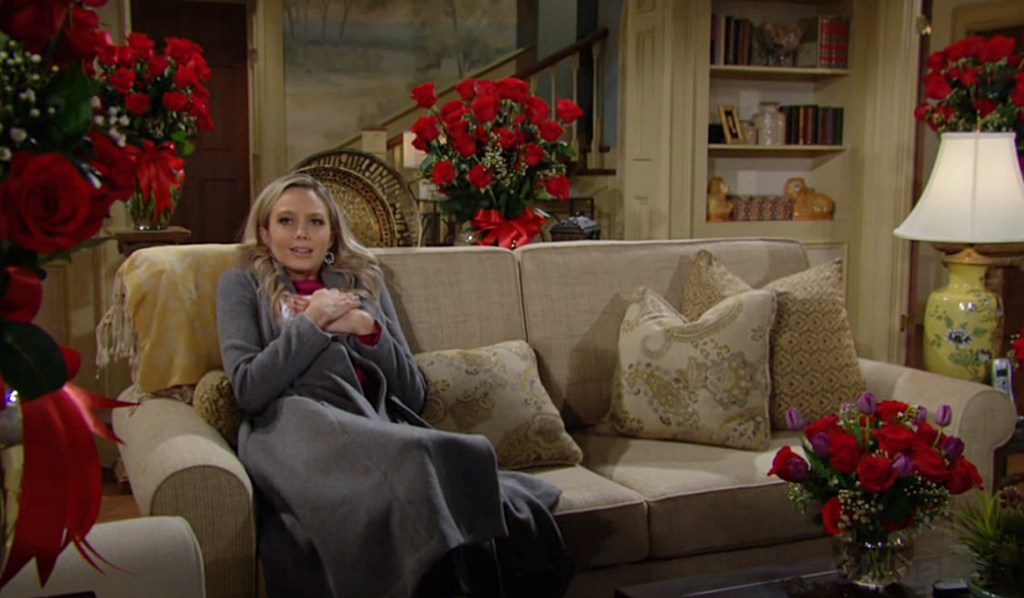 Still at Society, Tessa and Mariah remark on how Abby and Chance’s baby would be born into a loving family — much different than the way they grew up. Lola asks if they’ve talked about having children. Mariah doesn’t think they’re ready now. Tessa would like to in the future. Mariah wonders if Lola wants kids. Lola recalls she and Kyle had a scare that got her thinking about it. She’d like them someday but doesn’t even have time to date; Society’s her baby. A sad look crosses her face as she returns to the kitchen. Tessa and Mariah agree they’re never happier than when they’re together. 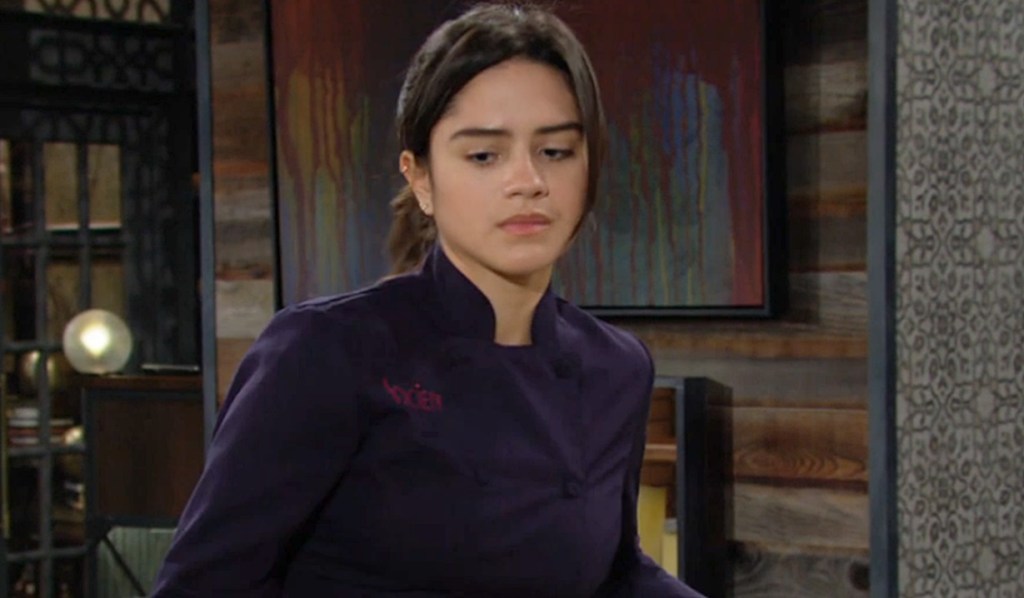 In L.A., Summer takes a call from Wyatt, who has set up a meeting with his father. Summer hopes she didn’t open any old wounds where Sally’s concerned. She disconnects and tells Kyle she’s one step closer to finding out why Sally left L.A.

Next on The Young and the Restless: Victor makes progress with Adam.

See a gallery of Nick and Phyllis’ history below. Get your free daily soap-opera fix for The Young and the Restless — and all of the other daytime dramas — delivered straight to your email inbox by signing up for Soaps.com’s newsletter. 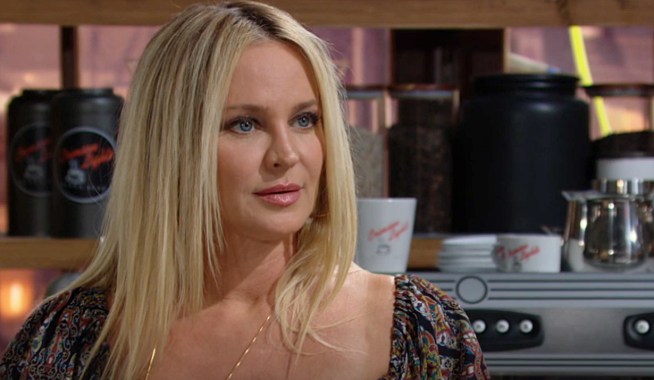 Adam Makes an Admission to Sharon as Chelsea's Progress Stalls

Traci Steps In After Abby Receives Heartbreaking News From Her Doctor 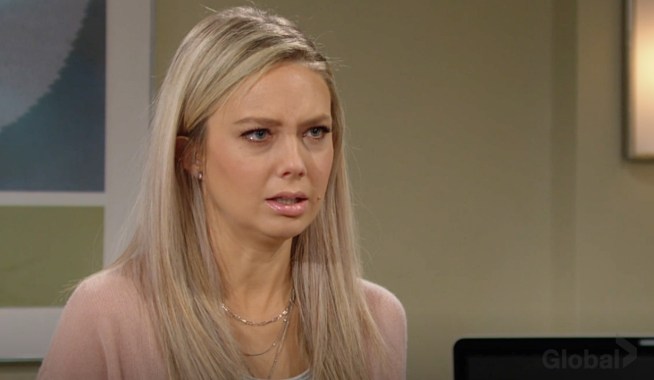