Monday, January 11, 2021: Today on The Young and the Restless, Nikki questions Nick, Faith lashes out at Adam, and Naya arrives in Genoa City. 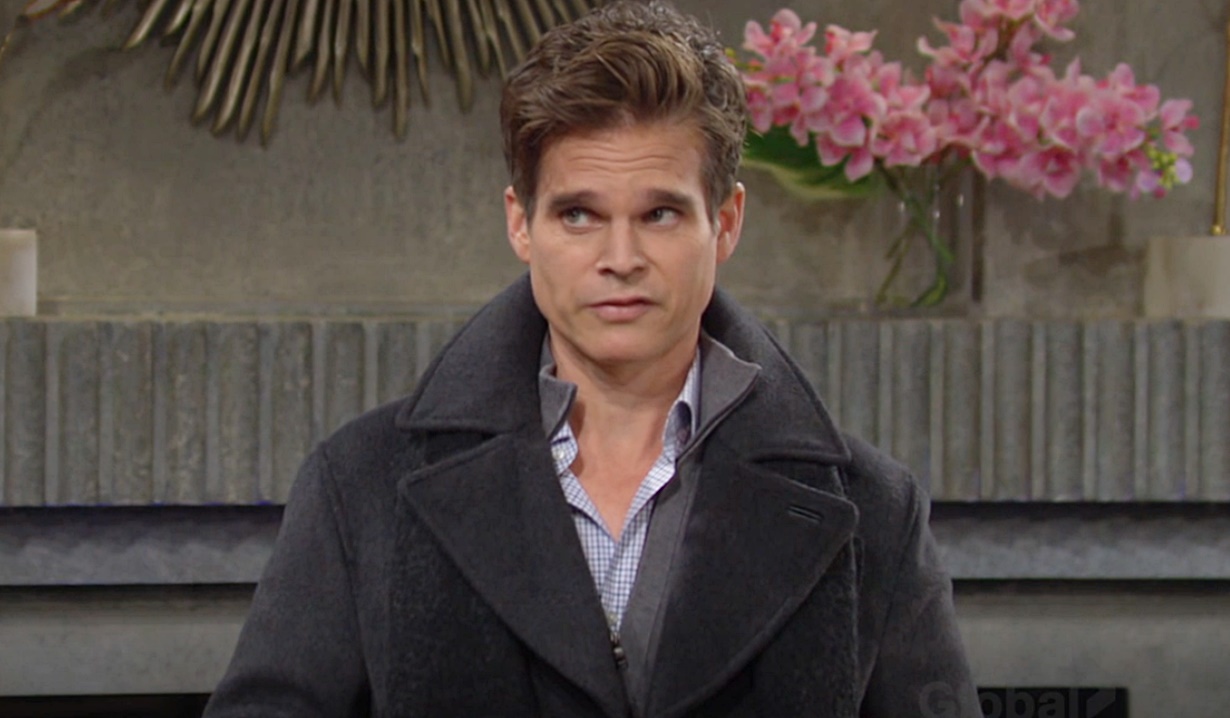 On the Abbott jet, everyone is stressed after an emergency landing. Lily asks if they’re stranded. Kyle relays they’re in Colorado. Billy snarks at Kyle that if they’d gone to Seattle first as he suggested they wouldn’t be in this situation. Kyle barks back that it’s the Jabot jet. Summer and Lily intervene. Lily suggests a game of Truth or Dare to pass the time. The pilot comes on to caution they may be there the rest of the night. Billy and Kyle, bickering, decide to go find a hotel.

Still on board, Lily asks Summer if Kyle and Billy are always like that. Summer, uncomfortable, says it’s due to their competitiveness. Lily frowns; that was a long time ago. They talk about Lily and Billy falling for one another. Lily demurs that they’re just seeing where it goes and references how they dated a long time ago. Summer can relate; she’s known Kyle basically all her life and feels they’ve finally got it right. Lily smiles that Billy can be very charming. Summer says she saw his appeal at one point, then hastily covers that she was referring to when he was dating her mother. Lily reassures her it was fine to bring it up but takes note of Summer’s sudden discomfort. 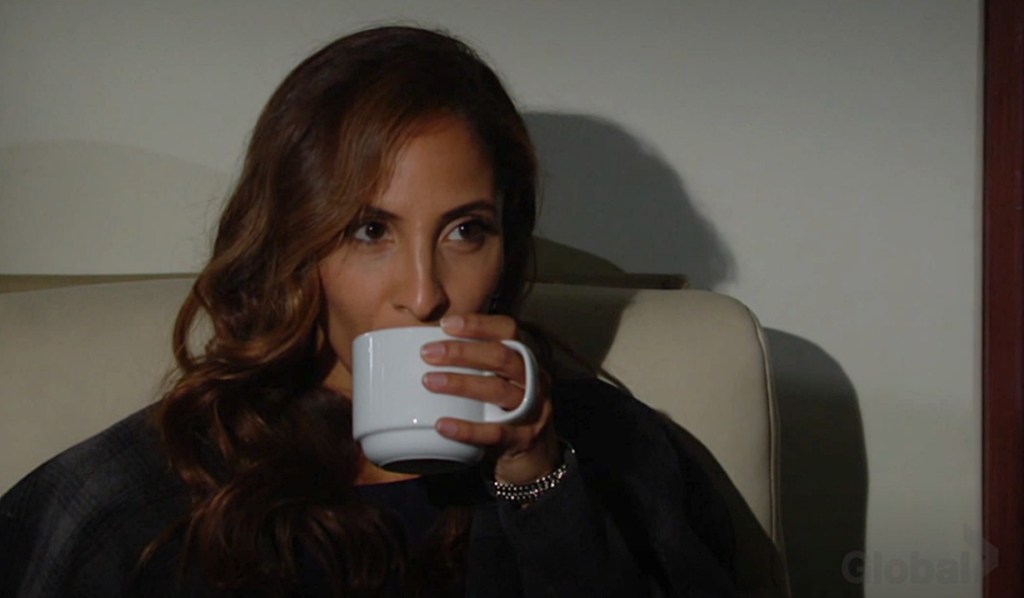 More: Details on Summer and Kyle’s trip to Bold & Beautiful

Outside her home, Naya tells Amanda she shouldn’t have come — she only has one daughter. Amanda snaps they both know that’s not true and calls her out for lying to Imani. She needs answers. Naya denies having the answers she’s looking for and tries to close the door, but Amanda stops her. She asks why she left Hilary with Rose while she ended up in a foster home in Madison. Amanda just wants help filling in the blanks in her life. “Don’t you owe me that much?” 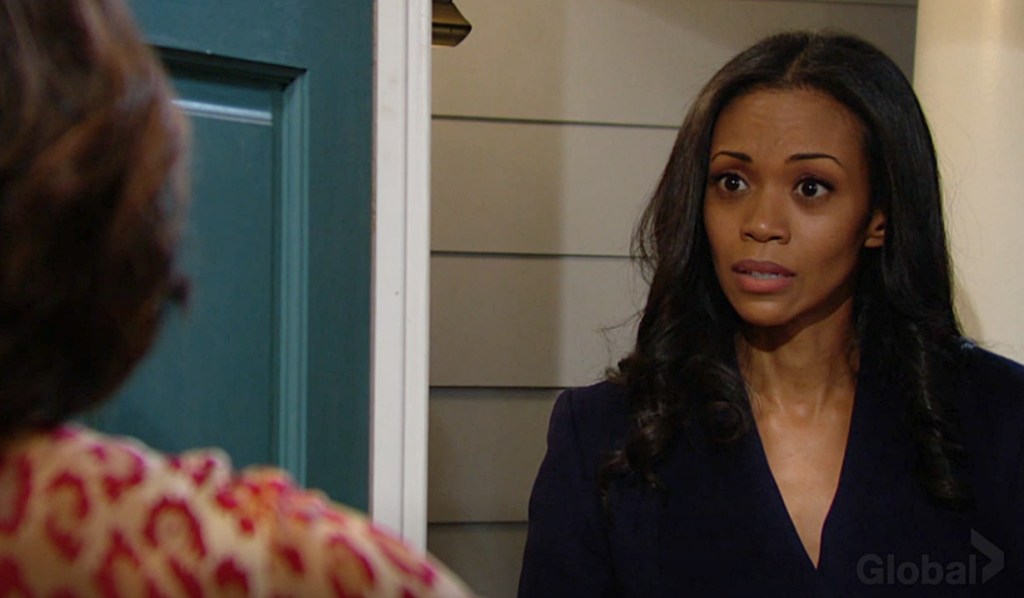 Naya relents, but can’t risk her husband seeing them. She won’t tell him about her; the family can never know. Once she has her bases covered there she’ll come to Genoa City. Amanda’s reluctant to trust her, but Naya promises she’ll come.

At Society, Nikki and Victoria discuss Chelsea’s situation. Victoria learns Victor hired specialists and sneers, “Of course he did.” Nikki explains Chelsea takes priority over their conflict. Vikki thinks Adam is using this to wrap their father around his finger again. Nikki relays Victor believes this may finally be the wake-up call Adam needs, but Victoria vows Adam will turn on Victor again. Nick arrives and isn’t happy to see Victoria — he thought he was just meeting his mother. 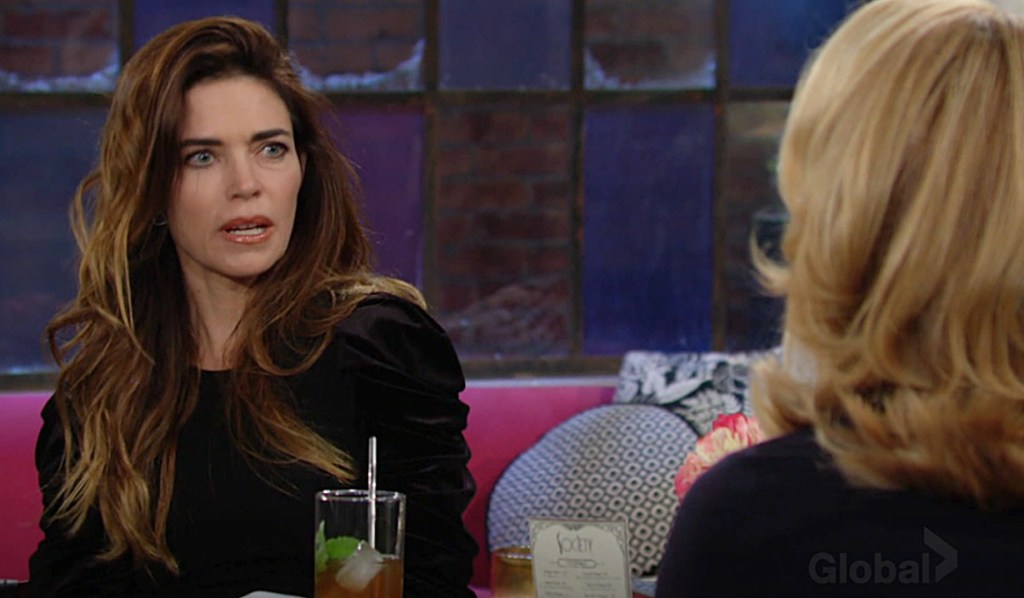 Victoria leaves, and Nikki asks Nick about the tension between them. Nick updates her on the situation with the hotel. “Vic took things too far and I’m not going to let it slide.” They debate the issue and Nikki urges Nick to find a way to get past this. Nick states that Victoria is becoming more like his dad every day and Nikki’s making excuses for her in the same way. He won’t put up with it.

At the penthouse, Adam gives Chelsea a pep talk after her tough therapy session and assures her they can do this — she just has to believe. The doorbell rings — it’s Chloe. She tells Chelsea she’s been thinking about her every minute and is grateful that Adam called her over. Adam points out they both love her. 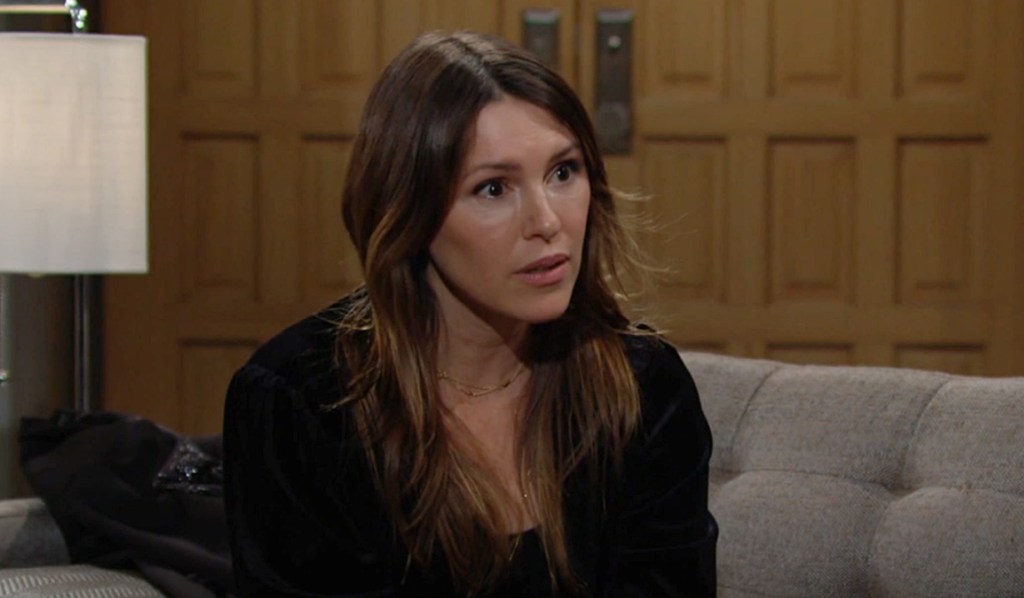 Adam leaves Chelsea with Chloe, who admits to her friend that he’s taking good care of her. Chloe has something to brighten Chelsea’s day. She shows her baby photos but notices Chelsea seems put out. She apologizes and promises she’ll get her life back. Chloe’s also sorry for telling her how to live her life; she just wants her to recover. Chelsea blinks her approval for a fresh start.

In her suite, Phyllis gets a text from Kevin wanting to meet. She chats with Nick before replying, “This better be good.” After, in the lobby, Nick and Phyllis part ways and Kevin pops out. Phyllis asks if he has the flashdrive. Kevin warns she’s getting ahead of herself. Phyllis knows what he wants and invites him upstairs.

In her suite, Phyllis assumes Kevin wants to negotiate his cut and enthuses about Victoria paying for her silence to avoid her father’s wrath. She gleefully says, “We’ll be rolling in it.” Kevin informs her it’s not going to happen and he’s sorry he mentioned it; he’s not interested in blackmailing Victoria. Phyllis will keep his name out of it, she just needs the flashdrive. They debate as Phyllis complains she needs to pay Nick back and Victoria deserves what she has coming. Kevin warns it will come back to bite her; it always does. He’s made the flashdrive disappear for good. Phyllis freaks and can’t understand him turning his back on a pile of money. 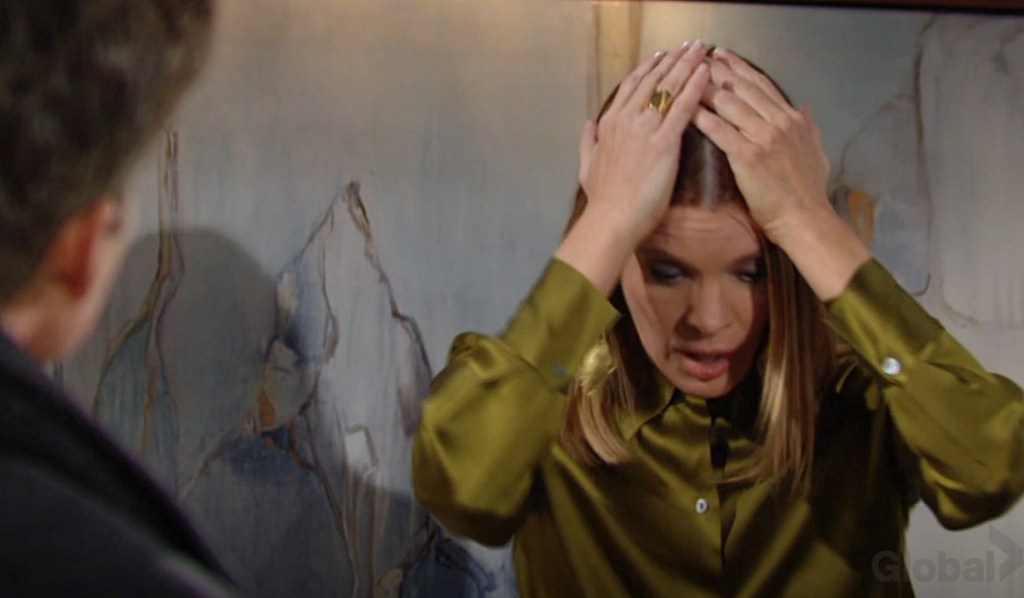 Kevin reminds Phyllis how far they’ve both come; it’s not worth the risk. He suggests she pay Nick back the way normal people do it and rise above her issues with Victoria — like the Phoenix. Phyllis talks about constantly having an angel and a devil on each shoulder. Kevin quips, “There’s an angel?” Phyllis warns that if she decides to go with the devil side, Kevin’s not the only game in town. Exasperated, Kevin says she doesn’t need another game. “You’ve already won. What is it going to take for you to see that?”

At Crimson Lights, Faith is with Mariah when she gets a text from Jordan calling her a loser and asking why she’s not at the party. Faith doesn’t reply. Suddenly, Adam walks in. Faith asks why he’s not gone; he doesn’t deserve to live in the same town with all the people he’s hurt. He explains he and Chelsea had a setback, but they’ll be gone soon and everyone can move on. Faith hollers that her mother has already moved on and is on her honeymoon with Rey. Adam’s happy for them. Faith, exasperated, hollers, “Who cares if you’re happy!” She hopes her mother never has to see him again. 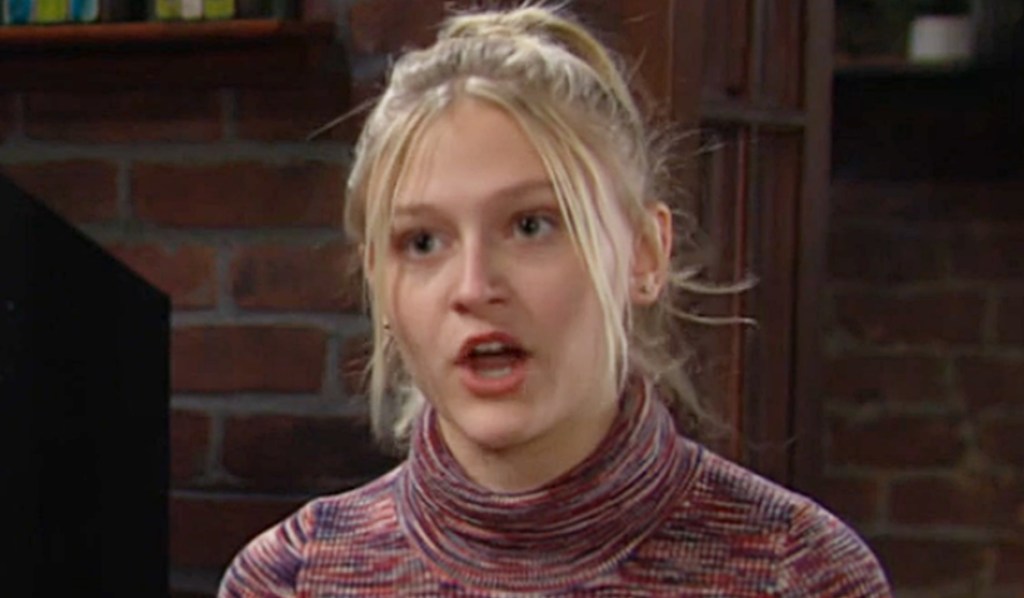 After, on the patio, Mariah asks if Faith’s okay. Faith insists she just needed to vent. She texts Jordan and asks to meet — she could use a friend.

Billy and Kyle return to the jet with good news and bad news. Billy relays the good news is they didn’t kill each other, the bad news is the nearest hotel is thirty miles away. “Settle in. It’s going to be a long night.”

More: A juicy secret may impact this Y&R couple

Amanda turns as Naya enters the hotel lobby. Naya would like privacy so they’ll go upstairs. As they walk to the elevator, Naya, breathes, “Let’s get this over with.” 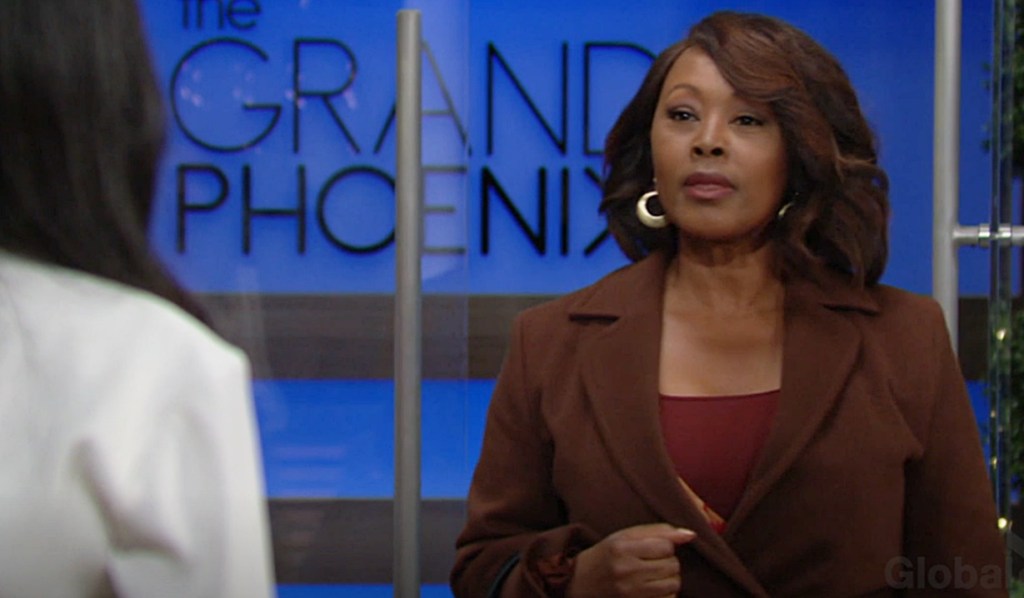 Nick enters the hotel lobby and greets Kevin, who is still with Phyllis. Kevin pointedly tells Phyllis he hopes she got as much out of their conversation as he did, then leaves. Nick updates Phyllis that he and Nikki aren’t seeing eye-to-eye about the way Victoria’s treating her. Phyllis doesn’t want to create conflict for them. Nick says his mother understands he has reason to be upset with Victoria and she’ll have to accept the fact he’s standing by Phyllis’ side. Phyllis chokes up — she’s lucky to have him. Nick feels they’ve both got it good — if she forgets that he’ll remind her. Phyllis says he won’t have to remind her anymore. 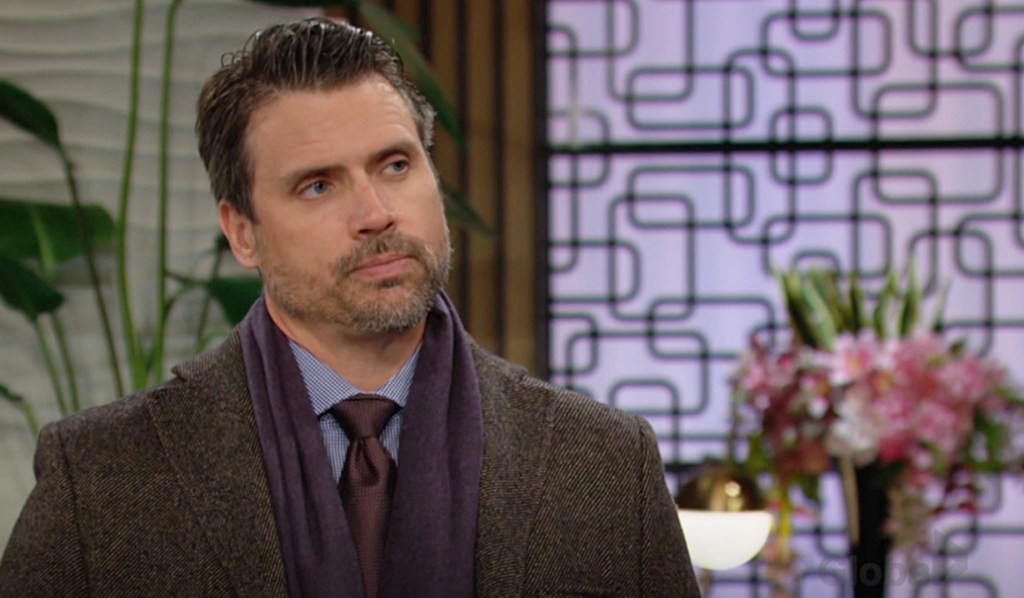 Adam returns to the penthouse, where the nurse tells him Chelsea’s asleep. Adam gets a text from Victor, who says he’s thinking of them and urges him not to hesitate to reach out.

In Amanda’s suite, Naya asks her, “Where do you want me to start?” Amanda replies, “At the beginning. I want to know everything.”

Next on The Young and the Restless: Amanda receives a history lesson.

See photos of Joshua Morrow as Nick Newman over the years in the gallery below. Get your free daily soap-opera fix for The Young and the Restless — and all of the other daytime dramas — delivered straight to your email inbox by signing up for Soaps.com’s newsletter.

Amanda Lashes Out at Naya and Is...