Friday, December 4, 2020: Today on The Young and the Restless, Christine and Lauren visit with Nina, Chloe regrets her actions, and the walls close in on Billy. 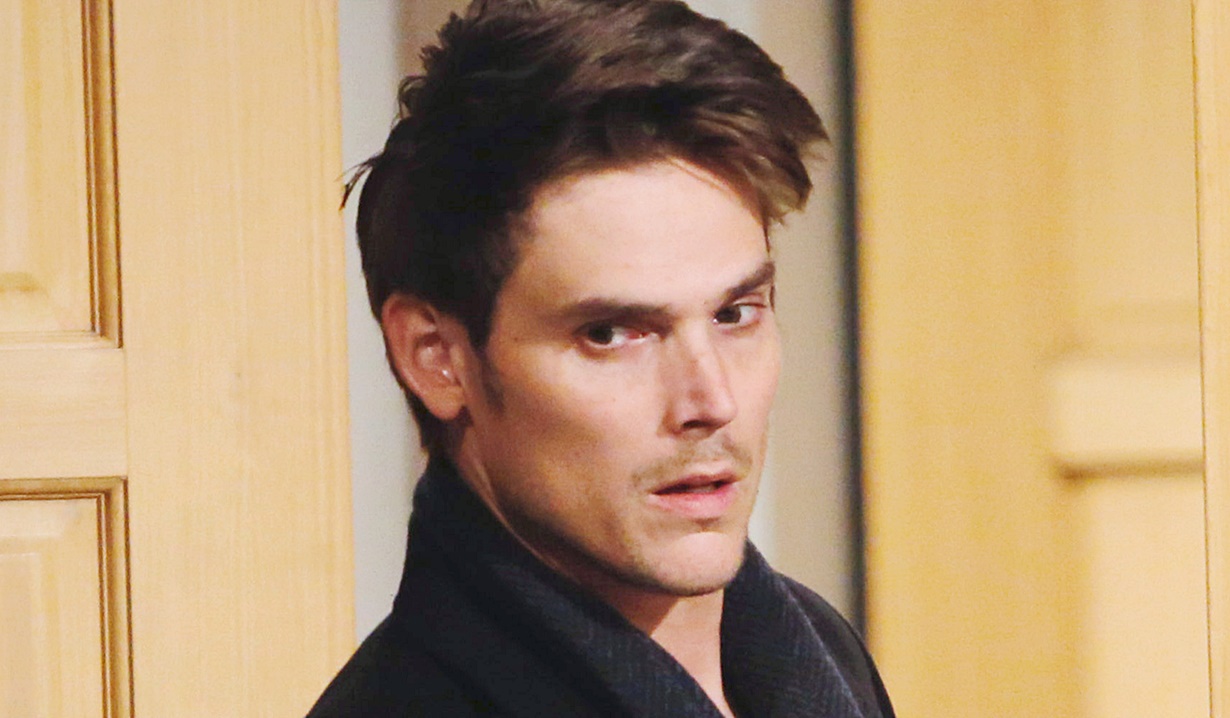 Victor pays Sharon a visit at Crimson Lights to tell her Adam’s been discharged — he obviously conned the doctors. He’s free and roaming around and the only two people in jeopardy are them. Sharon’s not afraid of Adam. Victor knows she’s the only professional he’s willing to listen to. “He’s free now. He needs you.” Sharon informs him the job is finished for her. Victor pushes; they want Adam to get back on his feet. Sharon had a confrontation with Chelsea and has had her life turned upside-down a couple of times. She thinks Chelsea should help him. Victor insists, “You need to deal with him.” 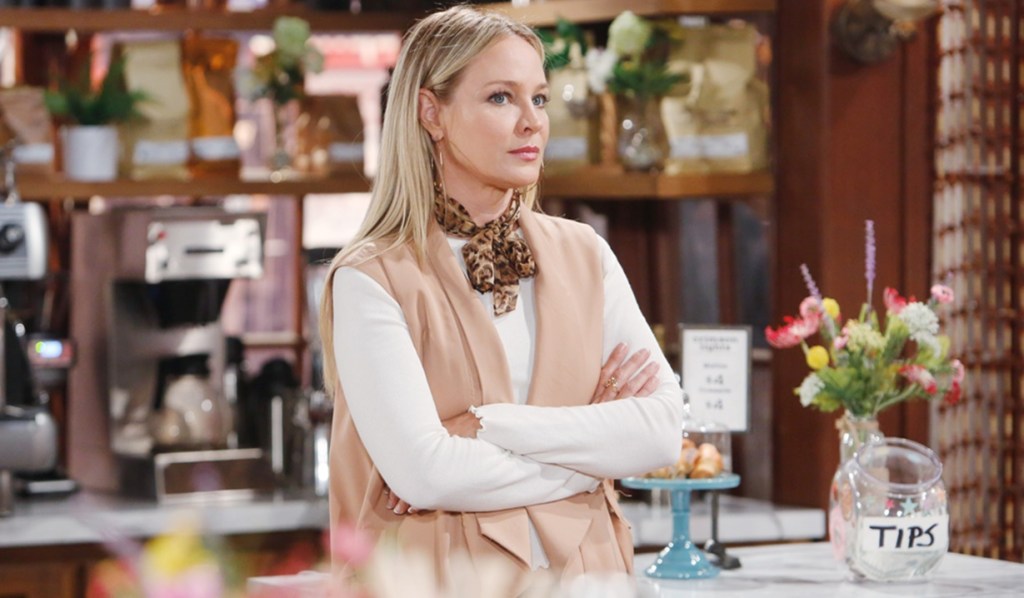 Adam arrives at home, followed immediately by Chelsea. He assures her he didn’t escape, he was released after 72 hours of hell. Adam wants to know what she’s decided about their future together. Chelsea still has too many questions about trust and has a constant headache amid all this insanity. Adam relays that thinking about her was the only thing that got him through the 72 hours. Chelsea suddenly decides she’s made up her mind. “I want you, Adam. I want our family back.” Adam’s relieved. They agree their future should start right now and head up to the bedroom. Later, Adam promises not to screw things up. Chelsea wants to leave Genoa City. Adam has to talk to Victor first… it’s about Connor. He won’t elaborate, but asks her to pack a bag so they can leave immediately afterward. Once alone, Chelsea grimaces and rubs her forehead. 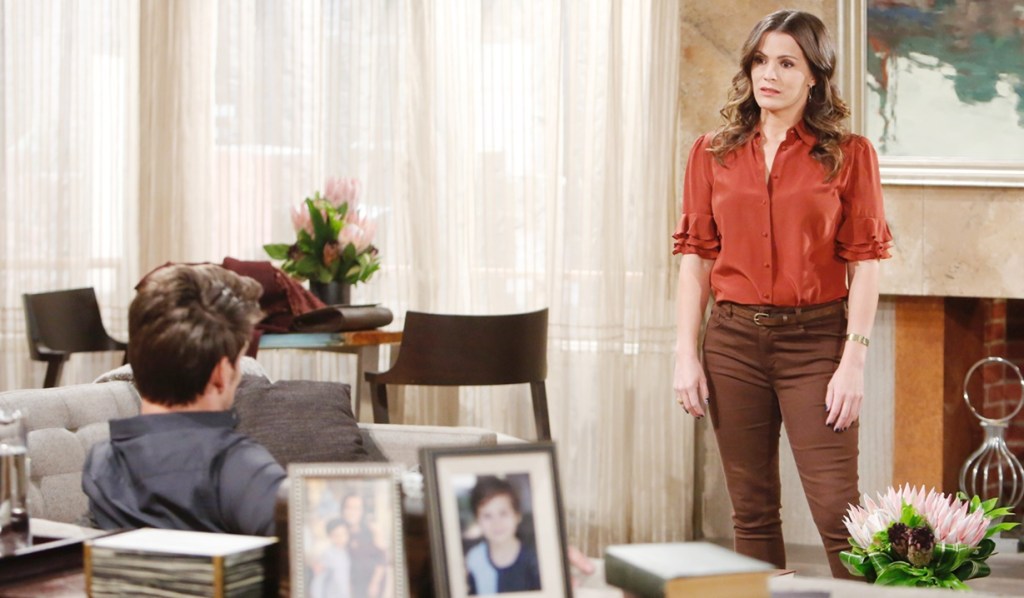 At the Chancellor mansion, Kevin’s perturbed by Chloe torturing herself over not hearing from Chelsea. She worries her ultimatum pushed Chelsea over the edge into Adam’s arms. Kevin points out she’s bouncing off the walls and counsels if she does take Adam back it will because their sick bond is too strong to break. Chloe pushed her best friend away and she felt betrayed; she’d do anything to take it back. When she carries her laundry upstairs she misses a call from Chelsea. When she the missed call later she returns it but gets voicemail. 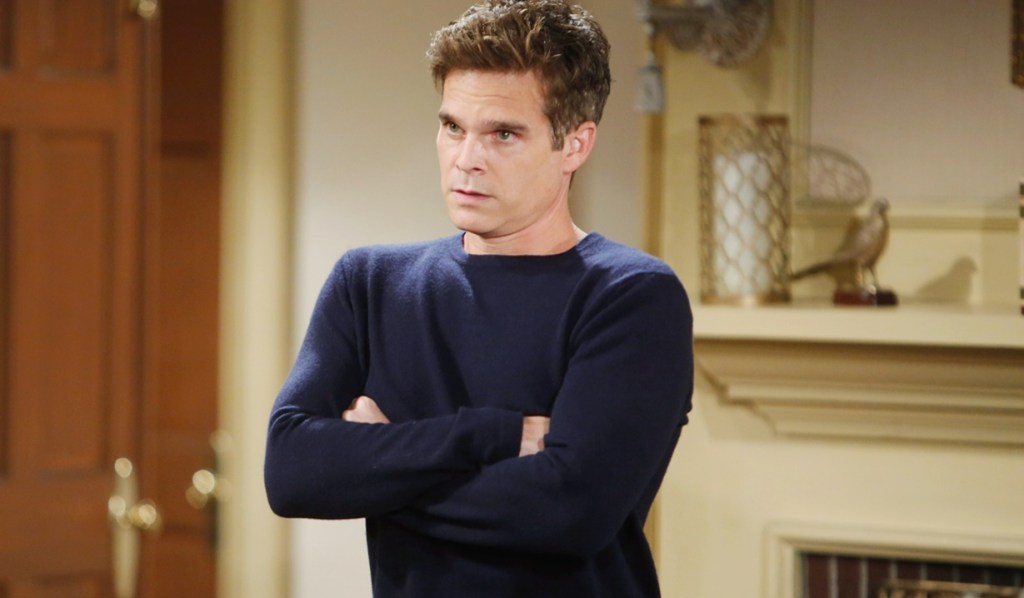 At the penthouse, Chelsea comes downstairs, gets dizzy and holds her head.

In Lily’s suite, Billy lays shirtless in a messy bed as Lily sashays out of the washroom in a sexy purple robe. He declares that last night was magical and he’d like some more. Lily removes her robe and tosses it at him.

In Grand Phoenix’s lobby, Nina explains to Christine that the wedding was a small affair. Christine was out of town any way and divulges that she’s leaning toward opening a private practice. Nina could use a good lawyer to negotiate her next deal. Chris urges her to move back to Genoa City. Nina’s tempted but feels it’s not the right time; she wants to give Chance space and needs to be in L.A. for work. Lauren joins them and chimes in that Nina should move back. They circle back to the wedding, and then Lauren says she’s sure Chance’s shooting must have brought back what happened to Ryan. Nina no longer takes precious moments for granted. They recall Nina and Phillip’s wedding and Danny Romalotti’s “Rock On” video. Nina agrees to dinner with Paul and Michael and promises to come back soon. She looks forward to whoever shot Chance going away for a long time. 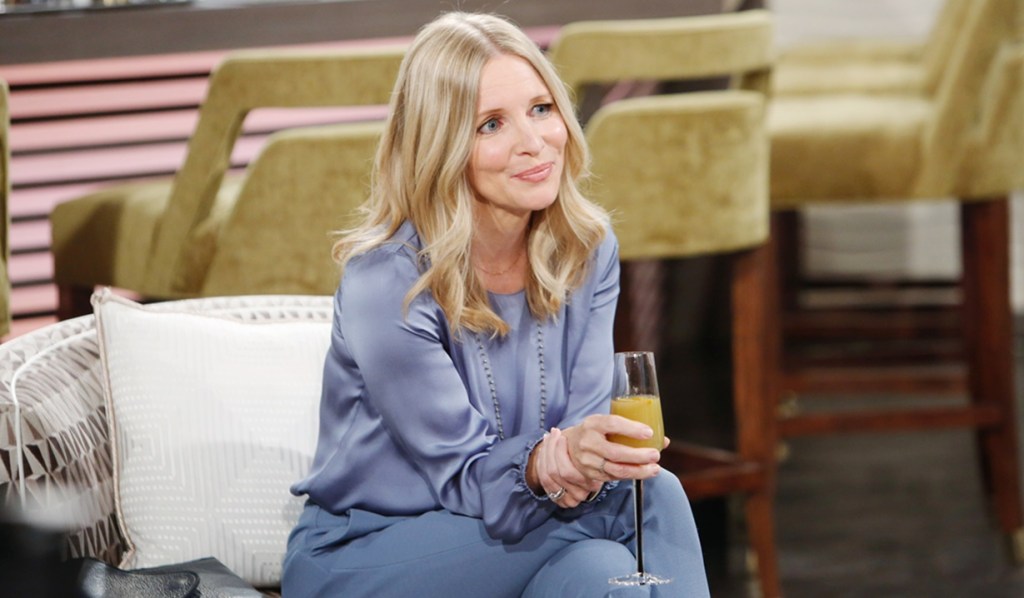 At Society, Billy teases Lily about her having to buy breakfast and thinks it’s a good thing he’s taking a break from Chance Comm; it wouldn’t be good to walk in with this huge smile on his face. Lily spots Rey at the bar and Billy challenges him. The real shooter’s still out there. If he’d like to apologize he and Lily will take two mimosas. They argue over whether or not Adam’s setting Billy up. Billy warns if he arrests him he’ll sue him down the road. Rey’s only going down the road leading to justice. After, Billy grumbles to Lily about being set up; it’s right in Adam’s wheelhouse — he’d take a bullet just to take him down. Lily’s unconvinced. Billy offers, “What about Victor?” Lily can’t believe he’d arrange for someone to take a shot at his own son. Billy suggest Nick, then jokes maybe he’s guilty. Lily laughs; then she just spent the night with a very dangerous man. Just then, they notice Rey and Michael watching them. Billy feels that can’t be good. Later, Michael and Lauren meet up and he notices she’s wearing the Teardrop of Love. She wants to get a head start on celebrating their anniversary. Michael calls, “Waiter! Check please.” 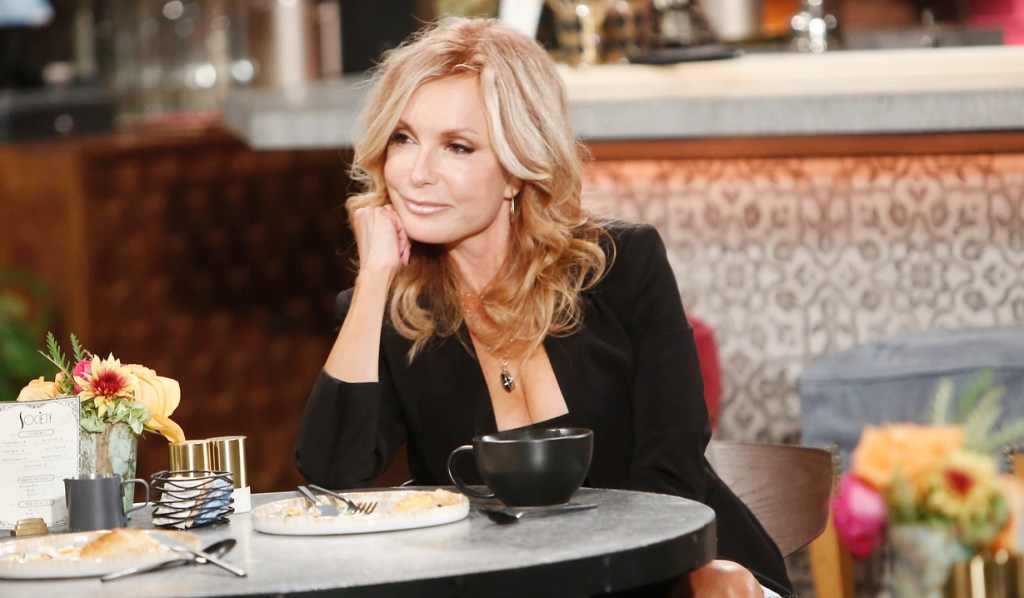 At Newman Enterprises, Victor and Victoria discuss Adam wanting to see them both. Victoria’s not surprised to hear Sharon’s done with it. Adam arrives and says he came to make a deal. He and Chelsea are leaving town to be with Connor. He wants to sign the paperwork Victoria had drawn up renouncing his claim to all things Newman on the condition that any inheritance he had coming will go to Connor. After Adam’s gone, Victoria’s exasperated with Victor’s ongoing concern about Adam and argues that Billy wasn’t the shooter — he thinks Adam’s trying to set him up but she’s not so sure. If she finds out Victor’s behind it she won’t easily forgive him. 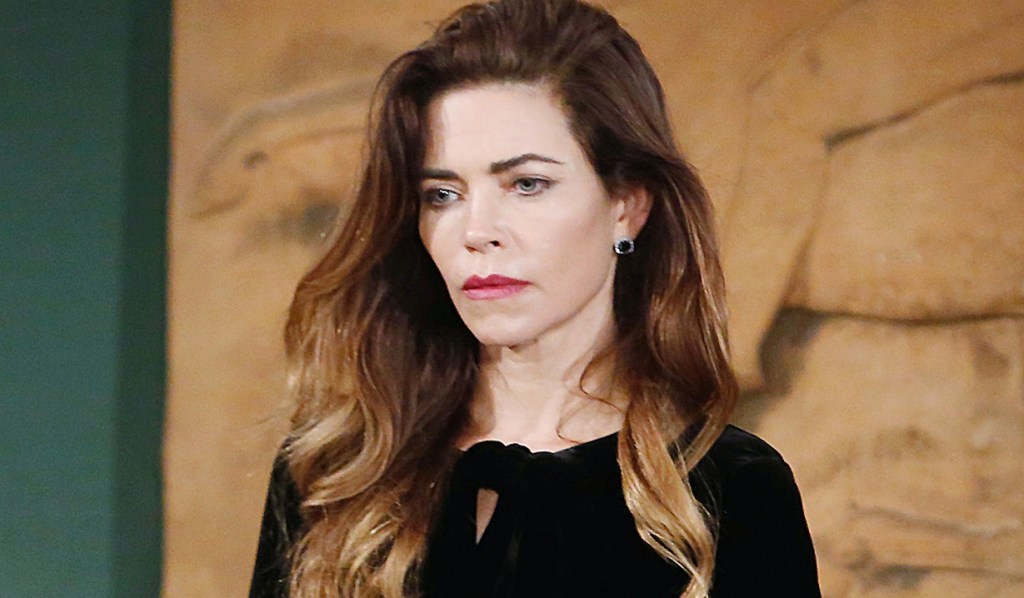 At Chance Comm, Billy’s distracted as Lily talks business. He’s worried Rey and Michael were talking about him, but he’s okay. They’re chatting when Rey appears and places Billy under arrest. Lily rushes out to get Amanda. 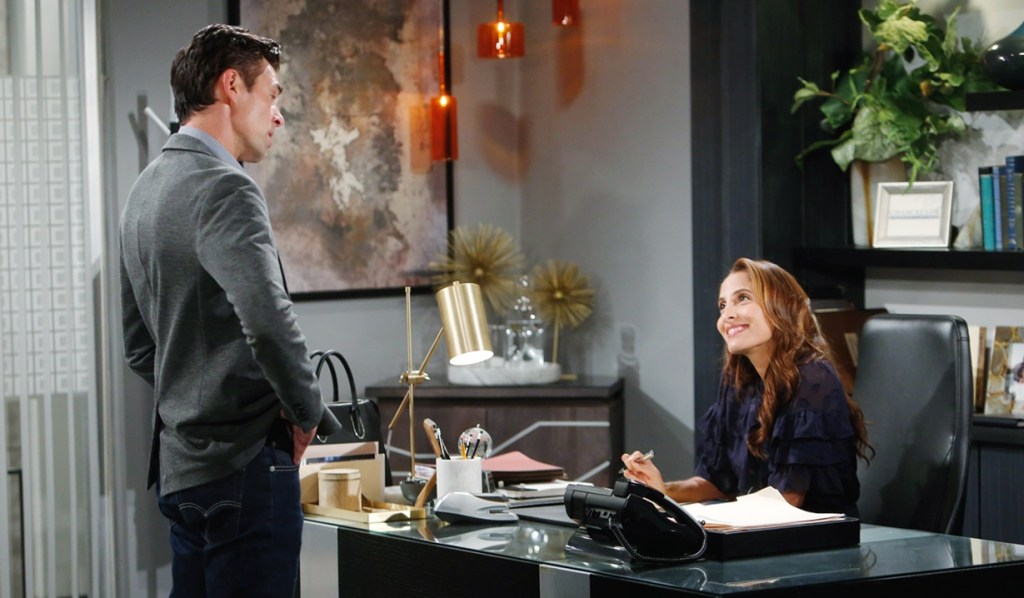 Adam returns to the penthouse and finds Chelsea passed out.

Next on The Young and the Restless: Lily questions Victoria’s motives.

Look back on Chelsea’s life since she came to Genoa City in the photo gallery below. Get your free daily soap-opera fix for The Young and the Restless — and all of the other daytime dramas — delivered straight to your email inbox by signing up for Soaps.com’s newsletter. 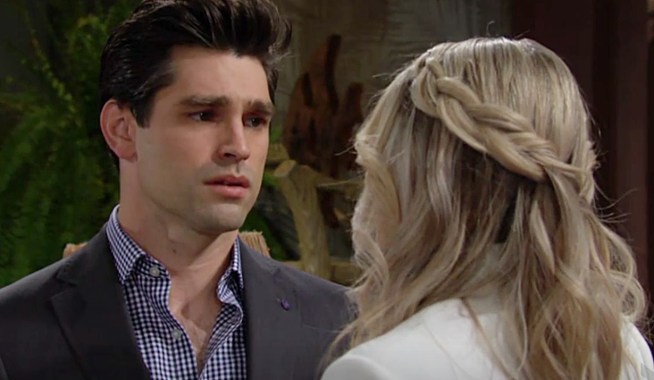 Chance's Honeymoon Surprise Turns Out To Be Abby's Worst Nightmare 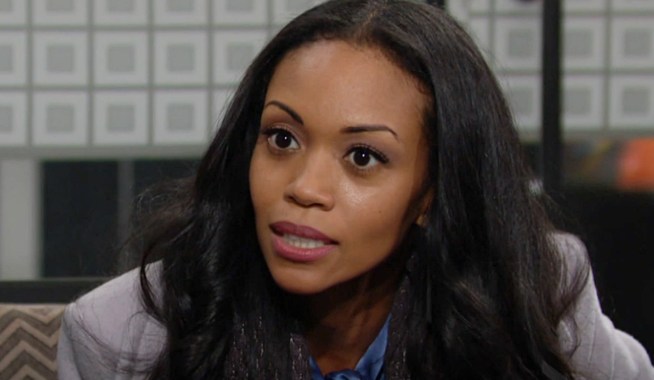