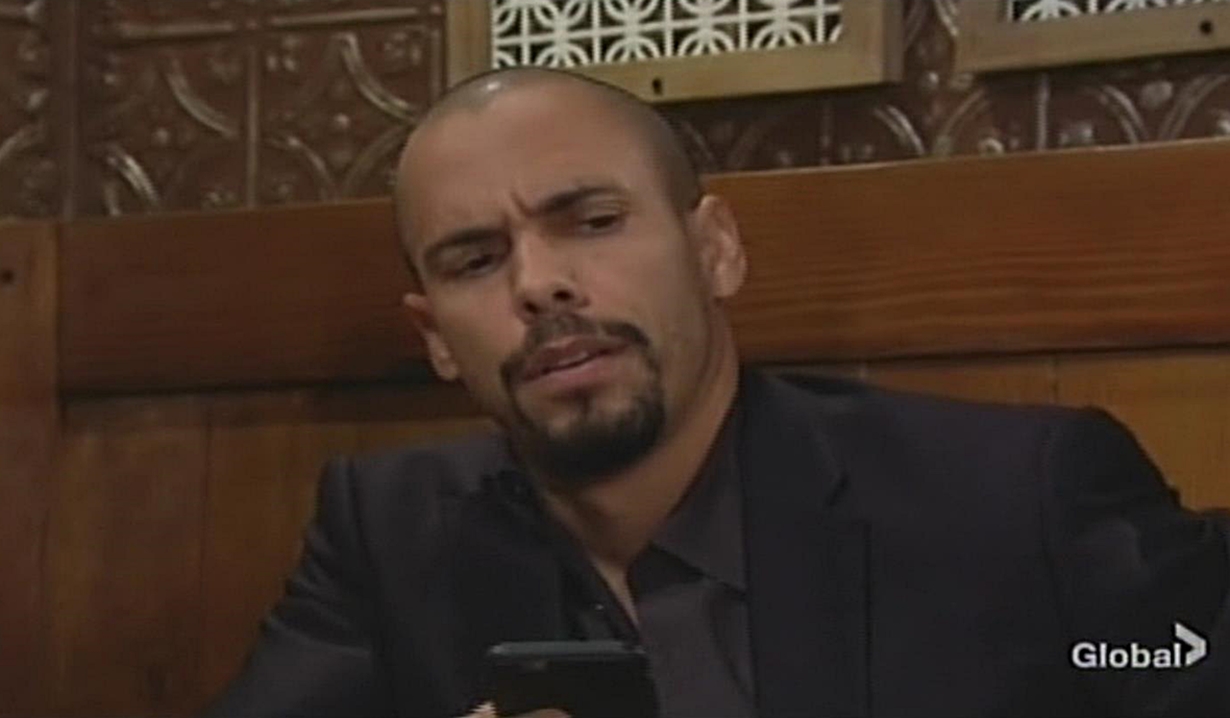 Billy arrives at the Chancellor Estate and Chloe says Jill’s not there. She’s going through Bella’s old clothes and muses she regrets not telling Billy he was carrying his child back in the day. She knows he’d do anything to take Victoria’s pain away. He pecks her cheek and says, “Thank you.”

At the hospital, Nikki tells Victoria, who is still in a coma, about her time with Sharon. She asks Victoria to open her eyes then steps out. Billy slips in – he couldn’t stay away and will never forgive himself for the pain he’s caused her. He needs her to be the strong one again to pull out of this. “I love you.” Victoria wakes up, then tells him to get away from her. Nikki reappears. She soothes Victoria and glares at Billy. 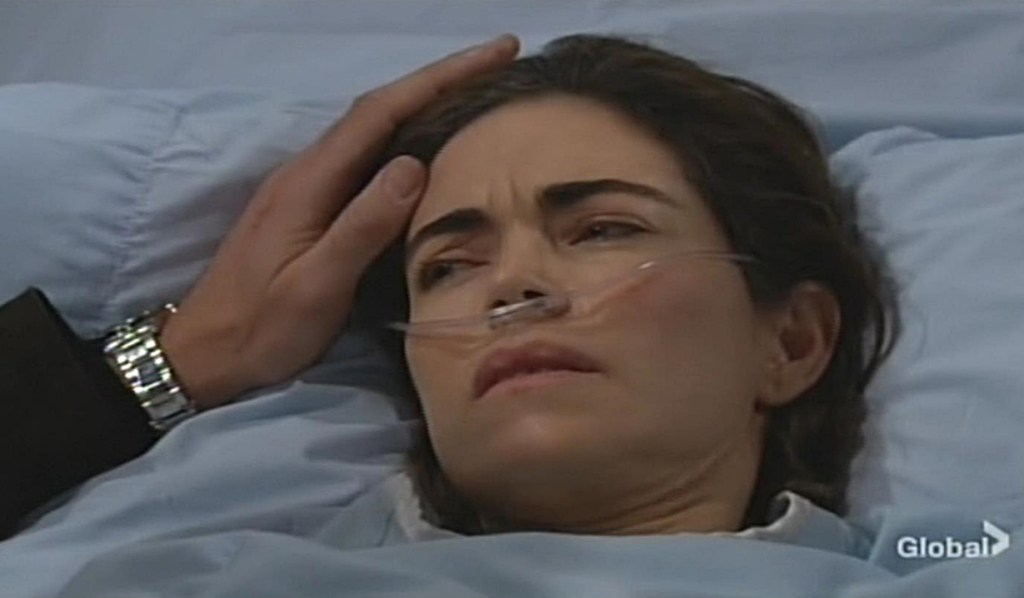 At Crimson Lights, Devon disconnects from Nick, then gets a text from an unknown number with a long code.

At Society, Nate and Elena discuss options for the clinic. She marvels that this is really happening and lets him know she appreciates his friendship. Nate returns the sentiment. Talk turns to Devon trying to track down Colin. Elena senses he feels guilty he’s let Katherine down.

At Grand Phoenix, Abby disconnects from her lawyer and complains to Chance she’s certain Phyllis is behind the lawsuit. She can’t believe Phyllis is doing this when her sister’s in the hospital. Chance reassures her, then gets a call from Devon about his cryptic text, which he suspects is from Colin. Chance agrees to meet him. After, Chance compliments Abby and tells her he wants to spend as much time with her as possible. Abby agrees it feels right. They kiss. Later, Abby learns another lawsuit has been filed and fumes about Phyllis. She rants at her lawyer to try harder on the phone, disconnects, and decides the hotel is cursed. 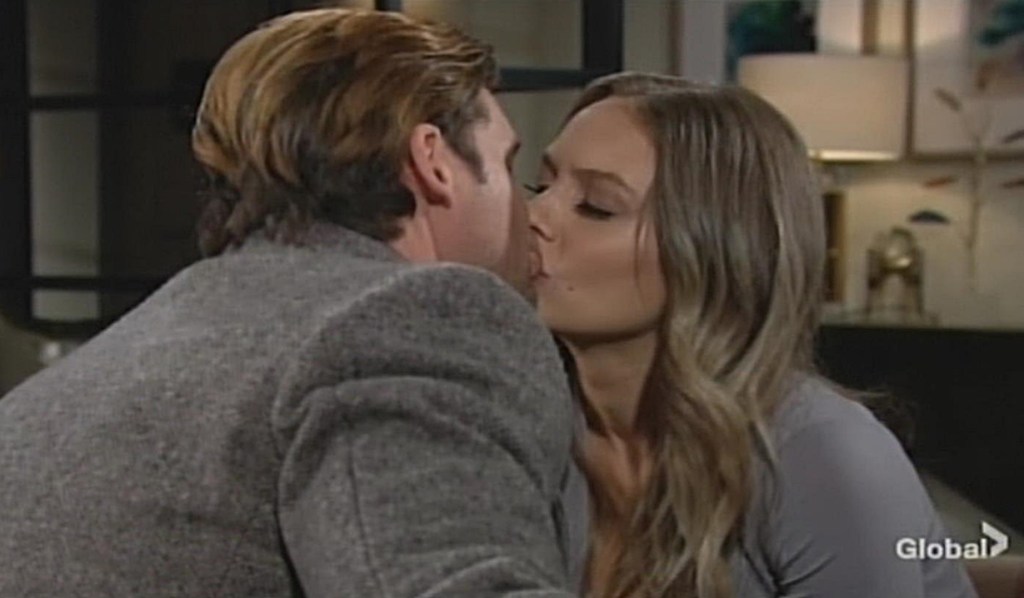 Chance arrives at the coffee house, where Kevin is working on his laptop, and joins Devon. They try to figure out the text. Chance approaches Kevin, who bristles due to his past with Chloe. Chance explains that was a long time ago. Devon joins them with the text and Kevin thinks he knows what it is. He types away and announces it’s an offshore bank account. Kevin exclaims at the balance…$2.475 billion! The account is in Devon’s name. Devon gets another text from Colin that makes it appear he’s giving the money back, which is puzzling. Kevin asks, “Who cares?”

More: Vote on what Y&R’s Tessa will discover

Chance, Devon and Kevin arrive at the Chancellor Estate. Jill’s had a text from Colin saying traveling the world without her isn’t the same and asking her to get her grandson to back off. They explain he gave the money back. Jill won’t forgive him. Kevin warns Devon to transfer the money right away and hints he’s available for more work. Devon assures him he’ll be well-compensated. Chance is stunned that Devon wants to let Colin go. Devon feels he’s broke and alone, and has suffered enough. Later, Kevin’s puzzled that Devon didn’t seem happier. He and Chloe go upstairs. Jill thinks Chloe found the perfect person for her – what’s she doing wrong? Chance never understood what she saw in Colin. Jill never felt more alive than when she was with him. Chance thinks he was lucky to have a part in her life. Once alone, Jill takes delivery of a single red rose.

Devon joins Elena and Nate at Society and announces Colin gave all his money back. They’re thrilled. Nate leaves and Elena asks Devon, “What’s really going on?” Devon says Colin’s text, “Money can make a person crazy,” struck a chord with him. Devon wants to be more efficient with how and who he helps.

More: Y&R star’s A Killer in My Home airdate

Nate arrives in Victoria’s hospital room to examine her. Outside, Nikki reminds Billy he was told he’s not welcome there. Billy argues he has a right to be there. He worries Vikki thinks he did this to her. Nikki doesn’t want him anywhere near her daughter and advises he needs therapy or a meeting – he’s in denial. Nate appears – Victoria’s asking for Nikki. Billy watches them. Victoria asks what happened. Nikki tells her Billy won’t be back and to focus on getting better.

Nikki Is Supportive of Sharon After...

Abby Hands Her Hotel Shares Over to...