Thursday February 20, 2020: On Young and the Restless today, Sharon has news for Nikki, Phyllis kisses someone, and Adam pops the question. 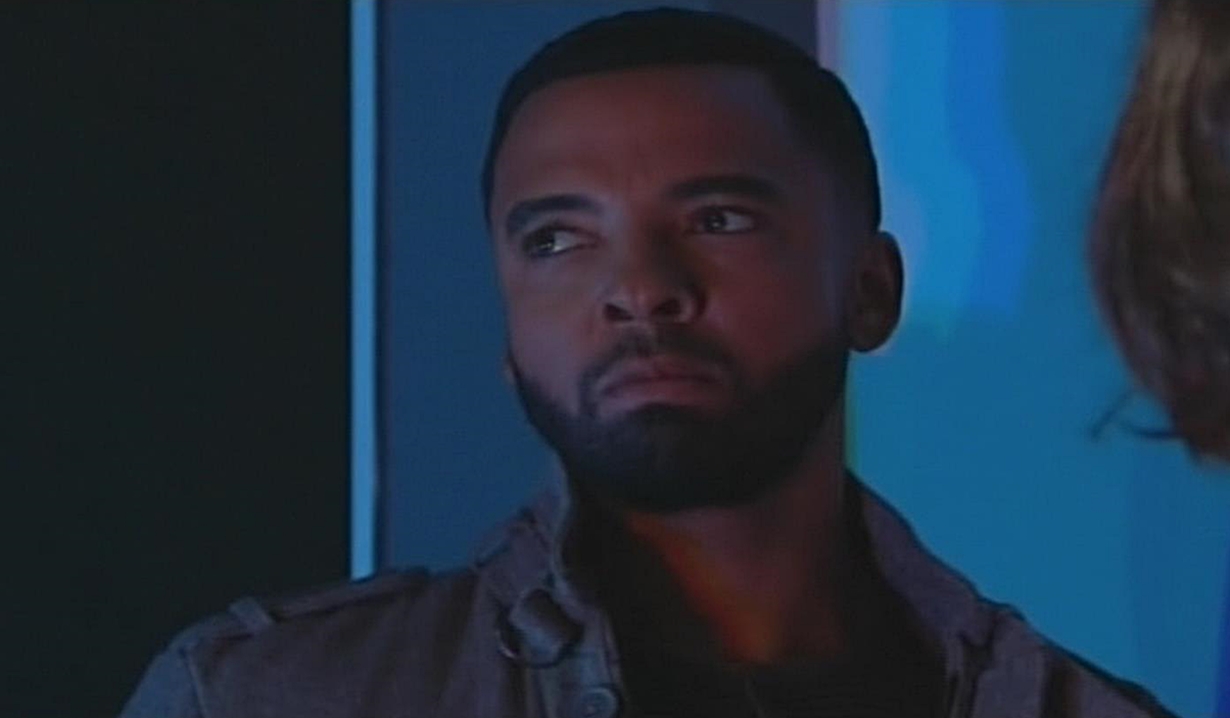 In the gala’s photo gallery room, Chance has something bad to tell Abby involving Adam and Phyllis. Abby quips, “That’s never a good combination.” In the dining area, Victoria and Nick present Victor with his gift. He marvels at the model of the car he drove through the Midwest. Nearby, Chelsea spots Adam watching the exchange. Across the room, Noah learns Summer and Kyle are back together and is supportive of his sister’s happiness. Sharon, Rey, Jack and Phyllis watch. Jack and Rey aren’t happy about the pairing. Sharon knows Lola got hurt but feels they should let Summer and Kyle be happy. Jack’s puzzled when Phyllis agrees wholeheartedly – some people never find their true love and it can all be gone in a heartbeat. 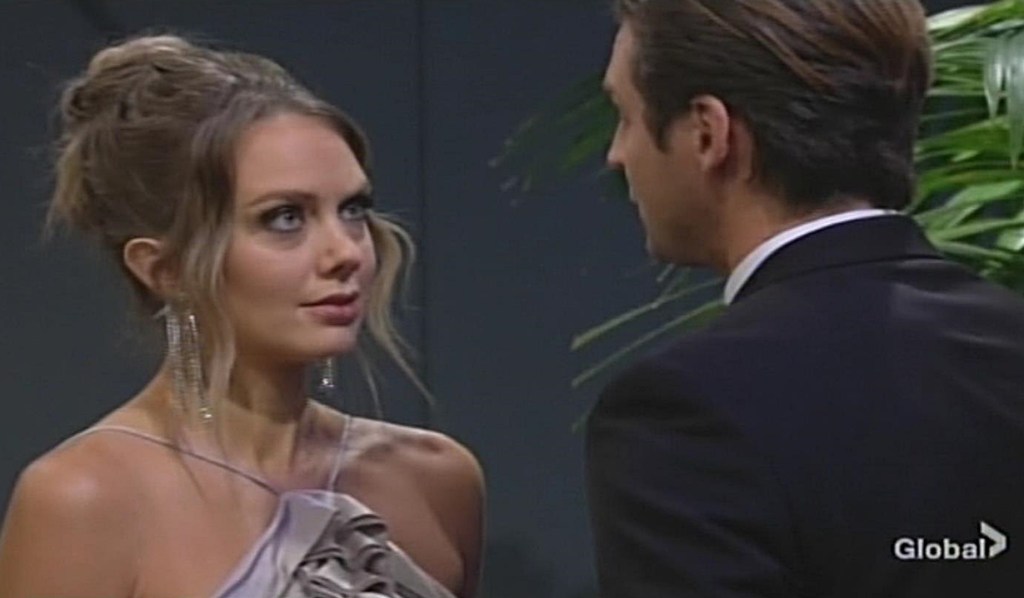 At the Grand Phoenix, Amanda, wearing a white dress, chats with Billy about the Newman gala. Billy remarks on the hypocrisy of it all. They’re celebrating Victor, who has lived on his own terms and that’s all he’s trying to do. Amanda asks how he’s feeling since the accident then excuses herself. Billy senses she’s steering clear of him and shrugs that maybe everyone’s right that he’s a ticking time bomb. 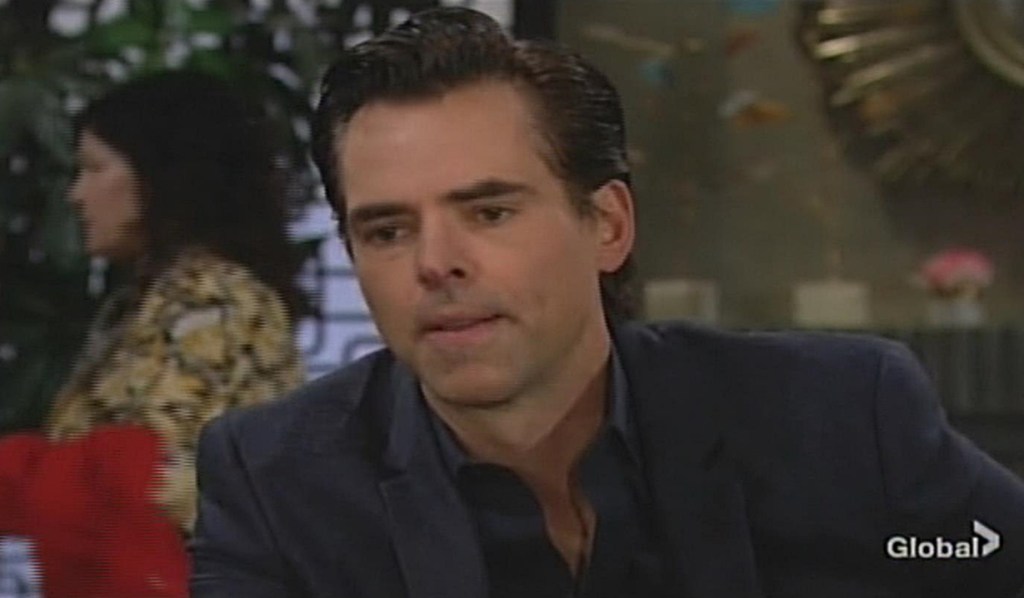 At the gala, Jill and Jack marvel at climbing into their glad rags to give the devil his due. Talk turns to Billy. Jill thinks he needs a purpose to get him off the treadmill of self-destruction. In the gallery, Chris tells Paul she’s mostly forgiven Victor; she loves her life now. Not far away, Abby learns Adam saved Chance’s life and the man responsible went off the radar – that’s the information Phyllis used to get Chelsea’s shares. Abby stalks away to confront her. By the bar, Sharon tells Nikki she has breast cancer. Nikki recalls when Casey fought cancer. Sharon asks Nikki to be there for Nicholas and the kids. Nikki feels if she can get past their battles, she can beat this too. 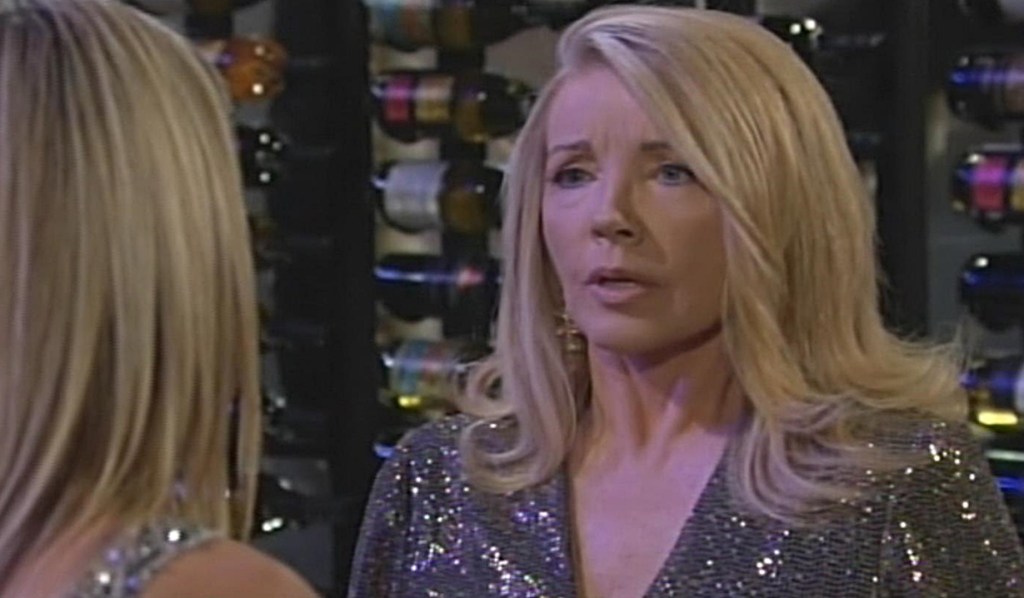 At the hotel, Billy has changed into a tux – he’s going to pay tribute to ‘the man himself’. Amanda warns it’s a bad idea. As she follows Billy, someone watches her.

At Victor’s gala table he tells Noah how much the gallery means and remarks on his talent. Across the room, Abby, Chelsea and Phyllis have it out about Phyllis’ plan to strongarm her way into the hotel. Nearby, Chance warns Adam that Phyllis can use the tape against them as long as she wants. Adam admits she won this round, but eventually they’ll turn things around. He irks Chance by suggesting Abby let go of the Grand Albatross. Meanwhile, Nick needles Phyllis about her talent for ticking people off. By the bar, Sharon updates Rey on her conversation with Nikki. Noah appears to take Sharon home.

In the photo gallery, Victoria chats with Chris and Paul before returning to the dining room. She warns Jill she doesn’t want to discuss Billy, but Jill insists he’s a good man. Victoria states he wants more out of life than she has to offer. In the gallery, Phyllis remarks on Nick’s relationship with his father. Nick’s amazed at her ability to see into his soul. Phyllis says he sees her; he knows who she is. Nick thinks she does crazy stuff to protect her heart. They share a kiss. 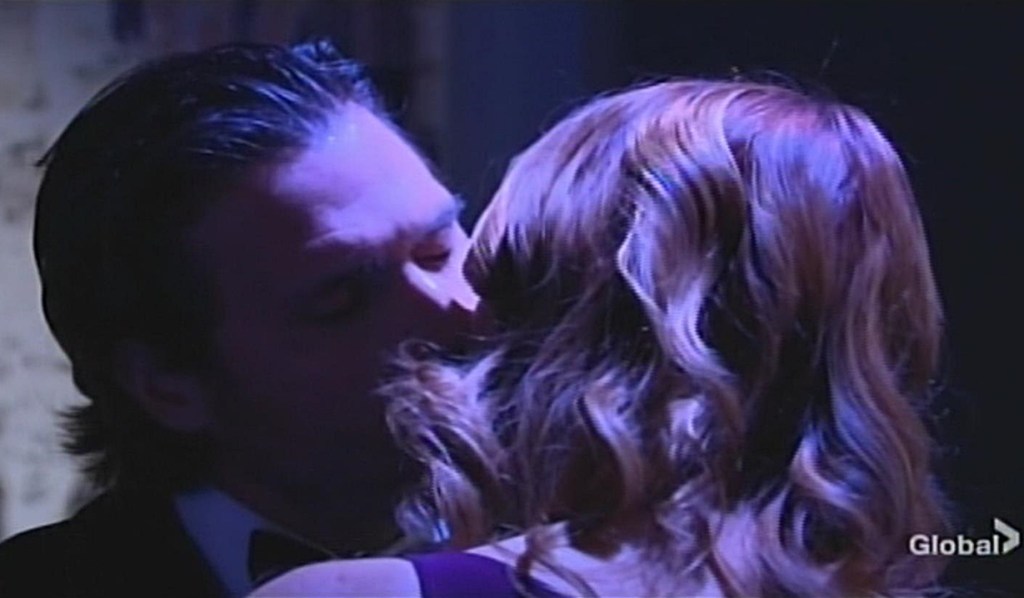 Billy arrives at the gala and asks Michael and Lauren if they’ve seen Victoria. They point to the art installation. Elsewhere, Elena and Devon wonder why Amanda just walked in. Someone watches her as she looks for Billy. At a table, Abby tells Chance she wants to crush Phyllis. Elsewhere, Chelsea informs Adam that Phyllis actually did her a favor – she’ll go back to designing in time. They agree everything feels so right. Adam drops to one knee and proposes. Chelsea takes it in – the moment they realized they could have it all back. “Yes, Adam Newman I will marry you.” Across the room, Phyllis and Victor agree neither of them ruined the night for the other. Phyllis leaves and Nikki and Victor discuss Sharon’s cancer and all they take for granted. 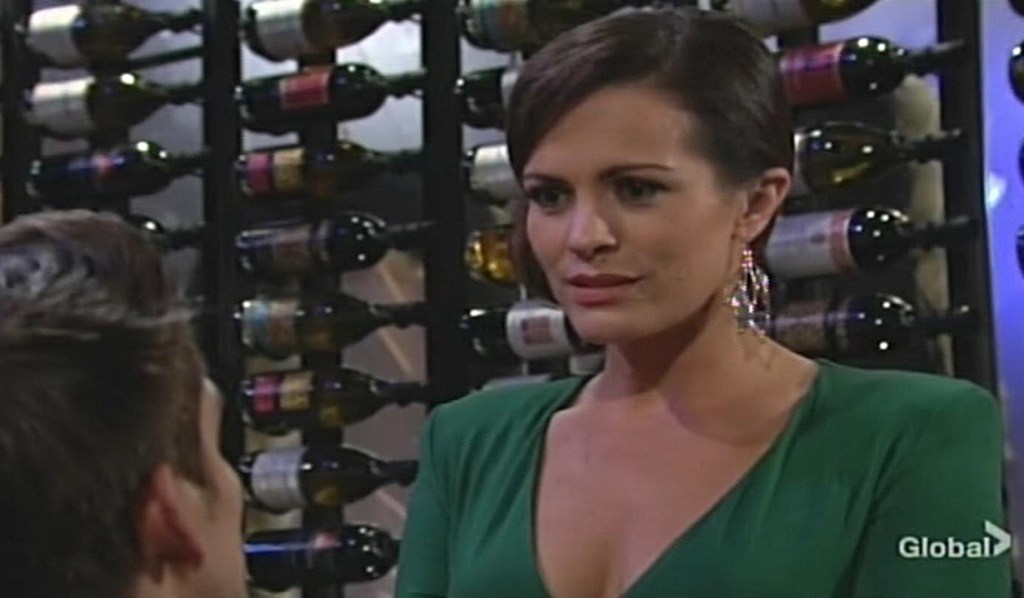 Billy wanders the gallery and scoffs at the ‘shrine’. Amanda appears and tries to convince him to leave – he’s drunk. In the shadows, Ripley fumes as Amanda takes Billy’s face in her hands to calm him. He turns his back and Amanda exits, only to be replaced by Victoria, who is also in a white dress. The lights dim and Ripley walks over and stabs Victoria in the side. Billy sees the blood as she falls into his arms.

The Newman gala descends into chaos.

<p>Nikki, Nick and Victoria Newman host the gala in honor of Victor Newman and the 50th anniversary of his company. The gala is attended by a ‘who’s who’ of Genoa City society as well as Victor’s friends and family members.</p>

<p>Several speakers paid tribute to Victor Newman at the gala, including Jill, who toasted her old friend. During her toast there was a flashback to a scene of a younger Jill and Victor flirting. Michael Baldwin, Victor’s former lawyer applauded and interjected, “Never a dull moment!”</p>

<p>After his siblings spoke about their father, Adam wanted to say a few words about Victor as well. He recalled their difficult times but hoped they had reached a turning point. Victor hoped so too.</p>

<p>Victor credits Nikki for being his rock and thanks her for putting the stunning gala tribute together. They share a kiss to much applause from the guests.</p>

<p>Nick caught a moment with Chelsea at the gala. They discussed her having moved on with his brother Adam, and their best wishes for one another’s happiness.</p>

<p>Newly reunited after his split from wife, Lola Rosales, Kyle and Summer decided to attend the Newman gala together. Several people remarked on them being together. Some were upset by it, while others wished them well.</p>

<p>During a moment catching up with Phyllis at the gala, Jack is surprised to hear her agreeing with Sharon’s sentiments about Summer and Kyle. It wasn’t something he ever expected to hear.</p>

<p>During the gala, Phyllis caught up with her old friends, Michael and Lauren. It was obvious that Phyllis was stirring the pot as Abby confronted her publicly about her scheme to take back the Grand Phoenix.</p>

<p>Gala guests gather to take in the stunning art installation featuring photos of Victor Newman set in light and shadows. Nikki reveals that Noah, who has made a name for himself as a photographer in London, is responsible for the incredible surprise.</p>

<p>At the gala, Elena and Devon were surprised to see Amanda Sinclair arrive. They wondered why she was attending the Newman event. Devon and Victor shared a warm moment together as both missed Neil Winters that night.</p>

<p>Amanda tried unsuccessfully to dissuade Billy from attending the Newman gala while still at the hotel. When she followed him to the event, she was watched by someone. When she caught up to Billy, Ripley saw them together and later mistook Victoria for Amanda and stabbed her.</p>

Paul and Rey Go on the Hunt for...