Phyllis Blackmails Chelsea for Her Hotel Shares, and Warns Chance She Wants the Whole Thing

Tuesday February 18, 2020: On Young and the Restless today, Nick learns his father's aware of Sharon's cancer, Sharon has a run-in with Nikki, and special guests arrive as the Newman Enterprises gala gets underway. 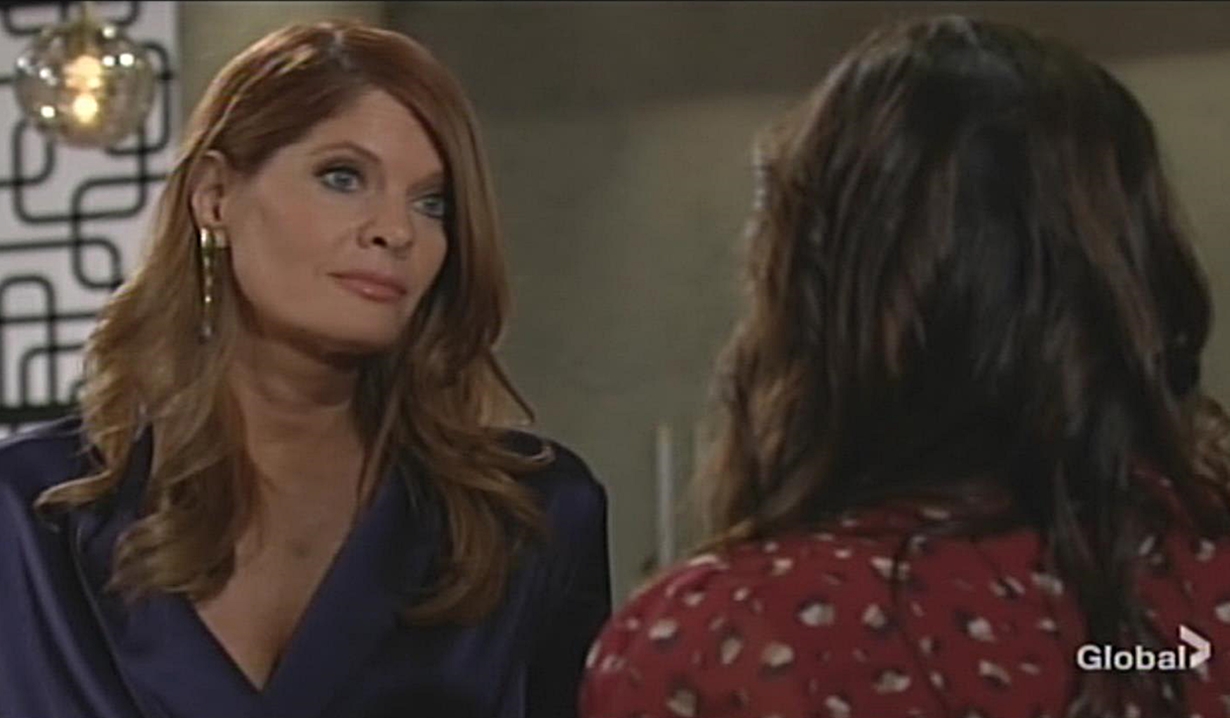 In Abby’s suite, Chance presents her with a Grand Phoenix plaque he had made for her. They kiss. Downstairs in the lobby, Chelsea warns Phyllis about threatening Adam and maintains no one is going to jail. Phyllis whispers, “Tell that to the woman in Vegas whose husband is missing.” Chelsea barks, “Get to the point.” Phyllis tells Chelsea what she knows and explains she wants her 25% of the Grand Phoenix. Upstairs, Adam’s been trying to call Chelsea. She answers and he tells her he got a suite. She heads up. Meanwhile, Abby joins Phyllis, and refuses to discuss the hotel’s interior design with her. Phyllis smirks, “Okay. You are the boss.” In Adam’s suite, Chelsea reminds him he said he’d tell her what happened in Vegas when she needed to know – that time is now. She learns what Phyllis said is true. Chelsea wants to be angry, but he didn’t do that to her when Simon Black came to town. Adam says he can deal with Phyllis, but Chelsea can handle her. Downstairs, Chance interrupts Abby and Phyllis’ bickering as Abby gets a text from Chelsea and excuses herself. In Adam’s suite, Chelsea informs Abby she’s selling her shares…to Phyllis. Abby’s floored. She guesses Phyllis is blackmailing her and wonders if it concerns Adam. Chelsea won’t talk but urges Abby to take Phyllis down if she gets the chance. After Abby leaves, Chelsea tells Adam she will choose him every time. In the lobby, Abby downs Phyllis’ drink. Chance is stunned to hear Chelsea’s selling Phyllis her shares. Abby seethes, “What do you have on her Phyllis?” Abby stalks off and Chance asks Phyllis what she did. Phyllis replies it’s not what she did – it’s what he and ‘Spider’ did. Chance marvels that she’s ruthless and asks what else she wants. Phyllis doesn’t want half the hotel; she wants the whole damn thing. 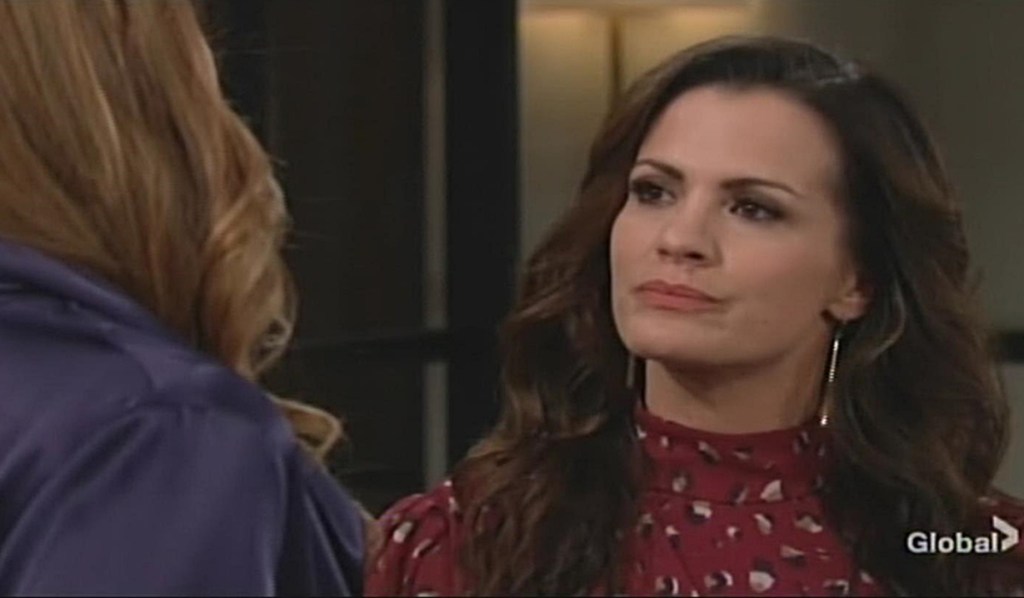 At the ranch, Nick asks Victor if Nikki’s back. He explains her plane just landed and Victoria’s picking her up. Victor stuns Nick when he questions how Sharon’s treatment is progressing. Nick tries to be cagey, but Victor knows she has breast cancer. Nick warns she doesn’t want anyone to know. Victor’s concerned about Nick and Faith. Nick confirms she knows and has difficult days. Victor tells him to come to him if he needs help. Nikki and Victoria arrive; they’re on top of the gala. Victor wants a hint as to his surprise. Victoria teases Mom has gone all out. 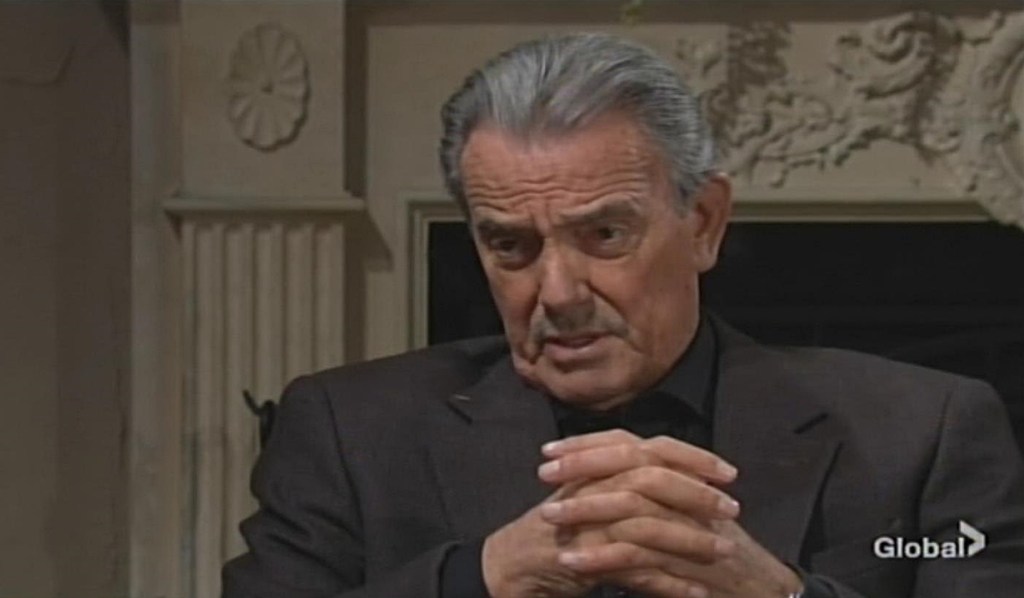 At Sharon’s place, Rey gives her Traci Abbott’s latest novel to take to chemo. He jokes he’ll read it out loud doing all the characters and voices. They hug, then leave. When they return later, Sharon feels fine and complains chemo is boring. She wants to attend the Newman gala. 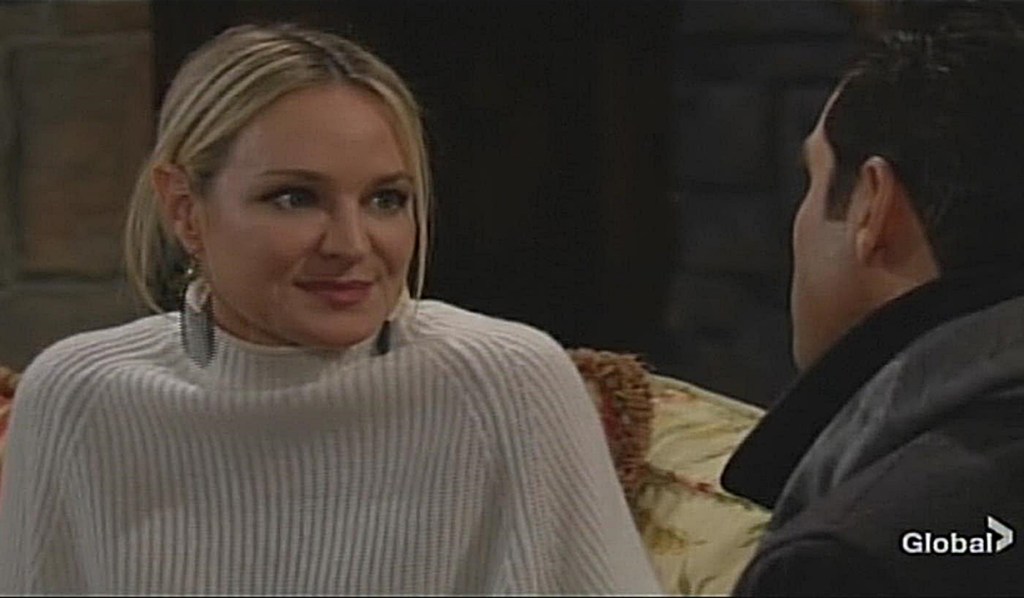 Victor arrives at Top of the Tower, takes in the elegant empty tables and the Newman Enterprises sign. Nikki joins him. He tells her she’s his rock, without her he may not be here. Later, the guests drift in. Nick checks in with Chelsea, who he wants to be happy, while Adam goes to ‘kiss the ring’. Sharon and Rey arrive and set ‘Phyllis’ as her code word for wanting to leave. Nikki follows Sharon into the powder room where she fights a wave of nausea. Nikki thinks there’s something wrong and worries she’s pregnant. Sharon laughs out loud. She tells her she ate a shrimp appetizer and accuses her of skimping on the catering. Meanwhile, Chelsea and Abby are both irked with Phyllis shows up. Abby confronts her and she smirks – now that they’re full partners she figured they’re like family. Elsewhere, Sharon rejoins Rey and Nick and updates them Nikki thought she was pregnant. Their eyes pop out. Just then, Noah arrives – he’s part of Grandma’s big surprise. He’s really there for his mom though. Sharon hugs him. Across the room, Victor’s chuffed to see his brother, Matt, (played by Robert Parucha) and his first wife, Julia, (played by Meg Bennett), arrive. He calls for everyone’s attention and welcomes them all to the 50th anniversary celebration for Newman Enterprises. Nikki grabs the mic and adds, “And the man behind it.” Victor booms, “Let the festivities begin!” 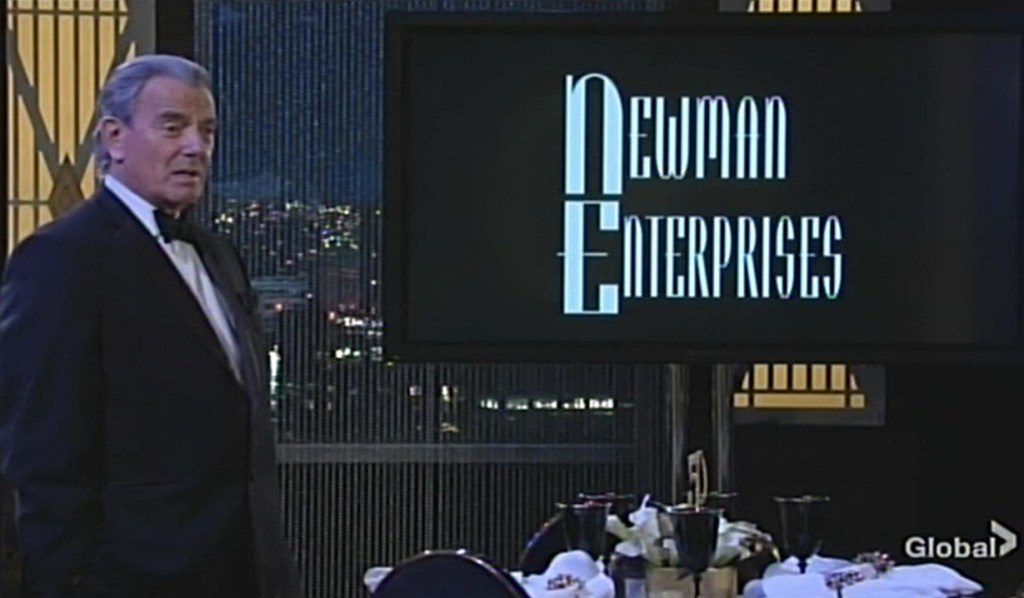 Victor takes a look back over time at the Newman Enterprises gala.

<p>Abby’s lavendar gown for the gala featured a peek-a-boo black bustier. Abby is wearing an up-do and drop earrings to compliment the look.</p>

<p>Adam wears a black suit to the event to honor his father. A black silk tie adds to the overall effect which is sharp and understatedly dramatic.</p> <p> </p>

<p>Chelsea is wearing an emerald green gown to the gala for Victor. She has a sideswept hairstyle worn in a low coil with drop earrings to complete the look.</p>

<p>Christine wore a black gown with a shimmer effect and layered ruffle feature. Her hair remains loose with a flip on one side.</p>

<p>Elena rocks a gown in midnight blue for the Newman Enterprises gala, which is also an opportunity for her to meet potential clinic supporters. She wears her curly hair pinned up on one side to show off her cute earrings.</p>

<p>Jill is wearing a beautiful natural color with just a hint of shimmer in the fabric of her gown. She completes the look with complimentary accessories, drop earrings and hair pulled back to the nape of the neck.</p>

<p>Lauren always stands out and her gown for the gala is a gorgeous wine color in a dazzling fabric. She wears her hair down in loose waves to complete the look.</p>

<p>Michael’s suit for the gala matches the gorgeous wine hue of his wife, Lauren’s gown. He sports a jaunty bowtie as a nod to his personality and to complete the look.</p>

<p>Victor Newman’s grandson, Noah, sports a classic black and white tuxedo. He updates the look with scalloped-edged pocket square and a silk bowtie.</p>

<p>Rey turns out for the gala in a midnight blue tuxedo. In a nod to trends, Rey finishes the suit with a bowtie in the matching hue.</p>

<p>Sharon dons a glitzy silver gown in a classic cut for the Newman gala. The look is completed with statement earrings and a simple smooth hairstyle.</p>

<p>Summer is wearing a halter-style emerald green gown for her grandfather’s big event. She has pinned some hair back at the crown but left the rest hanging in loose waves to complete the look.</p>

<p>At the Newman Enterprises gala, Victor pauses for a snapshot with Victoria and Nicholas. The pair present their father with a special gift during the event.</p>

<p>Victor’s brother, Matt Miller, returned to Genoa City for the gala event honoring his brother, who was born Christian Miller. The pair paused for a photo together during the party.</p>

<p>Victor takes time out from his party to speak with his first wife, Julia, who was back in town for the tribute to her ex. Julia wore a crushed velvet gown in a wine colour and opted for a simple hairstyle.</p>

<p>Noah, back from overseas to take part in Newman Enterprises 50th anniversary celebration, spends time with his parents. It’s the first time Noah has returned to Genoa City since Sharon was diagnosed with cancer.</p>

<p>Victor’s brother, Matt Miller, shares some history with Ashley Abbott from the time he spent in Genoa City decades ago. The pair took and opportunity to catch up at the gala and paused to have their picture taken.</p>

<p>Michael and Lauren shared a table with friends Paul and Christine Williams at the gala. They were joined by Victor’s brother, Matt Miller and Victor’s first wife, Julia Newman.</p>

<p>Phyllis, Elena, Devon, Rey, Sharon, and Noah sit together for a photo at the Newman gala. Phyllis crashed the party much to Abby and Chelsea’s chagrin.</p>