Friday February 14, 2020: On Young and the Restless today, Jack counsels Kyle and Summer, Adam and Chance meet with Riza, and Sharon fights her first wave of sickness. 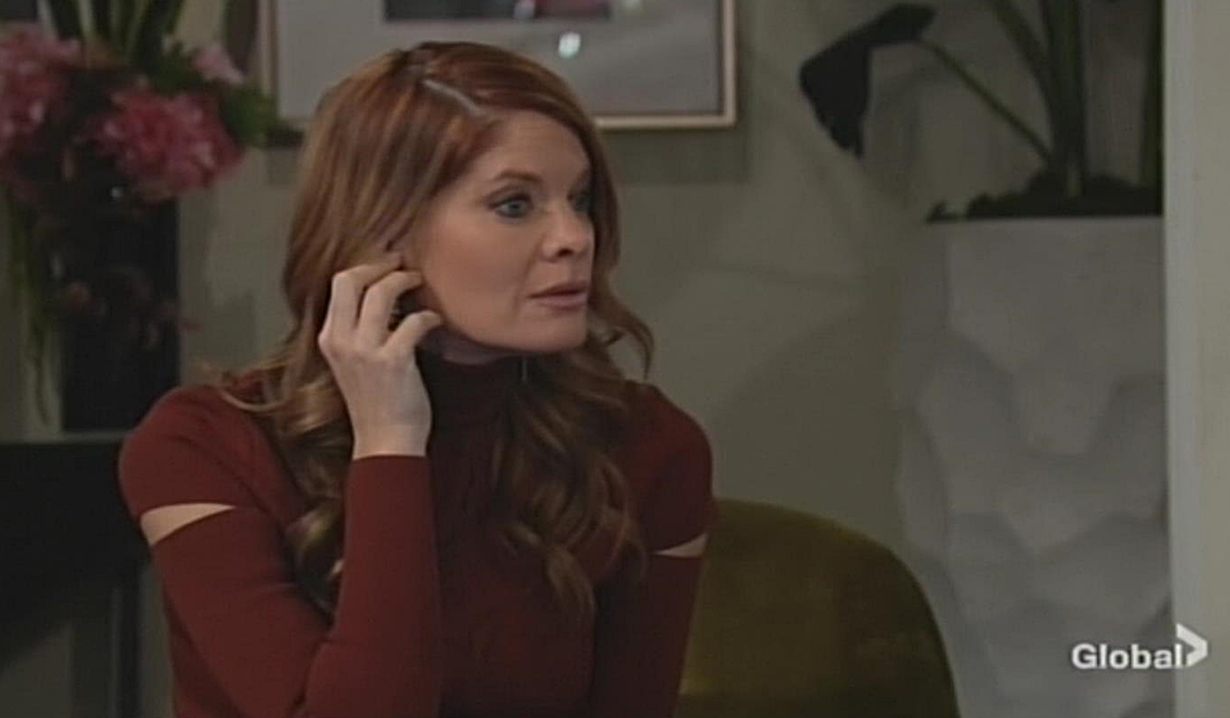 At Nick’s place, he’s surprised Phyllis responded to his text in person. Phyllis claims she heeded his advice about Vegas. He’s skeptical. They discuss Summer, then talk turns to Faith. Nick confides she’s terrified about losing her mother. Phyllis feels Faith is freaking out because the world’s a scary unpredictable place – Nick’s a rock star dad and can bring her back to earth. Nick thanks her and they laugh about being mature. 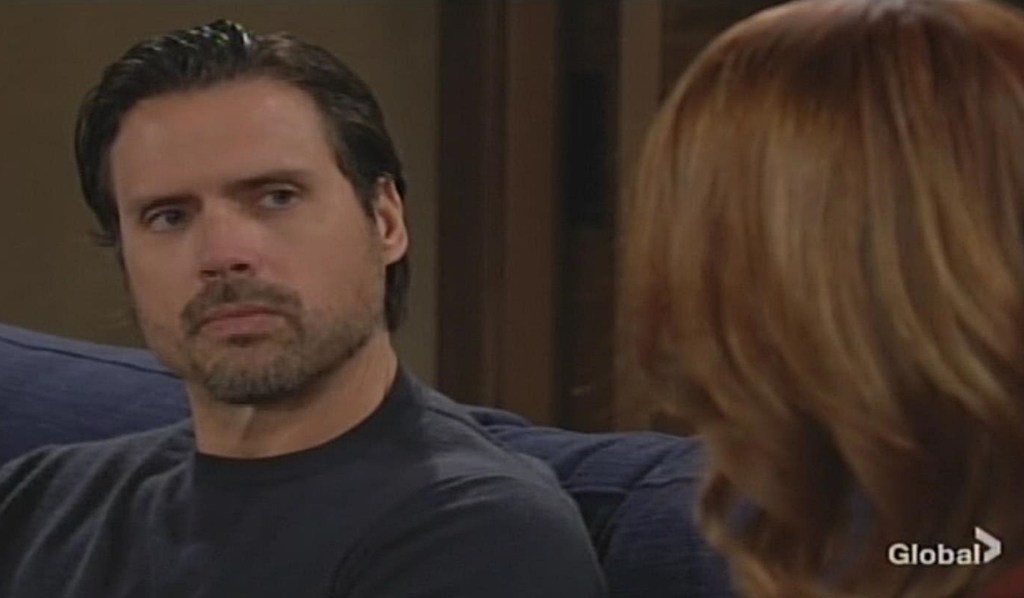 In Las Vegas, Chance joins Adam, who sighs, “For the love of God, Chance.” He warns he’s meeting her alone. Chance can’t walk away now. As they bicker, a waitress plants a listening device and on a chair at their table.

At Nick’s, Phyllis gets a text from the Vegas waitress. ‘We’re all set’.

In the Vegas bar, Chance tells Adam he’s sticking around to ensure this doesn’t go south. Riza, (played by Tina Casciani), appears. Chance warns they need information and asks, “What is she saying?” Riza explains ‘she’ no longer believes the man is in witness protection and is focused on the money he stashed before he disappeared – she’ll stop at nothing to find it. 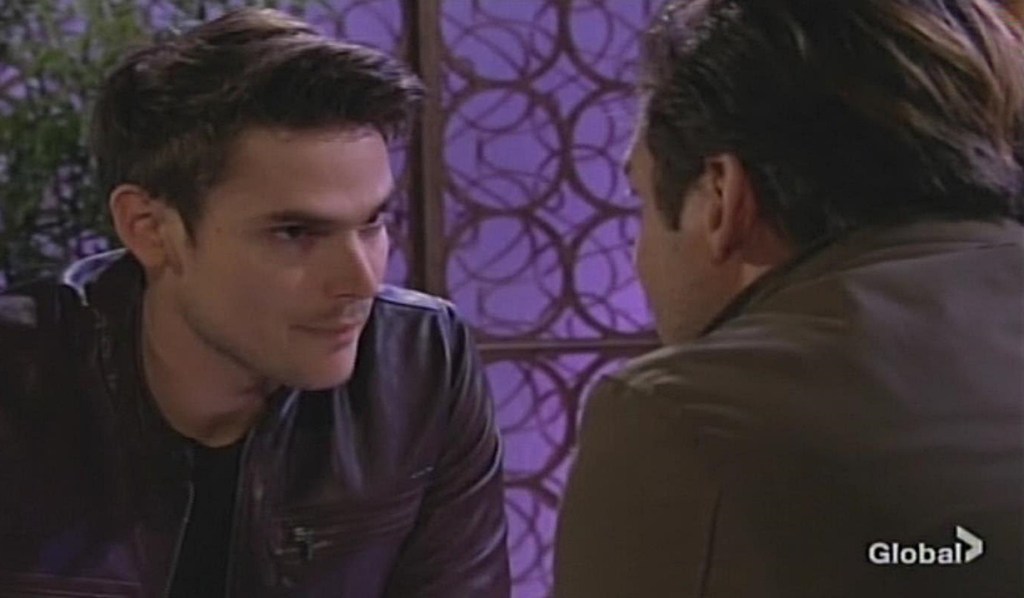 In Grand Phoenix, Phyllis listens to Adam, Chance and Riza in Vegas. She hears Adam offer to transfer enough money to keep her quiet. Chance argues about paying a fortune to make this go away. Adam would pay twice as much to keep himself out of prison. Chance tells Adam he won’t let him go to jail for this – he still has connections. He refers to Adam stopping him from being killed in the line of duty. Adam remarks he was Spider’s only friend besides Riza and let him live his life. He references the woman asking questions about her missing husband and exclaims that he was only trying to scare the guy and never thought he would come at him like that. Chance says, “It was an accident.” Adam feels no one will see it like that, least of all the people Chance worked for. Phyllis says to herself, “Boom.”

Rey joins Sharon at Crimson Lights. She’s feeling fine post-chemo and teases him about hovering. Rey pulls her up against him and expresses his love. They kiss. Nick arrives and Sharon informs him Rey’s already hovering. She leaves and the men tackle the topic of Nick’s daughter and Rey’s sister’s husband. Nick hates that Summer’s involved in this, but she won’t listen to him. Rey thinks she’s as much a victim as Lola and trashes Kyle. They feel for Lola having to see them. Rey hopes they won’t rub her face in it. Talk turns to Sharon’s cancer and Nick thinks Rey needs support as well since he has to be her rock. If he needs someone to talk to, he’s there. They fist bump. Later, Phyllis arrives and Nick thanks her again for her advice – he’s glad she stayed.

Summer joins Kyle at Jabot and they canoodle until she reminds him they’re at work. Kyle teases he never collected on the bet they made about Billy. Summer’s glad they didn’t have sex that night – she wants a forever kind of love with him. They discuss not wanting to hurt Lola more by flaunting their happiness. Summer points out if Kyle’s happy, Lola will feel free to move on with someone else. They know this won’t be easy and discuss their fathers’ warnings. Kyle asks how Summer can be sure he won’t hurt her again. She tells him he’s a part of her; she’s never been more certain of anything. They’re kissing when Jack enters and counsels against rushing. Summer explains this moment has been in the making since they met. Jack recounts their messy history. Kyle concedes their path has never been smooth but feels now is their time. Jack warns them to learn from their mistakes and try to live lives of honesty and kindness – and do right by Lola. 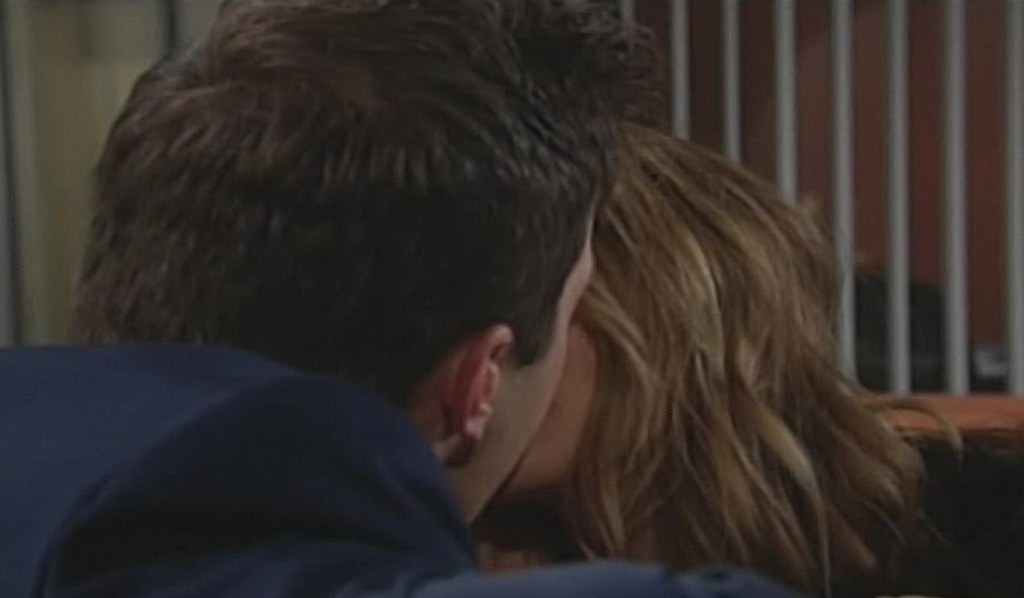 Rey arrives home to find Sharon in distress and tells her to breathe. Sharon explains she felt tired and her stomach wen floppy – it was like a wave pulling her under, but she’s okay now. “I can do this.”

In Vegas, Adam tells Chance, “This is my problem now. I’m doing what has to be done to make this problem go away so I never have to deal with it again.”

Ashley Returns to See Victor Ahead...