Friday February 7, 2020: On Young and the Restless today, Rey insists on staying at Sharon's, and Sharon falls into a series of strange dreams that show her it's okay to lean on her loved ones as she's not facing cancer alone. 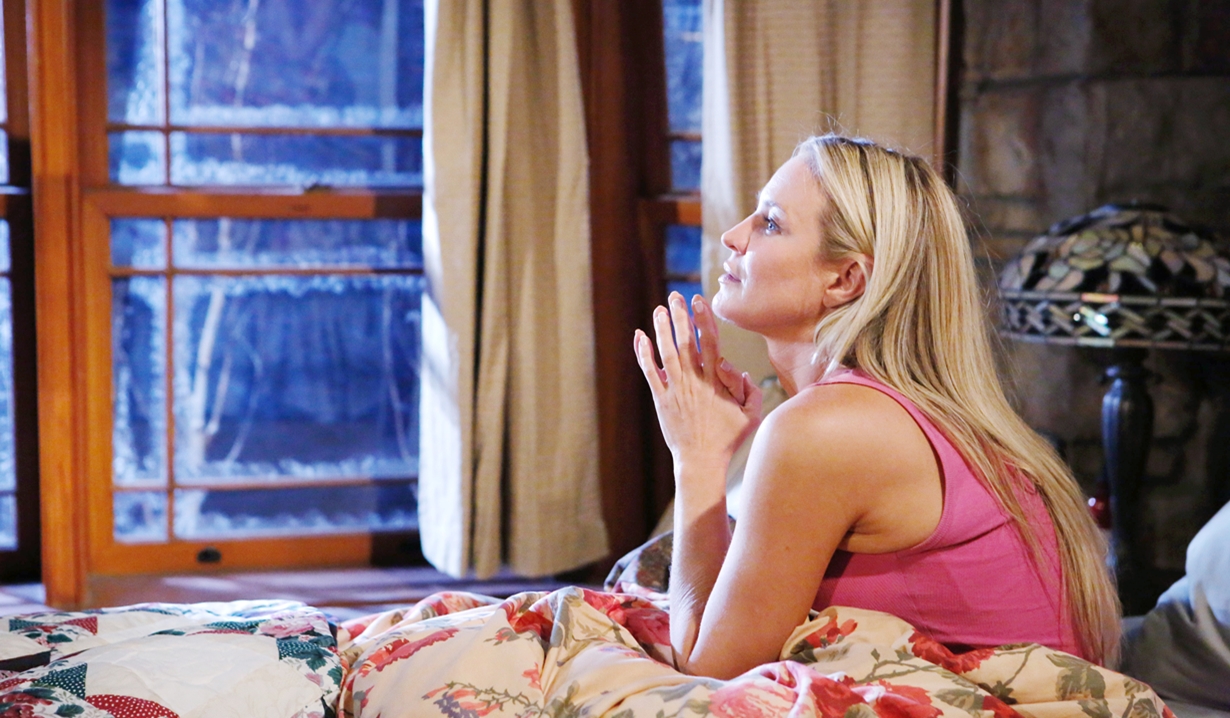 At home, Sharon is cooking chicken soup, macaroni and cheese and lasagna ahead to prepare for chemo. Rey hugs her. Sharon gets encouraging messages from her online support group, some of whom say it may not be so bad. Rey prompts her to talk about what’s in her heart. Sharon’s afraid if she opens up, she’ll scream and won’t be able to stop. Becoming emotional, she says this is the kind of thing that happens to someone else – she keeps expecting to get a call that it’s a mistake. Sharon’s grateful she caught it early, but warns Rey if he touches her, she’ll fall apart. She focuses on packing things to distract her during chemo, admits she’s terrified, and wishes she could go back and not take so many things for granted.

Rey wants to stay at Sharon’s place with her tonight, despite her determination to be independent – he’ll sleep on the couch. He takes her upstairs to tuck her in. Once alone, Sharon struggles to fall asleep. At some point, she thinks Mariah’s standing beside the bed, but it’s Cassie. Sharon marvels that she always knows when she needs her. Cassie says, “I need you to come with me.” She reaches for her hand and wants to show her mom how strong she is. Sharon tells Cassie to go away; she’s not ready for this. Cassie disappears. 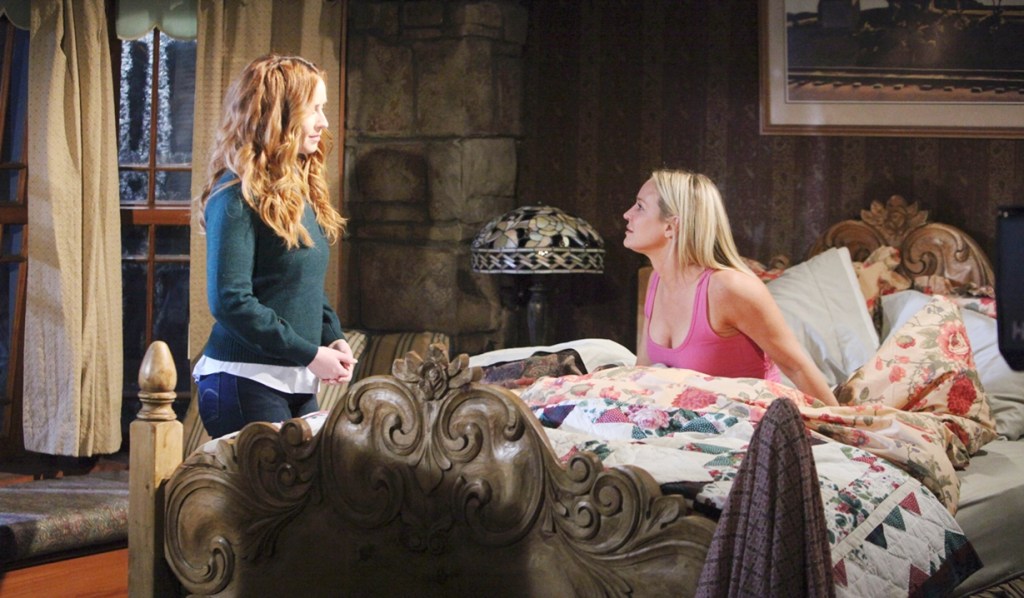 Still in a dream, Sharon runs downstairs. Rey’s not there and the door’s open. Suddenly, she’s in Crimson Lights, where Mariah is serving coffee and informs her Rey moved back to Miami. Phyllis appears in a black dress and says no man wants to be with a woman riddled with cancer. Sharon says she still has Mariah, but Mariah announces she’s going on tour – she pushed her away after her diagnosis. Sharon shouts, “I need you, please don’t go!” Phyllis taunts Sharon as a nurse wheels in a chemo unit. Nick appears to give Phyllis the night of her dreams. Sharon gasps as they exit, “I can’t go through this alone.” Sharon awakens as Cassie reappears and says she doesn’t have to be afraid; she will never be alone.

Downstairs on the sofa, Rey hears Mariah arrive. He turns on the light and explains why he’s there. Mariah hopes Sharon is fast asleep and having the best dream ever.

Upstairs, Sharon dreams she goes downstairs and sees an operating room with a surgery underway. Mariah narrates, “This is the day that Sharon Newman’s life changed forever.” She’s hosting a talk show with Rey, Nick and Phyllis as her guests – the people that knew Sharon best. Sharon protests as Rey and Phyllis discuss how Sharon changed after the surgery, and Nick explains the changes in Sharon after her cancer treatment hit her children the hardest. Phyllis doesn’t understand why she put herself and her family through this to get a little extra time. Sharon frantically wonders if the treatment failed or if she made a mistake. As Mariah wraps up the segment, Sharon sees herself flatline in the dream OR – she screams at herself to fight and hollers at the doctors not to leave her there alone! 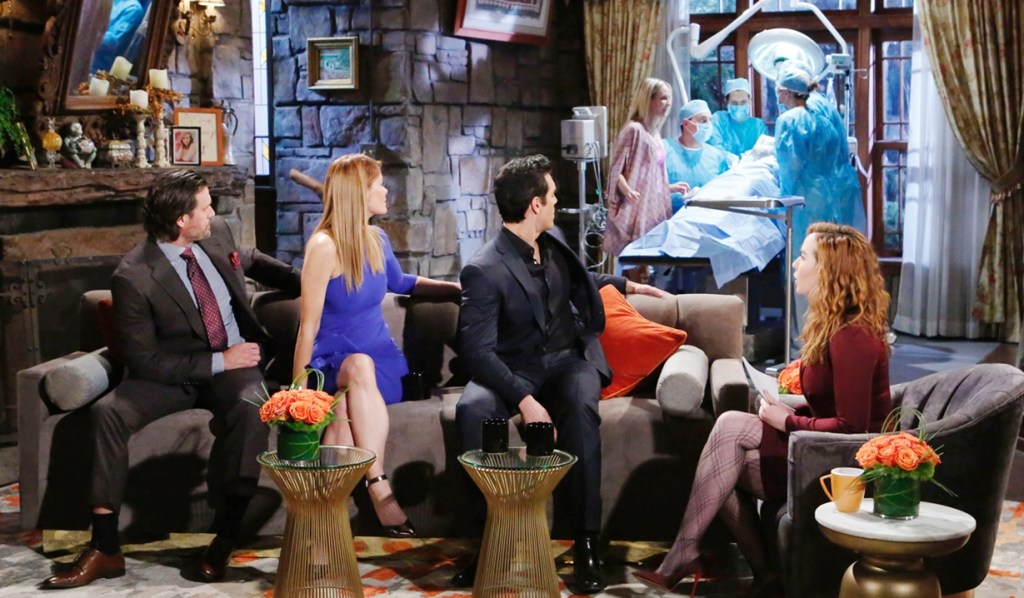 Still dreaming, Sharon enters the Grand Phoenix, not sure why she’s there. Phyllis escorts her to radiation therapy. Sharon says she doesn’t need it as Rey appears with pills and Mariah appears with a cane. She can’t understand why they’re treating her like this. Mariah holds up a mirror and she’s wearing a headscarf. Faith runs in crying, and Cassie says, “Mom, it’s time. It’s time to go home. Please don’t be afraid.”

Sharon awakens in her bedroom and goes downstairs to hear Mariah and Rey discussing how strong she is – they just wish she’d stop shutting them out. Sharon emerges and tells them about her dream that Cassie came to take her home – to this home. She’s felt isolated, but she has them. They all hug. Sharon agrees to let them know what she needs – she’s hungry. They set the table and Nick and Faith join them. Sharon feels like the luckiest woman in the world. After, Sharon sleeps with Faith on one side and Mariah on the other. Cassie watches over them. 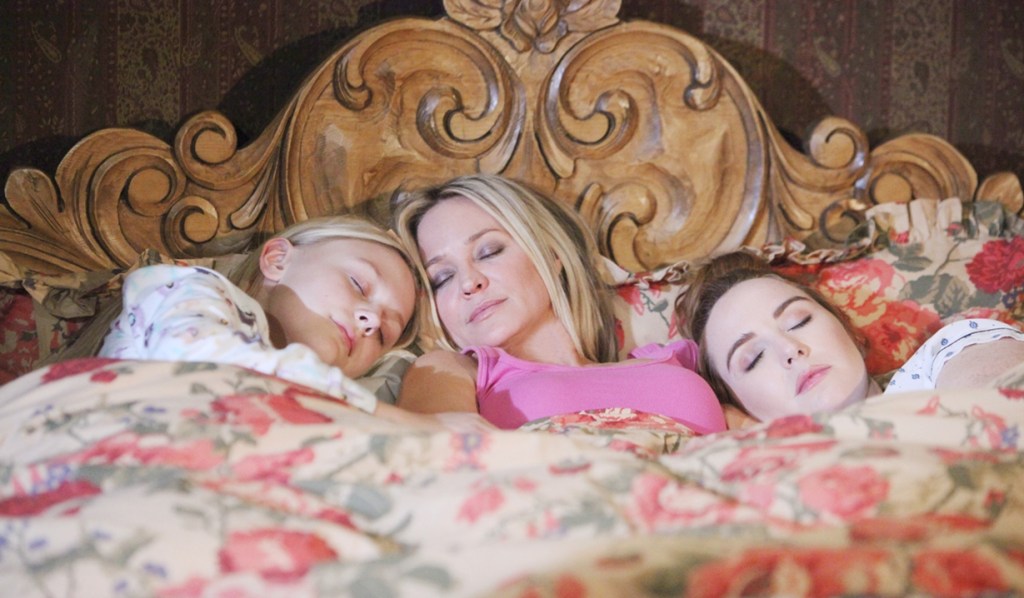 Nick and Phyllis worry about Summer.

<p>Rey tells Sharon he’ll sleep on the couch so he’s there in case she needs anything as she prepares for her first chemo treatment. Despite her insistence she doesn’t need help, he wants to be close by. After, he tucks her into bed.</p>

<p>Sharon struggles to fall asleep the night before her first treatment. At some point, she sees Cassie at her bedside. Cassie reaches for her mother’s hand and Sharon panics, thinking she’s dying. She’s not ready!</p>

<p>Sharon dreams she’s in the coffeehouse undergoing a chemo treatment. Phyllis is taunting her. Nick shows up to take Phyllis on the hot date of her dreams. Sharon doesn’t want them to leave her alone.</p> <p> </p>

<p>Mariah arrives at the house late at night and Rey reveals himself by turning on the light. He explains why he stayed to sleep on the couch. Mariah and Rey get to talking about how strong Sharon’s been, but wish she’d let them help her more.</p> <p> </p>

<p>Sharon dreams Mariah’s hosting a talk show in her living room. Phyllis, Rey, and Nick are guests who are there to discuss how Sharon changed after her diagnosis and a traumatic surgery. Sharon protests, and tries to understand, but goes unseen and unheard.</p>

<p>Sharon dreams there is an operating room in her living room. She realizes she is the patient on the table. When she sees herself flatline, she screams at the doctors to do something and not to leave her there.</p> <p> </p>

<p>Sharon dreams she’s undergoing a chemo treatment at the Grand Phoenix. Cassie looks on as Rey, Faith, and Mariah relay to Sharon how dire her circumstances have become. </p> <p> </p>

<p>After awakening from her dreams, Sharon’s realized it’s okay for her to lean on her loved ones as she faces cancer. Nick and Faith arrive to join her, Rey and Mariah for a meal.</p> <p> </p>

<p>After Sharon’s dreams are over with, and she’s shared a meal with Nick, Faith, Rey and Mariah, it’s time to sleep before her treatment. Faith and Mariah cuddle with her as they all fall asleep together and Cassie watches over them.</p>

Kyle and Summer Have Sex As Mariah...

Theo Refuses Sex With Lola After She...