Kyle Decks Theo at Society, Then Walks Out on Lola

Monday January 20, 2020: On Young and the Restless today, Phyllis sabotages Abby's date, Rey tries to keep Sharon's spirits up, and Mariah gets an amazing surprise. 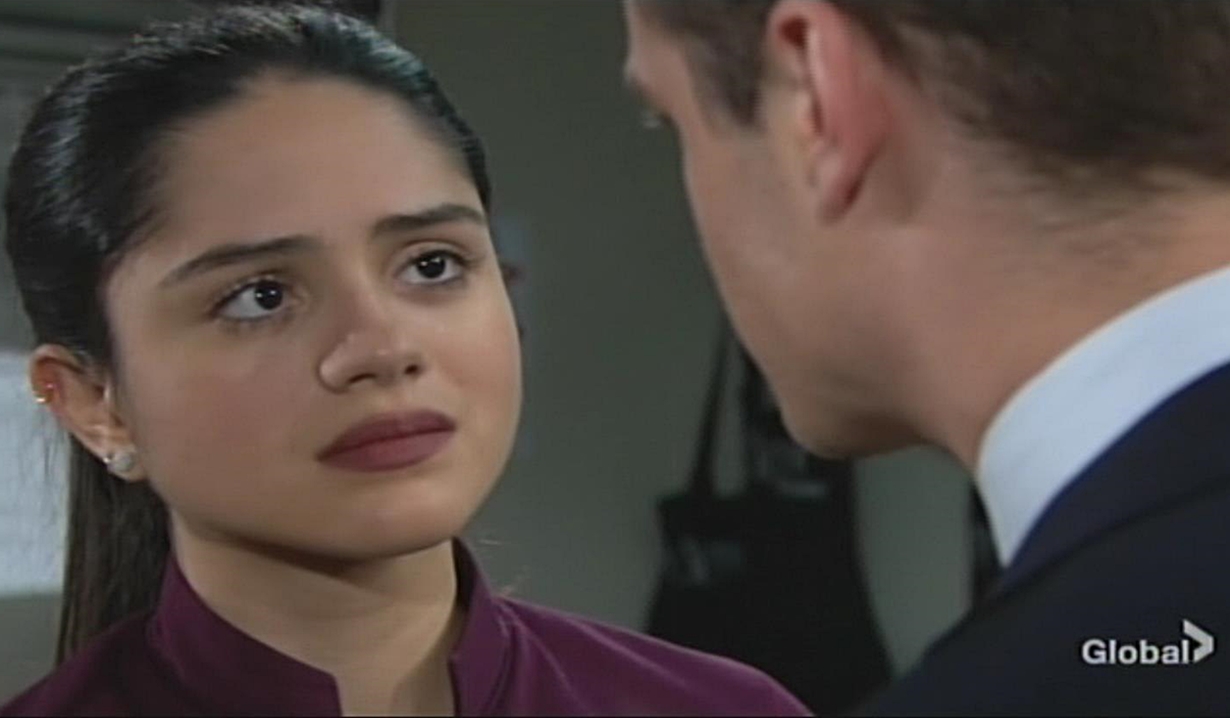 Abby arrives at Grand Phoenix all dressed up. Phyllis spots her and snarks she’s overdressed, then learns she has a date with Chance. Abby calls her out for trailing Chance like a puppy and says she’s not intimidated by her. Chance arrives and Phyllis mocks them. She smirks as they leave for their date. When they return soon because their reservations were canceled, Phyllis is needles them some more before leaving. Abby and Chance get close. 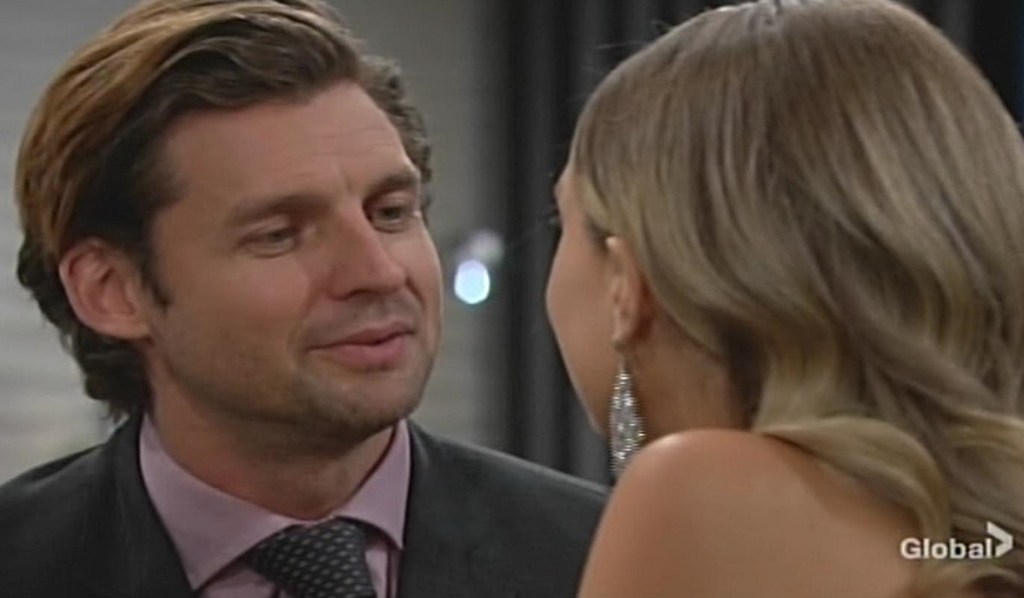 At Society, Summer and Lola bicker about Jabot’s business dinner as Theo arrives. Jack and Kyle follow and watch as Theo gets Lola smiling. Theo’s jovial and Kyle’s tense. Lola calls Summer to the kitchen and says, “We have a problem.” Lola explains the electricity’s off and they’re on a generator – she can’t cook. Summer panics until Lola thinks of bringing her food truck. Summer decides they can spin it and have dessert outside. Meanwhile, Kyle and Theo argue about their management styles as Jack greets Jill, then introduces her to Theo. She tells him she was fond of his grandfather and takes him off to hear stories. Jack warns Kyle it’s high time he accepted Theo’s in the family. Later, Jill watches Theo tick Kyle off and tells Jack that Theo’s dangerous…in a good way. After everyone’s eaten, Summer and Lola congratulate themselves on saving the party. Jack introduces Kyle on the stage. He thanks Summer, then, through gritted teeth, Theo. Kyle sees Theo head to the kitchen and follows. He hears Theo telling Lola she’s an amazing woman and decks him. Lola helps Theo up and hollers, “What the hell is wrong with you?” at Kyle. Theo exits and tells Summer Kyle lost it for no reason – he and Lola are friends and he hasn’t crossed any lines. Summer wonders how far he’ll take it. Theo goes. In the kitchen, Kyle thinks Lola’s oblivious to Theo’s manipulation. Lola feels he’s choosing to see the worst in him. She thinks Kyle sees him differently because he’s not a blueblood – he could never see his point of view. Kyle fumes, “Oh, but you can.” Lola reminds him she doesn’t act like this over Summer because she trusts him. Kyle insists it’s different – Theo’s playing her and she’s doing nothing to discourage him. He walks out.

At Sharon’s place, Rey makes popcorn and they snuggle up. Sharon’s mind is working overtime so Rey suggests playing cards. Sharon beats him at Gin Rummy, then thanks him for making her laugh. Soon, her mind is racing again. Rey goes to get Faith to cheer her up.

At Mariah’s place, she tries unsuccessfully to reach Tessa, then gets a text from her that something is being delivered. She answers the door – it’s Tessa. Mariah gasps, “Oh my God!” and embraces her. Tessa only has a couple of hours, so they’ll make the most of them. They kiss. After lovemaking, Mariah tells Tessa her surprise was exactly what she needed. Tessa asks what’s going on. Mariah isn’t sure it’s her information to share. Tessa asks if it’s serious. Mariah shakes her head – it will be fine; they’ll discuss it when she’s home again. Tessa isn’t sure when that will be. Mariah ruminates about people who love you sometimes leaving, and Tessa assures her that’s crazy talk. They decide to eat while Tessa talks about the tour, but she learns it’s time to go. They say goodbye and Mariah leans on the door. 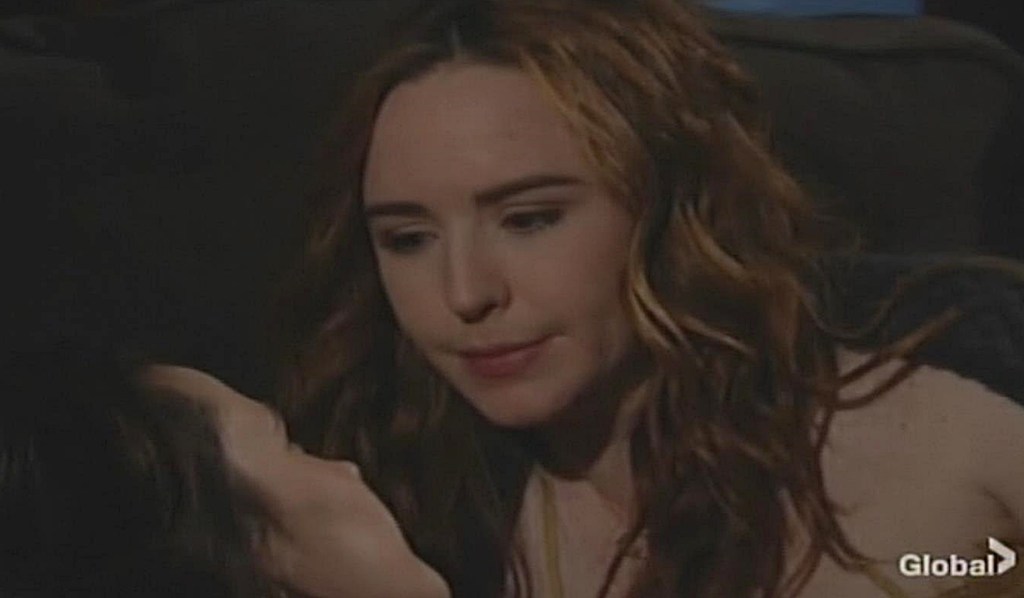 At Crimson Lights, Chance tells Abby that Genoa City’s always been a special place for him. She understands. Chance plays the jukebox and they dance.

At Grand Phoenix, Chance takes Abby to his suite for a nightcap. Phyllis arrives in time to see them get into the elevator. Soon, Abby and Chance are back in the lobby after the fire alarm was pulled. Phyllis appears in a robe. Chance mentions if someone pulled the alarm his security system would put blue dye on them. Phyllis flashes Chance to show she’s clean and purrs, “I hope your night with Abby wasn’t spoiled.” Abby has to deal with the false alarm so she and Chance call it a night. Once alone, Phyllis pulls gloves covered in blue dye from her pocket.

Fen takes his parents by surprise.

Young and Restless Pre-Empted As...