Nick and Chelsea Experience Tension at the Newman Thanksgiving Dinner

Friday November 29, 2019: On Young and the Restless today, Nate defends Amanda to Elena, Adam spends Thanksgiving with Phyllis, and Thanksgiving is celebrated at the ranch and Crimson Lights. 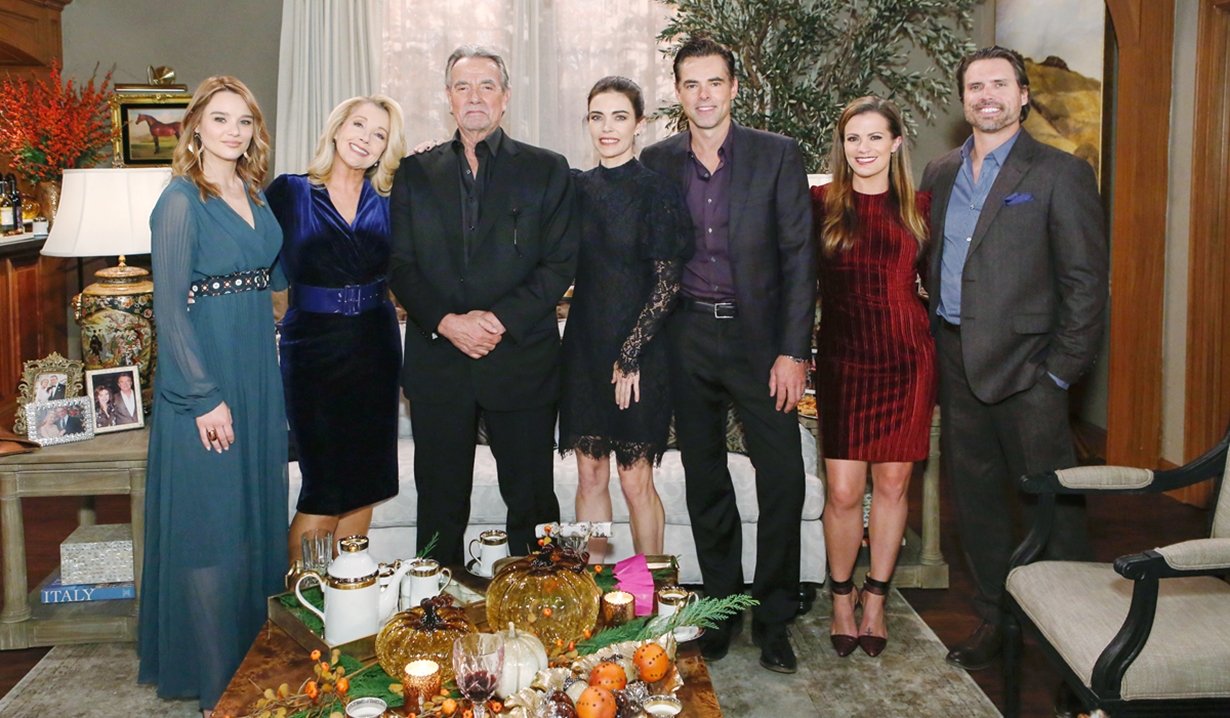 At Nick’s place, he works to convince Summer to spend Thanksgiving at the ranch. She’ll stop by but is planning a chill holiday with Theo. Summer asks if Chelsea will be at the ranch. Nick’s uncertain and thinks Adam’s using Connor’s situation to his advantage – he won’t let him get away with it.

At the penthouse, Chelsea wants to take Connor to the ranch, but Adam’s opposed to it. Chelsea’s determined. Later, Phyllis drops in on Adam with Chinese food, Adam wants an apology for her barging in when Chance was there. Phyllis is unfazed. She feels bad for Adam, being treated like an outcast. Adam swigs a drink and asks if Summer’s at the ranch too. Phyllis relays she’s with her boyfriend. Throughout the meal, Phyllis holds forth about everyone letting Chelsea off easy and investigating her instead. Adam needles about her security software. 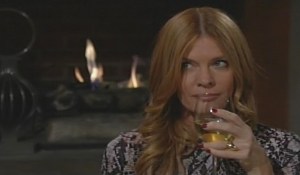 Phyllis admits Simon Black scuppered her plans. It’s Thanksgiving and she’s grateful Adam’s still alive and kicking. Adam asks, “What are you up to?” She insists she’s merely on a mission of mercy, and talk turns to Adam being out of the scheming game. Phyllis announces she is too. Adam admits he can think of worse ways to spend a holiday and Phyllis feels that’s sweet. After dinner, they toast to deserving to get what they want.

At Crimson Lights, Rey tells Sharon that Chloe and Kevin dropped off food. Sharon’s encouraged, and is happy to have something to focus on with the kids away this Thanksgiving. Mariah arrives. Sharon wasn’t expecting her and is thrilled. Elena and Nate arrive to help, they’re on a break from work. Elena and Mariah are teasing him about dating as Amanda enters. After, Sharon is happy that Amanda wants to help out and Nate jokes her apron is a good look on her. He’s thankful he gets to keep doing what he loves and thanks her for that. Nate asks about her family. She says they’re not close. Mariah does a double take when Amanda takes up a spot beside her dishing up food. Nearby, Lola chats with Elena, who says Amanda’s a snake. A little later, Lola and Rey get pie photos from their mom, as well as baby pictures. Rey watches Sharon talking to a homeless person and declines Lola’s invite to the Abbotts – they’re looking forward to quiet time. On the patio, Mariah reminds Kyle to count his blessings not his problems. He says she’s right and glances at his wife – he has a lot of blessings. Inside, Rey makes Amanda’s acquaintance and Nate seems glad to see her interacting. 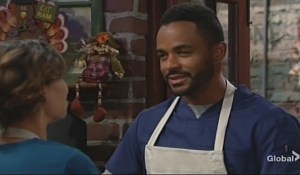 He advises Elena that she’s thinking of staying in town. Elena’s outraged and insists she’s playing Nate. She doffs her apron and leaves. Mariah tells Sharon how proud she is of her as she leaves, and Nate offers Amanda his real estate agent’s name. She gives him her new number and alludes to annoying calls she was getting. Once alone, Sharon and Rey discuss the inspiring day. Rey credits Sharon for the true spirit of generosity in the room. They slow dance.

At the ranch, Nikki and Victor prepare dinner and discuss Abby joining Ashley since Dina will be home for the day. Victor hopes to see Connor. Nikki feels it will ultimately depend on Chelsea. Victoria and Billy arrive – the kids are at the stables – and Victor alludes to Billy leaving his job. 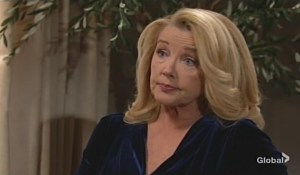 Billy jokes he’s taking after him. Victoria apologizes to Billy afterward. Nick and Chelsea arrive – the boys are with Johnny and Katie. Nikki broaches the idea of a Switzerland trip to the group. Awkwardness ensues with Chelsea and Nick. They leave the room and Victoria, Billy, and Nikki discuss the tension surrounding Chelsea staying with Adam. Later, Summer arrives in time for dessert and is supportive toward Chelsea. By the bar, Nikki tells Nick that Victor’s priorities have shifted for the better. Victor appears and embraces Summer, who has ‘mostly’ forgiven him. 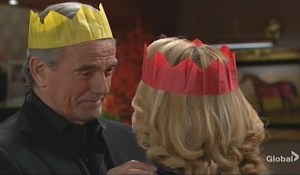 After Summer goes, Nikki wants to hear what they’re all most thankful for – she mentions Victor’s health, Victoria is grateful for her parents and Billy, Billy’s glad to have his family back, and Nick seconds that. Chelsea thanks Nick for having her back. Victor is grateful for all the healing this year, both physical and emotional, and talks about the grandchildren – he hopes those who are away will soon find their way home. The couples kiss, but not Nick and Chelsea. Once alone, Victor and Nikki canoodle, flush with happiness at having been with the ones they love.

At the penthouse, Adam learns Connor had fun and thinks Chelsea made the right call. She spots two wine glasses. Adam relays he and Phyllis had Chinese food. Chelsea know she’s up to no good with the security system, and tells Adam she’ll stay. She glances at the glasses again, then turns in.