Monday November 11, 2019: On Young and the Restless today, Cane and Chance have it out, Adam asks Victor for a favor, and Nick tells his father he's running for office. 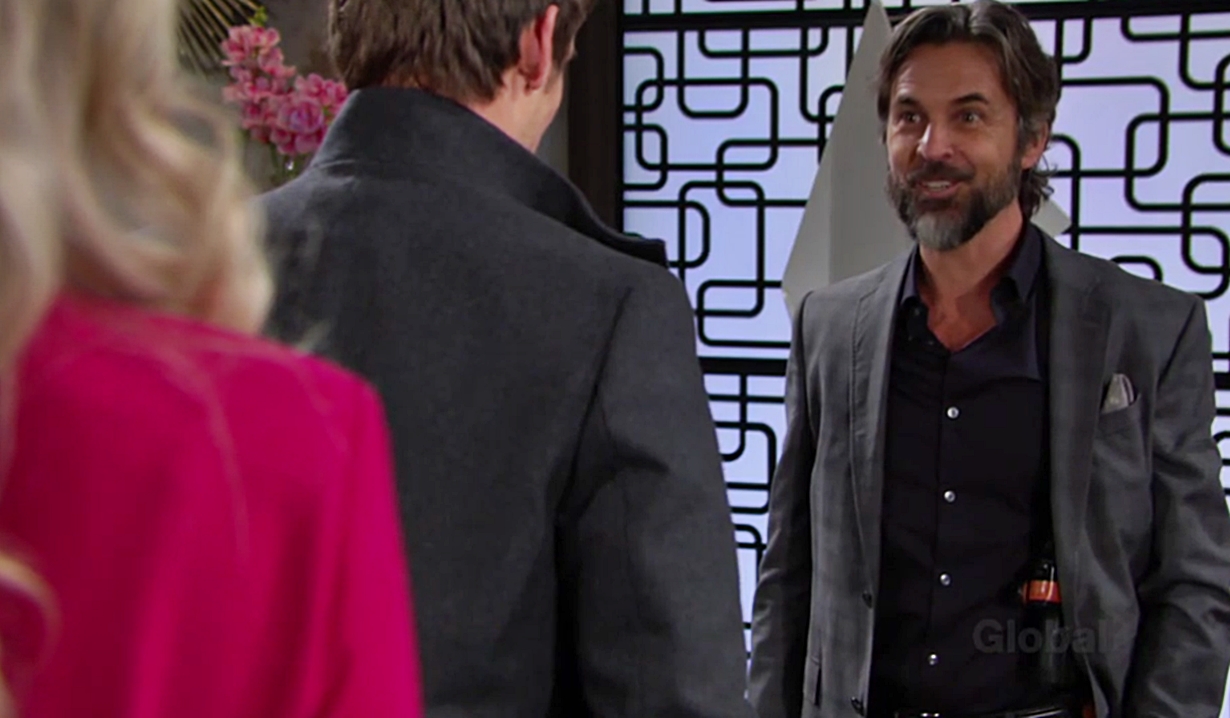 Nick arrives at the Grand Phoenix and greets Nikki, who chastises him for not telling his father he’s running yet. Nick doesn’t want to hear it’s a waste of his time, but will talk to him. Elsewhere, Abby talks to Chelsea, who’s distracted. Abby wonders if she’s looking for Mr. Black – she’s been acting weird since he came. Chelsea makes an excuse not to talk to Nick and rushes off. Upstairs, Cane wants to know what Chance is so pissed off about. 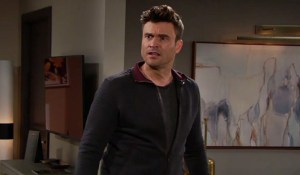 Chance rants that Cane screwed Devon out of $2 billion dollars and claims he’s never met Amanda Sinclair, the woman supposedly representing him, in his life. He wants answers. Cane shouts that he doesn’t have the facts and fills him in. Chance and Cane argue until Cane admits Jill thinks Colin may have found the forgeries. He questions where Chance has been all this time.

Victor’s surprised to see Adam at the ranch. Adam needs a favor – he wants to take Connor to the farm and Victor owns it now. 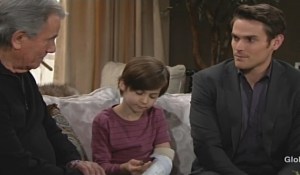 Victor learns it was Chelsea’s idea and is a little amazed she’d allow him to take the boy out-of-state. Adam says they’ve worked through their trust issues. Victor thinks the farm would be good for Connor, who runs in. Victor tells the boy where to find his initials on the elm tree and offers him his pocketknife to add theirs. While Victor gets the knife, Adam explains to Connor that Chelsea can’t come with them, but agrees to stop and ask her. Victor tells Adam to enjoy the trip with his boy.

More: Justin Sylvester to guest on Young and Restless

At the Grand Phoenix, Abby wishes Nick luck with the debate; she’s sure Chelsea will show up. Meanwhile, Simon enters. Upstairs, Chance explains he returned to solve a case and won’t apologize to Cane until he finds out he’s clean. Chance’s phone dings – he’s about to complete his mission. His text says the subject is inside the hotel. Elsewhere, Chelsea calls Anita to wire her the $1 million she gave her – she and Connor are in danger. Downstairs, an agent gets a text from Chance to keep eyes on the subject, they’ll grab him when he exits. In the lobby, Phyllis joins Abby and Nick, who invites her to the debate. She declines. Nick walks off and Simon stops him to chat briefly. 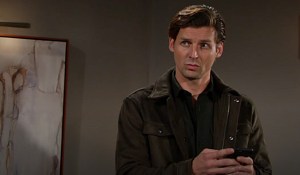 In Phyllis’ suite, she assures Abby their servers are secured. Abby wants to look on Phyllis’ computer, but the redhead grabs it. She shows her some features and accuses Abby of wanting to keep her away from Nick. Abby warns, “Cross the line, Phyllis, and see what happens.” After, Phyllis runs into Amanda in the corridor. Amanda opens her door and Phyllis recognizes Chance, who says to Amanda, “You must be my lawyer.” He wants them out as he’s doing a sting operation. Phyllis wants to protect her guests but Chance reassures her. The agent sends him a photo of Simon. Downstairs, Chelsea’s rattled when Adam and Connor arrive. She stresses they need to go…now. Adam sends Connor away and asks Chelsea wants going on. Simon approaches wanting to talk business with Chelsea. Adam snarls that it can wait. Simon glances at the agent at the bar and realizes he has a gun. Nearby, Adam is demanding from Chelsea if Connor’s in danger, when Simon walks up and pulls her away. 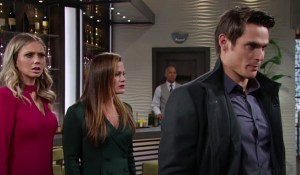 Adam tells him to stay away from her. Simon shows his gun and wants everyone out but Chelsea, Abby and Connor. Adam says he’ll have to shoot him before he’ll leave without his family. Upstairs, Chance advises Amanda to do her due diligence next time and stalks out with Phyllis behind him. He gets a text and Phyllis takes him to the surveillance equipment in her room. Downstairs, Abby ushers out the guests and locks the door. She stands near the bar panic button as Simon blames Chelsea for the unfortunate situation – he’ll have to figure out a way to resolve this.

At the ranch, Nick and Victor catch up before talk turns to Nick running for office. Victor always hoped he would aim higher. Nick wants him to be proud even if he goes out on his own, and asks if his dad is okay with being disappointed from time-to-time. Victor knows he won’t always take his advice, but he will always be honest. Nick’s about to leave when Victor relays Chelsea told Adam to take Connor to the farm. Nikki arrives and Nick has to take care of something. Victor tells Nikki he hopes Nick kicks his opponent’s butt. Nick leaves Chelsea a message wanting to talk from the door.

Relive The Young and the Restless at this time in 2009 when Chance was stabbed at Crimson Lights, Cane sat vigil as Lily was admitted to the hospital, and Billy’s article caused a scandal.

Chance Kicks in Amanda’s Door and...

Chance Drops Onto Simon’s Head to...