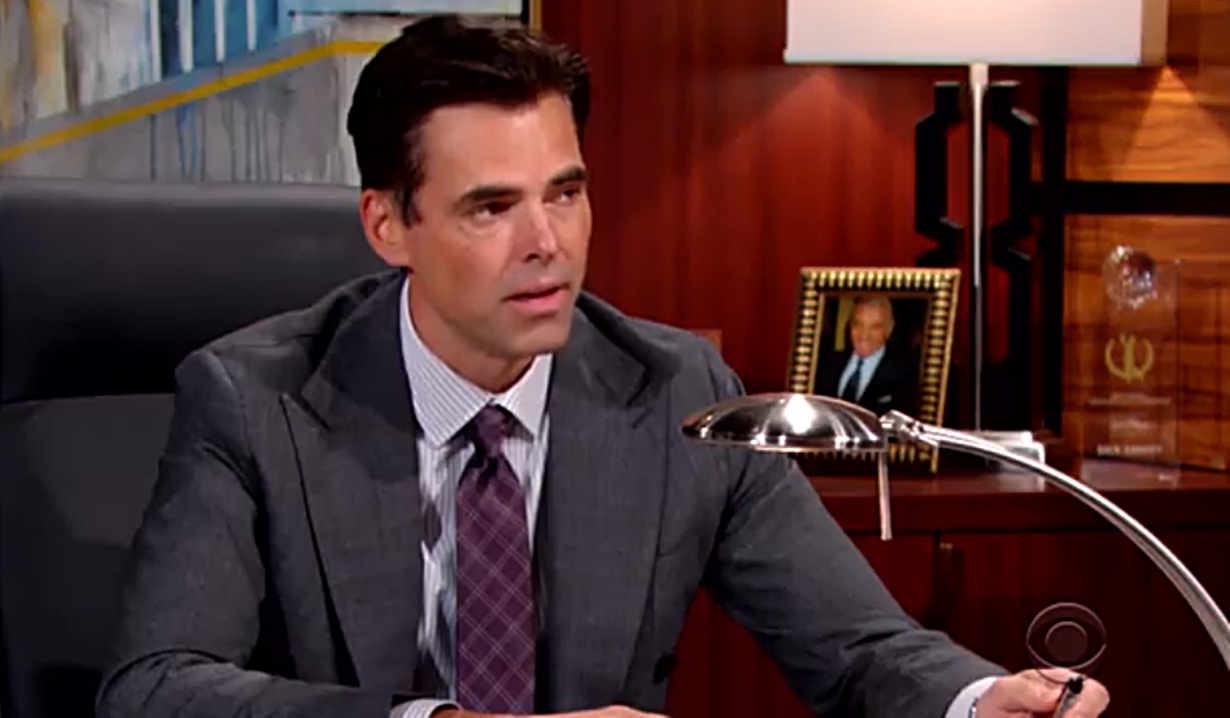 At Society, Jack runs into Nikki. They discuss advising Nicholas on his campaign and they tease each other about their political past. Talk turns to Victor’s fake death and Nikki apologizes. Jack admits to an odd sense of relief when he heard Victor was alive and is sorry what was revealed about Adam. Nikki asks about Billy and the family and urges Jack to open up. She reveals she knows about Theo Vanderway. 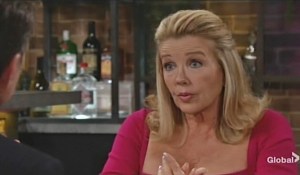 Jack explains the news has been tough on Kyle due to his past with Theo. Jack worries about respecting his son’s feelings while welcoming Theo into the fold. Nikki wonders what Theo feels. Jack isn’t sure, but recaps that his father was a baby Dina had with Stuart Brooks and gave up for adoption. Nikki learns Theo asked to meet Dina and it was a powerful interaction.

Billy and Victoria arrive in her office and start kissing. Billy reveals he’s spoken to Jill who informed him Katherine’s will was fraudulent and Devon gave Cane his money. Victoria feels he can’t blame Cane, but Billy thinks he’s conning Devon somehow. Victoria cautions him about getting angry over it. Billy croons that she lowers his blood pressure and they kiss until Victoria shoos him out to get to work. Later, Nikki talks real estate with Victoria, who’s distracted. She confides that Billy was upset about Katherine’s will. Nikki’s shocked to hear the details. Victoria’s worried the news triggered Billy’s pent-up frustration. Nikki advises her not to ignore her gut. She knows Billy drove the car that tried to hit Adam. Victoria shares he had a break from reality but has taken steps to heal. Nikki isn’t sure she should shrug off her concerns.

At Crimson Lights, Theo’s on the phone with someone he thinks would be a perfect fit for his agency but learns they want to give a bigger place a try. Discouraged, he pulls out his dad’s pocket watch and says, “You know, Dad, nothing comes easy.” Jack calls and Theo pretends to check his schedule before agreeing to meet him at Society. 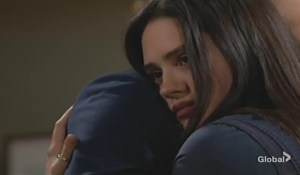 At home, Kyle has a tray of breakfast with a flower for Lola. They make up but she suggests he give the apology flower to Theo. They rehash Theo showing up in Genoa City with an agenda and trying to drive a wedge between them. Lola wants him to keep an open mind. Kyle hopes she’s right that they can turn a corner but he’s doubtful.

Theo joins Jack at Society and mentions the ‘Kylephant’ that was in the room last night. Jack concedes the family fights, but they always show up. He wants to know Theo, who remarks it still doesn’t seem real. Jack wants to help and tells him about his grandfather, Stuart Brooks. Theo feels he’s more like Dina. Jack chuckles; he could tell him stories for days. Lola sees them and smiles. Jack expounds on Dina’s restlessness, how she left them, and her ensuing success. He hands over a file containing information on the various family members and his father’s adoption papers. Jack tells Theo his door’s always open…when he’s ready. Lola joins Theo as he’s reading. Theo addresses Kyle’s anger and thinks he has a problem with him being around her. Lola can make her own decisions about people. Theo feels Kyle doesn’t think he’s good enough due to their backgrounds, though Lola disagrees. They bond over hustling for everything they’ve got. Theo’s impressed by her. Lola advises him to be himself and show the Abbotts who he really is. After, Theo reads about the Jabot merger.

At Jabot, Billy lets Kyle know he has his sympathies regarding Theo – he’s suspicious too. He wonders if Theo targeted Kyle in New York. Kyle doubts he could have planned any of this. Billy advises him to keep his guard up nonetheless. Billy recalls Cane’s past con and rants that now he’s doing it again. Kyle’s less worried about Theo – he knows exactly who he is. Billy suggests he keep his distance from him and try to get through to Jack so Theo can’t take advantage…like Cane. Billy doesn’t trust Theo, but Kyle sees him more as a nuisance. Billy feels that’s a mistake – he’s a threat. Once alone, Billy pulls out a stick of gum from the drawer, then throws it away.

Devon has unsettling news when he returns.

Simon Threatens Connor to Chelsea As...

Chance Kicks in Amanda’s Door and...